Writing this post seems a bit like carrying coals to Newcastle, for I know most readers here are avid, well, readers—of books, that is. I’ve gotten a lot of useful tips from readers, and the knowledge of books evinced in the comments is impressive. Nevertheless, I liked the article by Ross Barkan below, who says he reads 40-50 books a year (I estimate I read about 25—two per month).

Now we’ve all heard that the average American reads about one book a year. According to a recent Gallup poll, though, that ain’t true.  Although Americans are self-reported to be reading fewer books over the years, they still average 12.6 books per year. Below is the average plotted over the past 32 years, which reached a peak of nearly 19 books per year in 1999 and now is at a low of 12.6.

But I don’t believe the data, which I think give estimates that are too high. It’s based on self report, and of course people want to make themselves look bookish, and it includes as a “book” parts of a book!

The results are based on a Dec. 1-16 Gallup poll, which updated a trend question on book reading. The question asks Americans to say how many books they “read, either all or part of the way through” in the past year. Interviewers are instructed to include all forms of books, including printed books but also electronic books and audiobooks, when entering the respondent’s answer.

They also count audiobooks, so if you listen to a book, even part of it, it counts as a whole book. I do have friends who read a lot of books, but I’ll be a monkey’s uncle if the average American—not college students or intellectuals—reads more than a book a month. 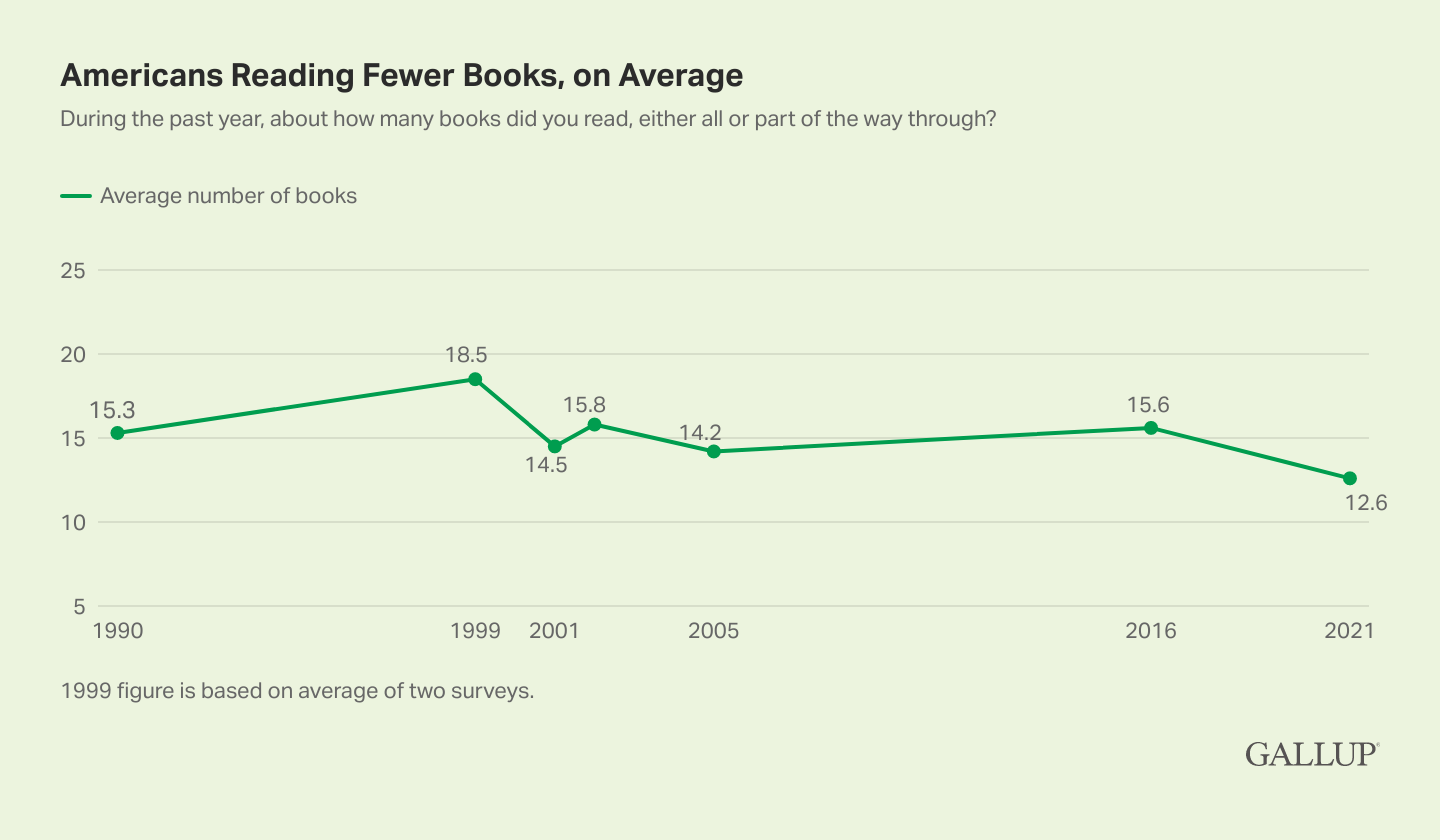 Below are the data showing the variation. As Gallup reports:

The decline in book reading is mostly a function of how many books readers are reading, as opposed to fewer Americans reading any books. The 17% of U.S. adults who say they did not read any books in the past year is similar to the 16% to 18% measured in 2002 to 2016 surveys, though it is higher than in the 1999 to 2001 polls.

It baffles me that some people can read no books. What do you do on a long plane or train ride, or in the evening if you don’t watch t.v.? 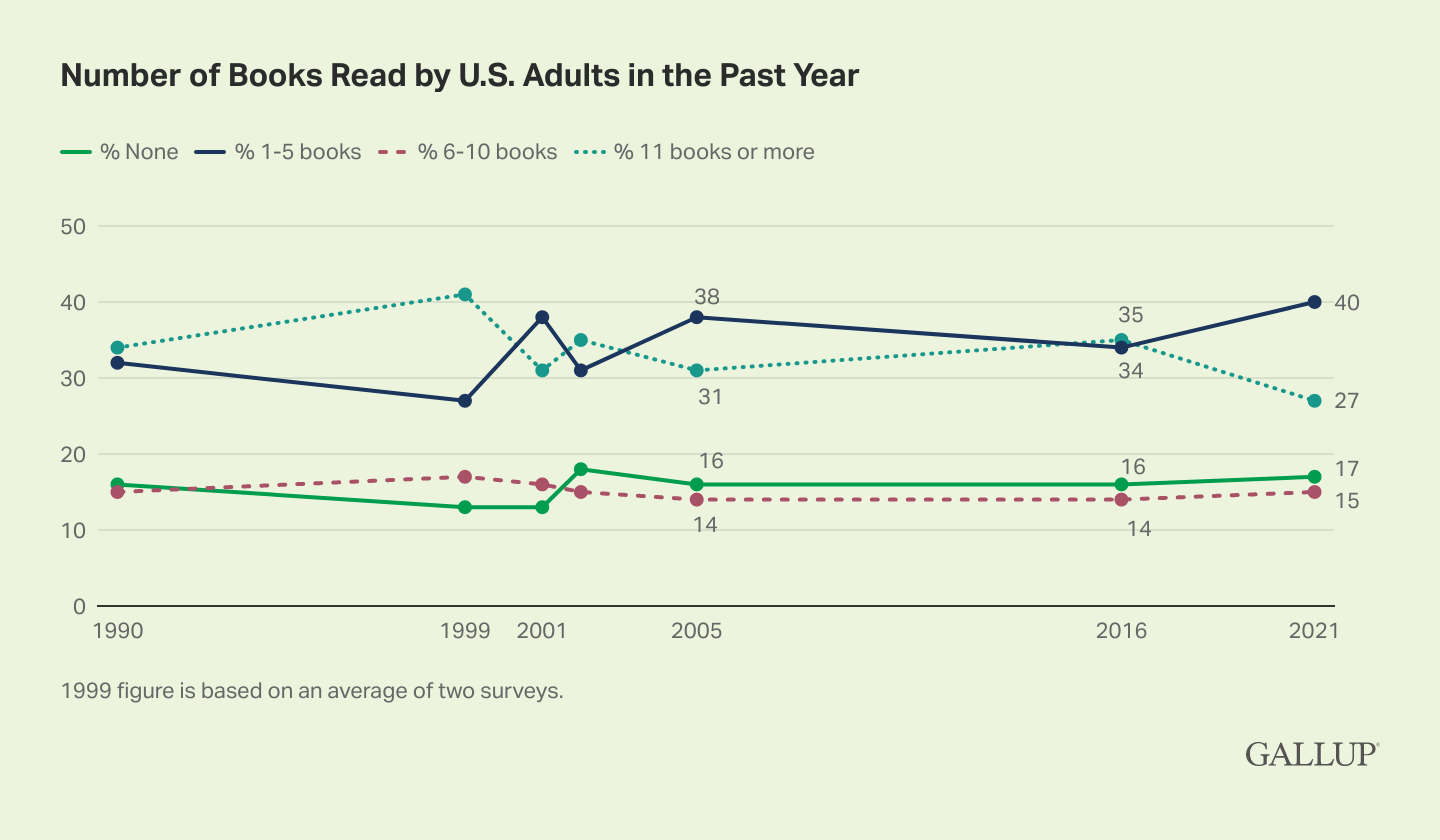 Finally, by age class, gender, and education.  College students, women, and older people are those who reduced their reading in the last 20 years.

Why the change? I would have thought that readership increased during the pandemic, but maybe people were into watching their “devices” or turning on the tube. Gallup doesn’t know, either:

The new data on book reading reinforce that the popularity of reading is waning, with Americans reading an average of three fewer books last year than they did five years ago and had typically read for the past three decades. The decline is not because fewer Americans are reading at all — a percentage that has held steady at 17% — but because Americans who do read are reading fewer books. The changes are especially pronounced among the most voracious book readers, namely, college graduates, women and older Americans.

I always find reading a great pleasure, though my time is limited given this website and, lately, insomnia, which makes it hard to concentrate after a bad night.  The reason people should read is the object of this short article on Ross Barkan’s Substack, “Political Currents”. Barkan is listed as “a contributor to the Nation and a Guardian columnist. He is the author of three books, including the novel The Night Burns Bright and The Prince: Andrew Cuomo, Coronavirus, and the Fall of New York.” And that’s all I know about him. He does mount a decent defense of reading, though, without seeming snobbish about it. Click to read:

Reading can be hard, or at least it can present the sort of challenge that modern life is supposed to ease or optimize away. Reading is harder than streaming Netflix, watching a movie, listening to music, or playing video games. Hardness, on its own, is not a virtue. It does, however, matter. It matters to be a disciplined adult. It matters to sit still, to think, to escape the flotsam and be alone with yourself, with another world. It matters to grapple with language, theme, plot, and characterization. It matters that the conclusions aren’t simple, that literature—good literature—is murk. It’s the dark of the wilderness, a lighted match showing that, in fact, there is only more, a vastness you can only begin to comprehend. Reading teaches you that life is not an algorithm and that the certainty of your opinions, neatly sorted into a 2020s rubric, is very much unwarranted, with eternities stretching before and after you. Reading is meeting another consciousness that is not cable television and never will be, that exists at a complexity many lightyears beyond self-righteous pundit panels, the red versus blue, your new spin on the midterms. Reading is knowing those you would never know otherwise. It is, perhaps, the most human thing you can do.

For large stretches of the twentieth century, the educated, middle-class person was expected to read books and even stock them in their living room. The new novel or intriguing nonfiction read was a staple of adulthood, along with buying an automobile or drinking the occasional martini. Pre-internet life made demands on the imagination; somehow, time had to be filled without pocket supercomputers. There were no smartphones in the doctor’s office or in the subway car. There were none at the beach. The book, in this case, had a practical entryway into modern existence, until 2007 or so. By then, the iPhone had arrived.

Now, reading requires you to carve time, to beat back other distractions. It forces you to choose it. Many, simply, do not. Educated Americans are not expected to carry knowledge of books into conversations. They are not expected to competently discuss them. Such expectations, in the current discourse, can be dismissed as elitist. There are many other ways to learn, is one retort. Of course there are. You should partake. And have fun too. I read 40-50 books a year and still try to stay caught up on Cobra Kai and Selling Sunset. It’s plausible, I promise. I do not read books because I am smarter than you or have any particular capability; I do not absorb or retain information in a remarkable way. All I do is make reading a part of my day and week. I decide, affirmatively, to do it. And as a writer, I consider it essential to my own education and progress. If you want to be a writer or describe yourself that way, reading is non-negotiable.

But here’s a bookish reason to read books, and you probably know this one by Emily Dickinson, a shut-in:

The reasons I care why people should read books are similar to those of Barkan: they immerse you in another world, in other points of view, in other times and places—especially if you read a lot of nonfiction—and, among my friends, I love to discuss books and swap recommendations. When I walked home from work yesterday, I called my oldest friend and we spent the whole time talking about books and about the unjustifiably denigrated Thomas Wolfe, a favorite of both of us. (Note: not the more modern Tom Wolfe.)

But my friends in the literati almost uniformly denigrate Wolfe for overwriting, and yes, he did go over the top a lot. But there are wonderful things in his books. We talked about comparing Wolfe to Joyce, and I decided that while Joyce was famous for giving a running commentary on the workings of his own mind, Wolfe should be famous for giving a running commentary of what he perceived. His descriptions of how Americans lived, for instance, are among the best around. If you read one thing by Wolfe, it must be his short story The Child By Tiger, which you can access for free here.

Enough. Below is a book I’ve almost finished; it was recommended by my editor at Viking/Penguin, who happened to edit the volume. It’s very good, and especially worth reading since it’s about the 1918 flu pandemic. But it deals not just with the disease, but also with the science desperately (and usually fruitlessly) mustered to contain the virus. (They had no idea it was caused by a virus until much later; they thought the cause was a bacterium.)

My paternal grandmother died in that epidemic, leaving my infant father (six months of age) with one parent who promptly married another woman who had her own child with my grandfather. His stepmother treated him badly, and for a while put him in an orphanage. I just learned this the other day (the orphanage part, that is); my father never mentioned it. That’s my own flu-related experience.

Click to go to the Amazon site. The book is from 2005, and I recommend it highly, especially if you’re a fan of science: 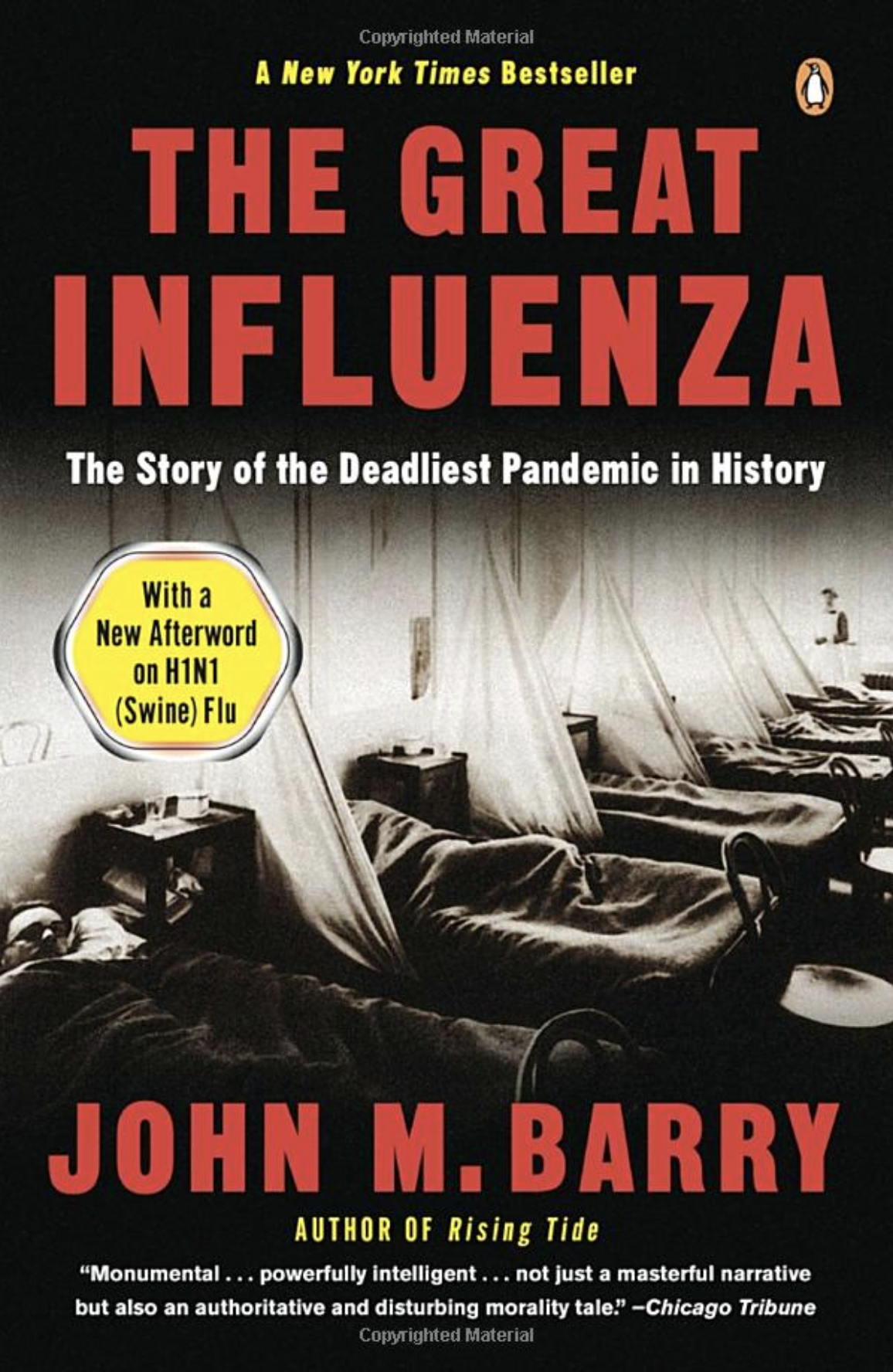 And, on a reader’s recommendation, I’m about to start this, which is fiction. I just noticed the subtitle: A Novel of the Plague. I know virtually nothing about it except that a reader recommended it for its wonderful prose (I’m a sucker for prose), and it’s about Shakespeare’s son Hamnet, who died young. Again, click to go to Amazon. 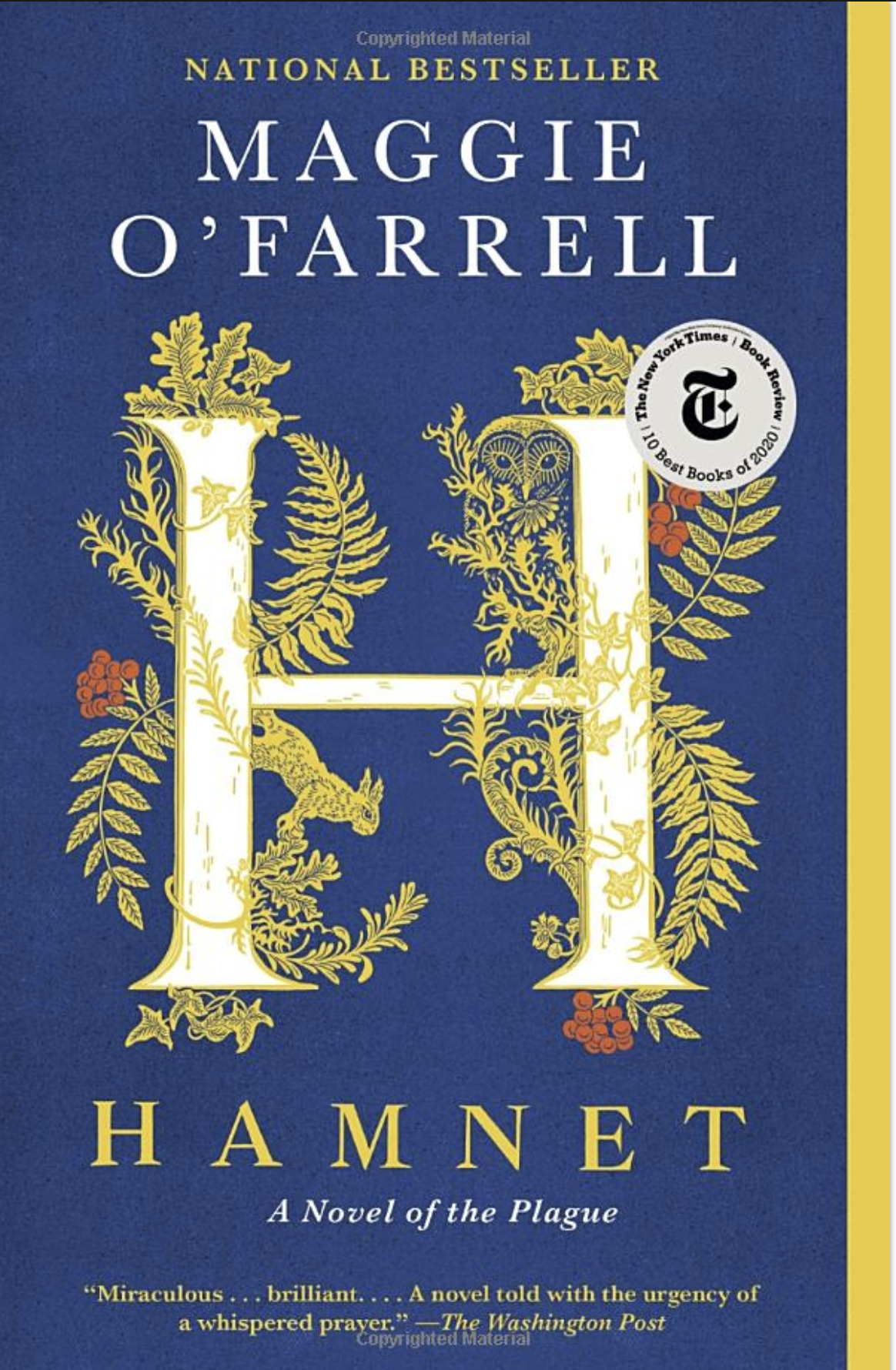 So, what are you reading and what can you recommend? I take these comments quite seriously, and look at all of them.

97 thoughts on “Why you should read books”