One might almost think, with widespread denial of a sex binary of men and women—a denial that in most animal groups is both fatuous and ideologically motivated—that there are no average biological differences between men and women. “Blank slaters” tend to outright deny the existence of behavioral or cognitive differences between men and women, often doing so on the erroneous grounds that “some women are in the range of men’s scores and vice versa”. In such cases the concept of averages seems to have slipped their minds.

But as the dogs bark, the caravan moves on. Increasingly recognizing the biological and medical differences between men and women—note the implicit recognition of dividing up the species into two sexes— funding institutes and journals dealing with illness and medicine (as well as  are increasingly recognizing the importance of studying men and women separately (or partitioning the data by sex) in biomedical work. That includes using model organisms such as mice, which may show related sex differences. This is the topic of the new feature in the journal Nature shown below. Click on the screenshot to read (it’s free).

First, some indicators that dividing up test subjects by sex can give useful and potentially lifesaving results:

Many of science’s gatekeepers — granting agencies and academic journals — feel the same way. Over the past decade or so, a growing list of funders and publishers, including the US National Institutes of Health (NIH) and the European Union, have been asking researchers to include two sexes in their work with cells and animal models.

Two major catalysts motivated these policies. One was a growing recognition that sex-based differences, often related to hormone profiles or genes on sex chromosomes, can influence responses to drugs and other treatments. The other was the realization that including two sexes can increase the rigour of scientific inquiry, enhance reproducibility and open up questions for scientific pursuit.

When studies do include two sexes, the results can be important for health. For example, sex is known to affect people’s responses to common drugs, including some antibiotics. . .

And here are some important biomedical differences already detected:

. . .Despite the bumpy ride, the federal guidelines that were put into place in the early 1990s have led to some important medical discoveries, perhaps a signal that key revelations could emerge from basic research in a few years.

For instance, there are sex-based differences in the heart’s electrical response to several classes of drug, including antidepressants and antibiotics. As a result, sex-based dose adjustments are now recommended for some drugs.

Steroid hormones such as oestrogens and androgens are thought to be primary actors in many of these differences between men and women. For example, women metabolize propranolol, a blood-pressure drug from a class known as beta blockers, more slowly than men do. Researchers think that sex-related steroid hormones acting on the liver can exert these effects. Other factors could include body size and composition, such as the fat:muscle ratio, which tends to be higher in women.

The cut-offs for risk might also differ between men and women. A 2021 analysis of cardiovascular risk related to systolic blood pressure shows what happens if data for two sexes are pooled rather than analysed appropriately. The authors found that when data were pooled, the range for increased risk was a systolic pressure of 120–129 millimetres of mercury (mmHg). But the sex-specific analyses showed that for women, the risk actually begins to climb when systolic blood pressure tops 110 mmHg. If other studies solidify these findings, the result would be a sea change in risk calculation for cardiovascular disease.

That study, as it happens, “was very much inspired and motivated by an NIH request for applications” about sex differences in health outcomes, says Susan Cheng, a cardiologist at Cedars-Sinai Medical Center in Los Angeles, California, and senior author on the report. Without that call for studies specifically designed to look for sex differences, she says, “we had a lot of ideas, but not a thematic focus”. Their findings that men and women differ in risk cut-offs “was actually a real ‘eureka moment’”, Cheng says. “I was like, ‘how did we not see this before?’.” She attributes the results to the NIH’s challenge. “They made it all happen.”

And good for the NIH!

Now surely you can’t attribute all these differences to “socialization,” as the disparity in hormones is based on genes that are differently activated in men and women. Of course, differences in biology due to any factor, like the Patriarchy, still need to be studied for their biomedical effects. But it’s foolish to attribute everything like the above, including the response of the heart to drugs, to environmental influences.

And, of course, if there are no differences between the sexes with respect to a biological trait or response, we need to know that too! This is true for any groups that a priori may differ biologically, but men and women are the most obvious and least ambiguous grouping.

The article highlights some problems with past research, including an apparent lack of knowledge by investigators about how to use statistics to judge the effects of sex, including the simple dictum of using half men and half women in a generalized test on “the population”.  Below is one chart from the paper partitioning 147 biomedical studies starting in 2019. As you see, more than third of them (55) didn’t even consider sex as a factor to study (and that’s dead easy), more than a third (60) didn’t look for interactions between sex and treatment (essential if you want to know if a treatment works differently in men than in women), and only 32, or about 22%, looked for interactions between treatment and sex (16 of these reported a significant interaction, and 10 a nonsignificant interaction).

Finally, even when sex differences were found, as in the red group that didn’t look for interactions, most studies that found a difference didn’t test that difference statistically. The blue group is the one that used statistical tests, but even in that moiety, 6 tests didn’t report the results and one non-significant result was erroneoously reported as a difference.  I thought biomedical researchers would be more savvy than this. 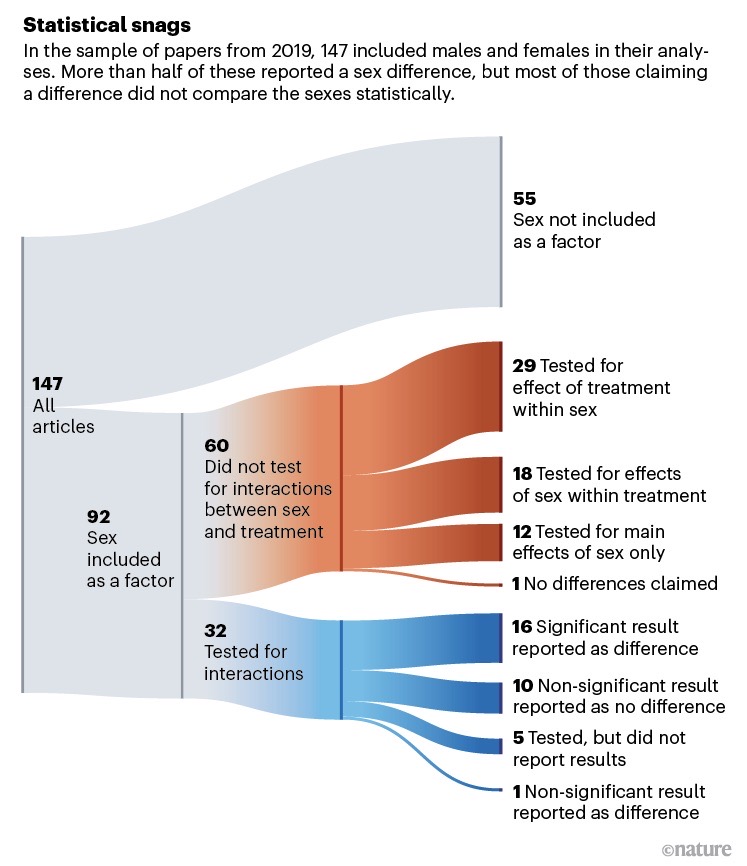 Now there’s a few gestures in the paper toward the “sex isn’t binary” trope by bringing in gender. For example:

The publishing community is pushing for similar clarity. In 2016, it published the Sex and Gender Equity in Research (SAGER) guidelines, which set out how to report sex-based differences in published research. Individual publishers, including Springer Nature (which publishes Nature), have their own policies encouraging researchers to report results by sex, defined as a cluster of biological traits, and sometimes also gender, which is socially defined.

Since “gender” is a social construct, and progressives say there are a gazillion of them, I don’t see how you can report results by gender unless you lump everyone besides men and women as “other”. (I won’t quibble with “sex defined as a cluster of biological traits”, which is technically incorrect but good enough for the purposes of biomedical research.)

And this is thrown in as well, seemingly out of nowhere:

Defining sex as a crude binary, predicated on the chromosomes present, or on specific anatomy, could be too limiting. Some species, such as the nematode worm Caenorhabditis elegans, have one sex that makes only sperm cells and one that makes both sperm and egg cells. And in a vast assortment of species, sex is determined environmentally rather than chromosomally. And still other species can change sex during their lifetime. Placing cells, tissues or even whole organisms into a pair of categories takes on layers of difficulty in these contexts.

Note the pejorative adjective “crude,” meant, I think, to disparage the binary.  Once again they send in the clownfish, nematodes, and turtles, but these don’t refute the idea of separate sexes. Nematodes can be either males or hermaphrodites, the latter being both male (making sperm) and female (making eggs), some clownfish can change from male to female if the alpha female dies—but there are still two sexes, and temperature-specific sex determination, as occurs in many turtles, still gives you males and females. In that case the two sexes are developmentally channeled via an external stimulus rather than via chromosomes and genes, but there are still men turtles and women turtles. (Why some species do this is still not well understood).

The fact remains that these species do not show more than two sexes, that they are in the minority of vertebrates and in an even smaller minority of birds and mammals, and, in the end, humans aren’t clownfish, turtles, or nematodes.

Besides emphasizing the valuable lesson that men and women are biologically different in ways that can be important for medical treatment, this article also shows us that where it really counts, where the rubber meets the road—that is, when lives are at stake—the palaver about the binary of sex being a fiction vanishes.

None of this, of course, is intended to ignore those who have disorders of sex determination or transsexuals who have had hormone therapy or surgery, for those patients may need separate study rather than lumping them into one sex or another. That will be hard to do given the paucity of such people, but everyone deserves the best treatment that science can offer.