UPDATE: Today’s launch has been scrubbed because there’s a problem with the cryogenic hydrogen that’s used as fuel.  They are still troubleshooting as they have no idea what’s wrong. The earliest that a launch can occur is now early afternoon Friday, so stay tuned.

I’m putting this up early as the blastoff could occur as early as 8:30 Eastern time.  The announcement was sent to me by my William & Mary pal James “Bat” Batterson, who used to work for NASA, and I’m putting it up exactly as he sent it (indented):

Just a heads up that first moonshot with human-capable Orion spacecraft is scheduled for Monday morning in a window between approximately 0830 and 1030 EDT from Cape Kennedy. This rocket is as powerful as the Saturn V of the Apollo days of the 1960’s and 70’s and should be an impressive (noisy) blast off. As best I can tell – I have not followed things that closely – the first 8-9 minutes, as with the space shuttles, is the critical period to low earth orbit (LEO), with the next several hours having scheduled boost burns to get the vehicle into a lunar trajectory for the next several days.
This will be an uncrewed rehearsal, but will cycle through all stages required for a human-crewed flight to the Moon. So fingers crossed that it will be successful. As with anything this complex, lots of things need to go extraordinarily right.
There appears to be lots of streaming and tv coverage planned including CNN; i expect even the networks but they will likely have obnoxious talking heads; and my usual go-to: space.com which usually links in NASA TV live.

Here’s the live NASA feed. As I watched this at about 5 a.m. Chicago time, there was already a hydrogen leak that they were trying to repair.

An update from Bat at 6:30 Eastern time:

I am watching on space.com which has a video of nasa.live going.  Came on air at 0630. There are some issues being worked with fuel and they think that the planned 0832 launch time may slip but do not know by how much yet.  There are really crisp beautiful views of the full rocket and of some of its components. One of the great technological advances since apollo has been digital video in place of film!
You will notice that the configuration has the capsule that will carry people in future missions at the top of the stack, ahead of the rocket fuel. This is due in a large part from a safety lesson taken from space shuttle flights that it is dangerous to have people positioned next to fuel as it makes an emergency abort difficult to impossible. This system has a launch abort system (LAS) that, in case of an emergency, can engage and quickly carry the capsule well away from the booster anytime from sitting on the launch pad and into the first few minutes of flight. One of my former engineers is flight dynamics lead on the LAS, a project he started working on about the time that I retired in 2008.  These very complex engineering projects do not happen overnight!

NBC in the Bay Area has a photographic as well as a data comparison of both the crew modules and booster rockets.  For example, here’s the Apollo module that was part of the Moon launches: 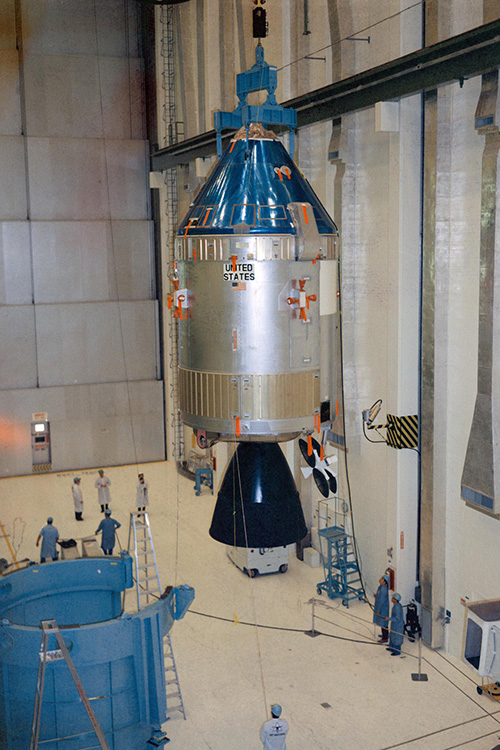 And the Orion module: 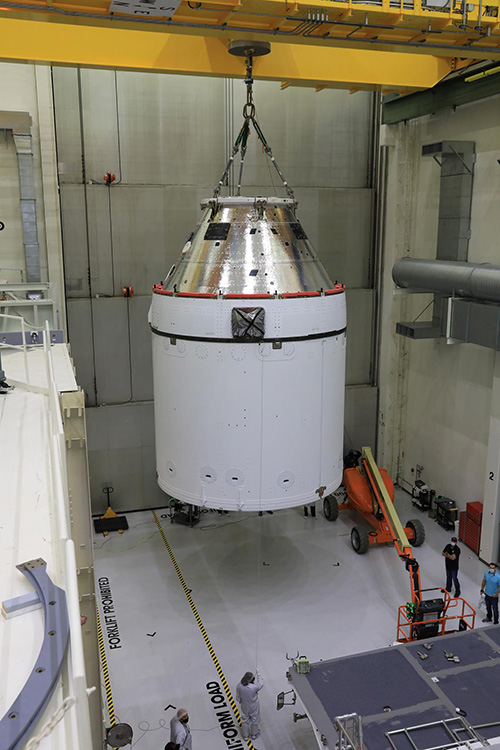 7 thoughts on “Orion spacecraft scheduled to lift off this morning (check at 8:30 Eastern time); watch here”