All the Light We Cannot See, by Anthony Doerr, was published in 2014, and I hadn’t heard of it until an old friend recommended it two weeks ago—as did his wife. It turned out to be the best book of fiction I’ve read this year, and perhaps in the last several years. It is a tour de force: mesmerizing, unbelievably inventive, and the kind of book I can’t read before I go to sleep because I just want to keep reading. I finished the book last night and my thoughts are still full of it and of the scenes as I imagined them. (Like everyone, I form a picture in my mind’s eye as each place or character is introduced.)

The book interweaves the stories of two characters, jumping back and forth in time from the beginning of WWII until 1974, with no straight temporal sequence—except that the two stories unfold in parallel, and in very short chapters.

One of the two subjects is a blind French girl, Marie-Laure, daughter of the key-keeper in a big Parisian museum, and the other a German boy, Werner, an orphan ultimately coerced into becoming a German soldier. They’re surrounded by a rich panoply of other characters, including Werner’s sister Jutta and Marie-Laure’s great uncle Etienne.

The two protagonists are connected at the beginning only because when Marie-Laure and Werrner were children, Etienne broadcast the writings of his own brother on a homemade radio transmitter in the French seaside town of Saint-Malo. Way over in Germany, Jutta and Werner (an amateur radio fanatic) could hear those broadcasts on a homemade receiver, ethralled by the beautiful science scenarios described by Etienne. (Science, by the way, plays a big role in this book, from Marie-Laure’s fascination with mollusks to Werner’s fascination with radios. Even Darwin makes a few appearances in Etienne’s broadcasts.)

I can see that this will become way too long if I even try to summarize the plot without spoilers, so let me be brief.  As the Germans enter Paris, Marie-Laure and her father flee the city, the latter entrusted with a priceless diamond from the museum, tasked with keeping it out of Nazi hands. They wind up in Saint-Malo, taking refuge with Etienne and Madame Menec, Etienne’s housekeeper.

As the war proceeds, Werner becomes an expert in locating covert radio transmissions, but he’s not your average Nazi—he is empathic and kind and arrives at his job through coercion. (The mixture of good and bad in people is one of the book’s themes.) When the Allies invade France, Werner and Marie-Laure’s stories begin to converge as the German is sent to Saint-Malo to pinpoint covert Resistance radio broadcasts made by Marie-Laure. The war ends, people die, and the story fast-forwards to 1974, when only one protagonist is left. The theme of loss plays out on multiple levels, including that of the diamond, and one closes this book with a bittersweet feeling and perhaps an extra bit of moisture in the eye.

The writing is beautiful—simple but evocative—and the story, while complex, never fails to be convincing.

If you like fiction at all, you must read this book. It won the Pulitzer price in 2018, and deservedly so. I believe one reader also recommended it here, while another didn’t like it. But I can’t imagine disliking this book—not if you read fiction. 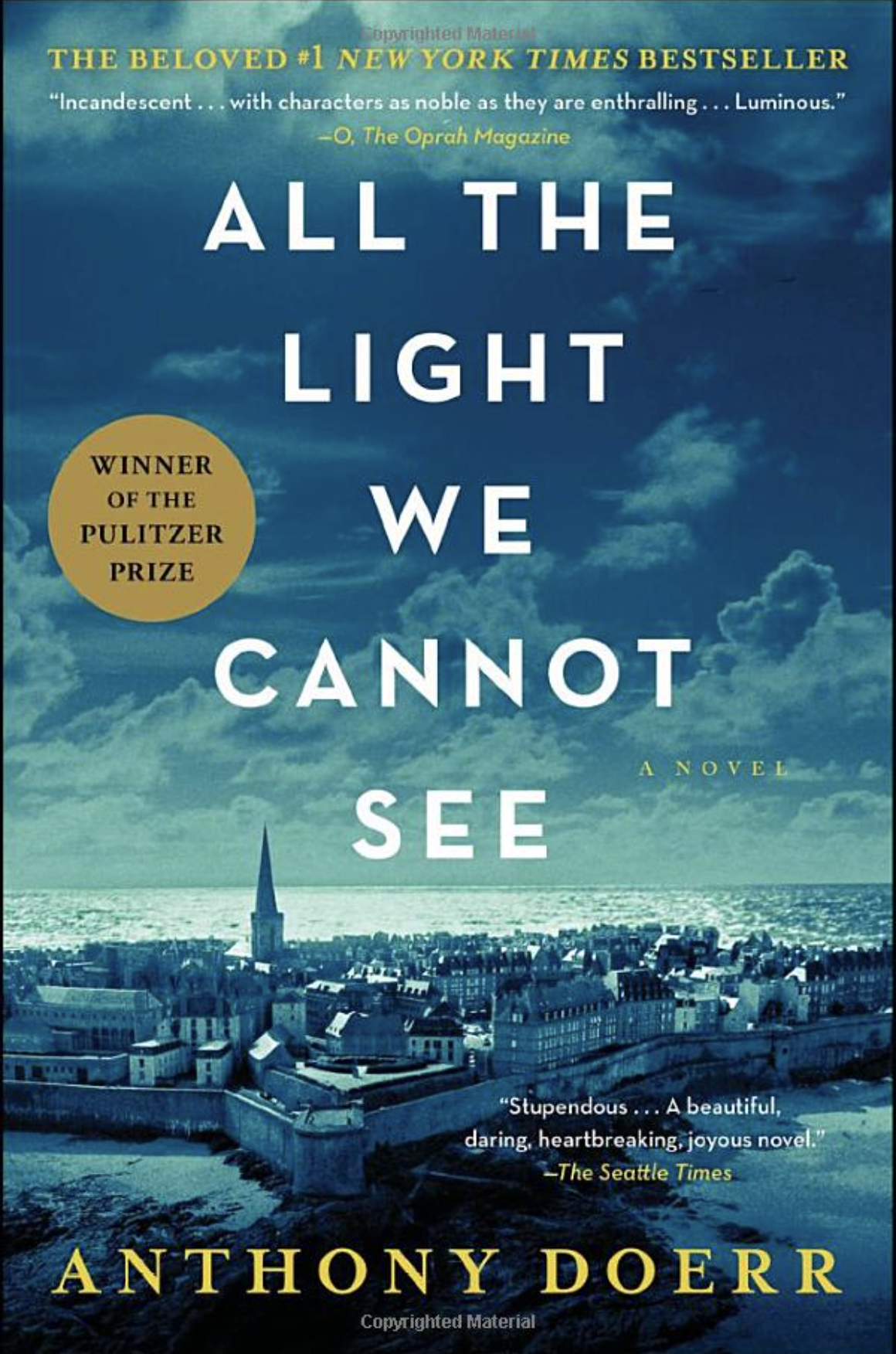 It’s worthwhile reading the Wikipedia page on this book to see its genesis (a man cursing his cellphone) and why it took ten years to write. Doerr explicitly wanted to write a war story that, while set in war, was not about war. The research behind the story is immense. There’s also a mention that Netflix is making the novel into a four-part movie series.

Here’s Saint-Malo, a place I’ve never been. I couldn’t envision the city as I read the book, and am glad to see it now. The town has been rebuilt, as much of it was destroyed by bombing during the war.

42 thoughts on ““All the Light We Cannot See”, a fantastic book”