Today we have mollusk and cnidarian photos from Taryn Overton. Her captions and narrative are indented, and you can enlarge the photos by clicking on them.  First, the introduction:

These are a few sea creature photos from South Florida.  My hand is in the majority of these photos, as one can wait rather a long wait for conchs to venture out of their shells of their own accord.  All were briefly photographed and returned to the surf.  The camera used was an iPhone 11.  Locations were various but include Sanibel Island, Marco Island, Delnor-Wiggins Pass State Park (near Naples, FL), Lauderdale-by-the-Sea (near Fort Lauderdale, FL), and Dr. Von D. Mizel-Eula Johnson State Park (near Hollywood, FL).

Strombus alatus (Fighting Conch).  These conchs (along with numerous others in the Strombidae family) have remarkable eyes!  The eyes are located on the ends of peduncle structures called ommatophores and are of the camera-type (simple) variety.  That is, a single lens collects and focuses light onto the retina.  Research of gastropods in the Strombidae family has shown that the eyes have a complex architecture, with tightly packed photoreceptors and at least six different cell types.  Similar to cephalopods, their lenses also reduce spherical aberrations through graded refractive indexes.  These anatomical findings, taken together with recent behavioral studies, show that they have both high contrast sensitivity and high visual acuity.

If the eye is injured or amputated, the ommatophore tip experiences a migration of cells that reassemble in correct topographic orientation.  At first the regenerating eye is small, but eventually it grows to the size of the original and is once again functional.  A Master’s thesis* where Strombus alatus eyes were amputated demonstrated restoration of rhodopsin and Gq proteins (necessary for phototransduction) within 4 weeks, suggesting return of visual function by that period.  I find it fascinating – the ability of these gastropods to regenerate an entire eye from cells that then reintegrate with the central nervous system to function!

The conch photographed here has been recently injured.  Something took part of the foot, the corneous/sickle-shaped operculum (see other photos of conchs with intact feet/opercula), and the right eye.  The eye is in the process of regenerating.  I’ve found a few other conchs over the years that have been missing their operculum and part of the foot but were healed from the previous trauma.  Based on those observation alone, it does not appear that the operculum or foot regenerate in any significant capacity – but I’m not sure.

Also of note – they have a sensory tentacle that hangs from the ommatophore and functions in scent detection (food, predators, etc).  These are more readily seen in the Aliger gigas (Queen Conch) photographs. 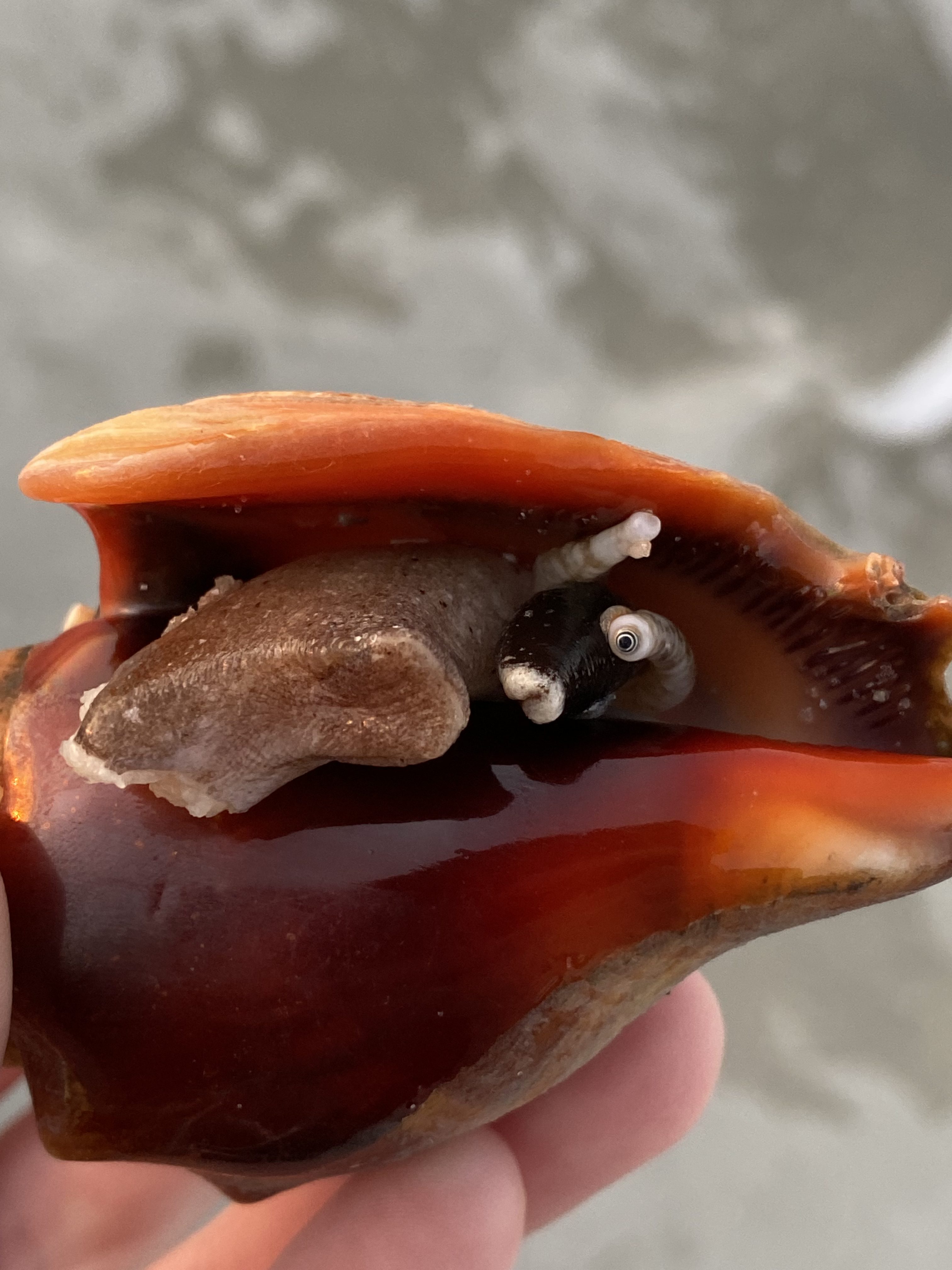 *Figures 1.2 and 3.1 below are from the following source: Clark, J.M (2018). Restoration of visual performance and opsin expression within the retina during eye regeneration in the Florida fighting conch (Strombus alatus).  (Master’s thesis). 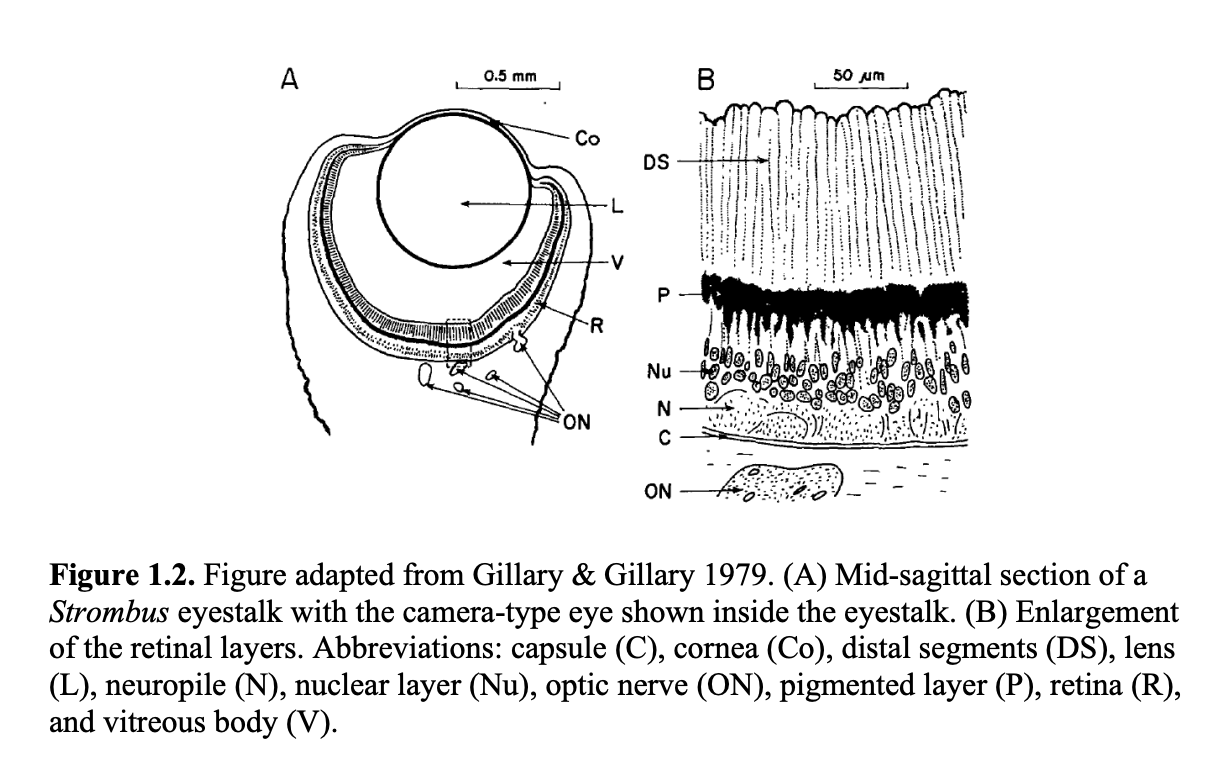 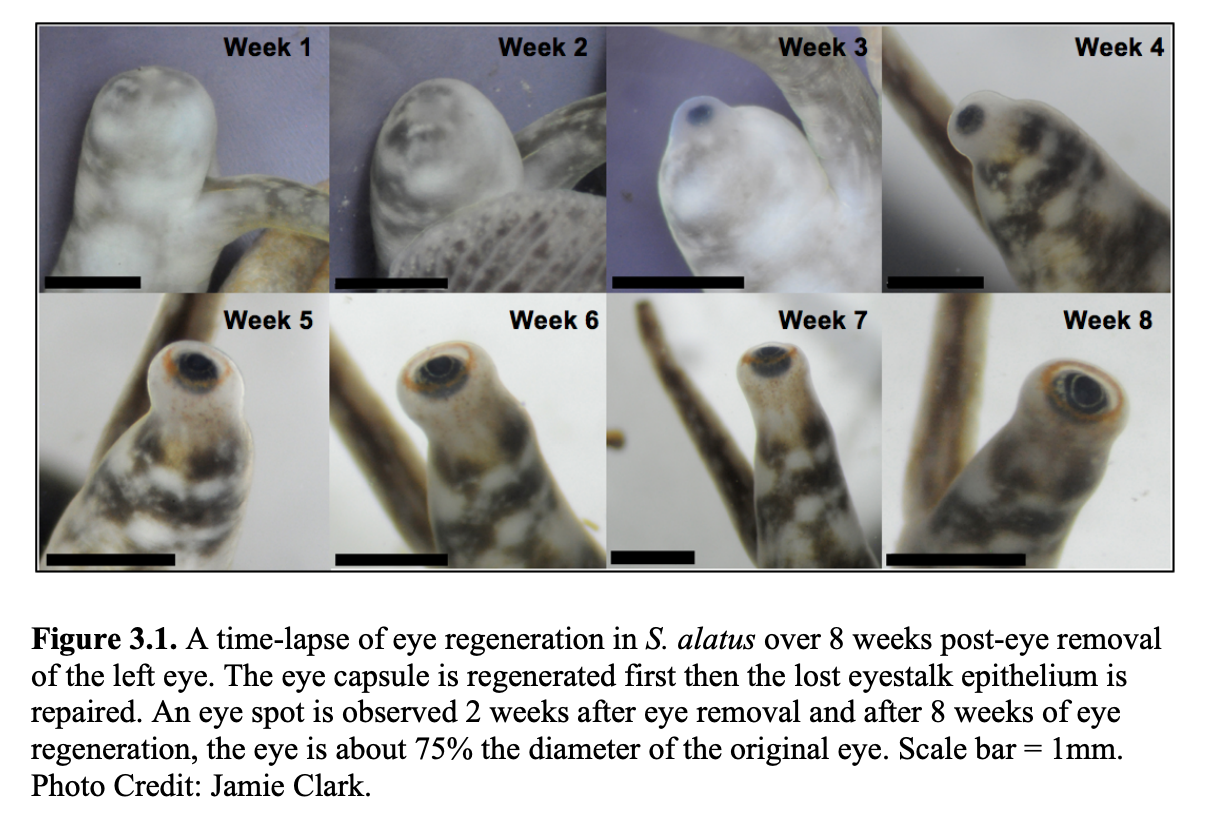 Strombus alatus (Fighting Conch). I often find that Fighting Conch have numerous shell pieces adhered by a mucous substance to their foot.  Over the years I’ve wondered if it was some sort of defense mechanism, as I often can’t see the organism behind the shells.  Whether or not this is deliberate on the part of the conch, a secondary effect of biology/mucus produced on the foot, or a combination of both, I’m not sure.  When the ‘My Octopus Teacher’ film came out in 2020, the behavior of the common octopus (Octopus vulgaris) covering herself with shells/debris as an apparent defense mechanism reminded me of this. 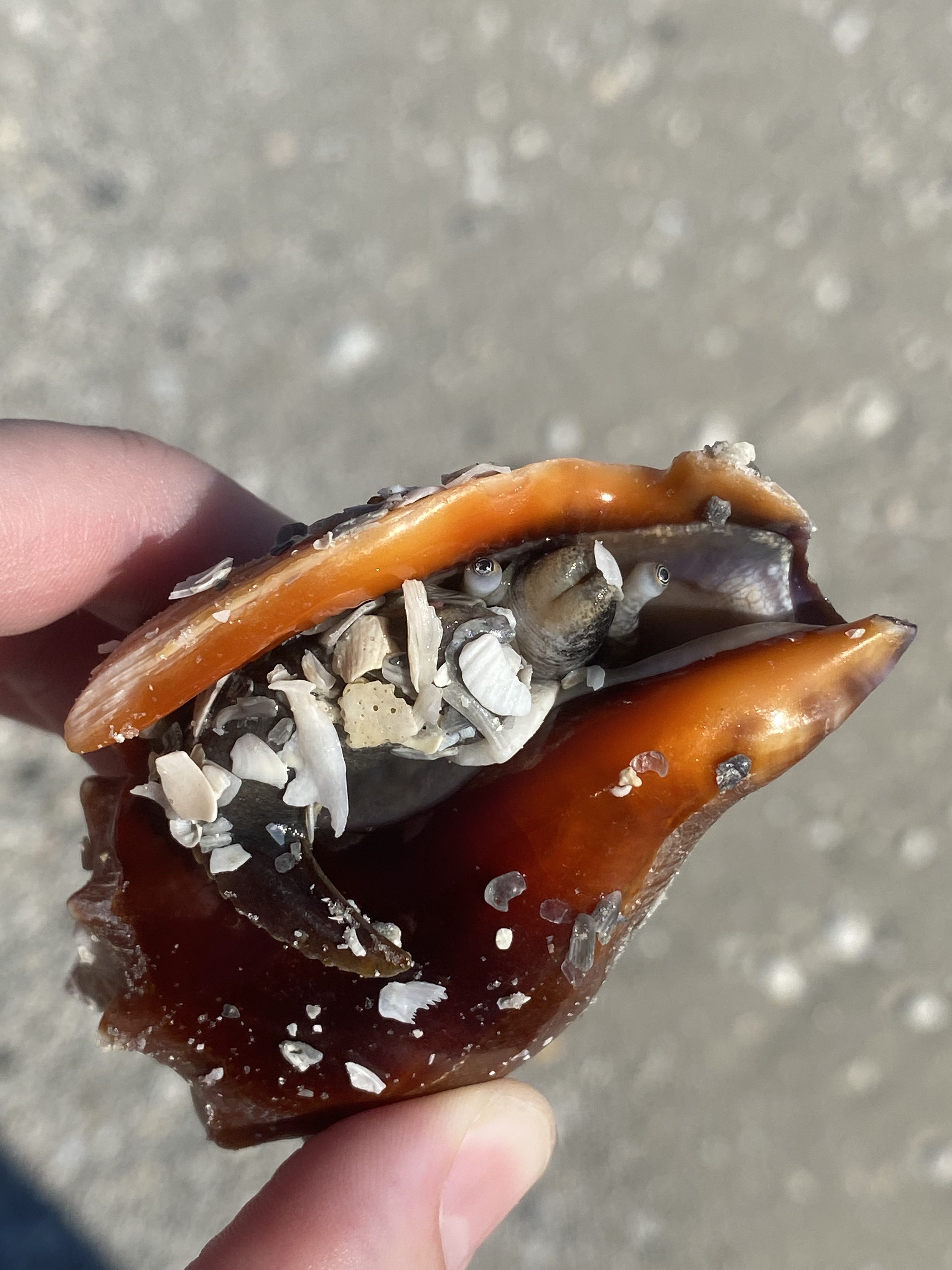 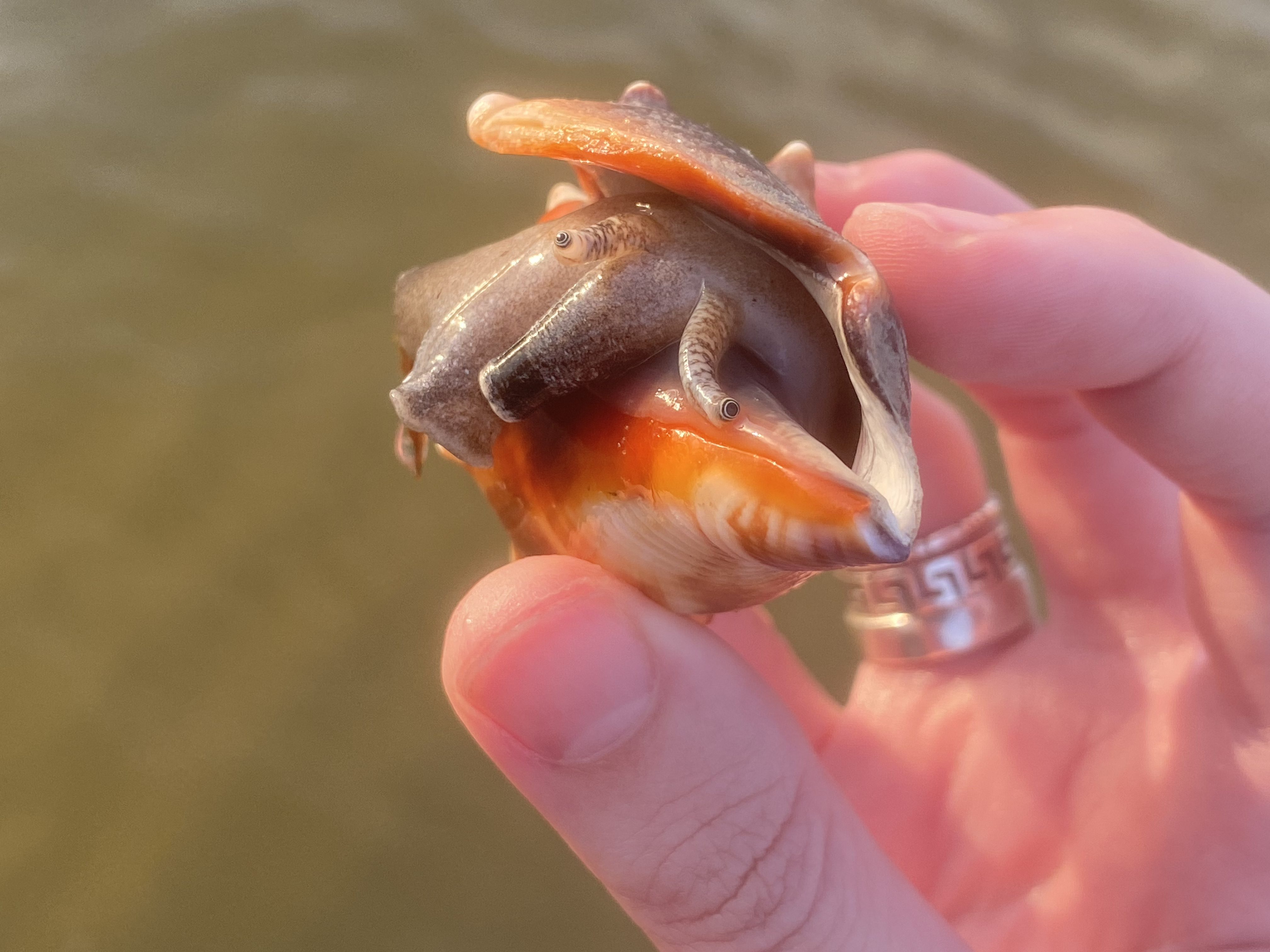 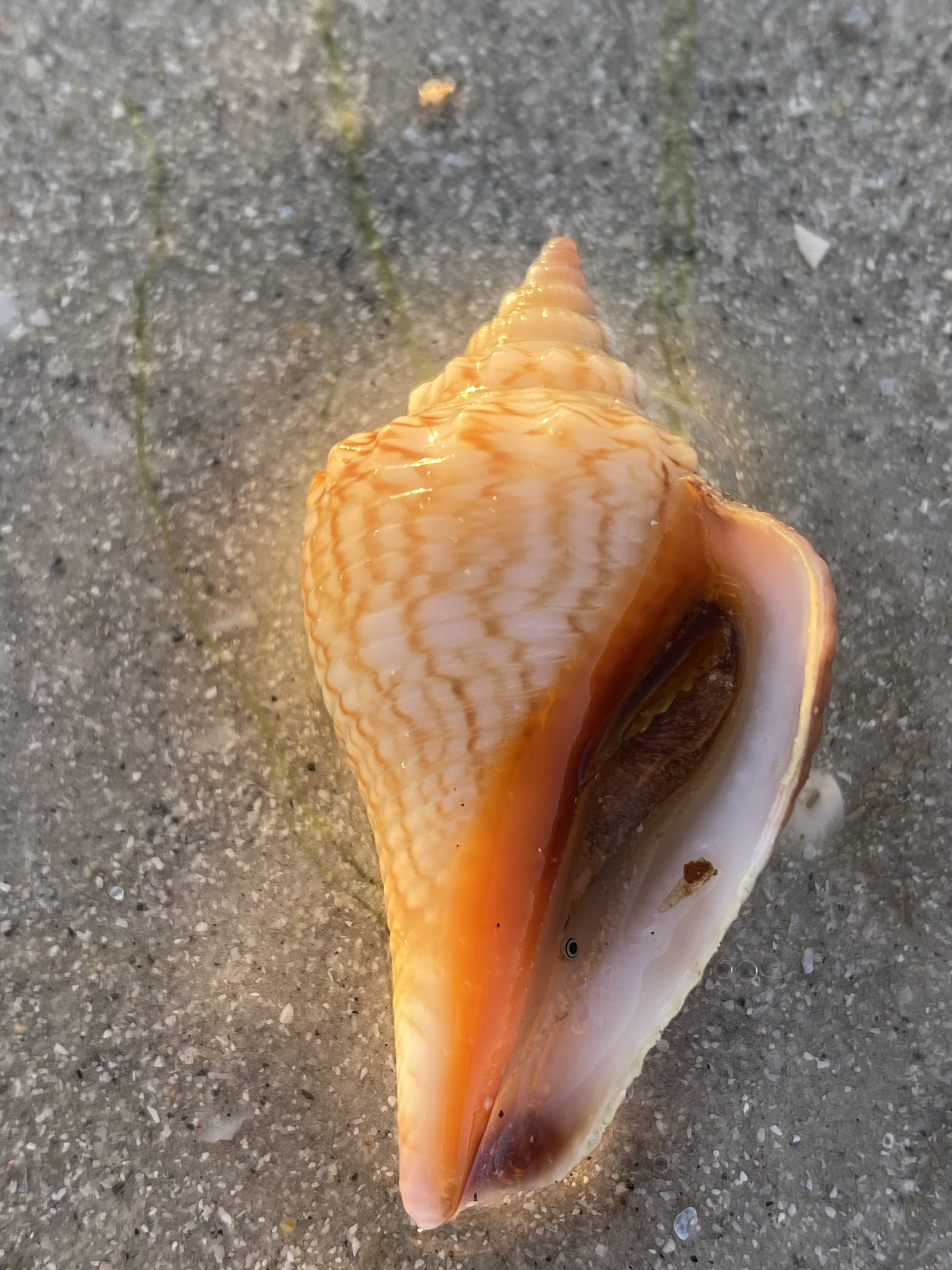 Aliger gigas (Queen Conch).  The discussion regarding eyes of Strombus alatus can be applied in a similar manner to this species. 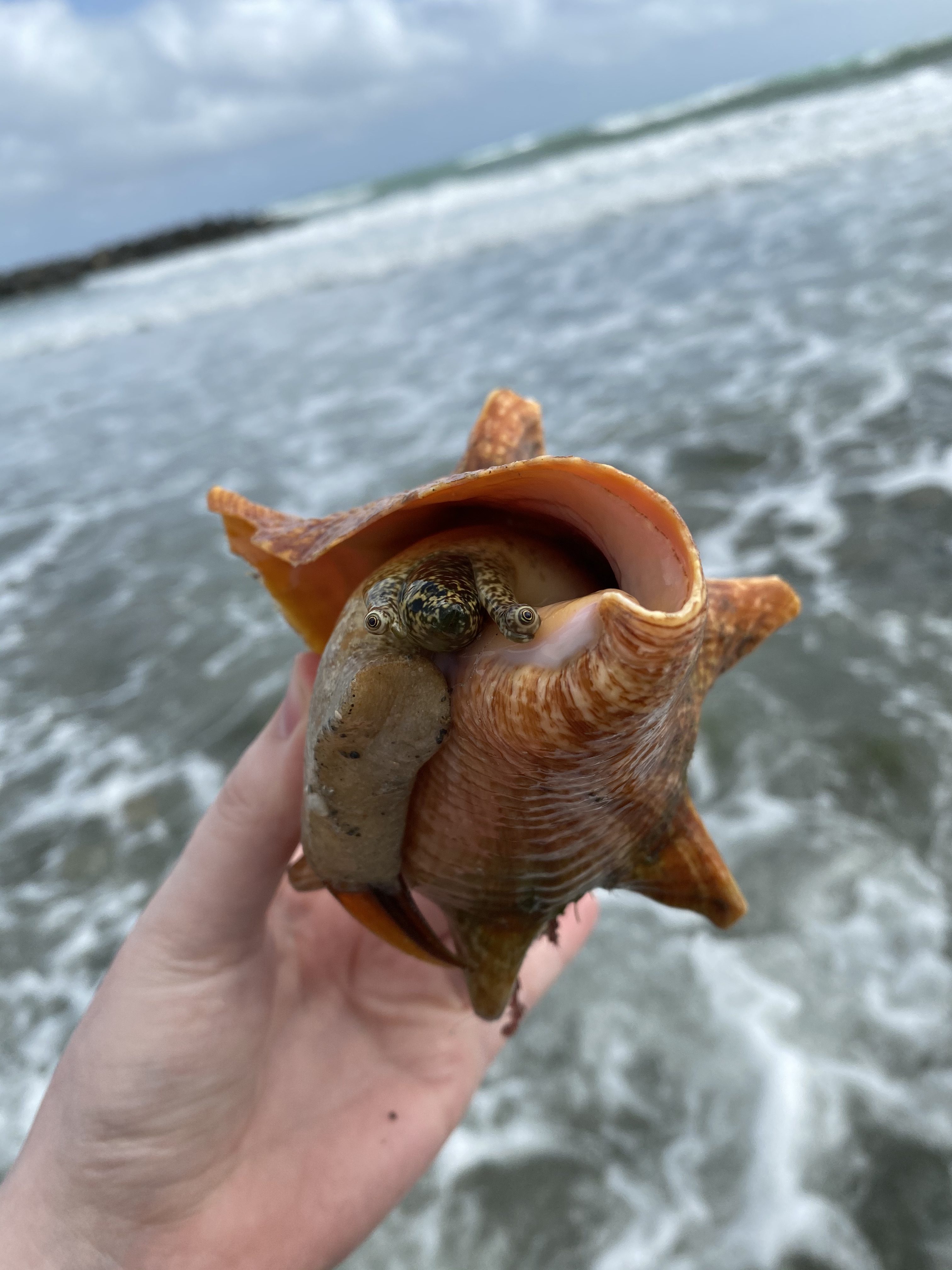 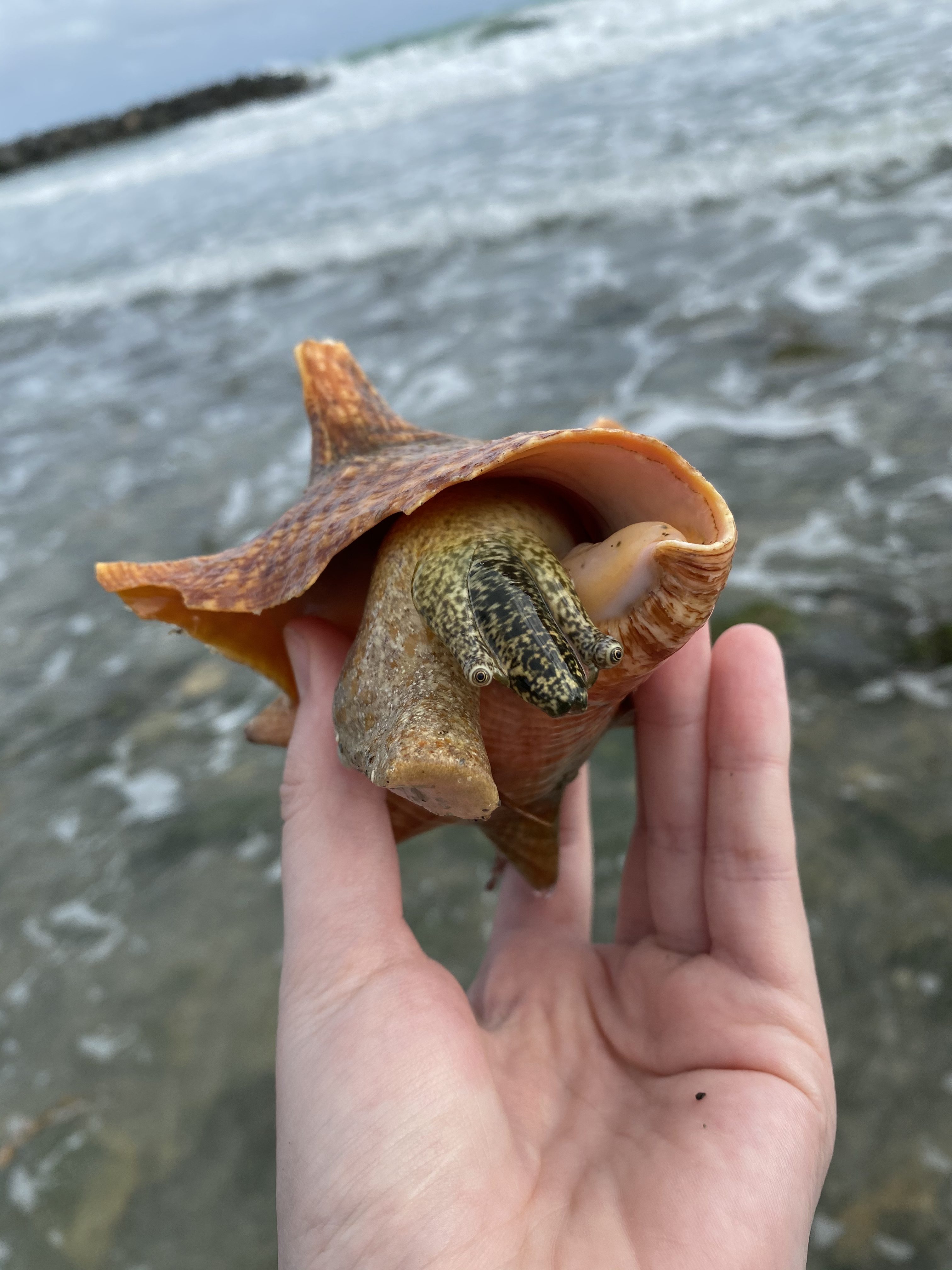 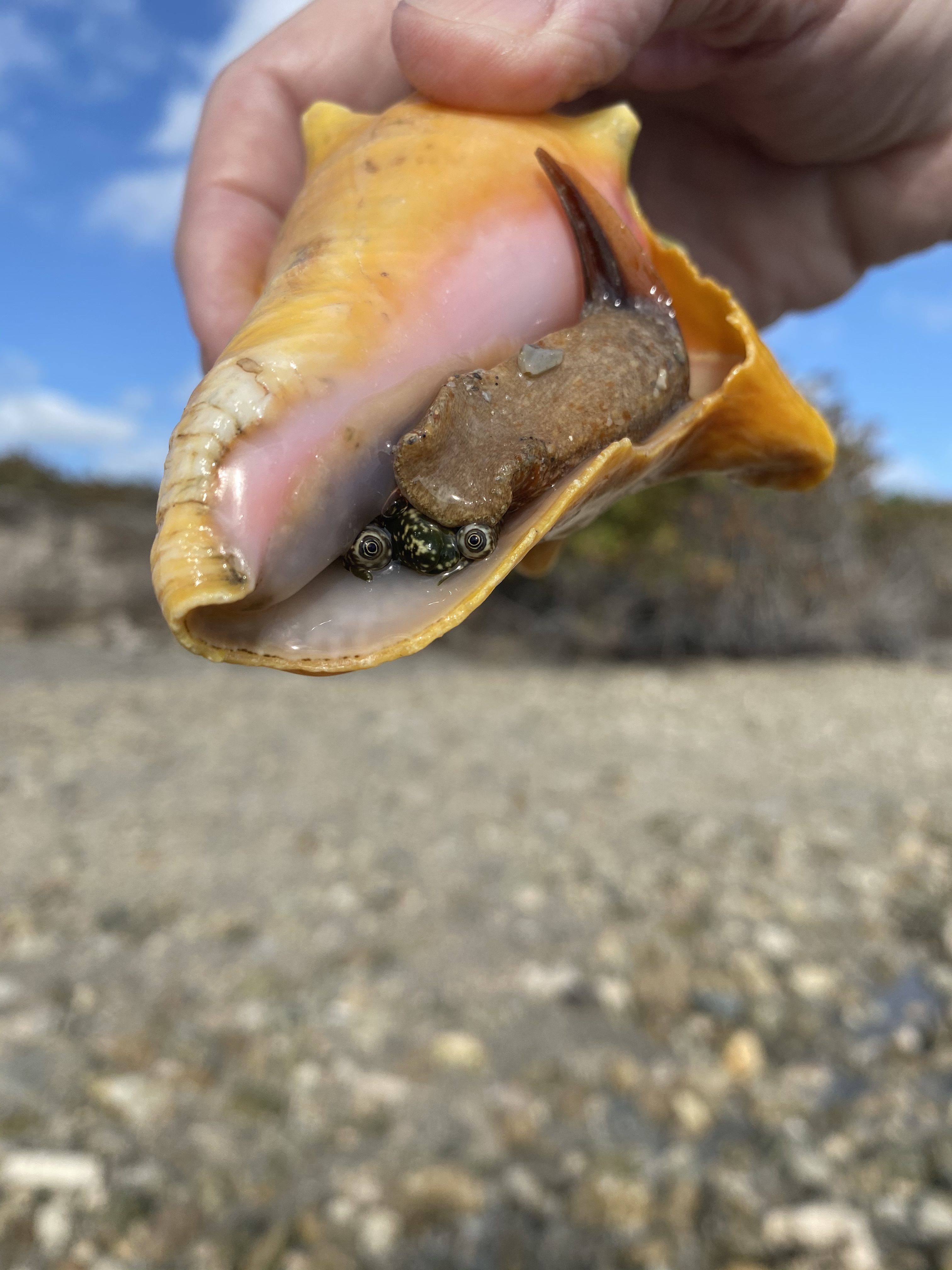 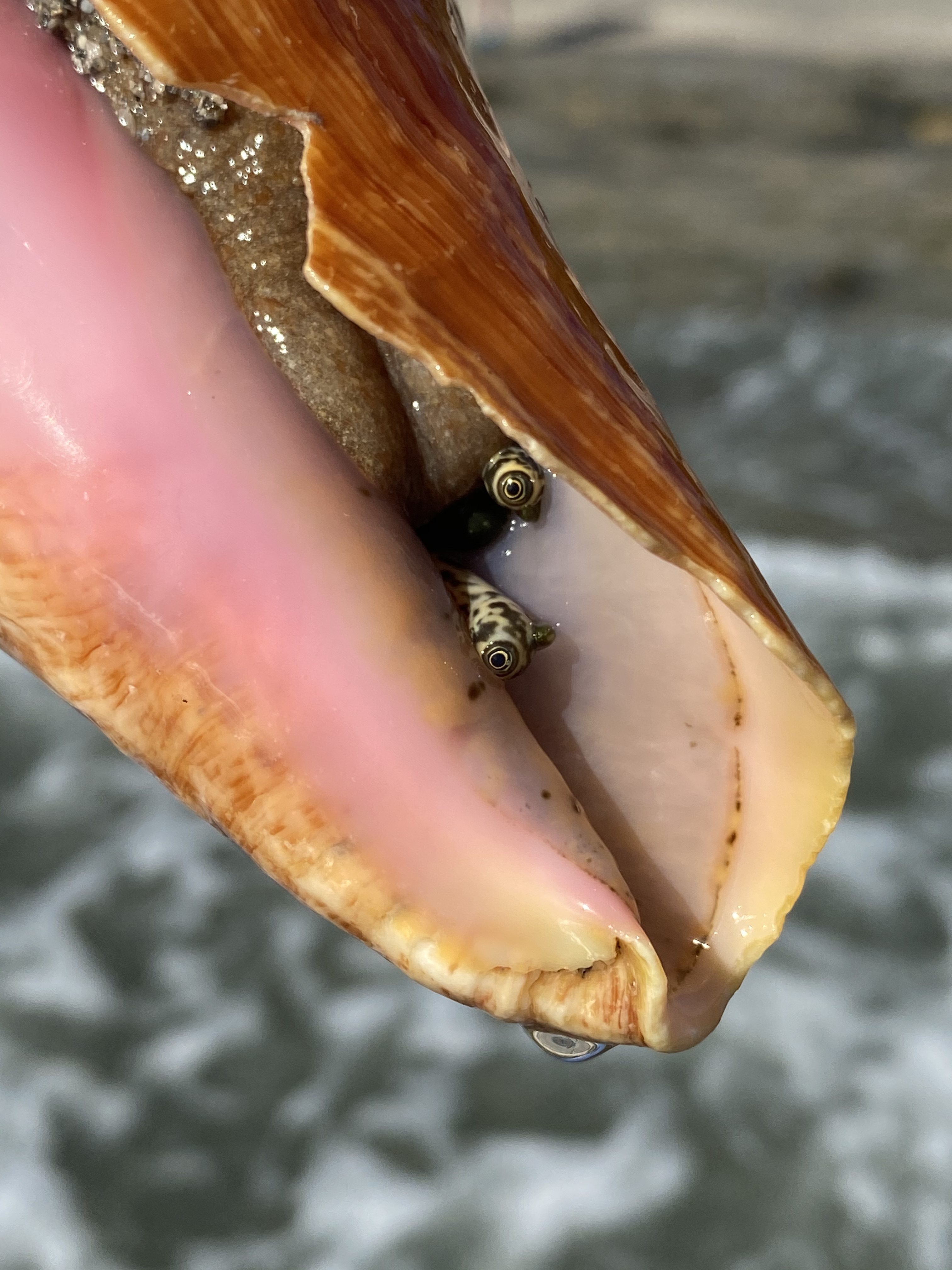 Sinistrofulgur perversum (perversum lightning whelk).  ‘Perversum’ – derived from the Latin word perversus, meaning “turned the wrong way”.  ‘Sinistro’ – Latin for left.  Their left-handed (sinistral) aperture separates them from the majority of other marine gastropods.  Being ‘lefties’ helps to protect them against typically right-dominant predators like stone crabs.  Right-handed (dextral) lightning whelks have been documented but are rare.  I mostly find small, uninhabited shells but have run across a few larger, living specimens. 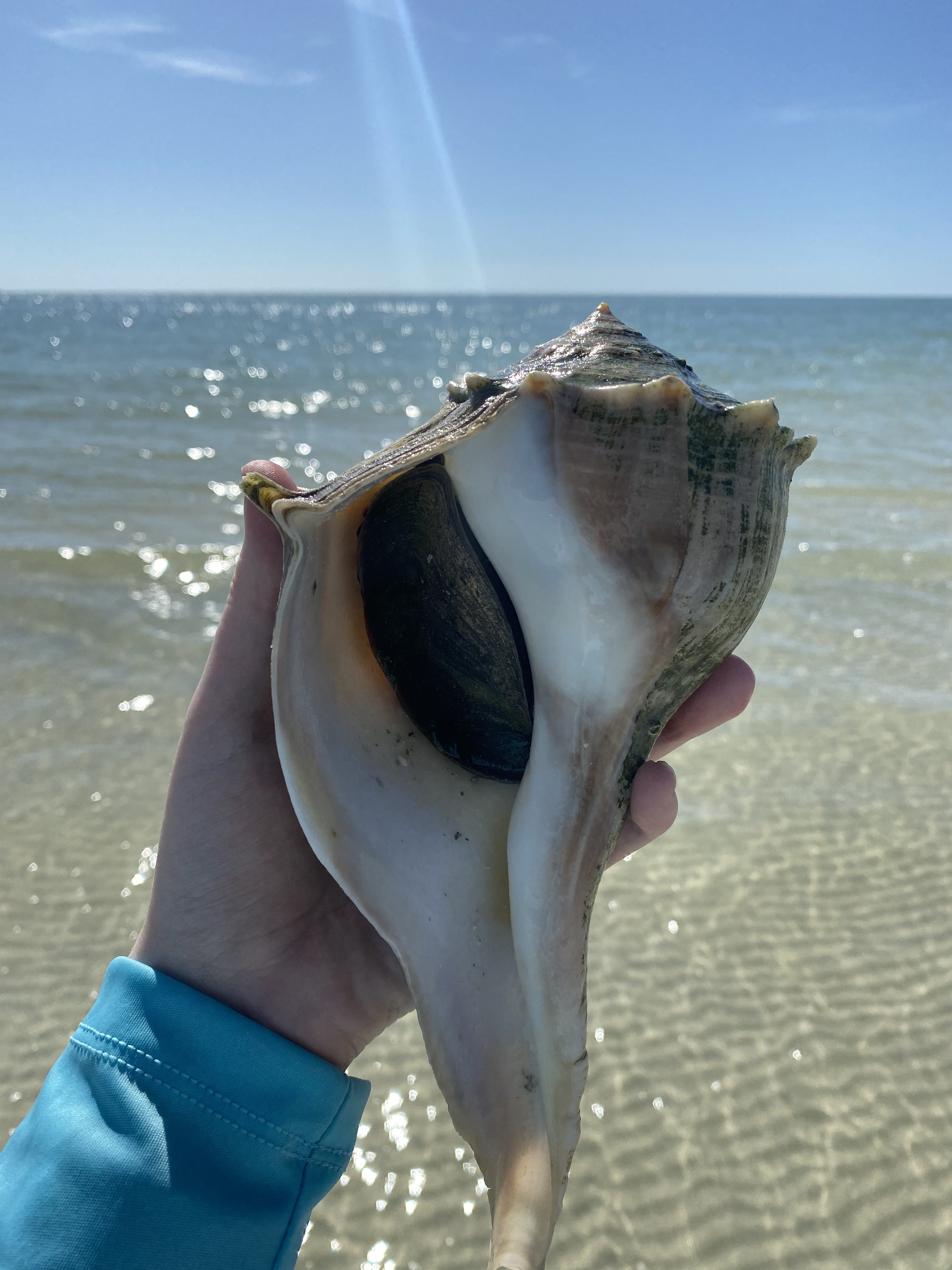 Sinistrofulgur perversum (perversum lightning whelk) egg casing that washed up in the surf.  These casings are colloquially known as ‘mermaid’s necklaces’.  They spawn from March-April, and the casings can be 27-83 cm long.  Each strand has up to ~200 disc-shaped capsules containing up to ~100 eggs (numbers vary based on the source).  If you pick them up, you can hear the rattle of the tiny whelks (protoconchs) within the capsules.  Juveniles begin to hatch in May. 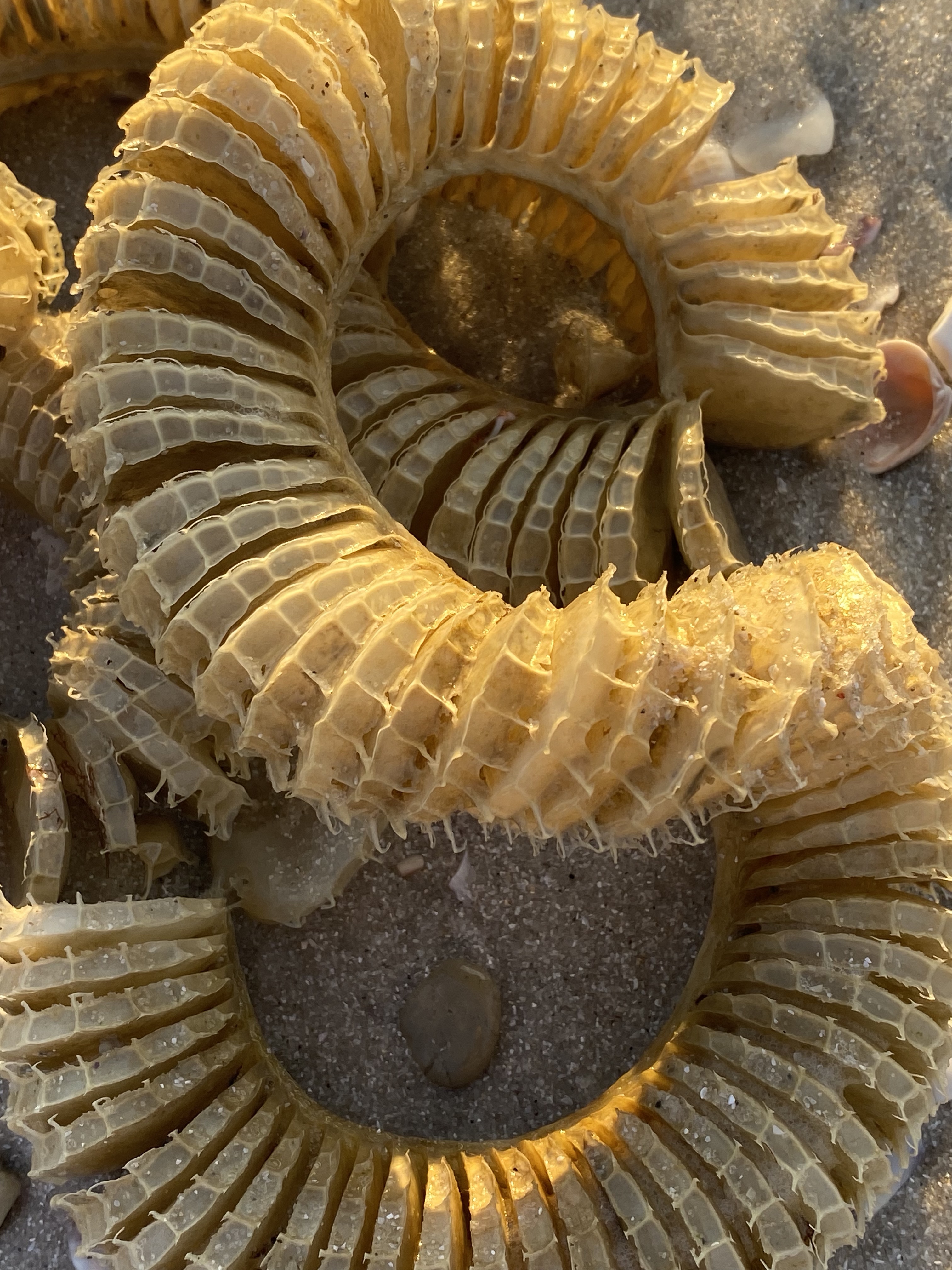 Velella velella (velella).  The marine life so nice they named it twice.  Also known as ’purple sail, ’little sail’, and ‘by-the-wind sailor’.  Classification and exact nature are disputed, and I don’t have specialized taxonomy knowledge to distinguish which classification is correct.  They are not jellyfish and may be either a single large hydroid polyp, or a colony of hydroid creatures.  The organism(s) also harbor symbiotic zooxanthellae (single celled dinoflagellates) that help with sustenance. 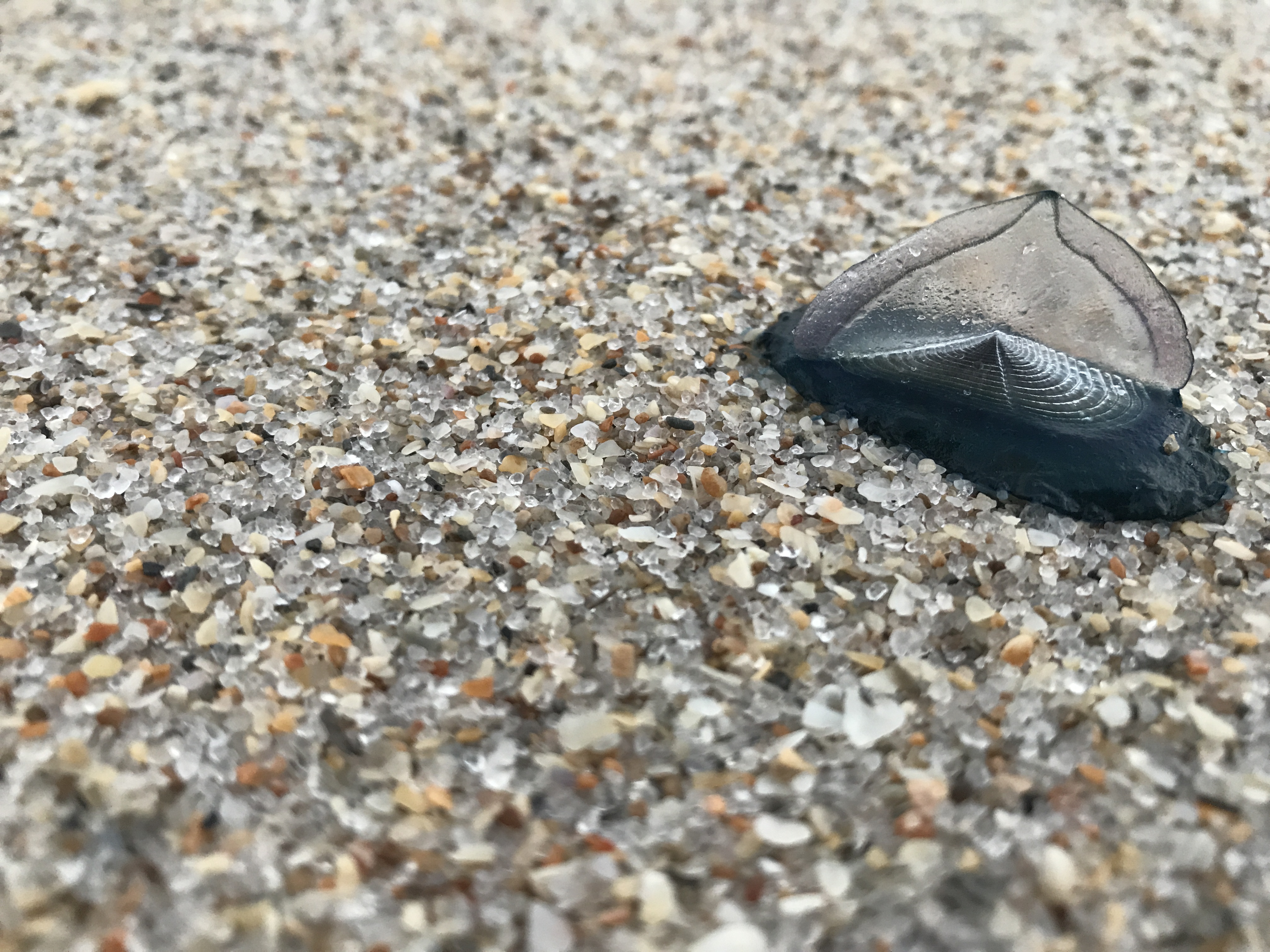 Physalia physalis (Portuguese man o’war).  This is a siphonophore, and is a colonial organism composed of smaller units called zooids.  I often walk the beaches at dawn and dusk, and occasionally there are periods where hundreds will wash ashore.  For those that find themselves in similar positions, I recommend shoes on the beach.  These guys have long tentacles bearing nematocysts (specialized stinging cells).  Even if you’re confident you’ll manage to avoid all the tentacles, you won’t! 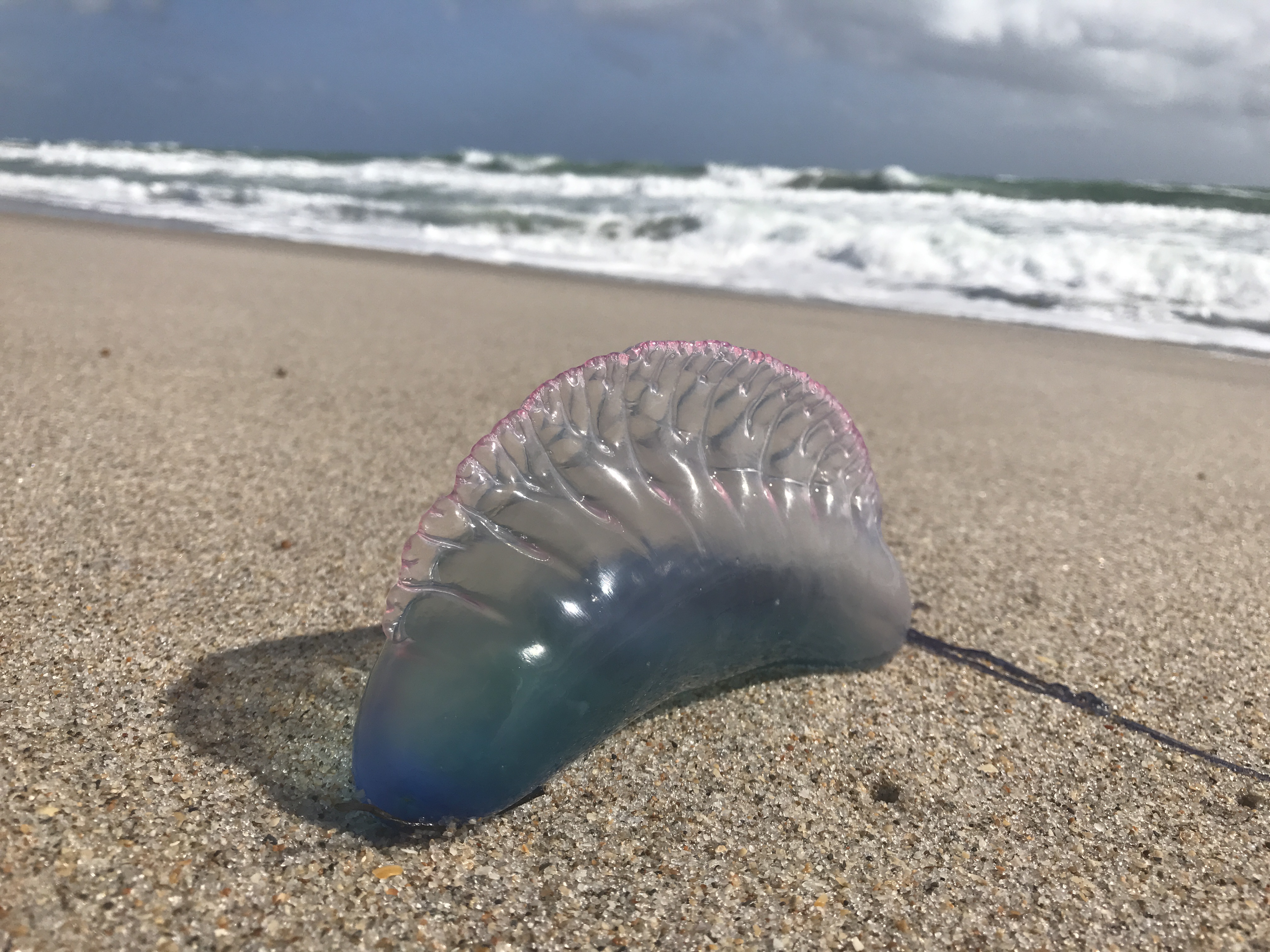