Denis Noble (born 1936) is a British physiologist highly regarded for his work in that field (he has an FRS). Wikipedia notes his accomplishments:

He is one of the pioneers of systems biology and developed the first viable mathematical model of the working heart in 1960.

What the article doesn’t discuss is that Noble has spent the last period of his life attacking neo-Darwinism, asserting that its most important foundations are either wrong or overemphasized. Noble is regarded by colleagues I respect as a bit of an enthusiast, bordering on an unhealthy obsession, though he’s much admired by the “Third Way of Evolution” group who argue that neo-Darwinism either needs a serious revision or a trip to the garbage can.  Noble shows us that you can be a great physiologist but a lousy evolutionary biologist.

In an earlier post I wrote, “Famous physiologist embarrasses himself by claiming that the modern theory of evolution is in tatters“, I emphasized five assertions Noble made in a 2013 paper in Experimental Physiology, and then I criticized them as being either deeply misguided or flat wrong. Noble’s claims:

And yet Noble continues to bang on about “the broken paradigm of Neo-Darwinism,” which happens to be the subtitle of his new article (below) in IAI News, usually a respectable website run by the Institute of Art and Ideas.

Noble is especially excited because he sees himself in a war for the soul of biology, a soul currently occupied by the modern theory of evolution. And so, in this article (see below), Noble once again raises the specter of Lamarckian evolution: the idea—which he sees as both very important and unduly neglected—that adaptations can arise from modifications of an organism’s heredity directly by the environment. (The classic example is a giraffe stretching its neck to reach leaves on trees, and that usage elongates the neck, an environmentally-induced change that somehow worms its way into the mechanism of inheritance so that giraffes eventually evolve long necks)

Darwin himself held a form of Lamarckism, positing that cells of organism, induced by the environment, could feed “pangenes” thoughout the body in a way that could modify its inheritance. That’s why Darwin was always emphasizing “changed conditions” as a source of heritable variation. The problem with this view is that tests of environmental modification as a source of inherited variation have almost never succeeded, and even when they do, they have not created adaptations. The idea that Lamarckian inheritance is an important cause of adaptation is, to put it mildly, ridiculous. (I note here that DARWIN WAS WRONG about inheritance.)

Nevertheless, Noble persists—in the face of all the facts—to make the same tired old assertions. Click to read, and shame on IAI! 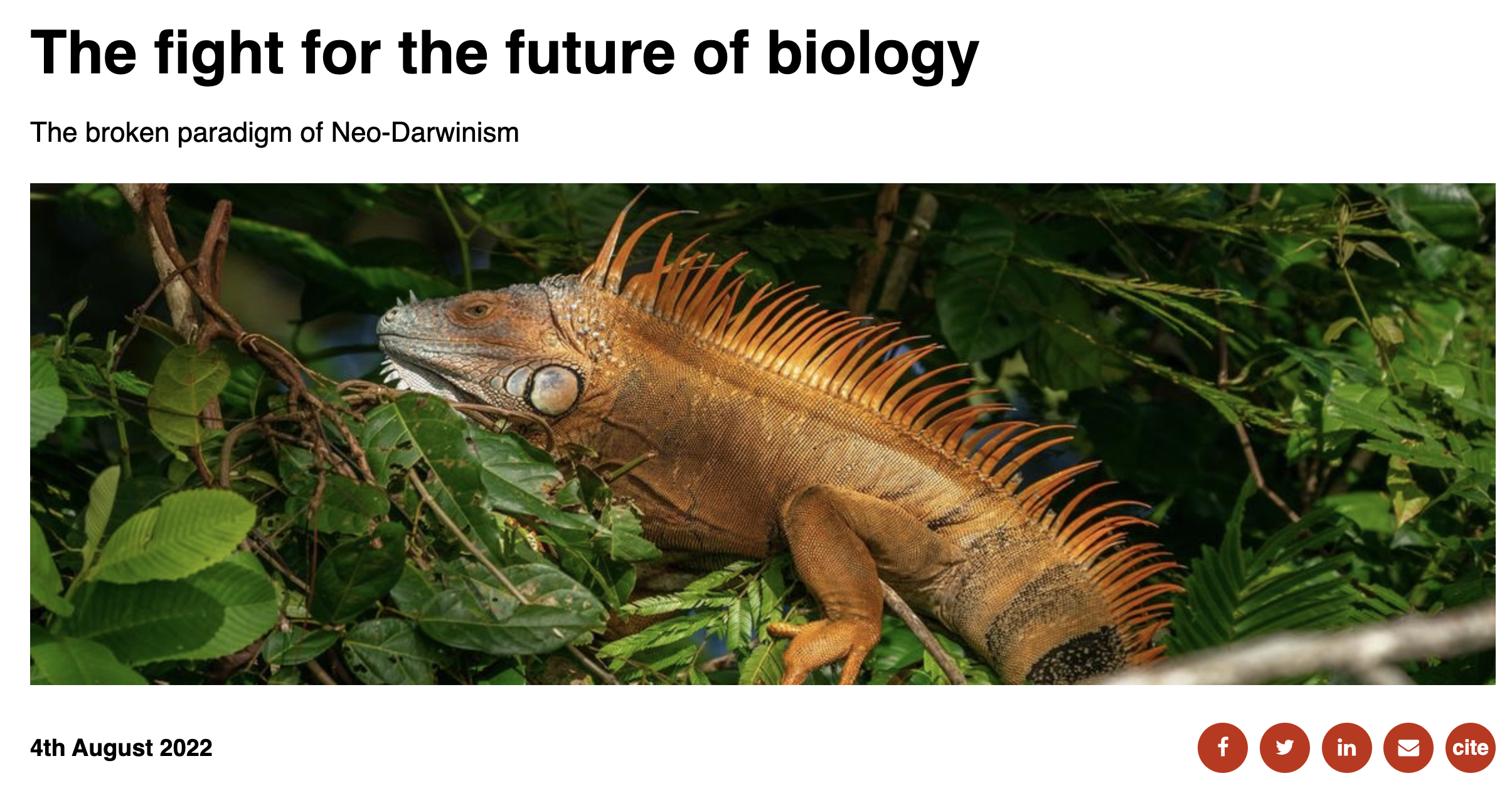 First Noble argues that environmental modifications can produce traits that become inherited, though only for a short while. This is true, but the phenomenon is rare.

Modern physiology has vindicated Darwin’s idea. The small vesicles, called exosomes or extracellular vesicles, poured out by all cells of the body can function precisely as Darwin’s idea proposed. They have now been proven to communicate such acquired characteristics as metabolic disorders, and sexual preferences, to the germ-line via small regulatory RNA molecules. We can therefore be sure that Lamarckian use-disuse memory can be passed across generations. Weismann’s assertion that the inheritance of acquired characteristics is impossible was therefore incorrect. The debate now centres on two questions: “how often this happens and, when it does, for how many generations do the changes persist?”

The standard neo-Darwinist defense against this clear break of the Weismann Barrier has been to suggest that it only happens in unimportant circumstances and persists for very few generations. There is assumed to be no permanent transmission. The DNA continues “hard” transmission while “soft” inheritance inevitably dies away.

Yes, and soft inheritance can also be mediated by epigenetic (environmentally induced) modification of the DNA, usually by putting methyl groups (−CH3) onto the DNA bases.  As Noble admits, these forms of inheritance gradually go away, with nearly all epigenetic modifications erased during the process of reproduction.  That’s one reason why this kind of inheritance can’t be the basis of long-term adaptation. But wait! Noble says that short-term adaptation is of great value!

This defence fails to recognise the great virtue of “soft” inheritance, which is precisely the possibility that it can be temporary.

Yes, and so can adaptation based on genes (think of the increase in beak size of the Galápagos finches, which was reversed in a single generation when the size-inducing drought went away). If there’s substantial variation, these reversals can be fast. But Noble fails to recognize that most adaptations hang around for many generations, and those cannot be based on “Lamarckian” inheritance. It’s almost as if Noble is claiming that this form of inheritance, by some kind of group selection, has been installed in the organism to facilitate short term adaptation!

Here’s one example that people like Noble trot out when attacking modern evolutionary theory:

Consider a species under extreme environmental stress, such as the Dutch population during the starvation winter of the 1940s in the Second World War. The inherited signs of that stress have now been passed down three generations, to the great-grandchildren of the 1940s population. The chances are that it will progressively die out as the later generations experience good nutrition. And so it should!

The “Dutch famine syndrome” was caused by epigenetic modification of fetuses in utero when their mothers were starving during the Dutch “hunger winter” of 1944-1945. I’m not sure about the three generations, but I’ll let that pass. What we know for sure is that these offspring show DNA methylation changes probably due to starvation.

BUT this was not adaptive! The epigenetic changes reduced the health of their carriers, as this article shows. From its abstract (my emphasis):

This paper describes the findings from a cohort study of 2414 people born around the time of the Dutch famine. Exposure to famine during any stage of gestation was associated with glucose intolerance. We found more coronary heart disease, a more atherogenic lipid profile, disturbed blood coagulation, increased stress responsiveness and more obesity among those exposed to famine in early gestation. Women exposed to famine in early gestation also had an increased risk of breast cancer. People exposed to famine in mid gestation had more microalbuminuria and obstructive airways disease. These findings show that maternal undernutrition during gestation has important effects on health in later life, but that the effects on health depend on its timing during gestation. Especially early gestation seems to be a vulnerable period. Adequate dietary advice to women before and during pregnancy seems a promising strategy in preventing chronic diseases in future generations.

Now is that, on top of the inherited stress, an adaptive change? I think not.

It is intellectually irresponsible for Noble to suggest that the Dutch Famine syndrome has anything to do with adaptive change, much less evolution. In fact, I know of not a single adaptation that rests on epigenetic modification. I may have missed one or two, but when adaptive genetic changes in animals (including humans) are localized, they invariably are found to rest on base-pair changes in the DNA. When you map adaptations in humans, like changes in lactase persistence or adaptive skin color, you find that they are based not on methylation or episomes or micro-RNAs, but on good old-fashioned mutations that change the sequence of DNA. And so they must be, because these changes have lasted for many generations.

It’s intellectually irresponsible of Noble not to mention that, too.

Further, Noble cites the well-known phenomenon of “genetic assimilation,” in which an environmental change exposes genetic variation that can then be subject to selection, as if this were some kind of refutation of neo-Darwinism. (One hypothetical example: if you starve plants, it may, by stunting them al, hide genetic variation for height.) Noble says that studies of genetic assimilation, which are in all the textbooks, are actually discouraged by evolutionists who don’t like their non-Darwinian implications:

Given the importance of the question, why have so few attempts been made on the genetic assimilation of “soft” inheritance since Waddington’s work? The answer is that funding organisations would not be willing to support such work. If you submit a Lamarckian inheritance project to standard grant bodies, you will be almost certain to receive a firm rejection. Such is the hold of the Neo-Darwinian paradigm on innovative ideas in evolutionary biology.

Get this straight, Dr. Noble: GENETIC ASSIMILATION IS NOT LAMARCKIAN INHERITANCE! As every evolutionist with more than a handful of neurons knows, in these cases the environment exposes standard DNA mutations, allowing them to be selected in the classical neo-Darwinian fashion.

Once again we smell the odor of intellectual mendacity in Noble’s prose.

At the end, Noble beefs about how a 2016 Royal Society symposium he organized, on “New trends in evolutionary biology: biological, philosophical, and social science perspectives,” was protested by 20 other fellows of the Royal Society.  He couches this as censorship against discussing new ideas, but he’s wrong. Many of the speakers at the symposium were touting ideas that had already been already refuted, and the purpose of the meeting was to show that neo-Darwinism is dead. It’s as if there were to be a Royal Society symposium on Intelligent Design (the ID people, by the way, loved that symposium). Of course one would object if someone who knows jack about evolutionary biology organizes a symposium designed to dismantle its modern form. It’s like a fox organizing a symposium on how to breed chickens.

I’m not saying that Noble has no right to weigh in on modern evolutionary biology simply because he was a physiologist. No, I’m asserting that Noble’s claims about the death of modern evolutionary biology should be ignored because there is virtually no data to support them.  His claims should be ignored because he is ignorant, and willfully so. (Others have corrected him many times.)

I’m through with Noble; he says the same thing over and over again, tilting at the windmill of modern evolutionary biology with a soda straw. I probably should have ignored Noble’s mush, but the laws of physics compelled me to write. At least the readers here can be aware of his numerous errors and misstatements, even if Noble plays the same tune until he’s underground.