Reader Miriam brought my attention to an editorial in Science that, for once, is not offensively woke. In fact, it’s hilarious, using the trope of the famous books/cartoons of Archy and Mehitabel, created by writer and humorist Don Marquis. Appearing in newspapers and then in books from 1916 to 1937, when Marquis died, the lucubrations of the two animals was wildly popular. When I was very young, our neighbors had a cat named Mehitabel, and investigating that name brought me to the books, which I devoured. Read at least one!

Someone at Science has a great sense of humor, for I found from 2007 an “editorial” by the pair on cat domestication, addressing an article in the same issue. Mehitabel the cat ordered Archy to the typewriter to object to a scientific piece on cat domestication.  I hope Science doesn’t mind if I reproduce the editorial—written in perfect Archy-an prose—in its entirety. The introduction explains the absence of caps and punctuation. 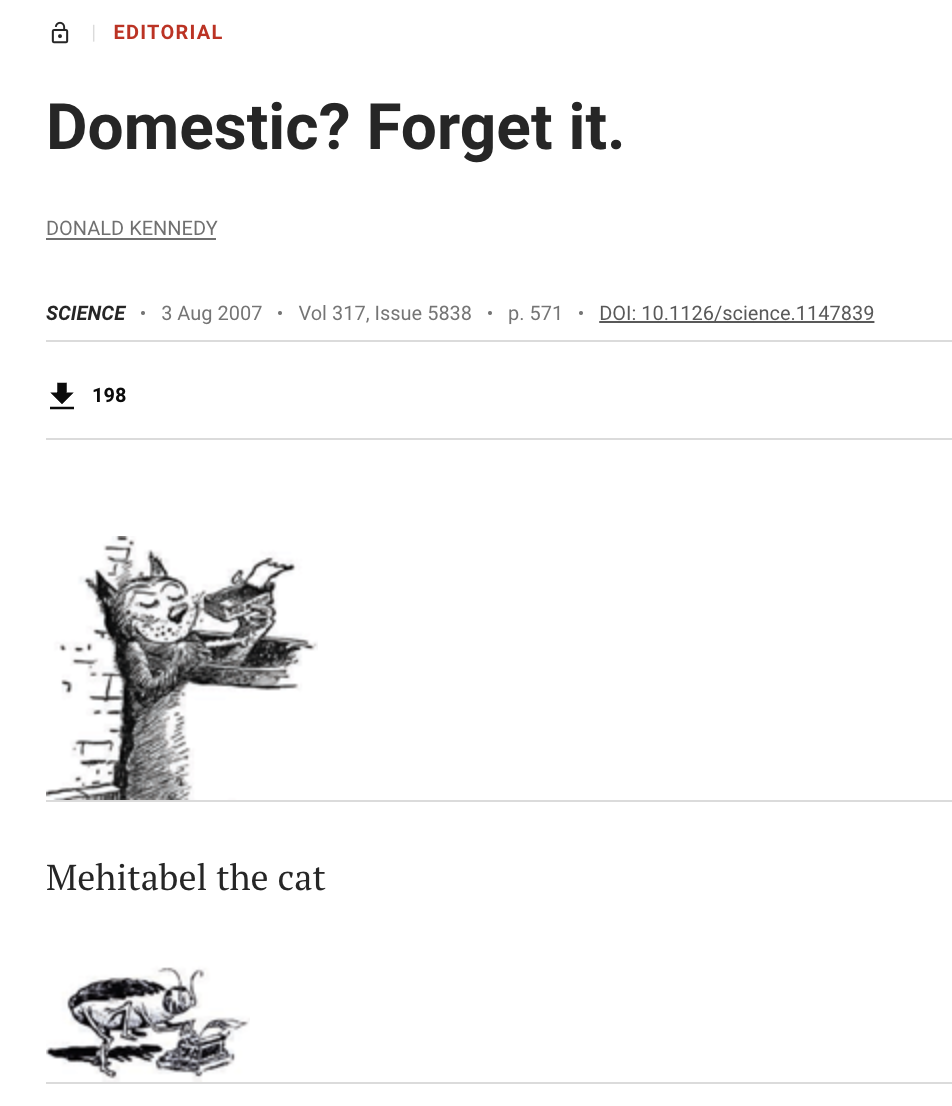 Science’s intro, with a link to the 2007 paper under discussion (it shows from genetic analysis that cats were domesticated in the Near East, and all domestic cats originate from at least five “founder” cats in this region):

Readers old enough to remember Don Marquis’ syndicated New York Sun columns may recall that at night, a cockroach named Archy took over his typewriter to write short pieces about him and his friend, a cat named Mehitabel. Because he typed by diving on the keys, he had difficulty with upper case and punctuation, yielding a rather free-form text. In the following message forwarded to us, Mehitabel is apparently responding to recent findings on the genetic background and history of cat “domestication” (Science, 27 July 2007, p. 519).

boss, i sent archy to the keyboard to say how upset I am about the terrible treatment of cats in the papers it’s because of a report in science telling all about how we cats got started pretty interesting but some of the papers are saying that’s how we got domesticated domesticated hell domesticated is for dogs not us boss action needs to be taken against this slander these scientist guys did a good thing they found that the first real house cat was not that pampered egyptian pussy instead they showed our relationship with people was much older thank god for that then they looked at genes of us cats and compared them with the five small wildcats and decided we all came from the one in the middle east maybe an arab cat their idea is that the first farmers ten thousand years ago started storing grain that brought in rats and mice so then this arab cat helped out some papers call that domestication that nonsense has gotta be stopped this was a gift not some ownership deal why do they think today we occasionally bring a bloody present into the house and lay it on the bed or the best rug it’s because we want to remind everyone that we are volunteers not repressed conscripts like the damn rovers and fidos just look at how they act wagging their tails and begging for food talk about deal they got one okay but they lost their independence not me and my kind no sir heres the thing about us cats we think it’s fine in the house but we’re just as happy in the alley or out hunting when we do that they call us feral ever hear anyone call a dog feral by the way hell the feral dog is a coyote not some lost rover get it our gig is about independence pet us a little thats okay even pimp us up for the cat show but make one of those ownership moves and sayonara we’re gone we think the scientists got it right about what went down back then in the fertile crescent after the mice got after the einkorn wheat or whatever pretty soon our ancestors were chomping em up well you might ask did they see any dog fossils in there what was old rover doing not much it appears maybe practicing pointing rats or rolling over for the farmers well when the going gets tough only the tough get going us cats are okay with the publicity but when the science story got out into the mainstream media what was said was downright disrespectful domestication indeed we don’t like to be dissed boss so get off your editorial ass and do something about this nonsense

14 thoughts on “Mehitabel the cat writes into Science”