Christopher Rufo, a conservative who writes for the conservative City Journal, has a report about schools in Portland, Oregon that would be unbelievable if he didn’t provide ample documentation. This issue is the kind of indoctrination—for that’s how I see it—that Portland students get in elementary school from kindergarten through grade 5.  This means that the material is given to children from age 4-11, children who are quite young.

I’ll let you read it for yourself; it’s short and explains what is expected at each grade level. Here’s Rufo’s introduction:

Portland Public Schools has launched a war against the “gender binary” and adopted a radical new curriculum teaching students to subvert the sexuality of “white colonizers” and begin exploring “the infinite gender spectrum.”

I have obtained a cache of documents from a source inside Portland Public Schools that exposes the nature of this curriculum. The lessons seek to turn the principles of academic queer theory into an identity-formation program for elementary school students; it has been adopted in many of the district’s K-5 classrooms.

The premise is simple: privileged white heterosexuals have created an oppressive gender system in order to dominate racial and sexual minorities. As the curriculum explains, “gender is colonized,” and Western societies have used language to erase alternative sexualities. “When white European people colonized different places, they brought their own ideas about gender and sexuality,” the curriculum reads. “When the United States was colonized by white settlers, their views around gender were forced upon the people already living here. Hundreds of years later, how we think and talk about gender are still impacted by this shift.” (When reached for comment, Portland Public Schools wrote: “We make certain that our curriculum is LGBTQ+ inclusive for students who identify as transgender, gender non-conforming, gender-queer, and queer to create a safe and inclusive environment for all of our students.”)

And you can see all this in the documents here (a better link than the one to the “cache of documents” in Rufo’s piece above), along with the age groups recommended for each set of lessons. Rufo summarizes them briefly in his piece, and you should read his take, checking up from the official curriculum at the preceding link. His take is pretty much on the money.

What bothers me most is that at the end of the fifth grade, students must pledge themselves to social change in the obvious ideological directions. Rufo:

By the end of fifth grade, the curriculum explicitly asks students to make a “commitment to change,” according to the dictates of gender ideology. Students receive a list of six commitments, including: “I commit to learning more about what LGBTQIA2S+ words mean and how they have changed over time”; “I commit to learning about the history and leadership of Black trans women”; “I commit to practicing pronouns and correcting myself EVERY time”; “I commit to attending QSA/GSA and being a leader at my school”; and “I commit to watching and reading books, movies, and TV shows that have LGBTQIA+ characters.” In other words, they commit to becoming political activists for queer theory and the broader sexual revolution. 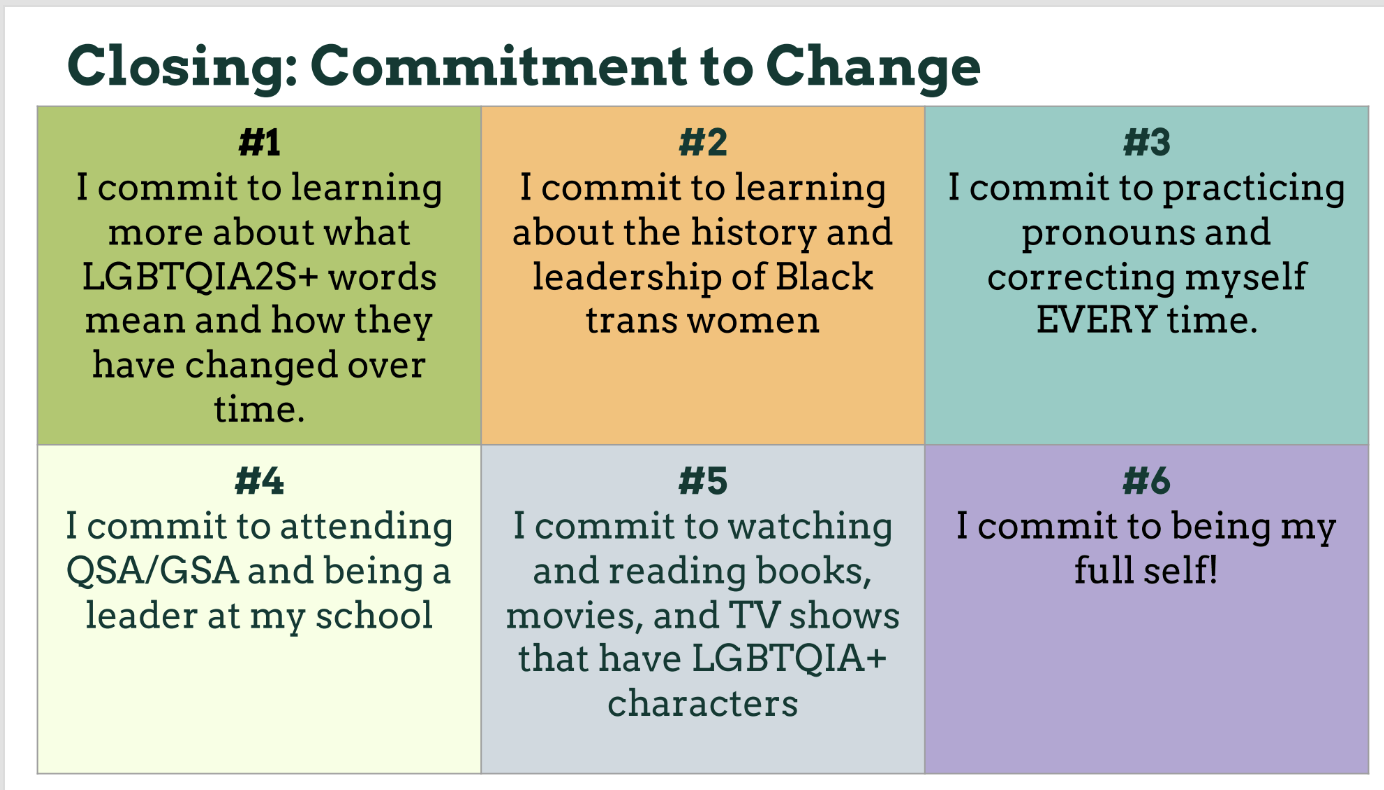 Is this a reasonable way to teach children from ages 4-11? I don’t think so; I see it as a form of indoctrination into extreme gender theory. Some of it should go into health class, but this is a full-court press, and is inappropriate and propagandistic. Nowhere do the kids get to question a doctrine being rammed down their throats.

Moreover, once this gets out, and it will, it’s going to be used against Democratic candidates far and wide. It was, after all, a product of a Democratic school system.  And if people get riled up about anything, it’s about people propagandizing their children. Just imagine the Virginia gubernatorial election as a paradigm of what could happen.