We’re beginning to run a tad low on photos, so if you have some good ones, send them in, please.  Do I have to beg? (I will!)

Today’s batch comes from reader Scott Goeppner. His captions and IDs are indented, and you can enlarge the photos (as you can with all photos) by clicking on them.

Attached are some photos of invertebrates taken around Stillwater Oklahoma this summer.

First are some photos of Widow Skimmers (Libellula luctuosa), a common dragonfly in Stillwater during the summer. The species is sexually dimorphic. Freshly emerged individuals and females have a pretty yellow and black coloration as shown below: 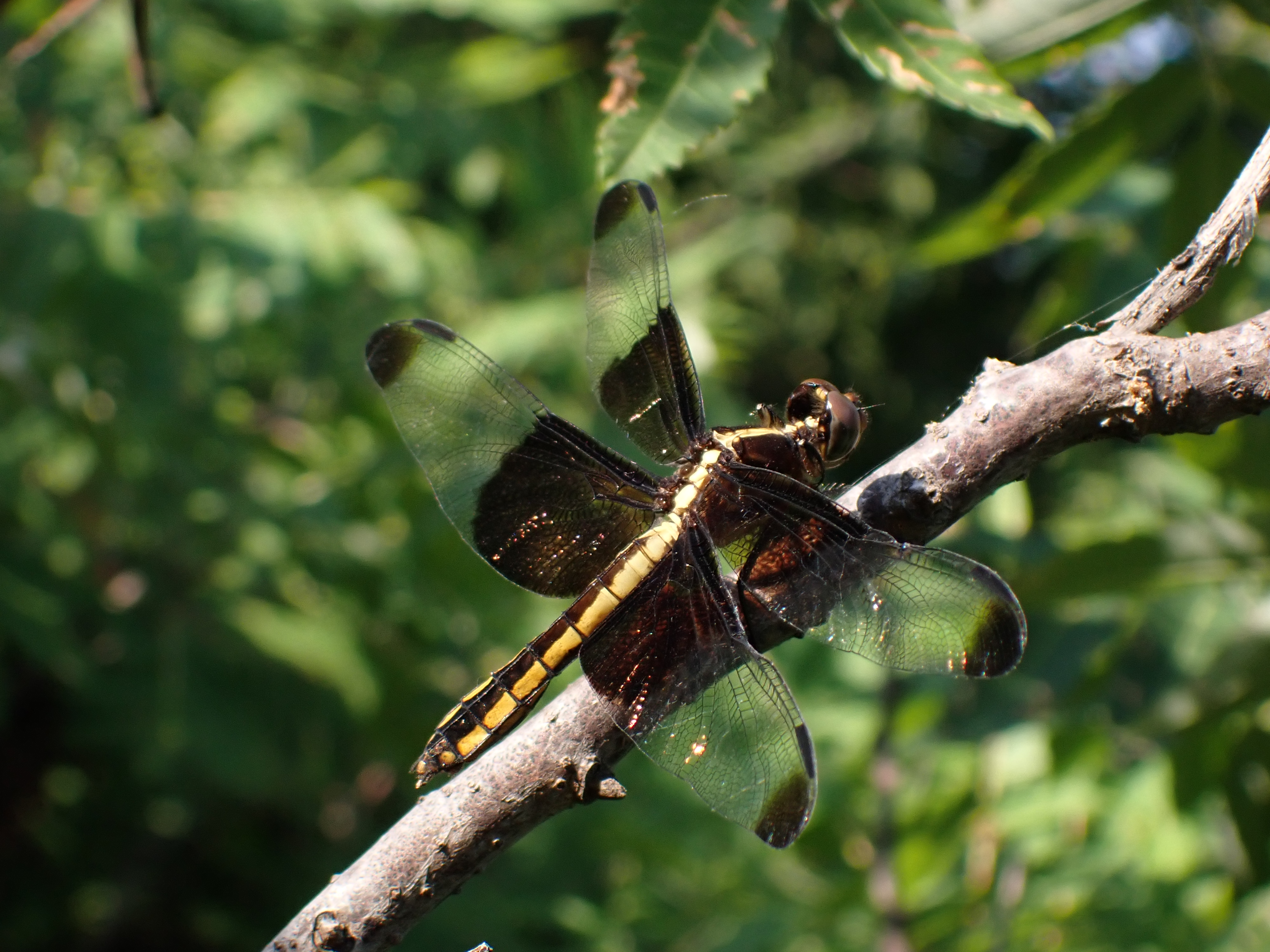 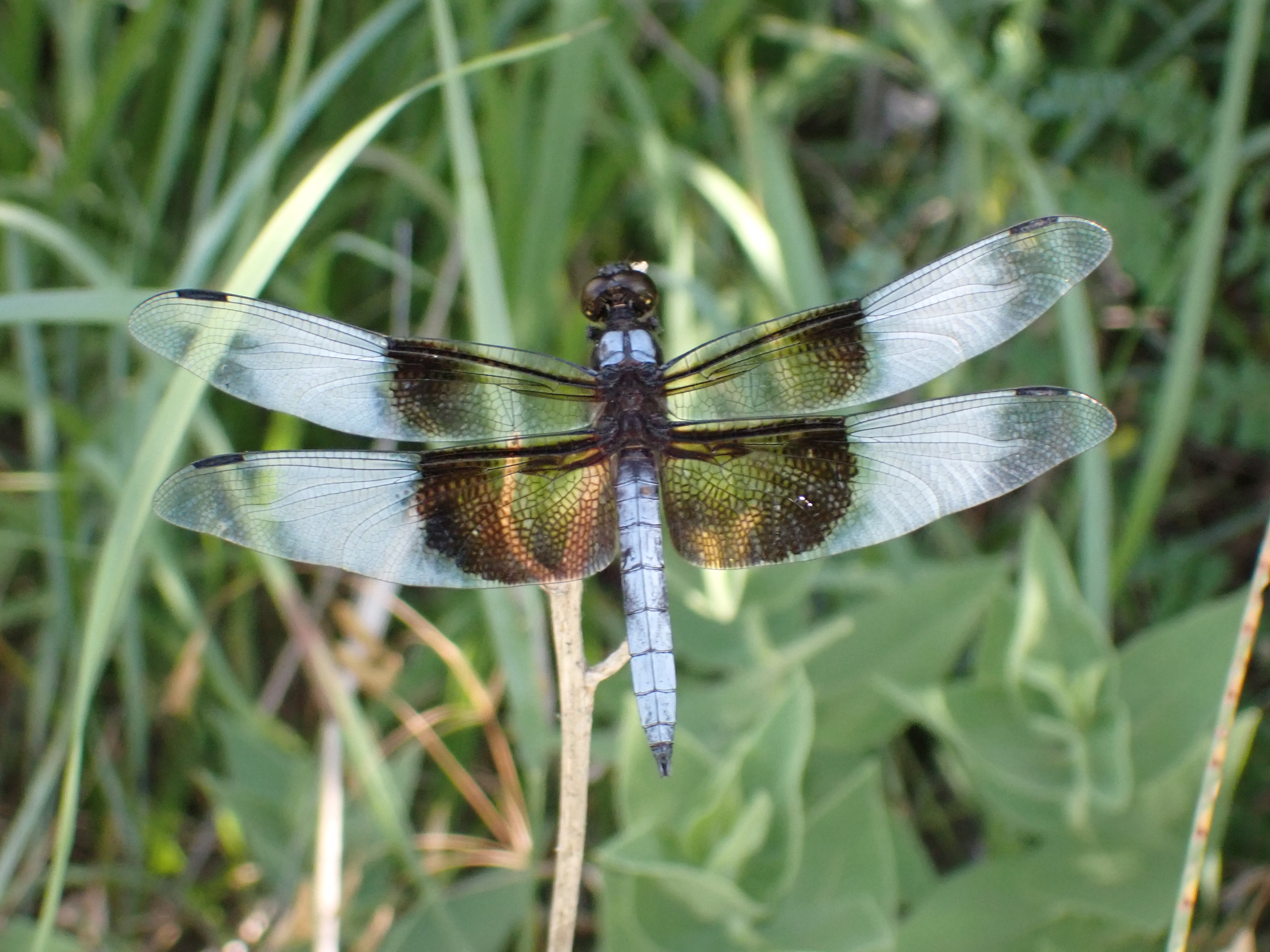 Normally these dragonflies are not happy to see me and rapidly fly away if I try to get too close to them. However about a month ago I visited Sanborn Lake here in Stillwater on a particularly windy morning, and found a widow skimmer clinging to some vegetation and trying not to get blown away. This individual allowed me to get very close to it without flying off and afforded me a rare opportunity to get some closeups of its face and enormous eyes. 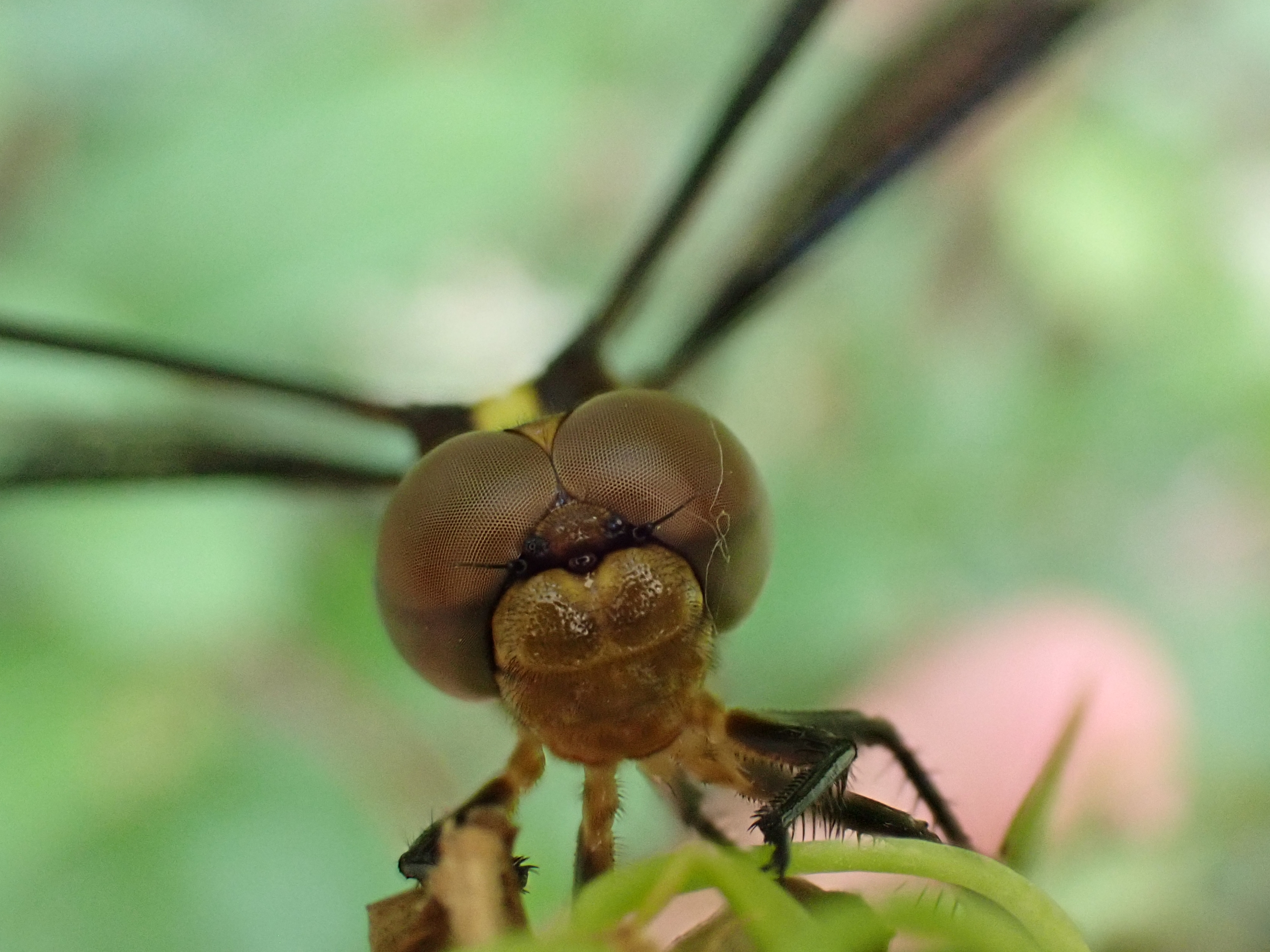 Next is a six-spotted fishing spider (Dolomedes triton) photographed at night in the Teal Ridge wetland in Stillwater. This one was sitting very still on the surface of the water and apparently waiting to ambush some unfortunate prey. 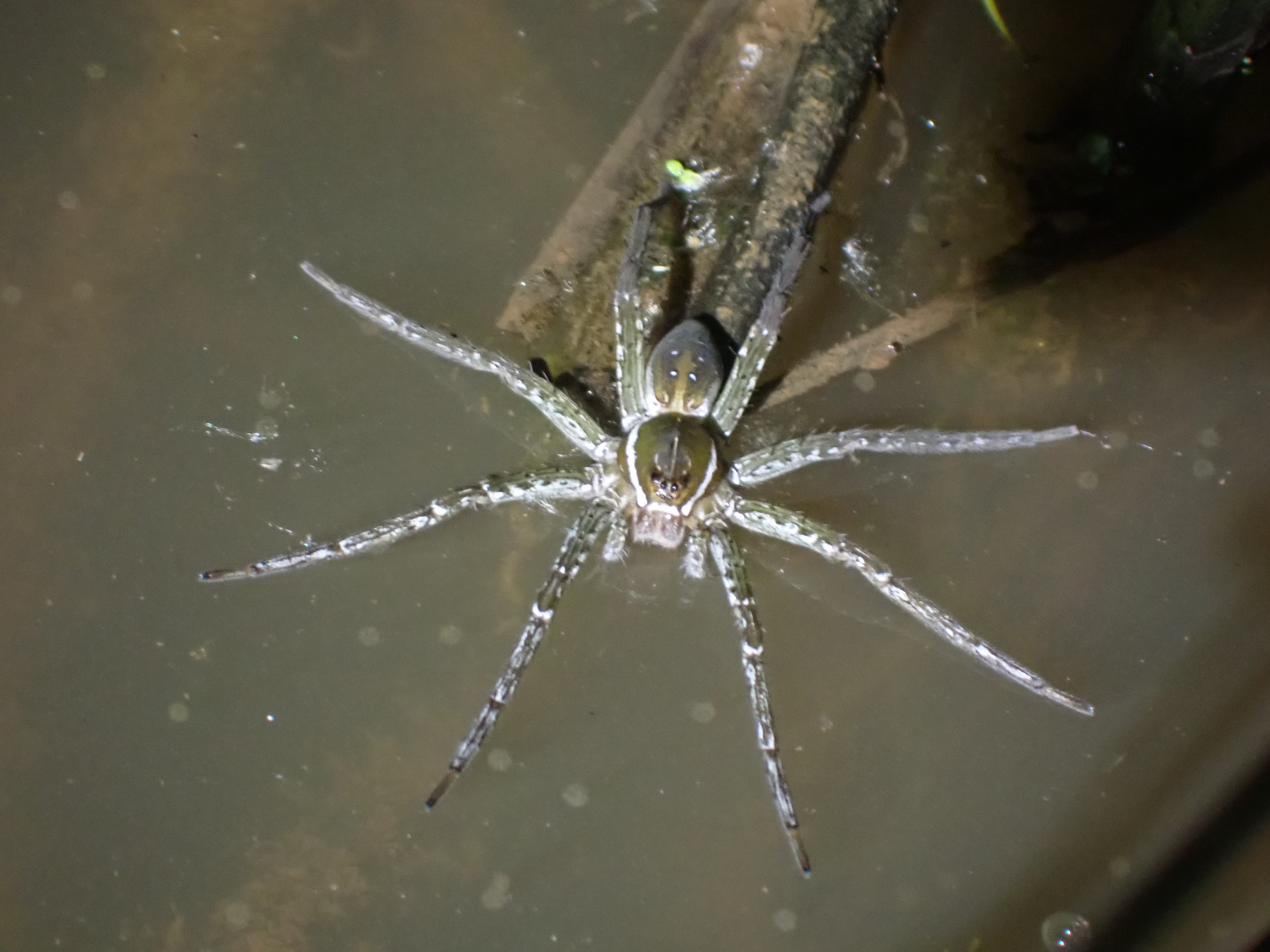 The next three photos are of two common freshwater snails, taken at Sanborn Lake. The first two are Physa acuta, otherwise known as the “fruit fly of malacology”. They have this status because, like fruit flies, they are easy to culture in the lab, reach reproductive age rapidly (as soon as 4-5 weeks after hatching) and produce large numbers of eggs. They also respond readily to water borne predator cues from predators such as crayfish and sunfish and are used in studies of anti-predator behavior and shell morphology. 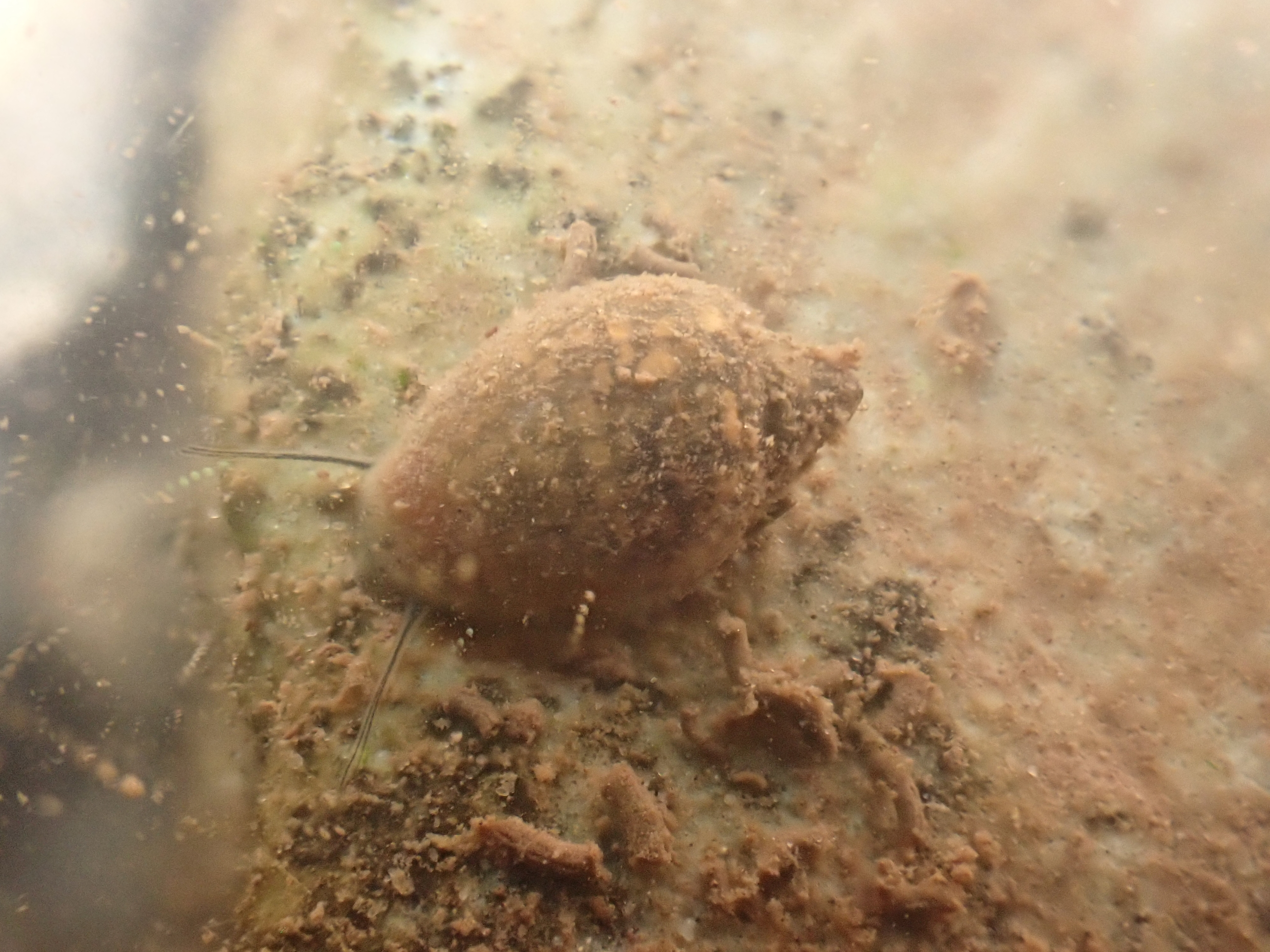 This one shows the snail’s eyes. Notice that like most aquatic snails they are at the base of tentacles rather than on the tips of the tentacles. 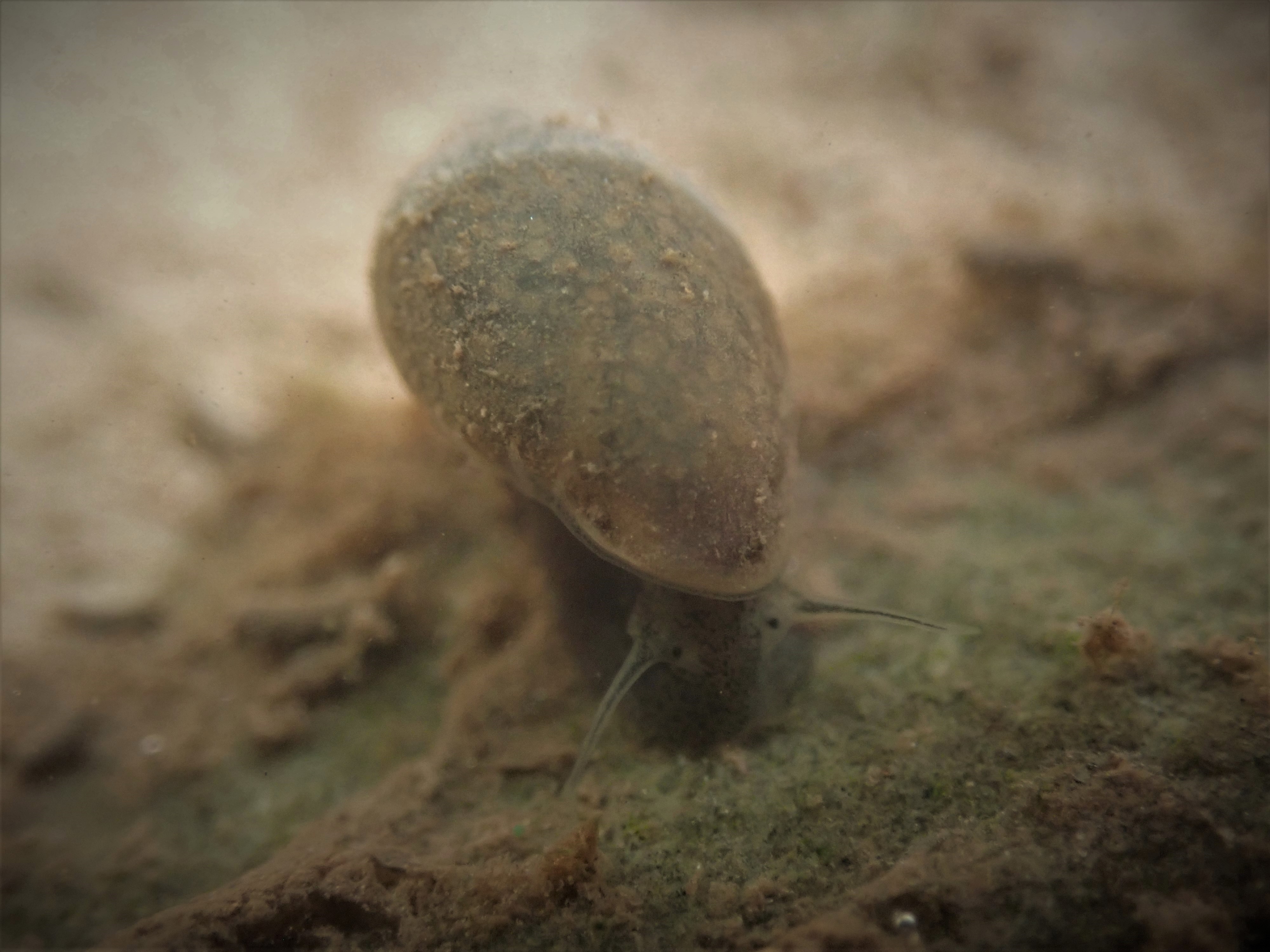 The third is a ramshorn snail, most likely Planorbella trivolvis. These are common aquarium snails that are great at controlling algae growth. 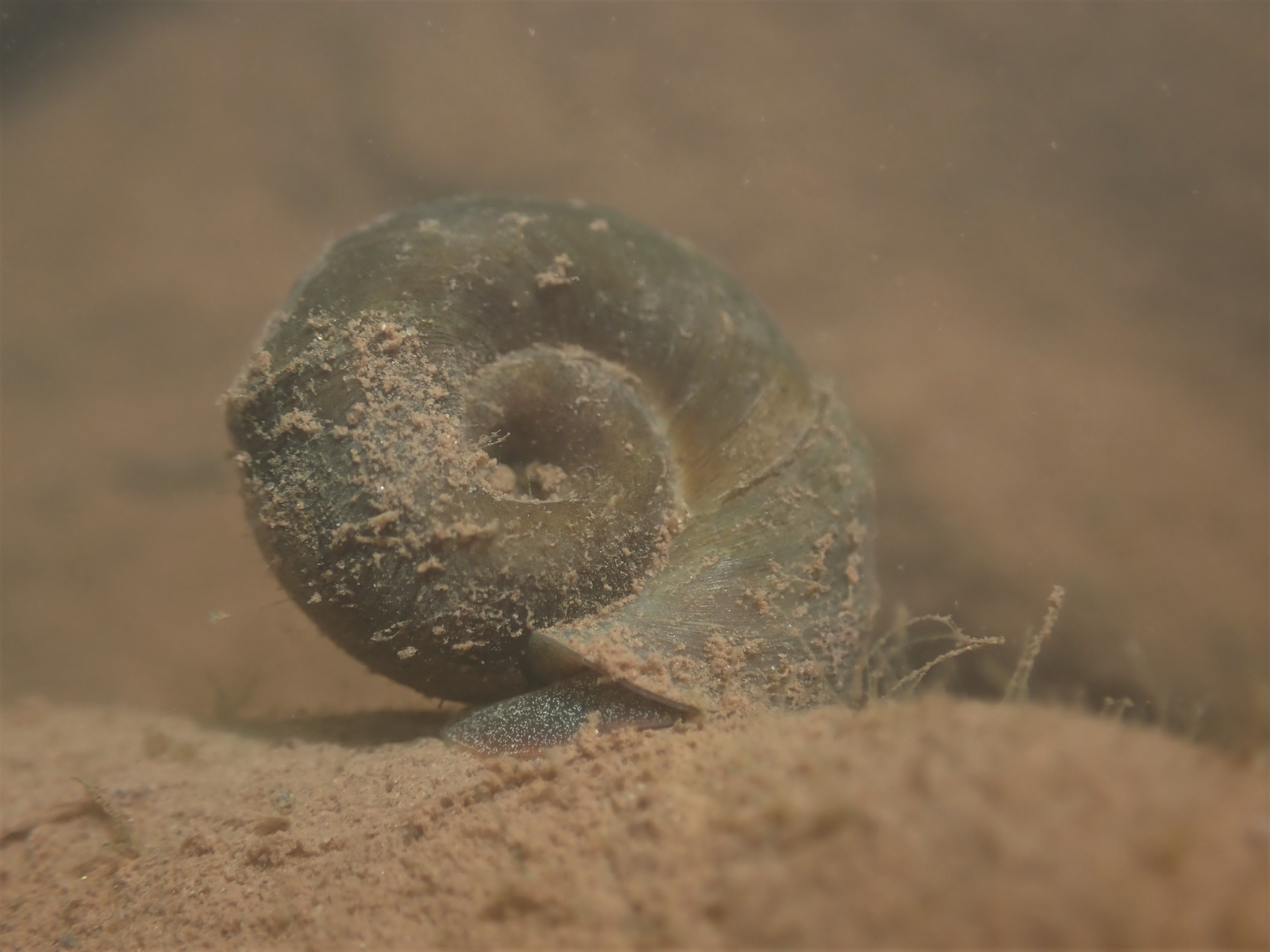 Finally I’ll end with some miscellaneous photos of insects. 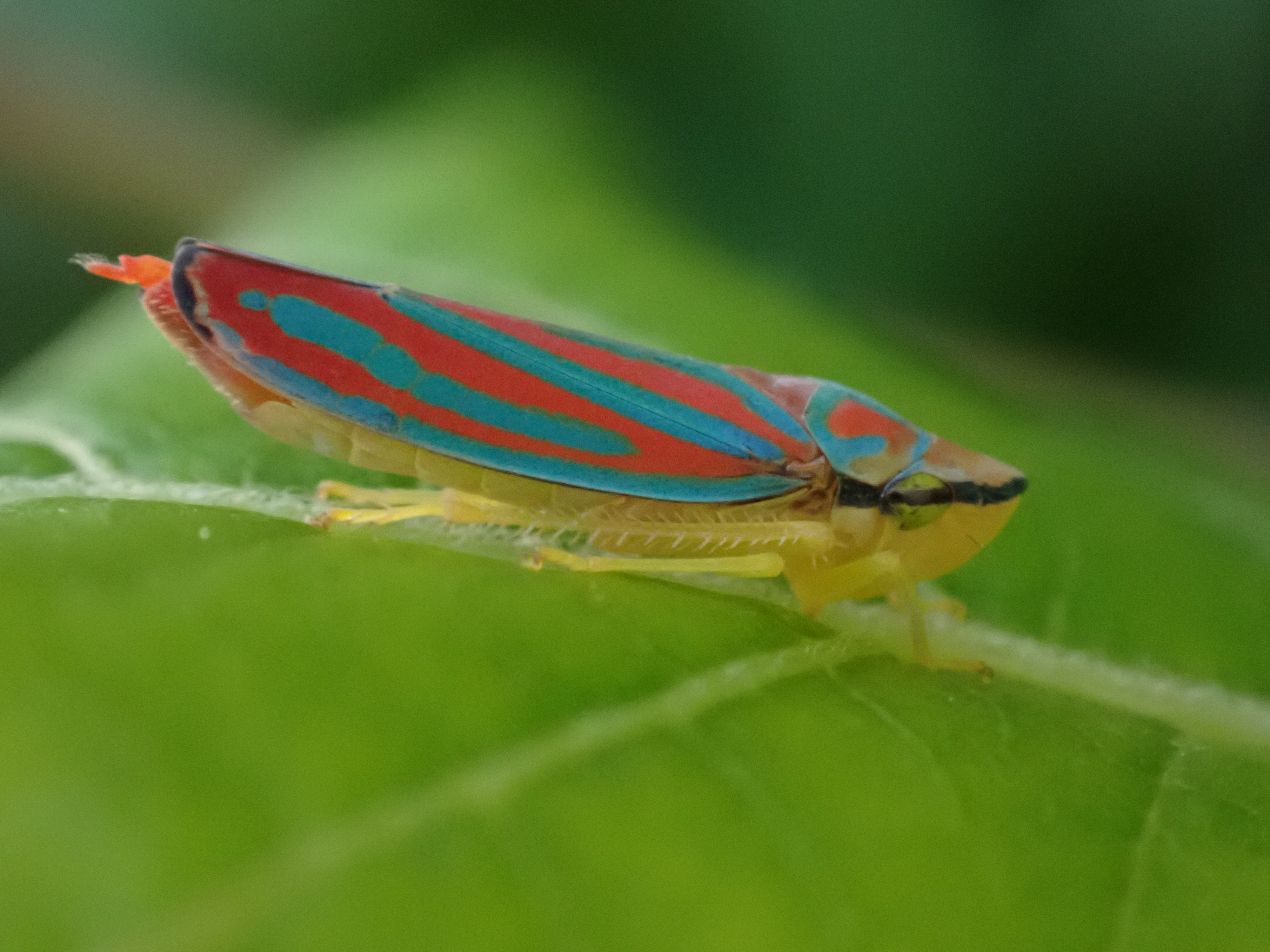 Robber fly (Family Asilidae). These large flies aggressively attack and eat other insects. I do not know the species; if it is possible to ID from the photo, please feel free to identify it. 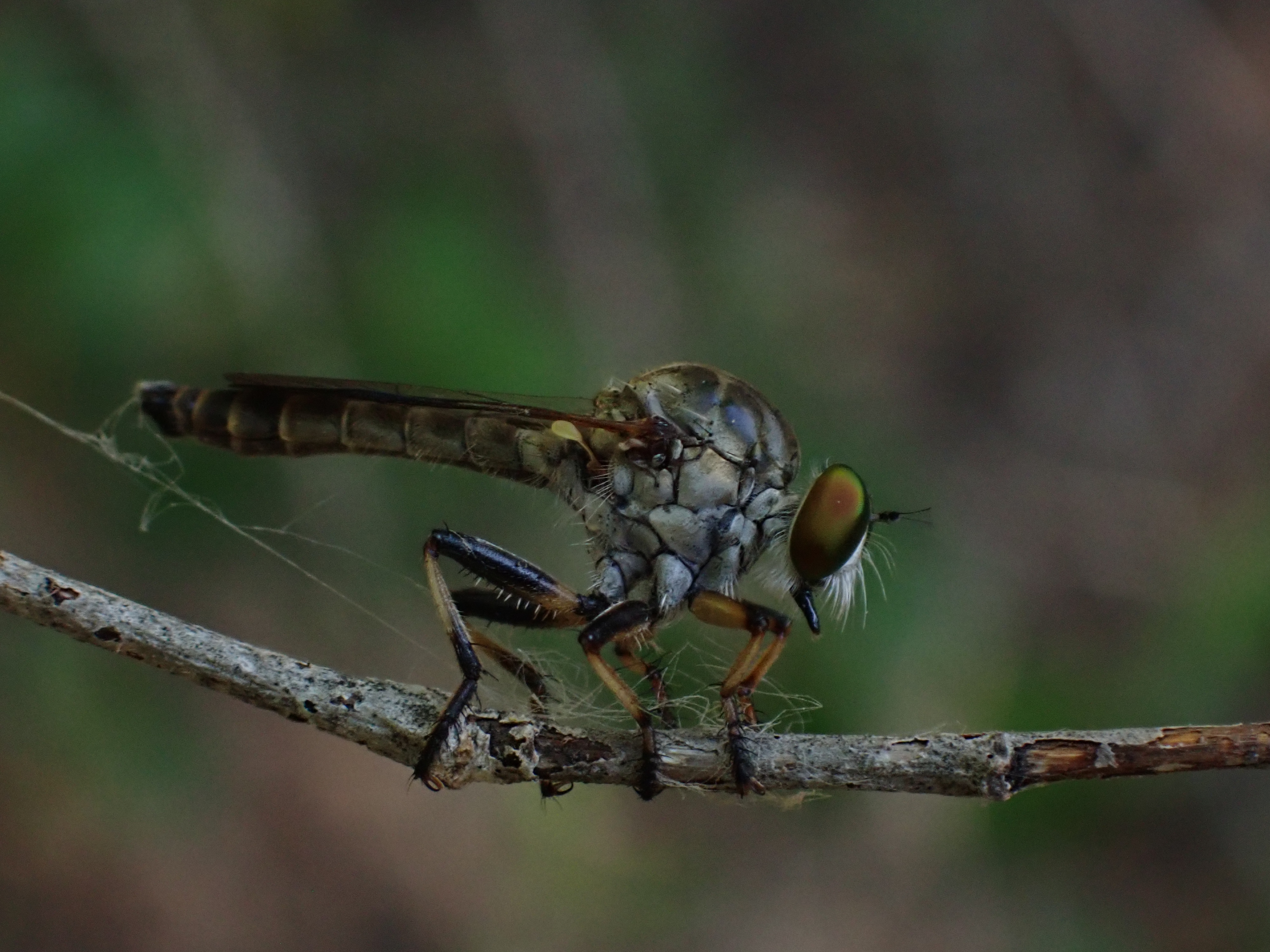 Sinuous bee fly (Hemipenthes sinuosa). I wish all insects were as cooperative as the sinuous bee fly. This one politely landed in a well-lit spot on the ground and stayed perfectly still to be photographed. 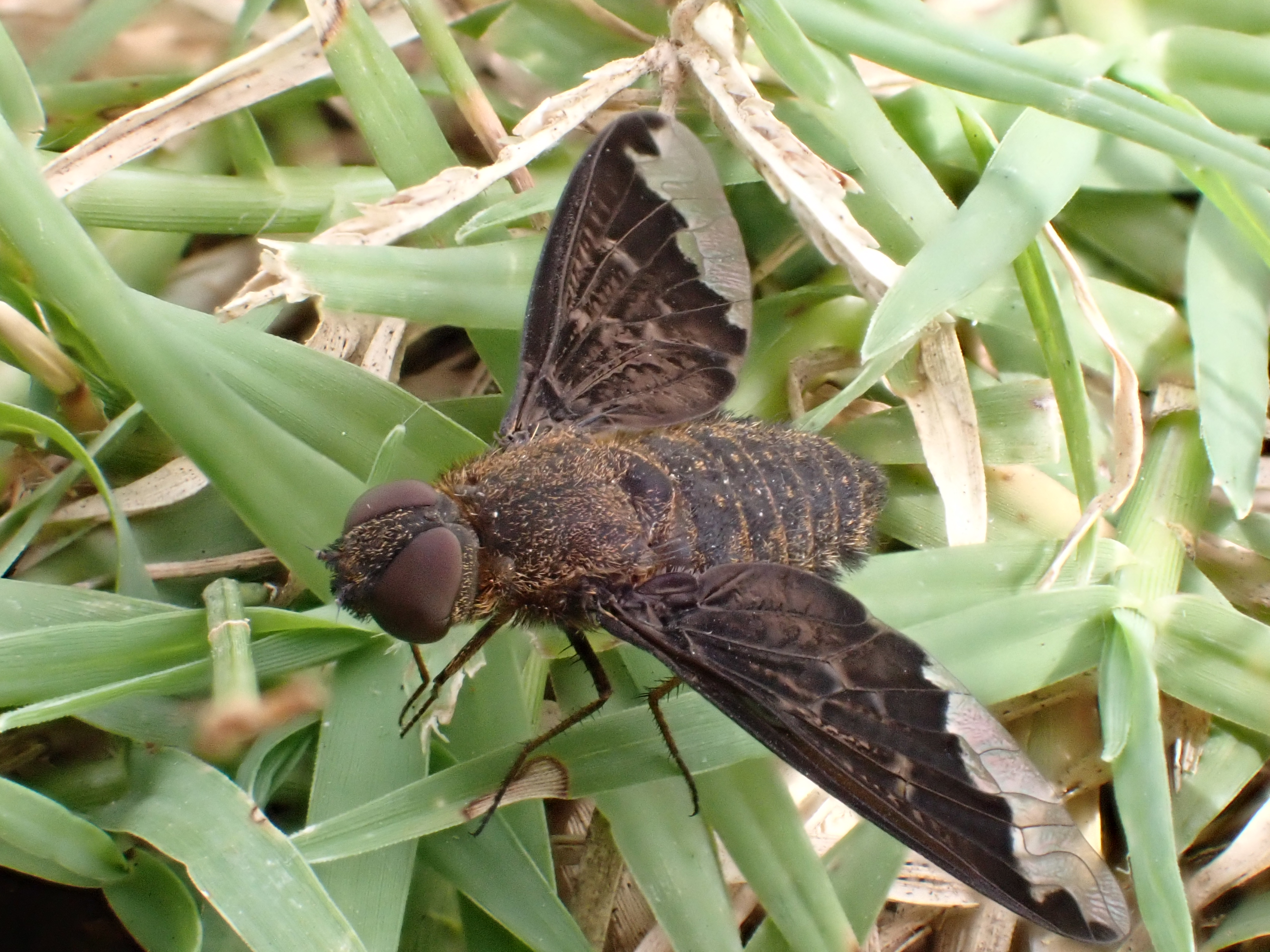 I don’t know how many readers will be interested in my camera information, but if they are all of these photos were taken with an Olympus TG-6 camera, which is rugged, waterproof, and takes very good macro photos.