“Horizontal gene transfer”, henceforth “HGT”, is the process whereby a gene is moved between species by methods other than direct reproduction (the latter is called “vertical gene transfer”). Today I’ll write about a new survey published in Cell, trying to find out how often this process moves genes into the DNA of insects.

It’s surprisingly common, and the authors found one case in which a gene transferred into Lepidoptera from bacteria seems to help moths and butterfly males get mates. But HGT is not common enough to screw up the evolutionary trees of insects. As I said, it’s commoner than I thought, but it’s still pretty damn rare.

(I note that you can have gene transfer between species via reproduction, too, if you allow for a little bit of interbreeding between “species”. Although I think that Neanderthals should be considered members of our own species H. sapiens, we did have some vertical gene transfer in the past when members of the two groups mated. The hybrids passed on their genes to modern humans, and the result is that is that many of us carry a few Neanderthal genes. That’s via reproduction, though, not infection, which is the way HGT occurs.)

Typically, in HGT a bacterium, virus, or other microorganism that lives within a eukaryote host transfers some of its own genes into the host genome, or, in some cases, acts as a vector carrying genes from other organisms, including fungi, plants, or other animals.  But HGT is not really a “non-Darwinian process” that results in a drastic revision of the Modern Evolutionary Synthesis. No, Darwin didn’t know about this—he didn’t know about genes, either—but we can consider the introduction of a novel gene from a very different species as a type of mutation (granted, a big one), producing variation in the recipient species that can be acted on (increased or eliminated) by natural selection, or which could be “neutral”, neither enhancing nor reducing fitness.

And although HGT in principle could mess up evolutionary trees if it were very common, that doesn’t seem to be the case. In fact, HGT doesn’t occur that often, and is actually detected by finding a gene in an organism that, via sequencing, looks as if it came from a different species. Seeing such a discrepancy depends, as it did in this study, in knowing evolutionary trees. We wouldn’t be able to detect HGT if trees were all messed up by the process.  So, no, this new paper doesn’t show that “Darwin was wrong”, much as the Kuhnians want that.  I’ll emphasize this at the end!

With that out of the way, what do we know about the process of HGT? We know that it can be effected by various vectors, usually microorganisms, occurs in a lot more species than we thought, is a fairly recent discovery, and on occasion can create “mutations” that are good for the recipient species. It’s especially widespread among bacterial “species,” in which lots of genes, including antibiotic resistance genes (unfortunately for us) can be transferred widely. That’s how bacteria can quickly evolve resistance to new antibiotics: genes for resistance, favored by natural selection, can be spread among several species via HGT.

What about organisms with true cells—the “eukaryotes”? We know about lots of cases of HGT (see the Wikipedia article on HGT for a good summary), but only three in which HGT has transferred a gene that rose in frequency in the new host by natural selection. Here are the examples cited by Li et al.:

In addition to pieces of symbiont genomes introduced into insects via HGT, some studies have reported the transfer of a single or few genes from fungi, bacteria, plants, and viruses (e.g., Boto, 2014; Husnik and McCutcheon, 2018; Irwin et al., 2022; Perreau and Moran, 2022). The functions of these transferred genes appear ecologically important; for example, carotenoid biosynthesis genes transferred from fungi to aphids contribute to aphid body coloration (Moran and Jarvik, 2010), genes that neutralize phenolic glucosides acquired by whiteflies from plants contribute to whitefly detoxification capabilities (Xia et al., 2021), and a parasitoid killing factor gene transferred from a virus to lepidopterans contributes to lepidopteran defense (Gasmi et al., 2021).

As far as we know, then, the vast majority of adaptations within eukaryotic species arose not via HGT, but via simple mutations in genes already present on a species’ genome: the “Darwinian way.”

However, research on HGT has been spotty, often highlighting single case studies. Now, a group of 13 authors from China have published a systematic survey of insects, examining the possibility of HGT in 218 species taken from 11 of the 19 orders of insects.

Click on the screenshot below to read the article for free, get the pdf here, or click on the reference at the bottom. If you can’t access the article, a judicious inquiry might yield a pdf.

The authors looked for horizontally transferred genes by examining whole-genome sequences of species and looking for regions of the DNA where an insect’s genome was not related to other insects in its group, but to a very distant group: a discrepancy in the “family trees” of genes. They then determined the protein sequences of those putative products of HGT to ensure that the genes that were transferred actually did something—i.e., make a protein.

They found that among the 218 species, 192 had protein-coding genes horizontally transferred from other species. This transfer involved 1,410 genes in 741 transfer events (more than one gene can be transferred in a single event). Most of the genes inserted into insect DNA came from bacteria: here’s the rundown:

Sources of HGT genes in insects:

As one would expect—given that virtually every animal harbors bacteria, and because bacteria are good at transferring their genes to other genomes as well as acquiring genes from hosts—we see the bulk of HGT-transferred genes coming from bacteria. It’s likely that genes from fungi or plants were transferred by viruses or bacteria, but there can also be direct transfer in a variety of ways, including ingestion. See the section on “eukaryote to eukaryote transfer” in Wikipedia, which also notes that there’s a possibility that some of our own genes are there because of HGT:

One study identified approximately 100 of humans’ approximately 20,000 total genes which likely resulted from horizontal gene transfer, but this number has been challenged by several researchers arguing these candidate genes for HGT are more likely the result of gene loss combined with differences in the rate of evolution

Not all groups of insects are equally susceptible to HGT. Here’s a figure you should enlarge, showing the phylogeny of insects studied, with the height of the bars representing the number of genes in each species acquired by HGT.  You’ll have to click on this one to see it all. But what’s clear, even in a small figure, is that Lepidoptera (butterflies and moths) carry a lot more horizontally transmitted genes than insects in other orders (look from 3-6 o’clock below): 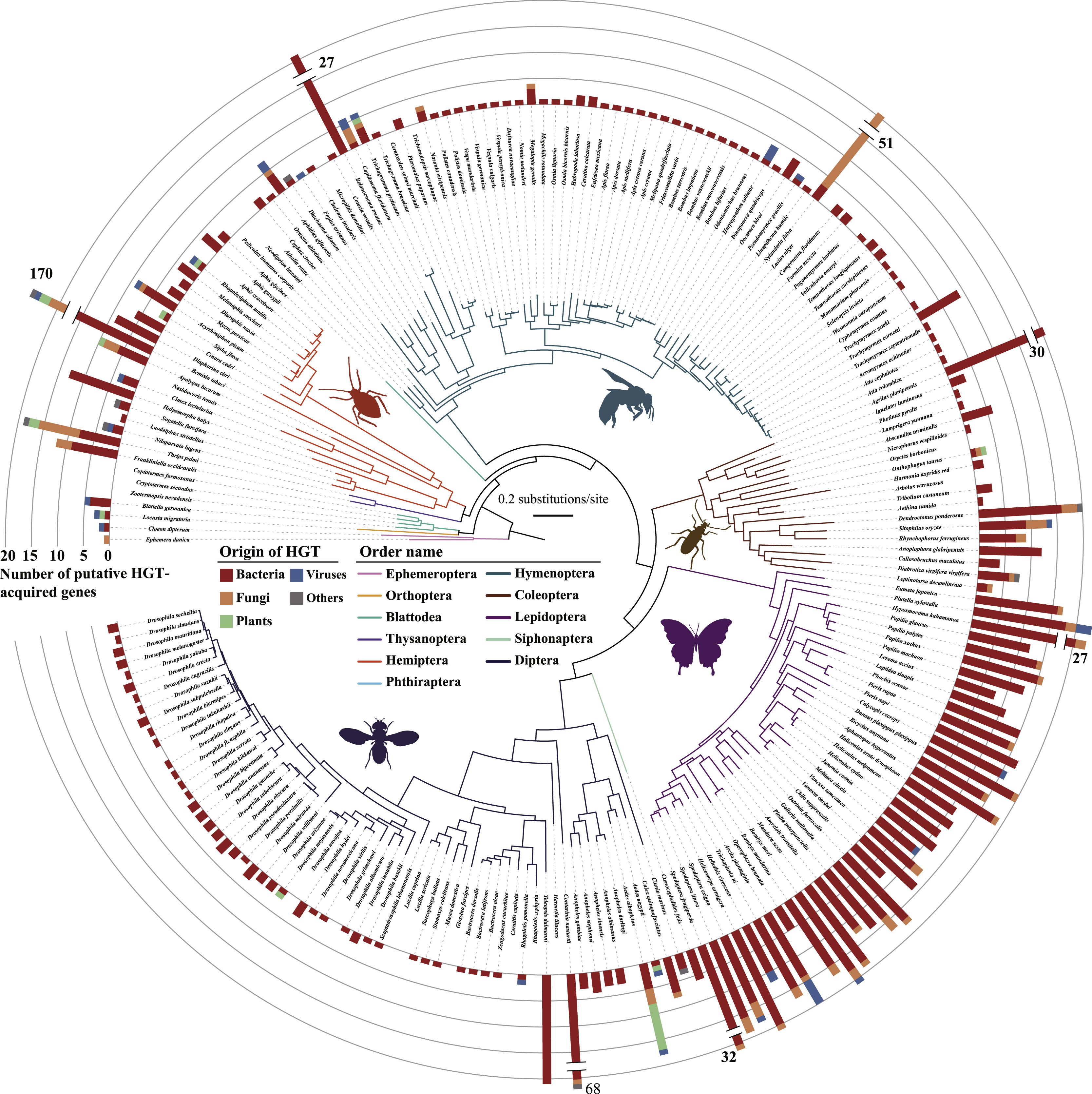 Many of the “HGT genes” in different Lepidopteran species are the same ones, implying that they had already been put via HGT into the common ancestor of the group and then were transferred vertically through reproduction, distributed into the various butterfly and moth species that evolved later. One of the transferred genes seemed to have adaptive value in Lepidoptera; more on that shortly.

Here’s a figure of who the donor species are. The overall picture was given in my list above, but this shows which subgroups of bacteria are the major vectors: 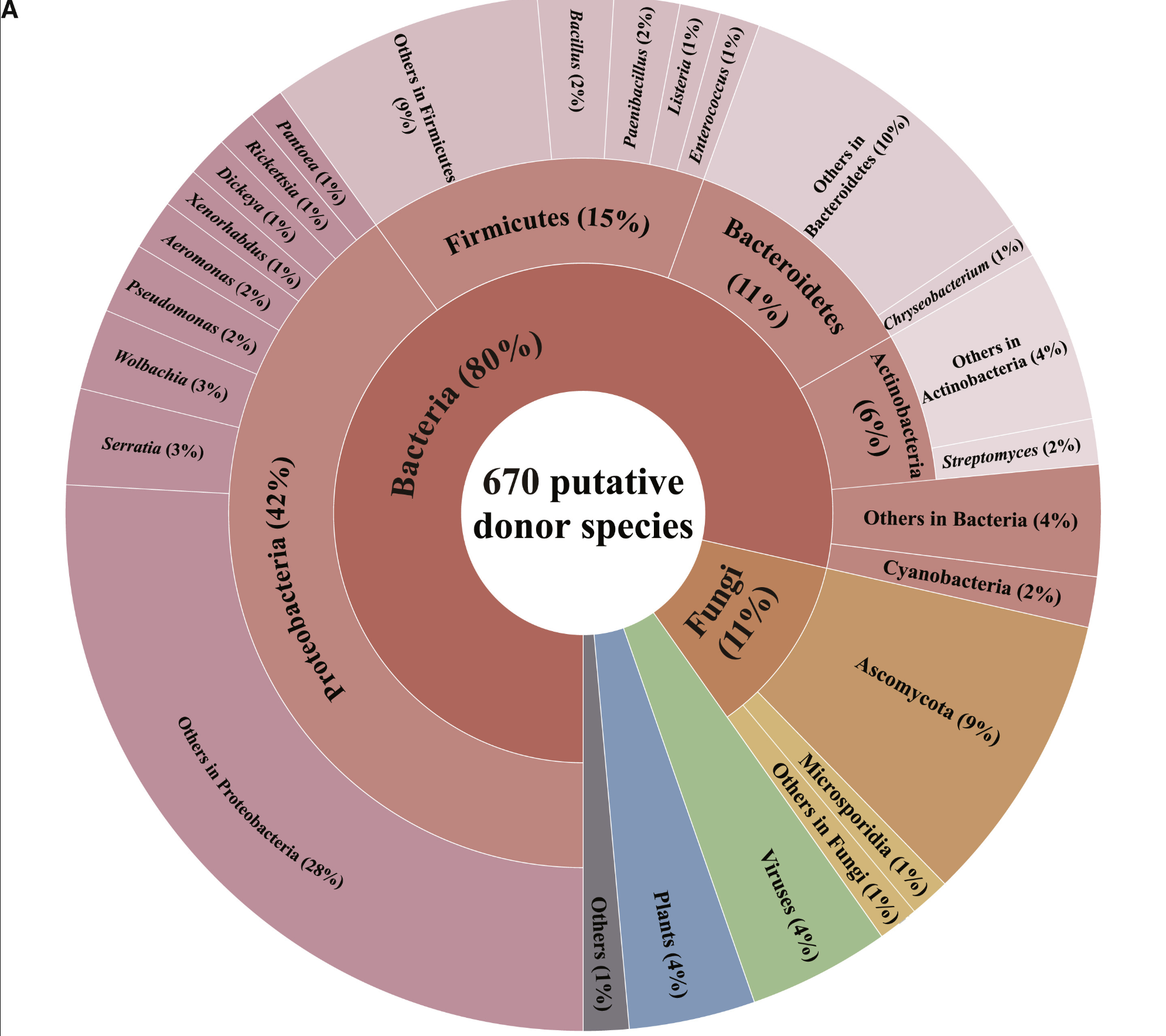 This also shows—take my word for it—that (mainly bacterial) groups that are symbiotic with an insect species (i.e., living within it or associated with it) were the most likely sources of horizontal gene transfer. That of course is also expected. You can’t get genes from an unrelated species unless the vector is nearby.

Finally, there’s one possible case of an adaptive HGT. That is the gene LOC105383139, horizontally transferred to the last common ancestor of Lepidoptera from the bacterial genus Listeria.  We don’t know what it does in the bacterium, but it does have one effect on a species of moth. Because LOC105383139 is in the genomes in all lepidopterans, Li et al. used the CRISPR-Cas9 gene editing technology to simply remove it—snip it precisely out of the genome—from one species of moth. the diamondback moth (Plutella xylostella), which can be reared fairly easily in the lab.

Li et al. found no significant effect of gene removal on any morphological or developmental character in the “snipped” moths, but the “knockout species” did have a much lower number of offspring from each mating compared to the normal moth having the gene. Upon further study, which I won’t describe, Li et al. found that the knockout males don’t court any females as ardently as normal males who carry the transferred gene. Normal moths also copulate more often than the edited ones. For some reason, since we don’t know what the gene does in either bacteria or moth, it is a mysterious “Casanova” gene”.

The upshot: In insects, at least, horizontal gene transfer is surprisingly common, with 88% of the 218 species examined having at least one gene in their DNA that came from another species. It’s widespread, too—at least one species in each of the 11 orders of insects examined (8 orders weren’t examined) having at least one HGT-acquired gene.

Of the species examined, butterflies are by far the most common carriers of transferred genes, with an average of 16 such genes per species, with the Hemiptera—true bugs—coming in second at 13.  In butterflies—at least in the one species examined—one of the HGT loci appears to have enhance mating and courtship, and that’s how it may have spread when it infected the genome of the common ancestor of all living moths or butterflies.

Finally, the big question: does this show that because evolutionary trees don’t exist, “Darwin was wrong”? Not on your life!

As I wrote in a previous post, there’s a difference between gene trees (the evolutionary history of a particular form of a gene) and species trees: the relatedness of groups of organisms that formed species as populations. Unless HGT is very, very common, the chance that it will mess up population trees—the trees of life that most concern evolutionists—is almost nil. Butterflies have thousands of genes, but each species has on average only 16 acquired from a different species. That is NOT going to mess up evolutionary trees. It’s a very small bit of noise in an overwhelming phylogenetic signal.

So, while Darwin was wrong about some things, we have no sign at all that he was wrong about the existence and importance of evolutionary trees that show how species are related. Nor was he wrong about variation that arose within species being the primary fuel for natural selection. HGT is fun and interesting, and a novel way of getting mutations and adaptations, but it hardly affects our general view of evolution.

28 thoughts on “Horizontal gene transfer in insects: widespread, but what does it mean?”