Here’s the rundown on this organization, which is in the Kennedy School of Government at Harvard University.  The IARA project, under which this “policy portal” falls, is described like this:

The Institutional Antiracism and Accountability (IARA) Project is an initiative of the Shorenstein Center on Media, Politics, and Public Policy at the Harvard Kennedy School directed by Khalil Gibran Muhammad, Professor of History, Race, and Public Policy at Harvard Kennedy School and the Suzanne Young Murray Professor at the Radcliffe Institute for Advanced Studies. The goal of this enterprise is to use research, clinical knowledge and policy interventions to promote antiracism as a core value and institutional norm. IARA proposes to further explore and examine how understanding and engaging with institutional history impacts organizations when forging a path forward for racial equity. While the field of racial equity and antiracism is not new, it remains underdeveloped within the context of applied knowledge and implementation for organizational behavior and institutional change.

and the Race, Research, and Policy Portal is explicitly designed to further equity:

RRAPP is a FREE online resource dedicated to summarizing and promoting research publications on diversity, racial equity and antiracist organizational change in private, public and non-profit firms and entities. Many of RRAPP’s resources highlight academic studies, which are often hidden behind subscription paywalls and are subsequently underutilized. RRAPP helps changemakers learn and find the tools they need.

Two of its three goals (besides creating a repository for material on antiracism) are these:

That’s all well and good, but if you click on any of the icons below, you’ll see the kind of stuff they want to disseminate. 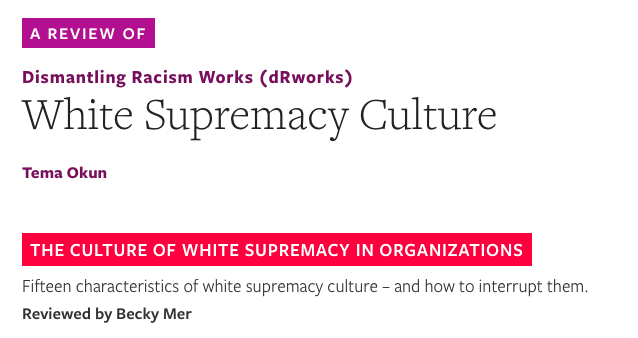 This list of aspects of “White Supremacy Culture” was compiled by Dr. Tema Okun, who you can think of as a lesser known Robin DiAngelo. Okun maintains an entire website, “White Supremacy Culture,” a culture she sees as institutionalized behavior of “white culture” that acts to oppress people of other races. Judging by her photo and bio here, Okun appears to be white; if that’s the case it’s another parallel to DiAngelo.

So how exactly does white supremacy culture show up in organizations, and how can it be interrupted? Dr. Okun outlines fifteen characteristics of white supremacy culture and strategies to counter them. As part of the Dismantling Racism Works (dRworks) workbook, she builds on the work of numerous researchers and practitioners, including but not limited to Andrea Ayvazian, Bree Carlson, Beverly Daniel Tatum, M.E. Dueker, Nancy Emond, Kenneth Jones, Jonn Lunsford, Sharon Martinas, Joan Olsson, David Rogers, James Williams, Sally Yee, and Dismantling Racism workshop participants. This guide also draws on the work of several organizations, including Grassroots Leadership, Equity Institute Inc., People’s Institute for Survival and Beyond, Challenging White Supremacy workshop, Lillie Allen Institute, and Western States Center.

My first reaction was that this list, by stereotyping “white culture” and distilling it into fifteen aspects that are all portrayed as negative, is simply racist. But I still tried to see any merit in the list: anything that is characteristic of most white people and also acts—and presumably became part of the culture—because it helps maintain whites in a superior position over people of color (these include Asians). The only one I saw as valid was “Paternalism.” The history of Anglophones and their relationship to blacks, at least, has been one of unremitting paternalism. In the JIm Crow South,, blacks often had to remove their hats in front of whites, defer to them by getting out of their way, and of course all over America adult black men were called “boy” for decades.

The ironic thing is that this very post is also paternalistic, with a white person lecturing not to blacks here, but to her fellow whites about how they are deficient and need to change their behavior. This is not a list meant for discussion but a list to be accepted and promulgated.

You will recognize that there are differences in behavior among cultures, but every one of these “white” characteristics can be seen as important in other some other cultures, too (“perfectionism” and “sense of urgency”, for example, can be seen in cultures of East Asia, like Japan). Other characteristics of “white supremacy culture”, like “power hoarding” or “believing that progress is bigger and more”, are also found in many other cultures, and I don’t recognize them them as especially characteristic of my culture.

Most important, not all of these characteristics are bad. Is “perfectionism really bad? How about “belief in objectivity”? “Sense of urgency”? (You’ve heard about the meeting of health officials in Oregon that was delayed because, says the organizer in an email, “urgency is a white supremacy value.”) The fact is that some of the characteristics in the list above are good, while others can be good depending on how they’re expressed (“worshiping the written word”). “Perfectionism” can be maladaptive by delaying progress or eroding one’s self image.

But the list is meant paternalistically because it implicitly refers to nonwhite groups whose own culture is apparently the opposite of the one described above. And insofar as there are bad aspects of “nonwhite cultures”, as there is of white culture (Ibram Kendi doesn’t think there’s a difference), it’s meant to soothe those who are, for example, chronically late, or those who don’t achieve and can blame that lack of achievement on “white supremacy culture.” It’s a way of deflecting blame for underachievement as well as to make all white people feel responsible for that underachievement.

But in the end, what we see here are mostly individual characteristics, not ones shared by all whites as a way to oppress people of color. It is both racist and divisive to make such lists (imagine making them for other ethnic groups!). What would be more useful is simply to discuss these as individual characteristics that can have good or bad effects depending on how they’re expressed. But then Okun would be out of a job.

This kind of list, promulgated by the “elite” college of Harvard, is the kind of stuff that not only divides humanity into groups in zero-sum competition, but is also ready-made to hand the next election directly to Republicans. They’re already making hay over the “urgency is a white supremacy value” remark; imagine what they will do with a list like this!

Finally, do these people know anything about how to change human behavior? Pro-tip: you don’t do it by telling your opponents that their culture sucks. I can imagine as well what Dr. King would think of a list like this. But of course Dr. King is passé now, for he wanted people judged as individuals, not by their ethnicity.