I didn’t realize until this week that ZeFrank, famed for his “True facts about biology” videos, also makes ads for Frisky’s cat food. But they are great ads, taking the form of an older tabby cat writing a letter to a newly adopted ginger kitten to give the younger one a sense of what it’s in for. Of course they end with encomia for Frisky’s cat food, but that’s only a small part of the video.

Actually, I’m not sure if these are television ads, as they’re too long (3-4 minutes). But they’re probably on the Internet.

This one’s about the Big Game, and is 3:40 long. They’re even funnier than the biology videos; in fact they are biology videos, describing the behavior of H. sapiens.

This article form Global News shows a Bengal cat named Tigger chasing an interloping black bear out of the family’s yard in North Vancouver. You can see the video (and read a bit) by clicking on the screenshots: 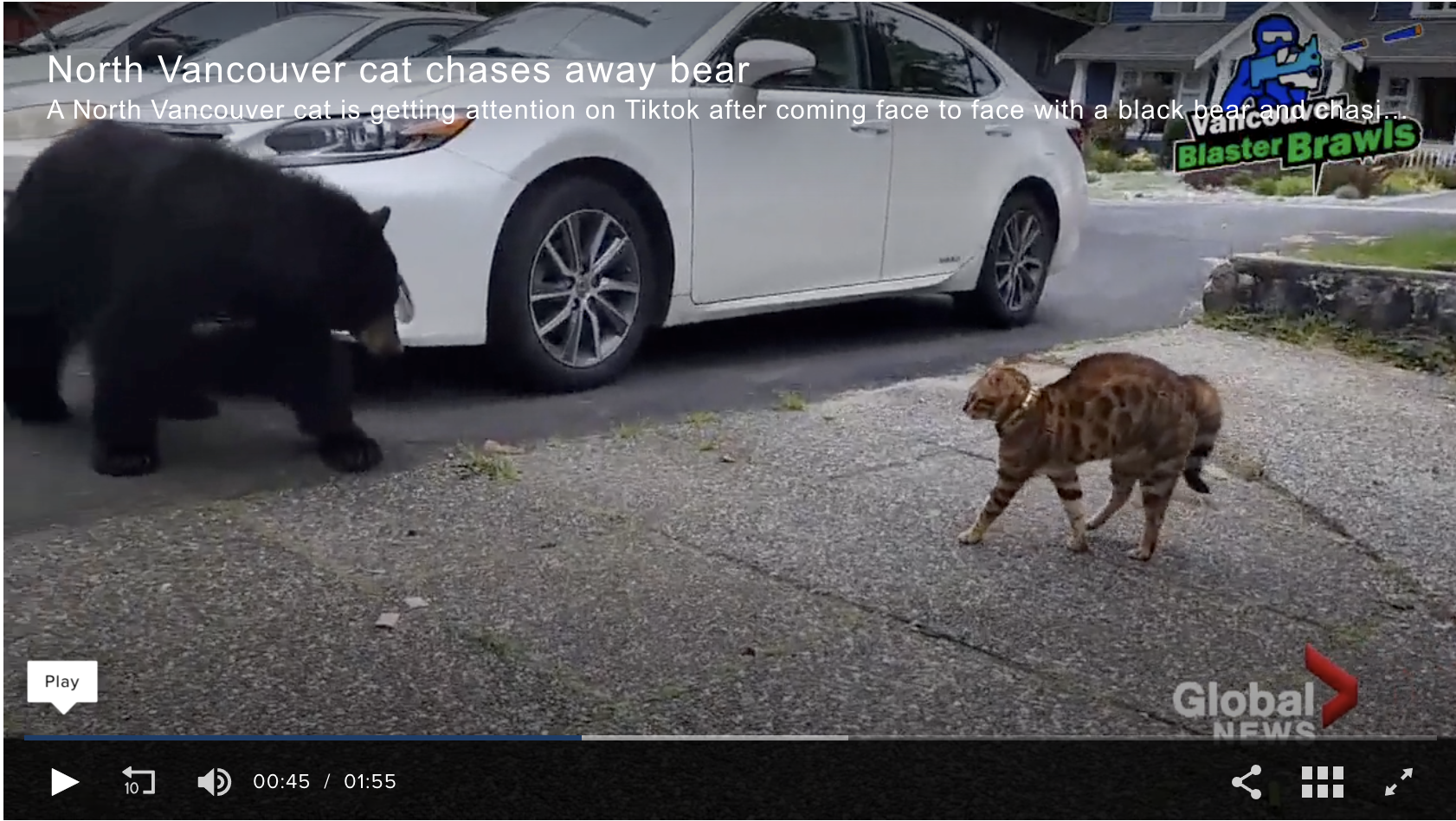 A North Vancouver house cat named Tigger is making TikTok headlines for winning a face-off with a black bear much larger than him.

Gavin and Cameron Sturrock are rarely fazed by their two-year-old Bengal cat’s behaviour.

Tigger is known for deterring dogs in their Canyon Heights neighbourhood, sparring with his feline brother Taz — even stealing chicken from the family’s kitchen.

But on June 21, Tigger shocked the Sturrock brothers.

Gavin said he was carrying two boxes of Nerf guns and guards out of the house in preparation for a Nerf war camping trip when he got caught in a battle on his driveway.

A large black bear he’d seen before had returned.

“I didn’t notice right away, but my little cat was just like – he was right here,” said Gavin.

And Tigger had no fear.

“He was two feet away from this bear,” Gavin told Global News Friday.

Gavin said he called Tigger and when the feline didn’t listen to him, he took out his phone and started recording.

”Tigger come back, Tigger…” Gavin is heard narrating on a video of the encounter he posted to TikTok.

Tigger is seen arching his back and walking towards the bear, who then backs up and runs off.

This is a moggie with moxie! And he’s also beaten FIP: a disease that’s deadly for cats. Read more about it at the screenshot links.

Finally, Jennifer Oullette decided to look up the earliest reference to how cats always land on their feet when they fall.

The oldest falling cat explanation comes from the book, The Feats of the Knowers of God, published around 1318. It is a collection of lectures given by the influential Persian poet and Sufi mystic known as Rumi (1207-1273) to his followers. https://t.co/0kF6cS9Nai

The reference links to a piece at skullsinthestars, which describes author Gregory Gbur’s search for the first “falling cat” discussion. Gbur is in fact author of an entire book about the subject; click below to see it on Amazon: 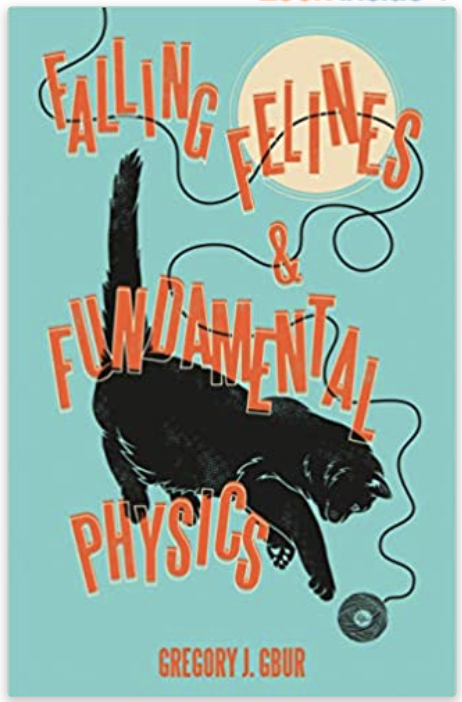 In the book, Gbur references an apocryphal tale from the prophet Muhammad, but later found out that the first real reference seems to come from the 13th century, and is another Muslim story (one good thing about Islam is that it encourages the love of cats rather than d*gs). To wit (from the skullsinthestars post):

A couple of years ago, however, a former student of mine read my book and did a little research, and confirmed that the story is, in fact, much, much older!*

It comes from the book with the (translated) title The Feats of the Knowers of God, written by Shams al-Dīn Aḥmad Aflākī and published around 1318. It is a collection of lectures given by the influential Persian poet, Muslim scholar and Sufi mystic known as Rumi (1207-1273) to his followers. In this collection, we find the origin of the story that Garnett referenced some 570 years later!

A printed copy of the translated book is roughly $400 these days; fortunately, due to the magic of the internet, I was able to find the relevant passage online.

One day Mostafa- God’s blessings and peace be upon him- was seated in the prayer-niche of the Mosque of Qoba and the noble Companions-God be pleased with them all-were present in his company. Suddenly a snake that had taken flight entered through the door and hid itself under the Messenger’s skirts. The snake said: ‘Oh Messenger of God, I am fleeing from an enemy. Since you are the refuge of both worlds, give me protection!’ Following in its tracks, a hedgehog came in and said: ‘Oh Messenger of God, turn over my prey to me. My young ones await me.’ The Messenger ordered that the hedgehog be given some innards and, having satisfied it, they sent it on its way. The Messenger said: ‘Oh snake, come out now and be off! Your enemy has departed and is gone.’ The snake replied: ‘But let me display my skill before I leave.’ And it wrapped itself around the Messenger’s waist like a belt and intended to bite him mercilessly. The Messenger presented his blessed pinkie to the snake for it to bite and when the snake brought forth its head to inflict the bite, Abu Horeyra- God be pleased with him-who bore in his breast: ‘The cloak of every community is a sage and the sage of my community is Abu Horeyra’, and who had set the crown of kindness on top of his head, undid the opening of a blessed sack and a black cat jumped out. The cat tore the snake to pieces with its claws and then walked gracefully to the Messenger. That very moment the Messenger said: ‘Love of the cat belongs to the faith. Love, even if it be a cat!’ And with his blessed hand he stroked the cat’s back. The result of the blessings of that caress is that as often as a cat is thrown from high roofs, it necessarily lands on its feet and its back doesn’t touch the ground.

This version is much more interesting than the one passed on hundreds of years later!

“Abu Hurairah” literally translates to “Father of the Kitten,” and was the nickname of Abdur-Rahman ibn Sakhr Al-Dawsi Al-Zahrani, one of the companions of the Prophet Muhammad. He was a lover of cats,

And that, my Best Beloved, is why cats land on their feet.