I was getting ready to go down to feed Audrey and her brood when a member of Team Duck called me and said “There are babies in the channel.” I thought she meant that our babies—that is, Audrey’s brood—were in the channel, where we often feed them.

But no, the team member meant that there was a new brood of baby ducks (four of them) with their mom in the channel. I threw on shorts and a teeshirt and, with a paper-towel-lined box and two nets, ran downstairs. Several Team Duck members were there, and, sure enough, a mother with four tiny newborns.

We decided to wait to see if the new brood could possibly get along with Audrey and her babies, but it wasn’t long before her Gang of Thugs swam into the channel, and Audrey immediately attacked one new duckling, pecking at it hard. I knew right then and there that I had to rescue the babies, for Audrey and her Thugs would kill them all. Better to rescue them and let them live than risk them all being killed, which was certainly going to happen. I jumped into the water and separated Audrey from her prey.

It was a tough rescue. Though small, these four babies were really good at diving underwater when approached and popping up 15 or 20 feet away in a completely random direction. (This is, of course, is a hardwired adaptive escape behavior, as the predator doesn’t know where they’ll surface.) We got two babies with nets and two became so exhausted from diving and being chased that I could approach them and gently pluck them from the water.

The thing I’ve learned about ducklings is that they are terrifically resilient.. The two I got by hand looked like they were at death’s door, but after we gently dried them with paper towels and put them all together, within 20 minutes they were lively and jumping about in their towel-lined box. I inspected each one, and all were in good shape. But they were clearly newborns.

So as I write I have the same mixture of happiness and despair that accompanies these rescues: it’s like coming down from the duck high you get when you know you’ve rescued them all.

Although our normal rehabber is on vacation for two weeks, we located one of her colleagues who lives near downtown and was driving birds out to Willowbrook in an hour and a half after our rescue. Two members of Team Duck immediately drove the four boxed babies to the rehabber, while I went home for a thorough shower and scrubbing. (This time I did put sanitizer on my legs soon after the rescue.)  Damage: my legs are banged up and have several bandages and Neosporin antibiotic on my cuts.  The upside is much better: we saved four lives.

Here they are (photo by Jean Greenberg, who netted her first duckling).  The one on the right is still a bit wet, but we dried it off. 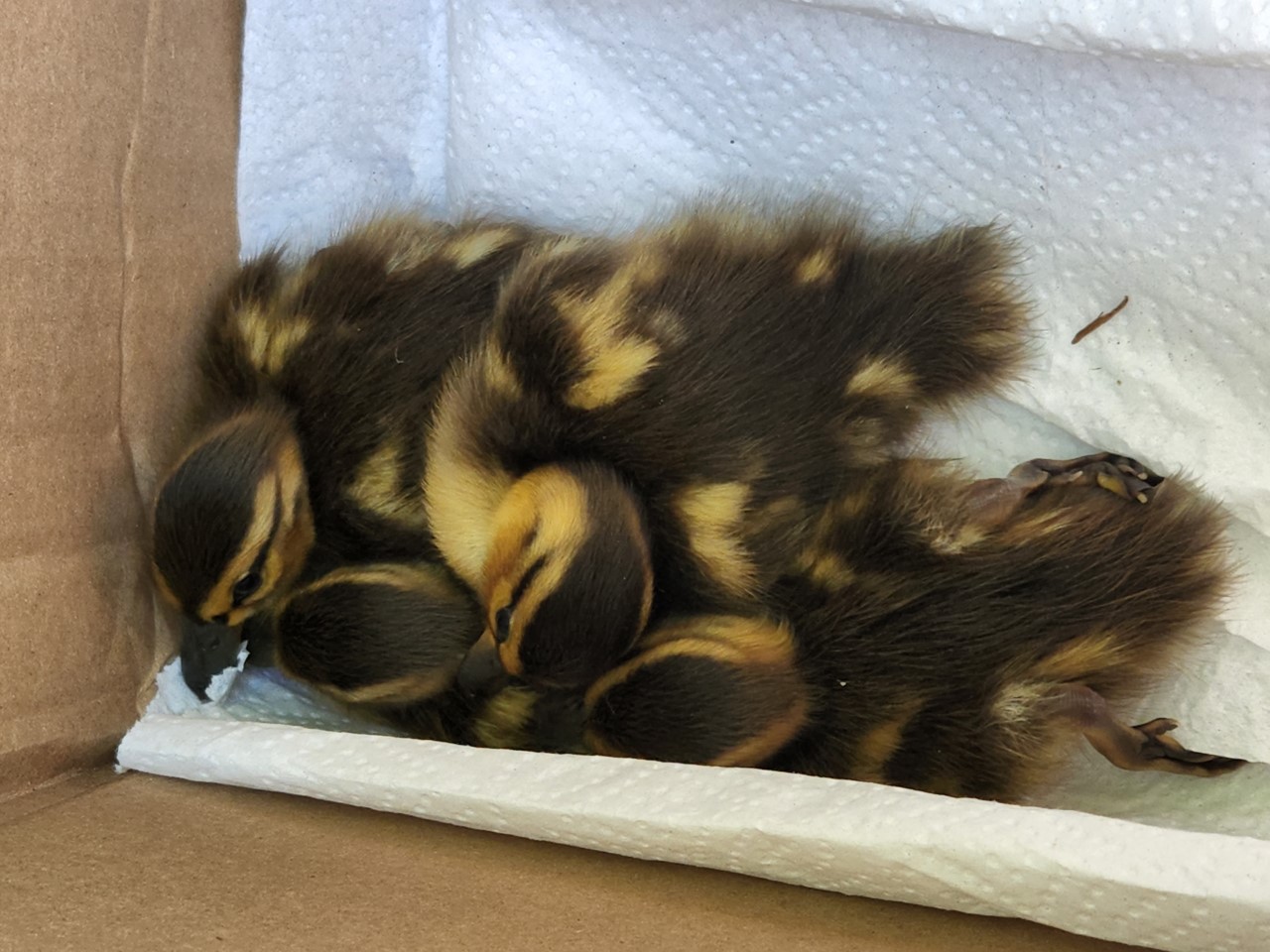 20 thoughts on “Another day, another rescue”