The common defense of gun ownership by private individuals is that “what stops armed bad guys is armed good guys”. (This is a quote from Ted Cruz). Such is the defense for much private gun ownership, and also now for the ridiculous movement to arm teachers to deter or kill school shooters. Of course if you include police and security guards as “armed good guys,” the mantra has more credibility, but the mantra is often used to justify gun ownership by private citizens.

A new article in the New York Times (click on headline below) tests whether the Cruz Mantra is a verity, at least as far as “active shootings” are concerned.

It turns out that the answer is that the “conventional wisdom” is wrong for active shooters. It’s also wrong for home invasions in general, as private gun ownership involves accidental deaths, or suicides, far more often than it stops (by shooting) individual altercations between innocent citizens and “bad guys”. But today we’re talking about “active shooters”.

What is an active shooter? The paper, drawing from data collected by the Advanced Law Enforcement Rapid Response Training Center at Texas State, collaborating with the FBI, defines active shooter attacks this way:

[Active shooter attacks are those] in which one or more shooters killed or attempted to kill multiple unrelated people in a populated place.

And they’re increasing—currently up to more than one a week. Here’s a figure from the NYT (all figures from the article) showing the number of active shooter attacks per year from 2011 to 2021. (According to the Washington Post, we’ve had 250 already in 2022; although their figures are for “mass shootings”, these seem the same as “active shootings”). 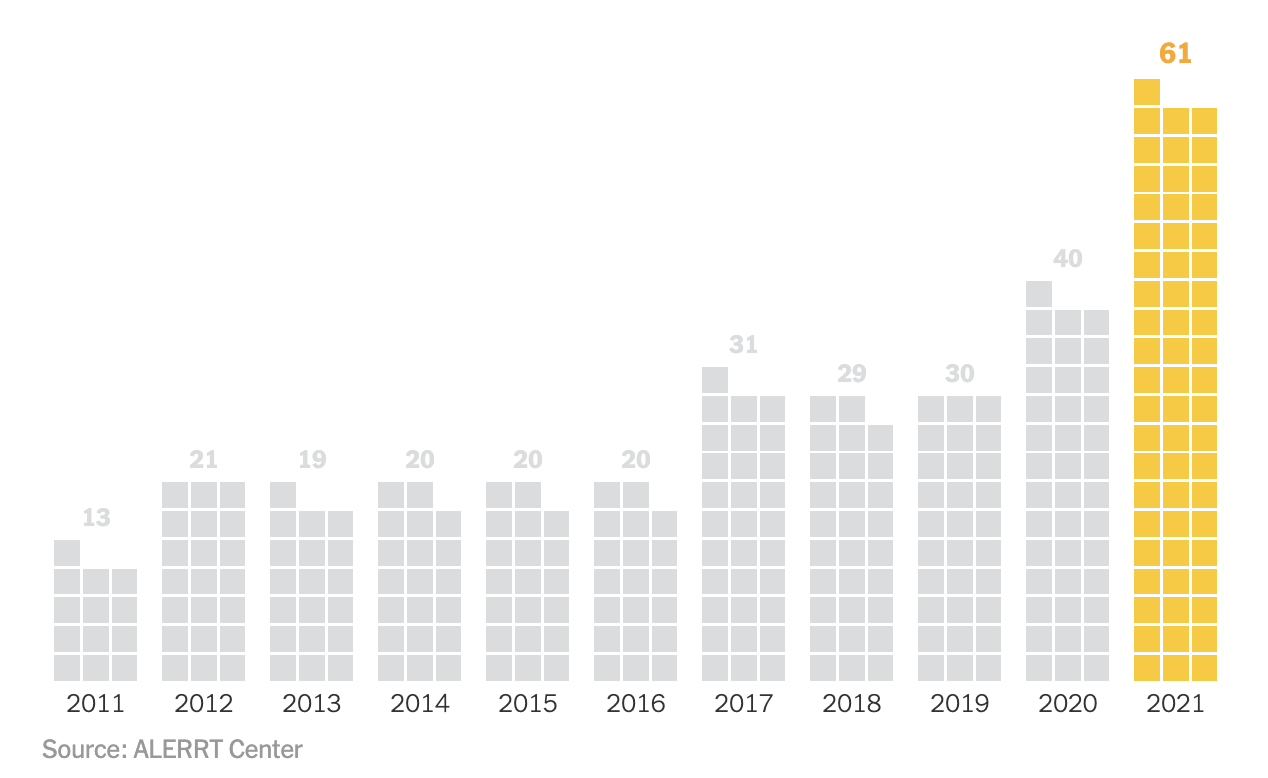 According to the data, there have been 433 active shooter attacks in the US from 2000-2021. What the figure below shows is how they ended, divided into two main groups: attacks that ended before police arrived (249) and those that ended after police arrived (184).Each of the two main divisions is further subdivided. 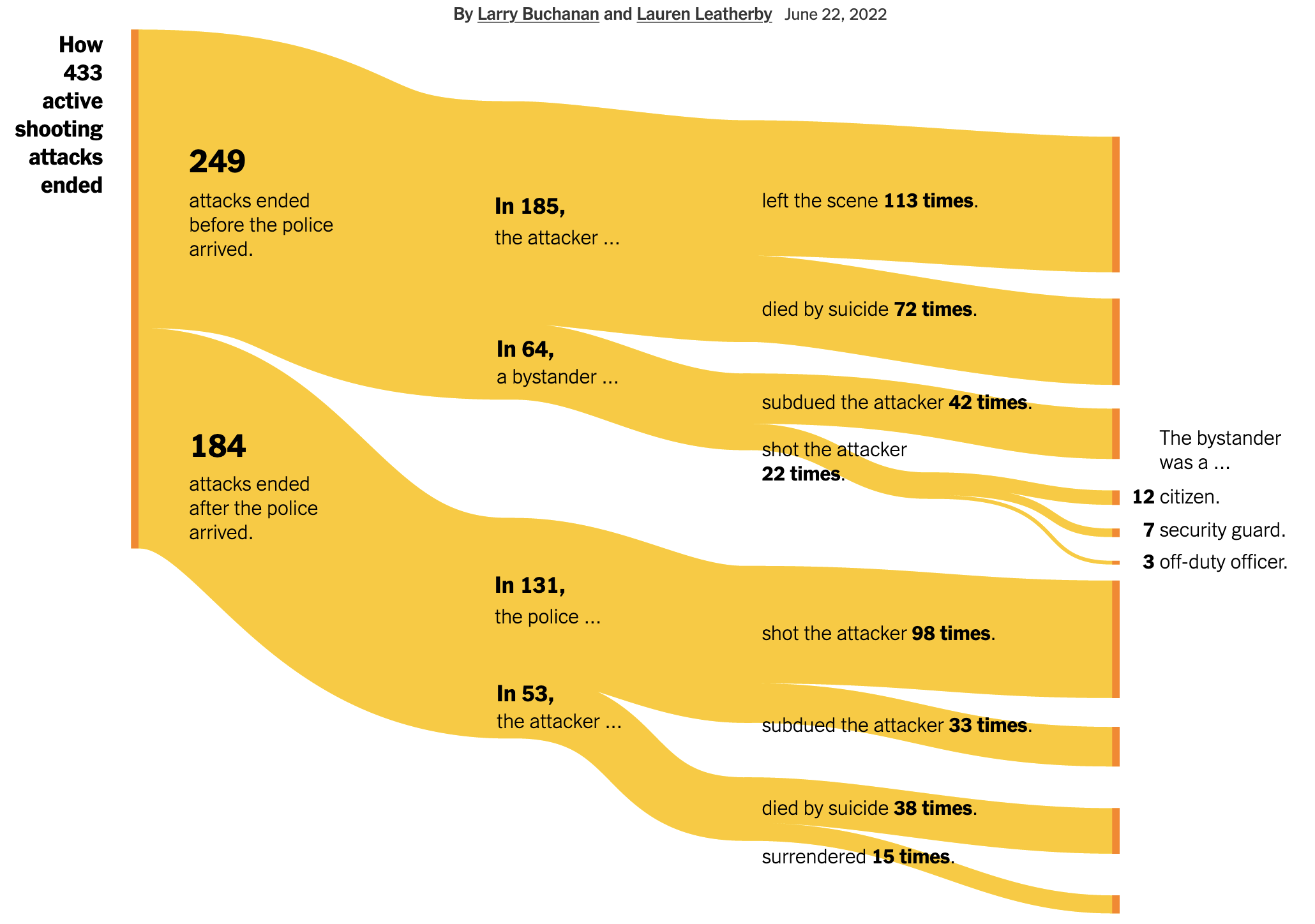 Here are the lessons (bold headings and indented stuff are taken from the paper):

a.) Police officers shoot or physically subdue the shooter in less than a third of attacks. ”

Most events end before the police arrive, but police officers are usually the ones to end an attack if they get to the scene while it is ongoing.

Hunter Martaindale, director of research at the ALERRT Center, said the group has used the data to train law enforcement that “When you show up and this is going on, you are going to be the one to solve this problem.”

The average response time for police to get to the scene is very fast: three minutes. But this doesn’t mean that the cops themselves nearly always end the attack. Very often the shootings end when the attacker simply leaves the scene (not because he’s being shot at, kills himself, surrenders, or is subdued without guns.  These add up to 65% of total active shootings.

b.) The rate of suicide is extraordinarily high in these events. 110 of the 433 events ended with the attacker killing himself (there are a few women who carry out these attacks, but nearly all are by men). This is most likely either via “suicide by cop” or the result of a realization by the attacker that he’s going to be either caught or shot.

d.) When attacks are ended by the shooting of the attacker, the vast majority of time it’s by a police officer, on or off duty, or a security guard.  The number of attacks shopped by shooting the perp were 120. Of these, 12, or 10%, were stopped by citizen shooters. But 12 is only 2.7% of all active shootings that were ended.

Conclusion (from me): When mass shootings are stopped, only a very small percentage are stopped via shooting by armed citizens who are not cops or security guards. And attacks stopped by private citizens were most likely to be stopped by subduing him than by shooting him (42/54, or 78%; this drops to 66% if you include “bystander” cops or security guards.

But taking all the ways that active shootings could end, including the shooter leaving the scene (most are captured later), suicide, or subduing the shooter, only 2.8% of them are stopped by private citizens shooting perps (12/433). Ergo, Ted Cruz is wrong: in these mass shootings, at least, it’s not the “armed good guys” (implying private citizens) but other forces, tactics, and people (including cops) who stop the shootings.

I have no objection to cops or security guards carrying guns; I do have objections to private citizens carrying or owning guns. In most cases these lead to the death of innocent people more often than to the extirpation of “bad guys.”

I’ll end with a couple of quotes from the article:

“It’s direct, indisputable, empirical evidence that this kind of common claim that ‘the only thing that stops a bad guy with the gun is a good guy with the gun’ is wrong,” said Adam Lankford, a professor at the University of Alabama, who has studied mass shootings for more than a decade. “It’s demonstrably false, because often they are stopping themselves.”

. . . But armed bystanders shooting attackers was not common in the data — 22 cases out of 433. In 10 of those, the “good guy” was a security guard or an off-duty police officer.

“The actual data show that some of these kind of heroic, Hollywood moments of armed citizens taking out active shooters are just extraordinarily rare,” Mr. Lankford said.

In fact, having more than one armed person at the scene who is not a member of law enforcement can create confusion and carry dire risks. An armed bystander who shot and killed an attacker in 2021 in Arvada, Colo., was himself shot and killed by the police, who mistook him for the gunman.

Now remember that this post (and the article) is about “active shooters,” which seem roughly equivalent to “mass shooters”. We’re not talking about home invasions or private confrontations between people. And at least in this case, almost no benefit is derived from arming citizens. When you compare that to the down side of arming citizens, the Ted Cruz defense falls to pieces.

79 thoughts on “How useful are guns in civilian hands for defending against “active shooters”? Not very much.”