Throughout the month of June, the planets have been falling into a rough line as viewed from Earth.  Tonight, five of them will be visible with the naked eye before sunrise times—aligned according to their distance from the Sun. This won’t happen again until 2040.  And if you have a good view and no city lights around, tonight will be an excellent time to see Mercury, Venus, Mars, Jupiter, and Saturn (Neptune and Uranus will be too faint to see unless you have a telescope).

In principle, you could see the array below tomorrow morning, but only five of planets with the naked eye. But you get a crescent Moon thrown in, and right in the proper place: between Venus and Mars.

You should start your observations before dawn, bringing binoculars if you have them: 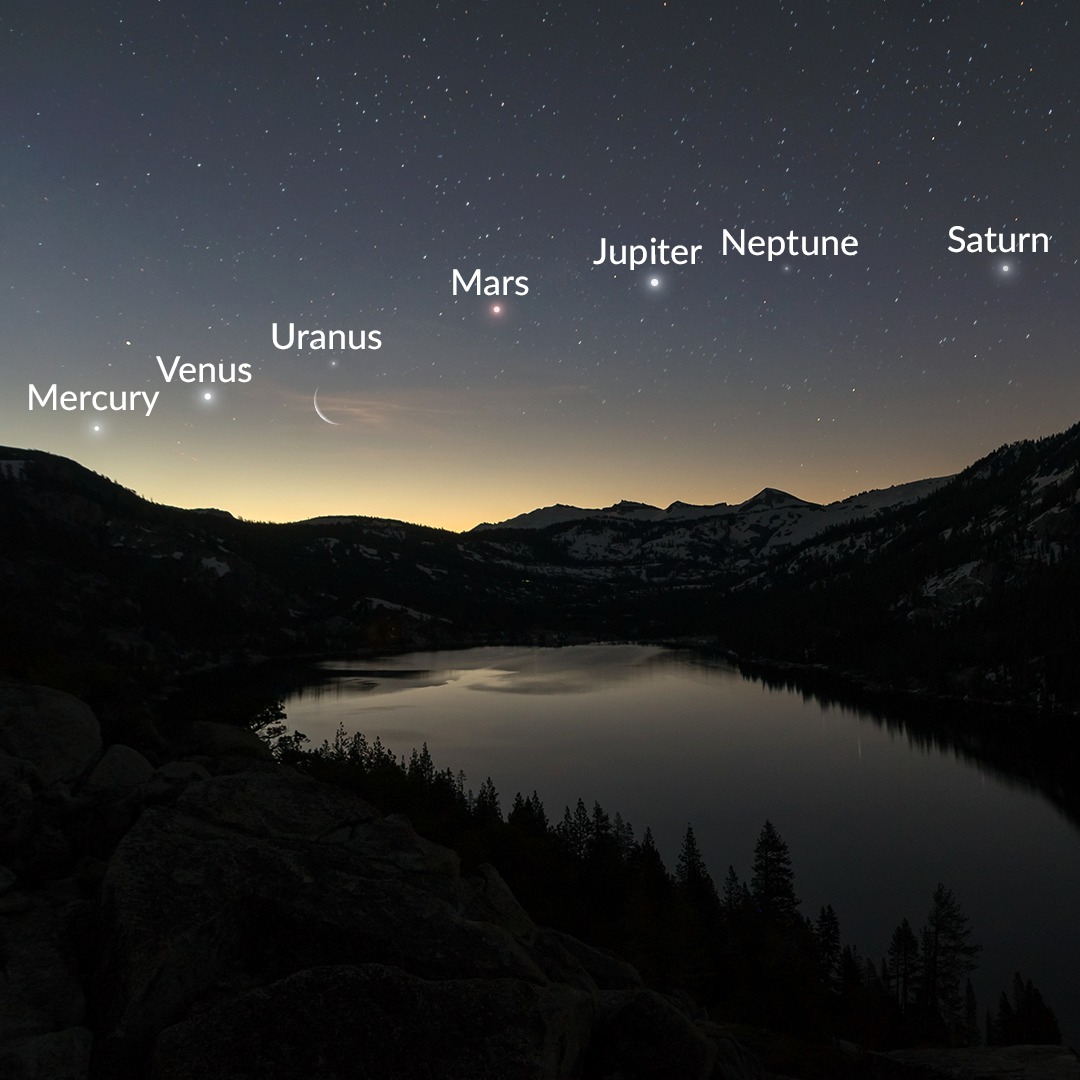 The most spectacular planet parade of the year will take place on the morning of June 24. Observers will see five planets of the Solar System aligned in the sky: Mercury, Venus, Mars, Jupiter, and Saturn.

In fact, this will be a seven-planet alignment as Neptune and Uranus will also join the celestial show. However, these two giant planets are too dim to be spotted with the naked eye.

You should start your observations about an hour before dawn. The planets will extend from east to south (from north to east in the southern latitudes) across the sky. Observers from the Southern Hemisphere will have a better view — the planets there will rise earlier and climb much higher.

An additional bonus is the waning crescent Moon, shining between Venus and Mars. It will be slightly out of the “planetary line,” traveling from planet to planet during the latter half of June.

To easily locate and identify planets on the sky’s dome, you can use mobile apps like Star Walk 2 or Sky Tonight. Simply point your device at the sky, and the apps will show you what object you’re looking at.

Sky & Telescope has some fancy diagrams and more information. All of June is good to see this, but two periods, June 3-4 and tonight, are notable. (I’ll neglect the days that are gone):

June 24: According to Sky & Telescope magazine, the planetary lineup this morning is even more compelling. To begin with, Mercury will be much easier to snag, making the five-planet parade that much more accessible. And you’ll have about an hour to enjoy the sight, from when Mercury pops above the horizon to when the rising Sun washes it out of the sky. But the real bonus is the waning crescent Moon positioned between Venus and Mars, serving as a proxy Earth. By this time of month, the planets are spread farther across the sky — the distance between Mercury and Saturn will be 107°.

Here’s a diagram of what you can see 45 minutes before sunrise tomorrow. It’s from the Sky & Telescope post, and the caption is indented:

At dawn on June 24th, the crescent Moon joins the planetary lineup. It’s conveniently placed between Venus and Mars, serving as a proxy Earth.

I wish I could see this splendid array, but there are too many lights around where I live. I hope I’ll get a photo to post tomorrow. 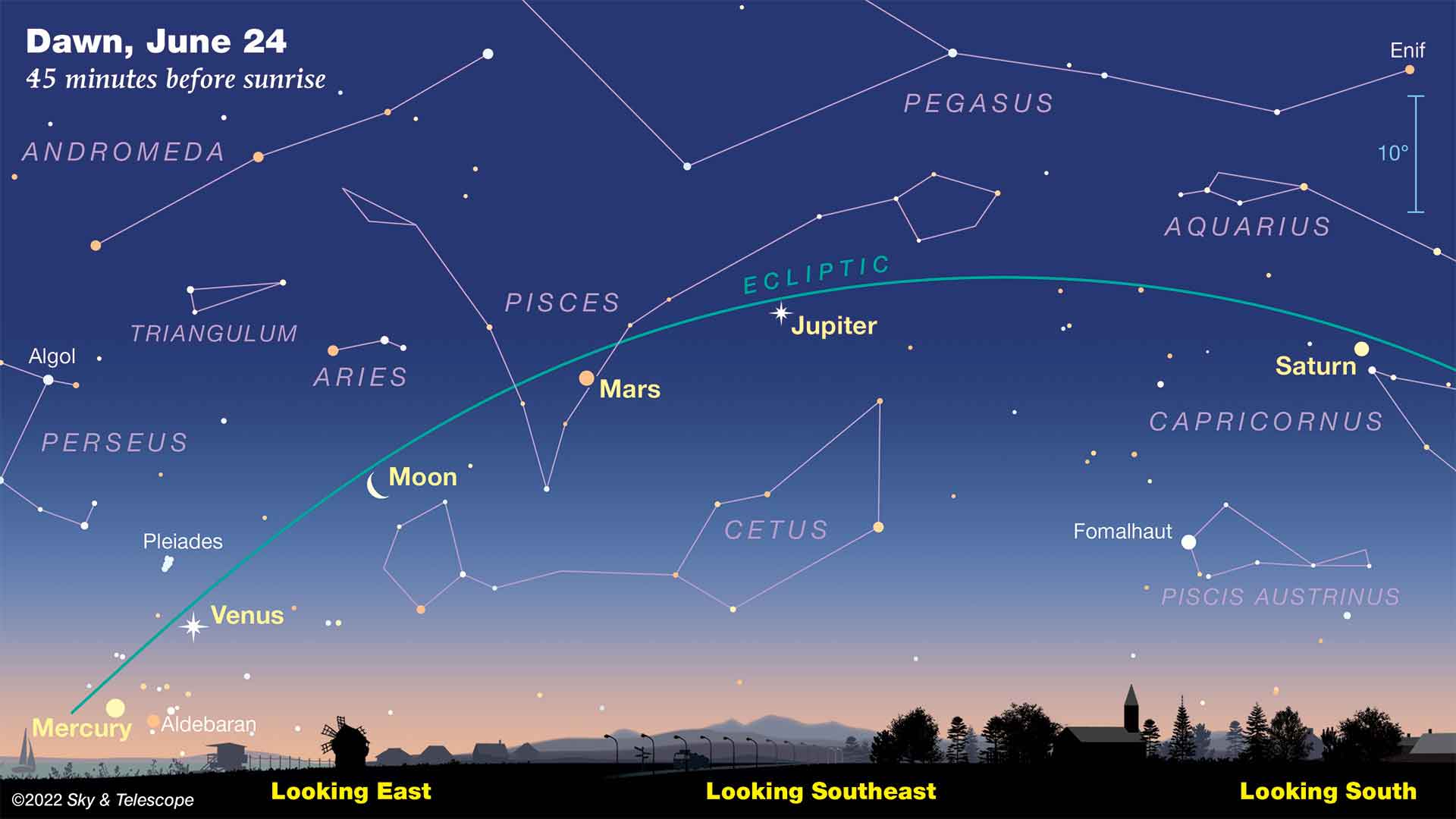 12 thoughts on “Planet parade tonight: you can see five with the naked eye (plus the Moon) if conditions are right”