The weekly New York Times lucubrations of Anglican priest Tish Harrison Warren are anodyne and sometimes off-putting, yet I cannot resist reading them—for the same reason that you smell the milk when you know it’s gone bad.  This week, Warren interviews Rachael Denhollander, the first gymnast to publicly accuse team doctor Larry Nassar of sexual abuse. Denhollander is also going after the Southern Baptist Church because, it turns out, they’re as bad as Catholics regarding the sexual abuse by preachers.

Denhollander has done and is doing good stuff; my objection is that she seems to recognize sexual predation and its immorality only because Jesus says it’s bad (though I’m not sure he even deals with that issue in the Bible). Harrison and Denhollander seem to agree, in the end, that we must draw our morality from God because there’s something wrong with secular-based morality. 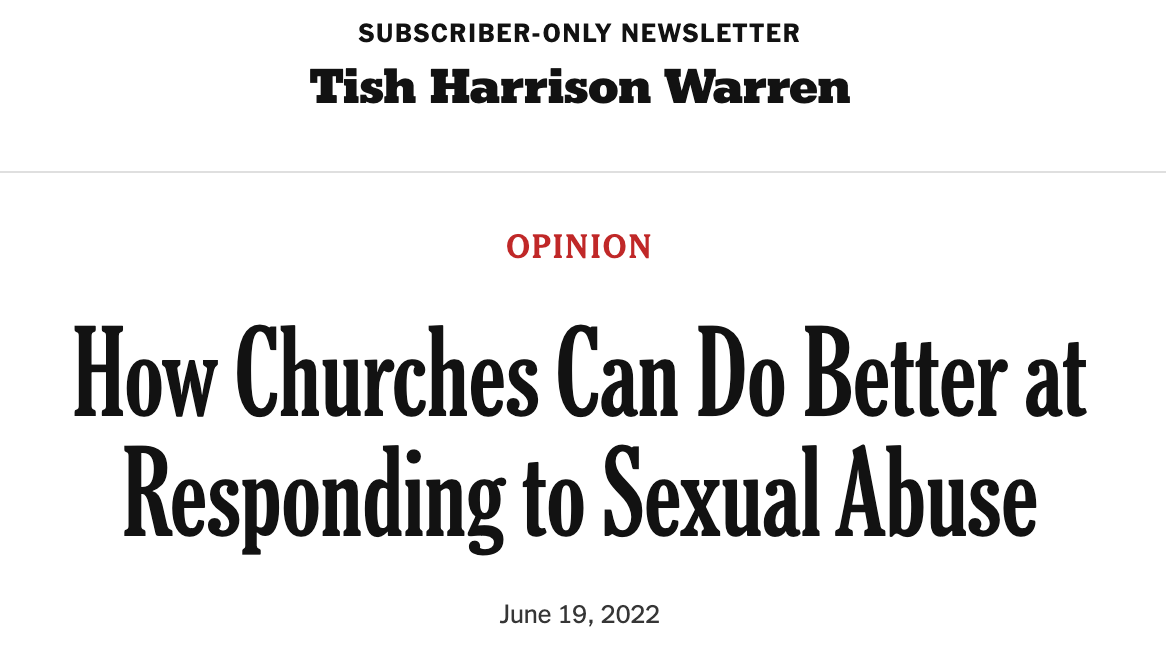 First, a small nit to pick. Warren’s questions are in bold; Denhollander’s responses in plain type:

Some brass tacks related to churches generally: If there is an abuse allegation in a church, what is the right response?

I think there are really two important parts to that question.

One beef: in the U.S. we’re presumed innocent until we’ve been convicted by a judge or jury. (That’s why Denhollander says “alleged perpetrator”.) But she then goes on to mention the “survivors”, who really can’t be counted as “survivors” of a crime that hasn’t yet been established.  Using the very word “survivors” assumes that the people who are bringing charges in fact were victims of a crime. Sometimes that obvious, but sometimes it’s not, as the existence of a crime can rest solely on allegations.

But we needn’t dwell on that, for the main point comes at the end—about sources of morality.

You have been working alongside survivors in church settings for many years now. Why do you stay in the church with all the evil that you see there?

How do I know that the authority I’m seeing isn’t a good use of authority? How do I know that sexual abuse really is wicked and it ought to be treated that way? You can’t know a line is crooked unless you have some idea of a straight line. That is a paraphrase of a quote by C.S. Lewis, and it has really been a linchpin for me.

The reason I remain a Christian is because my faith is what allows me to say that what I’m watching right now is broken. These institutions and these responses to survivors aren’t right. And I know they’re not right because I have a perfect picture of what these things are supposed to be.

There are several things to “unpack” here, one being Denhollander’s claim that she’s a Christian because “her faith allows her to say what she’s watching is broken.” First of all, that’s just not true. Sexual abuse by clerics looks broken because it’s immoral by any standards: the use of one’s authority as a basis for sexual assault.  Do you need Christianity to see that? After all, the whole world (except for the Church itself) was horrified when the scandals of Catholic sexual abuse became public. You don’t have to be a Christian to see what’s “broken”!

Second, if Hollander had been a Christian several centuries ago, her faith would have told her that it’s the right thing to do to torture and burn heretics, engage in all kinds of acts that we’d find immoral today (using the Bible to condone slavery, for example), and perhaps ban books.

What has changed? Not Jesus or his words, but the secular world, whose morality evolves as Christian morality scurries behind to keep up. This alone show the verity of Socrates’s Euthyphro Argument: we don’t think something is right or wrong simply because God (or Jesus) tells us that it’s right or wrong, but because you’re using a social or secular morality to which one’s idea of God conforms.

An example of this is God telling Abraham to kill Isaac. Abraham, who apparently conformed to “divine command theory,” was about to do in his son, just because God said so. Most rational people find this horrible; they’d say “God wouldn’t order that” because he’s a good God. But God did order that, and our revulsion comes from the conflict between secular and “God-based” morality.

Religious “morality” changes from year to year not because we understand God’s or Jesus’s will better—the Bible is still the same—but because that we interpret theology in each era in a way that comports with our present morality.

Yes, Denhollander says that her allegiance is not to the law, or to a secular code of morality, but to Jesus, for the words of Jesus will show you what’s right and what’s wrong. This is the same Jesus who tacitly approved of slavery and told his followers to neglect their home and family and follow him. Of course nobody thinks that’s right any more.

The last sentence is assertive, but its thesis is dumb:

Because every other belief system outside of God leaves us essentially dependent on societal and cultural response to define right and wrong.

And what, exactly, is wrong with that? Should morality be absolutely constant as mores and facts change? With Jesus you get the former, with secular morality the latter? I know which one I prefer.