I don’t know squat about Palladium Magazine, but here’s what it says about itself:

Palladium Magazine is a non-partisan publication that explores the future of governance and society, through responsible slow publishing, long-form analysis, political theory, and investigative journalism.

A reader sent me the article below by Ginevra Davis, a Stanford student, and I don’t know what to make of it. This is one of two articles I’ll write about briefly today, as I’d like to hear readers’ take on them. In this first one, Davis describes how Stanford University, which 30 years ago used to be an excellent school (it still is), but one that fostered an eccentric student body. According to Ginevra Davis, the school has now become a quiet and boring place, with many students feeling socially unconnected since fraternities and other venues for social life have slowly been dismantled by the administration. 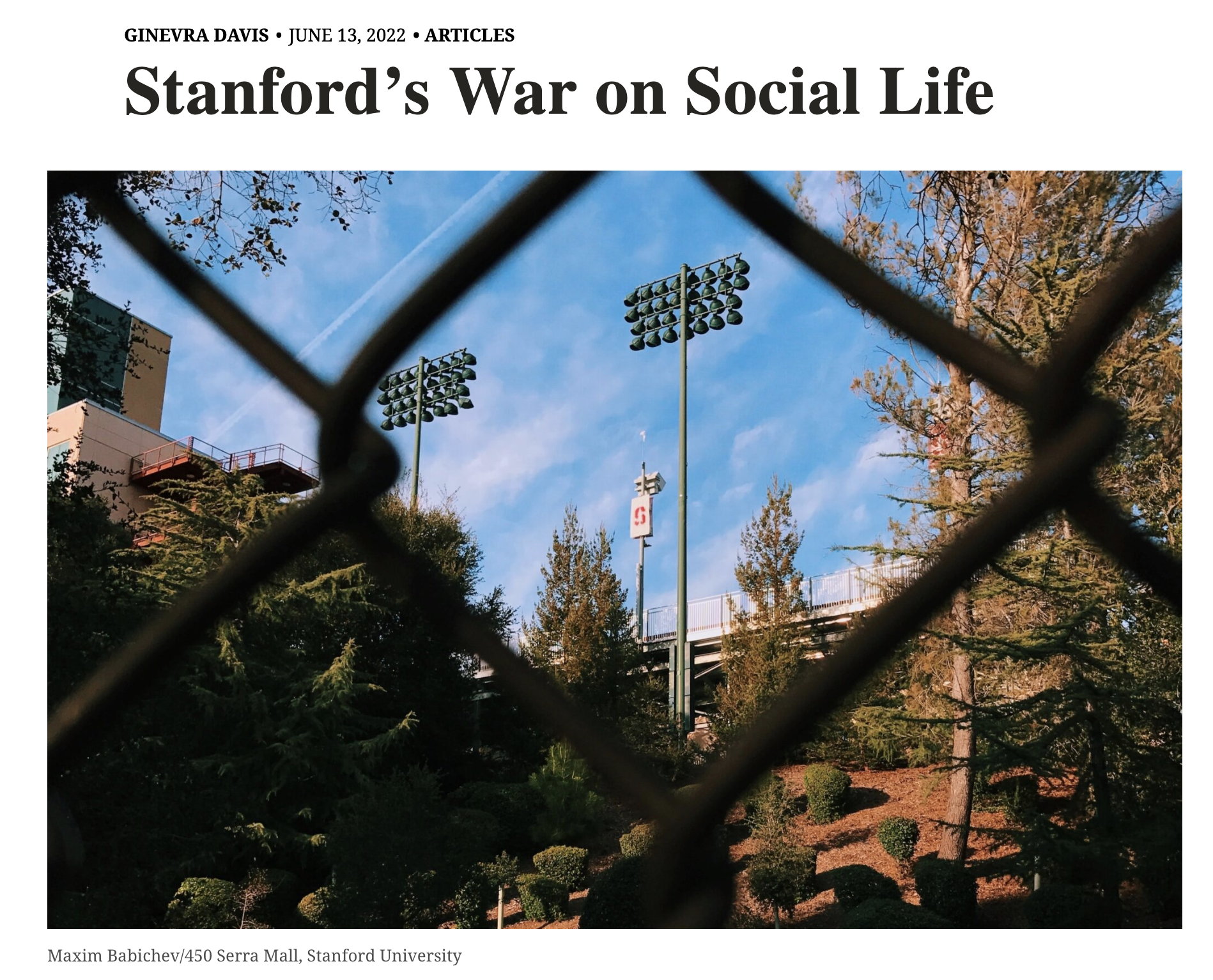 The destruction of the social life of Stanford, insofar as it’s really happened, appears to Davis to have something to do with increasing equity, but the connection between the two factors is unclear.  A few quotes from the article:

Since 2013, Stanford’s administration has executed a top-to-bottom destruction of student social life. Driven by a fear of uncontrollable student spontaneity and a desire to enforce equity on campus, a growing administrative bureaucracy has destroyed almost all of Stanford’s distinctive student culture.

What happened at Stanford is a cultural revolution on the scale of a two-mile college campus. In less than a decade, Stanford’s administration eviscerated a hundred years of undergraduate culture and social groups. They ended decades-old traditions. They drove student groups out of their houses. They scraped names off buildings. They went after long-established hubs of student life, like fraternities and cultural theme houses. In place of it all, Stanford erected a homogenous housing system that sorts new students into perfectly equitable groups named with letters and numbers. All social distinction is gone.

Whenever Stanford empties out a fraternity or theme house, the administration renames the organization’s former house after its street number. Now, Stanford’s iconic campus Row, once home to dozens of vibrant student organizations, is lined with generic, unmarked houses with names like “550,” “680,” and “675” in arbitrary groupings with names like “S” and “D”.

According to Davis, Stanford not only produced a gaggle of Google-like people, but was a fun place to be:

Stanford’s support for the unconventional pioneered a new breed of elite student: the charismatic builder who excelled at “breaking things” in nearby Silicon Valley. Stanford students were aspirational and well-rounded, confident enough to perform in a bucket hat and floaties and make out with strangers during Full Moon on the Quad. For a time, Stanford experienced a brief golden age when a spontaneous, socially permissive culture combined with a class of 5%-acceptance rate baby geniuses.

Stanford’s already formidable reputation grew, in large part, because of the way these lessons translated into the work and lives of its graduates. Between 1998 and 2013, Stanford students founded Google, Pinterest, Instagram, and Snapchat. New grads were turning down $350,000 starting salaries to try their hand at changing the world, or at least beating their classmates at making their first million. Soon, breathless articles described the mythical school where money grew on trees, where America’s academic wonderkids went to make their fortune under the California sun.

Starting in 2013, Stanford was consistently ranked first by students and parents as “America’s Dream School.” Stanford was elite, but unlike most elite schools, what made Stanford the object of such national obsession was that it was also fun. Stanford had created a global talent hub combined with explicit permission for rule-breaking. As a result, students learned a valuable lesson: they had agency; they could create their own norms and culture instead of relying on higher authorities.

It was about then that Stanford begin to get rid of social organizations—not just fraternities but any kind of social “house” with a theme (like the “Anarchists House”), as well as and virtually dismantling one of America’s weirdest college bands: the Leland Stanford Junior University Marching Band, known for its on-field antics and eccentric players. Here’s performance after the Rose Bowl in 2013:

. . . Unlike Harvard, which abruptly tried to ban “single-gender social organizations” and was immediately sued by alumni, Stanford picked off the Greek life organizations one by one to avoid student or alumni pushback. The playbook was always the same. Some incident would spark an investigation, and the administration would insist that the offending organization had lost its right to remain on campus. The group would be promptly removed.

Over time, it became clear that their decisions only ever went one way—fewer gatherings, fewer social groups. The campus spirit waned year by year.

. . . With every additional unhousing, it became increasingly apparent that Stanford’s revealed preference was to rid the campus of all distinct social groups. Two years after founding CORL, Stanford hired the same Harvard administrator who led the campaign to rid the campus of Greek life and Final Clubs. Harvard had overplayed their hand by trying to purge all major social organizations at once. But at Stanford, they found more success picking them off one by one.

The first thing Stanford announced was the introduction of a new housing system, designed to promote “fairness” and “community” on campus. Under the system, new freshmen would be assigned to one of eight artificially-created housing groups called “neighborhoods,” each containing a representative sample of campus housing. To avoid the potential controversy of actually naming them, the administration punted the decision and called the neighborhoods S, T, A, N, F, O, R, and D.

An administrator named Mona Hicks was tasked with explaining the vacuous names to the Stanford Daily. Her response was bizarre. “There are eight letters in the word Stanford, and therefore each neighborhood has a letter from Stanford,” she said. And so, “while we are uniquely different, we’re all tied together, especially now in this time.”

. . .When Stanford could not remove a student organization for bad behavior, they found other justifications. One such case was the end of Outdoor House, an innocuous haven on the far side of campus for students who liked hiking. The official explanation from Stanford for eliminating the house was that the Outdoor theme “fell short of diversity, equity and inclusion expectations.” The building formerly known as Outdoor House was added to Neighborhood T.

Next year, Outdoor House will be reinstated, but only because house members promised to refocus their theme on “racial and environmental justice in the outdoors.” Upholding diversity, equity, and inclusion is the first of four “ResX principles” that now govern undergraduate housing. Stanford reserves the right to unhouse any organization that does not, in their opinion, uphold these principles.

One of the houses on the lower half of the Row is Columbae, a vegetarian co-op where students cook and eat together. I am sure that their house, a stately brown manor, used to be some sort of fraternity. But at least the co-op residents are still enjoying themselves. Groups of them are always out on the lawn, reading and sunbathing. Someone set up a red slackline in the front yard. The same boy practices on it every day, balancing a worn stack of books on his head.

In 2025, co-ops like Columbae are scheduled to go through the CORL process and be made to re-justify their existence like every other house. I try to imagine the brown mansion renamed “549,” becoming yet another numbered house with an empty lawn.

It seems bizarre to force organizations to reorganize their themes and make the priority of all of them DEI initiatives, but this doesn’t explain the elimination of other actions and social groups, like Anarchists house, the draining of a lake where students used to party, or the banning of the clothes-optional party. Perhaps another key is in Davis’s penultimate paragraph:

An empty house is safe. A blank slate is fair. In the name of safety and fairness, Stanford destroyed everything that makes people enjoy college and life.

I suggest that part of this dismantling of “fun” involves “safety” of the in loco parentis form: students are not to do anything that could look bad, rowdy, or even be dangerous, like drinking at parties. Lukianoff and Haidt see this kind of atmosphere as “safetyism” resulting from overparenting and a desire to protect adolescents and teens from every sort of harm. The “equity” bit comes in as part of the rules for new or revamped social groups, but can’t in itself explain the dismantling of fun and eccentricity that, according to Davis, was one attraction of Stanford.

I have no idea what’s going on, or even if Davis is exaggerating, but those are some thoughts, and if you’ve gone to Stanford, or know something about it, read Davis’s piece and weigh in.