I like Freddie deBoer, and am pondering subscribing to his site, because more than anyone he writes good stuff in a relaxed, conversational style/ I like his anti-wokeness and especially his humor. You can read his column this week for free, but subscribe if you can. Click on the link below; it’s a hilarious piece that also rings true, and should get you thinking about the woke:

deBoer’s aim is to compile a list of “good white men” who are ALLIES to the marginalized but whose accomplishments are largely performative, calling attention to their own moral purity while telling other white men to shut up and listen to those who are marginalized. Of course, as deBoer points out, this means they’re telling themselves to shut up, and their self-promotion is over the top. They cannot resist telling us how good they are.

I have heard of only a few of the 12 men he singles out, but deBoer’s description of their self-aggrandizement is really funny. Nor does he except himself (he’s on his own list!), for by enumerating these big egos who act like “allies” but are really egocentric, deBoer recognizes that he’s putting himself above them, too.

I’ll give an example of his humor with his opening, which I love:

You could be forgiven for thinking that we’re witnessing the end of the era of the white man. Headlines saying such are not hard to come by, after all, and media and academia are captivated by the notion that we white men must soon give way to women and people of color and, like, gray ace demisexuals or some such. So funny, then, and so profoundly American, that some of the most successful self-marketers of the 21st century are white men. They are, in fact, Good White Men.

There’s nothing wrong with being a white man who wants to do good. I am one, after all. The trouble is that the Good White Men believe that white men in general have some sort of inherent badness, that at the very least white men bear a special burden of helping to end injustice and to “center” women, people of color, and other minority groups, to step back and let others speak. Good White Males think whiteness and maleness are problems to be solved. The trouble here is twofold. First, simply by nature of being Good White Men, by the very act of endlessly talking about the sinful nature of other white men, the Good White Men exonerate themselves from the very critique they advance. Constantly complaining about the evil done by white men inherently and invariably functions to contrast themselves with other, worse white men. Being the white man who talks about the poor character of most white men cannot help but shine your own character. No matter how reflexively you chant that you realize that you yourself are part of the problem, no matter how insistently you say that you’re included in your own critique, you aren’t. You can’t be. To be the one who makes the critique inevitably elevates you above it.

He who humbleth himself wishes to be exalted.

Second, standing up and demanding that everyone pay attention to someone else sure is a good way to monopolize attention for yourself. If you go on your podcast, blog, cable news show, or social network as a white man and tell other white men they need to shut up and listen, you are definitionally not shutting up and listening – and, of course, doing so in such a way as to receive credit for doing it. Put another way, Good White Men constantly tell other men and white people to step back and listen but absolutely never shut the fuck up themselves. Each of these guys could walk the talk by just unplugging and no longer filling the airwaves with their opinions, and in so doing cede space to POC and women and whoever else. That they don’t is the most damning indictment of their project.

And here’s a list of the Good White Men. Read deBoer’s descriptions, which don’t dox them but are about as snarky as you can get. Most on the list below are journalists, and I’ve heard only of Chris Hayes and Chase Strangio,

l.) Freddie de Boer. As I said, he doesn’t exempt himself.

And at the risk of overquoting, I’ll show you what deBoer says about Davidson, commenting on one of Davidson’s tweets: 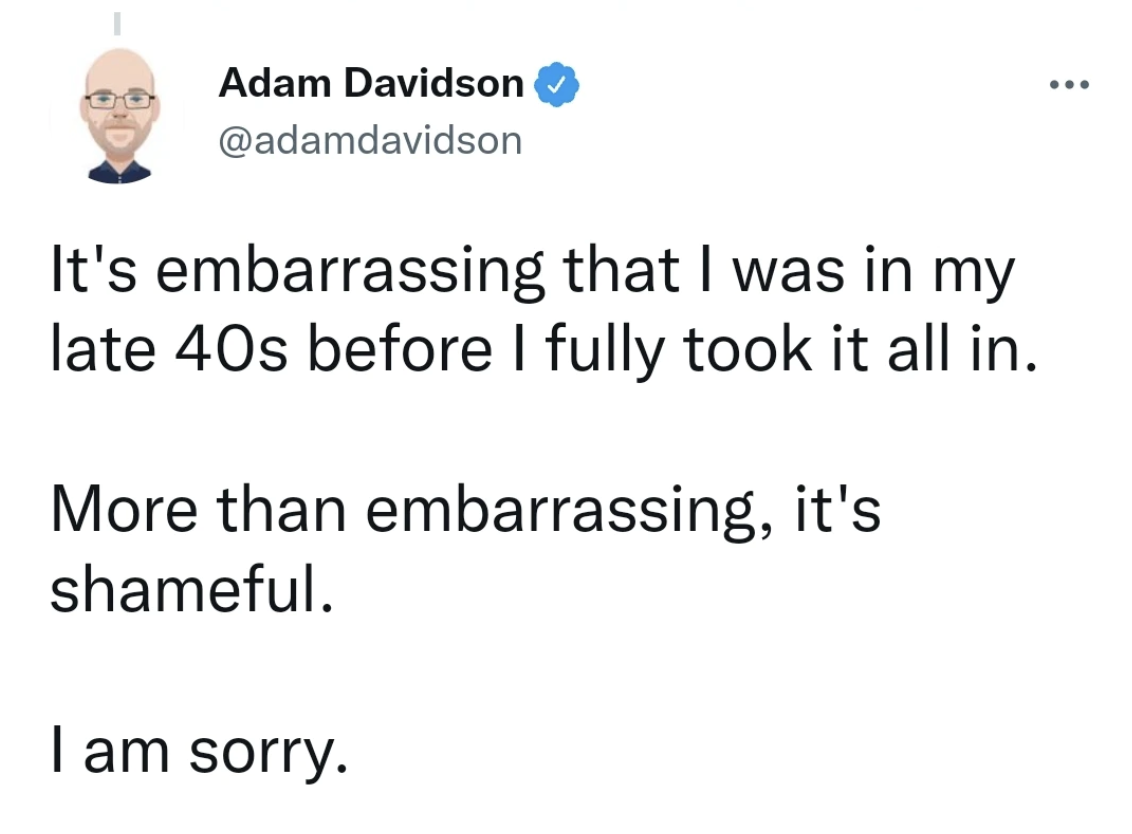 I could give you the context to this tweet, but honestly… do I have to? Would it matter? This is it, here, this is the goods; this is the Good White Man in his Platonic form. Davidson here is engaged in an act of supposed self-criticism – it turns out that this is somehow about Jeffrey Epstein and thus also about rape culture, or whatever other abstraction is hot right now – that in fact functions to lionize Adam Davidson and advance his brand. He’s so very sorry, everybody, and it cannot escape your notice that he’s more sorry than everyone else; that’s what an advanced being he is. He apologizes, but only in the context of referring to some earlier, fallen self, and in doing so he inescapably valorizes his current self. Hey, you guys, you know who else is like that earlier Adam Davidson who didn’t care enough about child trafficking or whatever the fuck? You. That’s right. Adam Davidson is better than you, and he has the apologies to prove it. Such a strange quality, apologies have – the lower you stoop, the higher you climb. Useful, that. I bet Adam is crying in front of some waiter right now as he explains why he shouldn’t have to pay for his meal. Adam: if you’re receiving thousands of digital strokes for making an apology, it’s not a real apology.

The piece really is a hoot, but it has a serious purpose: to call attention to the purveyors of Performative Wokeness, whom I encounter constantly. These are the people (almost all white) who call attention to their purity, either directly or indirectly—with the latter coming through gestures that look good but accomplish nothing for social justice. In the end, it’s a way of showing off, for the admirable people who truly care about social progress put their shoulder to the wheel and ignore who gets the credit. I, for one, am tired of them, and I’ve renewed my vow to not genuflect or be cowed by such people, and to call attention when necessary to the uselessness of their self-promotion.

Another example. Chase Strangio is the gender rights lawyer for the ACLU, and how did he come to public attention? By calling for the banning of Abigail Shrier’s book Irreversible Damage: The Transgender Craze Seducing our Daughters.  Getting that book banned was a “hill he would die on.” Imagine—an ACLU lawyer favoring banning a book! He is a transman, but so what?  This is an example of someone urging censorship and violation of free speech because he doesn’t like the speech. (If you think Shrier’s book is “hate speech,” I urge you to read it.) 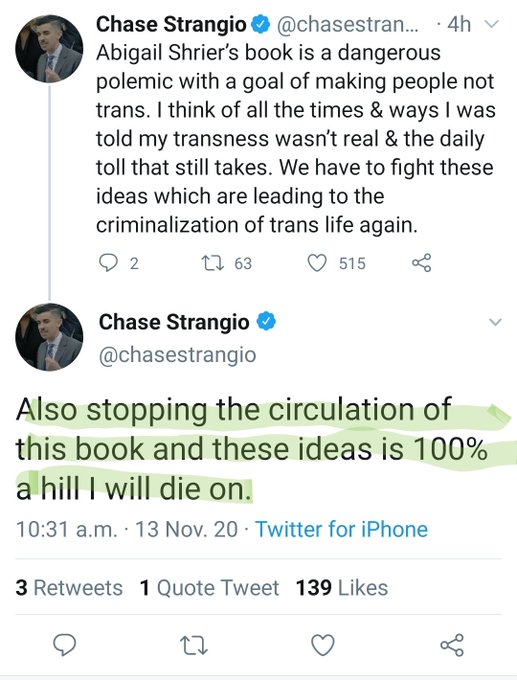 We should be made as hell and vowing not to take this any more. Social justice is great, but performative social justice is obnoxious and should rightly be reviled and mocked.