Send in your photos lest this feature die!

Today’s photos come from reader Mark Sturtevant, specialist in arthropod photography. His IDs and text are indented, and you can enlarge his photos by clicking on them.

Here are more pictures taken in 2020.

One day while hiking in the woods, a large flying beetle made a noisy passage across the trail. I managed to knock it down. This is Osmoderma scabra, and it’s only slightly smaller than a walnut.

After a few minutes it had enough, popped out its wings, and lumbered away through the air: 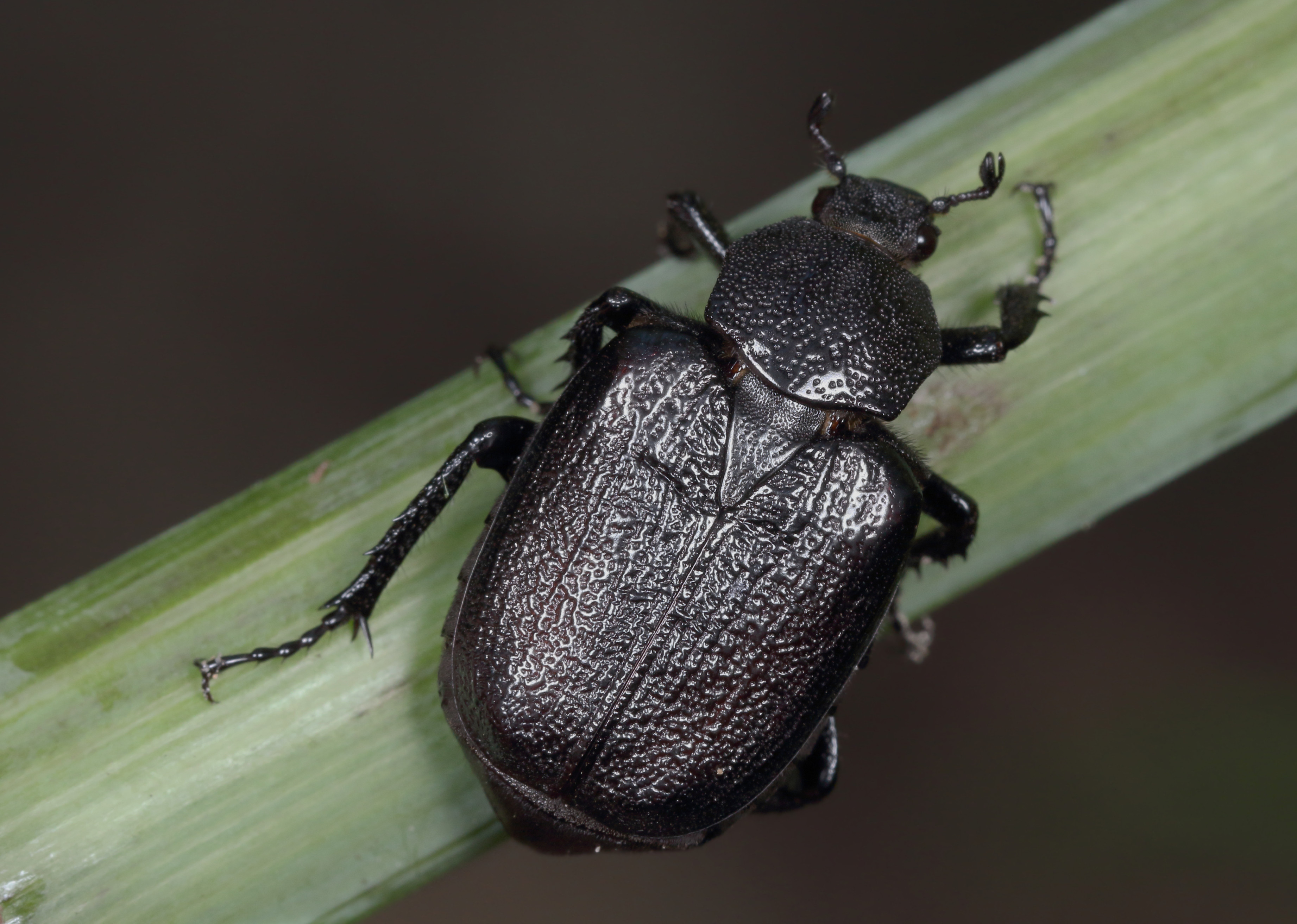 I recently showed a group of strange insects called bark lice. They’re in the same order as parasitic lice, but bark lice are more into feeding on lichens and algae. Some bark lice have wings; here is a handsome example of one. It is Cerastipsocus venosus. 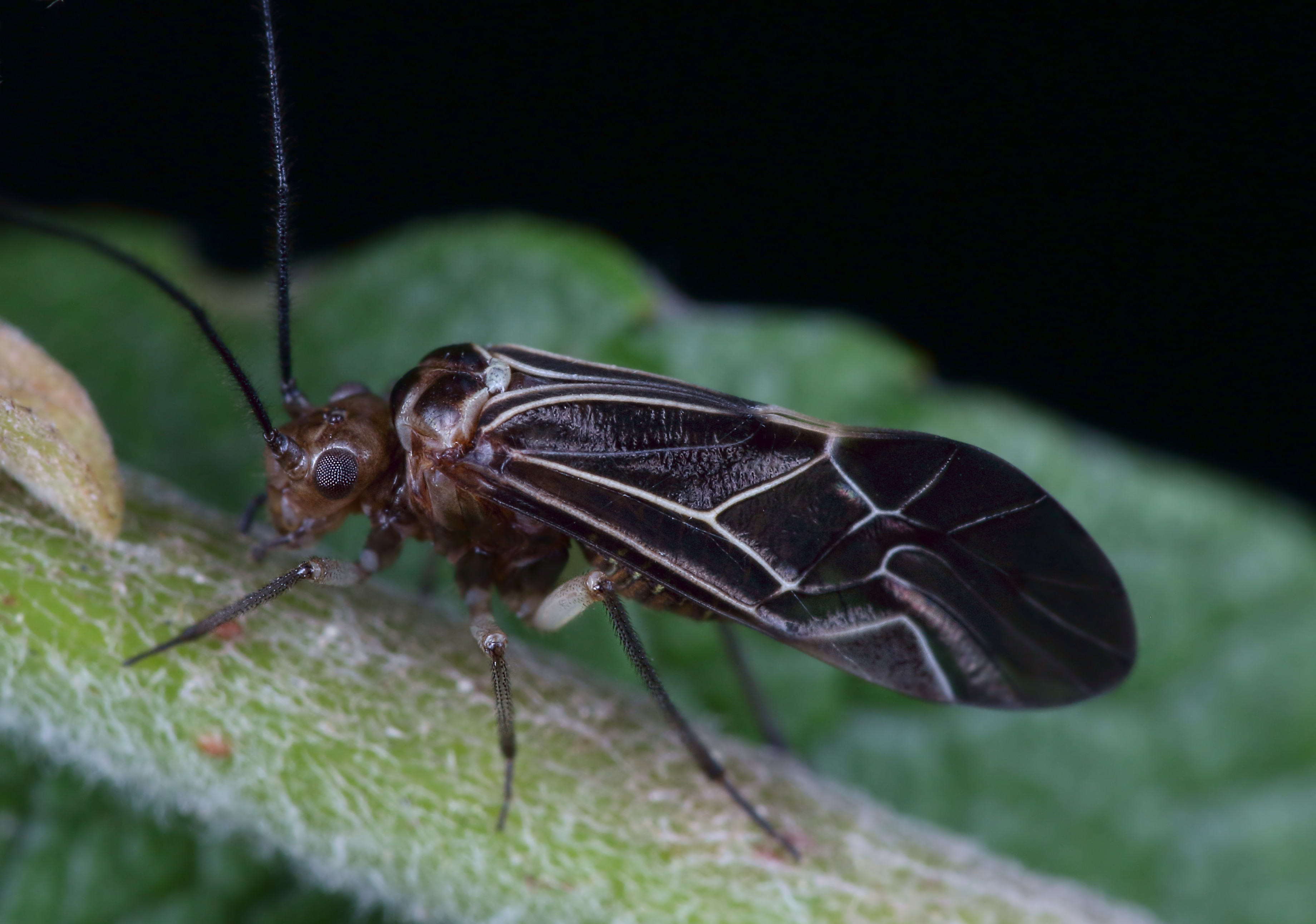 Bark lice are pretty alert and fast. But evidently the one shown in the next picture was not quite fast enough. Based on some details like the relative length of the legs, my guess is that the spider is one of the running crab spiders (species unknown). It was quickly hauling its prey along the twig. 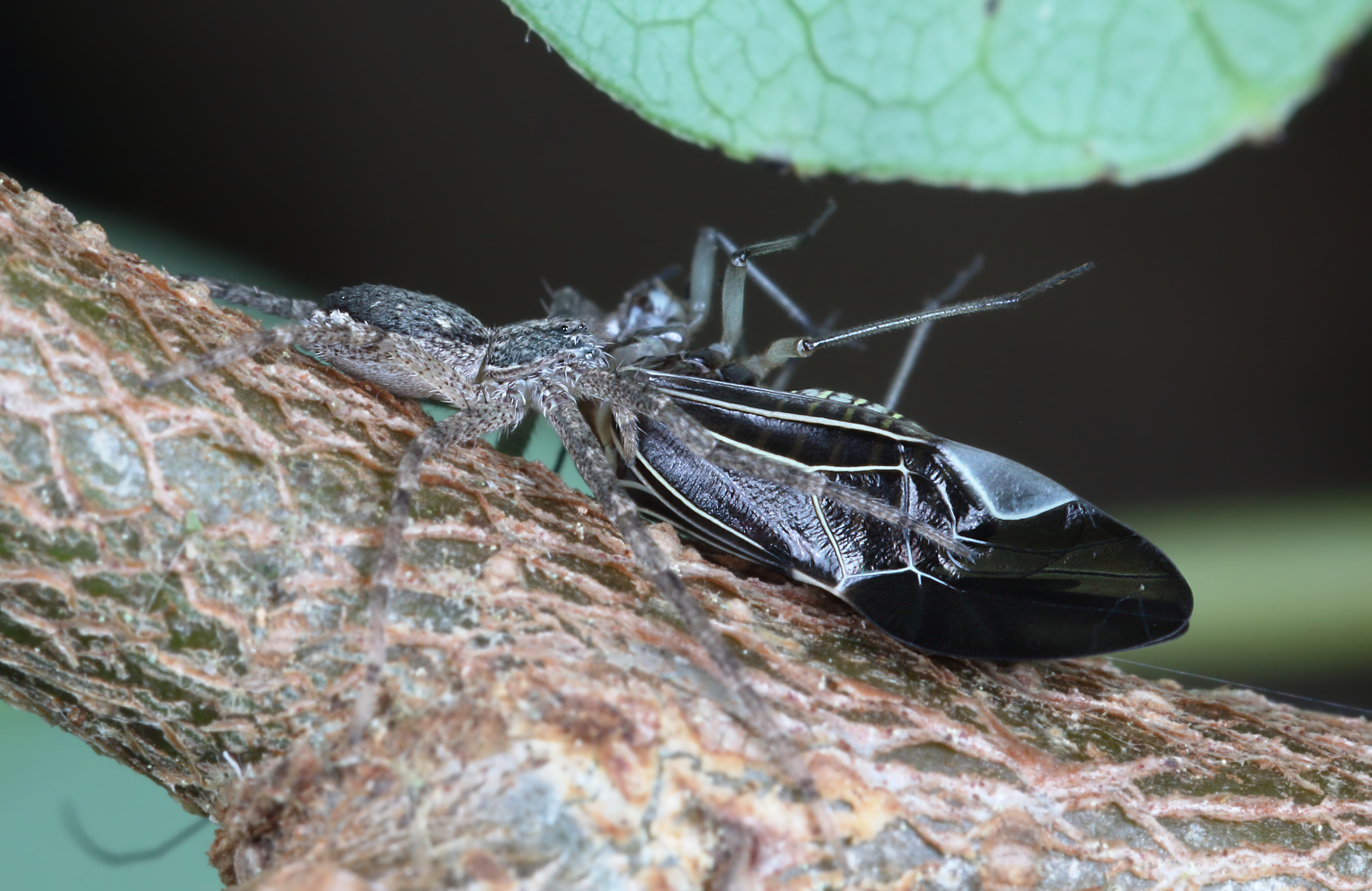 An extremely common visitor to our porch lights is this lovely little Geometrid moth known as the green pug, Pasiphila rectangulata. Cherry trees are one of their host plants, and we do have one, probably explaining why I see them so often. 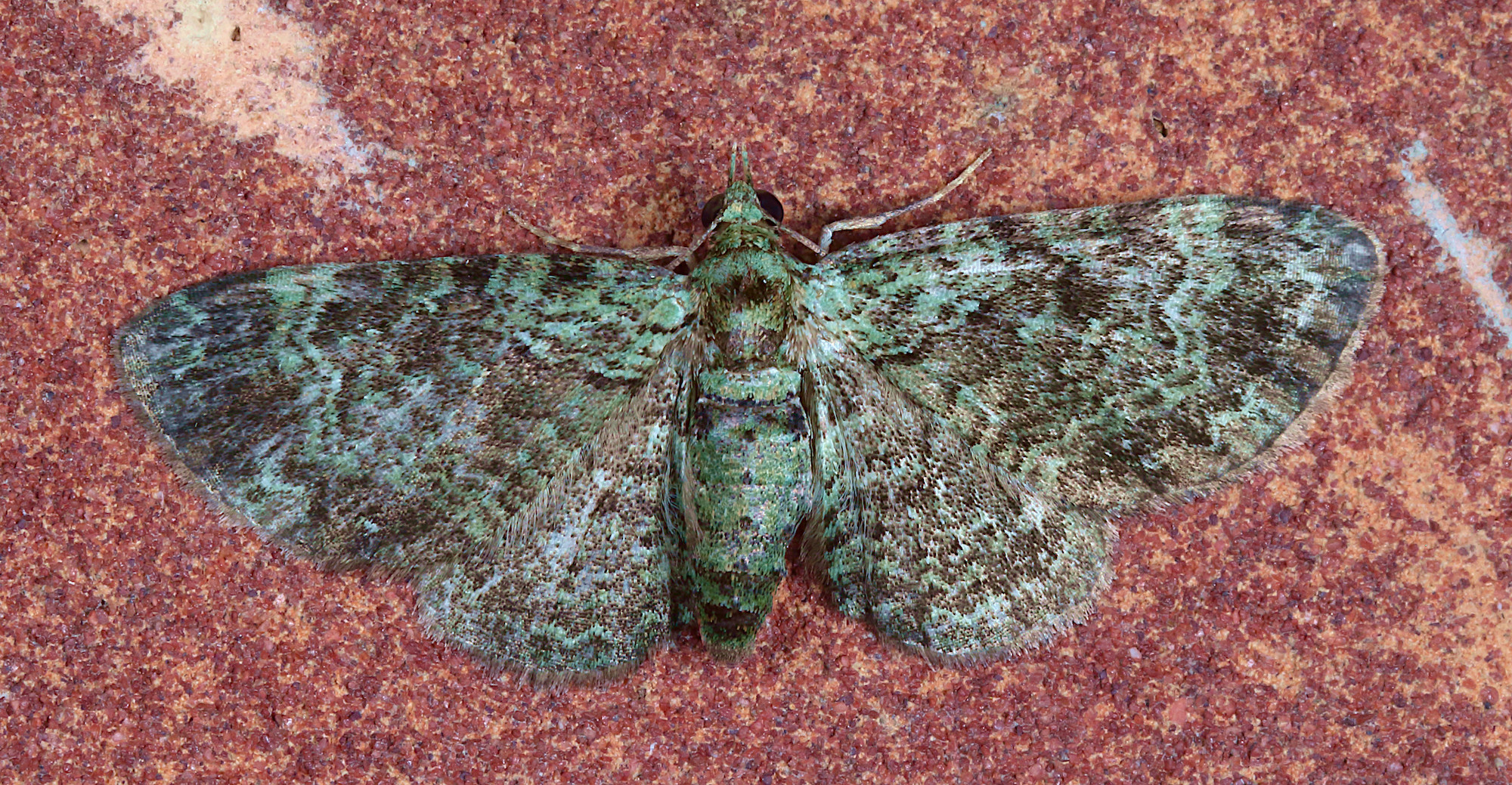 Let’s stay with the Lepidoptera. Next is a lovely Virginia ctenucha moth (Ctenucha virginica), a species found along wood margins. They resemble the closely related yellow-collared scape moth that frequents fields, and together they are part of an extensive mimicry complex that includes several orders of insects. Some members of the complex are distasteful, or they sting, and others are imposters. 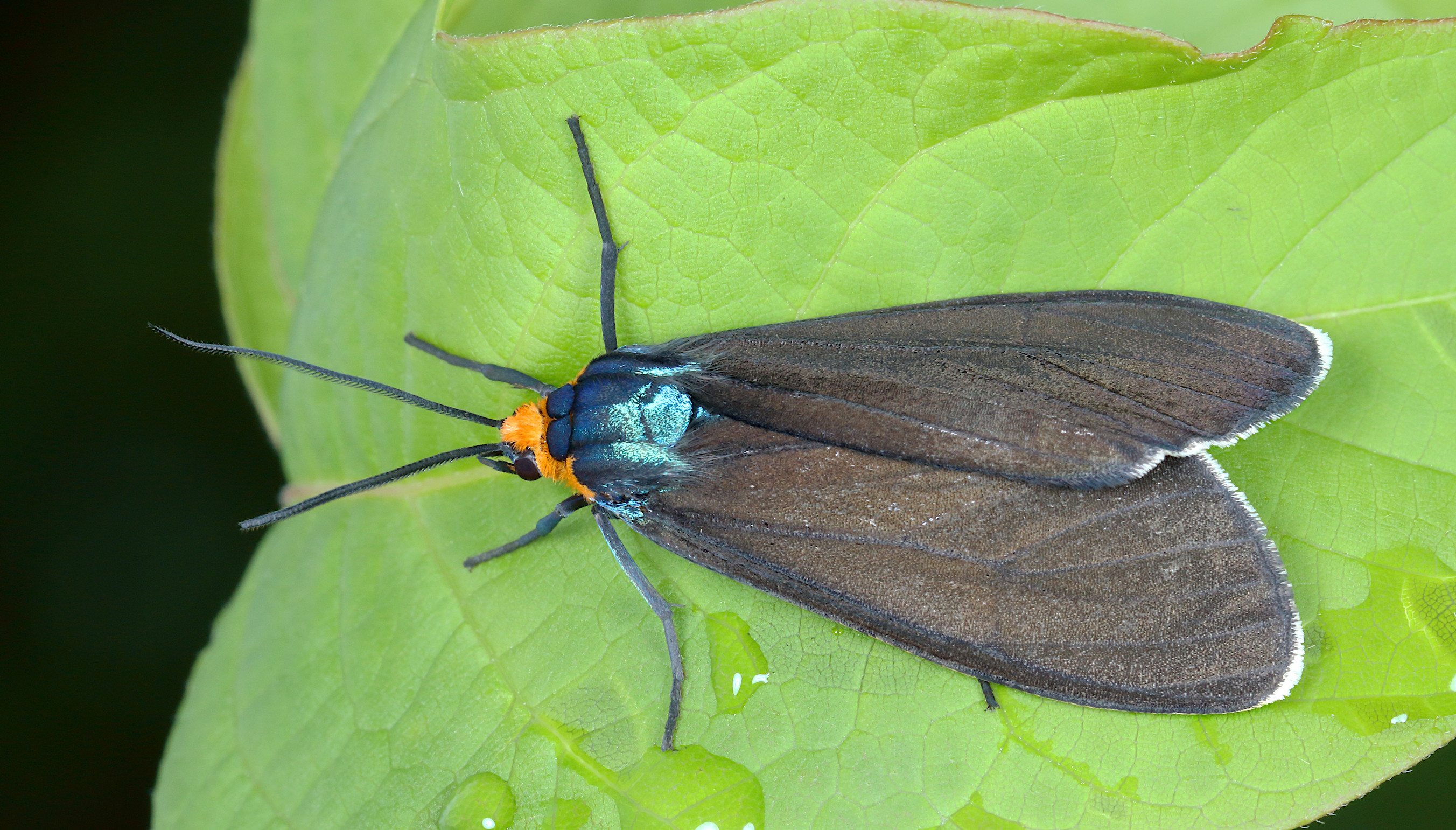 Next up is a caterpillar that was clearly preparing to form a chrysalis. Spiny caterpillars can be hard to identify, but I kept this one and it later emerged as a grey comma butterfly (Polygonia progne). 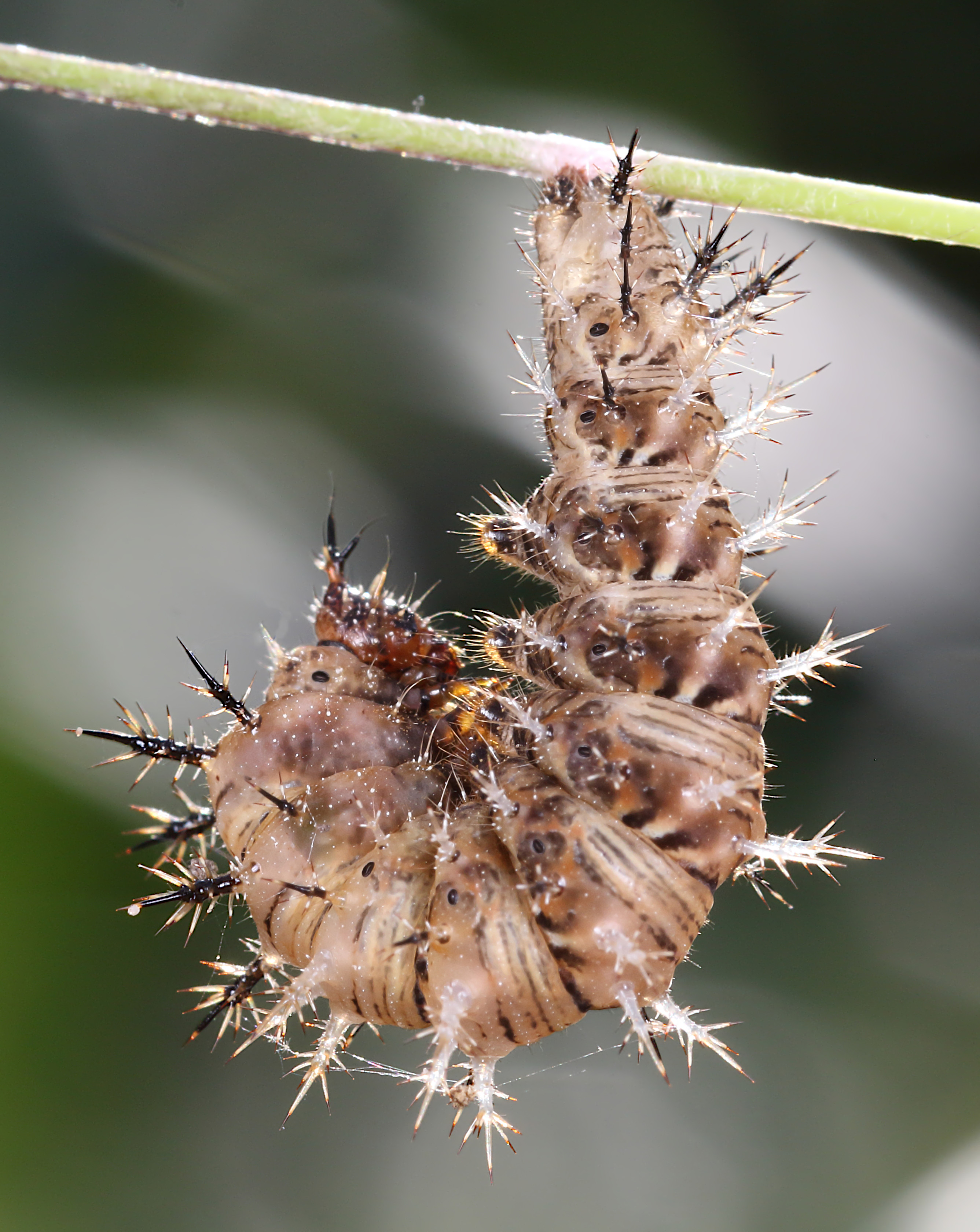 And next is that same butterfly with recently expanded wings after emerging from its chrysalis. The reason for its common name is because of the comma-shaped mark on the underside of the wings. The upper side of their wings are mostly orange, but they spend much time sitting with wings closed on the ground among the dead leaves. In this circumstance, they are nearly impossible to see! 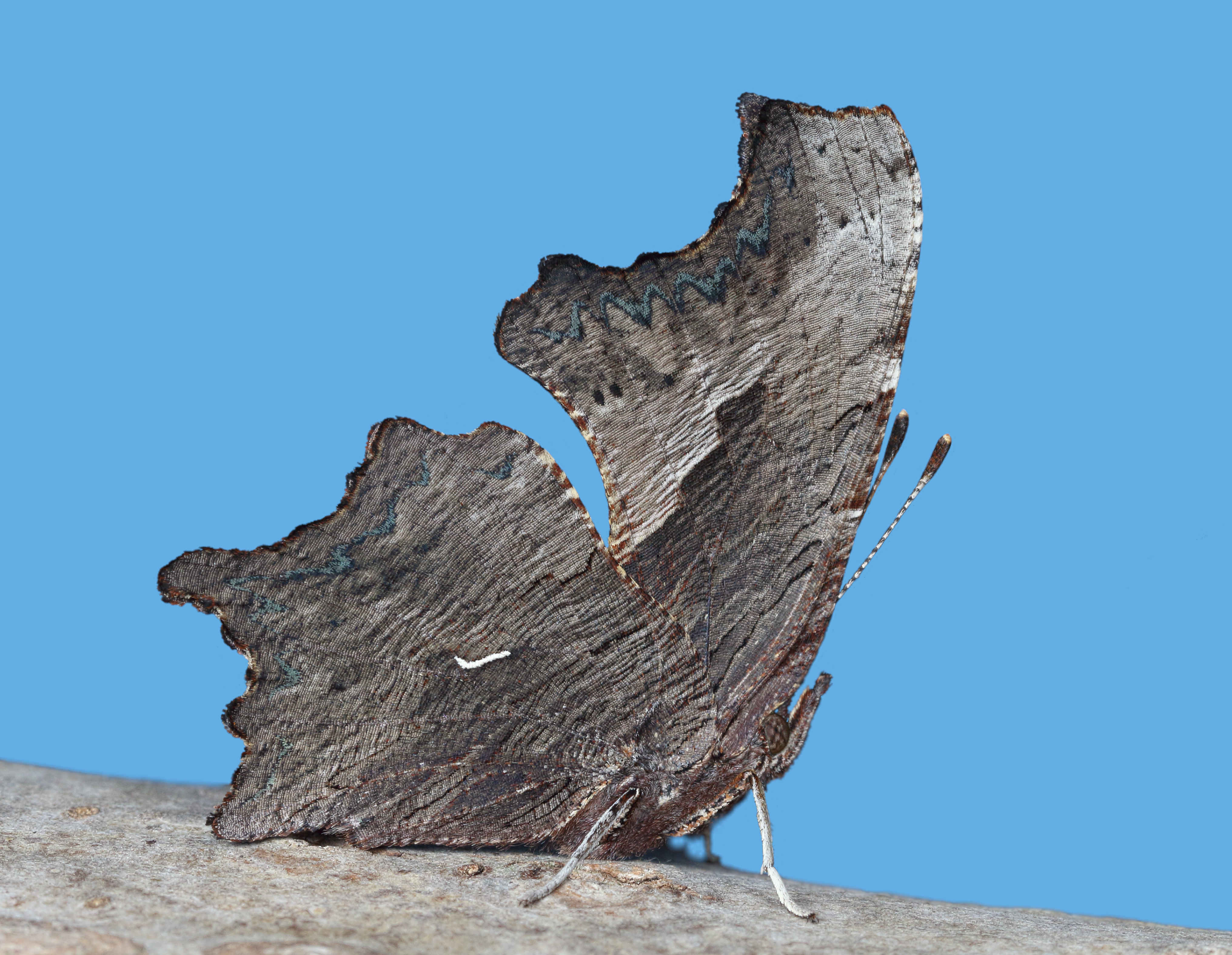 Next up is a little planthopper called Acanalonia conica. These cute little insects are amusing to photograph, because when they realize they are being watched they deviously move to the back of the twig. The trick then is to extend a finger behind the twig, and that makes them sidle back out to sit in plain view. 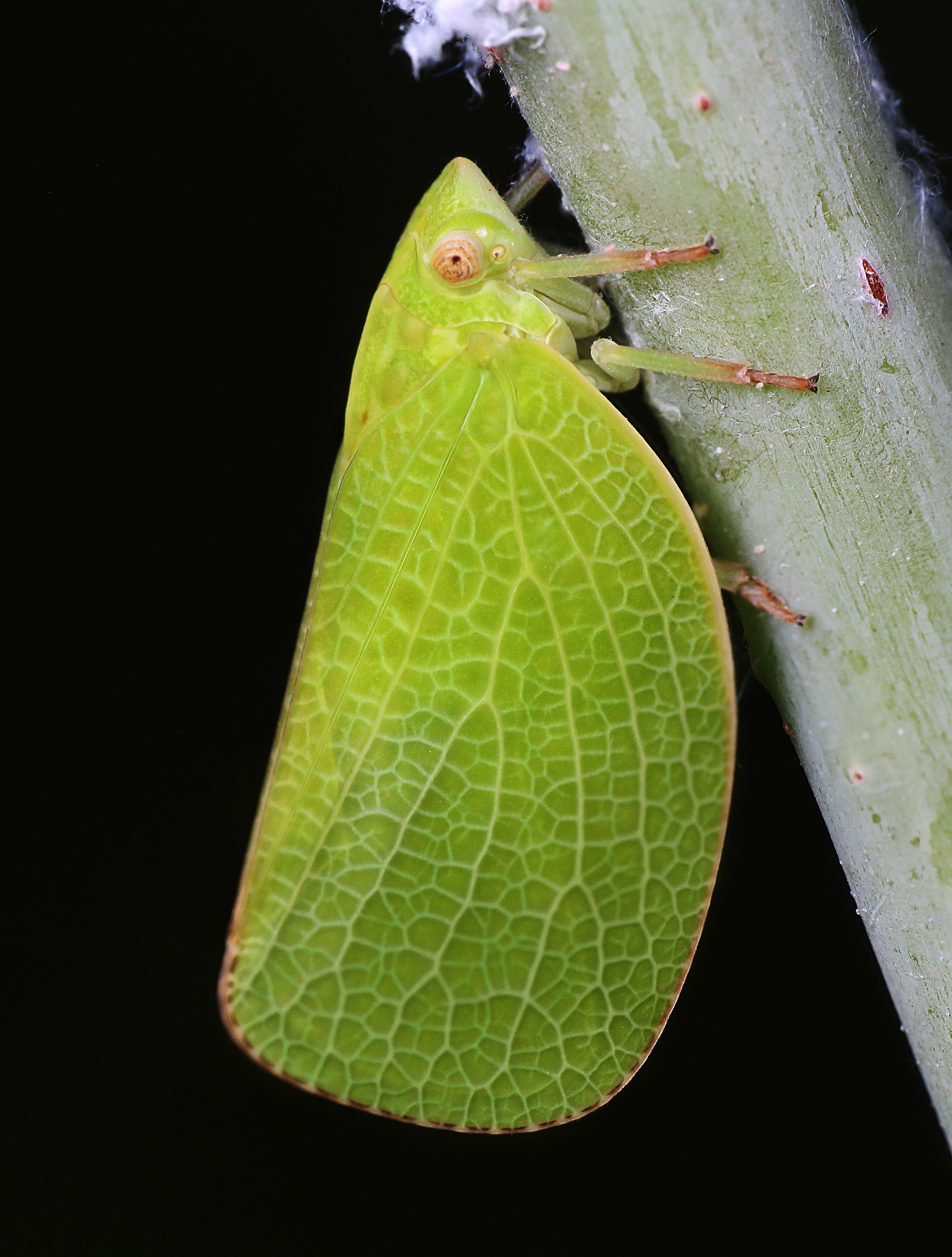 The house centipede (Scutigera coleoptrata) is a fairly cosmopolitan species that favors living in houses. As a result, many people know what it’s like to live with house centipedes. Let’s see. . . they attain a size that makes them a bit unnerving, they move fast, and they do have a tendency to suddenly dart out across a wall while you’ve settled down for the evening. I think that about covers it. Folks who live with house centipedes always have strong opinions about them, although they really cause no problems.

Here are some photographs of one that are actually focus-stacked from dozens of pictures taken during a staged setting on the dining room table. Lights were kept off, save for a lamp, and that helped keep it calm. Even so, I am rather surprised this even worked. A few times it did zip away into the dark surroundings, and it was challenging to find again. 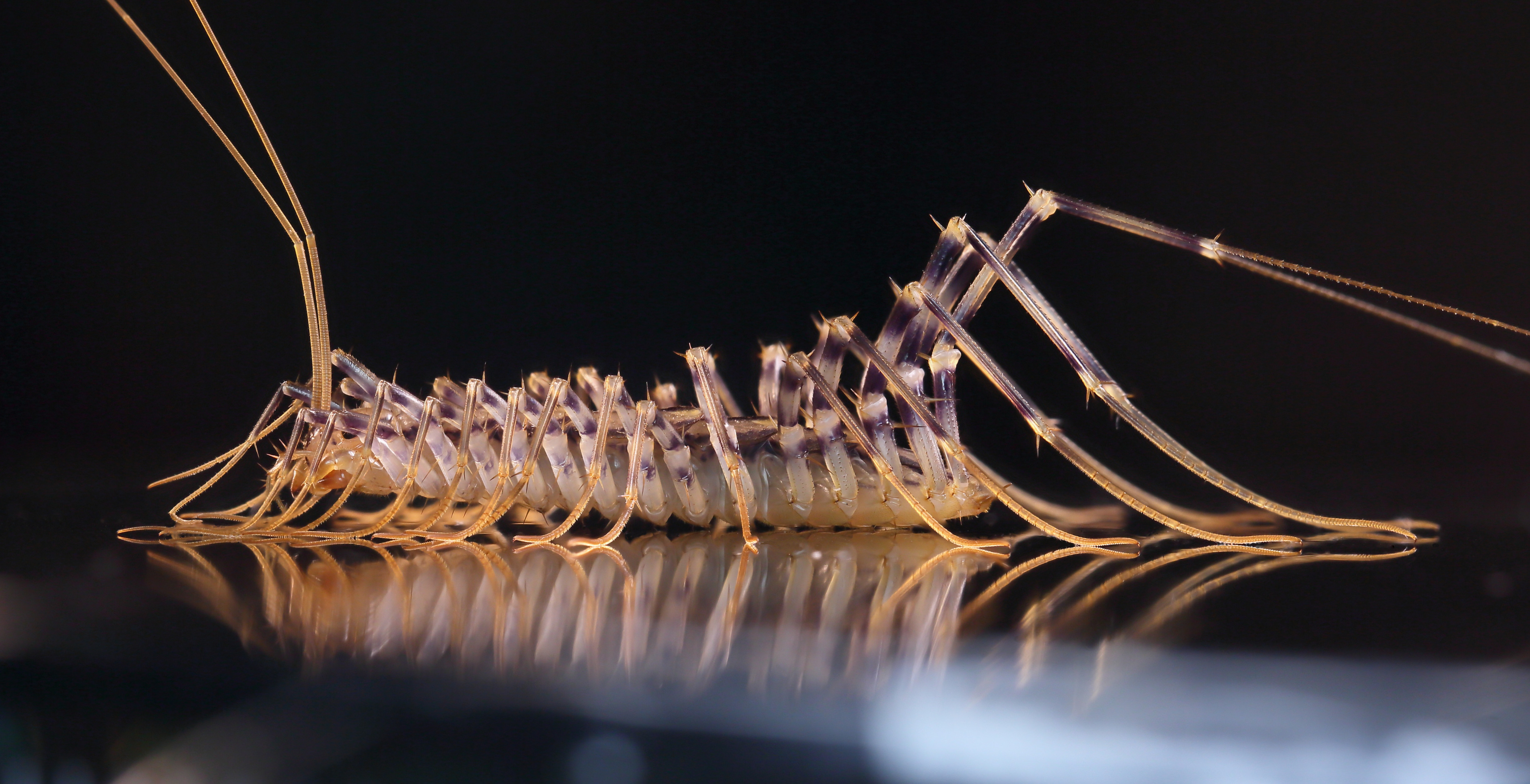 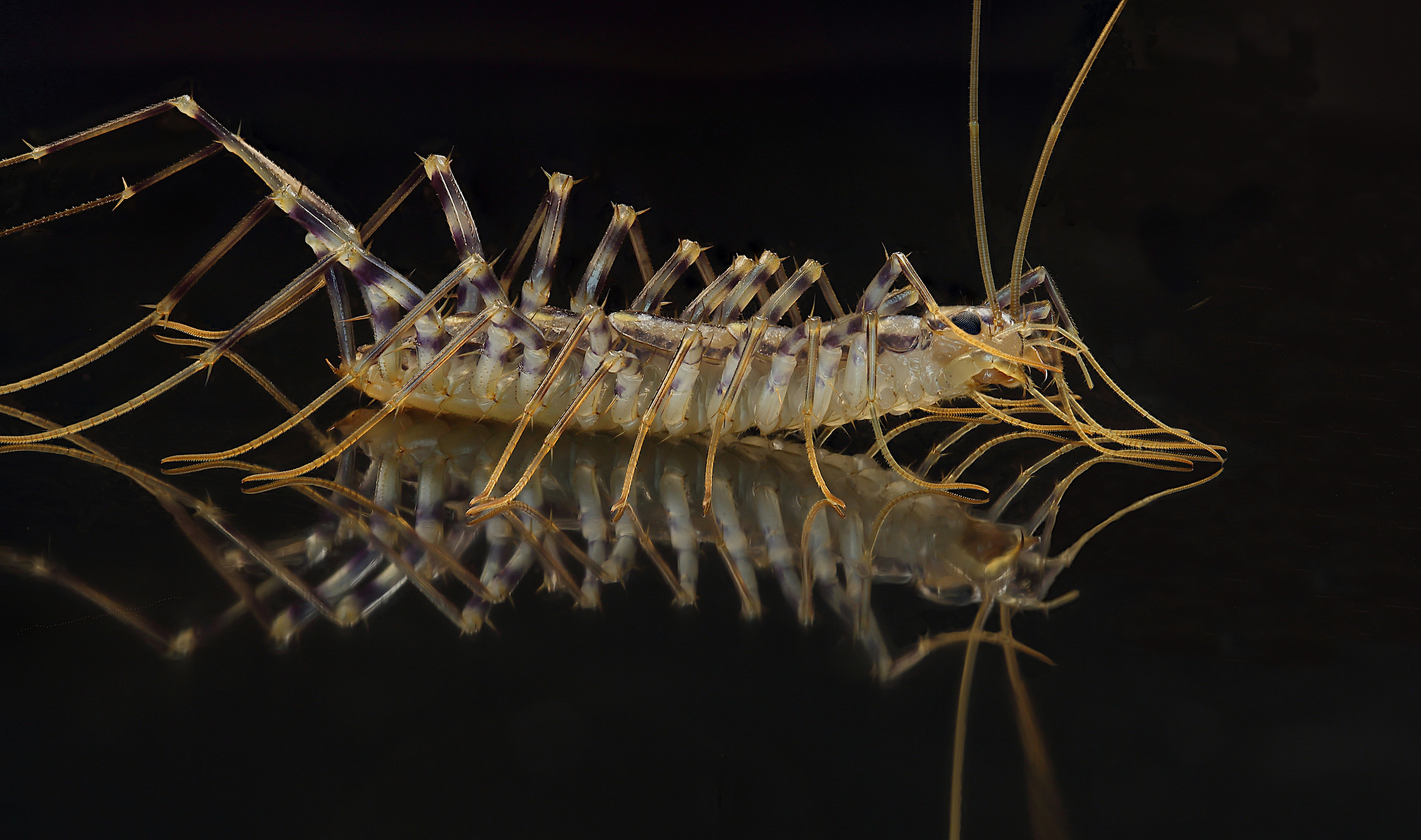