I am back home, having showered thoroughly and tossed my muddy clothes into the washing machine. So now it’s Wednesday:  Jesus and Mo Day.

This is the story Jesus is reading.

And that’s from the Telegraph & Argus, which may be the West Yorkshire version of the Torygraph. In short, Muslims have been offended:

A protest against a new film claimed to negatively depict deeply loved religious figures has been held in Bradford.

The Lady of Heaven portrays the life story of Lady Fatima, the daughter of Prophet Muhammad, weaved together with the tale of young Iraqi orphan in modern day.

It has now been released nationwide, including places with high Muslim populations such as Blackburn and Manchester, through mainstream cinema chains such as Vue, Cineworld and Showcase.

But some Muslims have expressed feeling hurt and angry over the film, suggesting the plot goes against their understanding of historical events.

It shows Muhammad’s face, though it’s computer generated. And there are other beefs, too:

The Prophet Muhammad’s face is a mixture of computer generated and lighting imagery.

The film said holy personalities were not represented by ‘any one individual’ and were made up of computer-generated images.

Critics say it also looks to liken an ISIS assault on a woman to an inaccurate story of how two of the Prophet’s closet companions were responsible for an assault on his daughter Fatima to the fourth caliph Ali, revered highly by both Shias and Sunnis.

Ergo, there are demonstrations to shut the film down (I wonder how many of these people have seen it?), which are of course legal, but the protestors criticize larger issues of freedom of speech:

He added: “You have no right to tell us our history. We will not let this film go on further.”

Is a fatwa in the offing? At any rate, here are Jesus and Mo discussing it, and Mo isn’t paying attention. 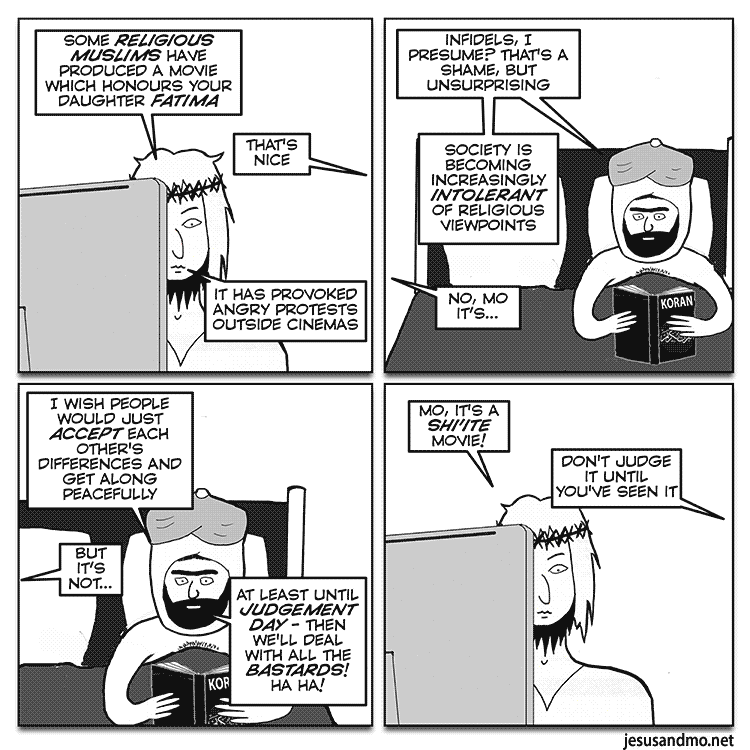