Today we have another photo-and-story tale by reader Athayde Tonhasca Júnior, this time about amazing ways that flowers have evolved to reproduce by taking advantage of insects. His tale of pollination is indented, as are the pictures (not his, but credited). You can enlarge the photos by clicking on them:

‘You WILL pollinate me!‘: pushy characters of the plant world

When an insect visits a flower, some pollen grains become accidentally attached to its body. The insect moves on and some of the pollen is transferred to the stigma (the part that’s receptive to pollen) of another flower, kicking off the process of plant reproduction. 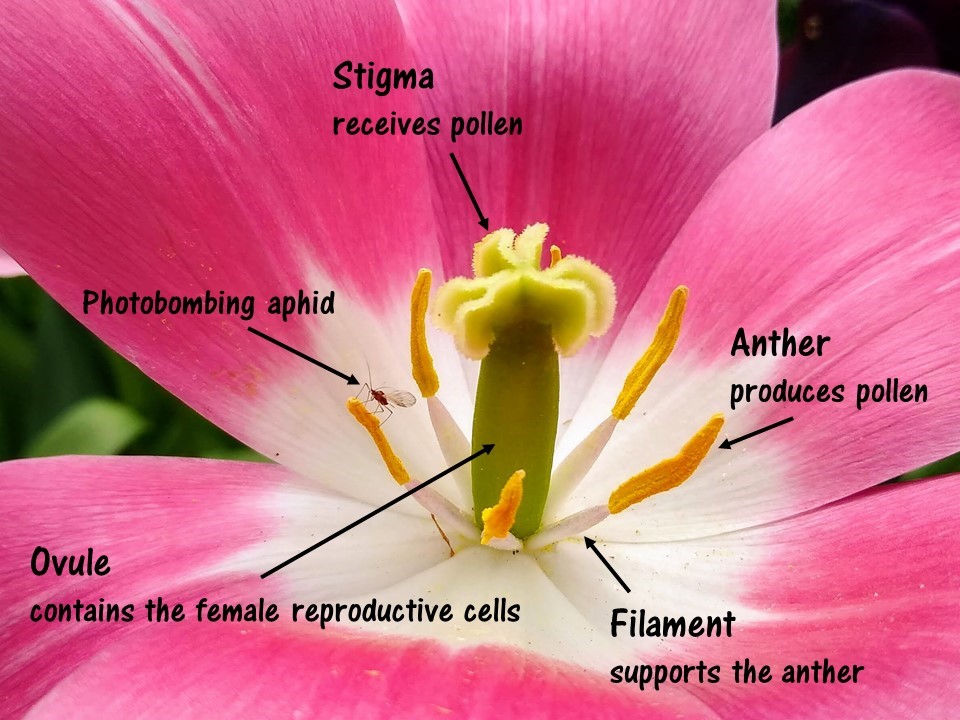 Such a passive, leave-it-to-chance approach is not good enough for some plants. Evolutionarily speaking, they have taken the matter into their own hands by forcing pollen onto visitors.

The mountain laurel (Kalmia latifolia) is a perennial shrub native to the eastern United States and well known on the other side of the Atlantic as an ornamental. The anthers of the mountain laurel flower are attached to small pouches on each petal. As the flower matures, the petals curve backwards, pulling on the stamen filaments, which bend under tension.

Fig. 2. A mountain laurel flower with eight of its ten anthers inserted into pockets in the corolla and held under tension © Derek Ramsey, Wikipedia: 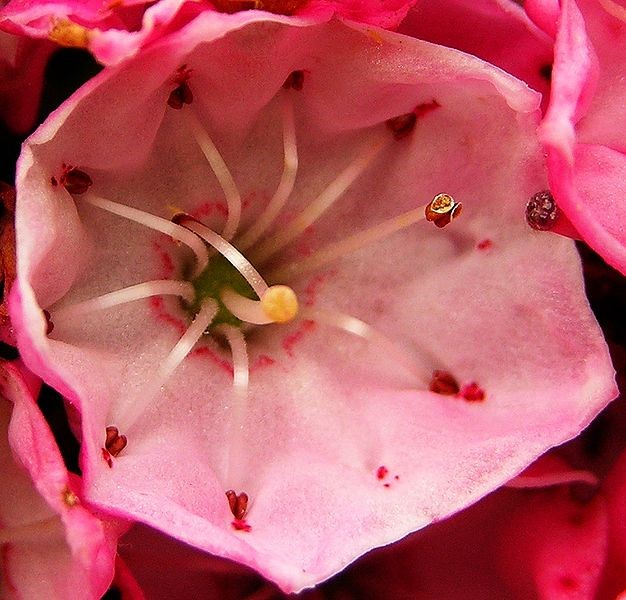 When a relatively large insect such as a bumble bee lands on the flower, it may trip on a filament, releasing the anther from its pocket and launching pollen into the air at great speed. As most of the pollen is flung towards the centre of the flower, researchers believe this catapult apparatus results in more pollen grains attached to bees.

Alfalfa or lucerne (Medicago sativa) has a similar mechanism: its stamen filaments are stuck together into a structure called a ‘sexual column’, which is held under pressure inside two bottom keel petals that are fused together. When a bee pushes on these petals, the column is released, springing upwards and slamming into the upper petals. This process is called ‘tripping the flower.’ When it happens, pollen falls on the flower’s female reproductive organ and also on the bee, which then moves on to another flower. Some bees such as the European honey bee (Apis mellifera) don’t appreciate being whacked by a plant, so they avoid alfalfa or learn to get to the nectar without tripping the flower. Farmers can’t count on finicky honey bees, so they rely instead on the alfalfa leafcutter bee (Megachille rodundata) because this species is not bothered by a slap or two. Follow the whole story in this video (flower tripping from 2:20). 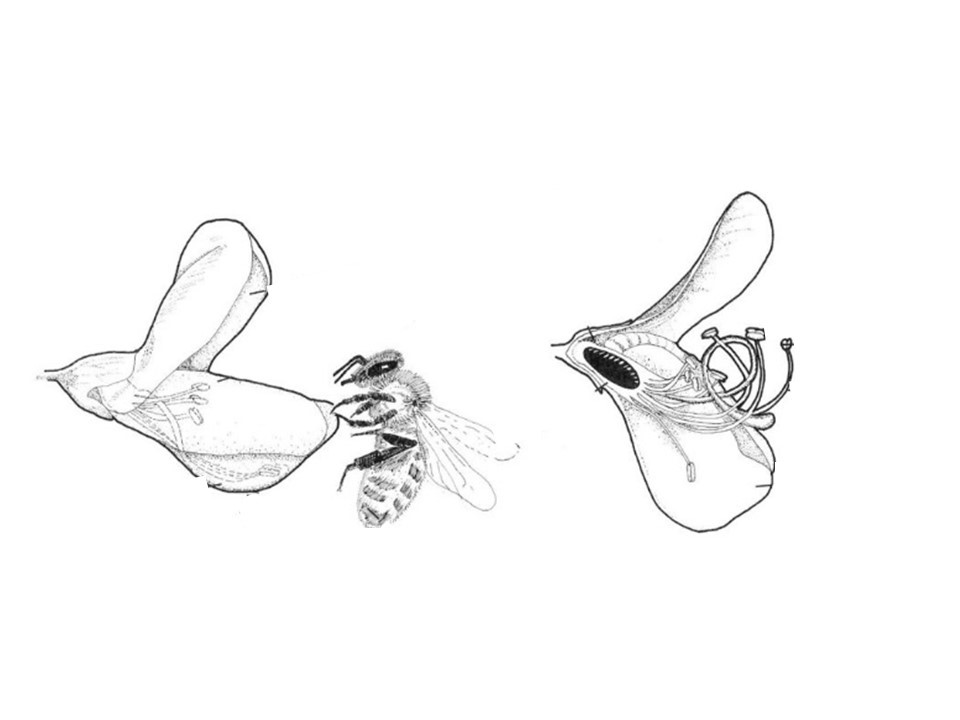 The tricks performed by the mountain laurel and alfalfa are known as explosive pollen release, and similar devices have evolved in plants from several families. Insects are not always involved: sometimes plants rely on explosive pollination to launch pollen into the air so that it can disperse long distances and, with luck, drift towards a receptive flower.

Flower tripping is an ingenious mechanism, but it pales in comparison to the stratagem employed by Neotropical orchids in the genus Catasetum. These plants awed and puzzled Charles Darwin: ‘I have reserved for separate description one sub-family of the Vandeae, namely the Catasetidae, which may, I think, be considered as the most remarkable of all Orchids.’ (On the Various Contrivances by Which British and Foreign Orchids Are Fertilised by Insects, and on the Good Effects of Intercrossing, 1862).

Catasetum orchids are dioecious (either male or female) and display strong sexual dimorphism, that is, flowers of both sexes look different: so much so that male and female plants were once thought to be separate species. These flowers produce no nectar, but they secrete fragrances that are collected by male orchid bees (tribe Euglossini), possibly to use for attracting females: we don’t know for sure. 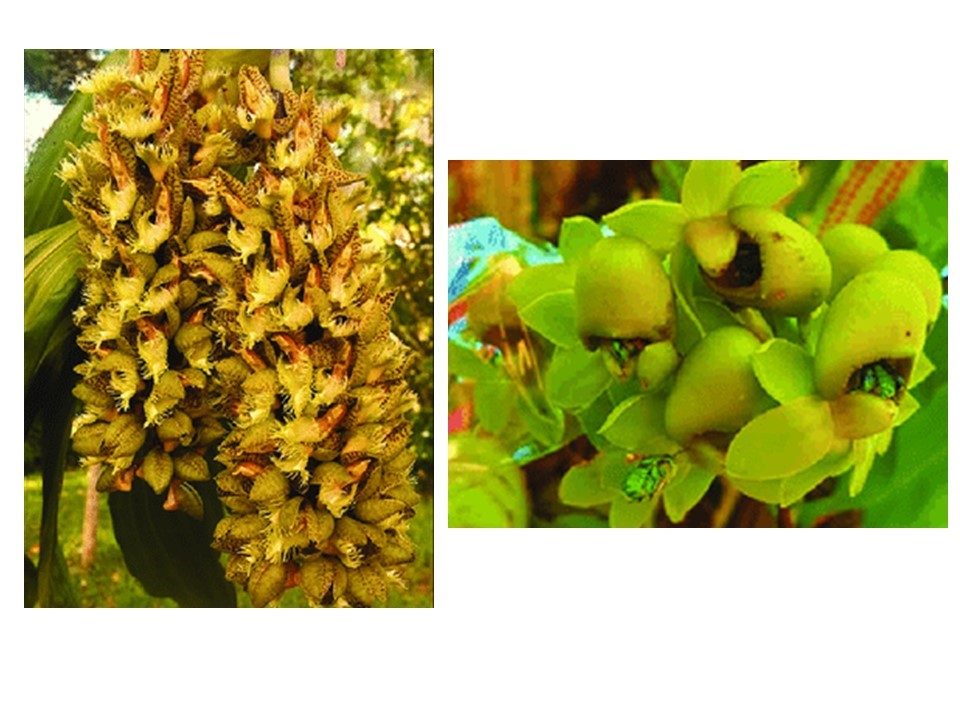 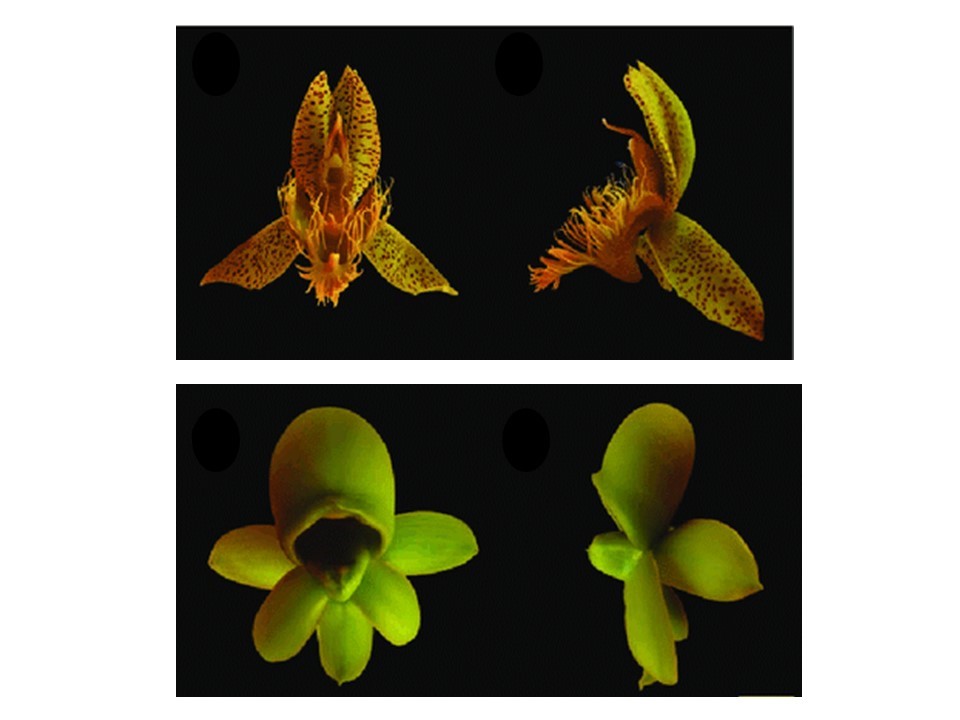 When a male orchid bee lands on a male Catasetum flower, it touches a pair of antennae-like structures that trigger the shooting of a sticky pollen blob known as pollinium against the unsuspecting visitor. It happens with such force that the poor bee is sometimes knocked off the flower. Watch the stunning (literally) speed of pollinium ejection here, which can reach 2.6 m/s. For comparison, a pit viper, another denizen of Neotropical forests, strikes at 1.6 m/s. We don’t know how the orchid does it, but apparently changes in electrical potential and tissue turgor are involved, similar to what happens with the sensitive plant (Mimosa pudica). Incidentally, Darwin never observed Catasetum flowers in the wild, but he reasoned that pollen ejection must be related to bee pollination. 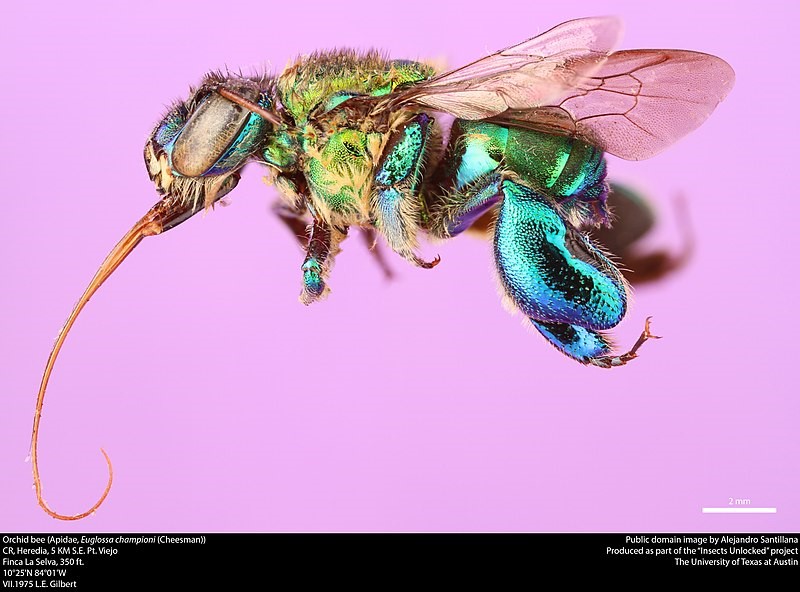 The male bee is not only surprised, but ends up with a hefty load as well: a pollinium can make up 23% of its body weight. He does not like this rough treatment one bit, so he may avoid a male flower on the next visit and go instead for a female flower, which does not have a pollen-spitting attitude. That suits the orchid just fine: the switch increases the chances of the pollinium lodging itself in a specialised receptacle of the female flower, fertilising it. 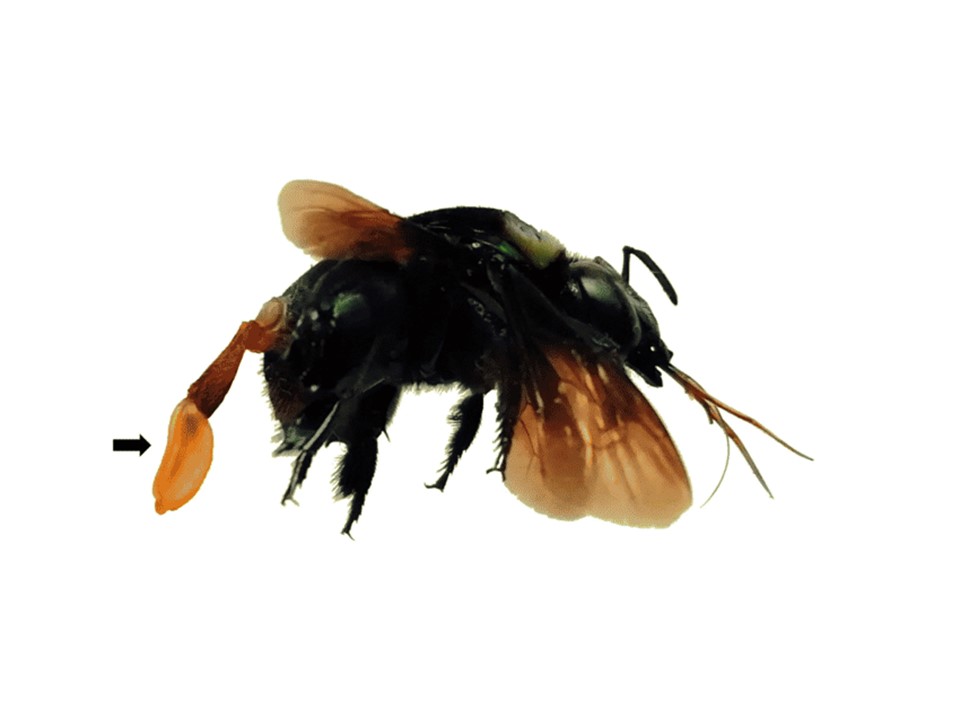 Some plants go beyond hurling pollen at unsuspecting visitors: they resort to coercive control.

In ancient Greece, nymphs were deities portrayed as gorgeous maidens who would hang around ponds, rivers and other outdoor spots. But their beauty was hazardous: just like those wicked mermaids, nymphs could lure a virtuous man who happened to be passing by, leading him to madness or perdition. 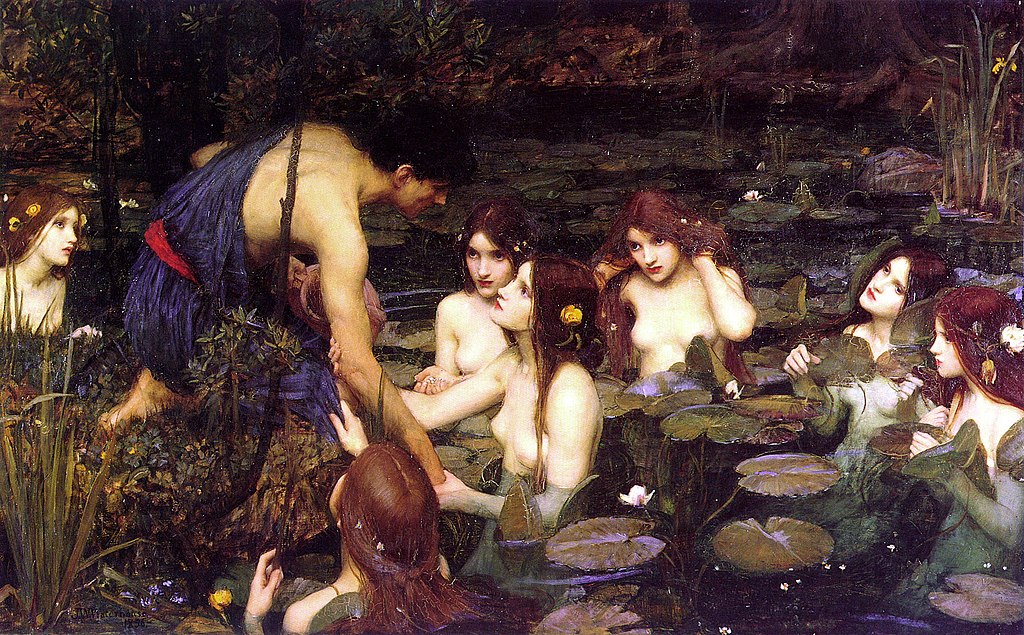 Nymphs may have been the product of overstimulated male fancy, but they also inspired the name of the water lily plant family, Nymphaeaceae. And just like the Greek nymphs, some water lilies do engage in devious charming, sometimes with fatal outcomes.

The white water lily or fragrant water lily (Nymphaea odorata) is an aquatic plant from shallow lakes, ponds, and slow moving waters throughout the Americas. It’s a popular nursery choice for ornamental ponds and water gardens around the world, but its floating leaves can form thick mats of vegetation, sometimes preventing light penetration and retarding water flow. So this plant is considered invasive in some places.

When a white water lily flower opens, its female parts are shaped like a bowl with the stigma at the bottom. This bowl is surrounded by a wall of stamens and filled with a viscous liquid full of sugars and detergent-like substances (surfactants). If this rigging has the look of a trap, that’s because it is one. 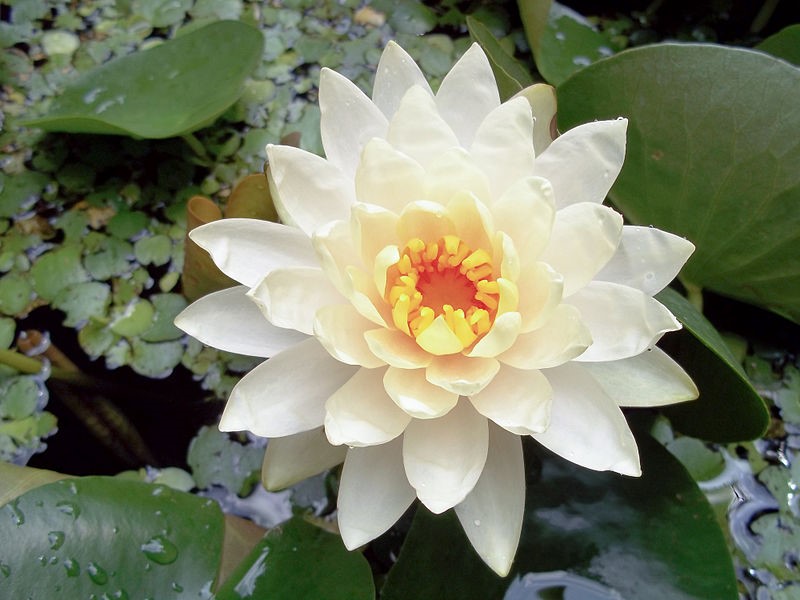 The fragrant flower – hence the epithet odorata – is irresistible to bees, flies and beetles. When a visitor lands, it falls into the bowl. It tries to pull itself out, but the slippery soup and the palisade of flexible stamens hinders escape. As the insect struggles, pollen attached to its body is washed off by the liquid. The pollen drifts to the bottom of the bowl where it comes into contact with the receptive stigma, pollinating the flower. The insect may eventually crawl out, or it may drown: it makes no difference to the white water lily. It’s got its pollen.

At the end of first day of blooming, the flower closes. When it opens again the next day, the stigma is no longer receptive and no fluid is produced, so visiting insects are spared a watery end. Instead, they can fly away covered with pollen if they drop by on the second or third day of blooming, when the stamens release the powdery stuff. This stigma-stamen asynchrony prevents self-fertilization. On the fourth day, the flower is pulled underwater, where the seeds mature. 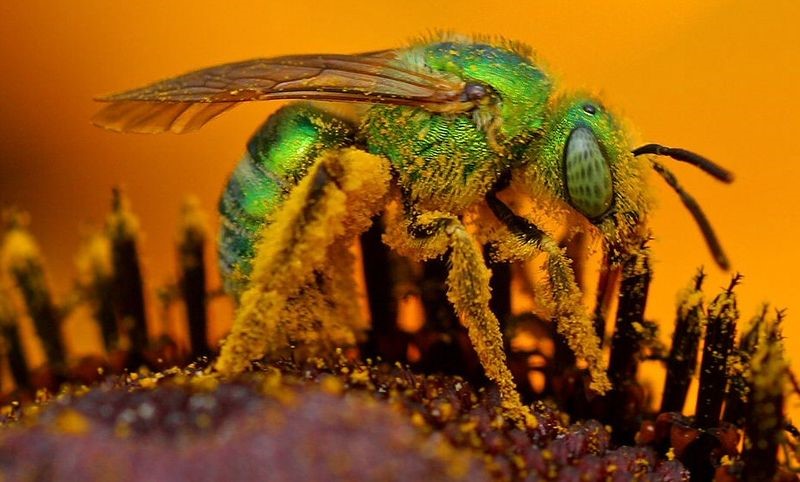 In South America, giant water lilies (Victoria spp.) take unlawful detention to another level. Their flowers attract and trap beetles until the following day, when they are allowed to leave loaded with pollen. Watch a time-lapse video of a giant water lily flower opening and closing over the course of two days. The flower opens during the receptive stigma phase, closes to entrap beetles, turns pink (pollen release phase), opens again to free its pollinators, then closes before sinking in the water.

By detaining insects temporarily, plants increase the probability of fertilization. This type of relationship is known as entrapment pollination, and molecular studies suggest this is one of the oldest pollination systems. Nymphaeales (the order consisting of water lilies and other plants) and beetles have been playing this game for approximately 90 million years. It has worked nicely for both gaolers and gaoled.