Good morning on June 2, 2022, a Thursday and National Rocky Road Day (the candy, not the ice cream flavor). Real Rocky Road looks like this: a form of fudge with nuts and marshmallow: 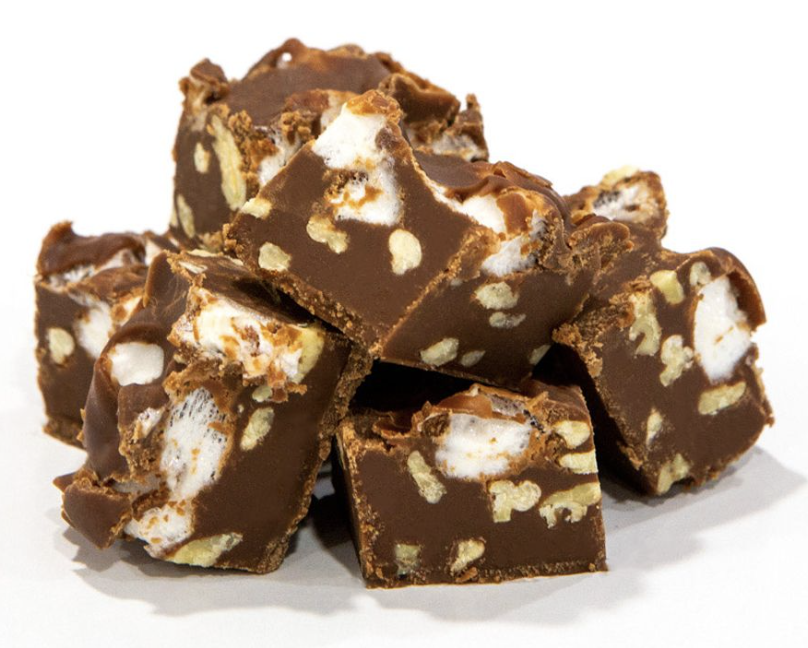 The video below from YouTube: “She’s America’s Highest Paid (Legal) Sex Worker”.  She made $1.2 million last year, but half goes to the Chicken Ranch.

Chicken Ranch in Nevada is one of the few licensed brothels in the country. It is also where Alice Little, the most successful legal sex worker in the United States works.

. . . In a candid interview, Alice talks about how her childhood was free of stigma, her 90-hour work weeks, what she will and won’t do in her job, the fetishes people come to her with, and ultimately, what she loves about her work: the connections she makes with people.

Stuff that happened on June 2 include:

Here’s an early transmitter of Marconi (he shared the Nobel Prize for Physics in 1909):

Here’s a nice BBC documentary using the words of Elizabeth:

McVeigh’s last meal before he was put to death by lethal injection was two pints of mint chocolate chip ice cream. The concept of a “last meal” has always puzzled me, but I guess it’s to afford the doomed man a last bit of pleasure.

*In an op-ed, NYT conservative columnist Ross Douthat says he has “The simplest response to school shootings.” No, it’s not more gun restrictions, nor is it arming teachers and turning schools into fortresses. Surprise! It’s. . . not selling guns to people who turn out to kill other people. That’s nothing new: it’s Mitch “666” McConnell’s and other Republican’s go-to suggestions. Detect the shooters and don’t sell them guns!

Give me policies, the simpler the better, that would stand between some meaningful percentage of mass shooters and their arsenals.

We have a decent sense of what those policies might be. The people drawn to this kind of terrorism are overwhelmingly of a type — young, troubled, socially awkward men. They are not necessarily gun experts, prepared to retrofit any weapon they acquire for maximal lethality, nor are they necessarily experts at navigating black markets to acquire weapons they can’t get legally. And they often expose their instability and intentions in advance.

Yes, some will overcome all obstacles or strike without warning. But many others, including those like the Uvalde shooter, seem potentially deterrable at the point of weapons acquisition. As the University of Alabama criminologist Adam Lankford put it, in a recent interview with The Dispatch, “If you make buying a firearm more difficult for people who find it difficult to do anything socially, that makes a difference.”

Those difference-making difficulties could be imposed via restrictions that target age and weapon type at once. Or they could be imposed through laws encouraging pre-emptive action by parties who might see the threat coming in advance.

So I would like to see experiments with age-based impediments rather than full restrictions — allowing would-be gun purchasers 25 and under the same rights of ownership as 40- or 60-year-olds, but with more substantial screenings before a purchase. Not just a criminal-background check, in other words, but some kind of basic social or psychological screening, combining a mental-health check, a social-media audit and testimonials from two competent adults — all subject to the same appeals process as a well-designed red-flag law.

Well, yes, we should tighten background checks, which include vetting people with a history of mental illness, and not sell AR-15s to those under 21, and giving people psychological tests, but is this really going to be a Big Fix? Remember, most deaths by guns are not by mass shootings, but by individual homicides and suicides. Are those people going to stand out in a psychological test (it’ll be too much trouble to implement that, anyway) ? Douthat’s solution is better than nothing, but given the nature of gun violence, it appears to be targeted towards a minority of those who kill or hurt others. I still think we need to pry the guns out of the hands of Americans who love them. No tests needed!

*The jury hearing the joint defamation suits of Johnny Depp and Amber Heard has found BOTH OF THEM liable.  The net result is that Depp got more money—$13 million dollars of it:

Weighing the claims, a jury found that both of the exes defamed each other.

Heard kept her eyes down as the verdict was read. Depp was not present in court.

Heard said in a statement she is “heartbroken” over the verdict.

And that, ladies and gentlement, brothers and sisters, comrades and friends is that. Except for a completely useless NYT op-ed by Jessica Bennett, “Nobody wins in the Depp-Heard Verdict.”

*WaPo national affairs columnist David von Drehle has a heterodox opinion just expressed in his piece, “Think the West can coax an end to the war in Ukraine? You’re wrong.” In other words, sanctions aren’t going to work. Only Putin, and Putin alone, can end the war.

Now, only he can stop this horror. Weirdly, though, leaders and thinkers of various political stripes seem to think that the United States and its allies have the power to bring the carnage to an end. From Henry A. Kissinger on the right to Katrina vanden Heuvel (a Post columnist) on the left to Sen. Rand Paul (R-Ky.) in cloud-cuckooland, these voices have complained in recent days that Ukrainian resistance, supported by the allies, somehow stands in the way of a cease-fire.

From the first week of the fighting, Ukrainian President Volodymyr Zelensky has repeatedly offered the most generous cease-fire terms to Russia, consistent with restoring a stable, peaceful world. Even after kicking Russian tails for more than three weeks, Zelensky asked only that Russia return to its pre-invasion position and commit to respect Ukrainian sovereignty. Ukraine would pause its integration into Western Europe somewhere short of full NATO membership.

. . .  Putin doesn’t want peace. He has gone to extraordinary lengths to avoid peace. He has paid — and continues to pay — a staggering price to resist peace. Even as his military power melts and his economy reels, Putin spurns cease-fire talks. Diplomats have begged him to negotiate, yet he has never engaged seriously.

. . Putin will end the war only when he decides he has no other choice. Therefore, Ukraine must fight on.

*Sheryl Sandberg, whom I’ve always had a crush on, just announced that she’s leaving Facebook  and has nothing lined up that lured her away. It appears to be the FB controversies:

Sheryl Sandberg, the chief operating officer of Facebook, has announced she will step down from her role, as the company continues to weather a financial storm and shifts away from social media into virtual reality.

Sandberg said she was not sure of what the future holds for her, but she plans to focus on her foundation and philanthropic work going forward.

She said she will leave the company this fall, but will continue to be on Meta’s board.

The billionaire executive has been one of Facebook’s most prominent public faces since joining in 2008, shaping its policies and overseeing responses to the myriad public controversies the company has battled.

Her departure comes after Facebook rebranded in October 2021 to Meta, attempting to move its primary business away from social media and into virtual reality after a series of difficult years. CEO Mark Zuckerberg has bet big on his hopes for the “metaverse”, an augmented and virtual reality space where people can interact through avatars in a shared world.

On the lighter side, there’s some good news for Brits. For some reason that isn’t clear, the Binley Mega Chippy in Coventry has acquired the reputation as a fantastic fish and chips shop, and is being flooded with customers.

Visitors appear to have been drawn to the fast food restaurant by a catchy music video posted on TikTok, which has now been viewed more than half a million times.

“I have no idea what happened,” said Kamal Gandhi, the shop’s owner. “Thursday it started to get busy, and I noticed people out the front taking pictures. I was just like, ‘What are people doing?’ We assume someone local who likes the food has made the song and it’s just gone viral.”

The song was just the start. It has spawned Binley Mega Chippy remixes and reviews, with a particular focus on the eatery’s £4.99 “Morbius Meal”. This consists of fish and chips, mushy peas and a can of fizzy drink.

By Monday morning there were people queueing outside the shop before it opened and many others, mainly teenagers, posing for photos underneath its striking red and yellow sign.

The one missing element from this story is the answer to the burning question: DOES THE PLACE MAKE GOOD FISH AND CHIPS? There no meal more comforting to me that a good “Morbius-style meal” with fresh, crispy fried fish, tons of fries, the requisite mushy peas, and a pint or two of Landlord on the side. So does this place fill the bill? Sadly, we’re not told.  Perhaps a kind reader in the Midlands will send a report (h/t Jez)

This plate is getting there, but needs more chips: 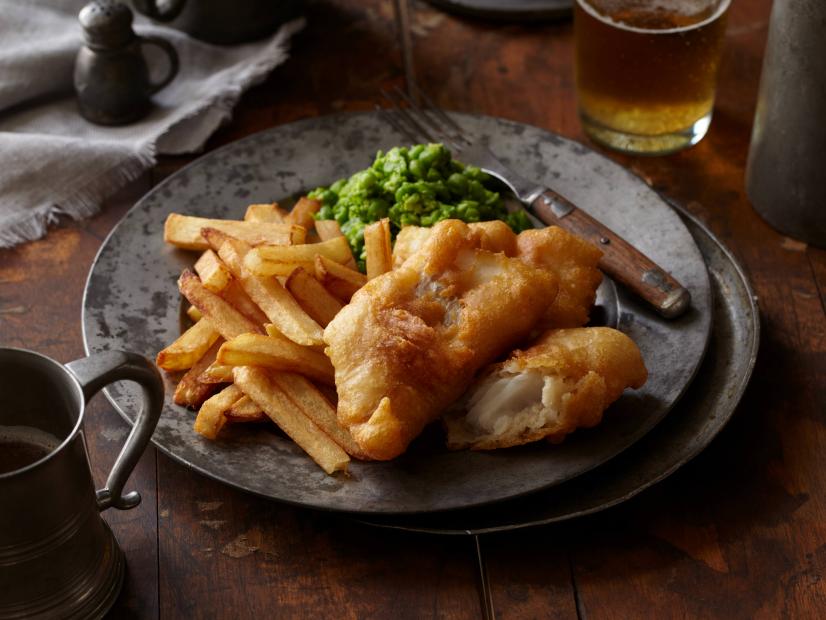 Meanwhile in Dobrzyn, Hili is looking for “inspiration,” but she may mean “mice”!

A: What are you looking for?
Hili: Inspiration.
A: Under a bush?
Hili: It must be somewhere. 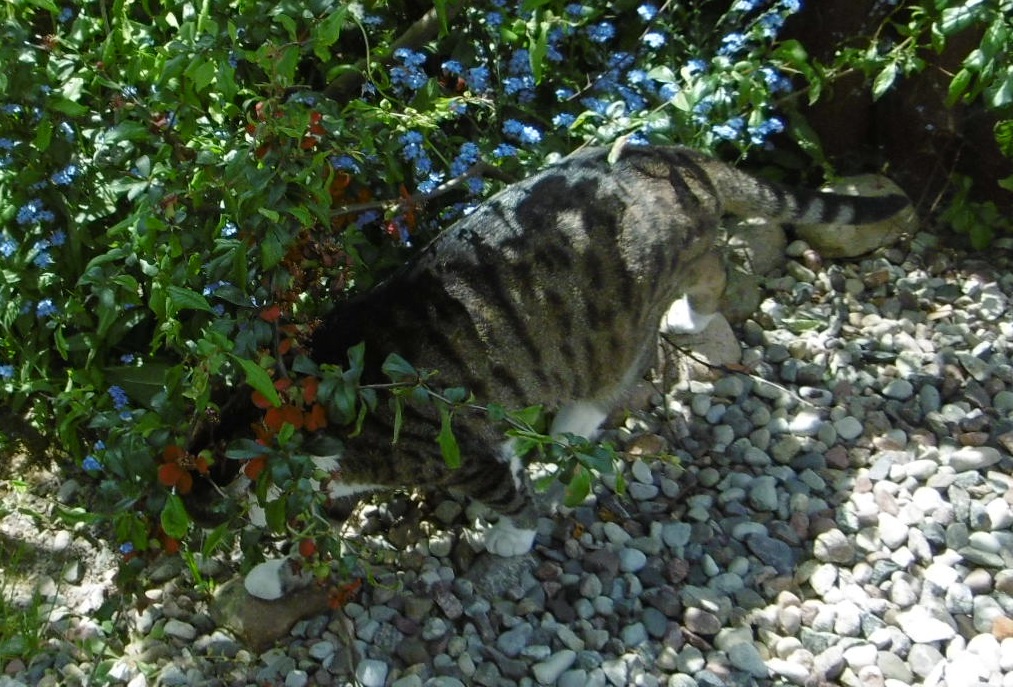 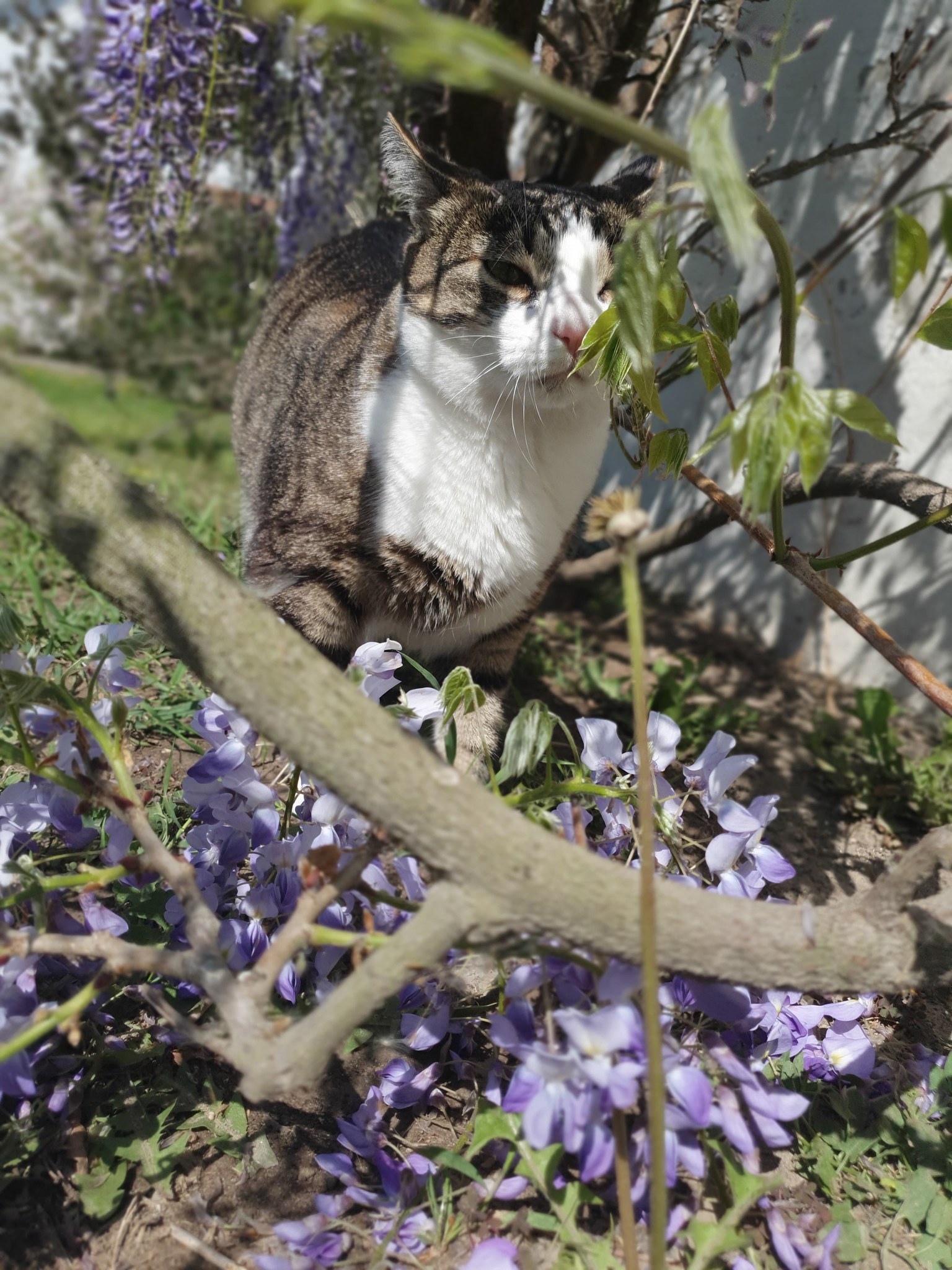 And from Manchester, we have a picture of Matthew’s cat Pepper in the garden: 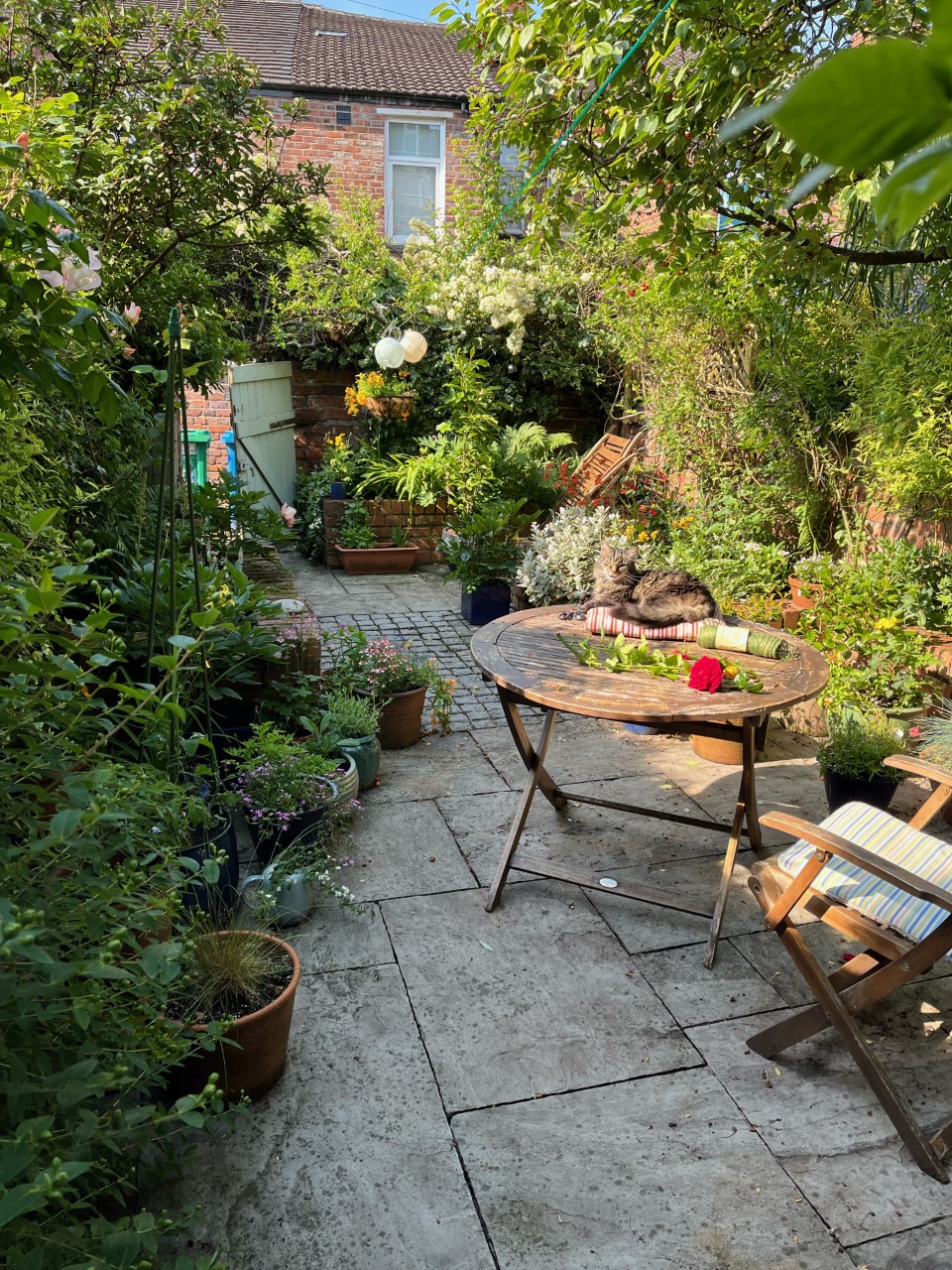 From Simon, drawing a distinction between “macaroon” and “macaron”—and other things: 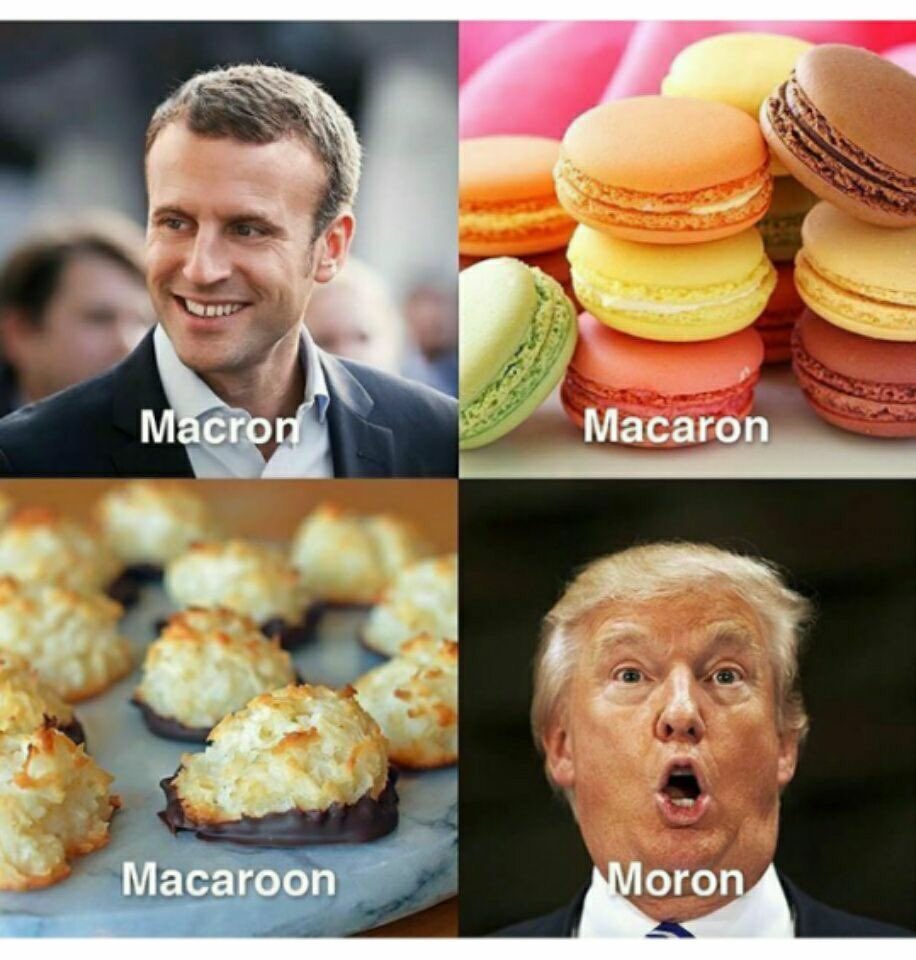 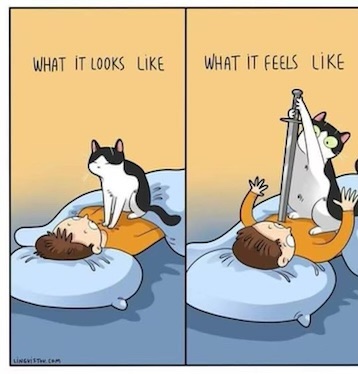 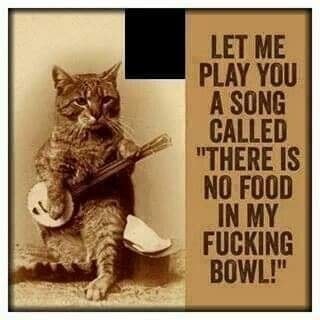 From Barry: a cat gets dizzy!

Another from Ginger K:

NSF GRFP Reviewers are very explicitly told in the NSF's guidelines *not* to mention GPA/# of publications/etc, and instead focus on the overall application in a *holistic* review process.

Who'd have thought academics would rely so much on lazy, flawed proxies to evaluate others

In November 1943 he was deported to #Auschwitz and murdered in a gas chamber. pic.twitter.com/kO46LJ27kL

Tweets from Matthew. His caption to the one below: “Impervious to facts”. Indeed!

At the NRA Convention someone told us that hammers are used to kill more people than guns. So we looked up the stats in front of them. pic.twitter.com/ju5R8Pqbvk

Matthew says, “These kids are now my age”:

I have found this frankly wonderful archive of a Northern Ireland primary #school disco in the 1960s while working on a report and it might be the best thing I’ve ever seen. pic.twitter.com/BrQP5lehe0

Matthew tweeted this, and I’m mystified by that last sentence.  An example of “taking with one hand and giving with the other”.

Yikes! The final paragraph of Donald Fleming’s review of Olby’s The Path to the Double Helix, in @TheTLS in 1976. pic.twitter.com/DmW6806M6c

A letter from crystallographer and polymath J. D. Bernal (nicknamed “Sage”) to J. D. Watson congratulating him and Crick for their role in discovering the DNA structure:

Lovely letter from Bernal to Watson, on the occasion of the 1962 Nobel Prize for DNA structure. pic.twitter.com/q9ksbgcLa3