After every mass shooting—and mass shootings constitute only 1.2% of all American deaths due to gun violence—we experience a brief period of self-awareness and self-assessment, and then discourse gets back to normal. Everyone jaws for a week about the solutions (some even offer them),but in the end the status quo is back with us. This is exemplified in a story from The Onion, appearing after the Las Vegas massacre (click on screenshot to read); it’s one of the best pieces the sarcastic site ever produced.

First, though, let’s recognize, as I noted above, that mass shootings are but a small fraction of all gun-related deaths. What we most need to deal with are not the attention-grabbing mass shootings, but the much larger number of homicides, suicides, and accidental gun deaths.  The Pew Research Center reports that in 2020, 45,222 died in gun-related incidents in the U.S.  Depending on your definition of “mass shooting”, those killed in mass-shooting incidents range from 38 to 513: 0.08% to 1.1% of all deaths. (I’m not trying to minimize the psychological effect and grief caused by mass shootings, of course, but trying to emphasize that if you want to save lives, these events are a smaller part of the problem than most people think.)

This figure from Nicholas Kristof’s new and illustrated op-ed in the NYT, “How to reduce shootings,” gives an overview of the problem: 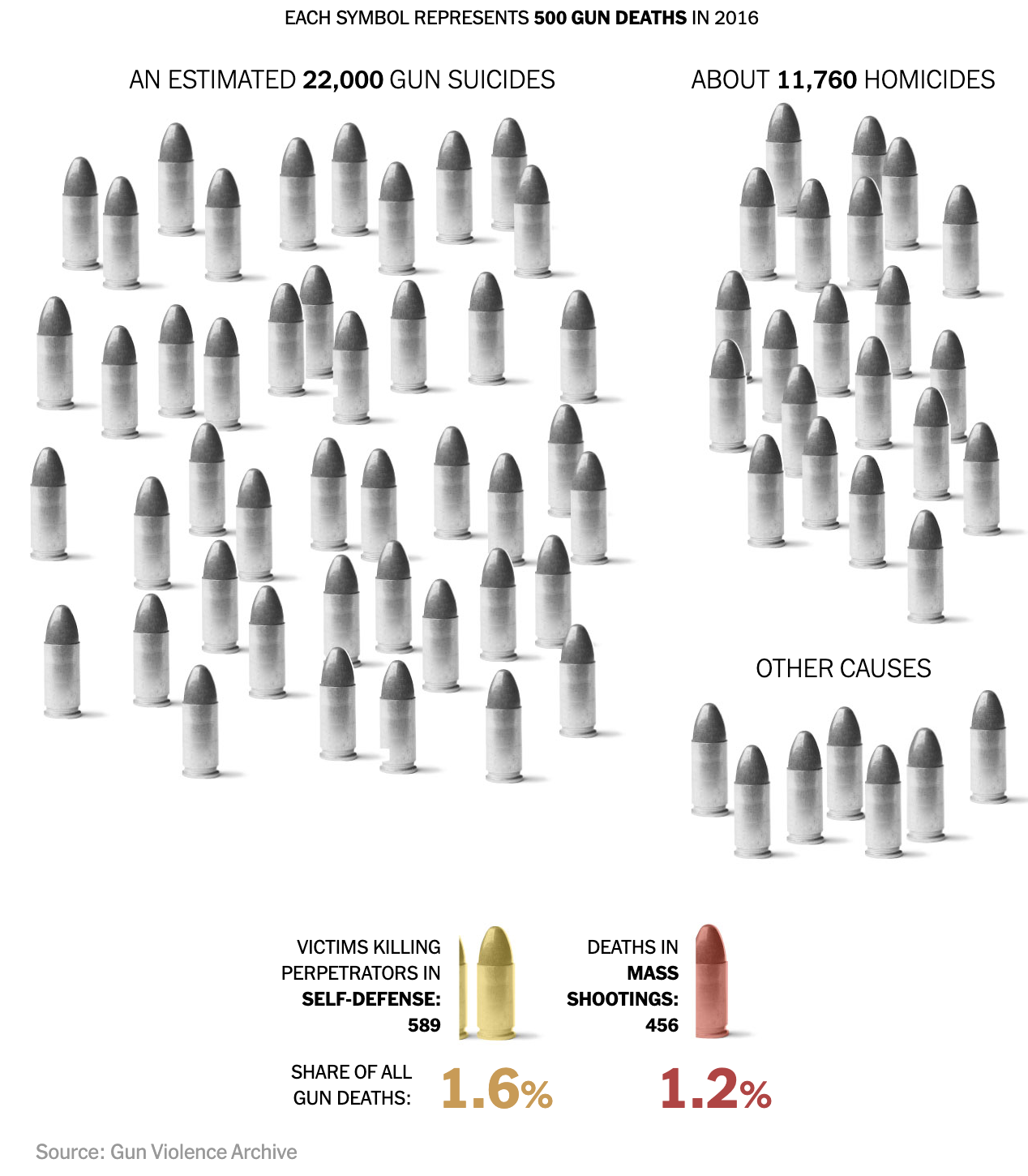 This shows several things, the most striking being that the NRA and other gun owners’ justification for having guns (protecting yourself from bad guys) is unjustified: only 589 killed others in justified self-defense compared to 11,760 homicides (I assume the latter don’t include “mass shootings” but are one-off events, including accidents.)

Further, death by suicide is by far the largest form of gun-related mortality. I will assume that if guns weren’t easily available, this number would drop. (Shooting is the easiest, most reliable, and one of the least messy ways of doing yourself in. That’s why it’s the go-to way of killing yourself.)

It’s hard not to conclude that the lax gun laws of America are largely responsible for the death rate. You can say that we have more “bad guys,” and it’s the people who kill, not the guns (viz., the NRA), but then how does that explain our huge number of suicides? Only easy access to guns (or a special incidence of mental illness in America) explains that.

Here are some figures included in Kristof’s piece (illustrations are by Bill Marsh: 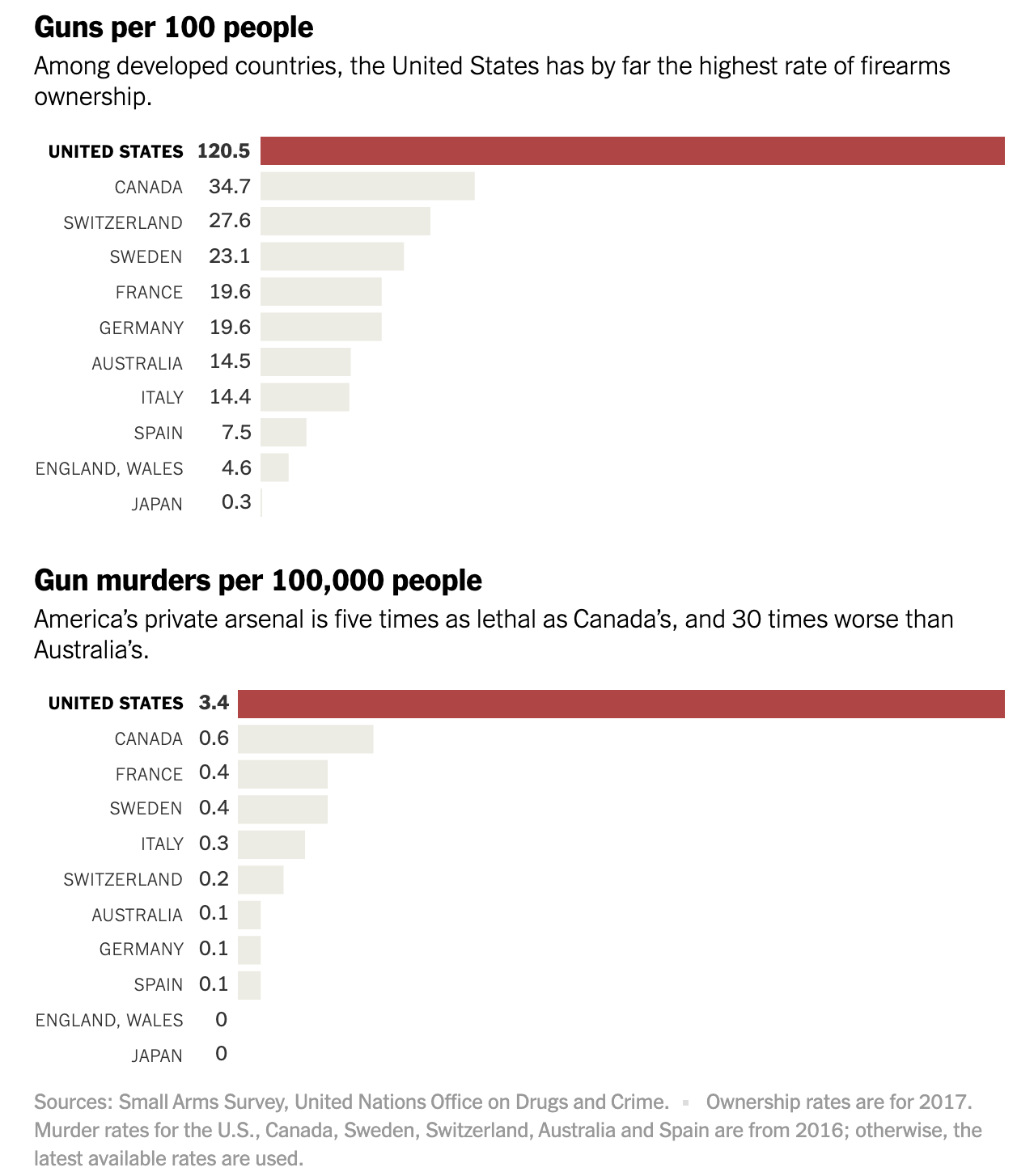 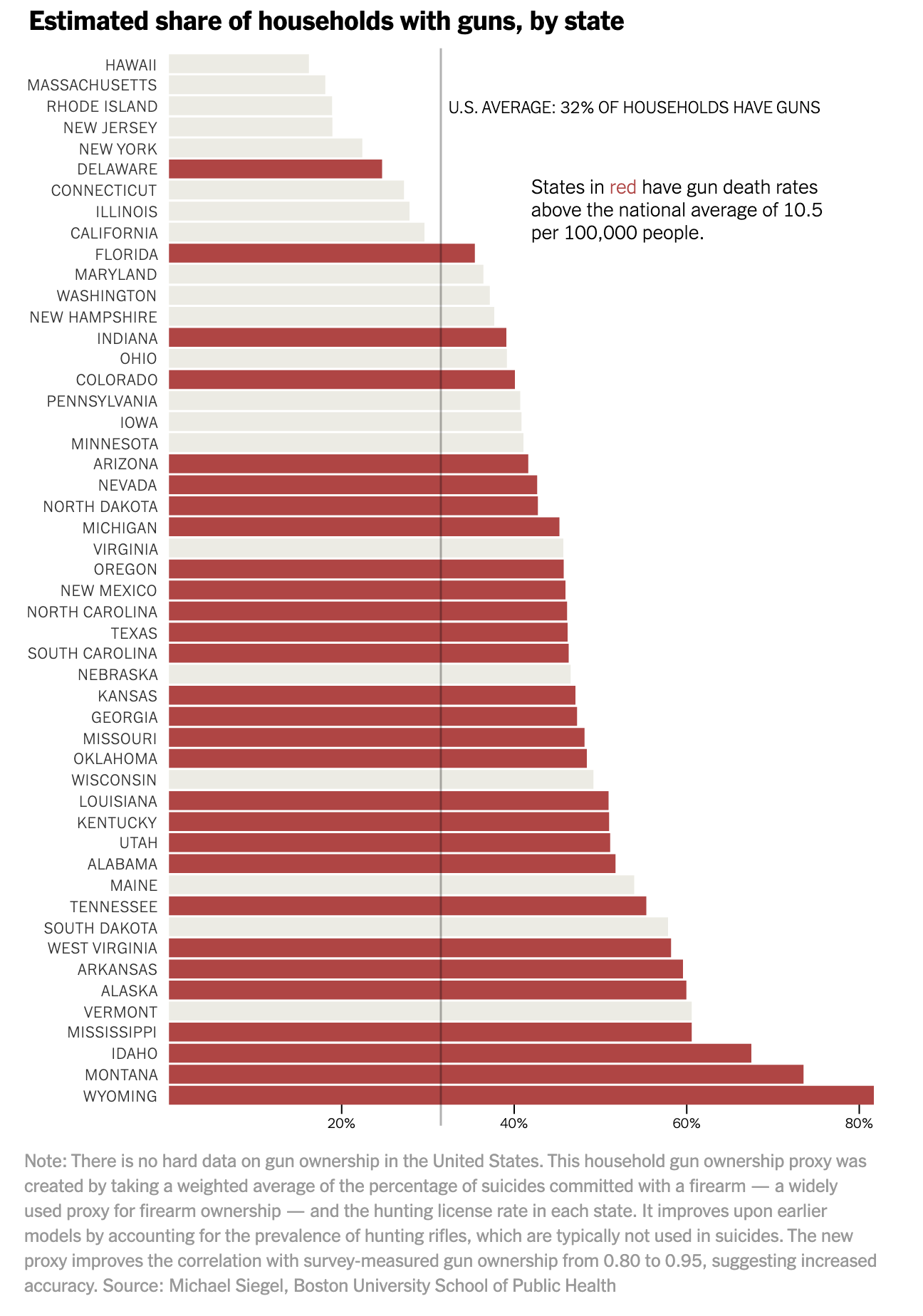 Further, there’s a positive correlation among states between the laxity of gun laws and per capita gun deaths: 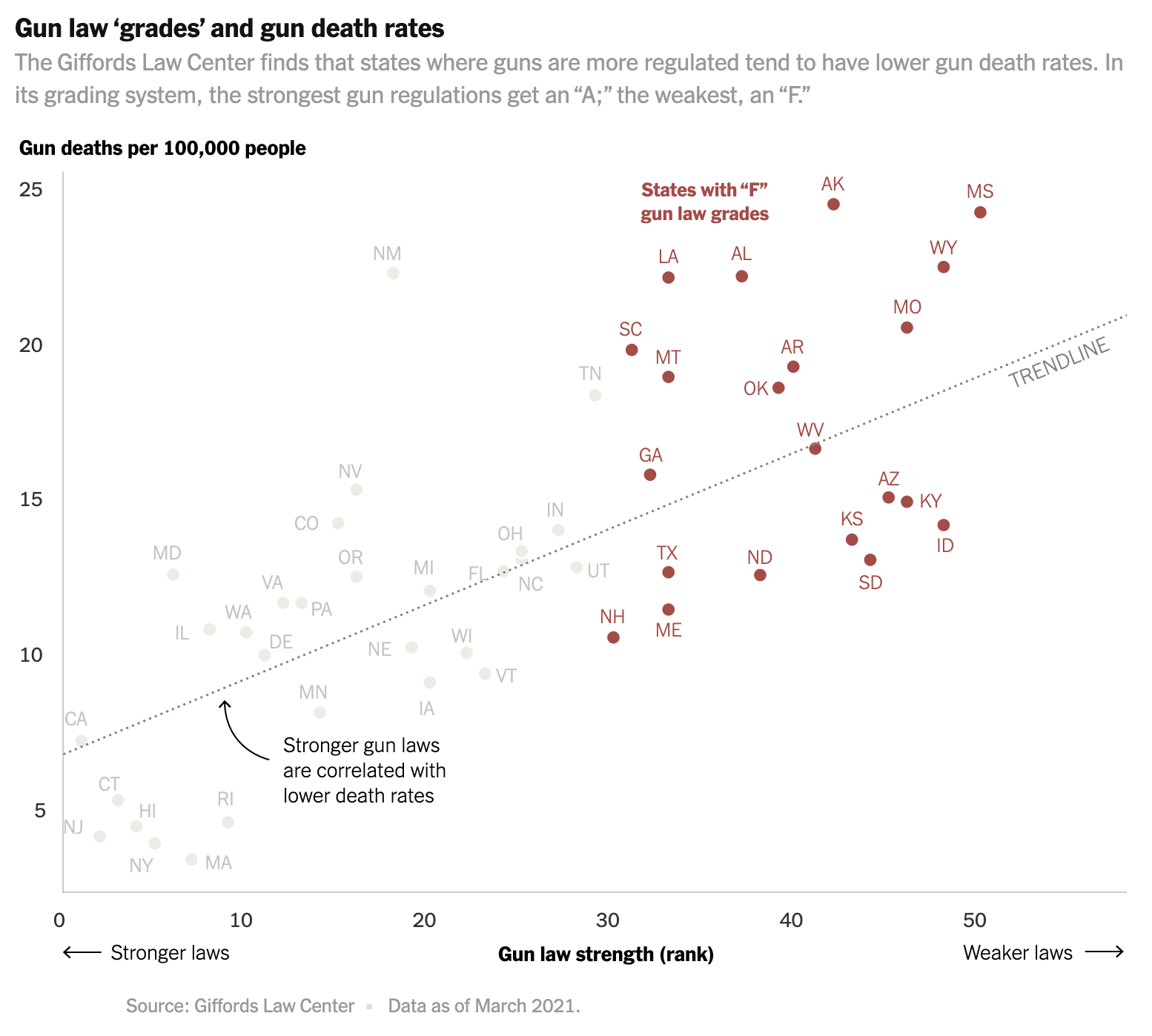 This is a correlation, of course, not necessarily a causation, but the correlation is strong, and one would have to posit that sociological factors in states like Kansas and Idaho (more bad people per capita, for example), are the factor producing this. As Kristof notes,

Some of you will protest that the immediate aftermath of a shooting is too soon to talk about guns, or that it is disrespectful to the dead to use such a tragedy to score political points. Yet more Americans have died from gun violence, including suicides, since 1970 (about 1.4 million) than in all the wars in American history going back to the Revolutionary War (about 1.3 million). And it’s not just gang-members: In a typical year, more pre-schoolers are shot dead in America (about 75) than police officers are.

He adds that another factor supportsthe ubiquity of guns as causal here:

For skeptics who think that gun laws don’t make a difference, consider what happened in two states, Missouri and Connecticut. In 1995, Connecticut tightened licensing laws, while in 2007 Missouri eased gun laws.

Granted, this is an anecdote, but it’s surely worth following up. (To do that, of course, we need more states loosening as well as tightening gun laws.)

Presumably because of the futility of trying to enact gun-control legislation in the U.S. (even though most Americans favor some kind of gun control), Kristof instead floats a “public health” approach: controlling not the number of guns, but who gets to buy a gun. That, of course, would be helpful, but a lot of deaths come from shootings by sane people in bad situations or accidental shootings by children and the like. And plenty of suicides have no formal record of mental illness that would bar them from owning a gun—even if such laws were widespread.

Gun enthusiasts often protest: Cars kill about as many people as guns, and we don’t ban them! No, but automobiles are actually a model for the public health approach I’m suggesting.

We don’t ban cars, but we work hard to regulate them — and limit access to them — so as to reduce the death toll they cause. This has been spectacularly successful, reducing the death rate per 100 million miles driven to less than one-seventh of what it was in 1946.

Kristof then gives a list of the kind of regulations that reduced automobile deaths (seat belts, child safety seats, car safety ratings, etc.). And yes, they worked, but we own cars because we need them. Except for the army and police, Americans don’t need guns—except perhaps in the case of farmers or those who insist on target practice. (Even then, guns can be kept in lockers at the shooting sites.)

My solution, were I King of the U.S. (god help you if that were to occur!) would be to start by adhering to the UK model of gun control, where pistols and automatic weapons are banned, and both guns and ammunition must be licensed by the police before you can have them. (I’d go even farther, but we won’t get into that). How many people really need a gun as opposed to those who really need a car?

b.) The liberal approach is ineffective. Use a public health approach instead.  By this Kristof euphemistically says “gun safety” rather than “gun control” since the latter sounds more draconian. Here are his suggestions:

These are useful changes, of course, but won’t do much about suicides, and I wonder how much they’ll reduce homicides as opposed to implementing draconian laws against gun ownership. In Kristof’s favor, however, is the palpable fact that most Americans do favor tightening gun restrictions: 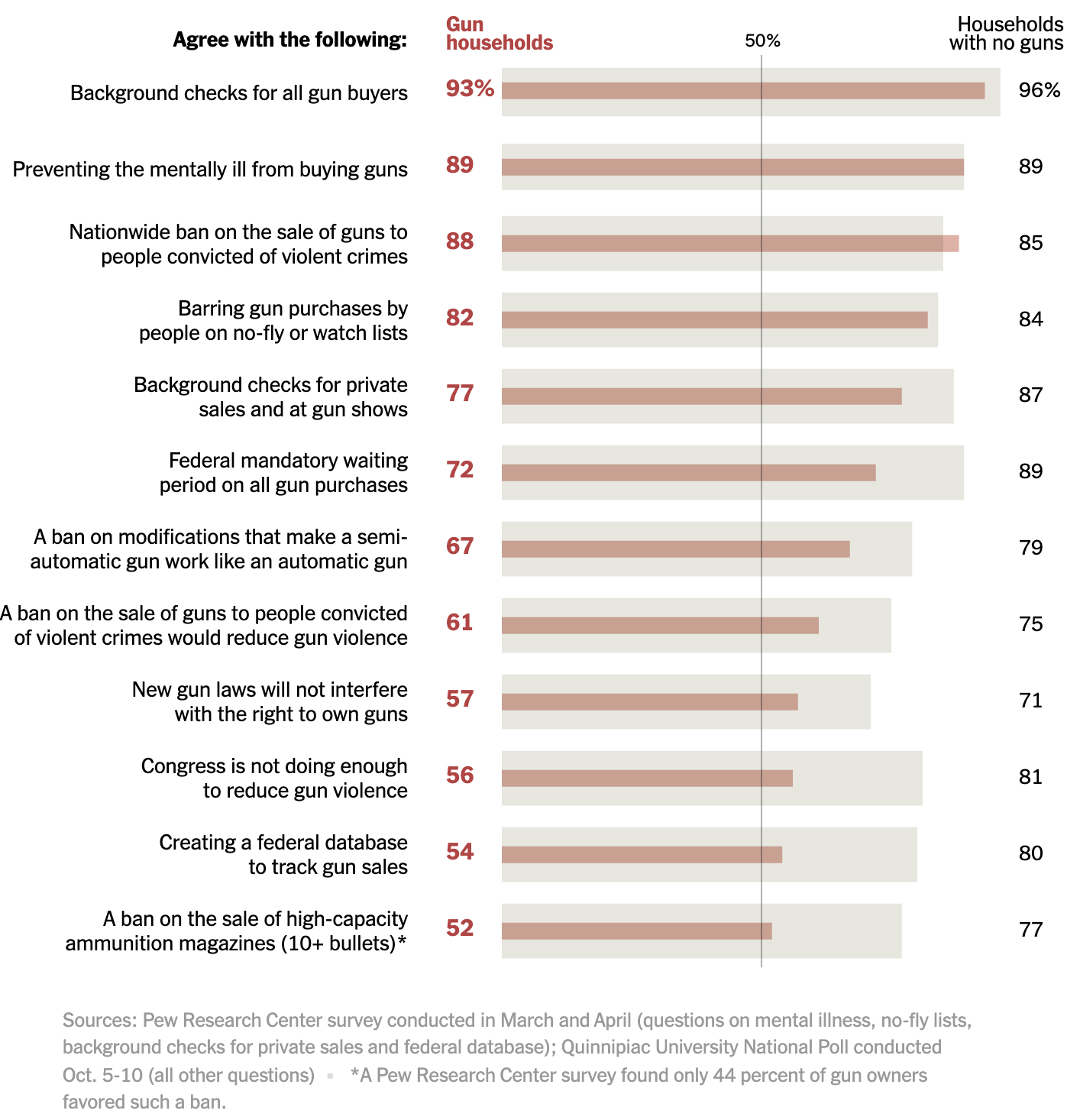 Note that although gun owners tend to be a bit laxer on these bans and stipulations, more than 50% still favor them. And yes, those bans have been enacted in some states. But remember that the 18-year-old who committed yesterday’s Texas school slaughter bought his gun(s) legally.

c.) Better training about using guns. Training about how to store guns and ammo will surely reduce gun deaths, particularly those caused when kids get hold of guns. But somehow this “better education” plan sounds ineffectual. For one thing, it does nothing to prevent suicides. And the general problem with training, as Kristof points out, is that a very high percentage of safety trainers both encourage gun ownership and gun carrying, as well as encouraging people to join “gun rights groups.”

There’s no doubt that implementing most of Kristof’s suggestions will reduce deaths, and even reducing one death is a good. But even as a package they seem to me a suboptimal way to solve the problem.The best way is, as I’ve suggested, going to a draconian gun-ownership system like the UK’s. You’ll tell me that’s impossible, and you’re probably right. (One can dream, however.) But solutions that have been offered only nibble away at the problem, and will still leave us near the top of all countries in gun-related deaths. Once again, Kristof says that if we can make cars safe, we can make guns safer;

But automobiles are a reminder that we can chip away at a large problem through a public health approach: Just as auto safety improvements have left us far better off, it seems plausible to some gun policy experts that a sensible, politically feasible set of public health steps could over time reduce firearm deaths in America by one-third — or more than 10,000 lives saved each year.

He seems to forget that we have no automobile equivalent of the NRA. There is no anti-car-safety lobby.

Bari Weiss’s solution, on the other hand, while also involving stricter gun laws and restrictions on gun proliferation, involves fixing a broken and divided America (click to read, but subscribe if you do that often):

Her plaint—and she’s right—is that we’ve “normalized” violence. The fact that each mass shooting evokes but a temporary outcry (while the much larger number of gun deaths continues unremarked) is an argument against Kristof’s solutions, since what’s the impetus to do anything if we accept shootings as a regular part of life? She advocates a Kumbaya solution: reducing divisiveness reduces deaths. Given that most deaths are single-person homicides or suicides, I’m not sure how that will work, and at any rate seems just as hard (if not harder) than tightening gun laws.

You don’t need another writer telling you what you already know: that mentally ill people getting their hands on guns to commit mass murder this easily is deranged and wrong. Accepting this as normal has nothing to do with respecting the Second Amendment. You don’t need another writer pointing out that this doesn’t really happen in other places and maybe the fact that America has more guns than any other nation on Earth has something to do with it. There’s nothing well-regulated about Salvador Ramos, though it appears he bought those assault rifles legally on his 18th birthday. There’s simply no world in which our founders would look at inner-city gun violence and these sick teenagers in suburban schools and say this was their intention.

Gun rights activists will argue that other countries have guns and that murderers don’t need guns to kill and that some of the cities and states with the strictest gun laws in the country have the highest rates of violent crime and that people kill people guns don’t kill people and that anyway good guys with guns kill bad guys with guns. (Uvalde police officers and a school resource officer reportedly fired at the shooter. They couldn’t stop him.)

Here’s where I think they are right, if inadvertently: The social rot that’s come over America, the nihilism and hatred of each other, is part of the cause here. The dissolution of our social ties—and with them the accountability and responsibility that an actual community demands—has allowed insanity to fester unnoticed. Lockdowns accelerated the isolation, the purposelessness, the lack of meaning that was already overcoming us.

If we insist on viewing this shooting as part of some isolated issue or species of violence, then we miss the point. The point is the country is being consumed by what Philip Roth famously called “the indigenous American berserk.” It stretches back many decades, or longer, and for ages, it was possible to ignore or compartmentalize. Now the brokenness is everywhere we look and it is impossible to unsee it.

I’m not sure what “the indigenous American berserk” is, and the lockdown will eventually abate. But Weiss offers no other solution to the “dissolution of our social ties” problem, and I can’t think of one.

The one step to reduce these deaths that is at least feasible (but nearly impossible) is to ban the goddam guns. And yes, I know that won’t happen, so you don’t need to tell me. But at least that can be implemented with a few strokes of the pen. Fixing “indigenous American berserk,” well, how do you do that?

Or, as Matthew suggested to me this morning, I could leave America. But that doesn’t solve the problem except for me, and I’m in no great danger anyway.

151 thoughts on “Two ways of looking at gun violence”