While perusing a recent issue of Science, I came upon a review of the book below (access is free, click on book to see Amazon link); the review is called “Rethinking the ‘Western’ revolution in science” and was written by Jorge Cañizares-Esguerra, a Professor of History at the University of Texas at Austin.  Poskett, the book’s author, is an Associate Professor in the History of Science and Technology at the University of Warwick. 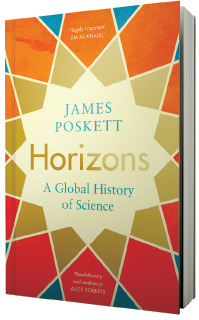 The point of Poskett’s book, which I haven’t yet read, is apparently to show that science began as an international enterprise, with nascent science developing in many places, and that the “Eurocentric view” that science is solely a Western phenomenon is misguided. Fine; I agree, although I have to say that “modern” science since the 18th century is almost wholly a product of what we call “the West.” Science started and was conducted elsewhere, but often died out (as with the Greeks), or was abandoned (as in Islamic nations). In contrast, it’s been was a more or less continuous enterprise in the “West” since about 1600.  There’s no doubt that earlier influences played a big role, and of course people from all over the world have made huge contributions to science, but many of them did so after being trained in the West or influenced by “Western science.”

But I don’t want to argue about this; I’m fine with admitting that science began as an international enterprise. What I’m not fine with admitting is the distortions that Jorge Cañizares-Esguerra engages in to show that Western science was not only not dominant, but resulted from with all kinds of bigotry, hatred, and perfidious acts. This includes Newtonian physics and, yes, evolutionary biology. Here are two paragraphs from Cañizares-Esguerra’s review. Remember, I’m not reviewing the book, but pointing out tendentious and misleading statements by the reviewer. I have no idea whether Poskett himself would agree:

Similarly, Poskett demonstrates how all the key evidence Isaac Newton relied on to revitalize physics came from comparative studies conducted in equatorial and Arctic locations. To reach isolated islands in the Pacific to obtain such data, nations needed considerable seafaring capabilities. Ultimately, Poskett argues, it was the Atlantic slave trade that made the accumulation of evidence for Newtonian physics possible.

All the key evidence? Here, the reviewer leans over backwards to connect Newton and his physics to the slave trade. Is this convincing? Not from what I read, for “considerable seafaring capabilities” were already well developed well before the Atlantic slave trade, and I can’t envision a case whereby the slave trade so greatly improved navigational skills so that these skills gave rise to “all the key evidence Isaac Newton relied on to revitalize physics”. Optics? Gravity? Well, I’m sure there are people out there who could cobble together such a case, but it would be a stretch. And the dragging in of slavery seems, well, a bit gratuitous.

And then Cañizares-Esguerra comes to evolution:

According to Poskett, 19th-century industrialization, nationalism, settler colonialism, and imperialism drove the development of evolutionary biology, particularly Darwinian natural selection. The idea of evolution as the survival of the fittest was a trope that informed the development of national armies and frontier societies. Nineteenth-century Argentina, Russia, Japan, and China, he notes, excelled in paleontology and evolutionary biology.

My first response to this entire quote is “it’s not even wrong,” but I’ll try to be charitable.  It is just possible that capitalism (but not war) can be seen as part of the Zeitgeist that inspired Wallace and Darwin to come up with the view of natural selection, though Darwin’s own explanation involved reading Malthus, not pondering factories and clashing armies. But that could just be a coincidence: a correlation rather than a causation.  I don’t know about paleontology, but it’s not my understanding of the field that Russia, Japan, China, and Argentina “excelled in evolutionary biology” in the nineteenth century.  National armies and frontier societies? Well, you won’t find that in Darwin’s own work, but perhaps he didn’t recognize his own influences.

This all reminds me of the frequent claim that “Hitler was a Darwinian”: a reverse claim that Darwin’s work on “survival of the fittest” inspired Hitler in his genocidal and imperialistic acts. In fact, though that was also “a trope,” it’s a misguided trope, as my colleague Robert Richards pointed out in his long essay, “Was Hitler a Darwinian?” (The answer is “Nope!”).  That essay is free online. What it shows is that a temporal succession of two people whose work involved “competition” (Darwin and then Hitler) does not show that the former influenced the latter.

The drive to discredit science, and “Western” science, by connecting them to acts of immorality will continue, as will the denigration of Darwin as just one more feet-of-clay idol who needs to be toppled. It’s easy to draw connections between science and nearly every other societal development, but making a strong case that the latter influenced the former often leads to tendentious  and inflammatory speculation meant to do down science.

41 thoughts on “Wonky science quotes of the week”