I had no idea that there was a big black hole at the center of the Milky Way, but that is indeed the case, though it seems to have been discovered not that long ago and photographed just now, as documented in the Event Horizon site below (click on screenshot).

The hole, called Sagittarius A* (or SgrA*) was discovered when several stars were orbiting around an invisible spot in the galaxy. Although black holes are themselves invisible, they can be visualized because they’re surrounded by a ring of glowing gas. The website Event Horizon Telescope (which is the group that visualized it and the first black hole) describes the finding and shows the photos, which are, after all, what we want to see. Producing them was itself a remarkable feat, as described below.  Click on the screenshot below to read:

Although we cannot see the black hole itself, because it is completely dark, glowing gas around it reveals a telltale signature: a dark central region (called a “shadow”) surrounded by a bright ring-like structure. The new view captures light bent by the powerful gravity of the black hole, which is four million times more massive than our Sun.

“We were stunned by how well the size of the ring agreed with predictions from Einstein’s Theory of General Relativity,” said EHT Project Scientist Geoffrey Bower from the Institute of Astronomy and Astrophysics, Academia Sinica, Taipei. “These unprecedented observations have greatly improved our understanding of what happens at the very centre of our galaxy, and offer new insights on how these giant black holes interact with their surroundings.” The EHT team’s results are being published today in a special issue of The Astrophysical Journal Letters..

Because the black hole is about 27,000 light-years away from Earth, it appears to us to have about the same size in the sky as a donut on the Moon. To image it, the team created the powerful EHT, which linked together eight existing radio observatories across the planet to form a single “Earth-sized” virtual telescope [1]. The EHT observed Sgr A* on multiple nights, collecting data for many hours in a row, similar to using a long exposure time on a camera.

Here you go. The site also shows, visually, how different images were averaged and combined to create this “definitive” photo (click photos to enlarge them):

You may remember that 3 years ago first image of a black hole, M87*, was released. That one, called M87*, sits at the centre of the more distant Messier 87 galaxy, and is a much larger hole—a thousand times the size of SgrA*. Here’s a picture of that “first” black hole from the NYT, with the newly added visualization of polarized light. 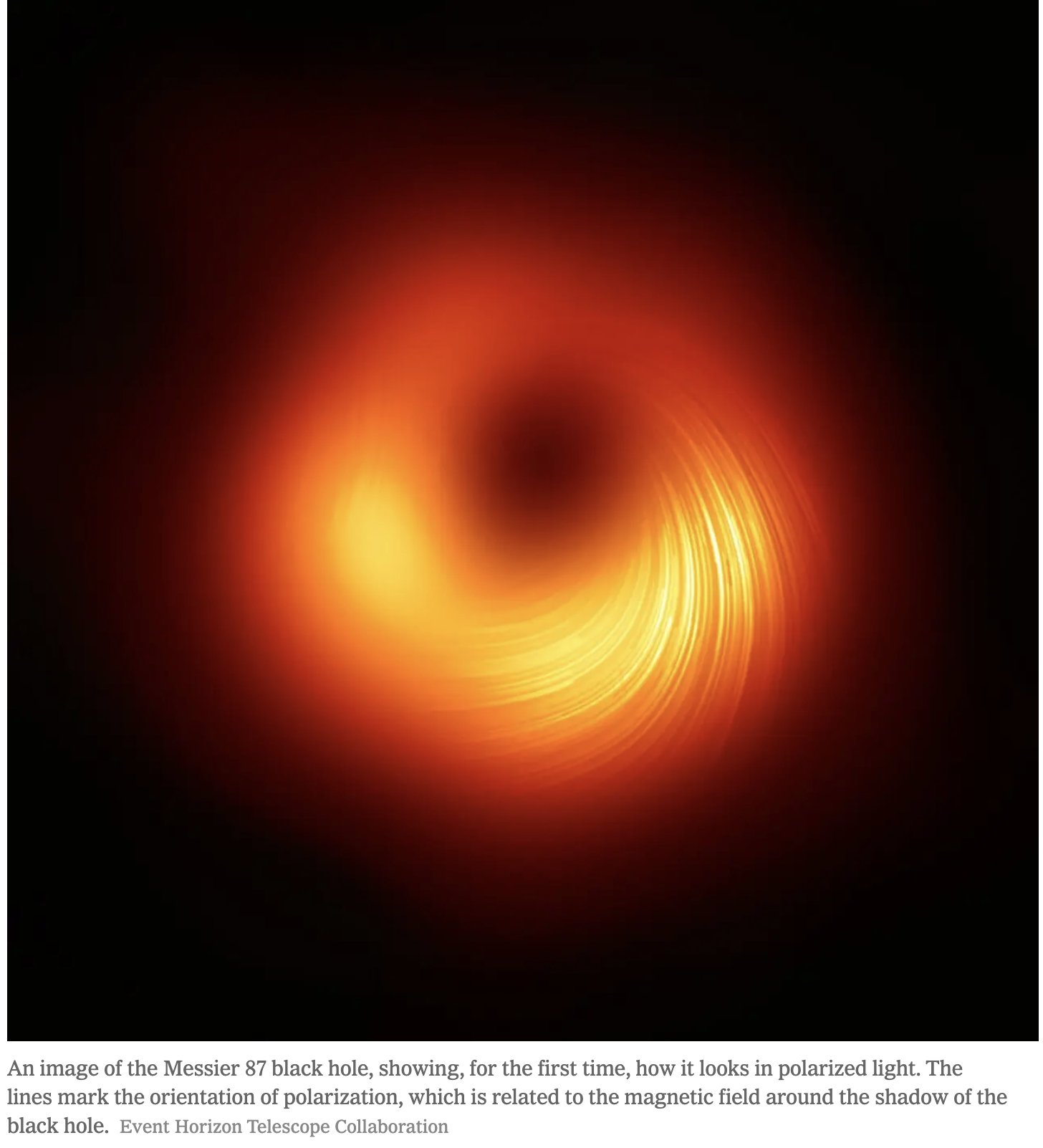 More from the site:

The two black holes look remarkably similar, even though our galaxy’s black hole is more than a thousand times smaller and less massive than M87* [2]. “We have two completely different types of galaxies and two very different black hole masses, but close to the edge of these black holes they look amazingly similar,” says Sera Markoff, Co-Chair of the EHT Science Council and a professor of theoretical astrophysics at the University of Amsterdam, the Netherlands. “This tells us that General Relativity governs these objects up close, and any differences we see further away must be due to differences in the material that surrounds the black holes.”

. . . . The effort was made possible through the ingenuity of more than 300 researchers from 80 institutes around the world that together make up the EHT Collaboration. In addition to developing complex tools to overcome the challenges of imaging Sgr A*, the team worked rigorously for five years, using supercomputers to combine and analyse their data, all while compiling an unprecedented library of simulated black holes to compare with the observations.

Scientists are particularly excited to finally have images of two black holes of very different sizes, which offers the opportunity to understand how they compare and contrast. They have also begun to use the new data to test theories and models of how gas behaves around supermassive black holes. This process is not yet fully understood but is thought to play a key role in shaping the formation and evolution of galaxies.

So there you go. I consider the prediction and then verification that these bizarre entities exist to be of the triumphs of the human mind. The theory began as an outgrowth of Einstein’s General Theory of Relativity, and required the work of many people. Ultimately, Stephen Hawking and Roger Penrose gave the definitive proof that black holes were a natural result of Einstein’s theory. Then they were “photographed” using radioastronomy. For his theoretical work, Penrose won half of the 2020 Physics Prize, but Hawking was dead by then or almost surely would have shared the Prize.

A special day for me: >22 years ago I thought we could perhaps see the supermassive black hole in the Milky Way with an earth-sized radio telescope. We calculated its appearance, colored it orange/red, coined the term 'shadow', published it, & now we see!https://t.co/7W4tfD9Pu0 pic.twitter.com/fnJSZHEYah

39 thoughts on “Another black hole visualized, this one at the heart of our own galaxy”