In today’s NYT you can find the op-ed below (click on screenshot to read), a defense of overturning Roe v. Wade written by Matthew Walther. As you can see by the subtitle, Walther is editor of the bimonthly Catholic literary journal Lamp.

I suppose you could say that it’s to Walther’s credit that he admits that there could be bad socioeconomic consequences of overturning this bit of “settled law,” but in the end it’s clear that he thinks those consequences, good or bad, are irrelevant. As he says in his last sentence, “What is right is very rarely what is convenient.” For he sees the shelving of Roe v. Wade as equivalent to “the joyful fact of hundreds of thousands of additional babies being born.”

In fact, although he mentions that there may be some economic downsides of Roe v. Wade, in the main he seems to agree with this:

It is not possible to conceive of our present way of life — the decline of heavy and textile manufacturing and the rise of the service economy, financialization, the collapse of traditional familial and other social structures, the subsuming of virtually every facet of our existence into digital technologies — in the absence of the estimated 63 million abortions that have been performed in America since 1973.

[In the last twenty years], countless economists and social scientists have argued the opposite: that legal abortion is not only compatible with but also necessary for sustained economic growth. Among other things, reduced access to abortion is correlated with lower rates of labor force participation, reduced wages and increased job turnover.

If the actions of major corporations in states such as Texas, which recently banned abortion after about six weeks of pregnancy, are any indication, America’s business establishment agrees. The boards of corporations like Citigroup, with a fiduciary duty to their shareholders, have announced that they will subsidize travel for employees who seek out-of-state abortions.

Opponents of abortion should consider the possibility that these corporations are correct in their apparent assumption that abortion contributes to the maximization of shareholder value. Are we prepared to accept the converse proposition, to invite a reduction in shareholder value by banning abortion?

So here we have a Catholic saying that the economic consequences of banning abortion could well have been good, but he doesn’t care because abortion is a fundamental wrong—it’s murder.

I don’t care that much about socioeconomic consequences, either, but for the opposite reason: I see abortion in the main as a societal and personal good, preventing the state from interfering from a woman’s ability to control her own body. The difference between Walther and me is that I don’t see a fetus as equivalent to a sentient human being, and would probably extend Roe v. Wade further than even the its present limits (first and perhaps second trimester).

And this difference comes from Walther’s Catholicism. Where, I ask, is the evidence (beyond that asserted by religious authorities) that abortion is identical to murder, even in its very early stages? There is clearly a developmental continuum in a fetus, with an abrupt break when the baby is born, and so drawing a line for when a fetus becomes equivalent to a person with rights, including freedom from “murder”, is purely arbitrary. Many Catholics, though, draw the line at a rationally insupportable stage: fertilization.  A “person” is not created at fertilization: we have a zygote that now will go on to continue development. That zygote is an undifferentiated ball of cells without mentation or the ability to feel pain. And there’s no evidence it has a soul or anything differentiating it from the embryos of any number of vertebrate species.

But I digress: read the article: 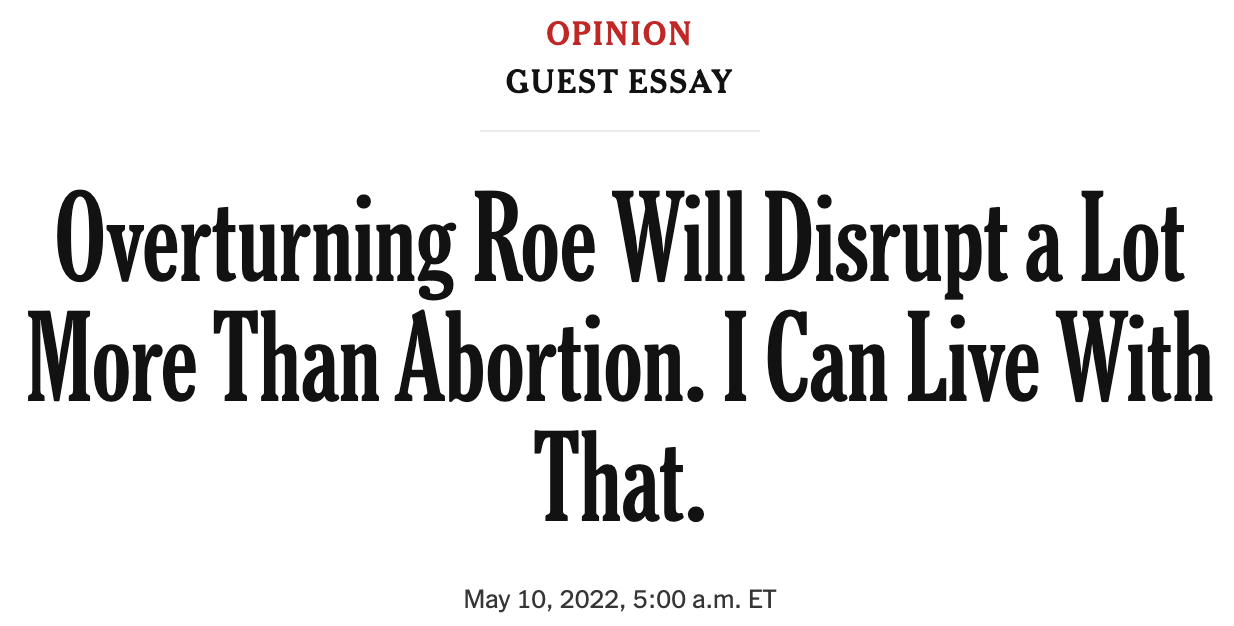 Here Walther asserts the equivalence of abortion with murder, which outweighs any possible negative societal consequences (my bolding).

The scope of the problem is far broader than economics. Research over the years has suggested that an America without abortion would mean more single mothers and more births to teenage mothers, increased strain on Medicaid and other welfare programs, higher crime rates, a less dynamic and flexible work force, an uptick in carbon emissions, lower student test scores and goodness knows what else. If you sincerely believe, as I do, that every abortion means the deliberate killing of an innocent human being, is there some hypothetical threshold for negative growth, carbon dioxide levels or work force participation rates beyond which the protection of that life would be too burdensome?

For me, the answer is no.

. . . .I believe that those who oppose abortion should not discount the possibility that its proscription will have consequences that some of us would otherwise regret. To insist, as opponents of abortion often have, that the economists John Donohue and Steven Levitt cannot be right about the correlation between Roe and the reduced incidence of crime two decades later strikes me as a tacit concession that if they were right, our position on abortion might have to be altered.

So far, so good. At least he admits there’s a downside to prohibiting abortion, though he sees abortion as an act whose downside can never be large enough to warrant allowing it. But then he puts on his Tish Harrison Warren suit and says, “Well, let’s justify banning abortion by being ever so much nicer to the unwanted children who are born, and by creating an atmosphere in which they could thrive.” If only it were that easy! And even if it were, I would still say that abortion is a choice best left to the pregnant woman.

For the same reason, opponents of abortion should commit ourselves to the most generous and humane provisions for mothers and children (paid family leave, generous child benefits, direct income subsidies for stay-at-home mothers, single-payer health care) without being Pollyannaish. No matter what we do, in a post-Roe world many children who would not otherwise have been born will live lives of utter misery, and many of our fellow Americans will be indifferent to their plight. If we wish to dispel the noxious argument that only happy lives are worth saving, we will have to be honest about the limits of social policy and private charity in regulating the turbid ebb and flow of human suffering.

The last sentence puzzles me.  A life that can be either “happy” or “unhappy” does not begin until a child is born. Yes, you can say that a fetus has a “life”, but it is not a noxious argument to say that one of the major benefits of abortion is that it prevents unhappy lives from coming into being.

Here’s what I can live with: 60% of Americans are satisfied with keeping the Roe v. Wade prescriptions in place. I would go further, but this “settled” law seems to me a good compromise, though largely a compromise with religious people who wish to force their beliefs on the rest of us. The compromise is necessary, in religious America, to hold our Republic together, and it’s done a pretty good job in the last fifty years.

Could there be a downside of allowing abortion that’s so harmful that I would favor abolishing the practice? I can’t imagine one. There’s no chance it will drive the population to zero, and any economic consequences seem to me not harmful but helpful.  But in the end I see it as the right of a woman to determine what to do with her own body, and, like the First Amendment, that’s not something to be monkeyed with.

36 thoughts on “Quote of the Day: A Catholic notes the benefits of Roe v. Wade while still opposing the decision”