We’ve had very few ducks at Botany Pond this year. Every morning there is a pair of drakes, one of which is Putin, so named because he’s aggressive and tends to drive other ducks out of the pond. He is Dorothy’s mate. (We don’t know the other drake, who usually leaves about 10 a.m.) Later in the day, Dorothy, who’s here for her third year, appears in the pond.

Dorothy’s late appearance made me think she’s either building a nest, laying eggs, or incubating eggs. (I don’t think she’s incubating yet as she appears every day, while ducks who are sitting on a clutch of eggs leaves them only briefly once every few days for a snack and a drink.) I’ve finally located Dorothy, but first let’s make sure it is Dorothy. Yesterday I took photos of her bill to see if they matched the known Dorothy of the previous two years.

Here’s the putative Dorothy photographed yesterday to show the left side of her bill. Note the dent at the back of her head, almost certainly caused by violent mating by a male (Putin?). 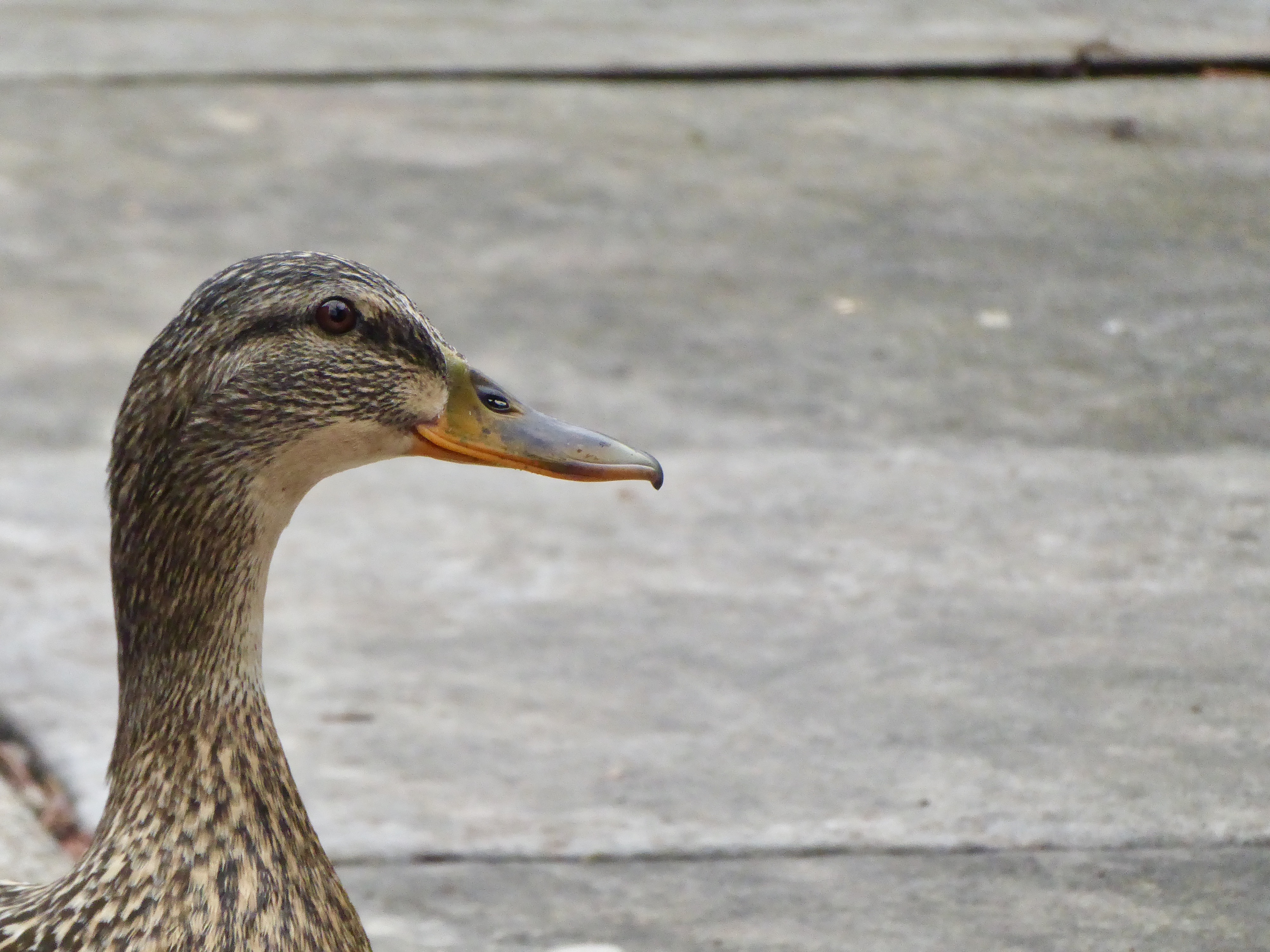 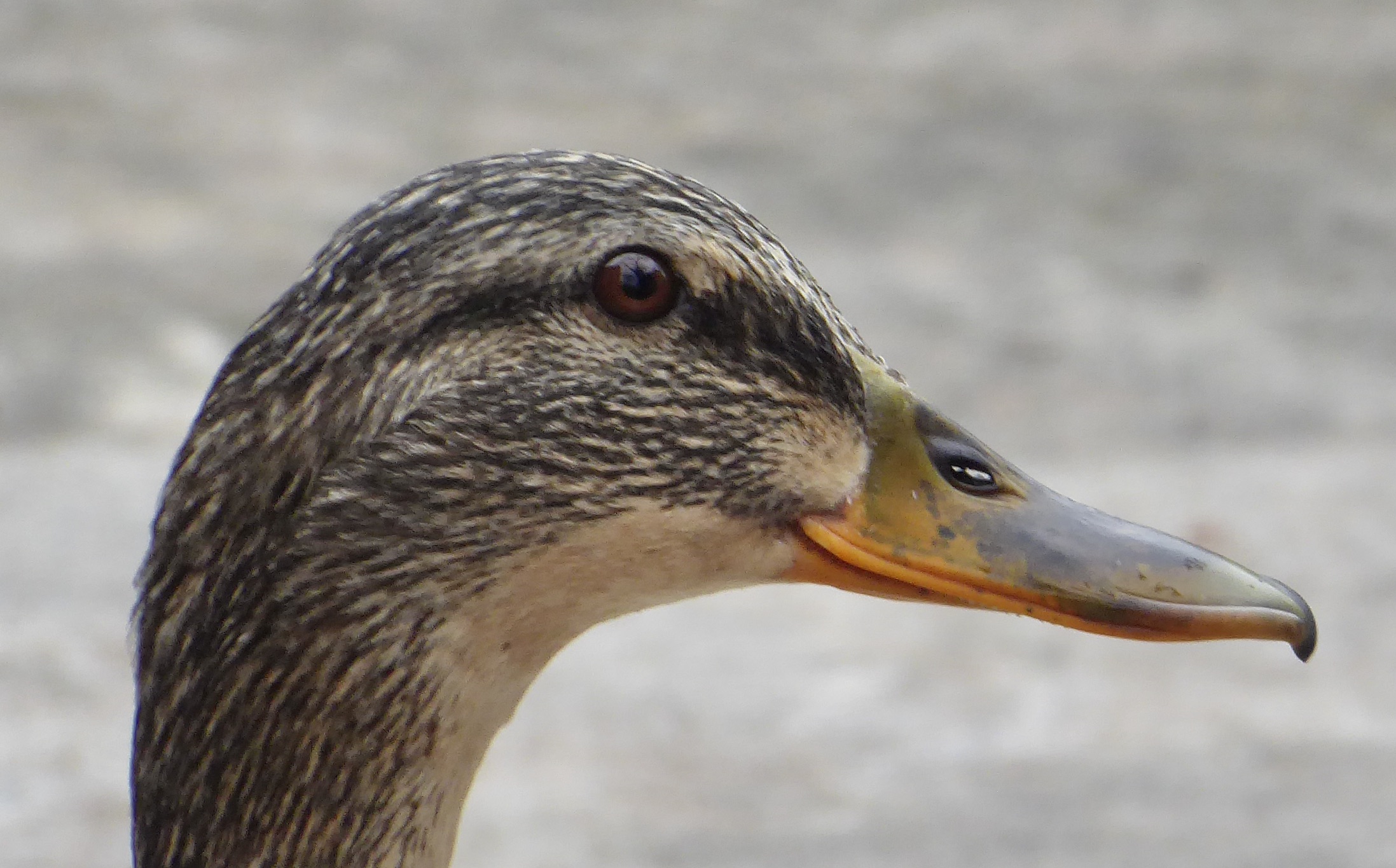 Here’s her left side in 2020. Note the diagnostic black spot and surrounding coloration (the pigmentation changes a bit from year to year.  This is a match. 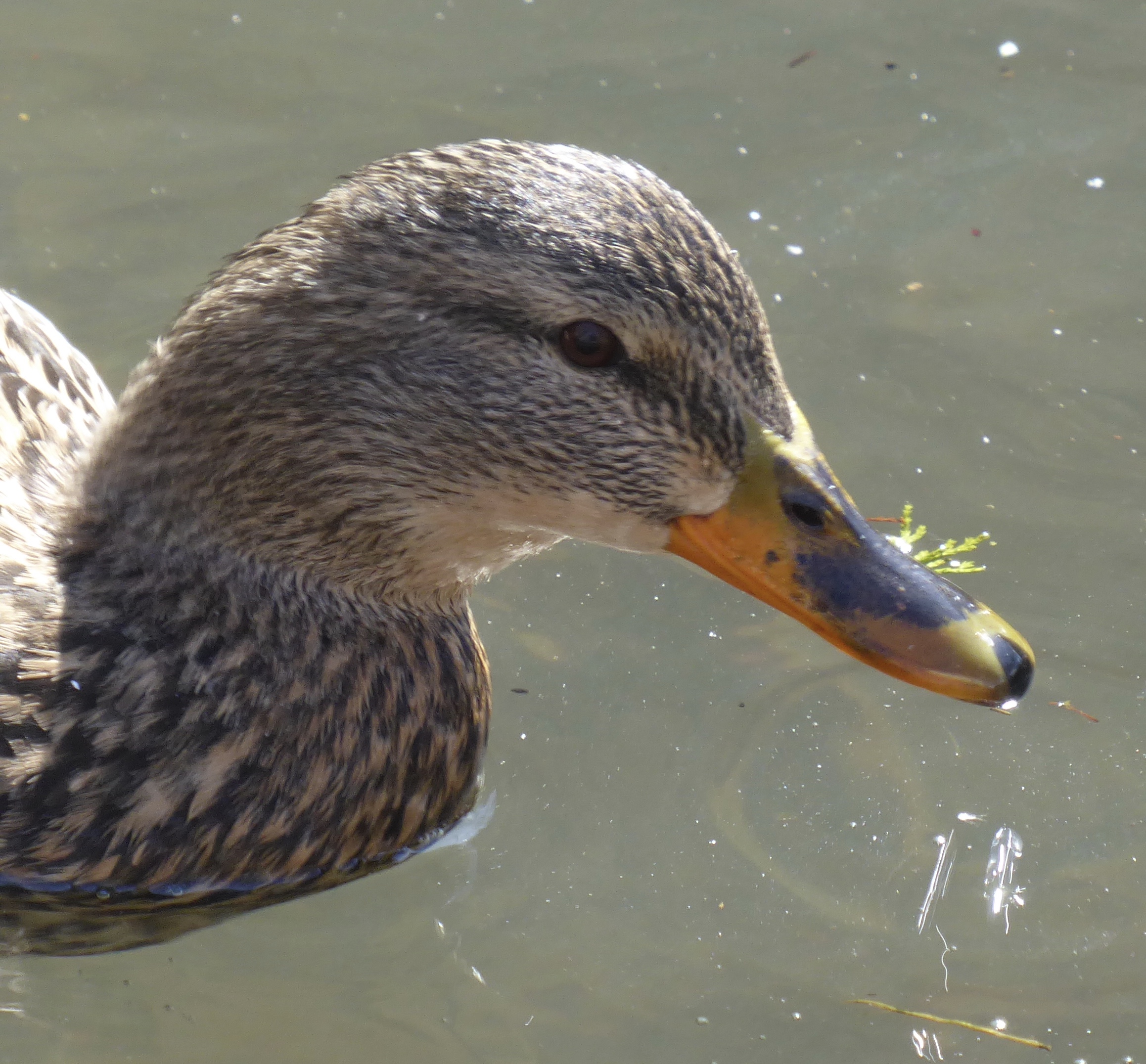 Here’s the right side of Dorothy’s bill from yesterday: 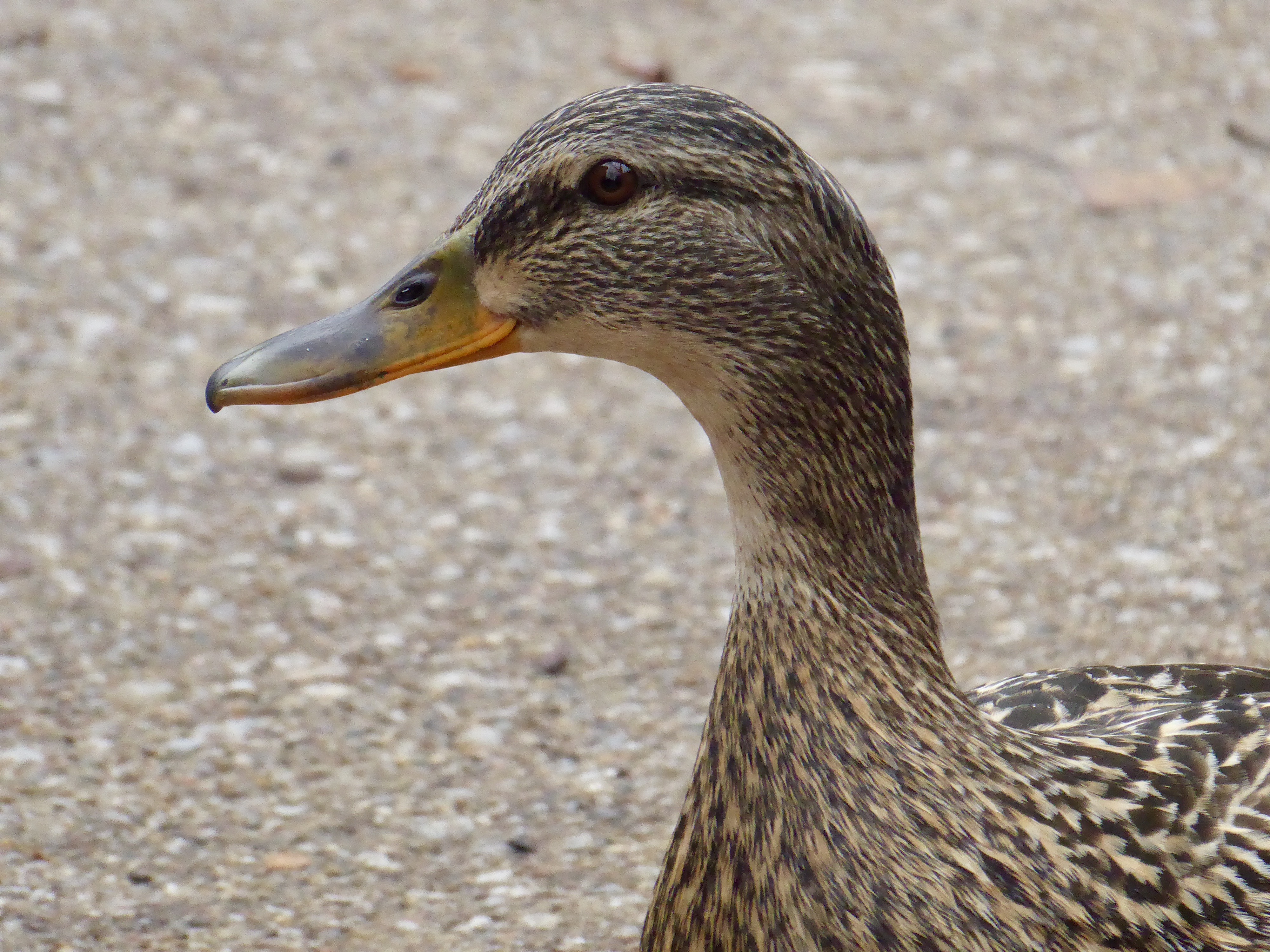 The four dots circled from above (she was called “Dorothy” because it is the long version of “Dot”—her original name). 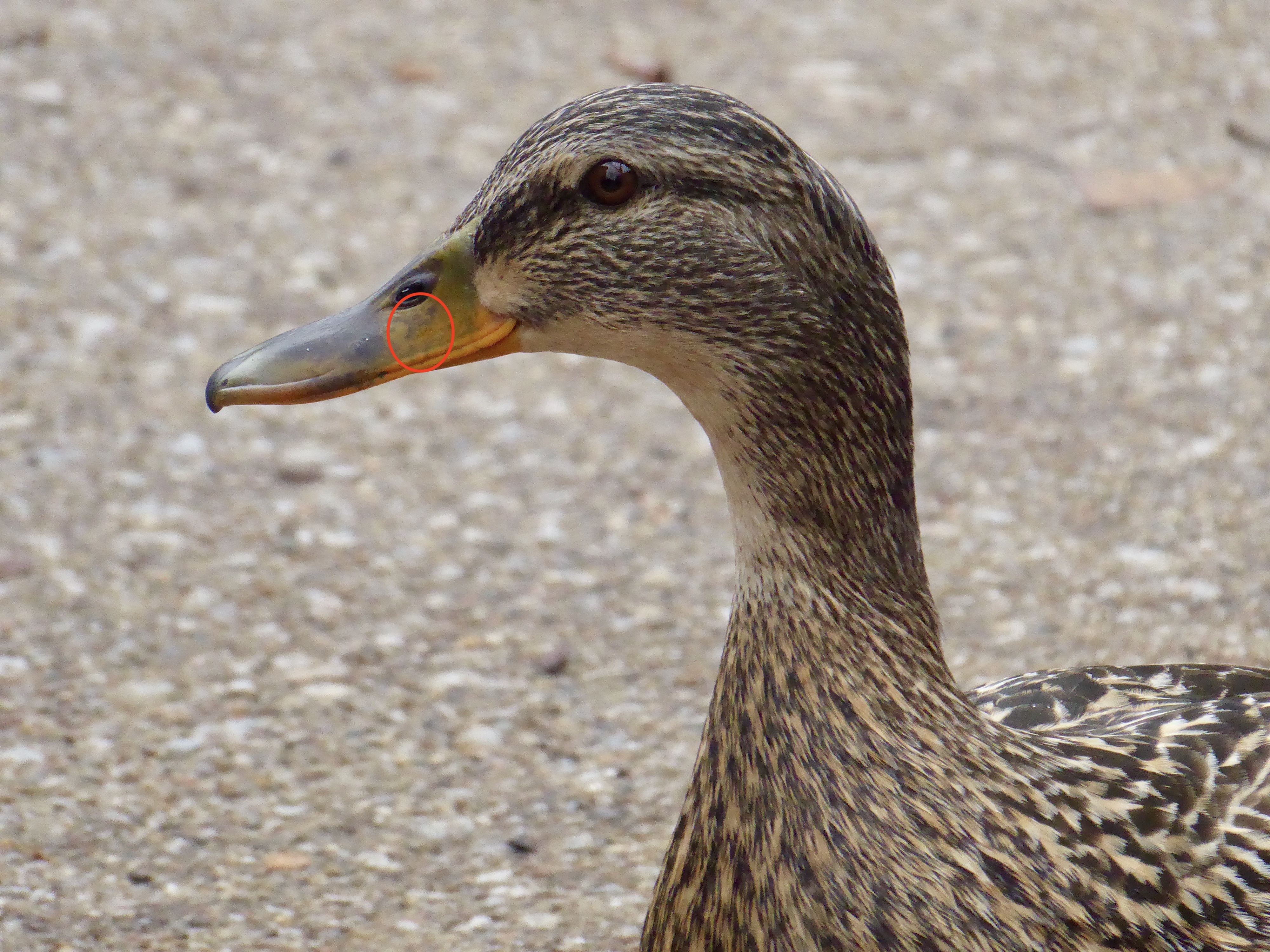 And from 2021: the four black dots are there, though they were more heavily pigmented two years ago (bill pigmentation tends to darken over the season, though). 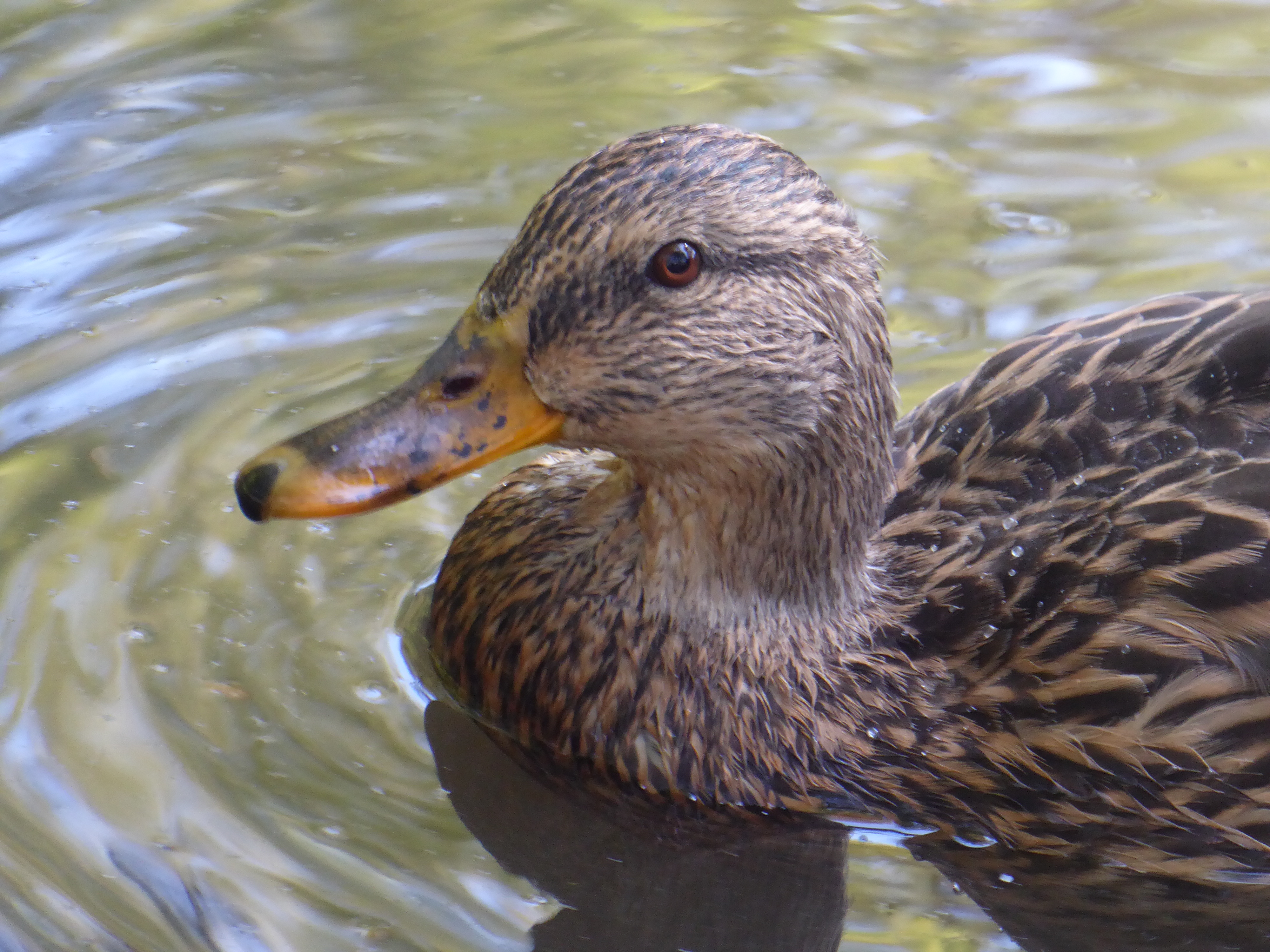 I call this one a match, though it’s not as dispositive. But taken together, I have very little doubt about this being Dorothy.

Her behavior is also familiar, as she responds to my whistle and, for a while, ate from my hand.

Dorothy’s had a hard life: two years ago Honey kidnapped her entire brood and Dorothy had to re-nest, producing a second brood that she was at last able to rear.

Here she is yesterday: isn’t she adorable? 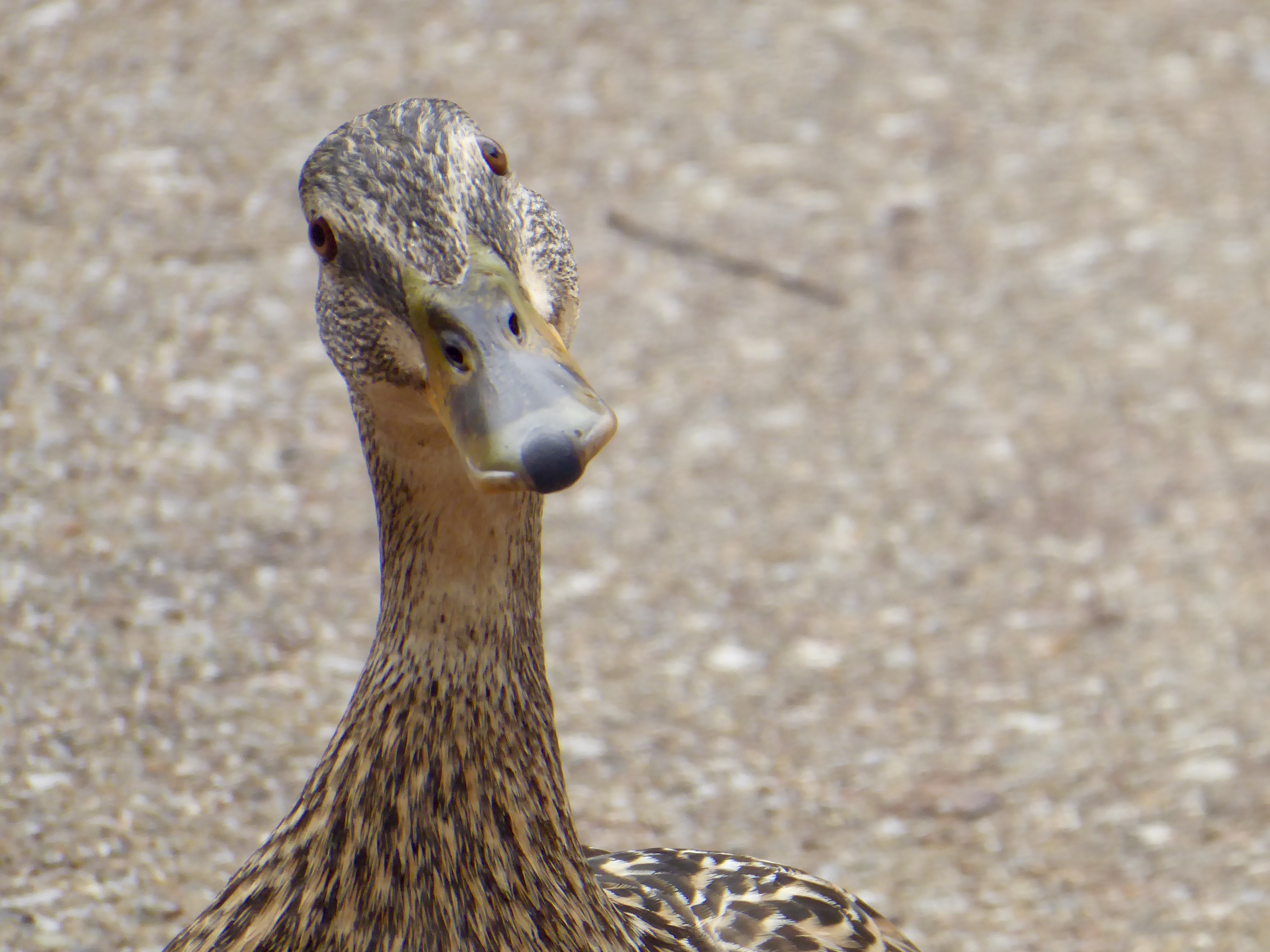 Now, the trouble! For the last two years Dorothy has nested in the same window: facing the pond, three floors up. (In 2020 she nested there twice.) This year, however, she has chosen to nest underneath the air conditioner in my office window! I discovered this when I heard scratching from my office, and, lo and behold, saw a duck head poking out from under the A/C unit. (I have A/C in my office because the unit cooling my entire lab is down for good and will eventually be replaced when the floor is renovated for someone else.)

Here she is (red arrow). I presume she chose the spot for protection. I haven’t seen any nesting materials there yet, but I can’t get a good look at her. 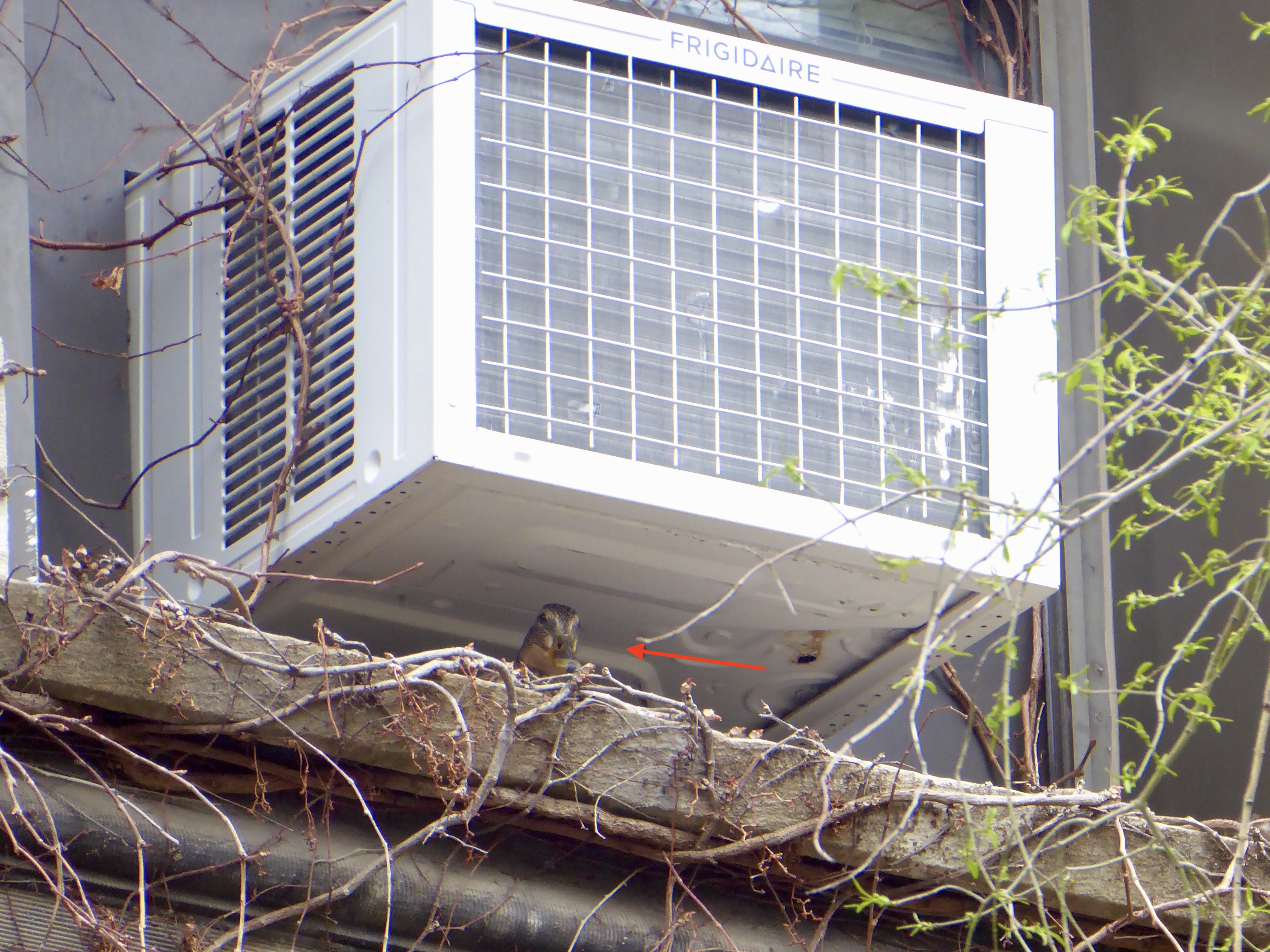 The problem is that this spot is directly above the pointed roof of a breezeway between two buildings (Zoology and Botany), and if the ducklings jump, as they will, they will land on the roof. If they survive that, and tumble down to the east, they won’t be able to get to the pond except by climbing a flight of six stairs (see below), which they can’t do. (I suppose a ramp could be built.) If they tumble to the west, they face a long walk in the grass with a wall between them and the pond; they’d have a long walk around it. If the brood flls go both ways (if they survive), I don’t know how the mother could collect them all. It’s distressing, and suggestions are welcome.

I tried to drive Dorothy away from my window when I first discovered her there (she could not yet have built a nest); I banged on occluded window, yelled, and used a scary duck call. Nevertheless, she persisted. I can understand why she loves that sheltered spot, as it protects her and her future nest from predators and rain, but, as they say, “ducks are good at being mothers, but not so good at picking nest spots.” Remember, mallards are ground nesters, and use windowsills around Botany Pond to avoid disturbance and predation—an unusual behavior that urban mallards have sometimes adopted. The babies are not adapted to jump from great heights.

Some photos of the problem

The nest site above the roof. There is no way the leaping ducklings can avoid landing on the roof. Notice, too, the metal “spikes” sticking up from the roof. My only relief is that there is no gutter to the roof where a duckling could get stuck. 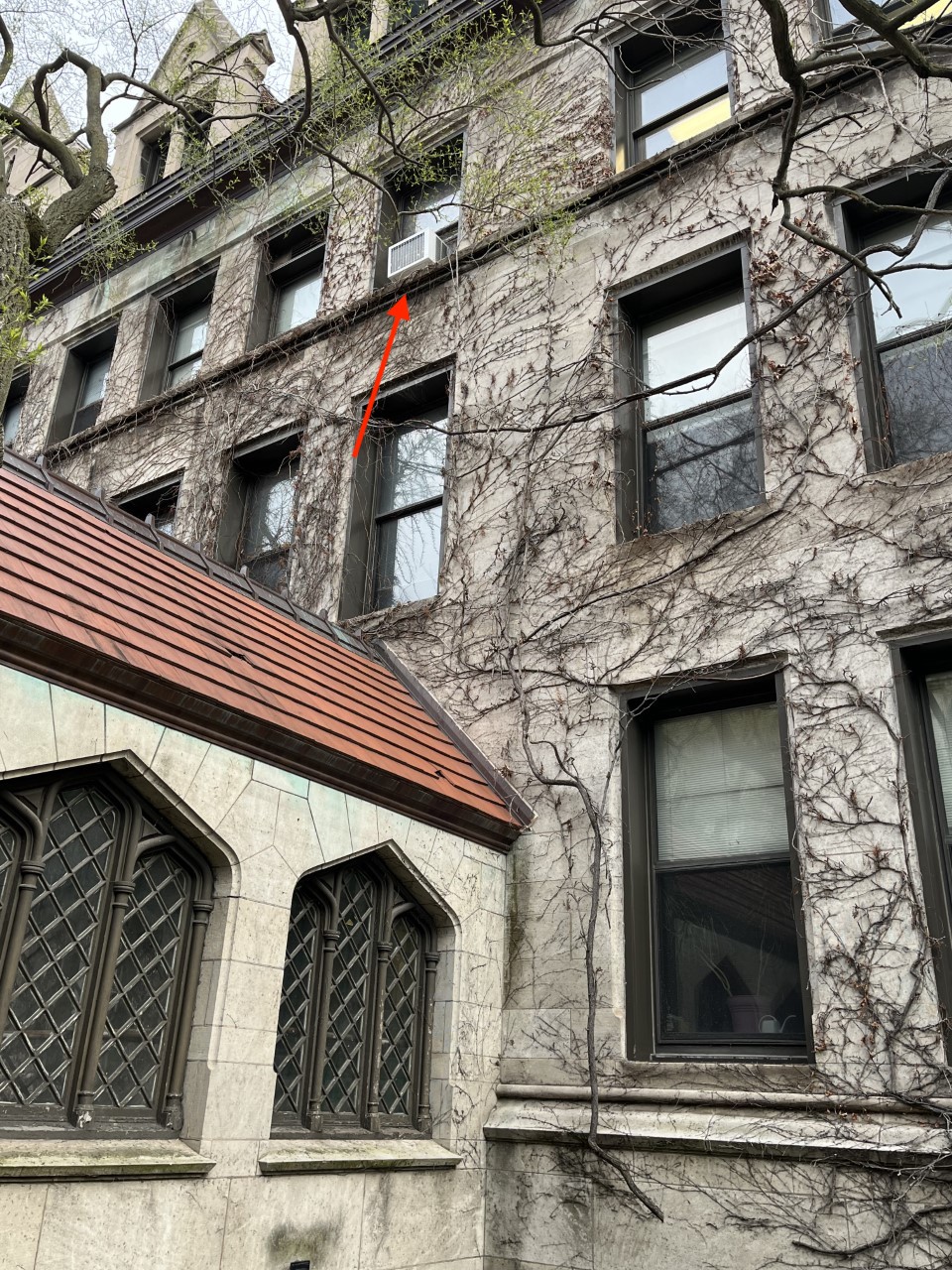 If they roll to the east off the roof (if they survive!), which is the most likely outcome, they will in all probability land in a stairwell which they can’t get out of (see below), and has railings, edges, and cement (see second photo): 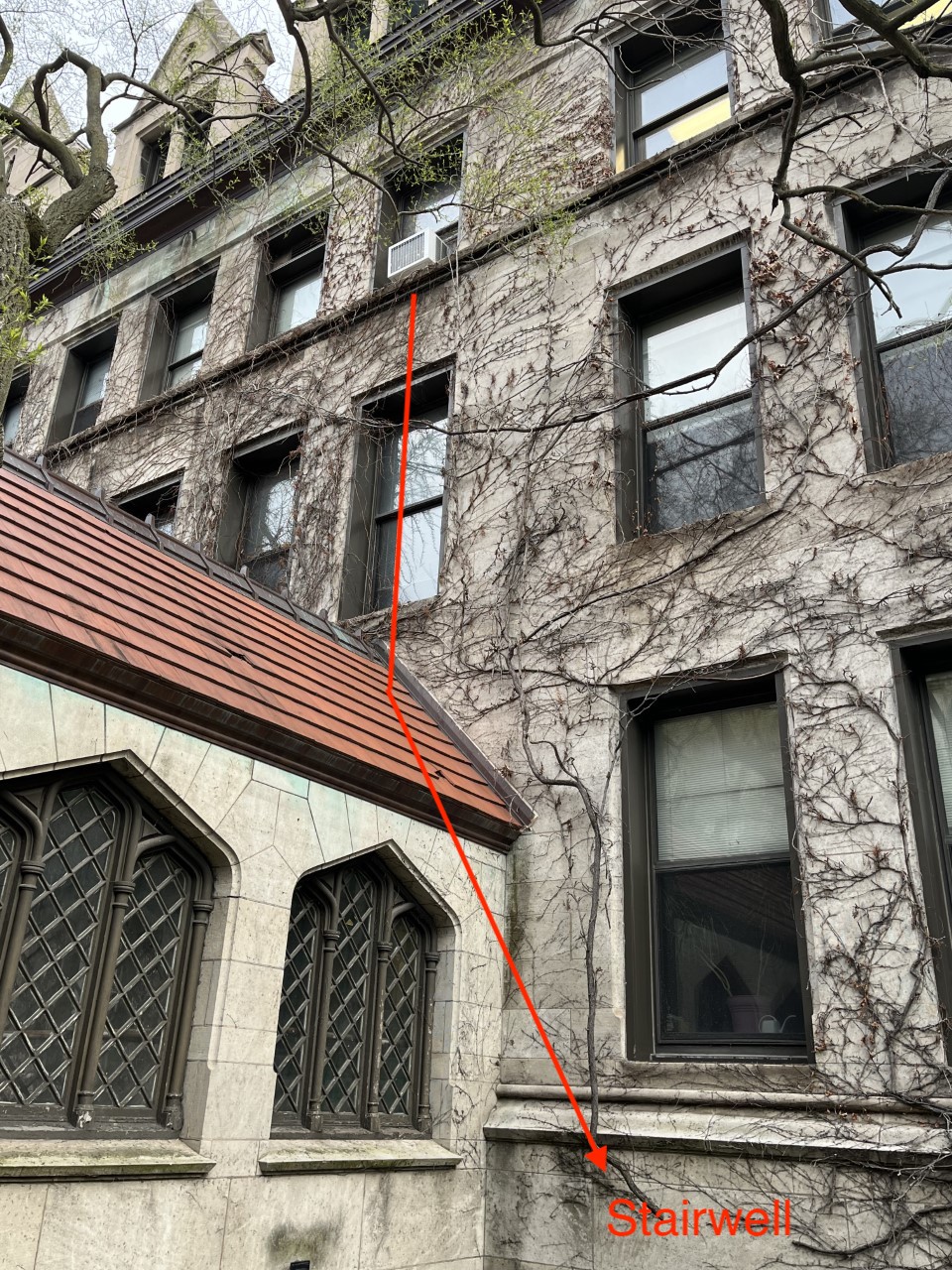 The stairwell, which spells death for a duckling: 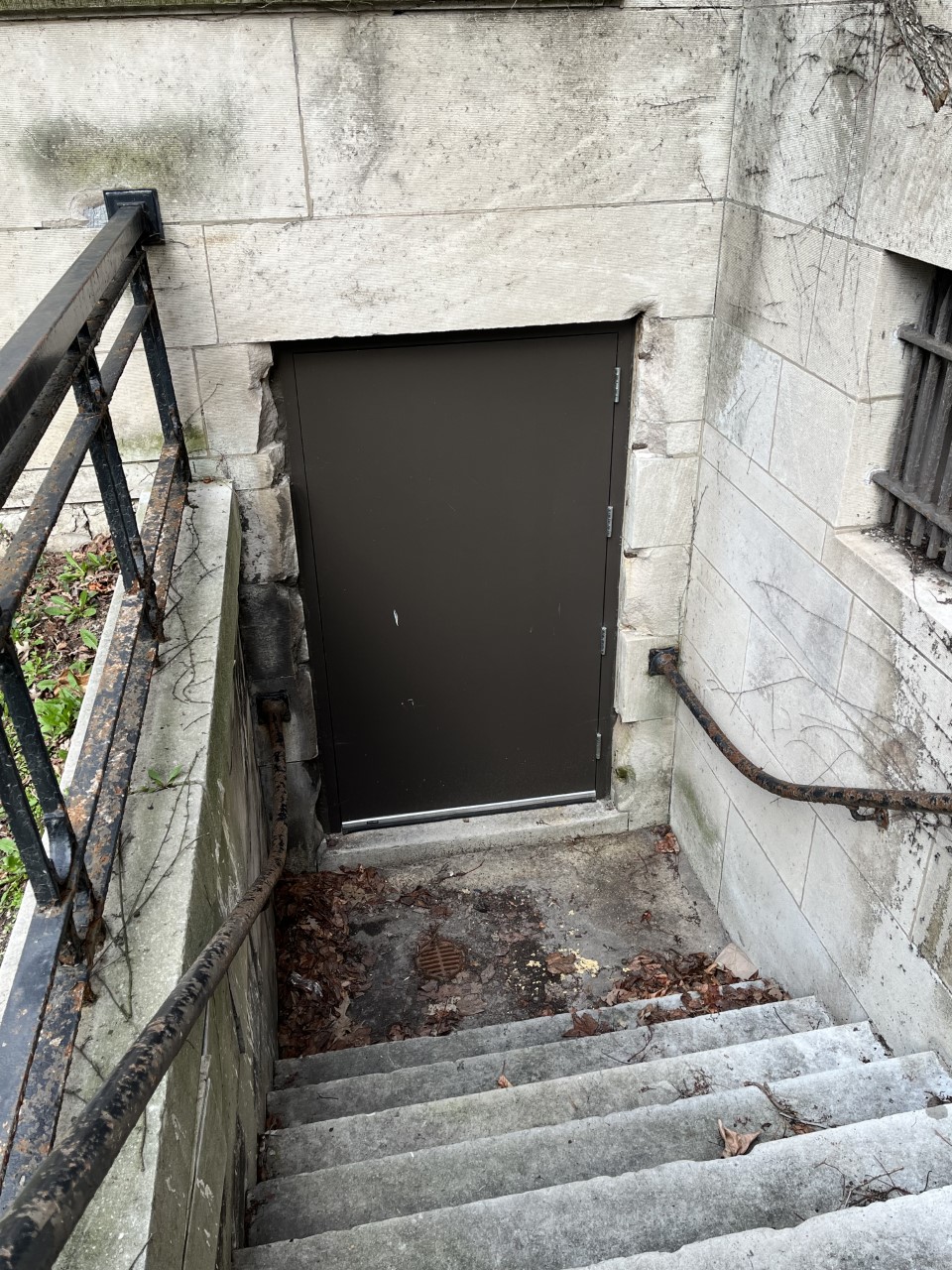 Further, even if they got out of that stairwell, which is impossible, they’re still separated by the pond by a flight of six steps up to the breezeway, and then down to the pond area. A/C unit indicated with an arrow. (East is to the right.) No duckling could climb those steps 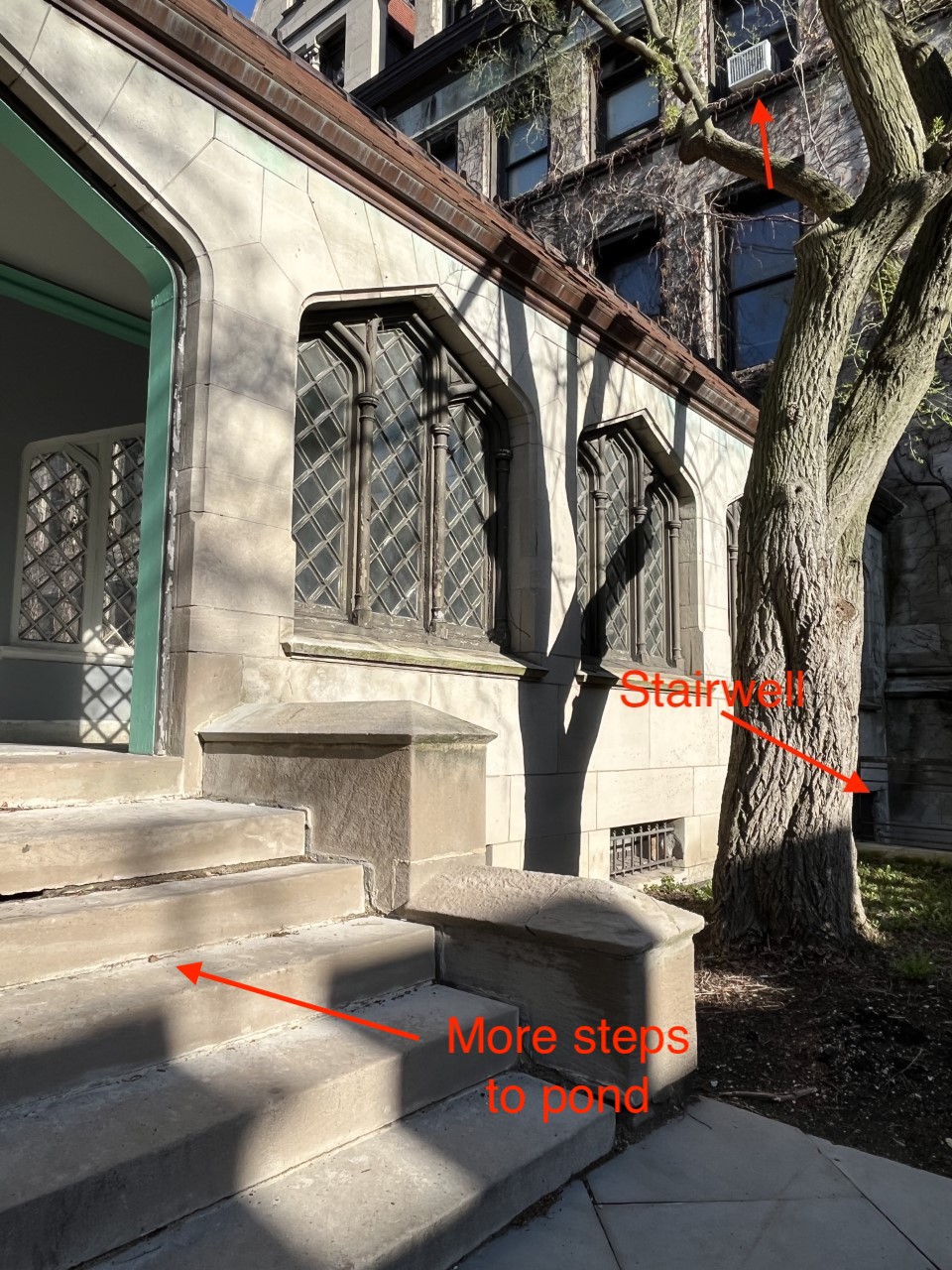 If they survive and fall to the left (west) they encounter this, and have to walk that long line beside the wall to get to the pond. Without mom leading them, it would be impossible: 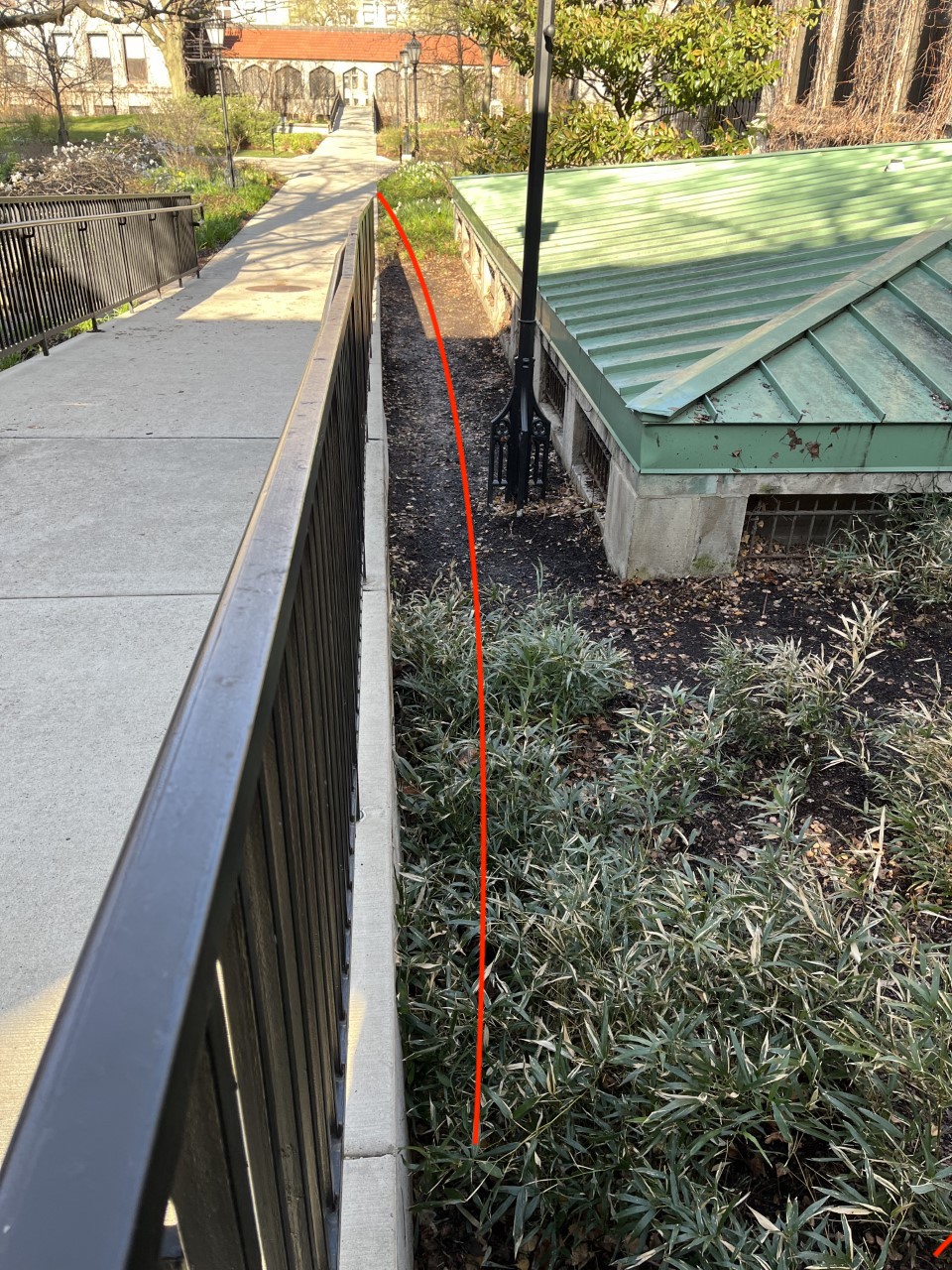 So this is what we face, and I’m not sure how to deal with it.

At any rate, the turtles have emerged as it’s been warmer and sunny, and so people come to the pond to see them, too. Putin watches them by the duck ramp: 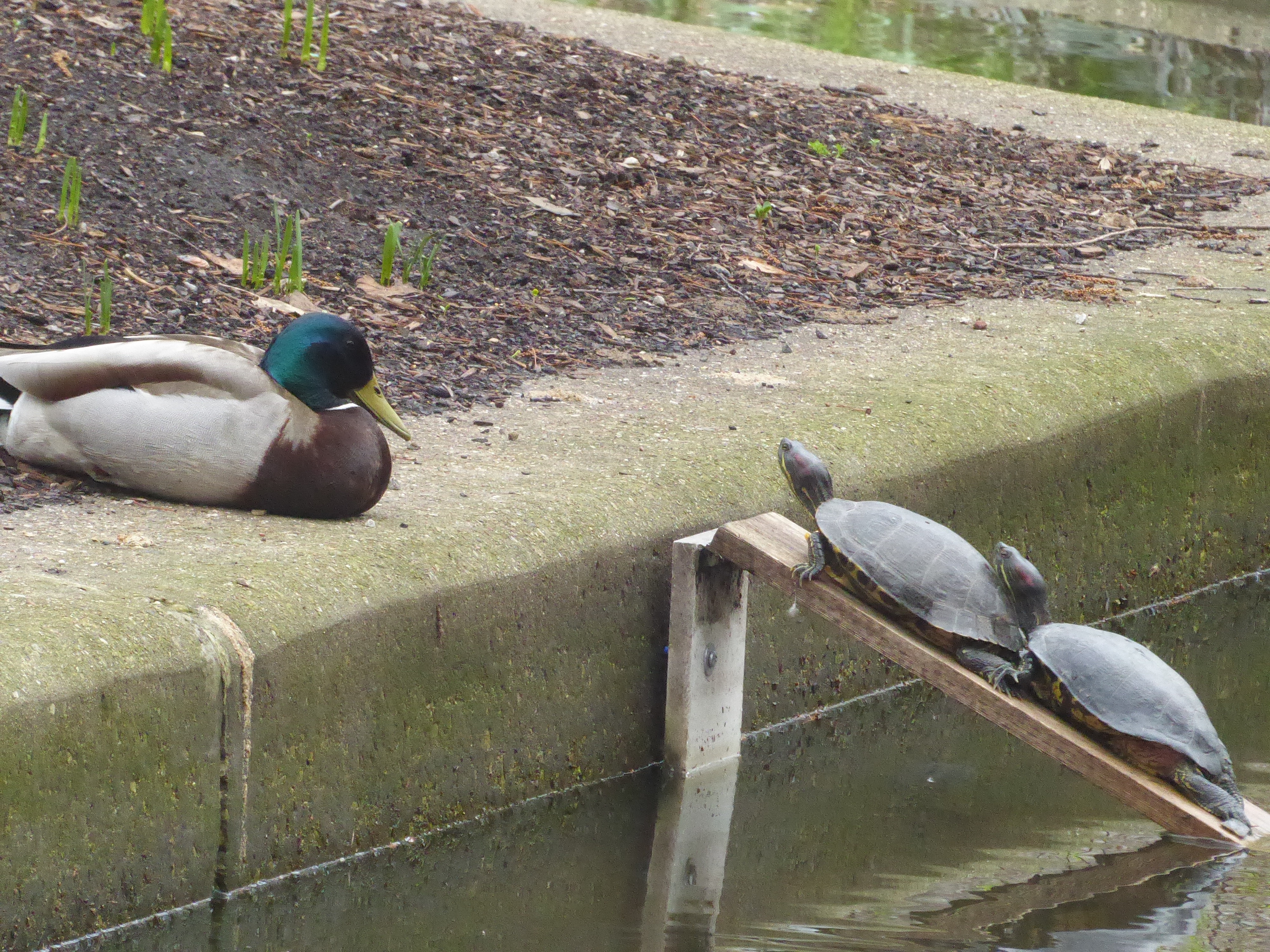 They piled up on the bank by “Duck Plaza”. 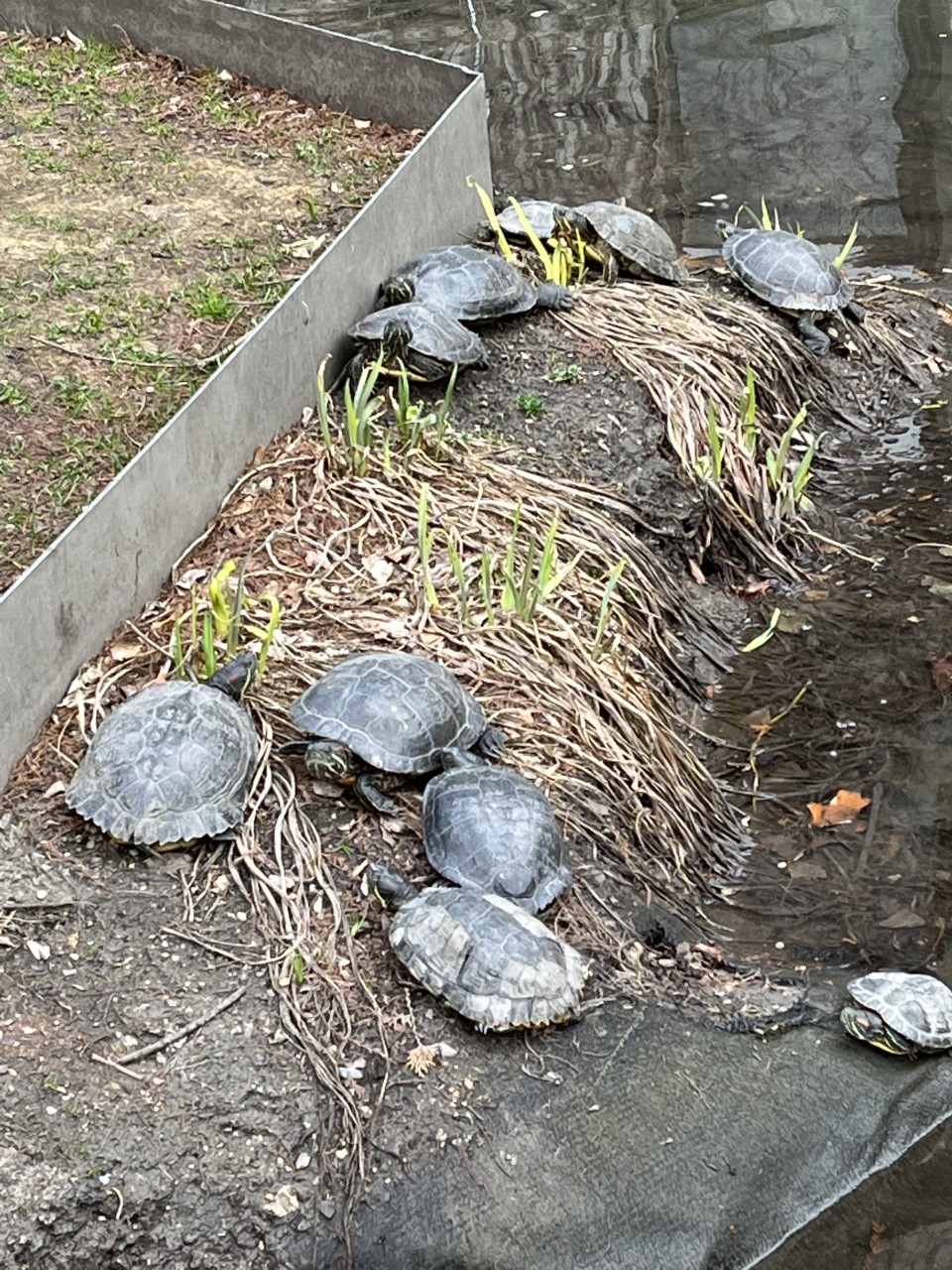