The books section of the Guardian lists its choice of the top ten cats in literature (click on screenshot). I’ll just give some of the introduction by author Lynne Truss and then list the cats and the books where they appear (there’s a description of each cat, but you can read that for yourself. 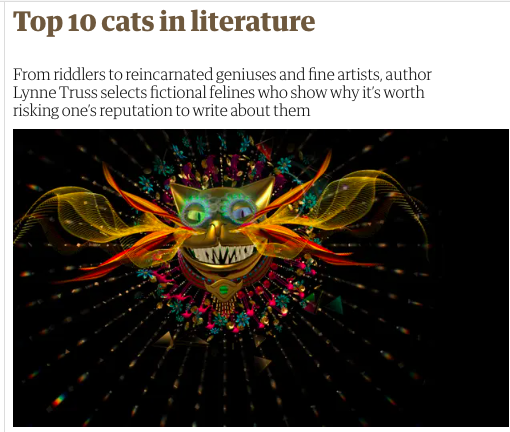 A couple of months after I took up my post as literary editor of the Listener in the autumn of 1986, I decided to write a review for the Christmas double issue: a review of two books about cats. I wrote it, marked it up for the typesetters, sent it off, and thought nothing more about it until one of the subeditors brought the corrected galley proof through to my office. “Lynne,” she said solemnly, “you won’t publish this under your own name, will you?” I replied cheerfully that I had been intending to, yes. Which was when she explained a great truth to me – that once a literary woman associates her name with cats, no one will take her seriously again.

I have been haunted by that conversation ever since. In my heart, I know that she was right. But on the other hand, cats are such good material. When I was asked to write a gothic novella three years ago, I did not hesitate to propose a funny one about evil, talking cats.

And now I’ve written a follow-up: The Lunar Cats. This time, we meet a ginger kitten mob boss who talks like Barbara Windsor and a mild scientific cat from the 18th century who voyages on the Endeavour with Captain Cook. It seems obvious to me that cats are clever and totally lacking in altruism. This means you can believe almost anything of them.

The following are masterworks by people who were bravely prepared to take the risk of being associated with cats. Noticeably, though, nearly all of them are male, so perhaps the subeditor’s warning should still stand.

4. The Silent Miaow translated from the feline by Paul Gallico
Guru cat

6. Thomasina, the Cat Who Thought She Was God by Paul Gallico
Mystical cat

7. A Case of Murder by Vernon Scannell
Avenging cat

Each link goes to a shop or a review. I’ve read #2, 4, 5, and #10, which is a must-read for cat lovers. You may think Why Cats Paint is a cheesy title, but it’s a wonderful satire of the pretentiousness of much art criticism.

But Truss has a serious omission: one of the most famous and appealing cats in literature: Behemoth the pistol-packing cat in the wonderful novel The Master and Margarita by Russian writer Mikhail Bulgakov. He’s not only a cat to remember, but the book is one of the best pieces of fiction I’ve read in several years (it satirizes Soviet Russia).

If humans acted like cats, this is how they’d behave.  One lacuna: “Cat Man Chris” doesn’t stick his butt into anyone’s face!

***************
When somebody tells me they can’t own a cat or even pet a cat because they’re allergic, my impulse (which I stifle) is to say, “Get over it. It’s worth the allergic reaction!”. But soon people may not have that excuse. This new article from Gizmodo (click on screenshot) shows that SCIENCE is coming to the rescue:

The tool used will be CRISPR, the method of gene-editing for which Jennifer Doudna and Emannuelle Charpentier won the Nobel Prize in Chemistry two years ago. Here’s how it’s done:

Allergies are most associated with the fur and dander that cats shed into the environment, but those aren’t the true culprit. A protein produced by cats called Fel d 1—which ends up in their saliva and tears and, by extension, the fur that they’re constantly cleaning—is thought to cause over 90% of cat allergies. This has made the protein an appealing target for scientists trying to reduce the burden of cat allergies, which may affect up to 20% of people.

Researchers at the Virginia-based biotech company InBio (previously called Indoor Biotechnologies) have been working on their own approach. They’re hoping to use CRISPR, the Nobel Prize-winning gene editing tech, to produce cats that simply make little to no Fel d 1. In their latest research, published Monday in The CRISPR Journal, they say they’ve collected evidence that this can be done effectively and safely.

Here’s the free paper, which is only suggestive:

The authors show that they can achieve in vitro inactivations of the gene in tissue-cultured cat cells, but they have not produced living cats with the inactive gene. Nor have they shown that knocking out the gene has no harmful effects: this is an extrapolation from lab work showing that the protein is tolerant of many substitutions among different felid species, which to them implies that the protein itself is not essential for viabilty. That’s not a logical conclusion, though they may be right. The article goes on, restating what I just said:

Analyzing the DNA of 50 domestic cats, they found regions along two genes primarily involved in producing Fel d 1 that would be suitable for editing with CRISPR. When they compared the genes of these cats to those from eight wild cat species, they also found that there was a lot of variation between the groups. That could indicate, as other research has suggested, that Fel d 1 is non-essential to cat biology and can thus be eliminated without any health risks. (Some cat breeds, like the Russian blue and Balinese, are often touted as being better for people with allergies because they may naturally produce less Fel d 1.) Lastly, the team used CRISPR on cat cells in the lab, which seemed to be effective at knocking out Fel d 1 and appeared to produce no off-target edits in the areas they predicted that edits would most likely happen.

The upshot is that we’re a long-long way from producing hypoallergenic cats, and gene editing, as Matthew shows in his new book, can have all sorts of unexpected and dire consequences (it’s prohibited in humans).  I’d say to just tolerate the allergy or get a Russian Blue. It’s worth the sneezes!