Where we are now: The ship’s real-time map shows us where we should be: at the docks in Valparaiso, the port for Santiago. I was awake when we pulled up alongside the pier at 5:30 or so, and docking was surprisingly smooth: 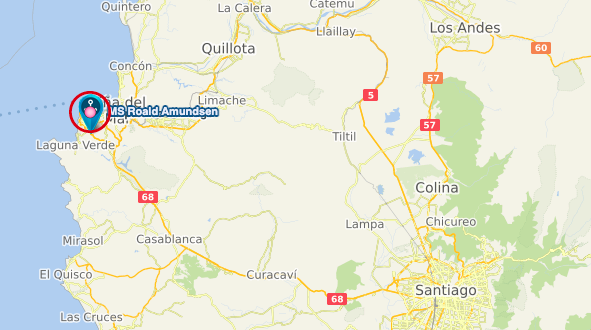 The passengers will begin leaving the ship at about 8 a.m., and, as crew, we leave last: a bit before noon.  Then to the airport hotel to cool our heels. I have a PCR test tomorrow morning and my flight leaves tomorrow evening, arriving in Houston about 5:30 a.m. Tuesday morning 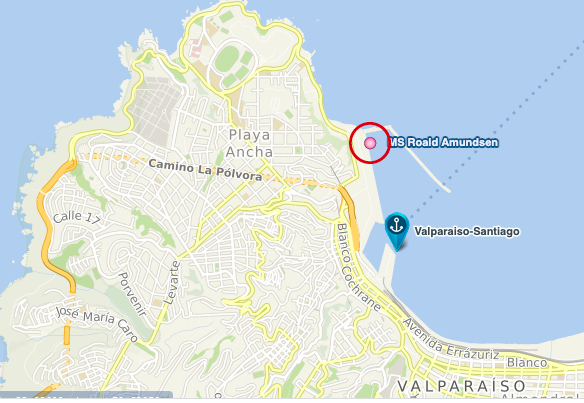 The harbor at Valparaiso; it seems that half the Chilean Navy is here: 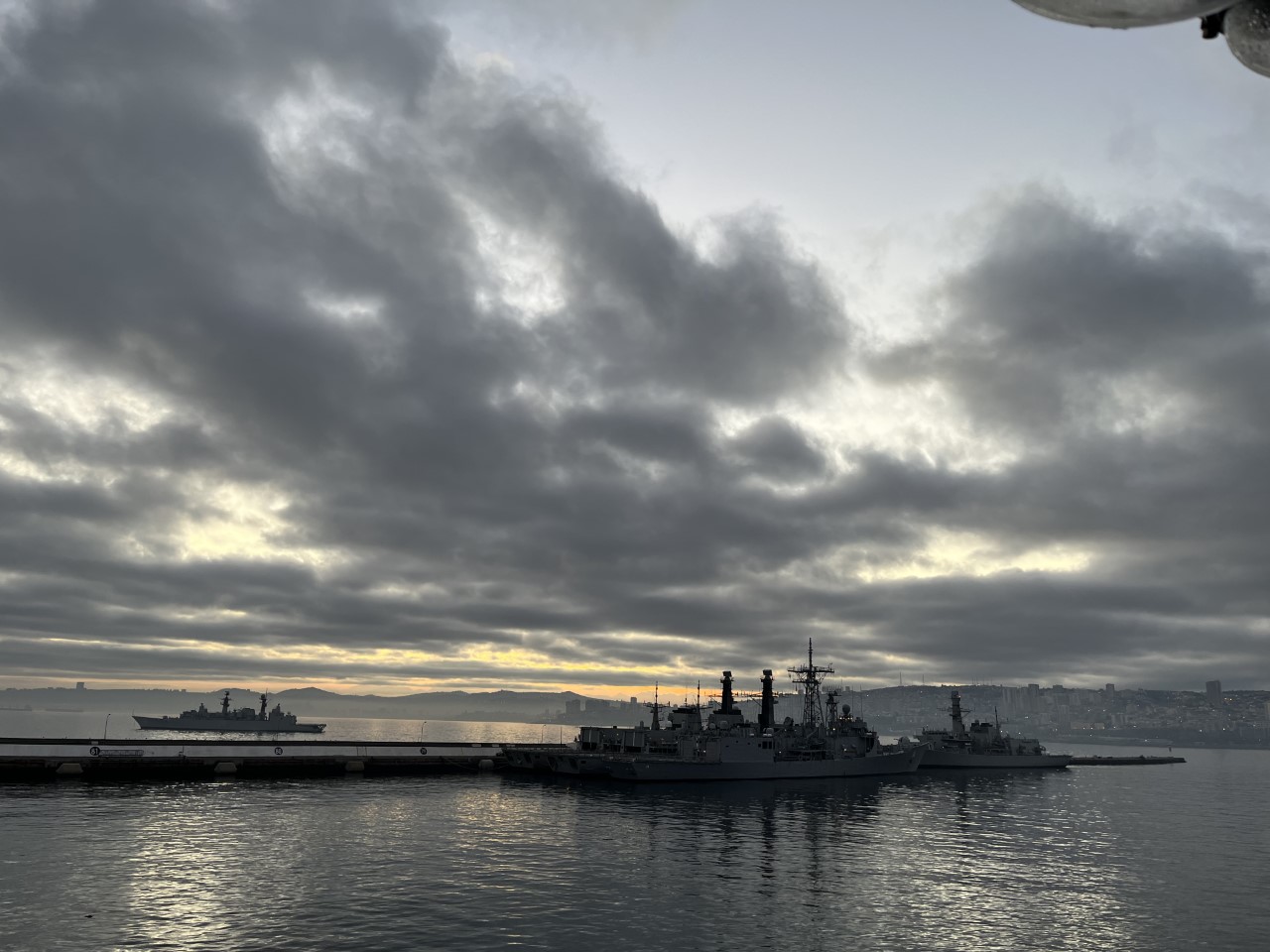 And its fabled hills. I spent four or five days in this town in 2019, waiting for our late ship to arrive. 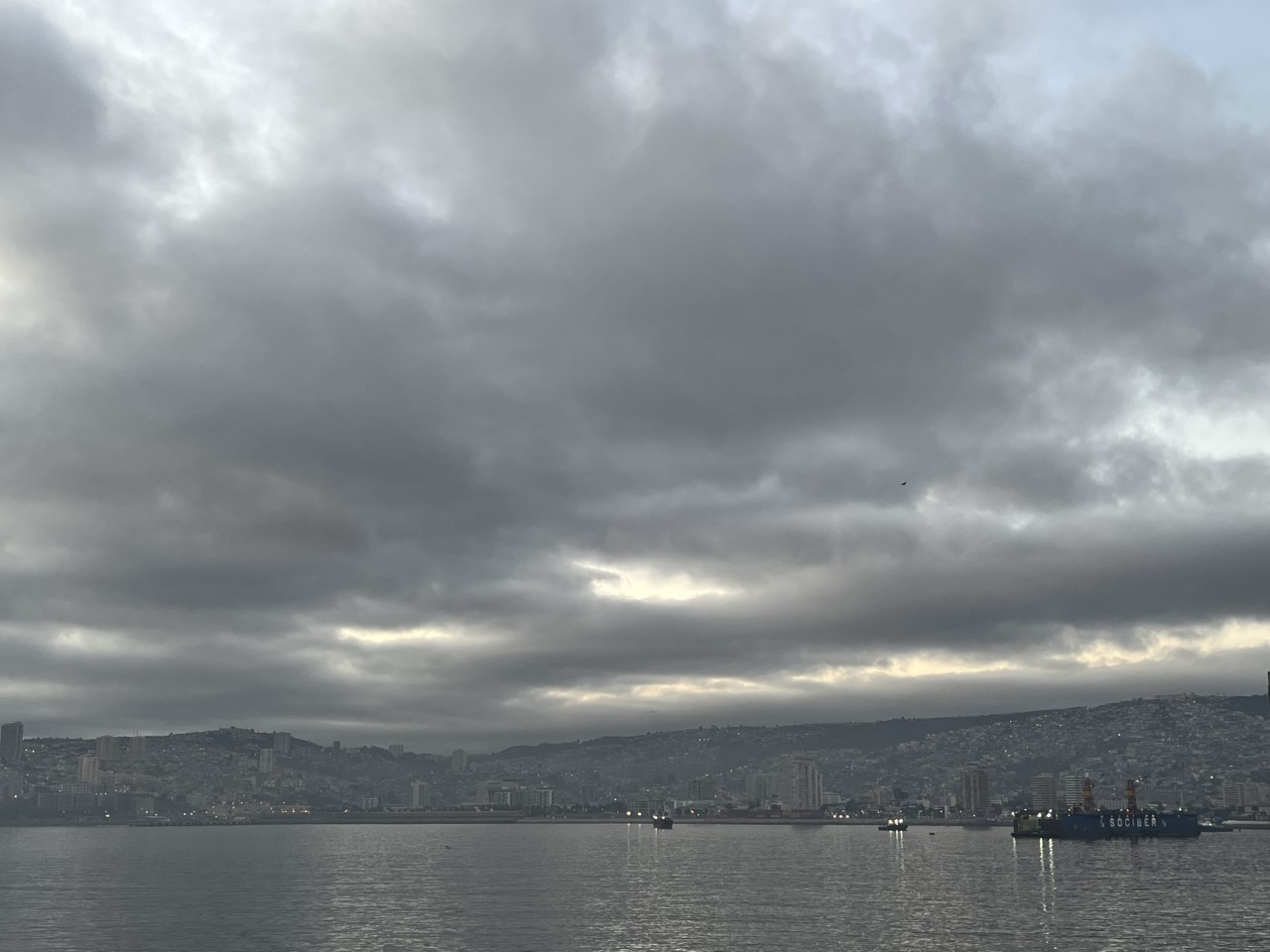 Rabbit at rest: A panorama of the docks; we’re moored next to a bunch of cargo containers.

Greetings on a Santiago Sunday: it’s, April 3, 2022, National Chocolate Mousse Day, an estimable dessert when made properly, as at Chez Denise in Paris.

If you want to help out with “this day in history”, go to the Wikipedia page for April 3 and give us your favorite notable events, births, and deaths.

Before you read the news below, take today’s New York Times news quiz, with eleven questions. I got eight, and failed the pop-culture and sports questions, as well as the Coors question.

*The NYT “big story”, which was a banner headline last night, says that Russian troops seem to have given up trying to take Kyiv. An especially horrifying report involves evidence (not yet verified by the media) that the Russians executed some civilians directly. Click screenshot to read: 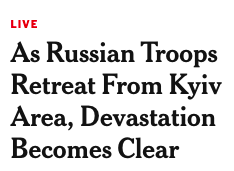 The major news from the NYT:

As Russian troops retreated from areas outside Kyiv, the Ukrainian capital, they left behind devastation that is only now becoming clear. Civilians have emerged from basement shelters to clamor for bread distributed by the Ukrainian soldiers retaking territory. The husks of destroyed tanks clutter roads. Mines and booby traps have been hidden amid the wreckage. Bodies lay uncollected in streets littered with debris.

The dead include civilians, some of whom Ukrainian officials have accused Russian forces of executing. Footage posted by Ukraine’s Defense Ministry and photographs from The New York Times and Agence France-Presse showed the bodies of men in civilian clothes on the streets of Bucha, a town northwest of Kyiv. In one photo, three people were seen lying on a roadside beside a pile of wooden pallets, blood darkening the ground beside them, one with white cloth binding his hands.

It’s not clear if the Russians will renew their assault on Ukraine’s capital or have retreated and regrouped for a fresh attack, but what is clear is that much of the city is in ruins and the assault continues in the eastern part of the country, with missile attacks on Odesa. This picture of people grabbing for loaves of bread in Kyiv, given (uncredited) in the NYT, shows how desperate the situation is: 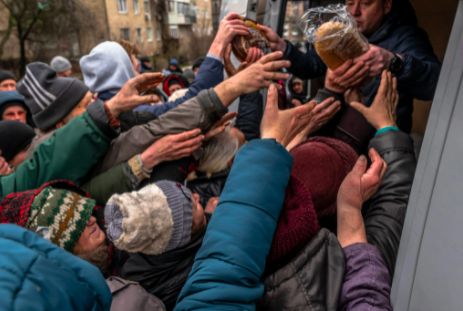 Despite reports that Zelensky and Putin would meet for peace talks in Istanbul, that appears to be b.s.:

Russia’s chief negotiator in peace talks, Vladimir Medinsky, rejected a Ukrainian counterpart’s suggestion that Presidents Volodymyr Zelensky of Ukraine and Vladimir V. Putin of Russia could soon hold direct talks. Mr. Medinsky said the two sides remained far apart on the status of Crimea and the eastern Donbas region, both of which are claimed by Russia. Russia says the status of Crimea, which it annexed in 2014, is settled, while Ukraine has proposed a 15-year negotiation process.

And, the “evacuation” of Mariupol by the Red Cross, scheduled for yesterday, once again failed as the relief convoy didn’t reach the city. It’s clear that the Russians don’t want this to happen, but the Red Cross will try again today.

From the Post, discussing Russia’s withdrawal from around Kyiv:

The shift reflects a recognition in Moscow that Russia can no longer accomplish its original goals, analysts say. After making initial gains, its forces have stalled on most of the fronts they advanced on, and they have meanwhile suffered huge losses in terms of equipment and soldiers.

*Remember Oberlin College’s battle with Gibson’s Bakery, with the court ruling that Oberlin, after repeatedly libeling the bakery by accusing it of racism, awarded $50 million in damages? That seems ages ago, and it was (see my posts here), and one of the bakery’s owners has since died, but there’s good news for Oberlin now. According to the Wall Street Journal, an appeals court has upheld the huge fine on the College, which has been having severe financial troubles:

A unanimous three-judge panel of the Ohio Court of Appeals handed down a long-awaited decision Thursday in the case of Gibson’s Bakery v. Oberlin College. The court dismissed all of Oberlin’s appellate claims and confirmed the jury’s finding that the college, a small private liberal arts institution in rural Ohio, was liable for libel, intentional infliction of emotional distress, and intentional interference with a business relationship. It then upheld the trial jury’s award to Gibson’s Bakery of $11.1 million in compensatory damages, $33.2 million in punitive damages and $6.3 million in attorneys’ fees.

The appellate judges held that while the trial court had properly found that “the student chants and verbal protests about the Gibsons being racists were protected by the First Amendment,” what separated Oberlin and placed it in a financial vise was the active, irresponsible and defamatory actions of several of its senior administrators. Rather than try to resolve the matter early on or use the resulting guilty pleas as a lesson, Oberlin actively sought to punish Gibson’s Bakery for having a different perspective, for standing by the arrest of the three Oberlin students, and for exercising its right of legal redress.

If I know Oberlin, they’ll further bankrupt the school by appealing higher up (if they can under the law). They’ve already had to put $36 million in escrow, and will eat up more in lawyers’ fees if they pursue this case. It’s time for them to cut their losses.

*The Washington Post gives a number of suggestions (with illustrations) about how to sleep on a plane. They don’t show the best way, which is to have an entire row of seats to yourself and lie down on them. Barring that, and when I have an aisle seat (my favorite), my own position is “The Risky Business,” which does get your legs bumped by people walking by and by passing carts.

*How can you resist reading an article, like this one in the NYT, called “I got lost in a Tokyo station and found the perfect comfort food”?

Kakuni translates to “square simmered” in Japanese. It’s pork belly cooked in a trinity that’s largely synonymous with the country’s cuisine: sugar, sake and soy sauce. The most expensive ingredient is time. But cooking kakuni is wildly simple: After frying your pork lightly for color, you simmer the meat until it’s soft to the touch, rendering most of the fat. This allows the base ensemble to imbue your meal with silky, molten flavor. For all of its simplicity, the dish is wildly consoling. You’re just as likely to find it chalked across the menu board of a bar as in the weeknight rotation of somebody’s home.

. . .Before my first bites of kakuni, my interactions with pork belly were seldom and sporadic: It generally wasn’t my cut of choice. I didn’t eat much bacon as a kid. I hadn’t yet fallen in love with Korean barbecue. Among the Jamaican pork dishes I grew up on, thicker cuts were generally used. And the same was true of the many banh mi I’d wolfed down across Houston, and of the backyard cookouts I’d been privy to in Texas: Great care was taken to avoid the pig’s fattiness. I didn’t know what I was missing.

So I took one bite. And then another. Each chew felt like strumming an entirely new set of chords: velvety and heartening, heightened by its directness. Then it was gone.

A photo and its caption from the article. Be sure to have plenty of rice and cold beer on hand!

*Finally, the Theranos/Elizabeth Holmes saga has been made into an 8-hour Huli miniseries called “The Dropout”. Reviews are generally positive, with Rotten Tomatoes giving it a critics score of 89%.  Amanda Seyfried is particularly singled out for her portrayal of Holmes, even getting that voice accurate. Here’s a trailer, though. I can’t watch it as I’m still on the ship:

Meanwhile in Dobrzyn, Hili and Szaron are protective:

Szaron: Do you see this crow?
Hili: I do; she probably thinks that it’s her garden. 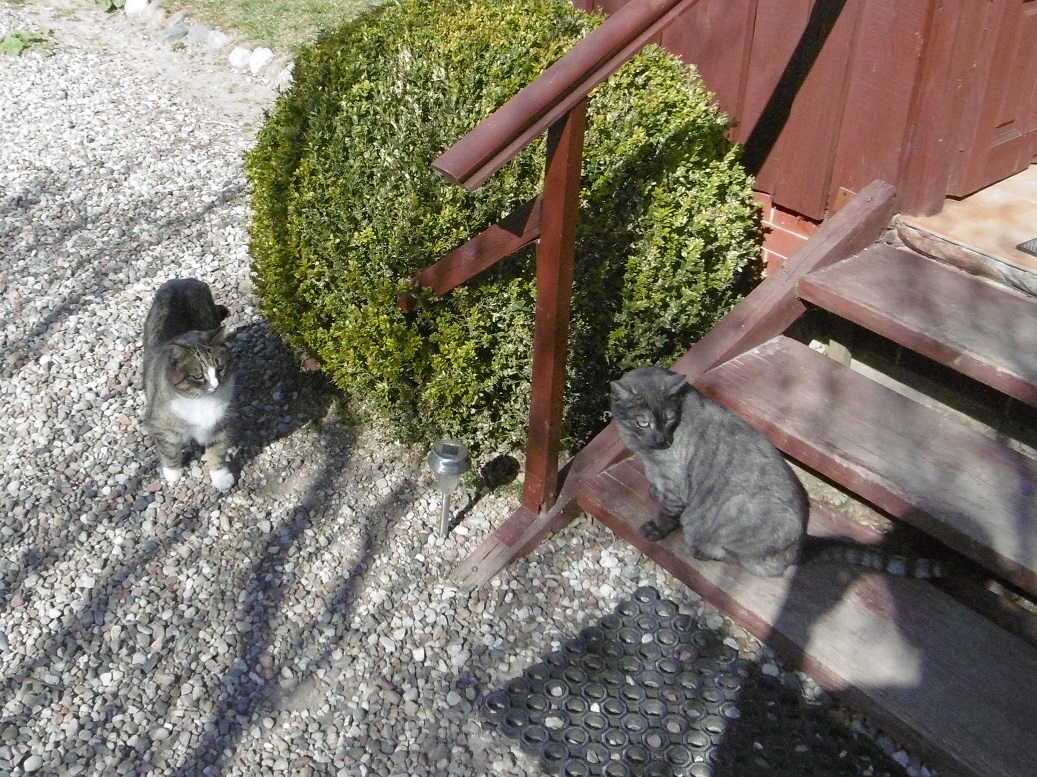 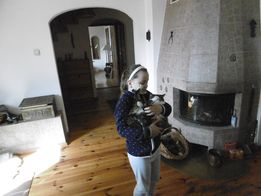 A cat meme from Barry, which is true: 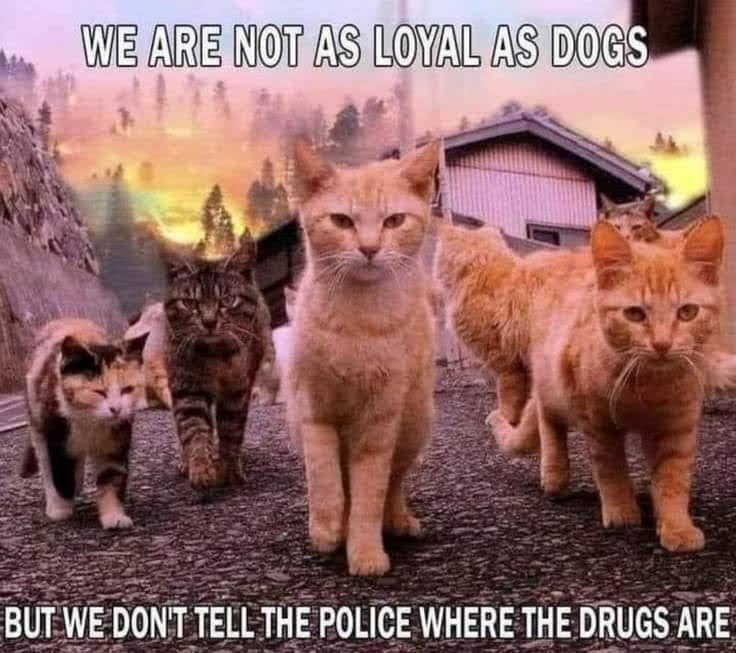 A news sign photographed by Dom. How did this happen? 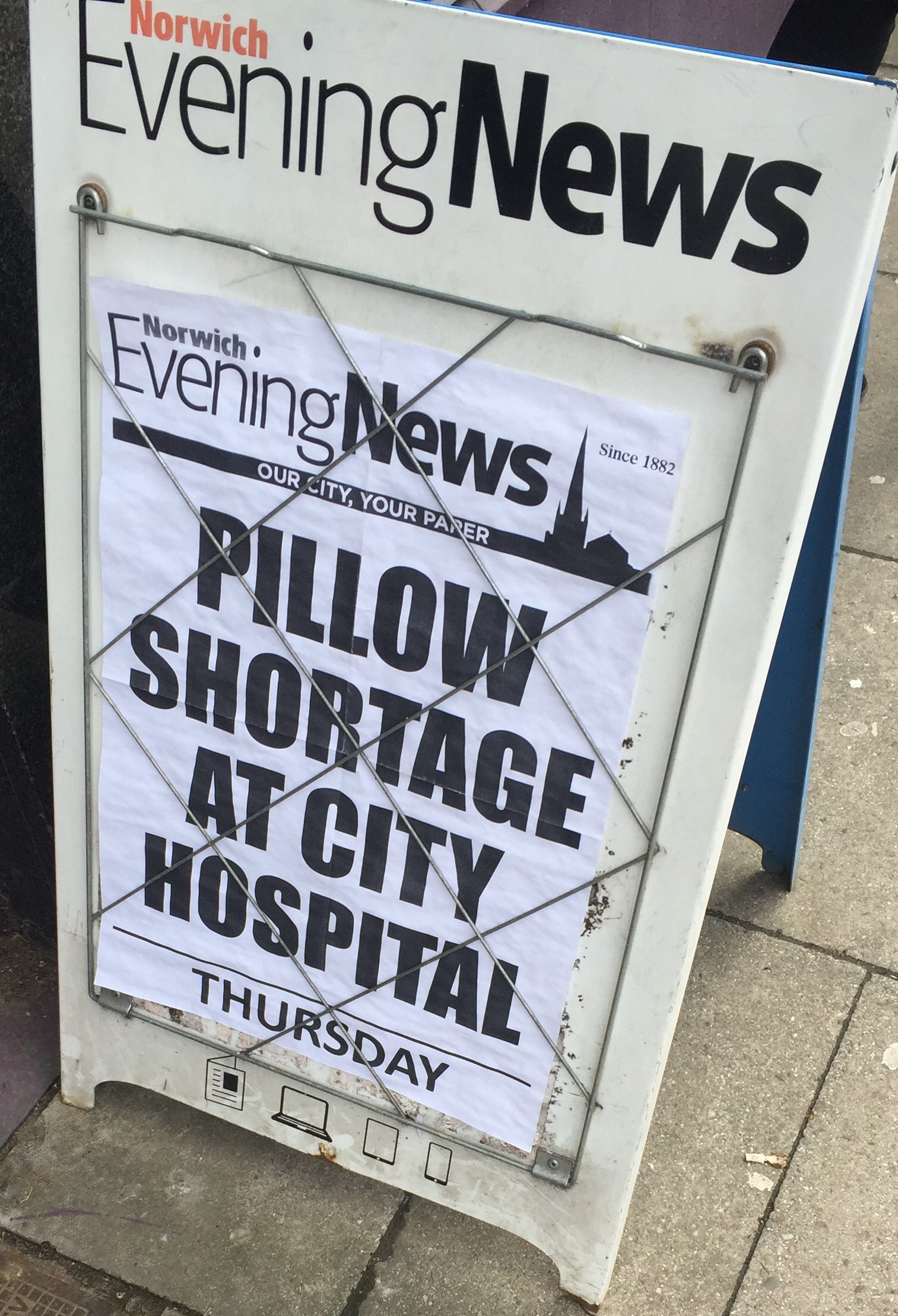 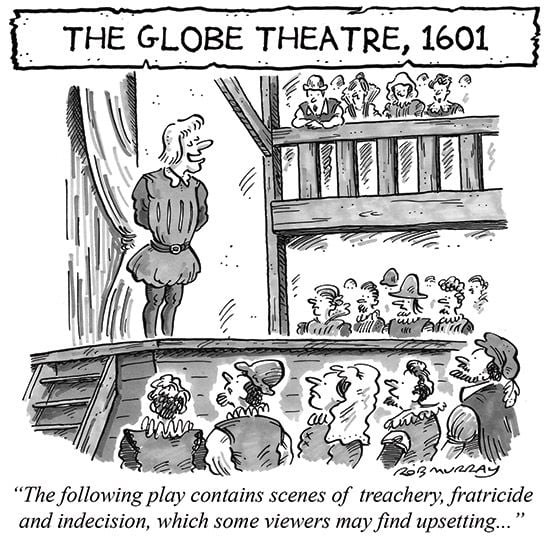 An Scottish search-and-rescue dog named Skye retires and gets a well-deserved award (retweeted by Ricky Gervais; sound on):

Can we get a round of a-paws for the latest #PDSAOrderOfMerit recipient, Skye! 👏🐶

After 11 incredible years of service, #SearchDogSkye has retired from her role as a Mountain Rescue Search Dog in the Lake District. ⛰️

From Simon: An April Fool’s tweet, but one from New Jersey’s real governor: 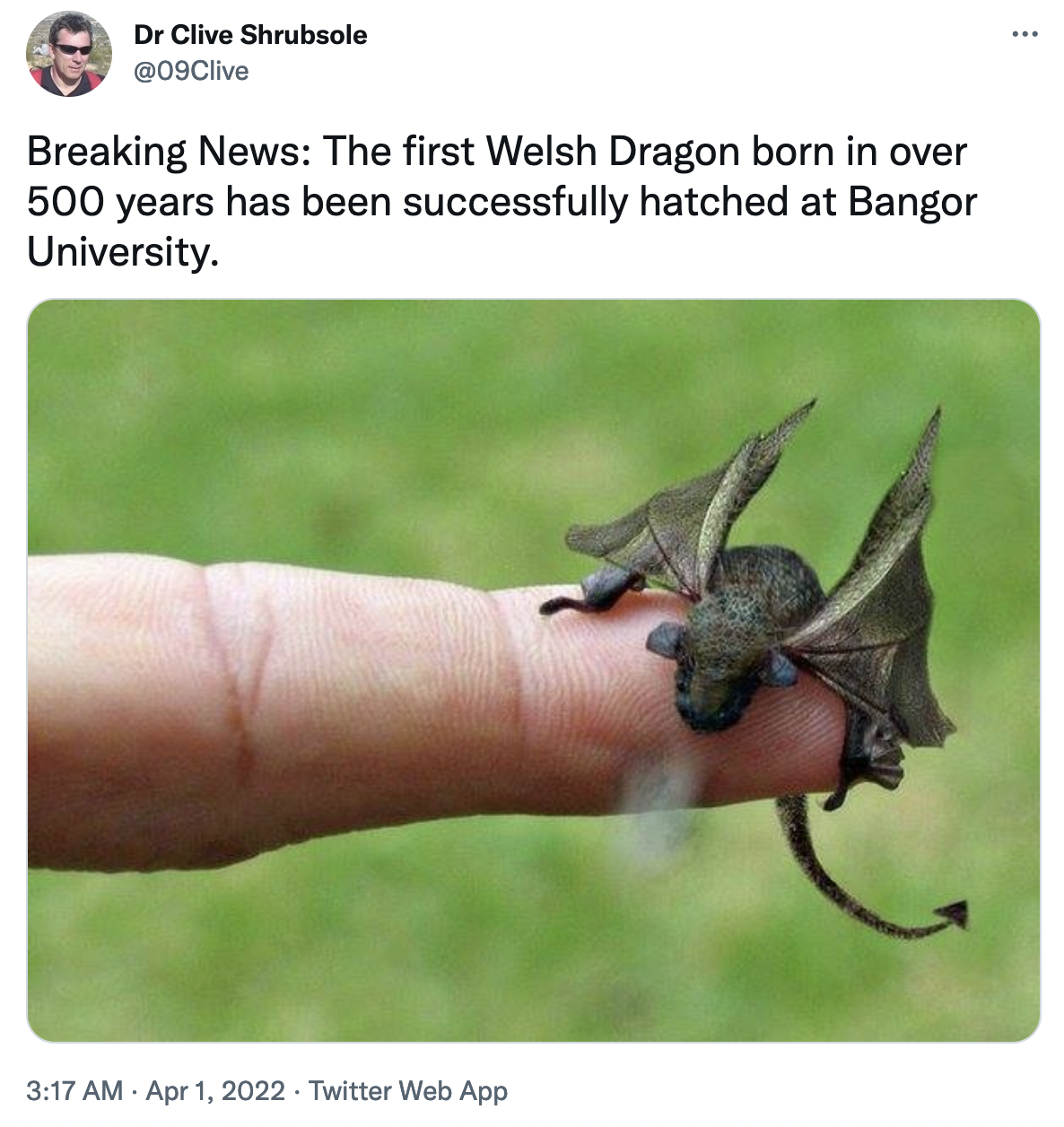 april fools. i was so good

Tweets from Matthew. Yes, the story is well known of Darwin’s orchid and the later discovery of the moth he predicted could pollinate it. Now, though, it’s even more interesting: the linked paper shows (for a fee if you don’t have library access!) that male moths (but not females) can respond to bat sonar by jamming it, stymying the predator. Why not the female moths? I don’t want to pay for the paper when I can get it free in Chicago. A minimum of $10, and it goes higher: highway robbery!

Most people know Darwin discovered an orchid in 1862 with a 30cm long flower that led him to predict the existence of a moth with a proboscis long enough to pollinate it. Said moth was found in 1903.

I think I’ve posted this one before, which Matthew called “light hearted relief” from the war. It is. If you’ve seen it, well, here it is again:

This is it guys. The pinnacle of the internet. We've done it! Pack it up, it's over. pic.twitter.com/EkqHgag0vO

I’m always amazed by how much stuff these creatures can pack into their cheek pouches.

Facilitating the rapid collection of food and providing for its temporary storage and transport, chipmunk cheek pouches can expand to the size a medium-sized wheely suitcase if necessary. pic.twitter.com/FxxVHLioMy

The best for last: Mother duckling, helped by staff, walks her 10 ducklings, who hatched in the enclosed courtyard of a hospital, though the maternity ward of a hospital to “freedom”. I’ve put the Facebook video below, though I can’t tell whether “freedom” involves what it should: a safe pond or lake (I can’t see the video on the ship).

She picked the perfect place to hatch her kids. https://t.co/t01A8PeeyR