The night before last, we pulled into the Chilean port city of Punta Arenas, one of several cities known as bases for trips to Antarctica. Wikipedia notes this:

Punta Arenas (Spanish pronunciation: [ˈpunta aˈɾenas]; historically Sandy Point in English) is the capital city of Chile‘s southernmost region, Magallanes and Antarctica Chilena. The city was officially renamed as Magallanes in 1927, but in 1938 it was changed back to “Punta Arenas”. It is the largest city south of the 46th parallel south, and at the same time the most populous southernmost city in Chile and in the Americas, and due to its location, the coldest coastal city with more than 100,000 inhabitants in Latin America [JAC: the population is listed at 128,000]. It is one of the most southerly ports in the world, serving as an Antarctic gateway city.

As of 1977, Punta Arenas has been one of only two free ports in Chile, the other one being Iquique, in the country’s far north.

To see more of the city, which we won’t be doing this trip, read my 2019 post when I was stuck here for a night and had a look around the town. Note that back then there was a breakfast buffet (and a lunch buffet) on the ship, and you could help yourself.

We’ve been here for two nights, which is over a day longer than the ship usually stops. The turnaround of the Amundsen is amazing. They let passengers off about 8 a.m., and by then the stewards are cleaning all the rooms, the cooks are busy dealing with the new food aboard, and all the gas is pumped in in a series of tanker trucks (I think it was six the last time I was here; see my post). At the same time, the sewage and garbage are removed (not a drop of anything is put into the sea from this ship) and all the food for the next trip is brought aboard. By late afternoon, we’re ready to go. Perhaps we’ll leave a bit earlier this evening since all the fuel and much of the food has been brought aboard (see below for picture).

You can learn more about the MS Roald Amundsen, and its “green features” here and here, with the latter Wikipedia article devoted largely to the unfortunate experiences Hurtigruten has had with covid (it doesn’t yet include this trip).

Here’s the dock at Punta Arenas where we’re moored. It’s large and busy, and also services other large ships as well as fishing boats. Crew and staff, including me, aren’t allowed to disembark because border controls here are very tight.

In late morning, the tanker trucks arrive, one after the other, with their cargo of fuel. Although this is a “hybrid” ship, using a combination of fuel and electricity in the manner of  a “hybrid car”, it still uses a lot of fuel. (Do not reprove me for my carbon footprint, please; this is still the greenest way to go to Antarctica.) 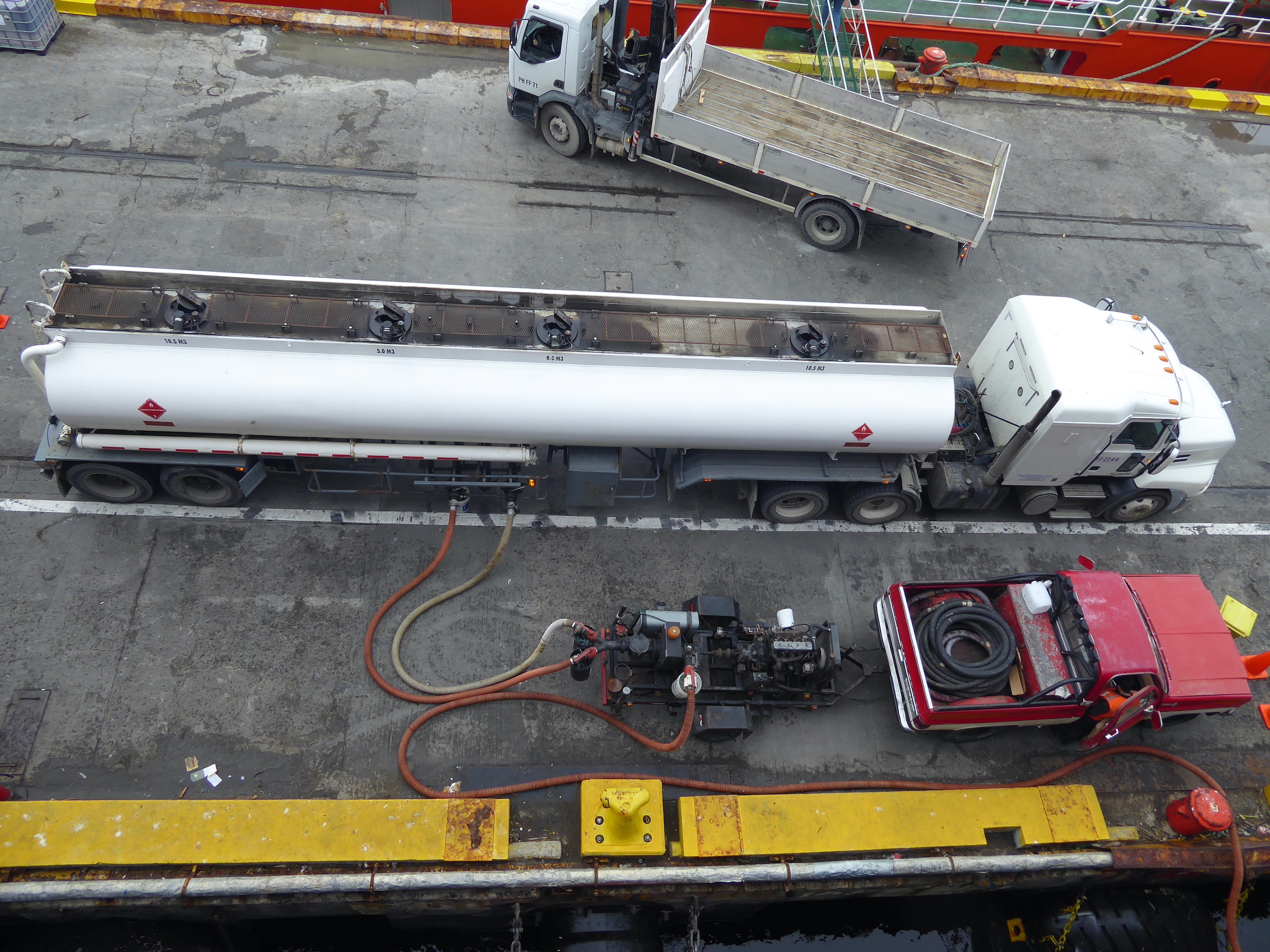 This strange machine must be the pump that puts the fuel onto the ship. See my post from 2019 (link above) for more detailed views, taken when I was allowed to wait on the dock for my ride into town.

All the packed garbage from the ship is put into dumpsters.

And I think this is a sewage truck collected the processed food that passengers ate. 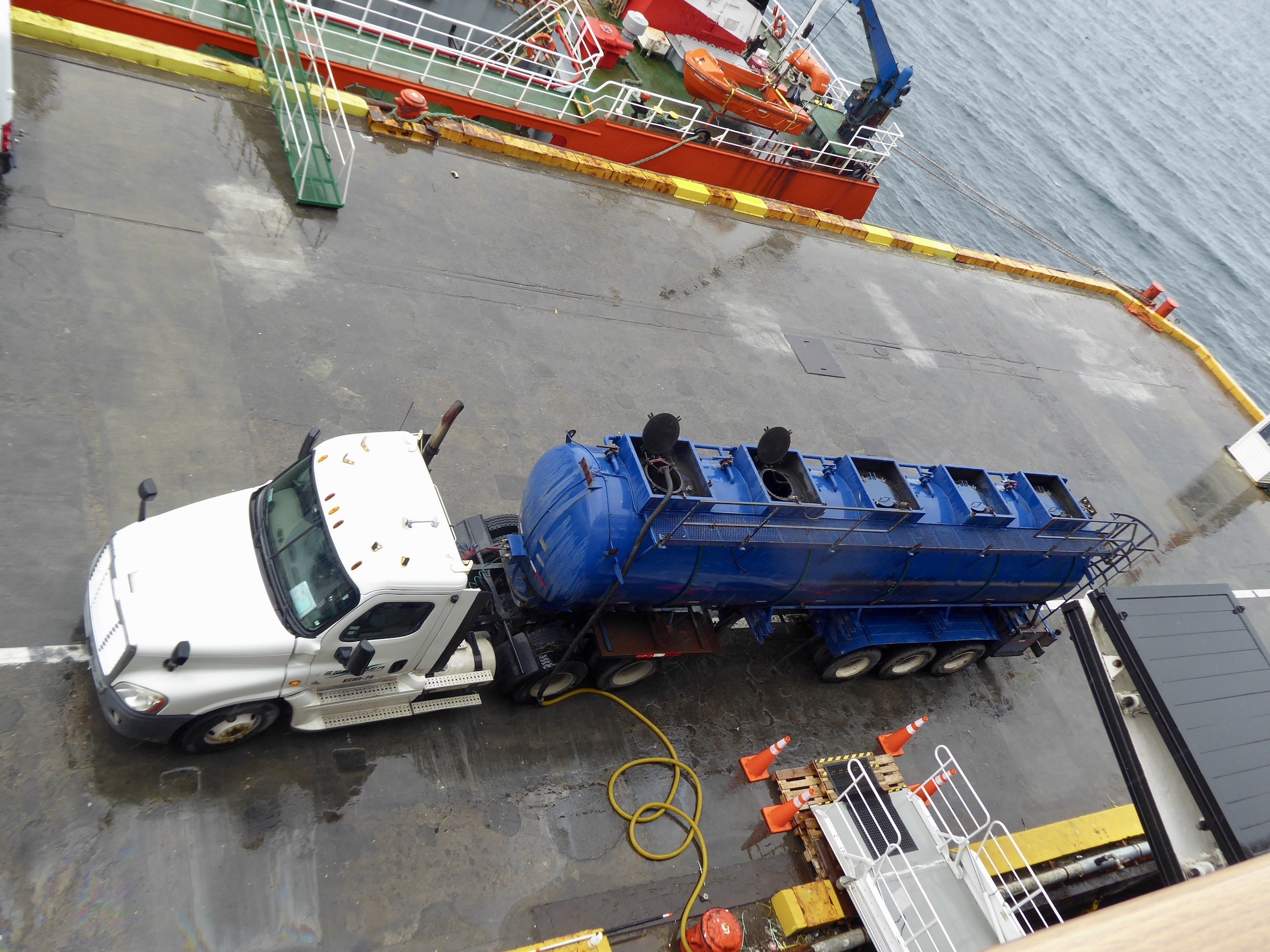 Then the food for digestive processing arrives. Yesterday were the staples, while they’re loading fresh produce this morning.

Doritos!  I haven’t seen a Dorito this whole trip! Perhaps they’re reserved for the “suite passengers”, who have their own special dining room (they served reindeer there last night).

The veggies were delivered this morning. I spot romaine lettuce, tomatoes, pineapples, and “camote” (Filipino for sweet potatoes). If you have a keen eye, perhaps you can see other produce. 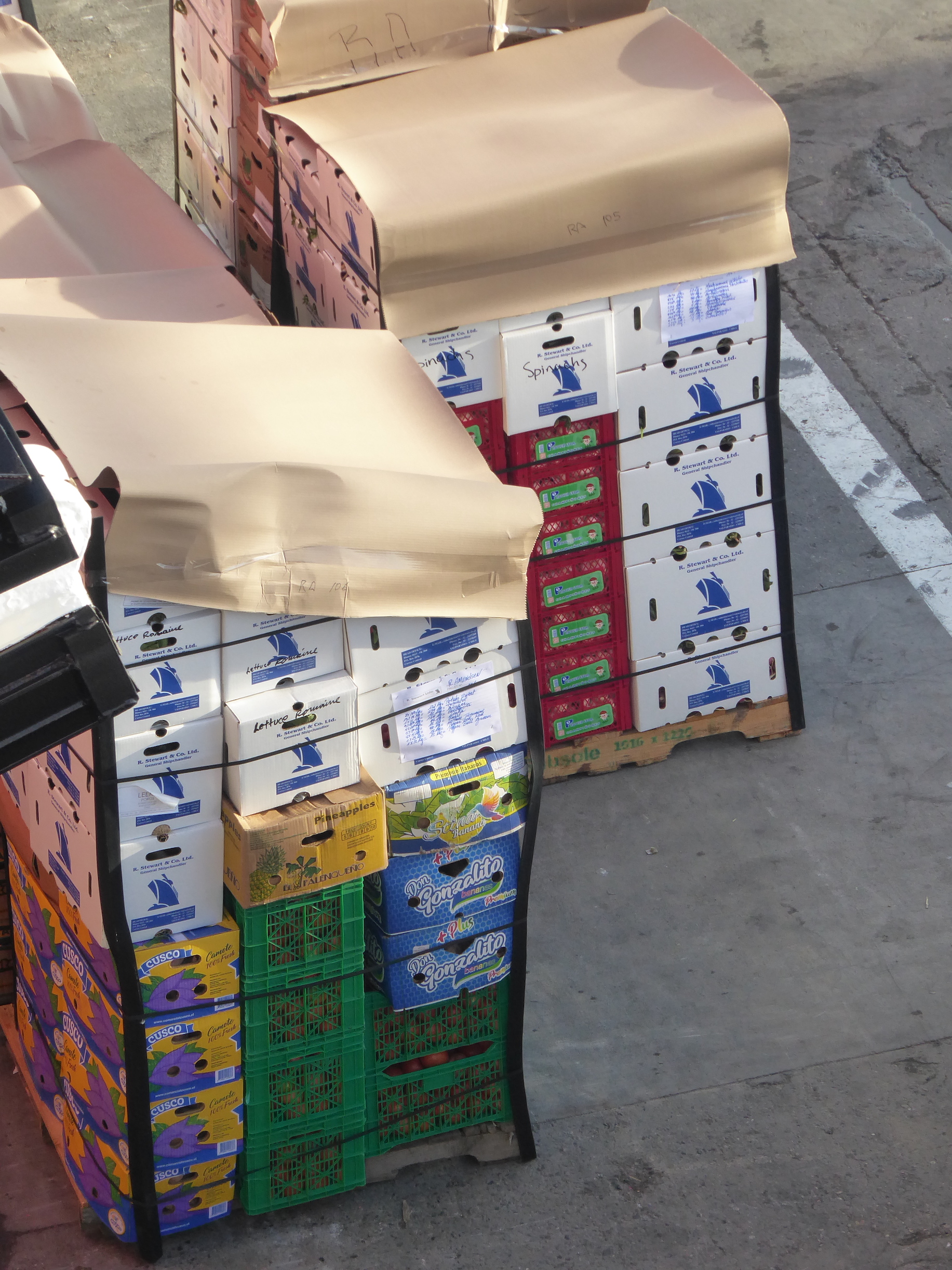 The loading is very efficient. Pallets of food are taken off the trucks with one of these mini-lifters, and then transferred to a swinging arm from the ship that simply slides the pallets into the bowels of the ship, where other mini-trucks store them. The swinging arm is the yellow-and-black striped platform below:

The harbor is very colorful. At least here, the ships and port facilities are painted in bright colors: 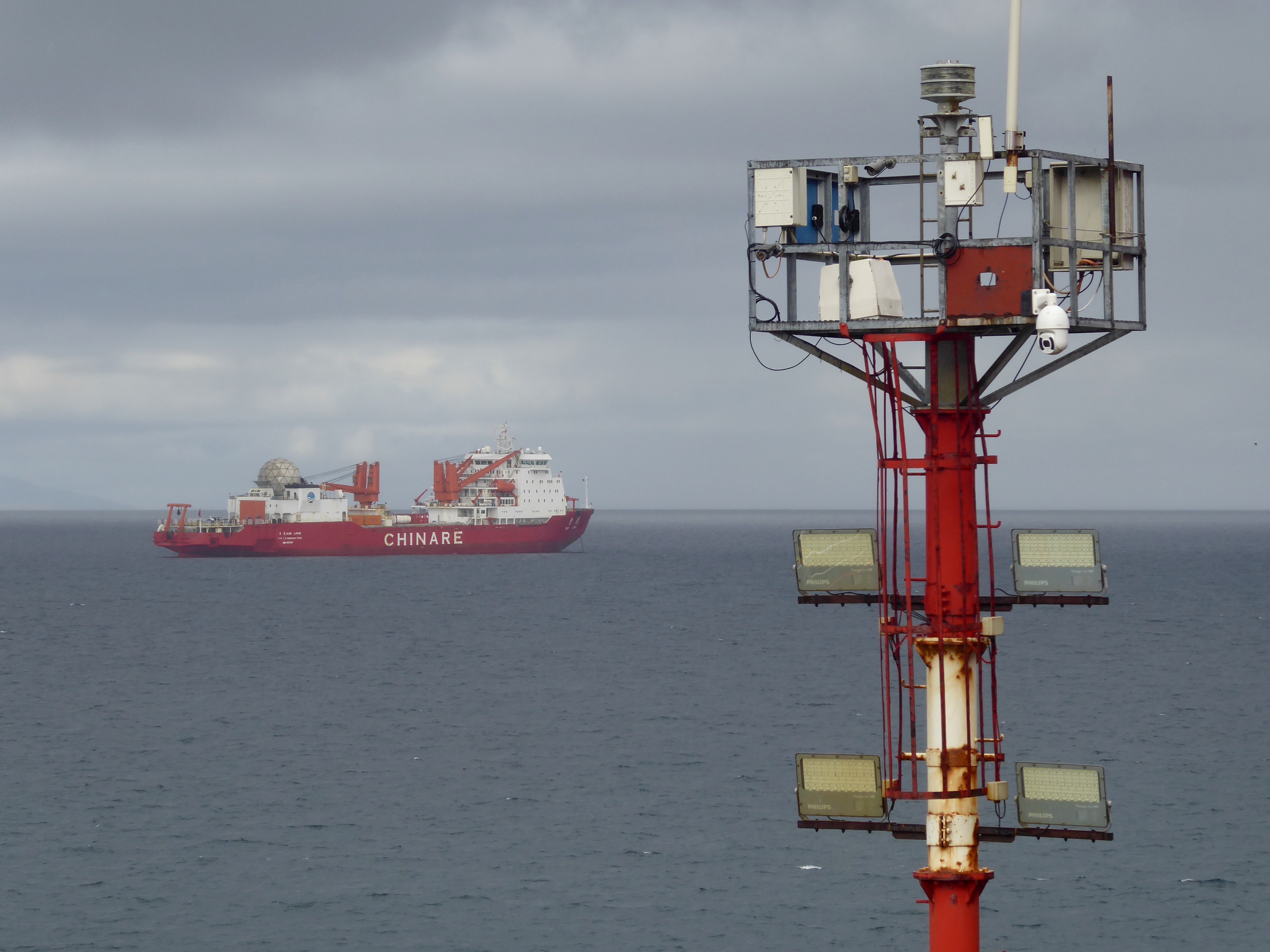 There were some curiously ducklike birds floating in a group behind a fishing boat moored nearby. I couldn’t get close because we’re not allowed to leave the ship, so I photographed them at high magnification.

I asked our resident bird expert Lancey what they were, and he told me that they were “Fulham’s Giant Petrel”.  But no bird is listed under that name; instead, one finds that these  are Southern Giant Petrels (Macronectes giganteus), described by Wikipedia as “also known as the Antarctic giant petrel, giant fulmar, stinker, and stinkpot,” I suppose the  “stink” part of the name comes from this: “Giant petrels are extremely aggressive predators and scavengers, inspiring another common name, the stinker.” But it could also come from this habit of this species and its congener (see below):

They produce a stomach oil made up of wax esters and triglycerides which is stored in the proventriculus. This can be sprayed out of their mouths as a defence against predators and as a protein-rich food source for chicks and for the adults during their long flights.

There are only two species in its family  Procellariidae, the other being the Northern Giant Petrel,(M. halli) which is a bit smaller and not really “northern”, as it’s also found only south of the Equator and its range overlaps broadly with that of the stinkpot:

These are big birds, described by Wikipedia this way: 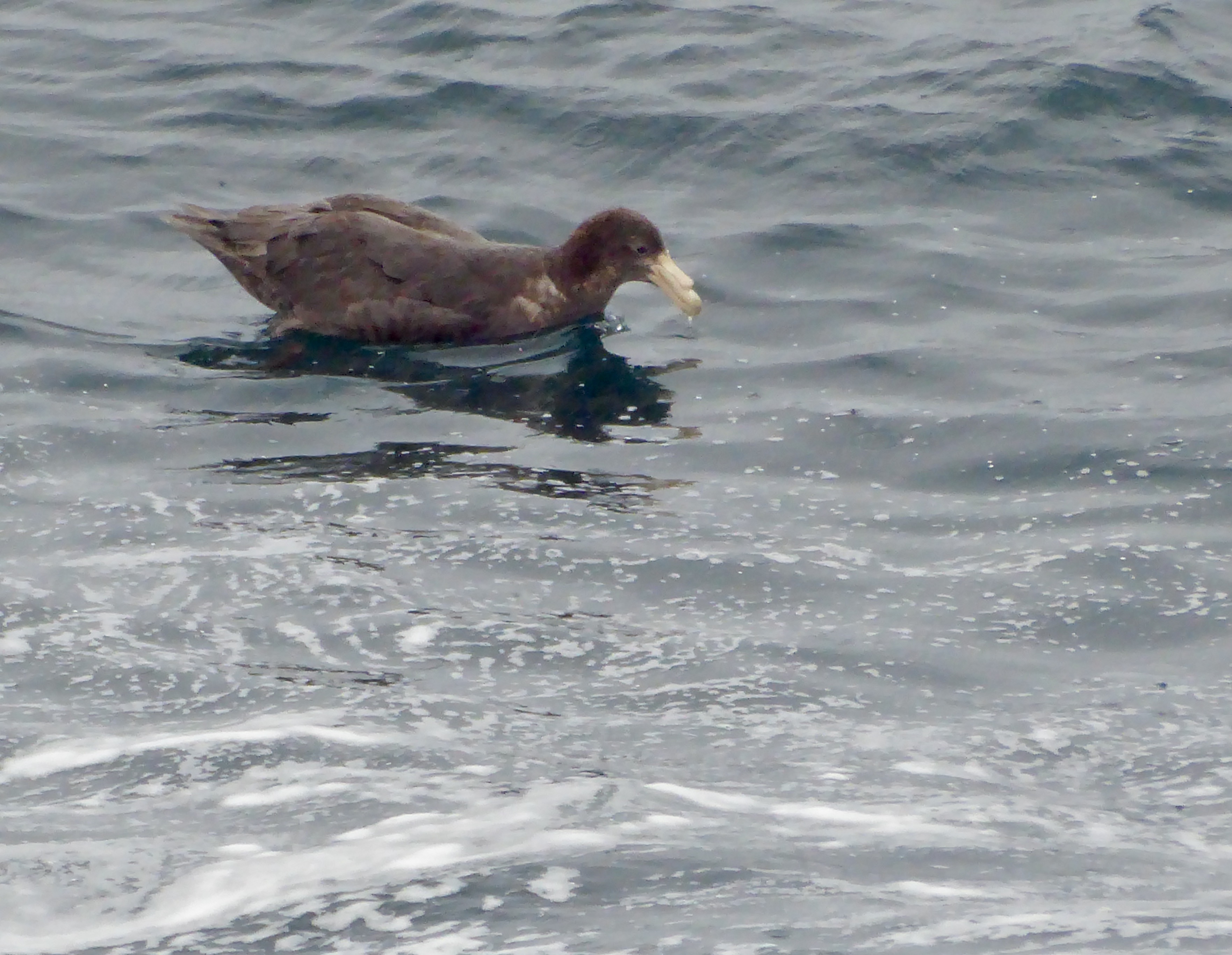 Those are big birds, much larger than mallards! And what about that weird structure on the upper bill?

. . . [The stinkpot] like all members of the Procellariiformes, have features that set them apart from other birds. First, they have nasal passages called naricorns, that attach to the upper bill. The nose holes on the petrels are on the top of the bill.

This source explains further and gives a photo:

The large, strong bill is flesh-coloured with darker greyish to greenish-grey tip. It is surmounted by a large, single nostril-tube. 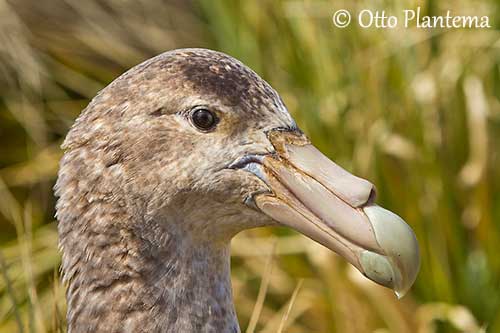 A photo of an adult and chick from Wikipedia: 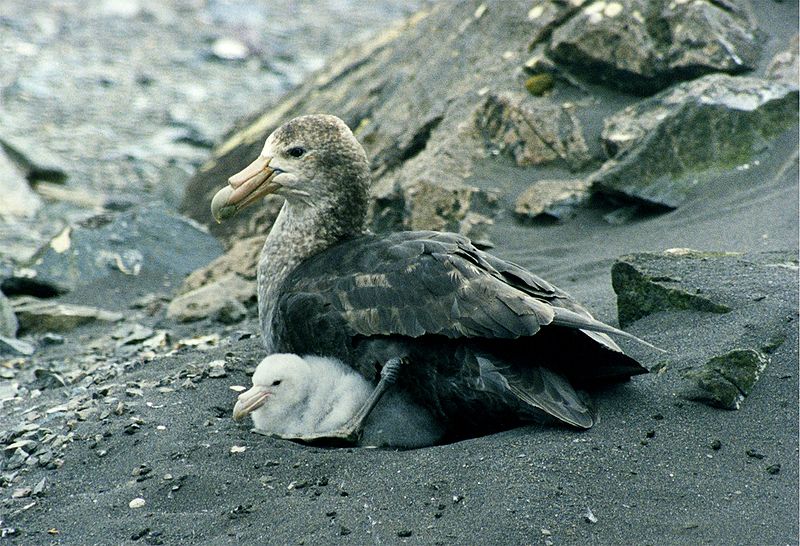 A stinkpot in flight (also from Wikipedia). They’ll eat anything dead or alive, and sometimes will even kill baby penguins, which makes them miscreants. 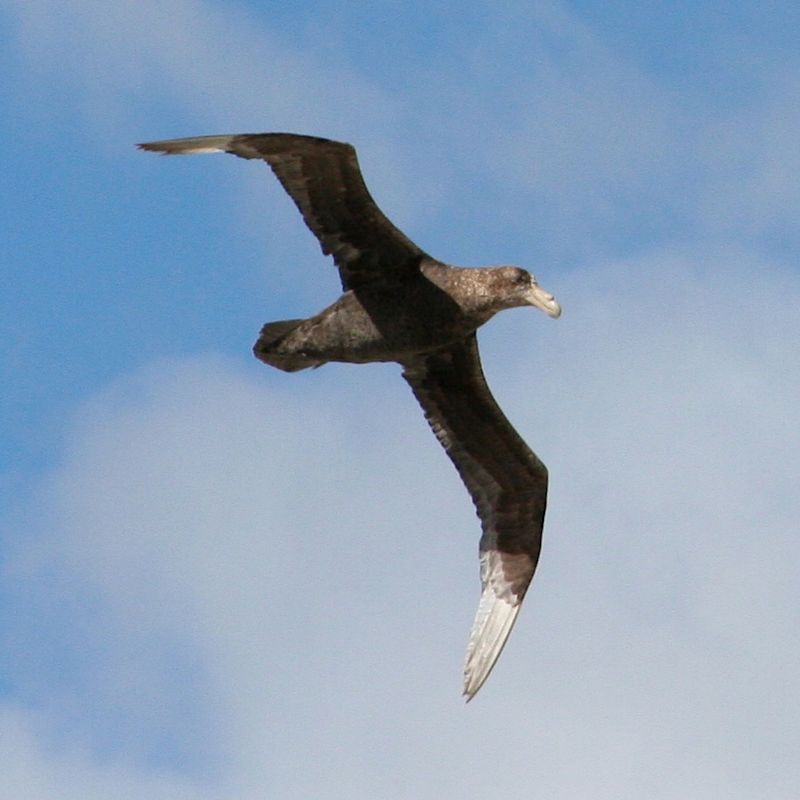 Finally, my dinner last night (I had no lunch and a light breakfast). First, chicken skewers with satay sauce and chili sauce. 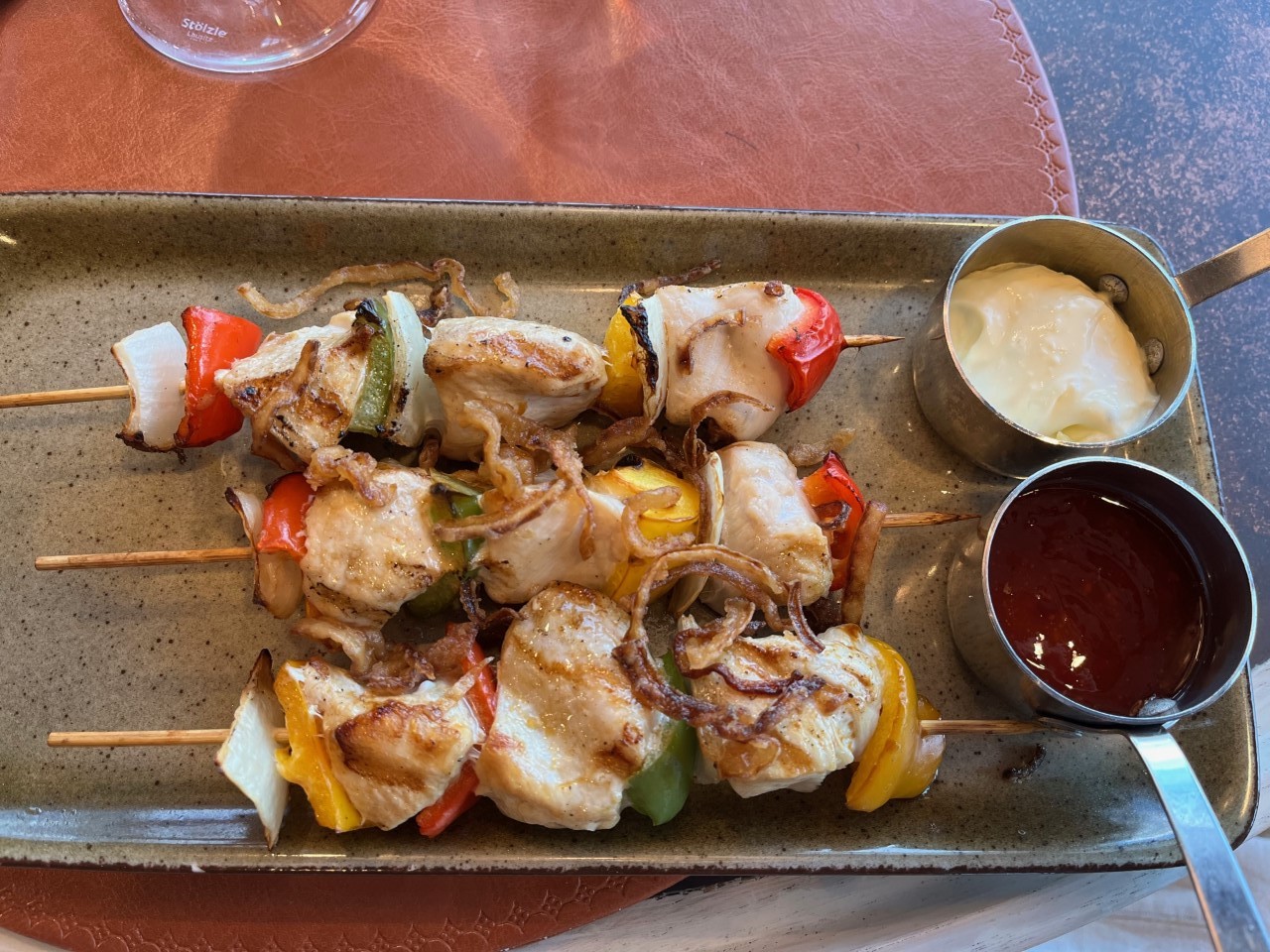 That wasn’t filling enough, so I ordered a lamb sausage with fries (and a beer, of course): 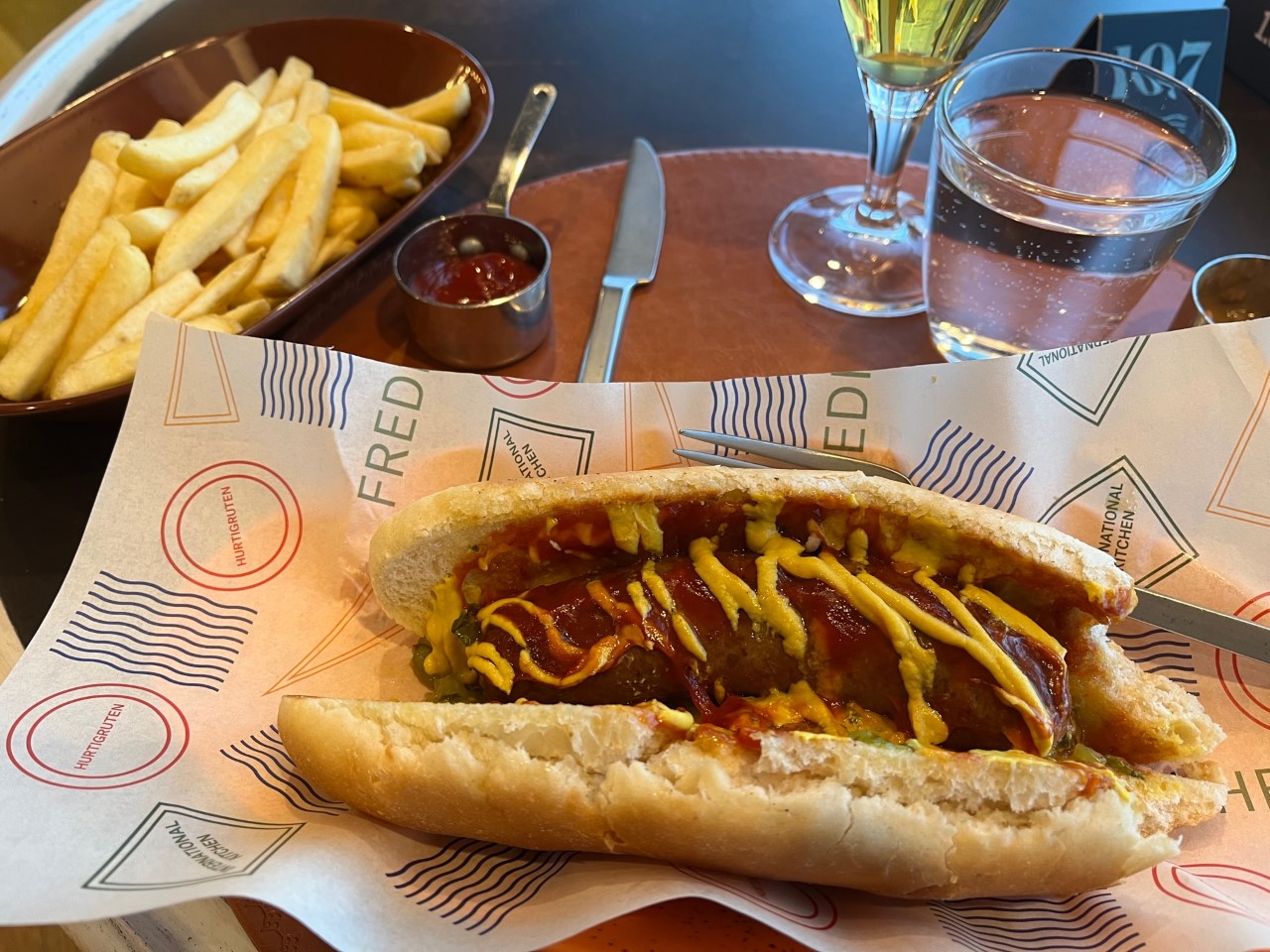 For dessert: Sveler (Norwegian pancakes) with “homemade trollcream made with lingonberries and eggwhites.” That was enough food! 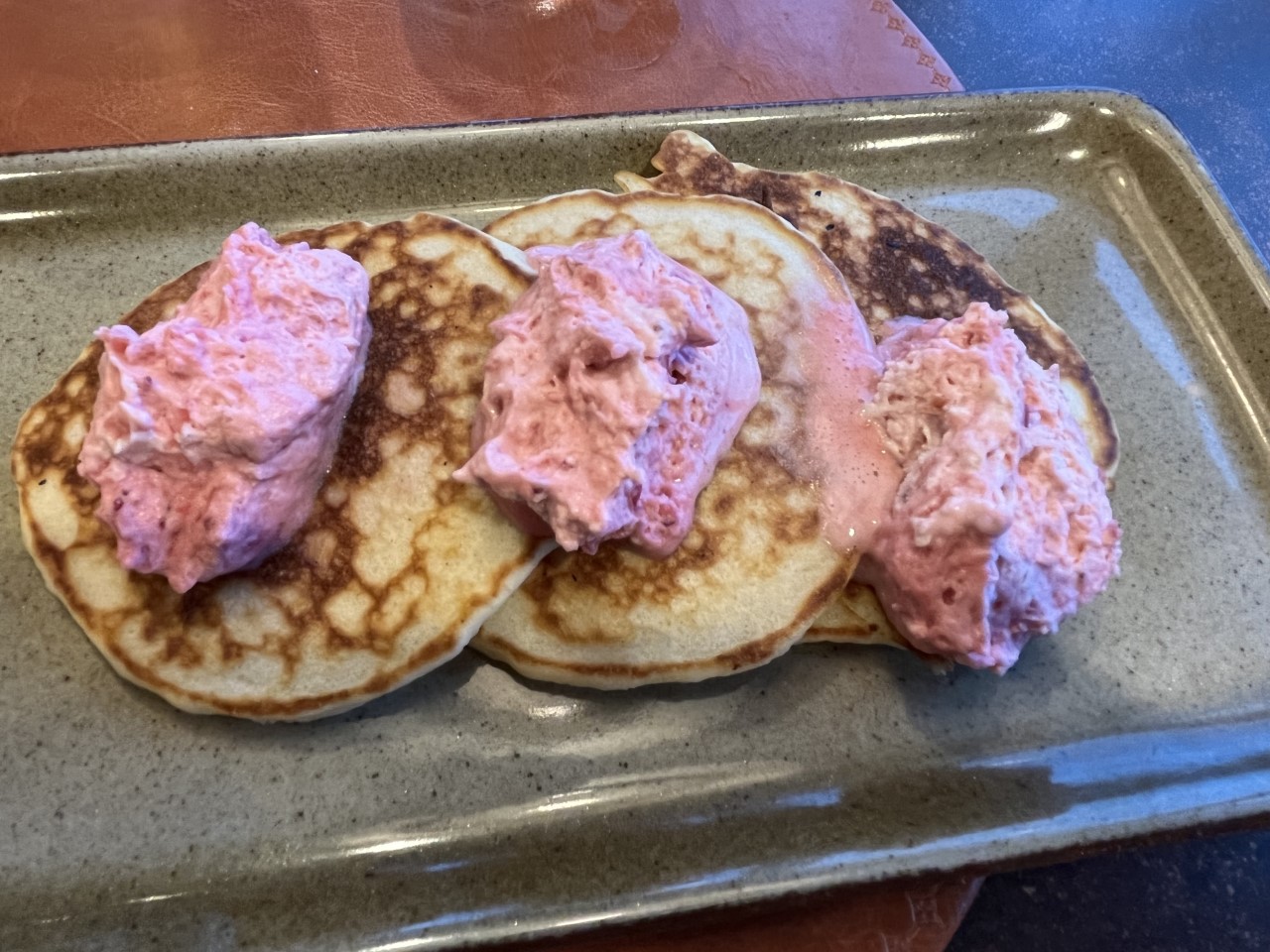 19 thoughts on “Antarctica, Day 15: Cooling our jets in Punta Arenas and turning the ship around”