To give stymied passengers a treat, the Expedition Leader decided to take us up a Patagonian fjord: the Garabaldi Fjord, created by the Garibaldi Glacer at its beginning. Hurtigruten has its own page on the Fjord since its ships sometimes top there:

One of the most important things to see in Garibaldi fjord is the retreating Garibaldi glacier. Regarded as one of Chile’s most beautiful glaciers, this mammoth wall of sapphire and teal-colored ice doesn’t disappoint, as it towers over visitors.

You can see the medial moraine in the photos below. Another site says this:

A prime specimen of the region, Garibaldi Fjord is known for its beautiful glaciers, which rise as tall as New York skyscrapers. The glaciers extend across a series of steep mountains and valleys, but they still harbor a rich ecosystem of plants and wildlife. As your ship passes by the fjord, watch for Andean condors, sea lions, Magellanic penguins and possibly even a pod of orcas. If you’re lucky, you’ll see a glacier splinter and calve, dropping an enormous chunk of ice into the sea. Fun fact about glacial ice: It has no air in it, so if you put a piece in a drink, it will sink to the bottom rather than float. Some glacial ice has remained in a frozen state for tens of thousands of years.

That’s true, but not all glacial ice is airless: some has bubbles in it and will float.

Here’s the location: off the Beagle Channel:

The view from my balcony when I woke up; we were parked at the mouth of the fjord. 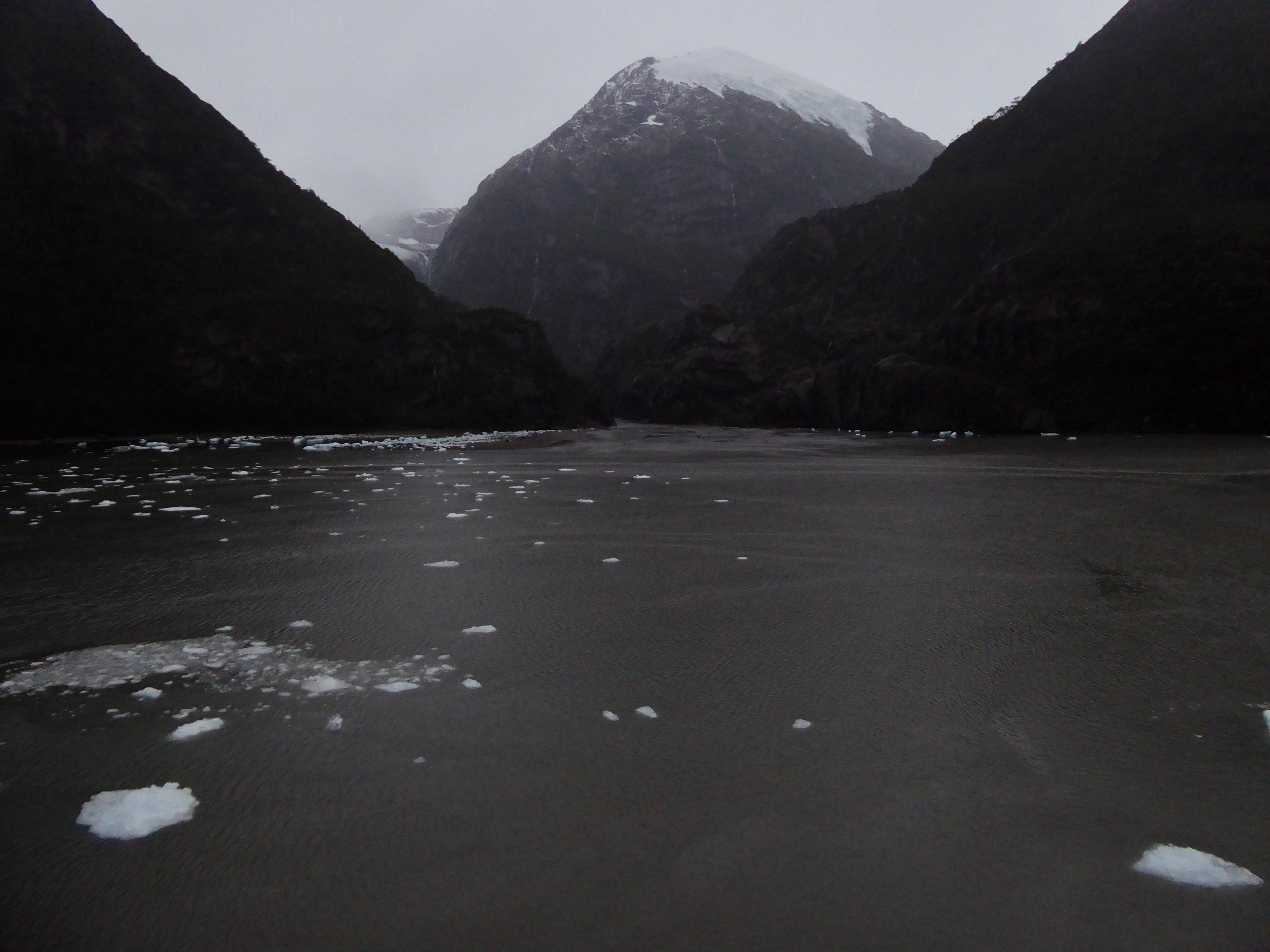 As she ship sailed into the channel, you could see the glacier, which our expert tells us that (in contrast with many glaciers in the area) has actually gotten larger in the last decade.

You can see the medial moraine as the line of rocks where the two glaciers meet. This was again from my balcony. What a view to wake up to! 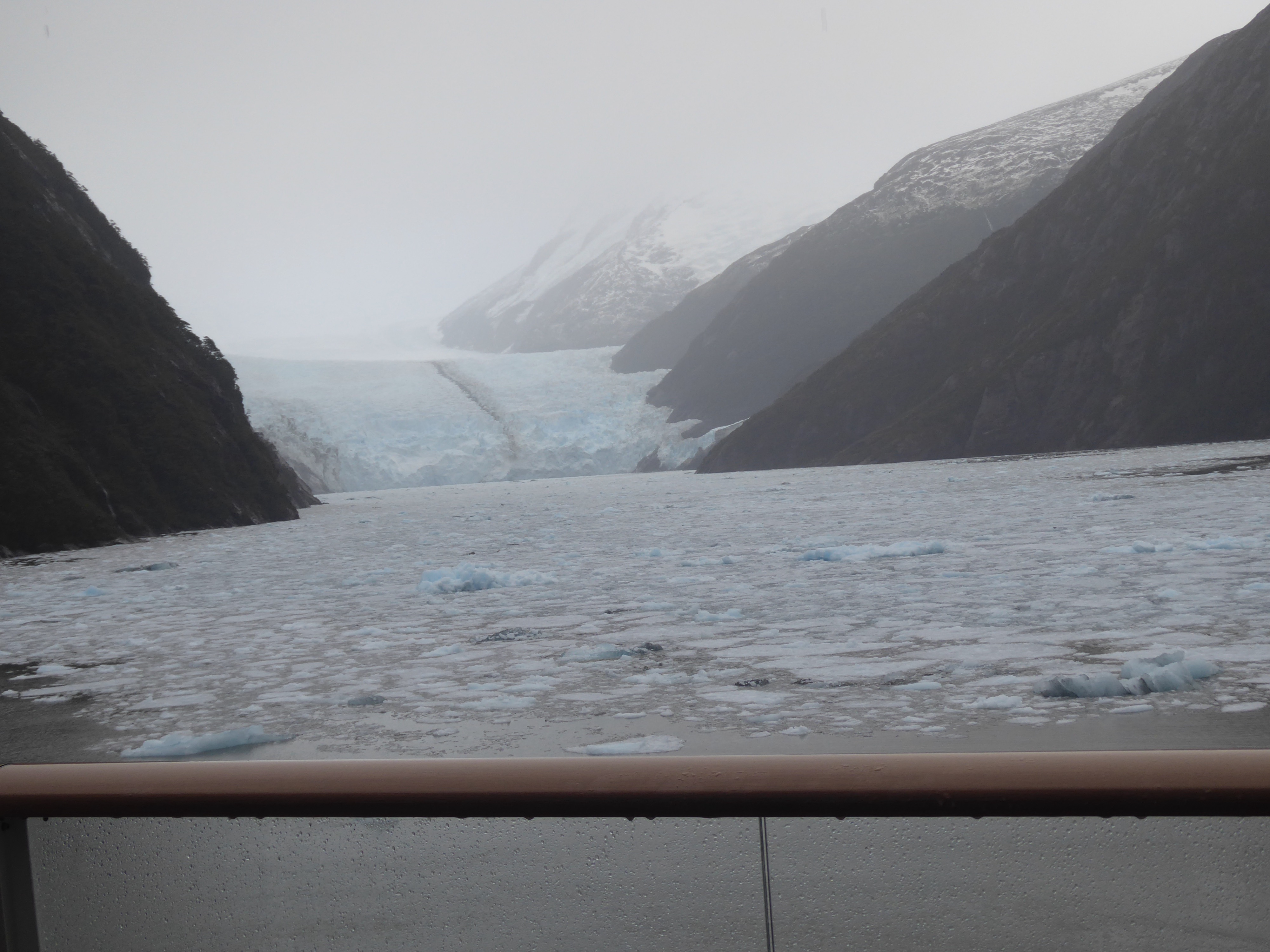 And then out on deck to get some photos with my Panasonic Lumix. The channel was clogged with ice that fell of the glacier in small bits, agglomerating into larger bits. We had hoped to get closer to the glacier before launching the Zodiacs, but this didn’t look good. 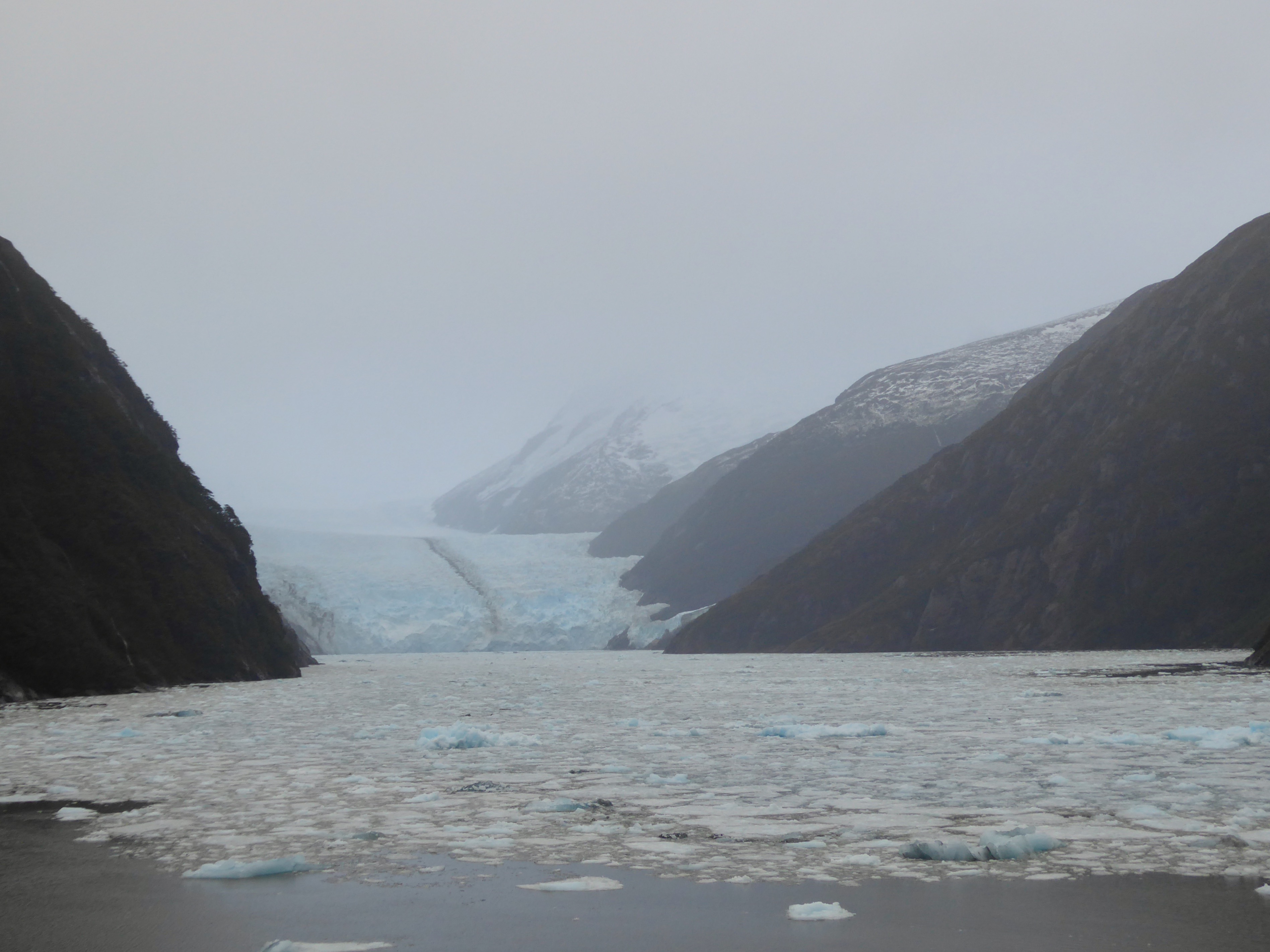 A better view of the medial moraine. I bet you haven’t seen one of these before! 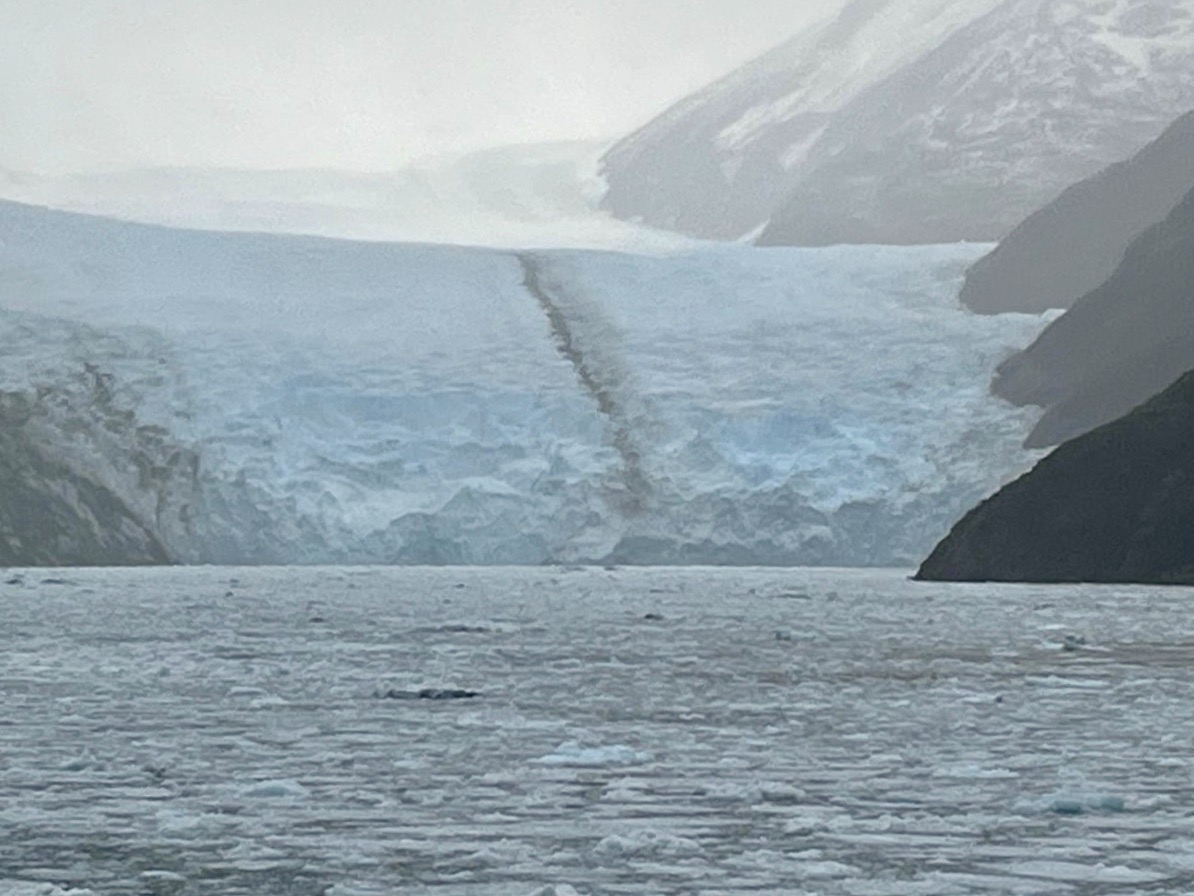 And a closeup with extended zoom. There’s clearly a line of rocks where the glaciers meet. 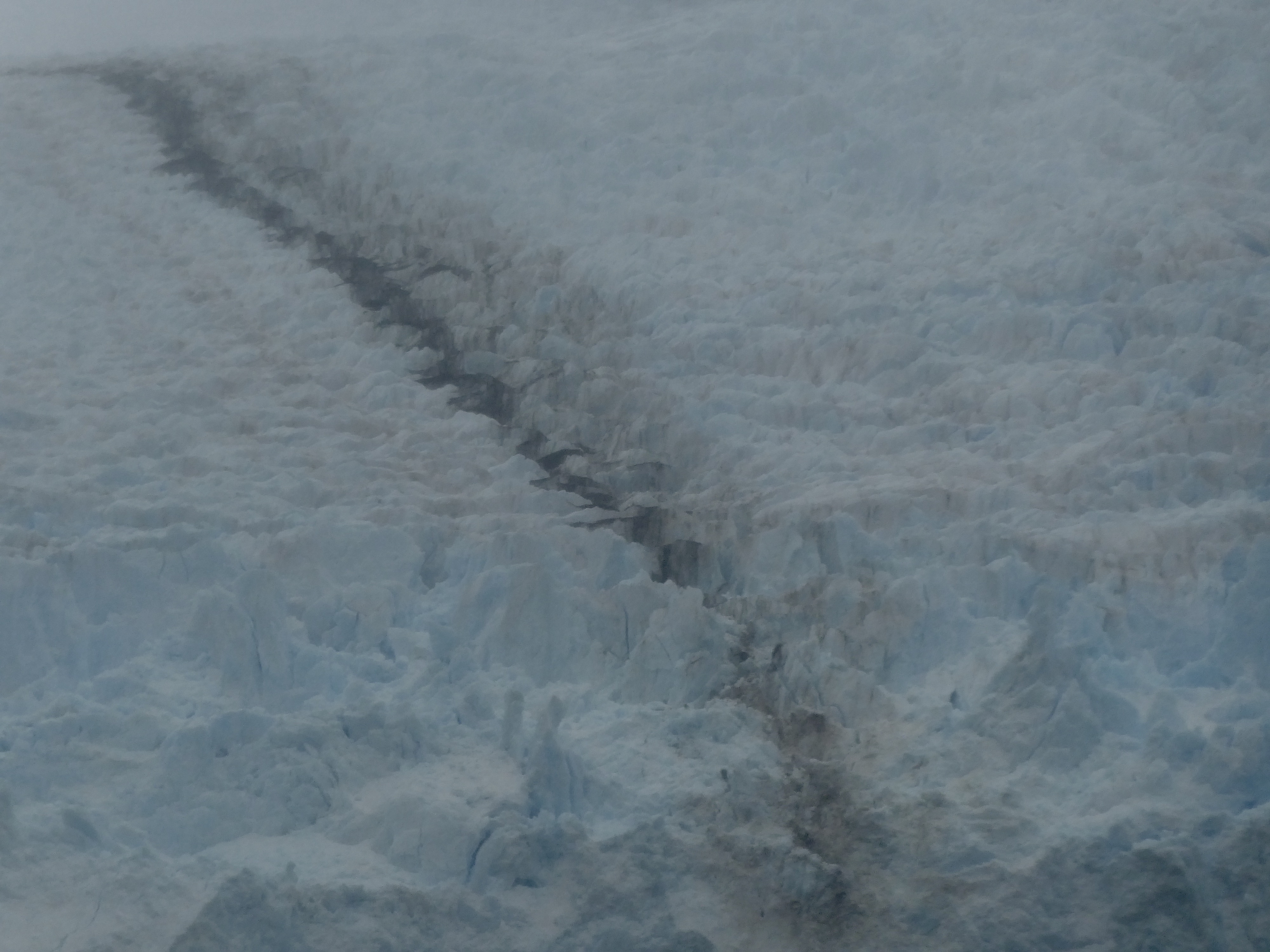 And so we got as close to the glacier as we could before we launched the Zodiacs. It was cold and rainy, so I put my camera inside a sealed plastic bag, pulling it out briefly from time to time to take a shot. But I forgot my gloves, as well, so my hands froze. 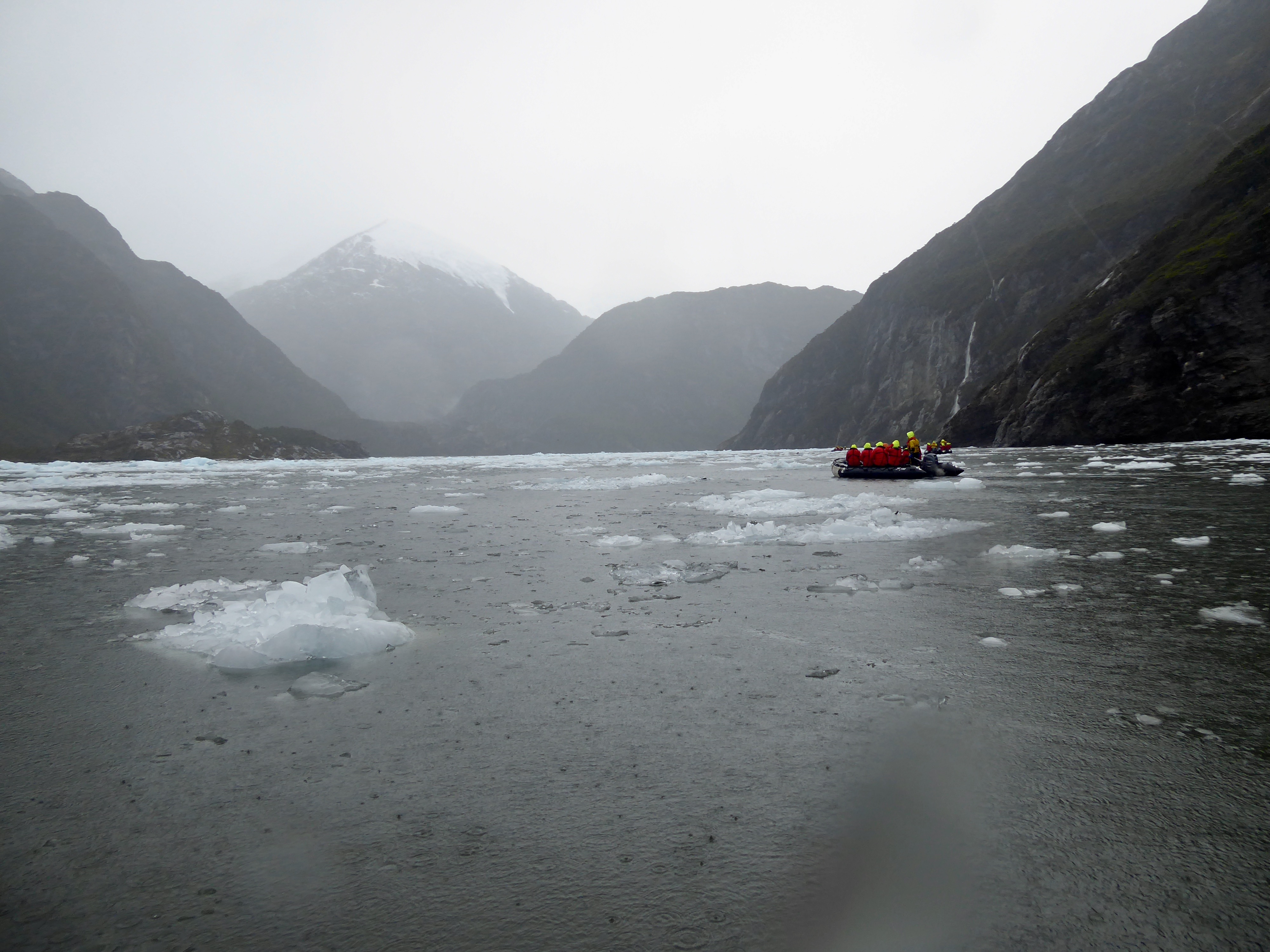 You can see how the ice nuggets from the glacier accumulate into floating mats: 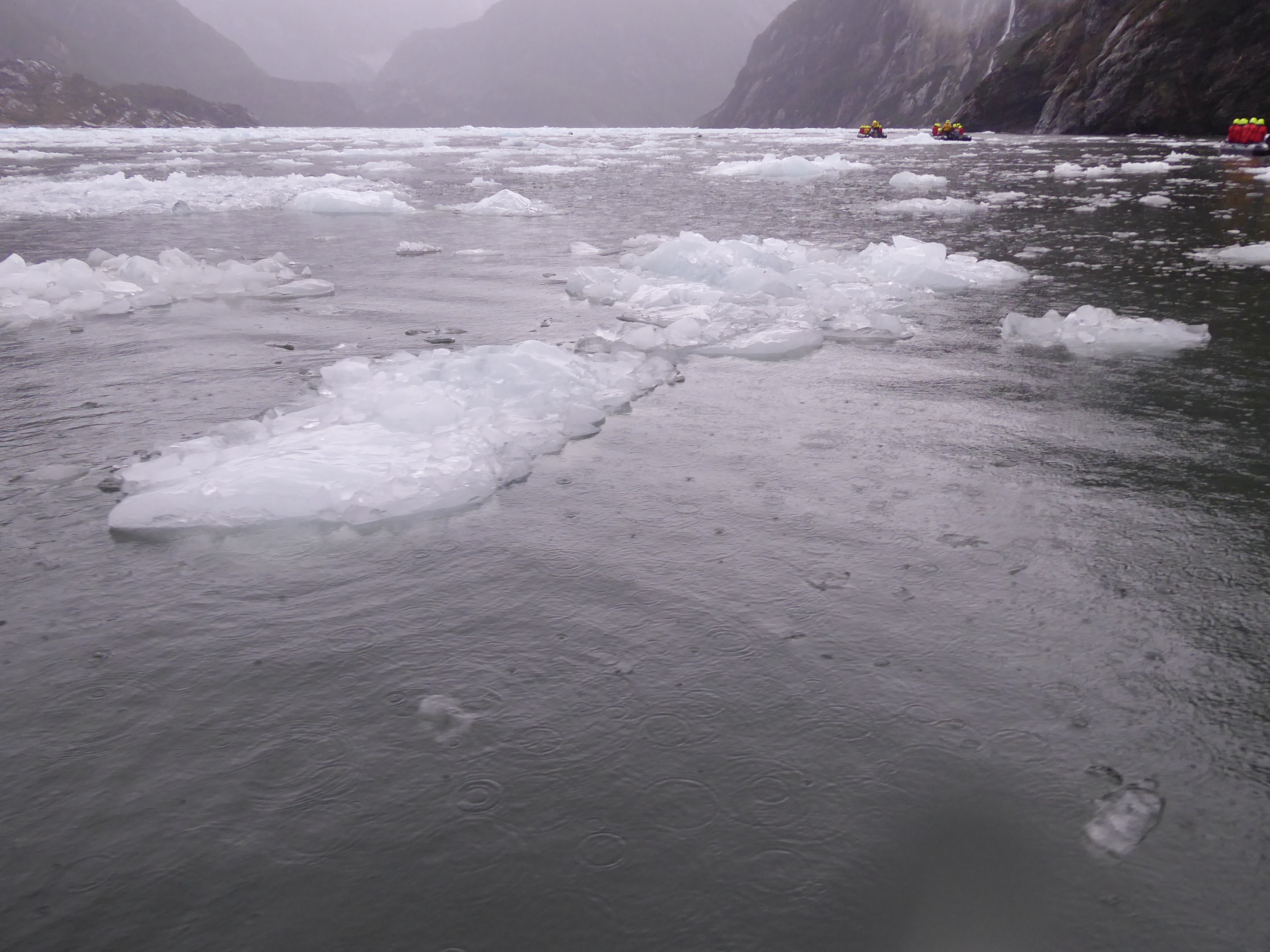 The ship docked while we traipsed about in the rubber boats. The fjord is lined with many lovely waterfalls that come from other glaciers up above: 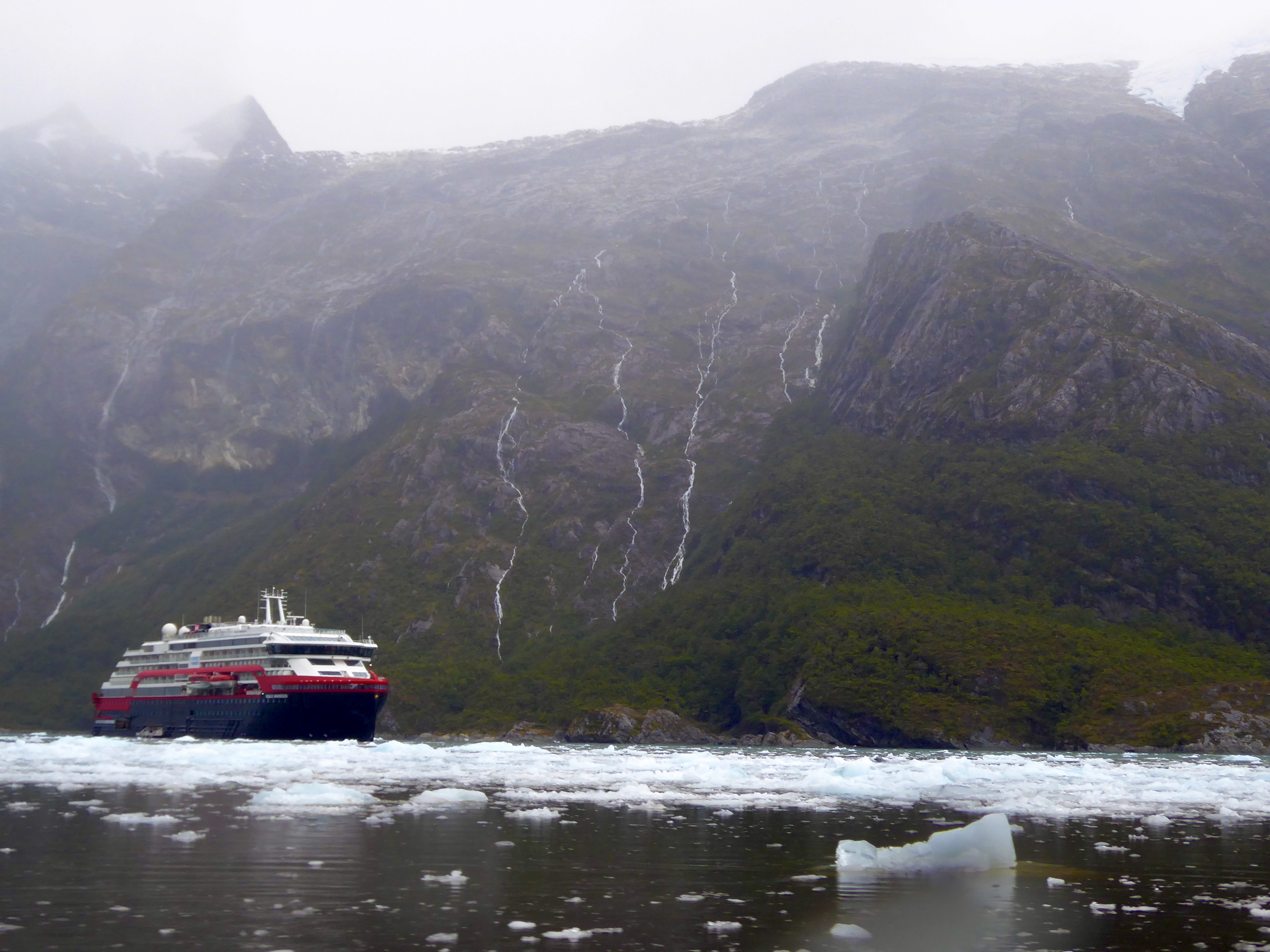 Although the Zodiac driver said he saw a seal popping its head above the surface from time to time, I saw no animals save this colony of birds, identified as Imperial Shags (Leucocarbo atriceps), a type of cormorant. 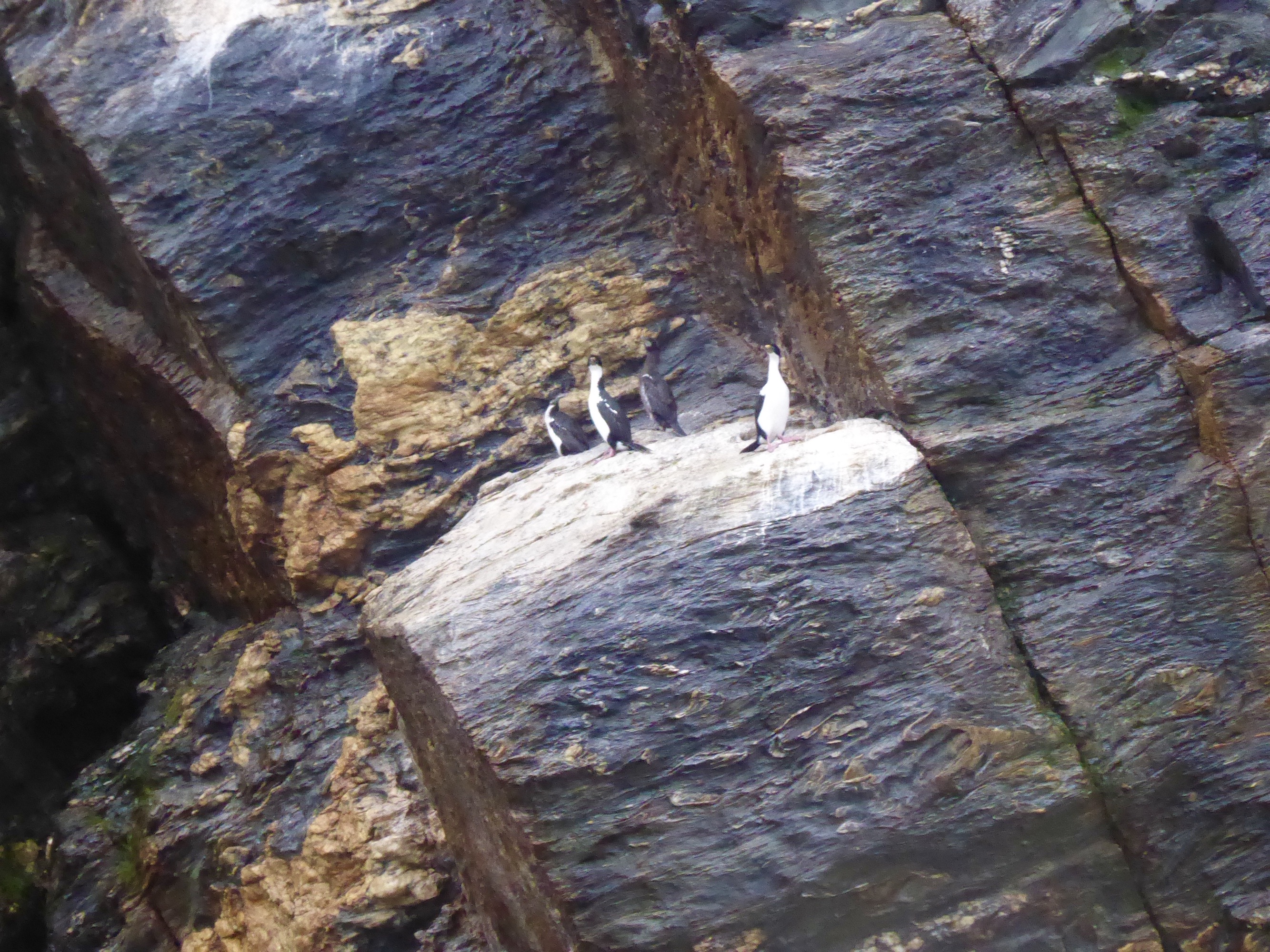 The photo above was taken at an extreme zoom magnification (30X) from a rocking Zodiac in the rain, so the results aren’t fantastic. The Imperial Shag is a handsome bird, though. Here’s a photo from Wikipedia: 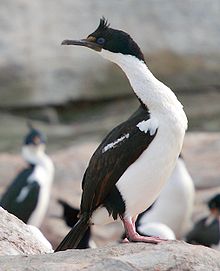 The waterfalls were gorgeous. As I said, the rain mandated that I keep my point-and-shoot in a plastic bag, pulling it out only for a few seconds at a time to frame and snap a photo. Even doing that I got water on the lens, clearly visible in the photo below. When I got back to my cabin, after thawing out my hands I used isopropyl alcohol and a microfiber cloth to get the water off my camera.

These waterfalls are very peaceful, and make a murmering sound as they hit the fjord: 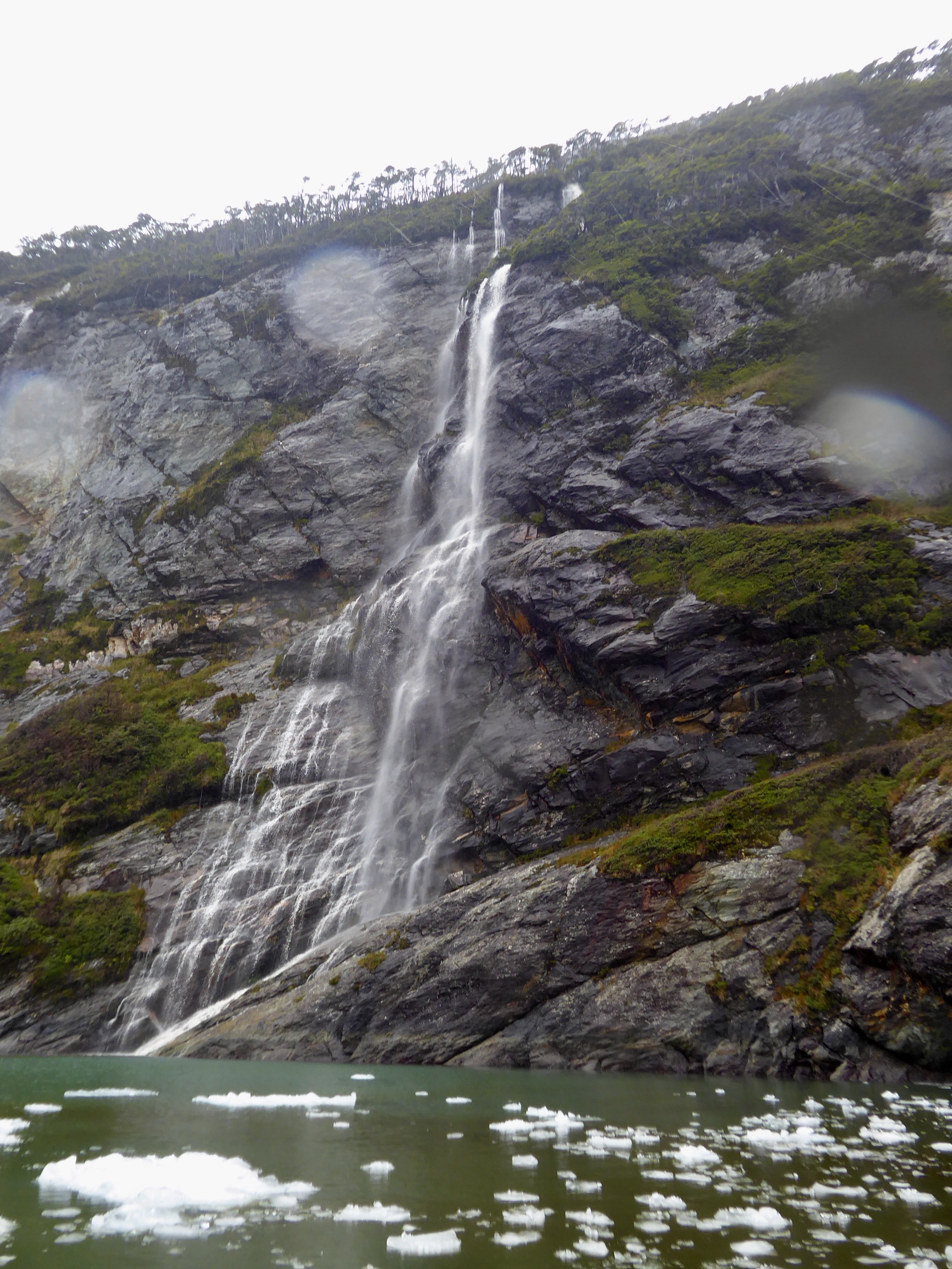 Rows and rows of hills: 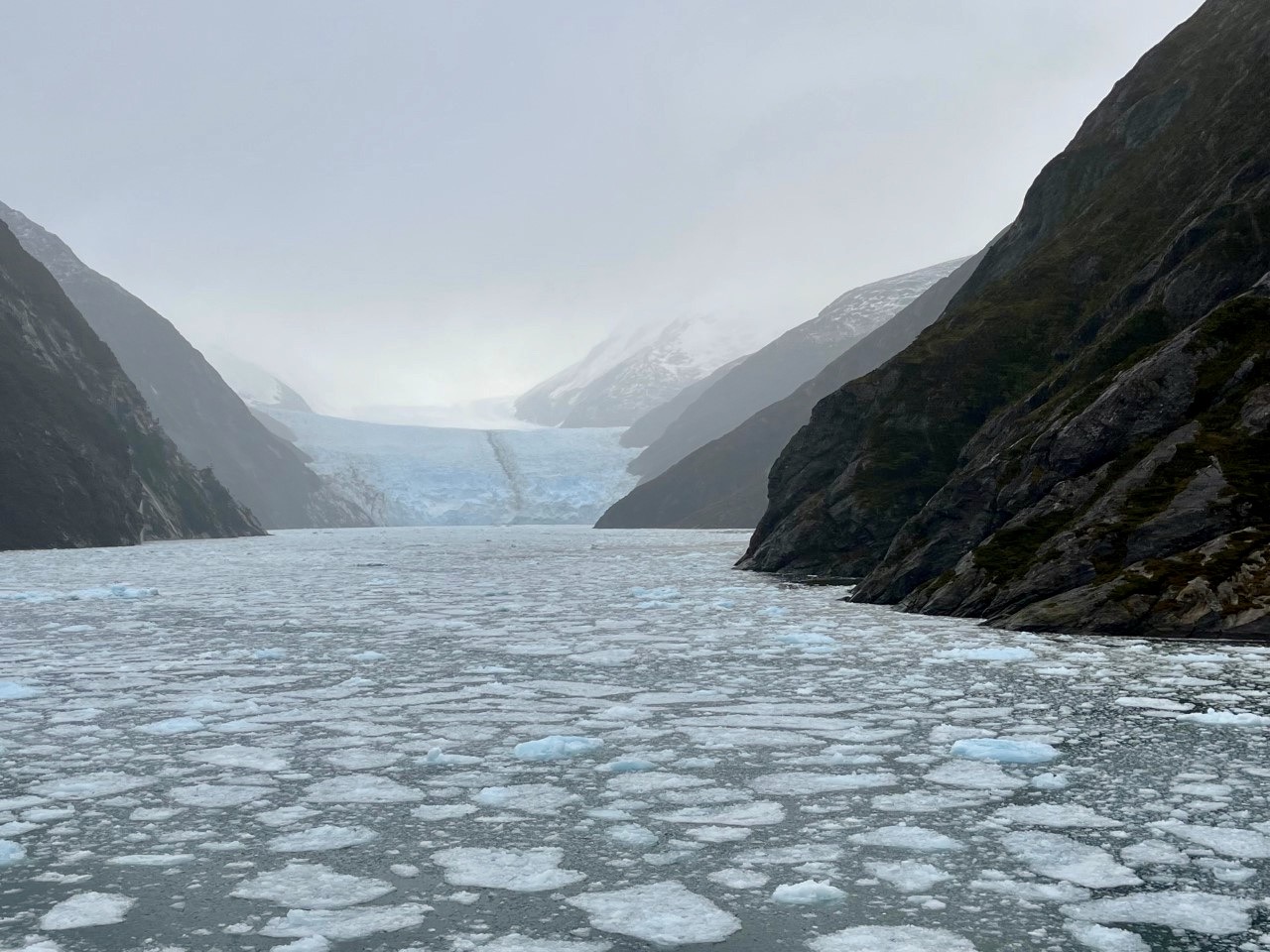 I like this photo because the textures and colors differ among the peaks. 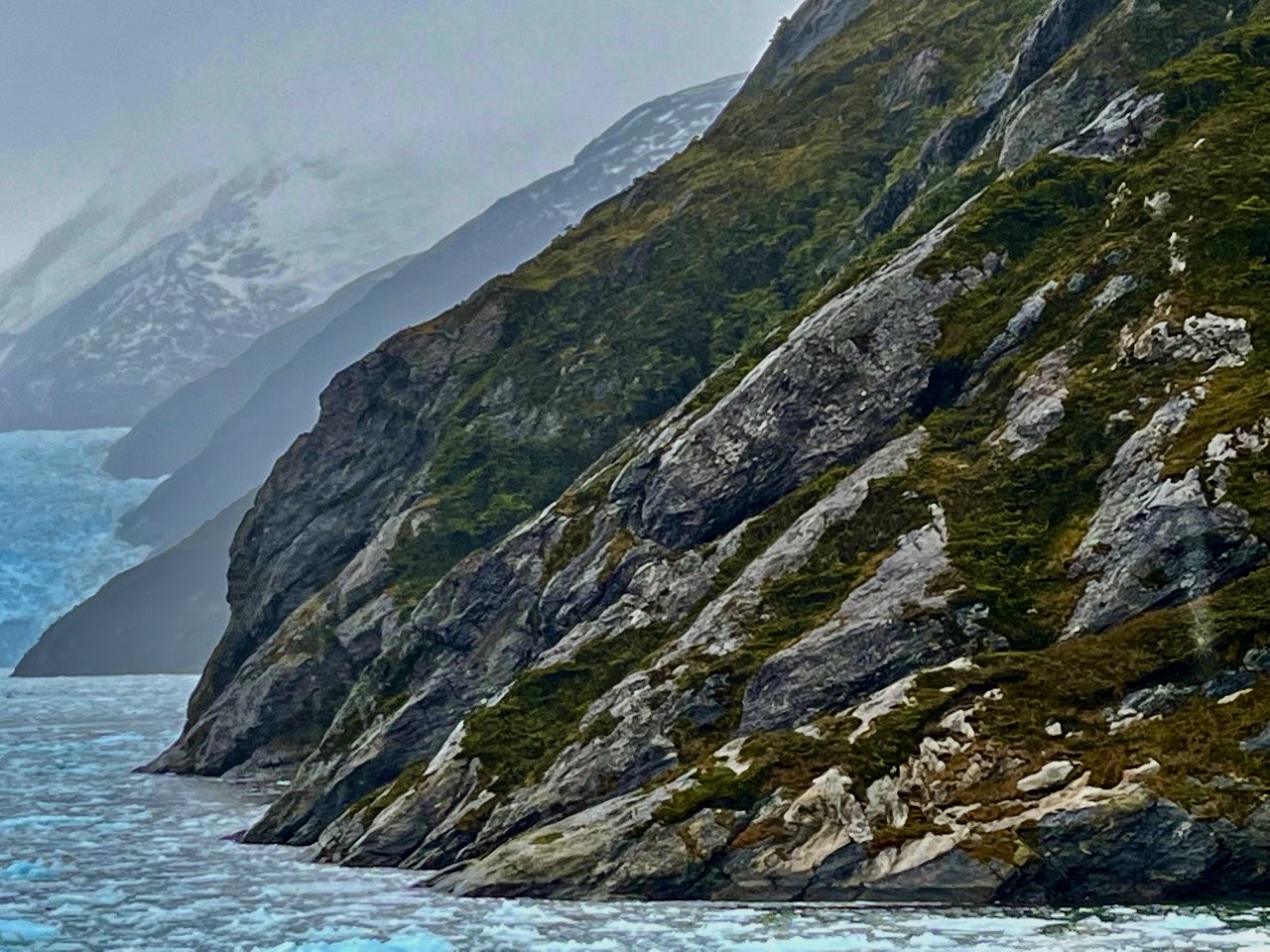 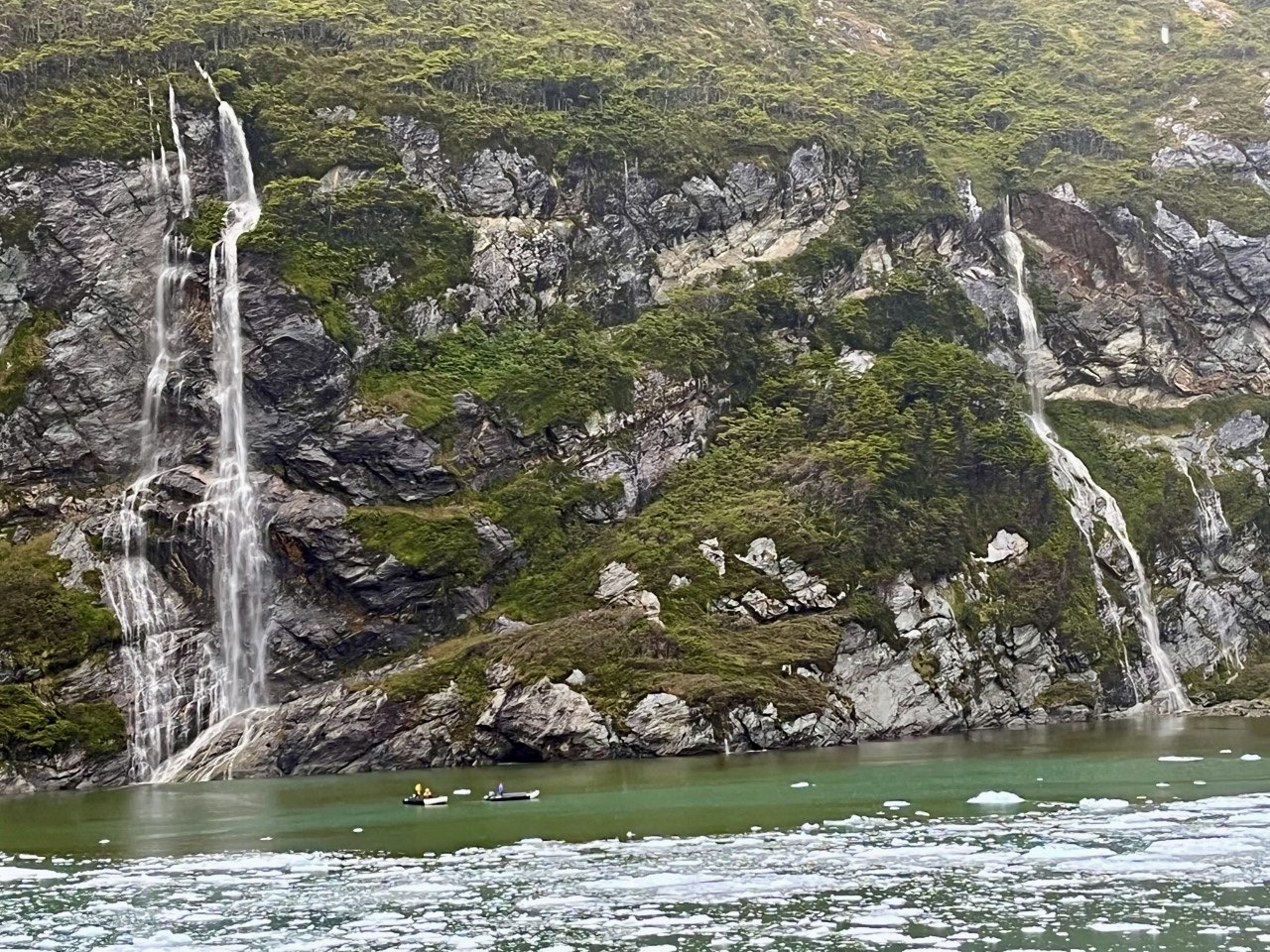 Puttering back to the ship. We had to go slowly because of all the ice. This Zodiac driver was also one of our naturalists on the expedition team: 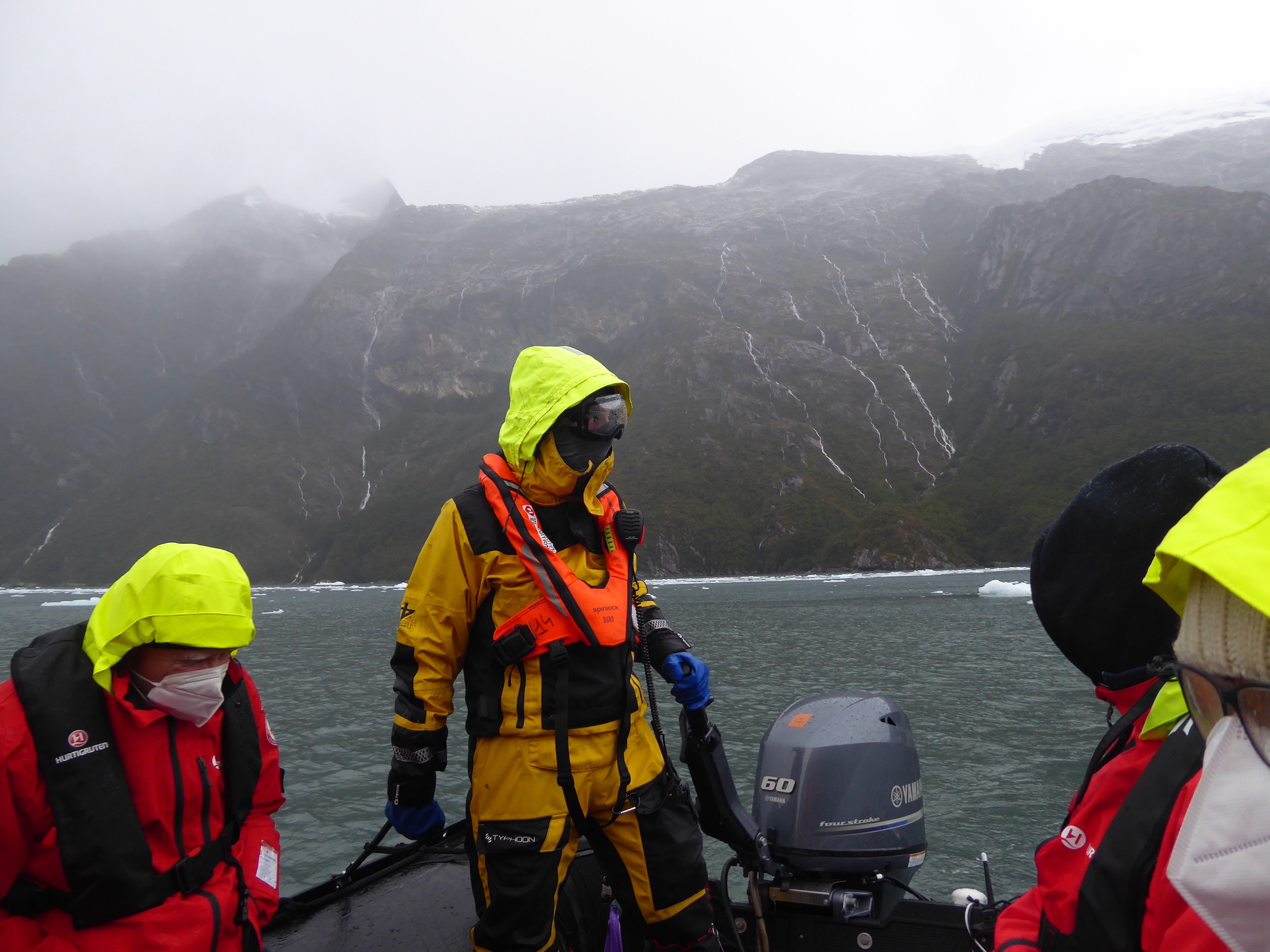 I was freezing, as I’d left my gloves behind thinking it would be warmer in the fjord, and because you can’t use a camera with them. It took a while to thaw my hands, and after a long, hot shower, it was time for lunch. I wanted a lunch today, which I often skip, because I wanted to see what was on offer in the fancy restaurant for non-suite passengers (the Aune). It was mixed:

Appetizers (I quote directly from the menu): “Ham hock terrine with horseradish creme fraiche, pickled beets and onion with rocket, grilled shrimp with marie rose, herbed cream cheese and chilled tomato pasta”. It was okay, but the melange didn’t go together: as Winston Churchill supposedly said of a dessert, “Take that pudding away; it has no theme.” 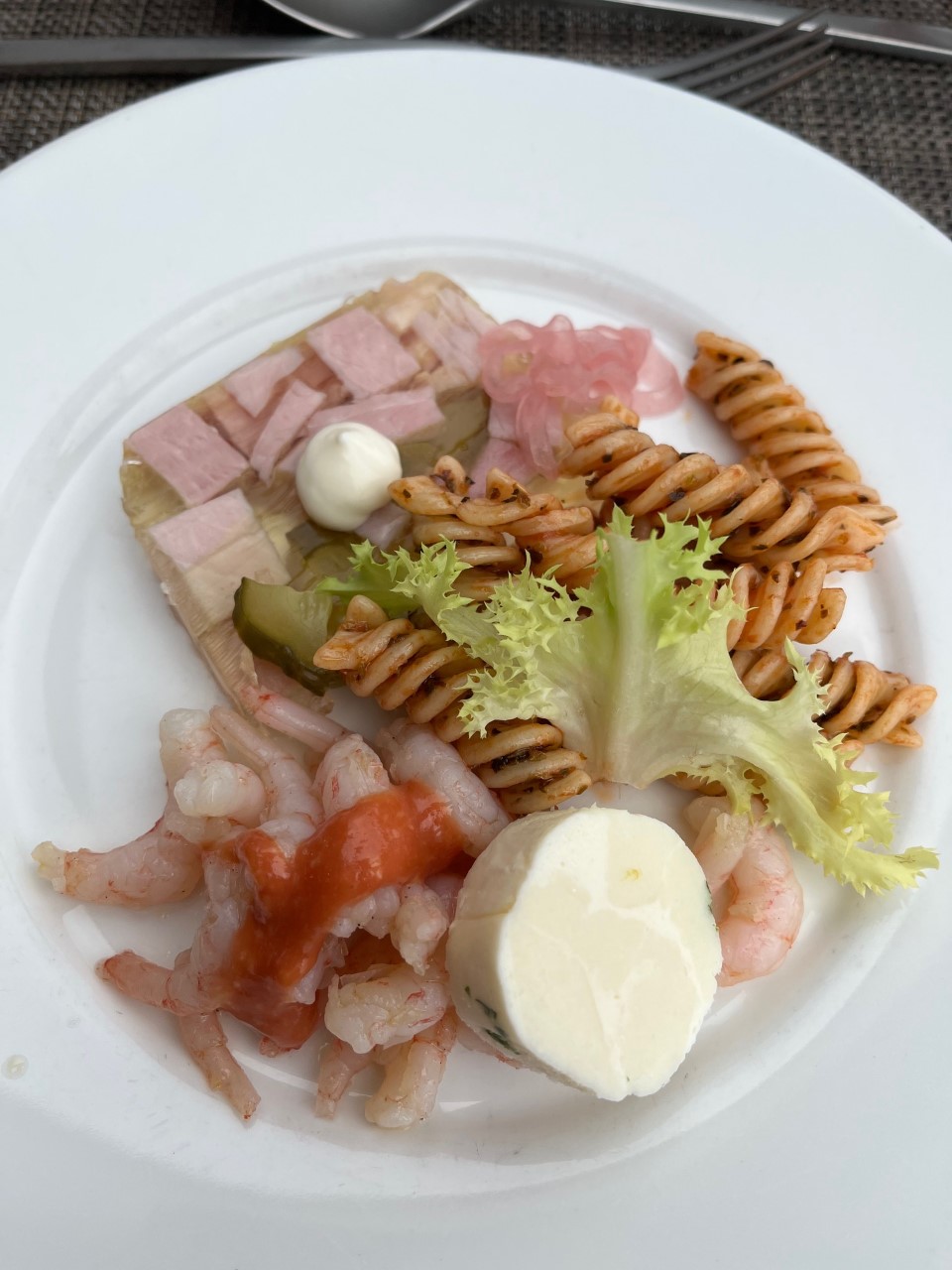 I’ve moved items aside so you can see the ham hock in aspic. In general (make that “all the time”), I’m not fond of items in aspic. This was no exception: 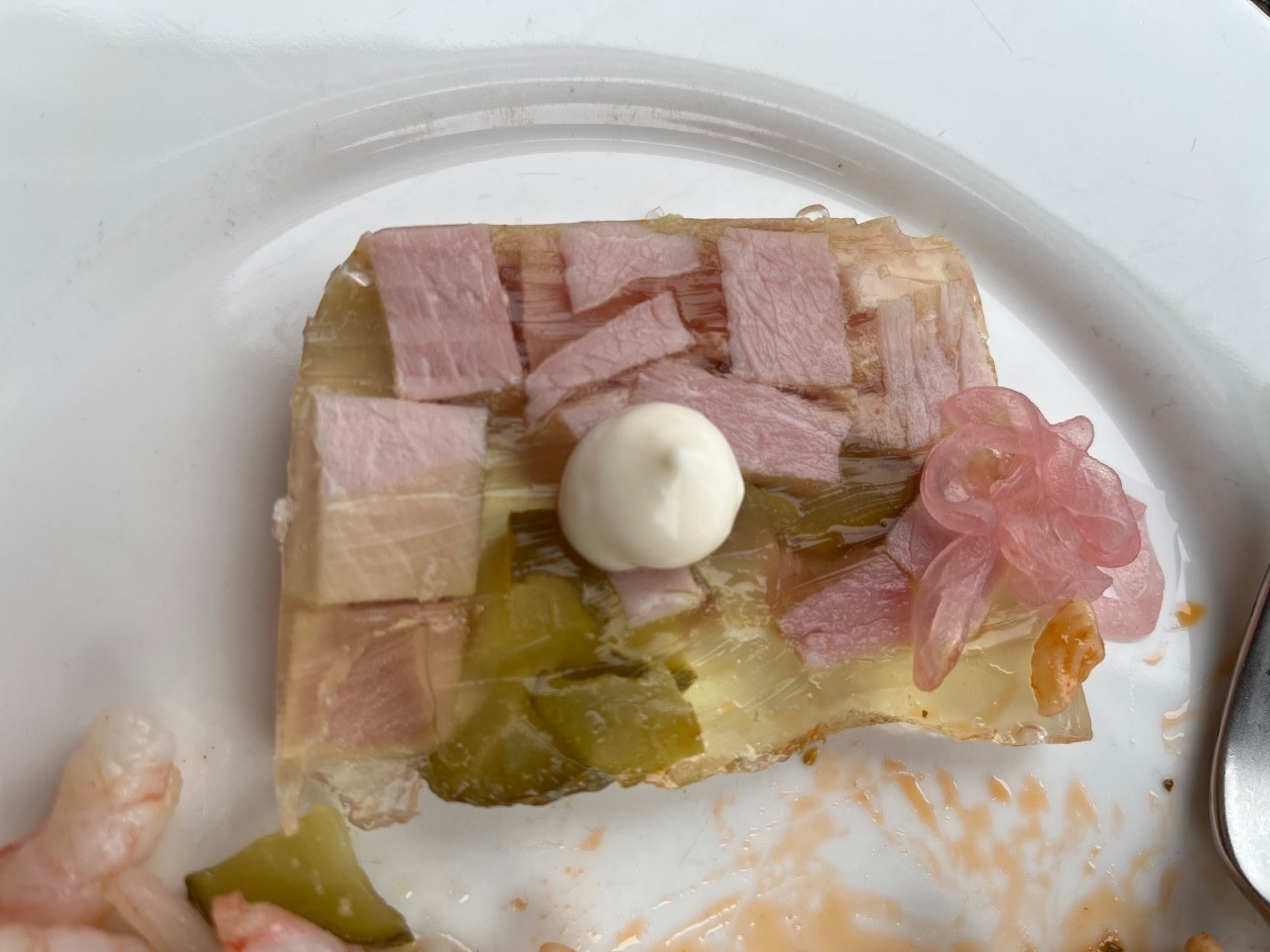 The pasta was good, but I felt guilty about eating it (I wanted pasta): “Fettucini duck ragout”: 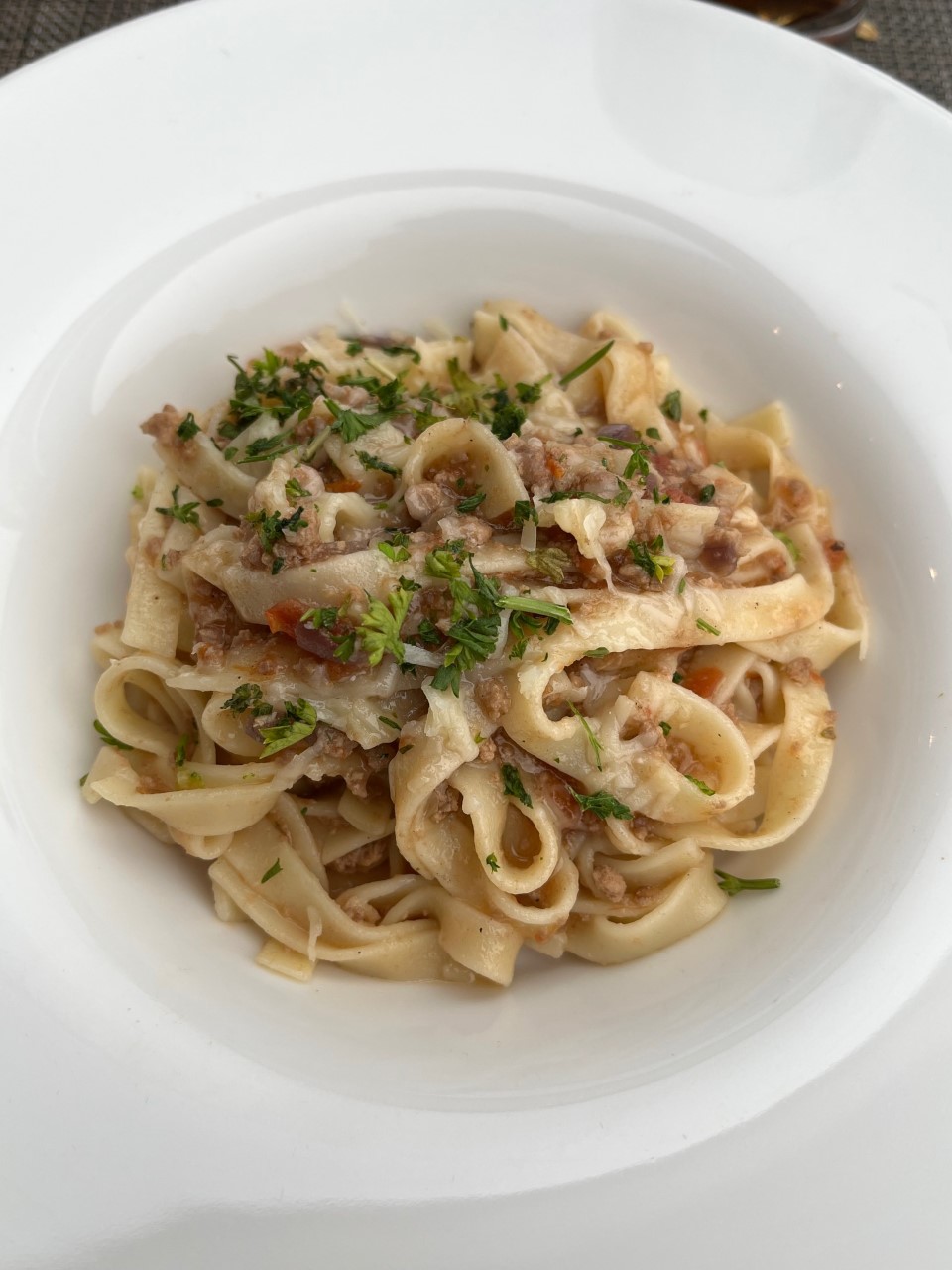 The dessert was the best part: “White chocolate and cranberry bread and butter pudding.” It did have a theme, and I could have eaten another portion. But I”m being a good boy. 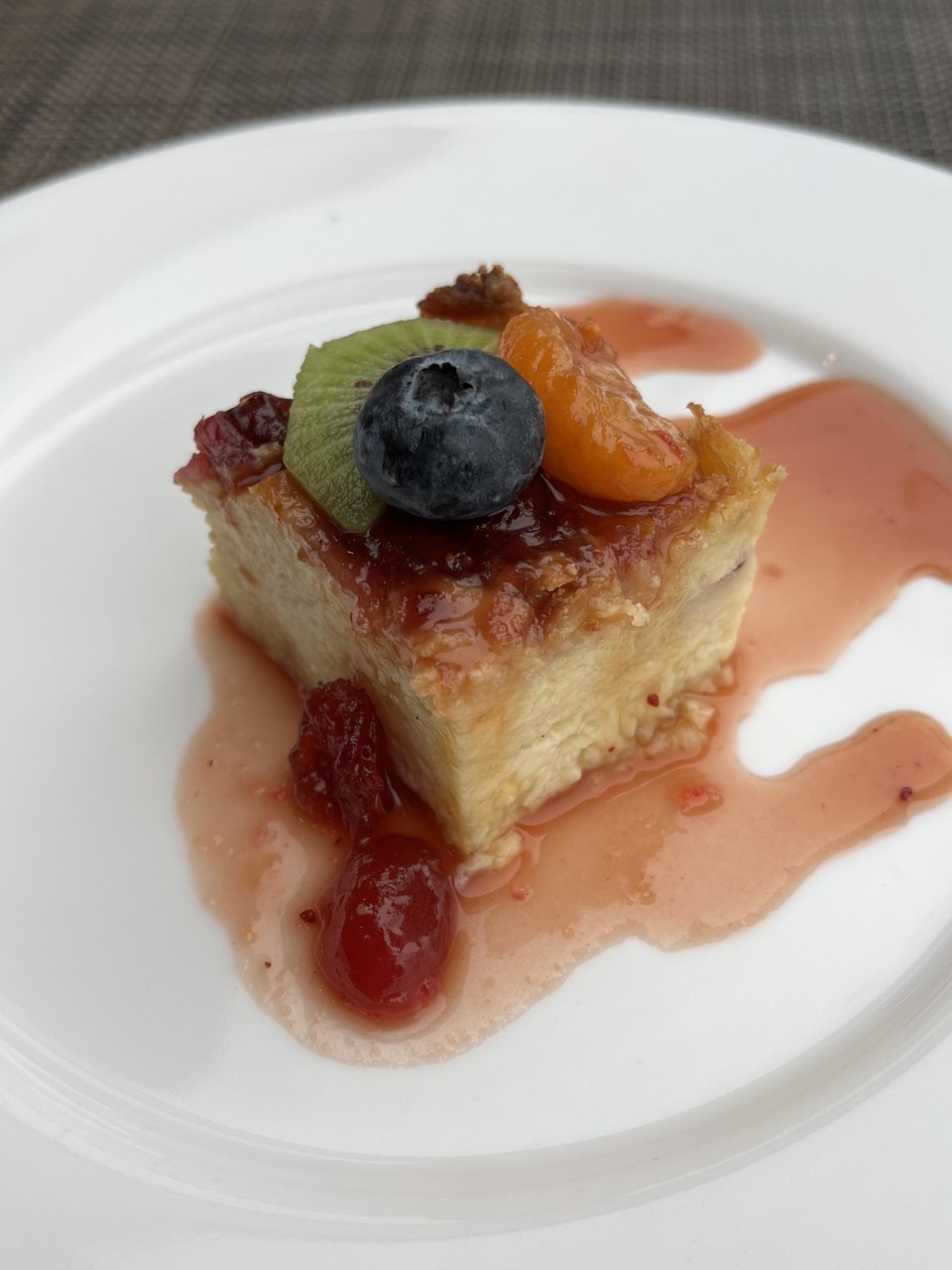 And a fairly light dinner, but not one lacking calories. 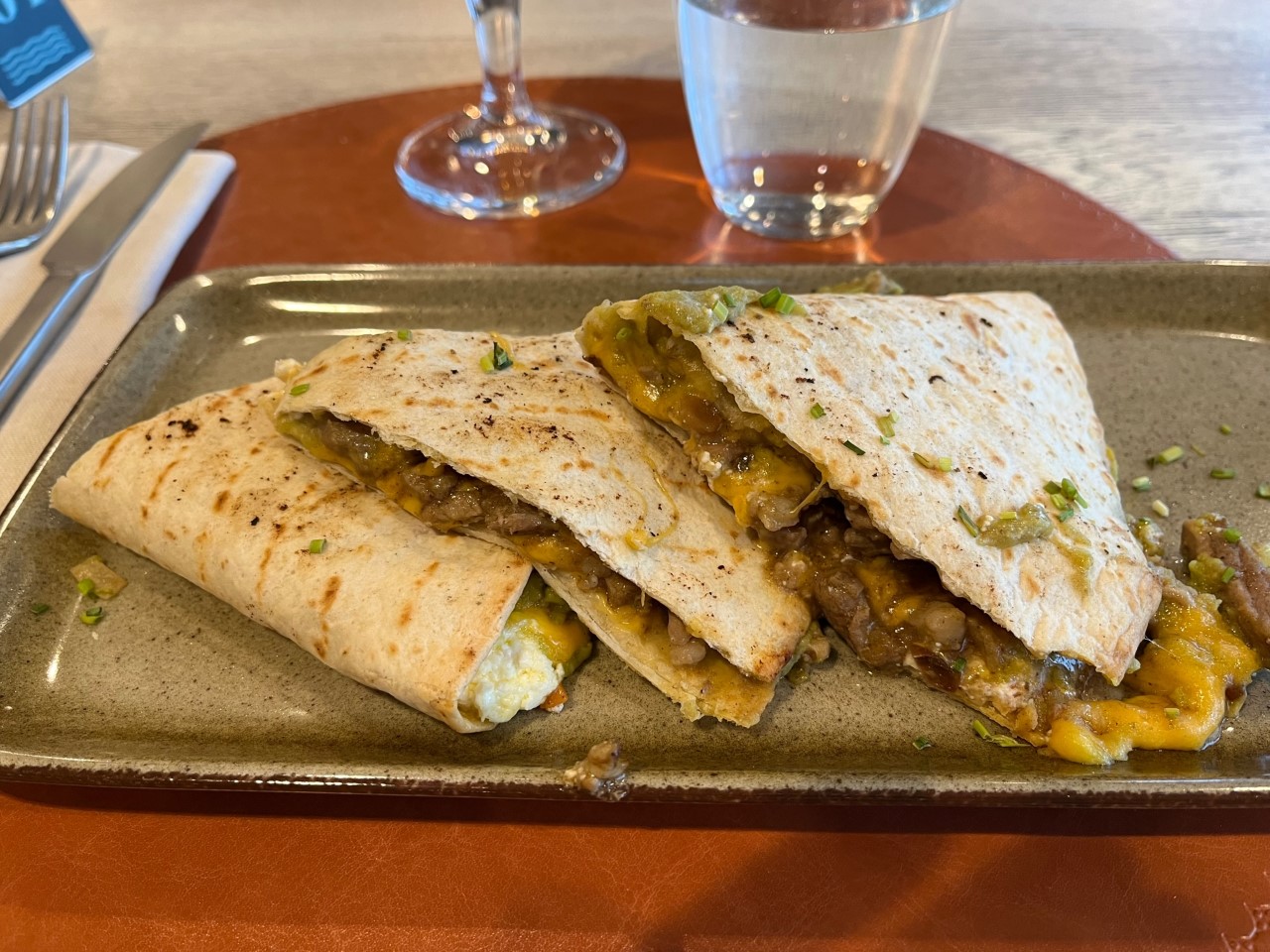 And my beloved blueberry milkshake. 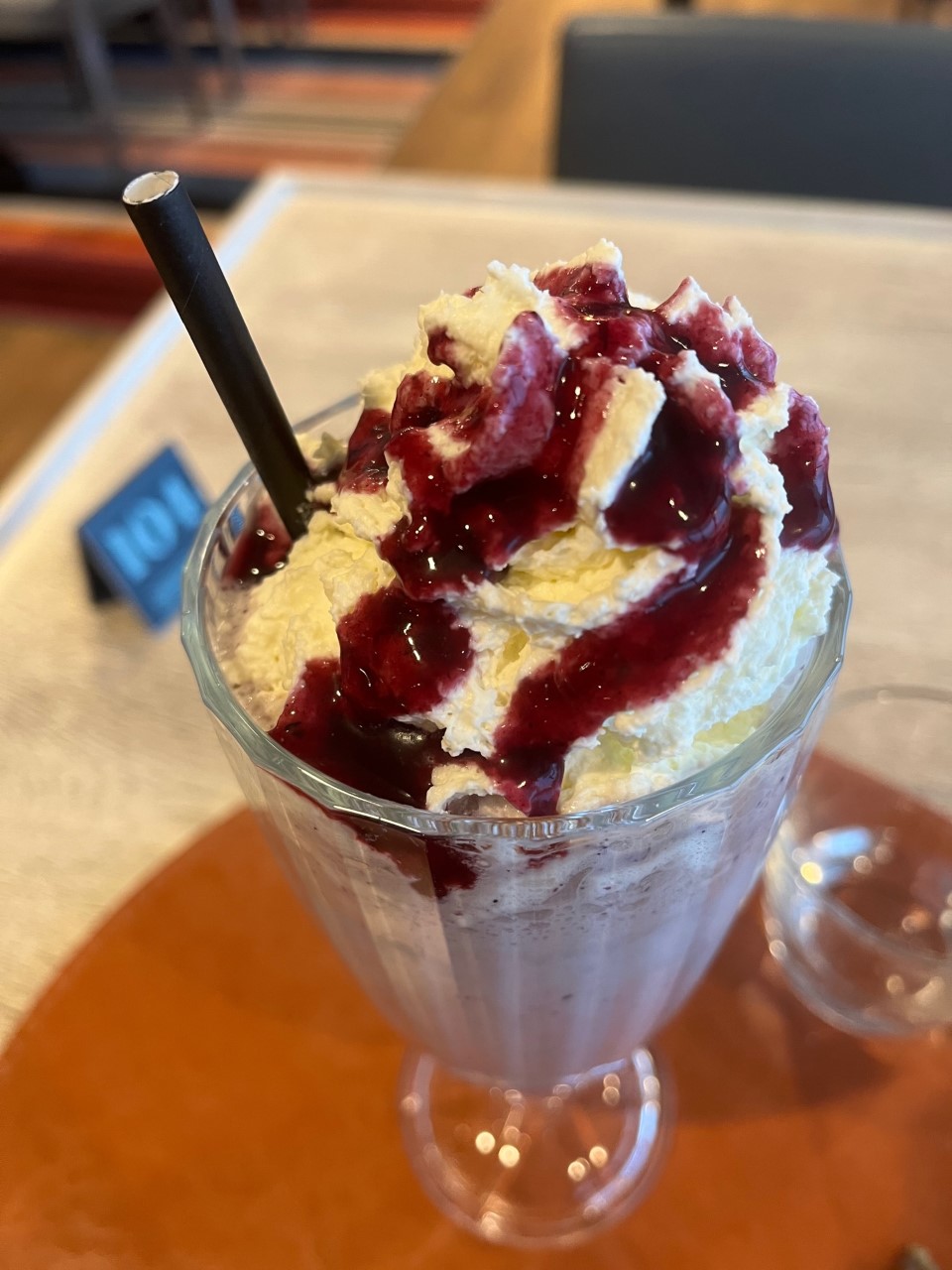 After writing this post and reading A Suitable Boy for half an hour (I’m only 400 pages into that 1400-page behemoth), I hit the sack. I usually go to sleep around 9:30 here and wake up at 4:30. As usual on vacation, I sleep very well.

31 thoughts on “Antarctica, Day 14: The Garibaldi Fjord and back to Punta Arenas”