Today may be the last Caturday Felid post for a while, but bear with me. We’ll see what happens.

The Vancouver Sun reports on how some of the animals left behind in Kabul during the Taliban invasion got rounded up and, after some carnage, made it back to Canada. Some were reunited with their owners who had left separately; and here are three tails of reunion. Click on screenshot to read:

Her name on the rescue flight manifest was Cat 0001.

But Tay Tay, a three-year-old grey tabby, was much more than a number to Gary Ash, 59, a NATO officer stationed in Kabul. Ash worked in occupational safety at Resolute Support Mission (RSM) in Kabul, Afghanistan, located next to the American Embassy.

She was a friend.

So when an international mission organized an airlift to Vancouver to liberate Tay Tay and 300 other dogs and cats stranded in Kabul, nothing would stop Ash from coming to get her, and take her home to Vacaville, Calif.

Tay Tay was one of 10 cats at the RSM headquarters in Kabul. Known as the “Fightin Felines of the RSHQ,” the cats had clipped left ears that showed they were working cats, and plenty of official duties, like catching mice.

“We weren’t supposed to touch them, or pet them,” said Ash, who had arrived in Kabul in Nov. 2020 to work as a garrison safety officer.

“I am a cat person,” said Ash. “I had cat snacks and I’d give them a treat. My peers would say, ‘Stop it, they are supposed to be chasing mice.’”

One cat in particular stood out: Tay Tay.

Soon Tay Tay was following Ash around the base, even sneaking inside to find him if someone left a door open.

Here they are in a photo from the Sun: 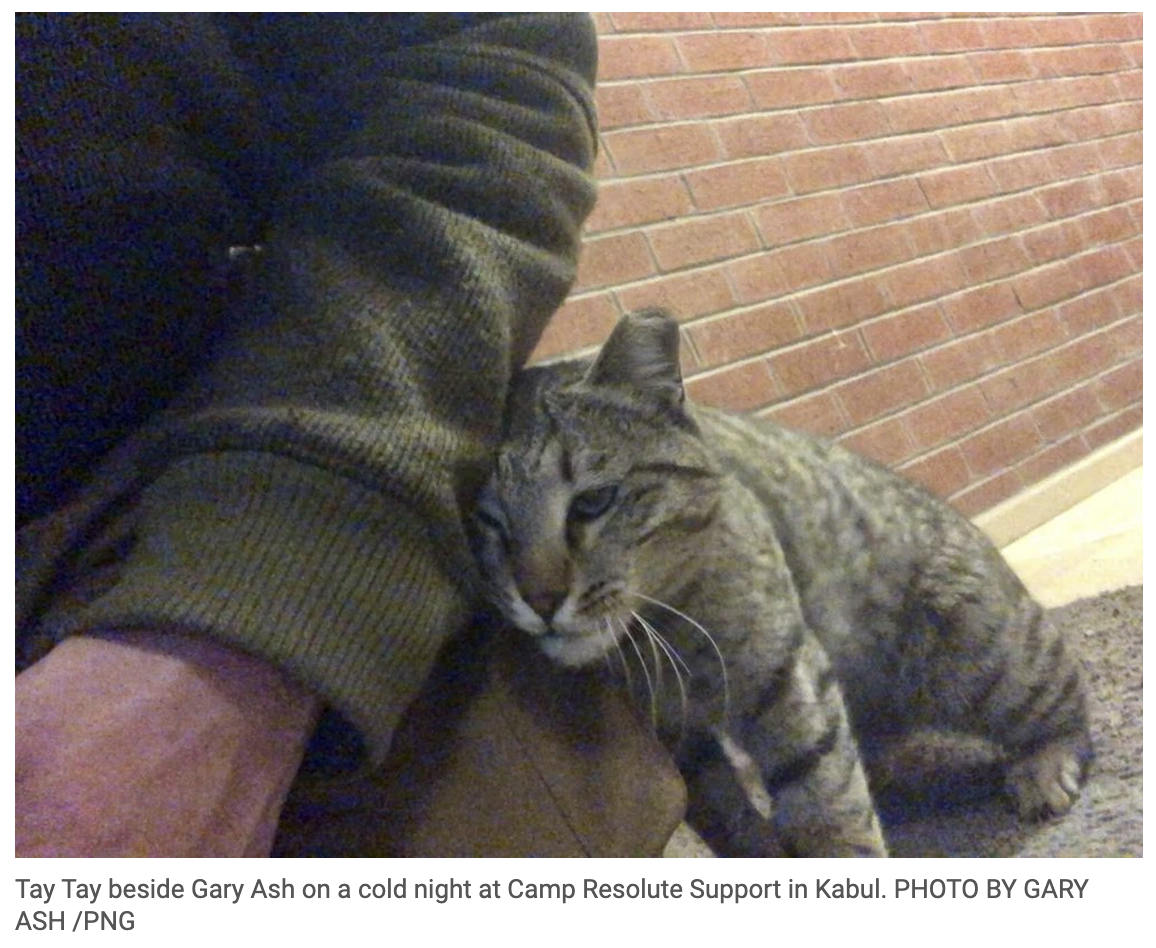 Well, the cat picked its staff, and separating them was not on:

“A bond formed,” said Ash. When he left in June 2021, he was not allowed to take the cat with him, but he left Tay Tay with a friend at the U.S. embassy. “I took comfort in knowing she would be taken care of.”

But then the unthinkable occurred:

As events unfolded during the NATO withdrawal from Kabul in August, Ash learned that Tay Tay had been left by embassy staff in the care of the Kabul Small Animal Rescue (KSAR). Although an evacuation flight had been arranged, “it all fell apart before our eyes,” said Ash.

The dogs meant for that flight were released at the airport under orders of the military, and the cats, still in their cages, were tear-gassed, Ash said. Six of the cats perished, but Tay Tay survived.

She’s a tough one! And, thanks to the intervention of Ceiling Cat, Tay Tay got on a plane.

After an international outcry, months of planning and hard work by KSAR in Kabul, and international fundraising efforts, another flight was arranged. Tay Tay made it onto the plane.

Here’s a video of the nice woman who organized the animal rescue:

I believe Ash drove all the way up from Vacaville California, near Davis, to reclaim his kitty:

When the plane landed in Vancouver on Tuesday, Ash was there to meet her. His fantasy of a warm cuddle dissipated immediately.

“I saw Tay Tay in her giant crate and she was petrified,” said Ash.

Ash took Tay Tay to the hotel, where he let her out of her cage. She found a cosy hiding space in the hotel room, behind the towel rack, and had something to eat. She sniffed Ash now and then, slowly warming up, and even let him slip a harness on her for the trip home — a requirement for going through airport security.

Tay Tay, already traumatized by her last international flight, slipped out of the harness in YVR security. “It took 45 minutes and five security guys to round her up,” said Ash.

And the happy ending:

Now Tay Tay is unwinding in Vacaville, napping under a new favourite chair on a lambskin and a familiar Afghan rug, and, getting used to retirement.

“We’ve been apart for six months and she’s been through hell,” said Ash. “It’s an extraordinary feeling to have her home.”

Tay Tay at home, and I hope she has many years of comfort and can forget the traumas of Afghanistan, tear gas, and the flight. She even has a lambskin! 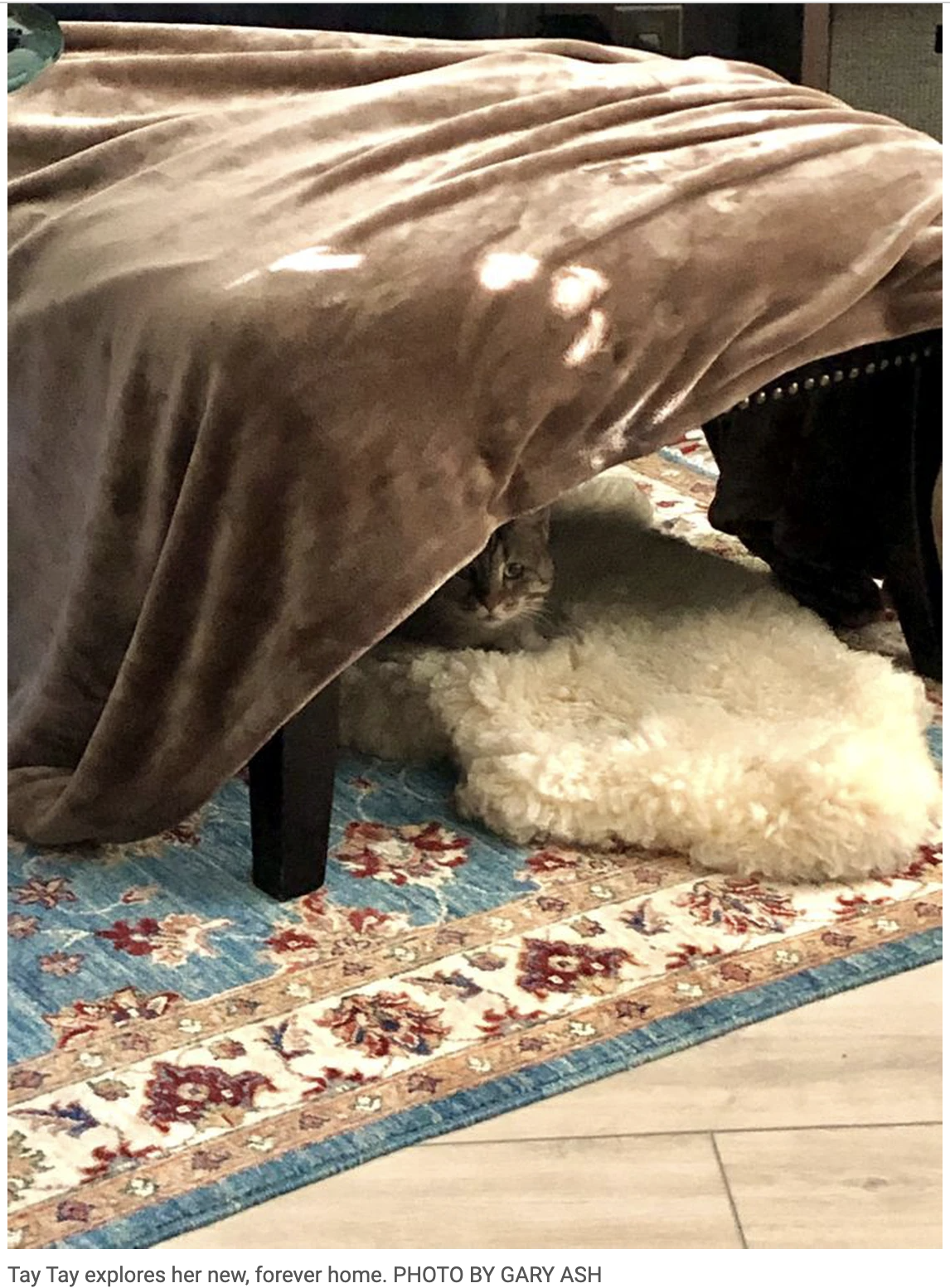 Finally, Cole and Marmalade report on the reuniting of two other people from Afghanistan with their cats. Both had been separated from their animals for months.

First, Barfi that cat reunited with staff Ali (“Barfi” in Hindi is a kind of Indian sugar fudge): 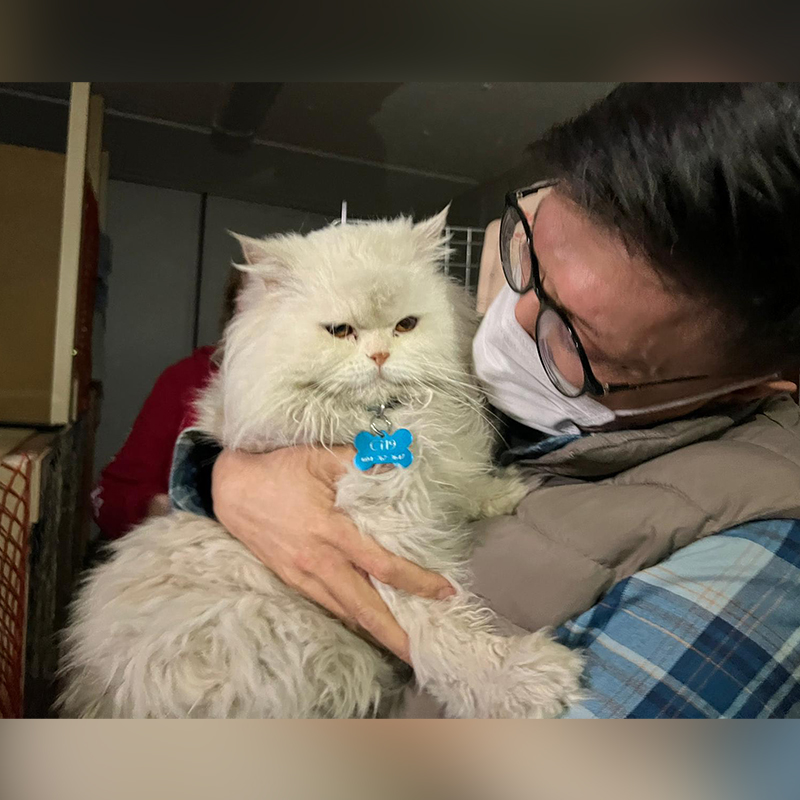 And Air and Bela, two cats united with their staff, Afghan refugees, in Vancouver 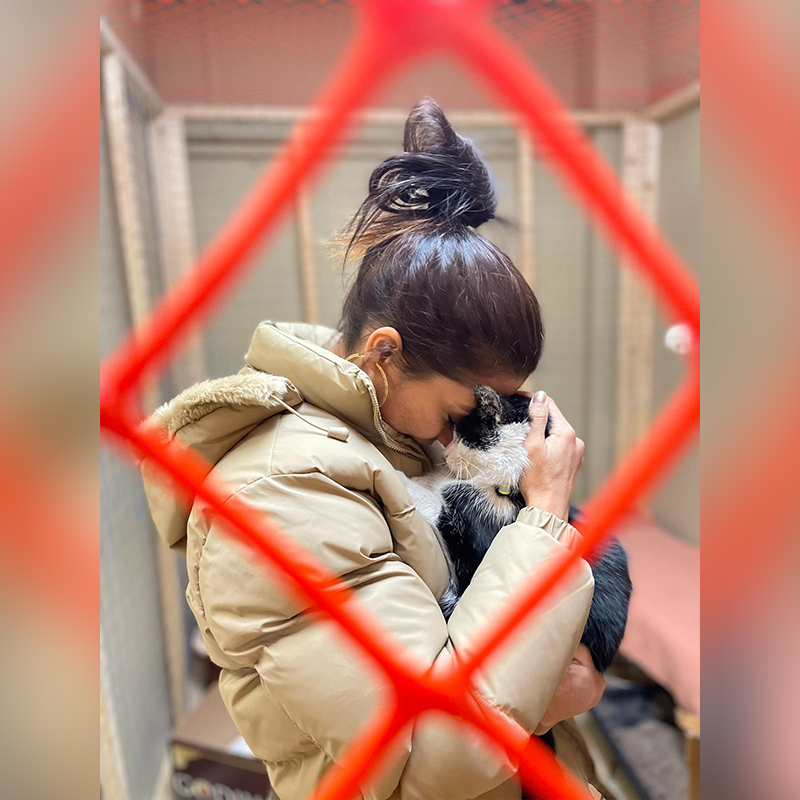 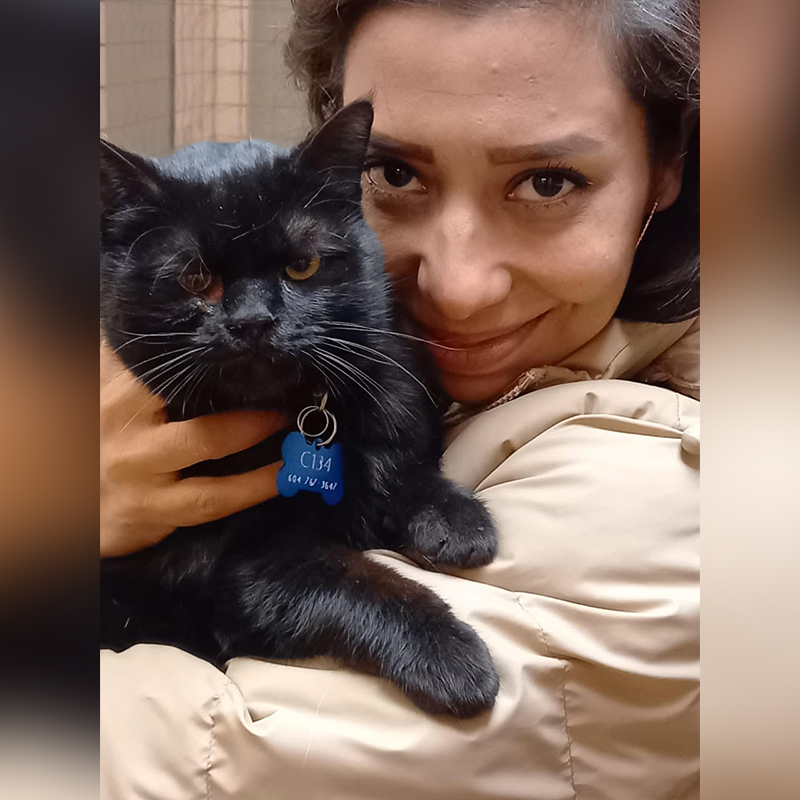 Yes, they do sell lined cat muzzles at Amazon, which appear to be repurposed masks. Here’s the screenshot (click on it if you must have one); they’re now  $19. 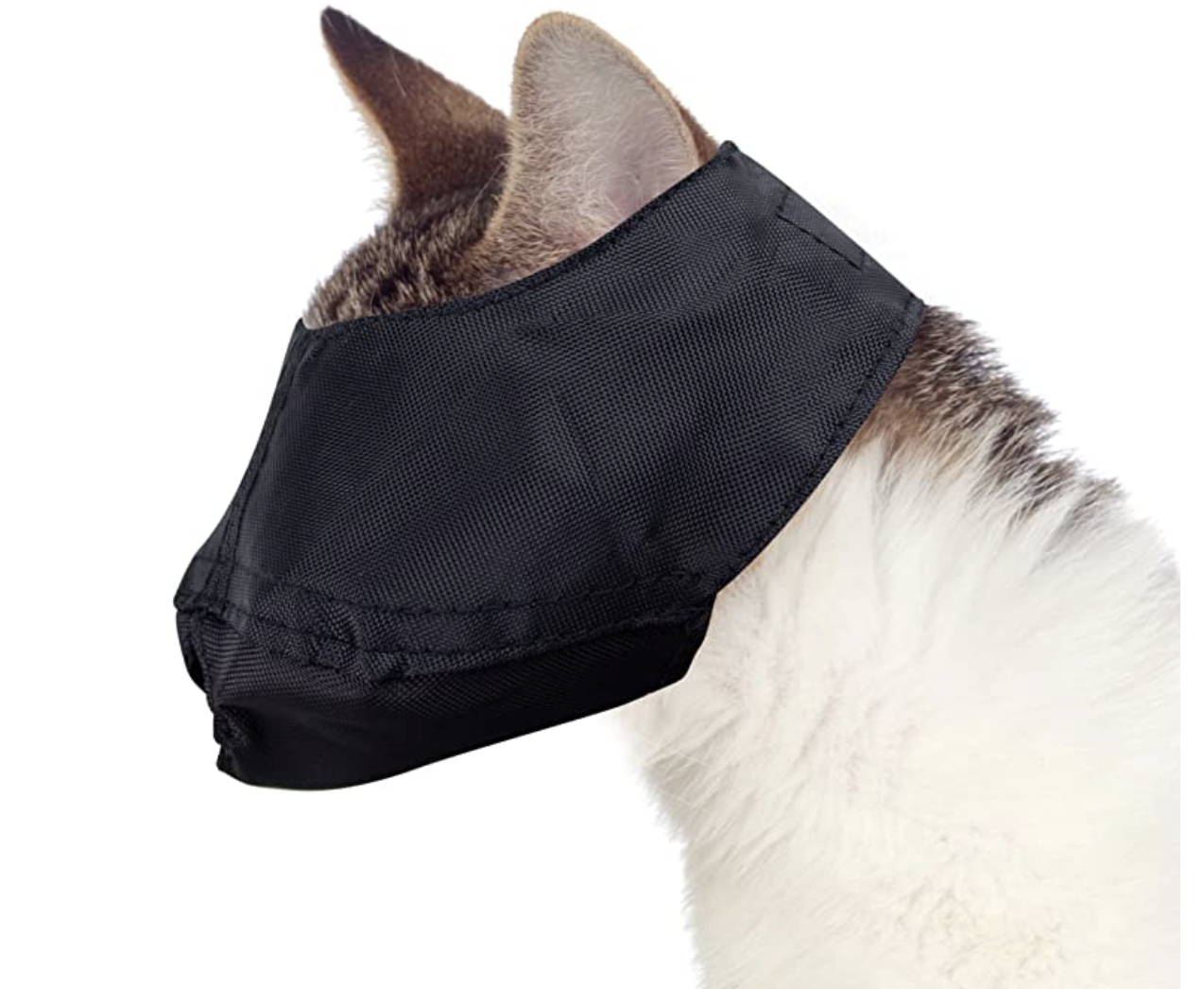 An earlier version, though, seems to have had a different purpose, and may even be a ruse.  This one has 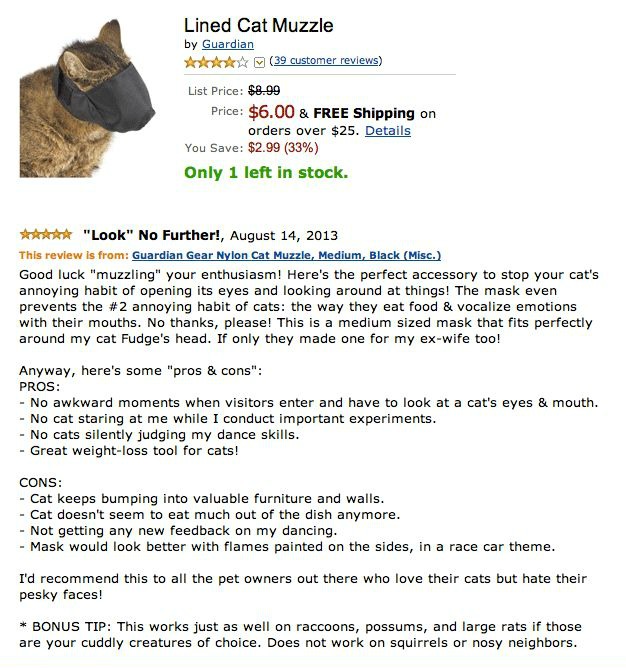 Finally, a lovely video of a cat causing a bit of a stir as an orchestra in Istanbul warms up (Turkish people really do love their cats; see the movie “Kedi” if you want proof. That wonderful movie gets a 98% critics’ rating on Rotten Tomatoes. Seriously, if you like cats, or Istanbul, see it ASAP.)

I have a feeling that the audience paid a lot more attention to the cat than to the music! And the cat will NOT let itself be caught!