Today’s Jesus and Mo strip, called “figure”, shows the barmaid arguing again about the beliefs of the Divine Duo, and once again we see their defining trope: hypocrisy. As for how to live a moral life without religion, you should all know how to do that now. Secular humanism is one alternative, and dozens of atheists manage to live upright and moral lives.

I love to ask believers how they know they have the “right” religion. Some say it doesn’t matter, few are willing to admit that they simply inherited their faith and have come to believe what they learned from their parents, and there are a few chowderheads like the Discovery Institute’s Michael Egnor who thinks they just know:

I will speak here from the Christian perspective as it is the one with which I am the most familiar. The Christian has faith that he has access to truth because he believes that he has been created by a wise and loving God who guarantees this access to truth to him. Indeed this is a radical faith — we can be certain of nothing — but faith in God provides us with a coherent warrant to trust our capacity for reason. Christians have faith, and their faith makes a sensible and grounded belief in reason possible.

Do you understand that? (I don’t.) It seems to say that faith in God (he doesn’t say how this is acquired) gives us trust in reason, and that reason confirms that Christianity is the “right” faith.

That’s the first bit of humor for the day (have a look at the rest of the egnorance in that piece), and here’s the second. (Don’t forget to subscribe to Jesus and Mo if you have some dosh—$1, $2, or $4 per month—to spare.) 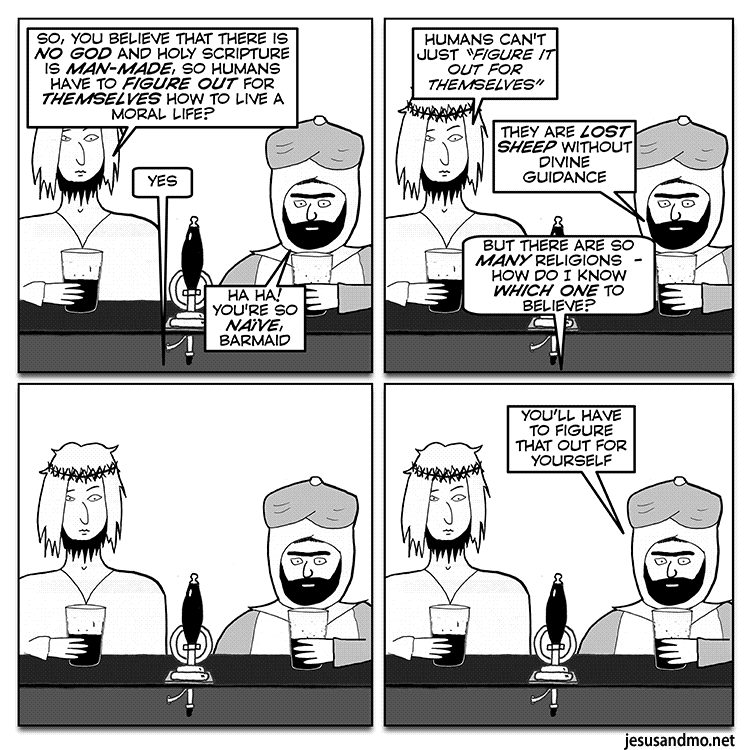