Suzi Weiss now and then takes a turn on her sister Bari’s Substack column “Common Sense”, and this week recounts her trip to watch transgender swimmer Lia Thomas compete in the Ivy League swimming championships at Harvard. You can read the column for free (I think) by clicking on the screenshot, but be sure to subscribe if you read regularly: 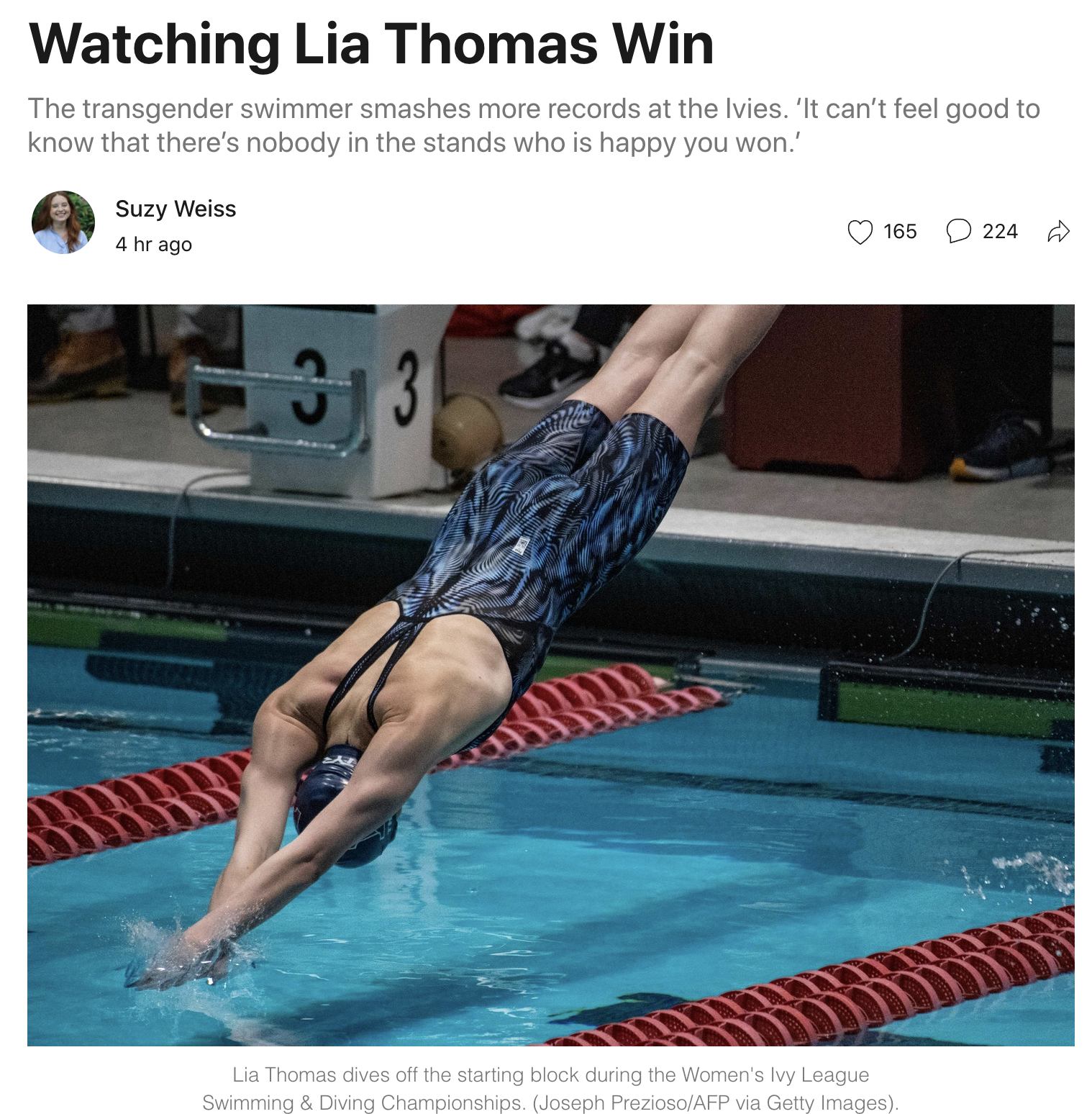 I’ve been critical of the authorities allowing Thomas, a transgender woman, compete against other women swimmers, for she clearly has a big physical and physiological advantage over biological women swimmers, having nabbed several important victories. Although Thomas has been taking testosterone-blocking hormones, she began transitioning after puberty, and apparently retains her male bits (see article). In fact, her hormone levels violate the NCAA guidelines for this year. But because the regulations were passed after Thomas began competing on the Penn’s women’s team, she’s been grandfathered in (is that the right phrase?).

But although I think that Thomas, with her inherent biological advantages—advantages that appear to be maintained for at least three years after hormone suppression—should not be able to compete on the women’s team, that doesn’t mean I lack sympathy for her. It’s a hard road she’s chosen, and for sure she’s not doing it just to win championships. She swam for the Penn’s men team before transitioning, and clearly loves to swim. Granted, she didn’t stand out as a male swimmer, but surely nobody does these things to their bodies just to win medals—medals that will surely always be questioned.  The best I can do is, while maintaining the moral and political equality of all transgender people, and also ask that their preferences (gender, pronouns and the like) be respected, also argue that it’s still unfair for trans women to compete against biological women in sport. It’s unfair and, if this continues, is likely, it will turn women’s sports into a mess, or destroy them completely. Apparently most parents of Penn women swimmers, as well as most of those swimmers themselves, feel the situation is unfair, but the swimmers have been somewhat silenced (see below).

The solution that most readers and I have hit on is to either have three categories (“men”, “women”, and “other”), which seems cruel, or keep the same two categories, with only biological women able to compete in women’s sports but anybody allowed to compete in men’s sports (a “men+ league?”). But that isn’t perfect, either, as both transgender women and men will have athletic disadvantages against biological men.

But I adamantly reject the label “transphobe” for people who think about this situation and decide that Thomas’s competing against biological women is unfair. But, as you’ll see, it’s that label, used in the same way the label “racist” is in discussions of equity, that strikes fear into people’s hearts and makes them shut up. Is it also “transphobic” to criticize the participation of medically untreated biological men in women’s sports, if those men identify as women?  That’s allowed in several places and appears to be the Biden Administration’s position, as well as that of the ACLU. But surely it’s not “fear of transsexual people” that motivates most of the people pushing back against the participation of people like Thomas.

A few quotes from Weiss (indented), which I’ve summarized into four categories:

Thomas, 22-years-old and a fifth-year senior, is the star swimmer on the Penn women’s team—and a transgender athlete who swam for her first three years on the men’s. The tallest swimmer on her team by at least a head, she has to crouch a little to get in the Quakers’ huddle.

Thomas started making headlines in early December, when, at the Zippy Invitational in Akron, she set two national records in the 500- and 200-yard freestyle events. She beat her closest competitor, another Penn swimmer, in the 1,650-yard freestyle by 38 seconds. Since then, she has continued to smash records.

Lia Thomas isn’t just a swimmer. She’s become a totem in the culture wars, making abstract debates—about the tradeoffs between inclusion and fairness, about the tension between identity versus biology, and about the complications of treating sex as a mental fact and not a chromosomal one—real and radioactive. Her presence—and dominance—in the water has been confounding observers and many of the parents gathered at the Harvard pool to watch the Ivies. They wonder whether they are witnessing the beginning of the end of women’s sports.

. . . Thomas, an economics major with a minor in classics, is from Austin and started swimming at the age of five. When she swam on the men’s team, Thomas never made it to the NCAA Championship. Now, Thomas is seeded number one in the league and is poised to give Katie Ledecky a run for her money next month at the NCAA championships.

Believe me, if Thomas beats Katie Ledecky in any event at the NCAA championships, this is going to blow up big time, for Ledecky, just 24, is regarded by many as the best woman swimmer in American history/ From her Wikipedia entry:

Kathleen Genevieve Ledecky (born March 17, 1997) is an American competitive swimmer. Having won 7 Olympic gold medals and 15 world championship gold medals, the most in history for a female swimmer, she is considered one of the greatest swimmers of all time. Ledecky is the world record holder in the women’s 400-, 800-, and 1500-meter freestyle (long course). She also holds the fastest-ever times in the women’s 500-, 1000-, 1500-, and 1650-yard freestyle events.

Most parents in the stands lay [the controversy] at the feet of the NCAA. They had expected that the NCAA would impose some clarity. Instead, in January, the NCAA announced that when it came to transgender athletes, it would defer to the governing bodies of each and every sport. Three weeks ago, U.S.A. Swimming announced its new guidelines, which are pretty extensive. For example, a transwoman now has to have her testosterone tested, and clear the 5-nanomoles-per-liter threshold for 36 months. This apparently caught the NCAA by surprise, prompting the organization to double back and announce that it would be unfair to transgender swimmers to implement the new U.S.A. Swimming guidelines this late in the game.

All this means that Thomas will get to compete at the NCAA championships next month. And that the parents of the female swimmers she’s trouncing are very annoyed.

Pushback and debate about biological differences between men and women.

Carole Hooven, the co-director at Harvard’s Department of Human Evolutionary Biology and the author of the book “T: The Story of Testosterone, the Hormone that Dominates and Divides Us,” is an expert on the biological differences between men and women. Hooven notes a few of the differences, on average, between those who have gone through male puberty and those who have not: taller heights and longer wingspans, larger bones, and hearts, greater lung capacity, the structure of male-adapted muscles that are easier to build and harder to lose, and lean body mass. Some of these traits can be tamped down with drugs. Others can’t.

“Men don’t have an advantage over women because of one of these factors, but all of them put together,” Hooven says.

“It is not fair for women to race against transgender Lia Thomas,” tweeted female tennis champion Martina Navratilova recently. Diana Nyad, the legendary female swimmer who is the only person to swim between Florida and Cuba unaided, wrote in The Washington Post that “no amount of analysis can erase male puberty’s advantages. Perhaps a fairer plan is to give competitions a new ‘open’ classification: Cisgender, transgender, intersex—all are welcome.”

I’m told that the Princeton girls are “freaking out.” Sixteen Penn swimmers sent a letter to Penn and the Ivy League urging them to uphold USA Swimming’s decision, which set forth much stricter guidelines for trans athletes than the NCAA’s. Three hundred other swimmers sent another letter to the NCAA in support of Thomas. There have been a ton of statements, too, from Penn (“Penn Athletics is committed to being a welcoming and inclusive environment for all our student athletes”); Michael Phelps (“sports should be played on an even playing field”); and Caitlyn Jenner (“We cannot have biological boys competing against women. It’s bad for the trans community”).

The Penn parents tell me there’s yet another letter coming down the pike, this one organized by them with the help of former Olympian Nancy Hogshead-Makar, which argues that Thomas’s participation is unfair. That one has 3,000 signatures, including from more than 100 olympians and Hall of Fame swimming coaches.

Silencing of dissenters. This to me is the most disturbing part of the issue. Certainly the participation of transgender athletes in various leagues is an issue not only worth debating, but one that must be debated, for it speaks to important principles of fairness, much less to Title IX regulations meant to give men and women parity in education, including sports. At that time the issue of transgender athletes wasn’t envisioned.  Now I can understand why the other Penn women swimmers wouldn’t want to publicly

But the Penn couple thinks that Thomas’s comfort has come at the expense of their own daughters’ who they say have received “veiled threats” from the university when it comes to speaking out. At the meet, the announcer opens with a warning against “racist, homophobic, or transphobic discrimination.”

So it is no surprise that not one of the swimmers would speak to me; nor have they spoken on the record to any other reporter. It’s not that they haven’t considered it. “One of the swimmers on their team called my daughter and asked if they were to put out a statement, if the Harvard swimmers would too,” a Harvard dad told me on Friday night.

. . . One of the Penn moms says her own daughter warned her against speaking out. “She’s worried about getting into grad school, and she doesnt want my name or hers to come up on Google attached to this.” (Her daughter is hoping to get a graduate degree in biology.)

The parents say their daughters know it’s wrong that Thomas is swimming against them but that they will not risk getting smeared with the label transphobe.

What about Mike Schnur, the Penn’s coach, who is wearing a mask with a trans flag on Saturday night, where Thomas swims in the 100 yard freestyle? “Politically, he’s as conservative as they come,” says a Penn dad. “He just loves winning and loves his job.”

It’s this kind of censorship that stifles discussion around an important issue, and it’s fear of the label “transphobe” that keeps people from giving their opinions.  What Woke people have discovered is that they can silence their opponents with simply a single word denoting bigotry. Or, in the case of Coach Schnur, a single design on a mask.

The rest of us have no such power—only reasoned arguments, which opponents are determined to ignore.

83 thoughts on “Suzy Weiss on swimmer Lia Thomas, and the chilling of dissent”