It was understandable when emojis became “diverse”; after all, if you’re sending an emoji of yourself, you want it to look at least reasonably accurate. Using the new choices I have on email, though, this is the best I could do for a Jerry emoji:

That pretty much sucks, as my hair isn’t brown, it’s gray, but there’s no gray hair to be had (is that ageism?). I don’t wear tee-shirts like that, either. But at least my glasses are reasonably accurate, and my skin tone, which is sort of sallow, is okay too. But I’ll never use this thing, as I rarely use emojis except in personal emails, and those are limited to 1) smiley face, 2) cat smiley face, 3) cat smiley face with hearts, 4) cat face with tears, and 5) the mallard drake emoji (there are no hens, which seems to me a kind of sexism, as I can’t represent Honey).  And I almost never use any emojis in professional correspondence.

But when this diversification started—and there are tons of “people” emojis—the result was predictable: some people felt left out, as there’s only a limited number of possible human features, including skin color, that can be cobbled together.  And each emoji has to be approved by an Emoji Czar.

And so, using your tax money, the increasingly woke National Public Radio (NPR) recently published this article (click on screenshot to read): 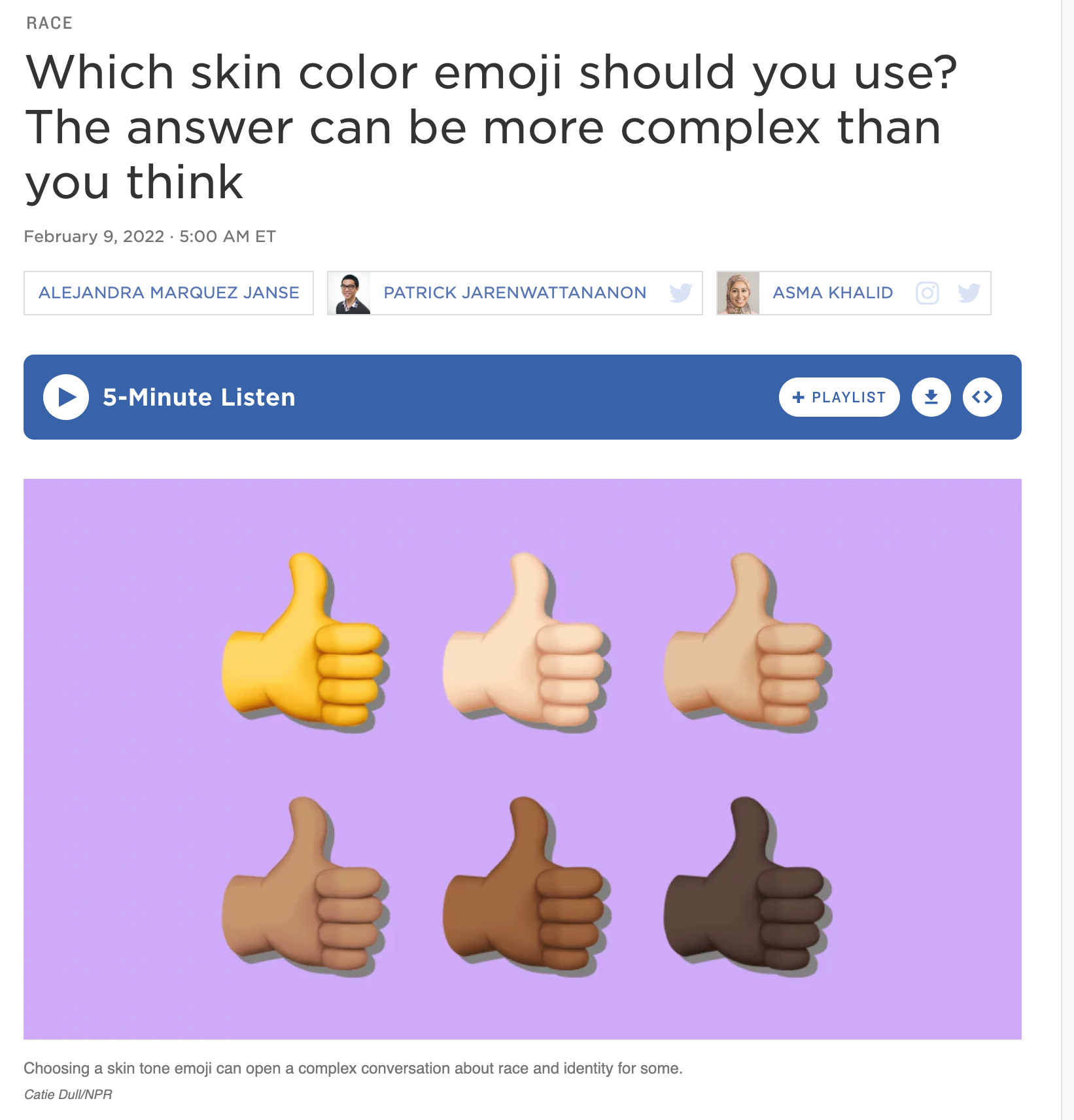 The issue, of course, is that some people don’t see themselves as “accurately represented” (we’re talking only about skin tone here) because they fall between the six options available, which include “Simpsons Yellow”.  Here are a couple of beefs from the NPR piece:

Heath Racela identifies as three-quarters white and one-quarter Filipino. When texting, he chooses a yellow emoji instead of a skin tone option, because he feels it doesn’t represent any specific ethnicity or color.

He doesn’t want people to view his texts in a particular way. He wants to go with what he sees as the neutral option and focus on the message.

“I present as very pale, very light skinned. And if I use the white emoji, I feel like I’m betraying the part of myself that’s Filipino,” Racela, of Littleton, Mass., said. “But if I use a darker color emoji, which maybe more closely matches what I see when I look at my whole family, it’s not what the world sees, and people tend to judge that.”

This is screwed up in so many ways. What Racela apparently means by saying that he “presents as pale” is that he “looks white”. But if he uses the whitest emoji, he’s betraying his Filipino genes, which are more apparent in the skin color of his family.  This raises important questions:

a. Why does he need to present the skin tone of his whole family when he’s writing a personal email?

c. Is this really important? Seriously? Someone needs to get a life, including the authors of this woke NPR piece.

Cole is originally from California and identifies as Black and an American Descendant of Slavery. She said that while she was not offended when a non-brown friend used a dark emoji, she would like to understand why.

“I think it would be nice if it is their default, but if they’re just using it with me or other brown people, I would want to look into that deeper [JAC: a “deep dive”] and know why they’re doing that,” she said.

Once again, do you need to subject your friends to an inquisition—make no mistake, that’s what Cole’s “looking deeper” really means—to find out why, if they’re not “brown people,” they’re using brown emojis. Is this transracialism, like Rachel Dolezal, a sign of solidarity, or something darker in meaning?

But wait, there’s more: the problem of “emoji-switching”, or “passing as yellow”:

Jennifer Epperson, from Houston, identifies as Black and said she changed her approach depending on who she was talking to.

Ah, the emotional labor of “unpacking race relations” by using colored emojis in an email! The solution here is simple: stop using emojis in professional settings. Is that so hard? Nobody expects you to “unpack race relations” (whatever that means; it’s really just postmodern jargon) in a work-related email. In fact, there’s no need to use emojis in professional emails. They started as a way to convey emotions lest your words be misunderstood, but you can be properly understood if you just write clearly.

Finally, we have the whole issue of “representing yourself” by skin tone alone, as though that is the most important aspect of yourself that you want to show the world. Forget about the content of your character; you have to get the color of your skin precisely right. More beefing, to the point where I might suggest a therapeutic intervention:

Zara Rahman, a researcher and writer in Berlin, argues that the skin tone emojis make white people confront their race as people of color often have to do. For example, she shared Sarai Cole’s confusion when someone who is white uses a brown emoji, so she asked some friends about it.

“One friend who is white told me that it was because he felt that white people were overrepresented in the space that he was using the emoji, so he wanted to kind of try and even the playing field,” Rahman said. “For me, it does signal a kind of a lack of awareness of your white privilege in many ways.”

Rahman, who in 2018 wrote the article for the Daily Dot, “The problem with emoji skin tones that no one talks about,” also challenges the view that the yellow emoji — similar to the characters from The Simpsons — is neutral, because on that show, “there were yellow people, and there were brown people and there were Black people.”

She said there was a default in society to associate whiteness with being raceless, and the emojis gave white people an option to make their race explicit.

“I completely hear some people are just exhausted [from] having to do that. Many people of color have to do that every day and are confronted with race every day,” Rahman said. “But for many white people, they’ve been able to ignore it, whether that’s subconsciously or consciously, their whole lives.”

You know, I’ve never experienced white guilt when using an emoji, but perhaps it’s because the only human emojis I use are the smiley or frowny faces in Simpsons Yellow.  Now I see that I’ve either been a good antiracist by not using emojis like the white one I made above, for I’d only be flaunting my privilege; but I could also be deemed racist when using the yellow one, as I’m either denigrating “yellow people” (presumably Asians) or, worse, assuming the very identity of an Asian.

What all this shows is that NPR needs to curb its wokeness, and stop publishing these kinds of article about people having nervous breakdowns about their emojis. But, importantly, it also shows clearly the racialization of the entire country: the fact that the most important thing you need to say about yourself—the key to representing yourself—is is the color of your skin. And as long as people feel that this is their defining characteristic, that’s how long this mishigass will continue and our society will keep engage in identity politics along color lines (even though color is a “social construct.”)

I’ve written too much, I fear, but this kind of stuff both amuses and angers me. It makes me realize how permeated society is by racialization, how important it is for people to be represented by their skin color, and, in the end, makes me despair that this division isn’t going away any time soon. But that’s the subject of the next post.

In the meantime, if you want to read more emoji-beefing, click on the article below from The Verge, or read Rahman’s 2018 article from The Daily Dot.

58 thoughts on “The vexing issue of emoji colors”