This paper written by four chemists just appeared in Nachrichten aus der Chemie (“Chemistry News”), the news outlet outlet of the German Chemical Society. It’s in English, and free online, so you should be able to open the paper by clicking the screenshot below. It’s a call for scientists to resist ideological pressures that may distort or reject science, as happened during the “Lysenko affair” in Stalin’s Soviet Union. 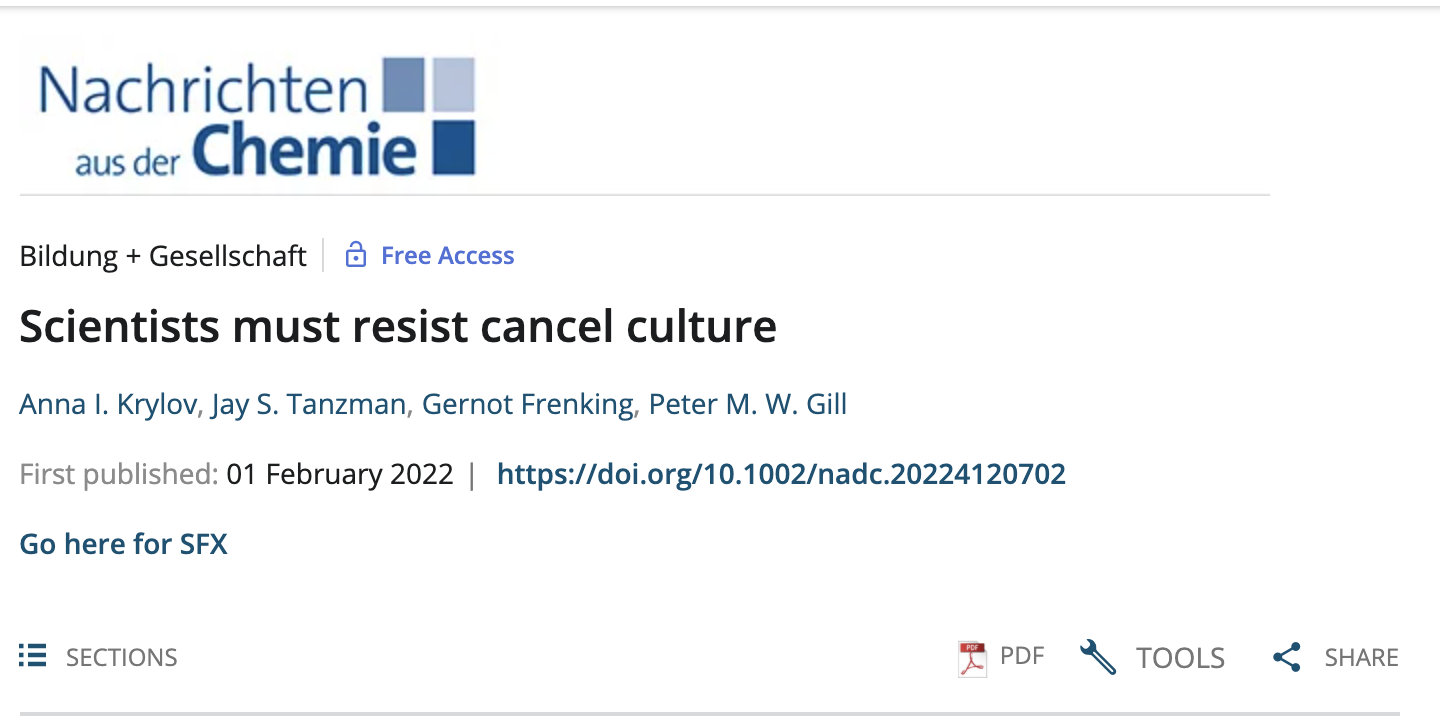 The thesis of the paper is this: whereas scientific censorship used to come from the top (cf. Lysenko/Stalin, with “proper” genetics enforced by the government, or Nazi Germany, which decried “Jewish physics”, driving many great physicists out of the country), now the “cancellation” begins on the bottom, with social media sites and readers pressuring journal editors or publishing companies, sometimes resulting in the rejection of sound papers because they contravene an established ideological narrative. And there is also policing of language. This kind of “cancellation,” of course, has to come ultimately from the top, but is propelled by disaffected people on social media.

A few quotes from the paper (indented)

Suppression today takes the form of „Cancel Culture“, censorship administered not by repressive governments but by Twitter vigilantes, an „outrage mob“ „whose goal is to sanction or punish … individuals or organization[s] they consider responsible for something that offends, insults, or affronts their beliefs, values, or feelings“.1)

Consider the cancellation of chemist Tomáš Hudlický,4,5) who in 2020 published an essay in Angewandte Chemie discussing the progress of organic synthesis and expressing his views on the hiring practices and training of scientists and the integrity of the literature.

The publication sparked a Twitter firestorm that condemned the article as „offensive“, „inflammatory“; the content as „alienating“, „hurtful“, „xenophobic“; the paper as „abhorrent“, „egregious“; and Hudlický as „racist“, „misogynist“, a „slithering insect“. Sixteen editorial board members resigned in protest of the publication. The journal removed the paper from its website (an unprecedented act), issued an abject apology, suspended two editors, and began an internal investigation. Condemnation ensued in blogs, journals, and statements issued by chemical societies.

We invite readers to read Hudlický’s essay and his elaboration to the National Academy of Scholars.5) Whether one agrees with his views or not, a civilised debate should have ensued, not an avalanche of insults. The journal could have invited a rebuttal; instead it capitulated to the mob.

Hudlický’s cancellation did not end there. A planned special issue of Synthesis in his honour was cancelled, invitations to speak at conferences and to review papers ceased, citations to his papers were deleted, and collaborators were encouraged to dissociate themselves from him.

The cancellation of geophysicist Dorian Abbot is another example of censoring an individual’s scientific contributions because of his views on non-scientific matters.6–8) Abbot had been invited to deliver a public lecture at MIT on „climate and the potential for life on other planets“. But a small group of activists, outraged by Abbot’s advocacy8) for equal opportunity, fairness, merit-based evaluation, and academic freedom, initiated a social media campaign to uninvite him. MIT quickly cancelled the event, violating their own „policy of open research and free interchange of information among scholars“.

These examples underscore authorities’ responsibility to resist outrage mobs: „Although outrage mobs often trigger the punishment process, in Western democracies, mobs no longer actually burn witches at stakes. … Mobs do not get papers retracted; that is the decision of editors and editorial boards. Thus, the key turning point in whether an academic outrage mob is effective at punishing an academic for their ideas is … the action of authorities.“1)

Well, one can argue about whether a civilized debate could have ensued: that may be impossible in these days when people get heated up and censorious so quickly. But what cannot and should not happen is for editors to bow to social-media pressure just to reduce the heat.  Yes, they can go back and “look at” a paper to see if it’s sound, but all too often that reexamination is selective, spurred by the social-media mob, and with editors looking for reasons to censor papers or talks.

The Dorian Abbot cancellation, which I’ve written about before (see posts here), is unforgivable (MIT is the culprit). Because Abbot had used social media to oppose DEI initiatives, public outcry made the MIT administration cancel a prestigious invited lecture—one that had nothing to do with DEI. It was a public lecture on global warming and the possibility of alien life.

The point is that science should oppose the incursion of political views into science, though we should not forget, of course, that some science has been done with political ends, and that scientific results have sometimes been warped to meet these ends. Scientists are not purely apolitical animals, and sometimes it affects their work.

But it doesn’t help that journals are now policing science and its language to ensure that people don’t get offended. Get a load of this from the Krylov et al paper (emphasis is mine).

Some institutions have actually institutionalised censorship. For example, the Royal Society of Chemistry (RSC), a major publisher, has issued guidelines10) for editors to „consider whether or not any content … might have the potential to cause offence“. An RSC memo explains that the guidelines were developed in response to the Hudlický affair.

The document elaborates: „The aim of this guidance is to help you to identify and prevent the publication of inappropriate content in our journals and books.… Words, depictions and imagery have the potential to cause offence…. There can be a disparity between the intention of an author and how their content might be received – it is the perception of the recipient that determines offence, regardless of author intent.“

The editors are instructed to be on the lookout for „[a]ny content that could reasonably offend someone on the basis of their age, gender, race, sexual orientation, religious or political beliefs, marital or parental status, physical features, national origin, social status or disability“ or are „[l]ikely to be upsetting, insulting or objectionable to some or most people“. These guidelines are so broad as to justify censoring anything in chemistry and beyond.

Note that, like the NYT’s firing of Donald McNeil after he used the “n-word” in a didactic context,the RSC is taking the NYT’s stance that “Intent is irrelevant.” All that matters is how offended someone is by a remark, not what the person who made the remark actually meant or intended. That is not a rational way to deal with conflict, and of course the law distinguishes regularly between intentional and accidental harm.

Censorship is antithetical to science. Rather than turning social media censorship into policy, scientific leadership worldwide should reject cancel culture and defend the core principle of science – the free exchange of ideas in the pursuit of truth.

This kind of censorship happens all the time in the humanities: think of Rebecca Tuvel’s demonization when she wrote a philosophical paper on transracialism vs. transsecualism. She survived that one, but others haven’t.

As a coda here, the editors of Nachrichten were besieged with social-media pushback, especially strong for a paper that isn’t that controversial. There were not only tweets, but phone calls and actual letters to the journal, all complaining about the paper and calling for its retraction. I forgot to mention, and am adding this later, that the overwhelming majority of comments on social media, including tweets, were positive: approving of the paper’s message. There are a whole lot of silent people out there who don’t like cancel culture and abhor the “science needs a reckoning” attitude.

There was a rebuttal published only a couple of days after Krylov et al. came out and accusations that the authors were anti-Semitic because they discussed scientific suppression by the Nazis (the second author of the Krylov et al. piece is Jewish. . .)

The journal is now creating a “portal” for people to weigh in about the paper. But if a paper complaining about cancel culture itself gets so much heated reaction, this bodes very poorly for the future of objective scientific discourse.

I once thought that science would be the last area where the Woke would exercise their policing, but I was wrong. Given the power and respect afforded by many to science, it’s only natural that people who see science as “just another narrative”, or those who want that power and respect to devolve on themselves, would go after science in general.  Although individual scientists of the past are being scrutinized for political or moral stands that wouldn’t pass muster today, remember that it is science itself that is being accused of being harmful, racist, and a vehicle for white supremacy, and “colonialism.”

26 thoughts on “New paper on “cancel culture in science””