Yesterday was World Hijab Day, a day to celebrate a symbol of misogyny and oppression. In its honor(?) we have a thoughtful 15-minute video by Sarah Haider, Executive Director of the Ex-Muslims of North America, about the hijab. Needless to say, she’s almost entirely critical of reasons for wearing the headscarf.

My own view about it has been given many times (e.g., here): to see whether it’s a “choice” or a “mandate,” remove all social, religious. and political pressures to wear it, and see how many women still wear the headscarf.

That’s not an impossible experiment because it’s pretty much what Iran and Afghanistan were like in the 1970s. And most women let their hair fly free.  Sure enough, when the theocracy began in Iran in 1979, a mandatory hijab law was enacted, and women protested by the thousands. It was of no use. They were forced to wear it, and violators were beaten or even jailed for long periods.

Further, if it’s a “choice”, why would you need “morality police” in Iran and Afghanistan to beat women whose hijab doesn’t fully cover there hair? What kind of monstrous culture dictates the beating of women who, exposing a wisp of hair, are supposed to excite the libido of men?

To tell the truth, I think that women who say that their wearing the hijab is a “choice”, a sign of modesty, are largely dissimulating. Many are wearing it to make it obvious that they are in the class of the victimized, a point articulated clearly in Haider’s video by the odious Linda Sarsour, who says “Before wearing a hijab, I was just an ordinary white girl from New York City” (12:57). Now she’s a public victim as a Person of Color. Sarah doesn’t make this point, because she’s too nice to, but listen again to Sarsour.

Many have been forced to wear the veil since they were little girls, and it’s now a habit—no more of a choice than Amish wearing suspenders and black clothes. A sure sign that it’s bogus is shown by those who wear hijabs and then tons of makeup and other fancy garments. How is that supposed to be modest?

It is a sad irony that Western women, including feminists seem to valorize the hijab, for they are valorizing oppression. For that’s where the garment came from: the misogynistic idea that women must cover their hair (and bodies) to avoid exciting the uncontrollable lusts of men. Why shouldn’t the men control their own damn lusts? Again it’s an instance of MacPherson’s Law: when two “progressive” tenets collide—in this case feminism versus Muslim dictates (the culture of the Oppressed)—the women always lose.

My favorite take on the hijab comes from Alishba Zarmeen: 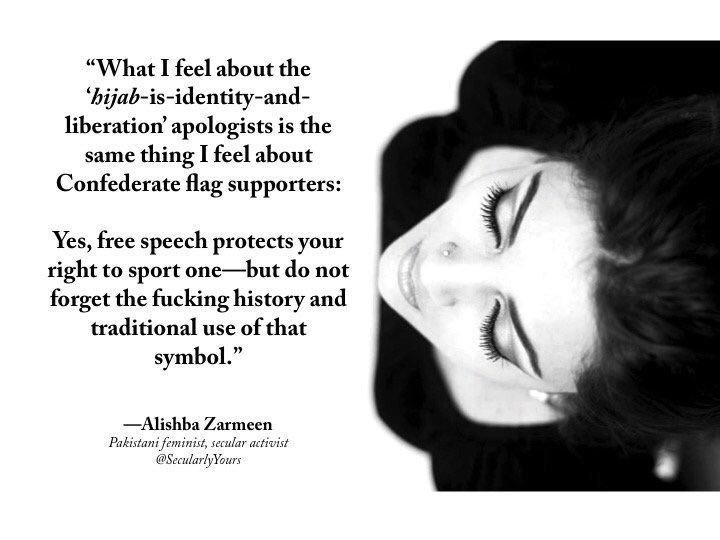 And now the estimable Sarah Haider, who makes a number of good points, many of them related to Zarmeen’s remark above. BTW, I just discovered that Haider has just started a Substack site, “Hold that Thought” that will be a repository of her essays and thoughts.