Everything’s late today because I had to deal with keruffles over the Nature and Scientific American letters.

Now this is a post we’ve really needed: the best cat commercials of all time (click on screenshot to watch ’em all!):

First, a Taylor Swift commercial, a distant third but still good. I believe those are her cats, too:

Here’s an ancillary one; let’s call it 3B. You have to say this about Swift: she loves her moggies!

This is undoubtedly the best cat commercial of all time, and bears repeated watching. Its from EDS (Electronic Data Systems), and I believe aired during the Superbowl:

A cute piece from the Guardian (click on the screenshot): 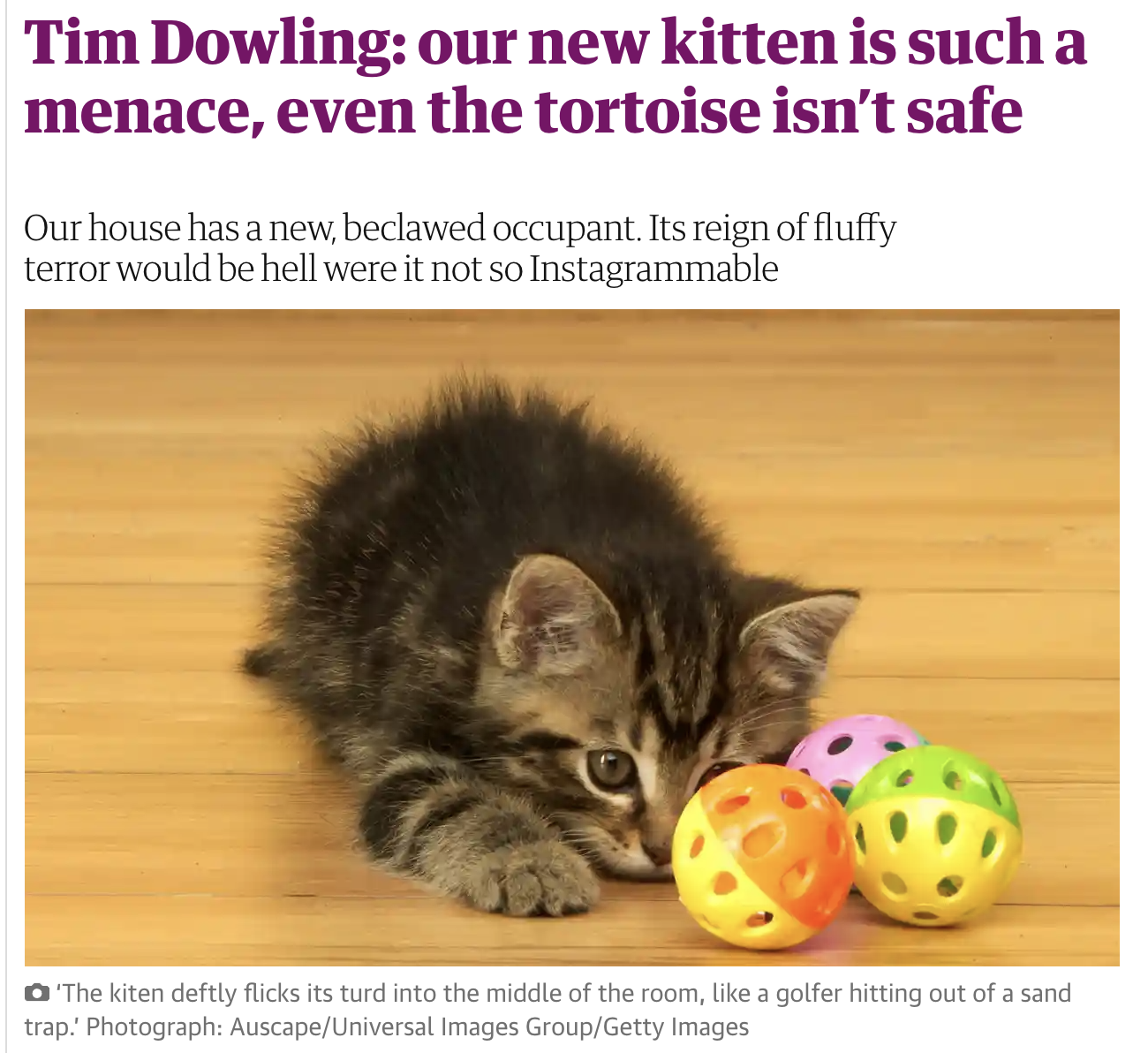 In the 15 years since we last had a kitten, I’d forgotten how much worry is involved: you have to take constant care to avoid stepping on it, and you have to check that it’s not in the dishwasher before you turn it on. You spend half your day looking under things for it, and the other half patiently letting it unknit your jumper from the sleeves inwards, because at least you know where it is. It’s asleep whenever you want to play with it, then it stands on your plate while you’re eating.

At first I spent a lot of time trying to exhaust the cat by playing with it, but it never gets tired of anything. My wife bought a little plastic fishing rod with a length of string and a small stuffed fish at the other end. Using this to entertain the cat is actually a bit like fishing, but unlike a sea bass, the cat is always biting. Eventually, I learned to prop up the rod between two sofa cushions so I could read.

The kitten came knowing how to use a litter box, which is a plus, although the thing it does immediately afterwards – deftly flicking the turd into the middle of the room, like a golfer hitting out of a sand trap – I don’t know where it learned that.

One morning, about a week after its arrival, I come downstairs to find the kitten riding the tortoise around the kitchen

“When you’re no longer cute,” I tell it, “none of this will be tolerated.” In the meantime, however, it seems to understand that everything it does is potentially Instagrammable.

Kolony Kats is a group of people who help feral cats in the streets of Philadelphia. They have a good Facebook page that shows the structures they put up for the cats to get warmth, food, and water, and, most of all safety (one structure for multiple cats is below). All cats are neutered, and the tame ones are put up for adoption. Here are two posts showing the care they give these cats, even taking them to a cardiologist.

They don’t importune you for donations, and it’s hard to find even how to donate, but if you want to throw a few bucks their way, go here. It’s an awesome group.

7 thoughts on “Caturday felid trifecta: Ten best cat commercials of all time; a menacing kitten; a massive cat rescue in Philly; and lagniappe”