Today we have some lovely bird photos from reader Paul Matthews. His captions are indented, and you can enlarge the photos by clicking on them.

For my first Readers’ Wildlife Photo post a few weeks ago, I sent pictures of some exotic northern owls. For this one, I propose something a bit more mundane: common winter birds of Ottawa, with a couple of rarer species thrown into the mix. All these photos were taken this winter.

Many people in Ottawa would surely choose the Black-capped Chickadee (Poecile atricapillus) as the quintessential Ottawa winter bird, even though this species occurs here year-round. Sometimes it seems that chickadees are the ONLY birds in the otherwise deserted Ottawa winter woods. These bold and resourceful birds are fixtures at most winter feeders and have learned to come to feed in the hand, to the delight of the humans doing the feeding. Sometimes I’ve had chickadees land on me when I wasn’t expecting it, which can be quite disconcerting. 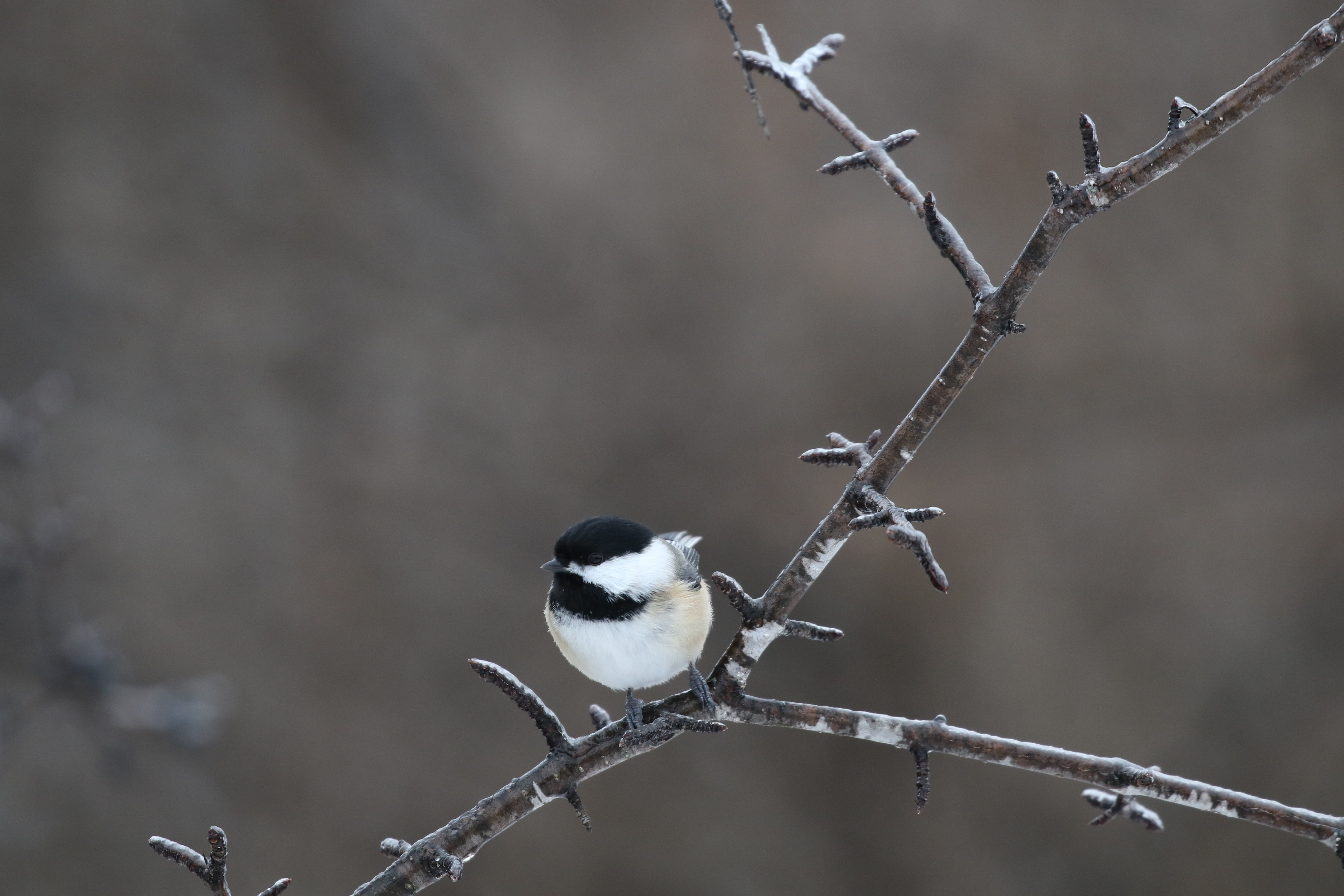 Another common though much less numerous species is the White-breasted Nuthatch (Sitta carolinensis). These nuthatches are often found accompanying chickadees and, like them, will occasionally come to feed in the hand, although they are always much more nervous and reluctant about it. Nuthatches are well-known to be one of the few or only birds to walk down trunks headfirst. 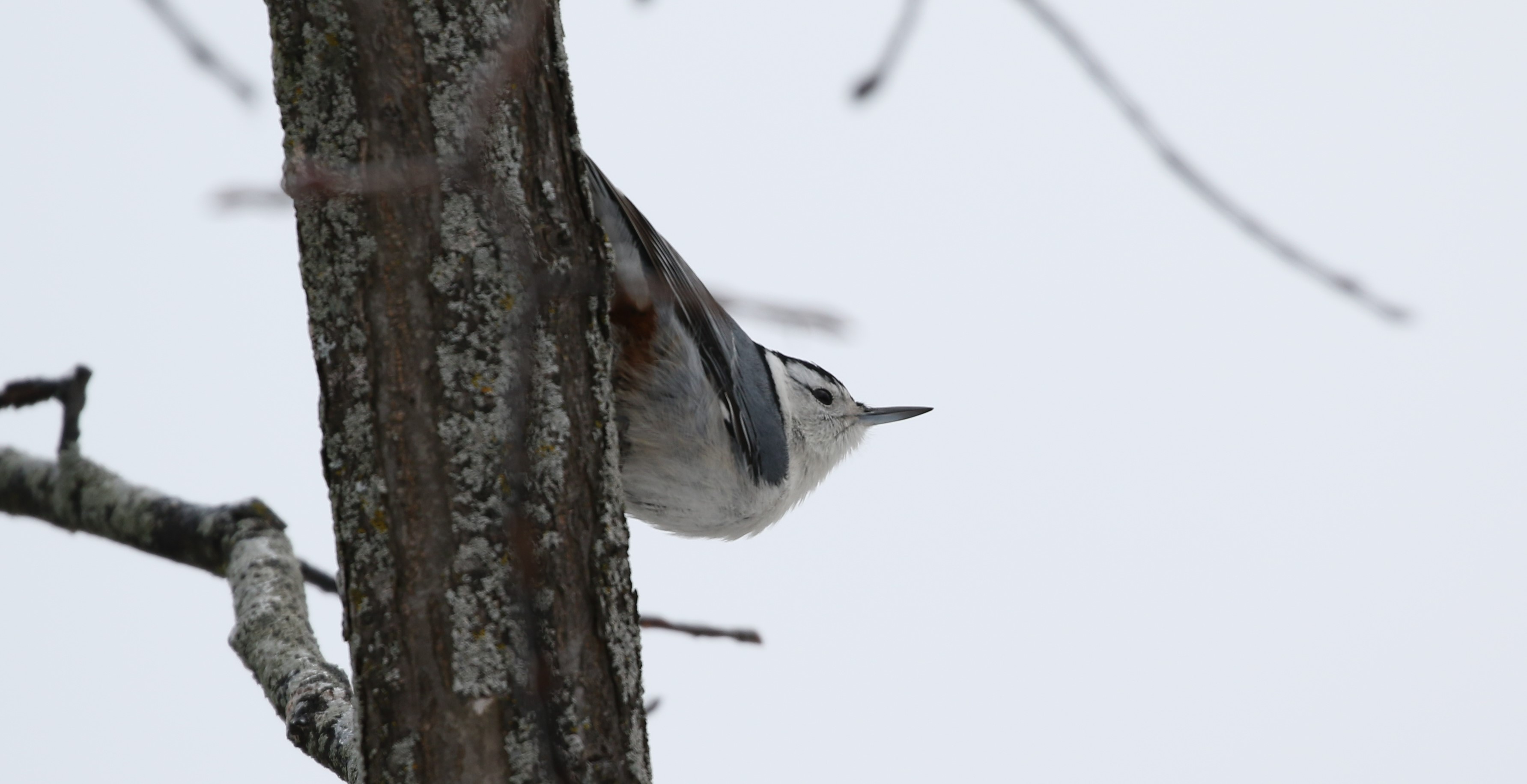 While the previous species is essentially sedentary and associated with deciduous woodlots and forests, the Red-breasted Nuthatch (Sitta canadensis) moves about more with the seasons and is more tied to mixed and coniferous forests. The two species are often found together, however. 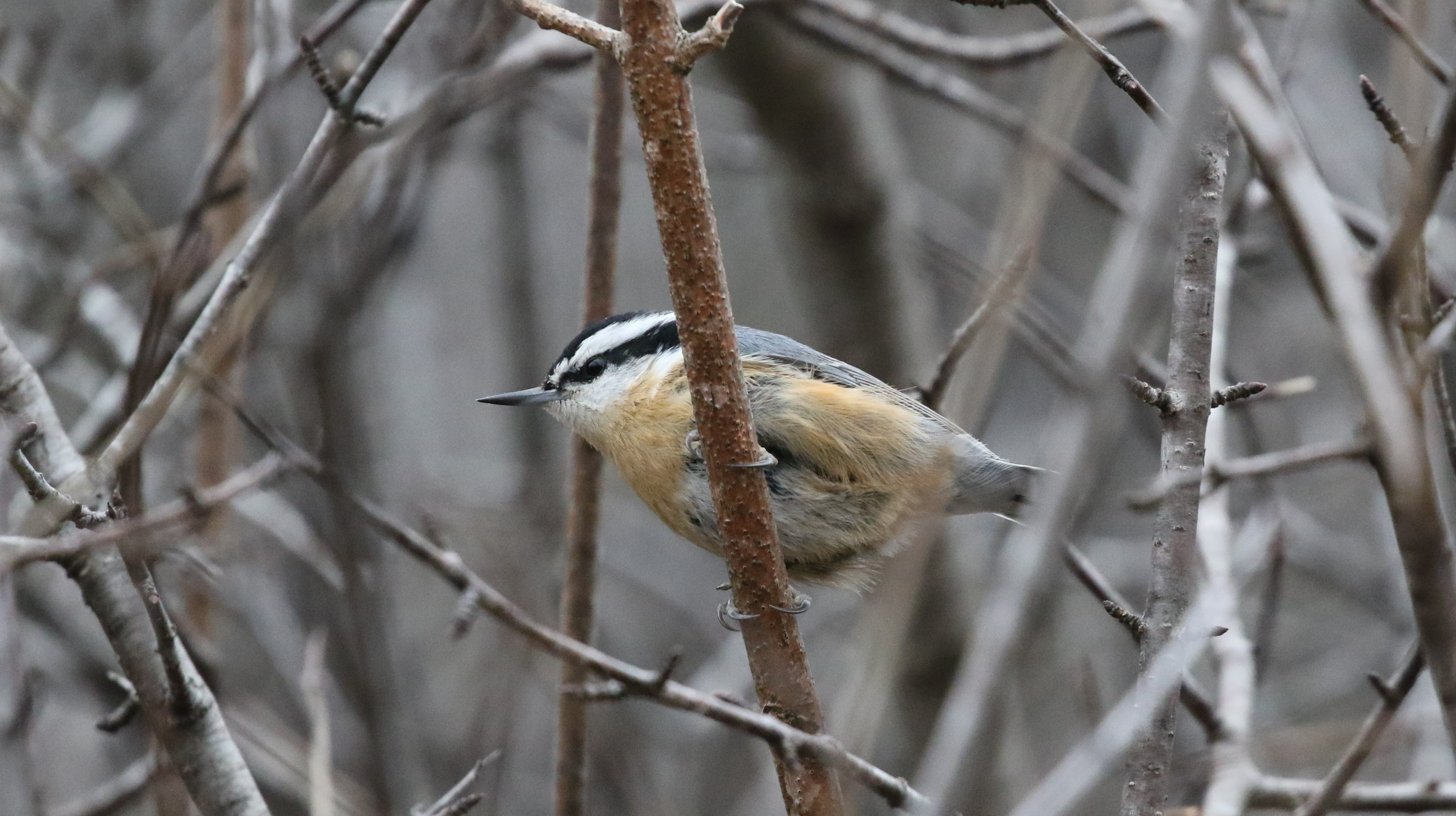 The American Robin (Turdus migratorius) is my candidate for Ottawa’s most familiar bird (i.e., known to the most people). It is a common sight on lawns in the warmer months but also in a huge variety of treed habitats. The first robin is considered a sign of spring but in fact there are always at least a few that overwinter. These ones had found a water source. There’s something very appealing to me about a robin in the snow–I’m not sure why. 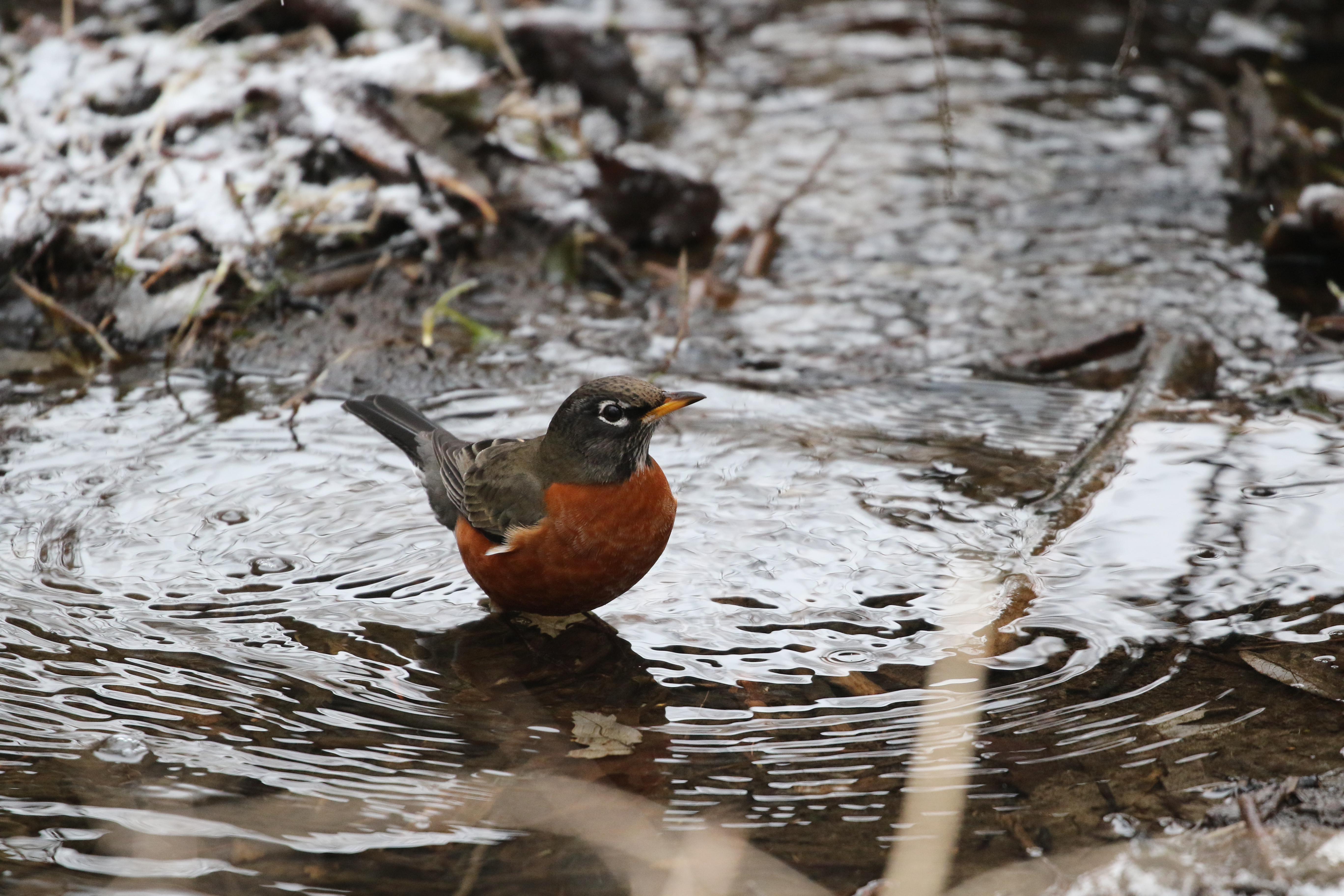 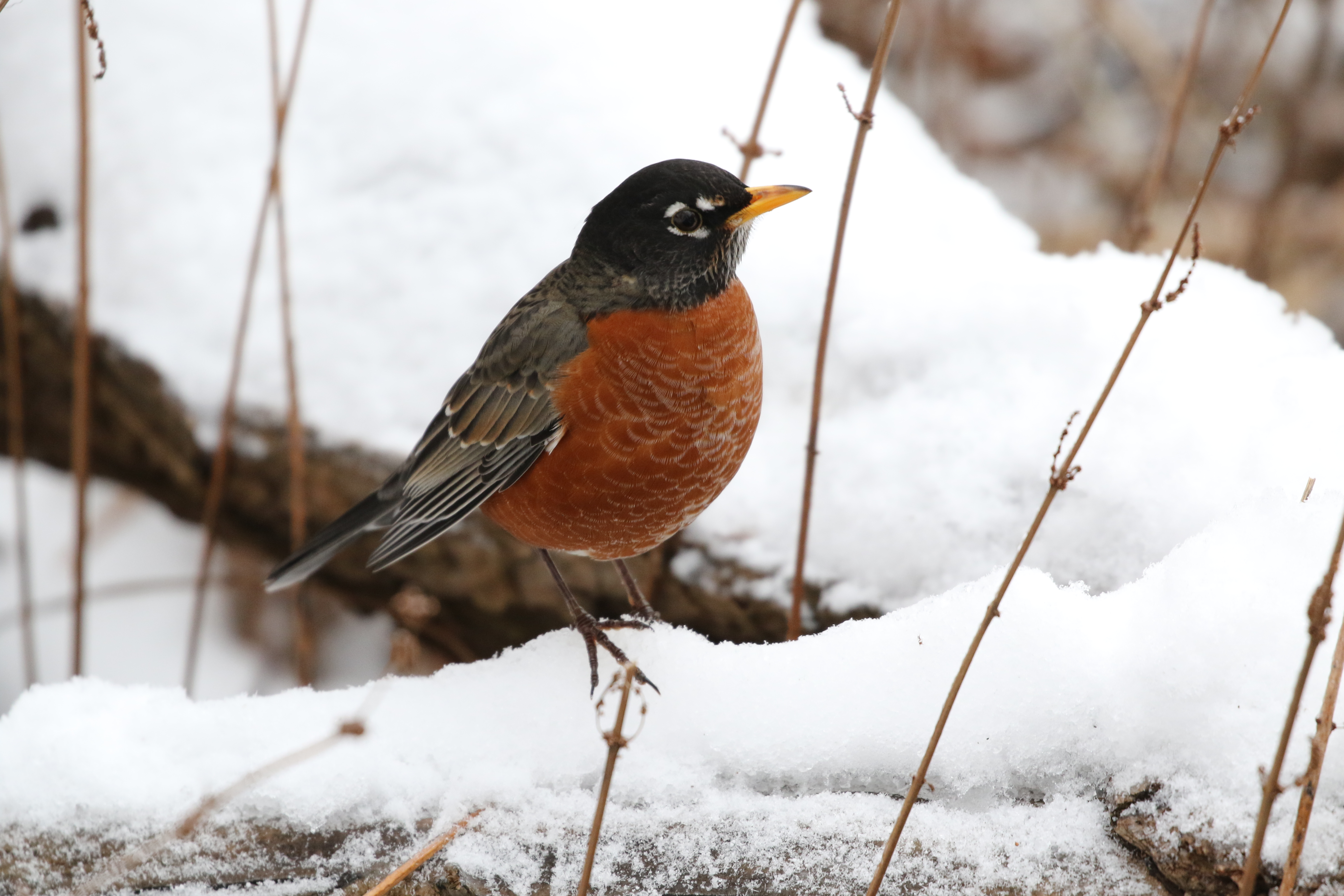 A splash of brilliant red in the bushes: a male Northern Cardinal (Cardinalis cardinalis) brightening up what can be a very grey winter landscape. The heart of the cardinal’s range is well to the south of Ottawa and when I first arrived in the city in the seventies they were quite rare. If a veteran birder took a shine to a newbie, he might tell him (birders were almost all male back then) of a feeder that a cardinal was frequenting. The newbie would be advised to go at first light, which was when the cardinal was most active and likely to come to feed. No such stratagems are required nowadays, as the cardinal population in Ottawa has exploded and they are now very common. 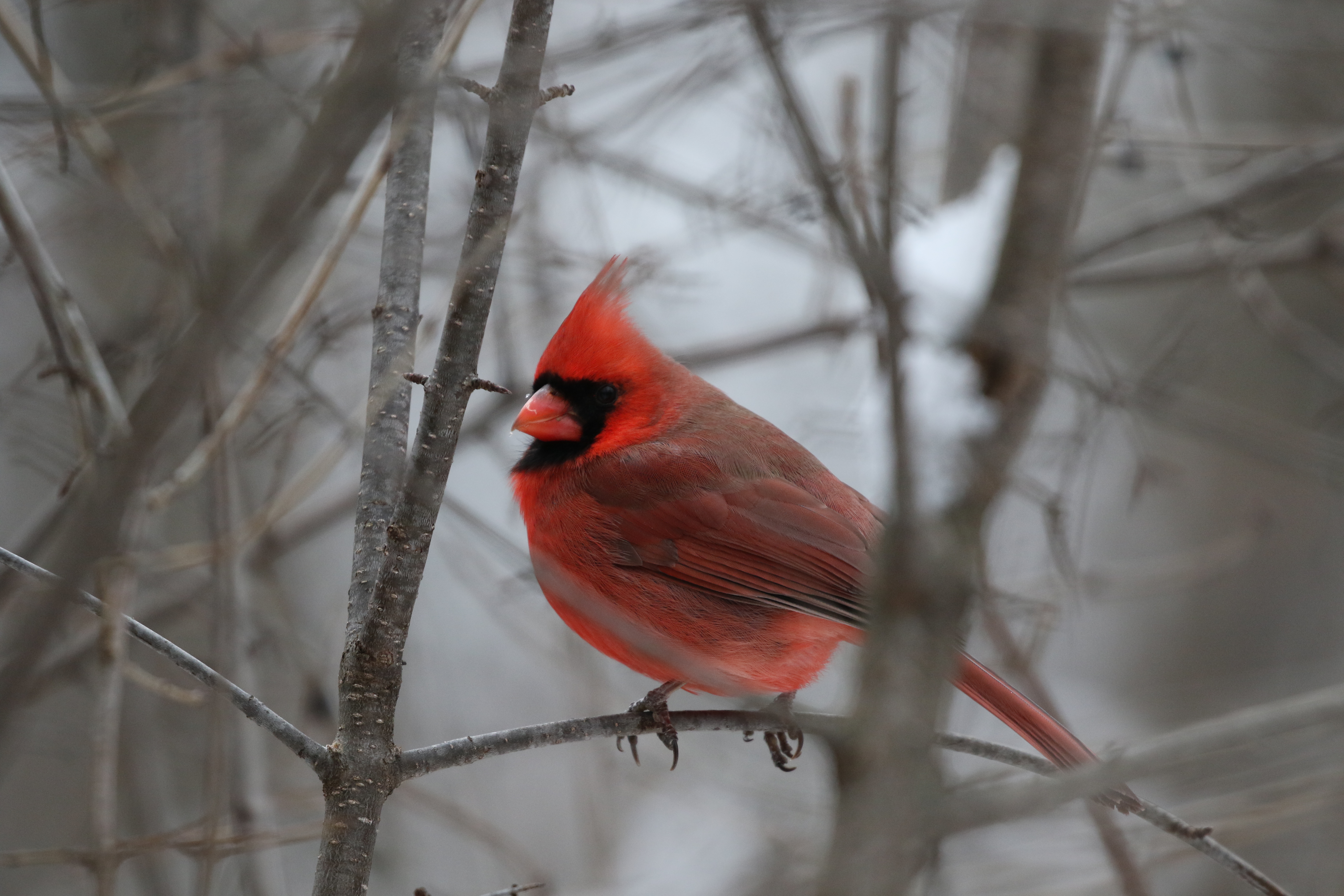 In contrast, sparrows are often considered boring little brown jobs (LBJs), but I find them subtly beautiful. Though a number of species occur here in winter, only one in my book is a true winter sparrow, the American Tree Sparrow (Spizella arborea). The other sparrow species are all more common at other times of year. 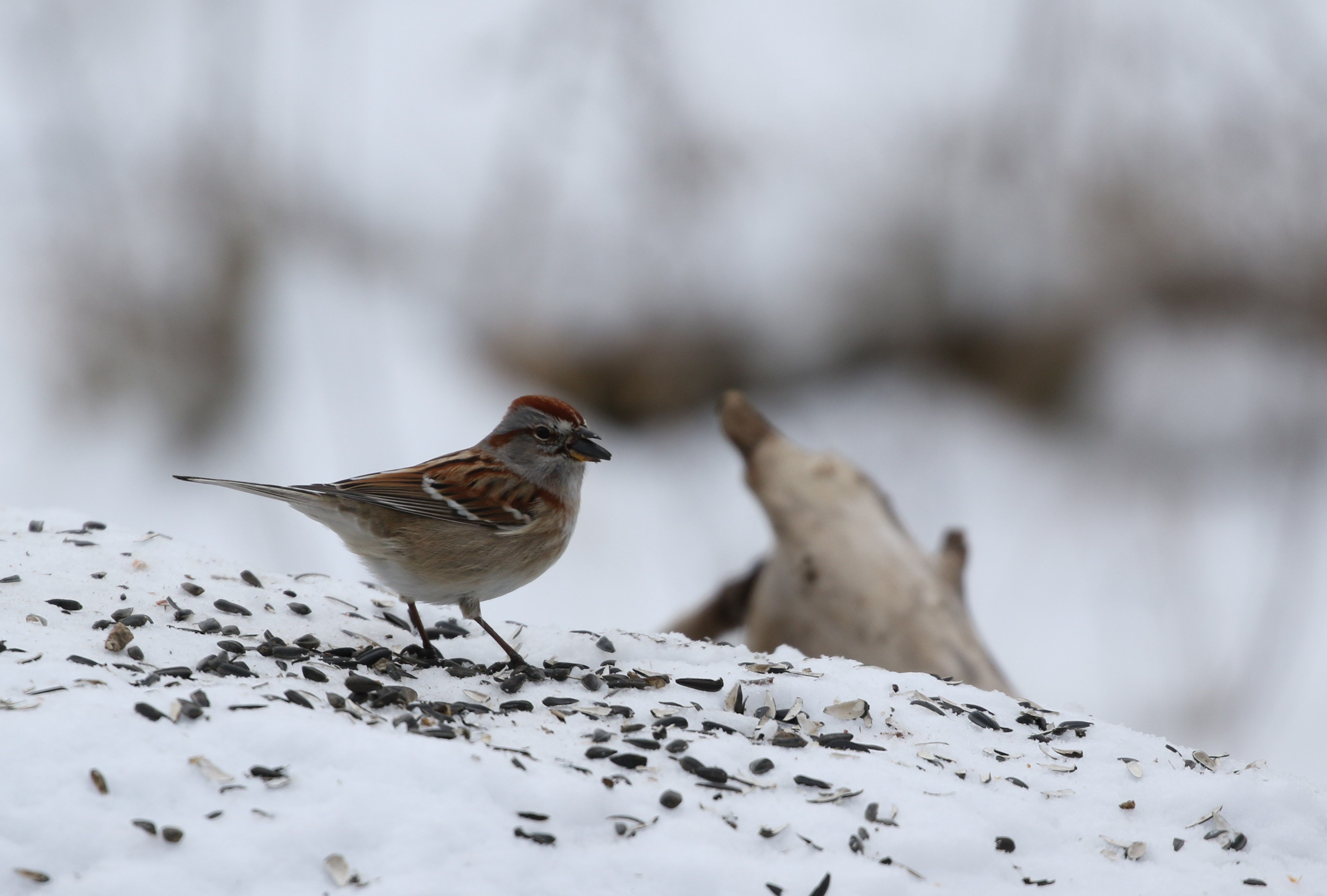 The White-throated Sparrow (Zonotrichia albicollis) is a fairly common breeder and abundant migrant, but scarce in winter. I shot this one early in the winter before the snow had arrived to stay. 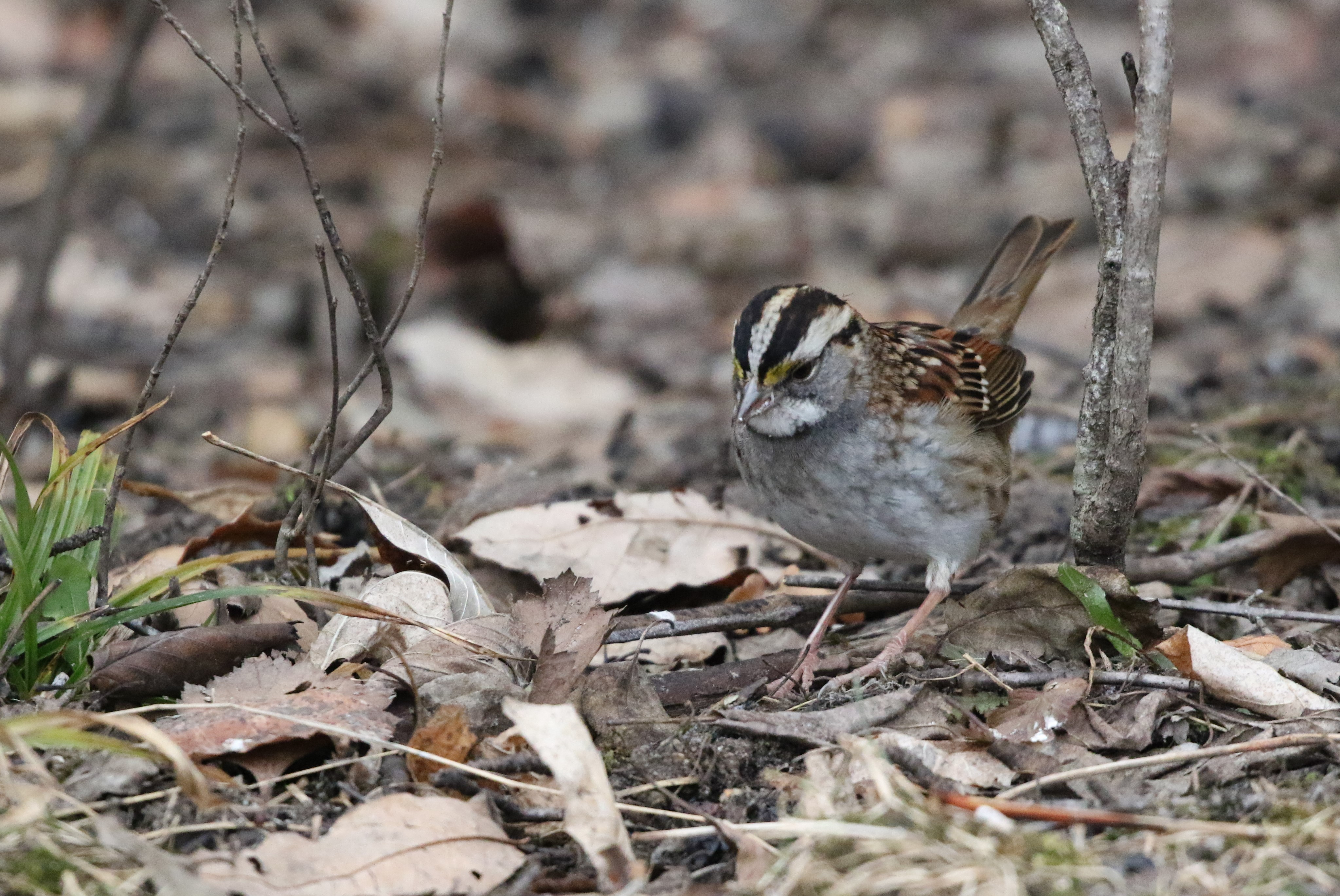 The Harris’s Sparrow (Zonotrichia querula) is a relative of the White-throated Sparrow and extremely rare in the Ottawa area. It has the distinction of being the largest North American sparrow. This one was at a private feeder about an hour’s drive from Ottawa proper. The photo is fairly heavily cropped. 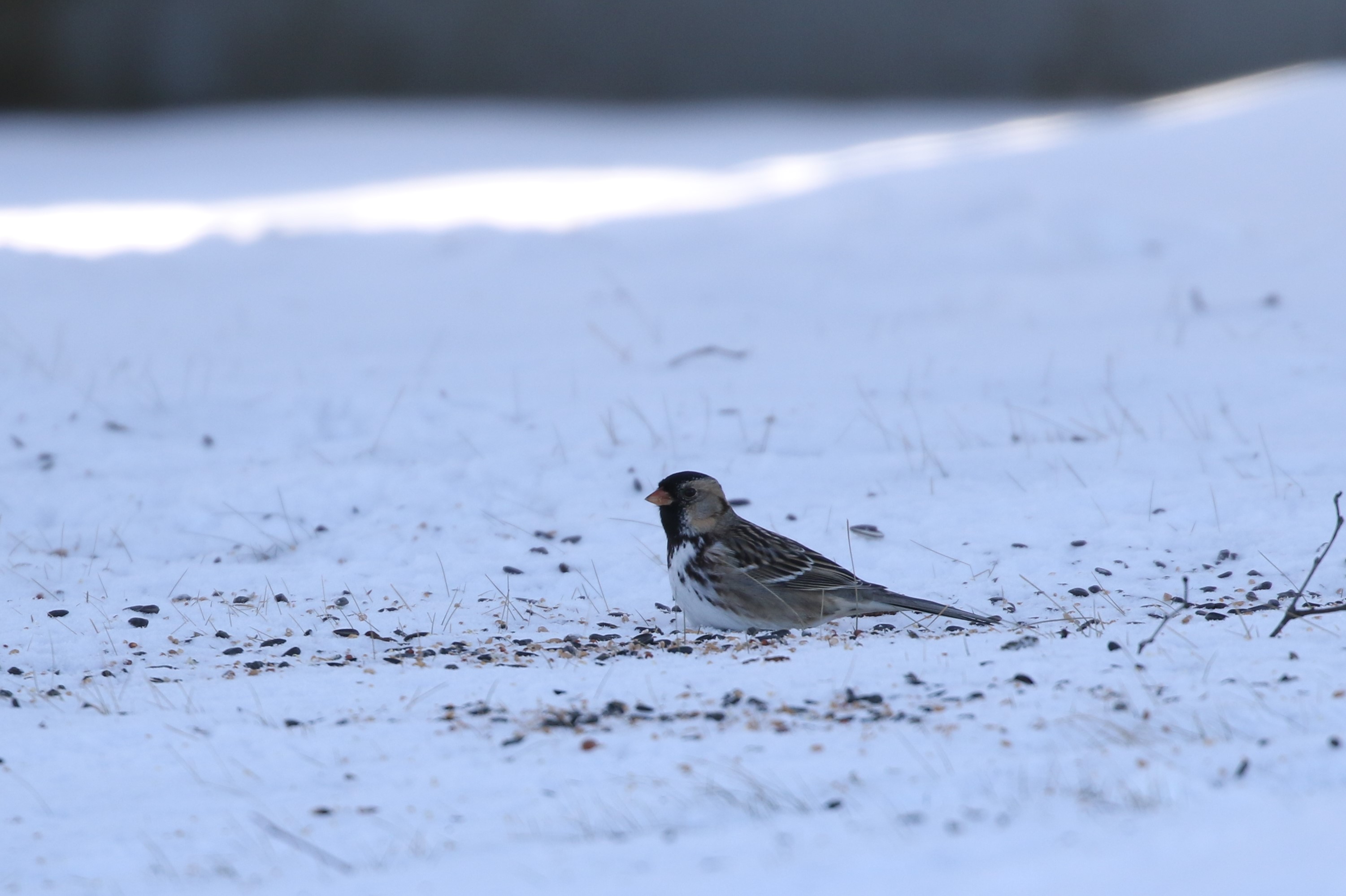 Wrens are familiar garden birds in the eastern US, but they aren’t especially common in Ottawa. The Carolina Wren (Thryothorus ludovicianus) is like the cardinal in some ways: its core range is the Eastern United States and it is non-migratory. Unlike the cardinal, Carolina Wrens continue to only have a toehold in Ottawa: they are scarce and hard to find. Perhaps their smaller body size makes it harder for them to withstand the bitter Ottawa winter temperatures or perhaps the food at typical feeders is better suited to cardinals than wrens–I really don’t know. 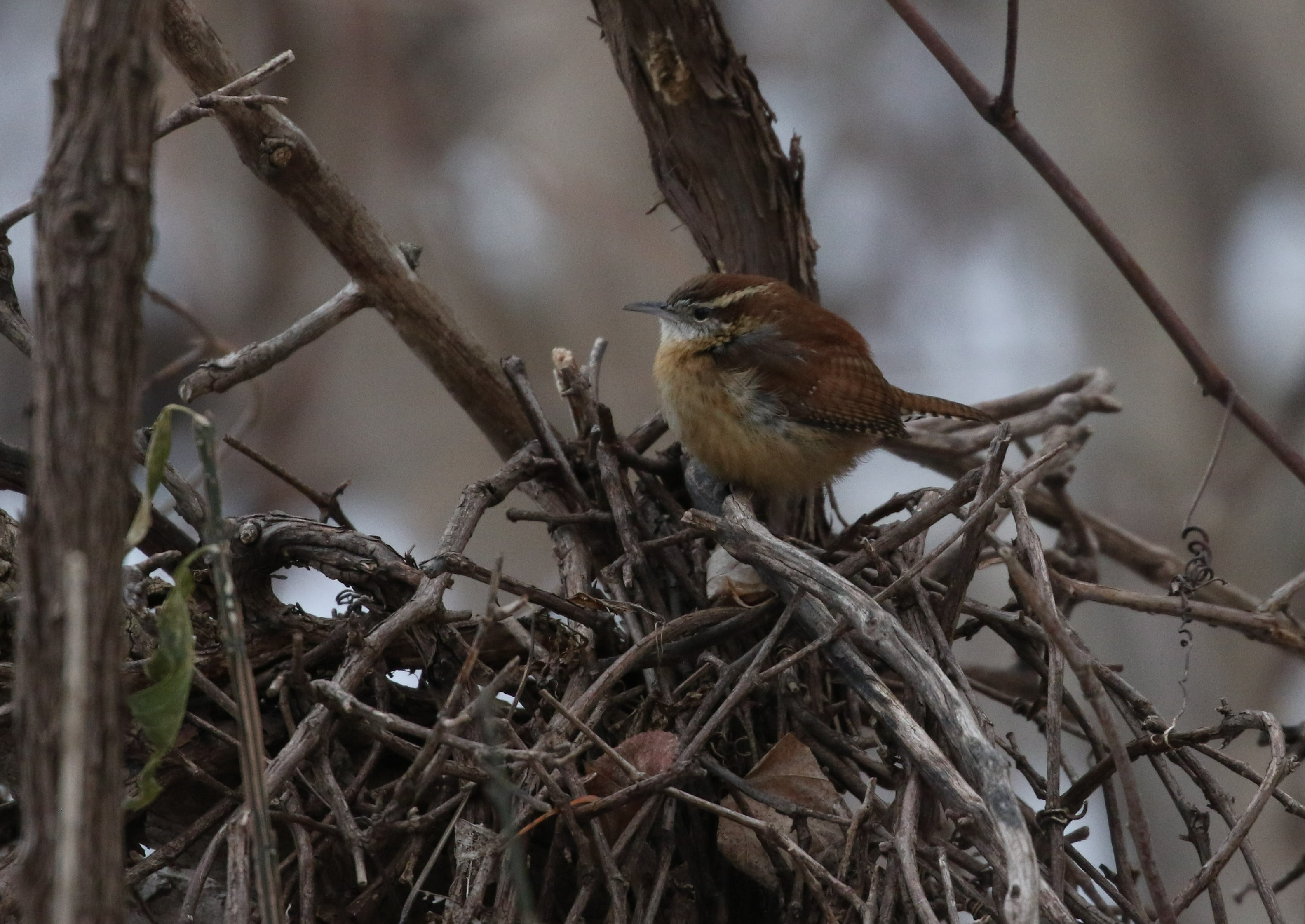 The English name of the Winter Wren (Troglodytes hiemalis) is really a misnomer for Ottawa. These wrens are fairly common breeders in mixed and coniferous woods and also fairly common on migration. They are tough but they are tiny: only occasionally does one actually try to overwinter here. This one was at the same outflow as the robins above. Last time I checked it had managed to survive one brutal cold snap but now we’re into another, followed by a big dump of snow. I’m hoping it makes it but sadly the odds seem stacked against it: it’s a long time till spring. 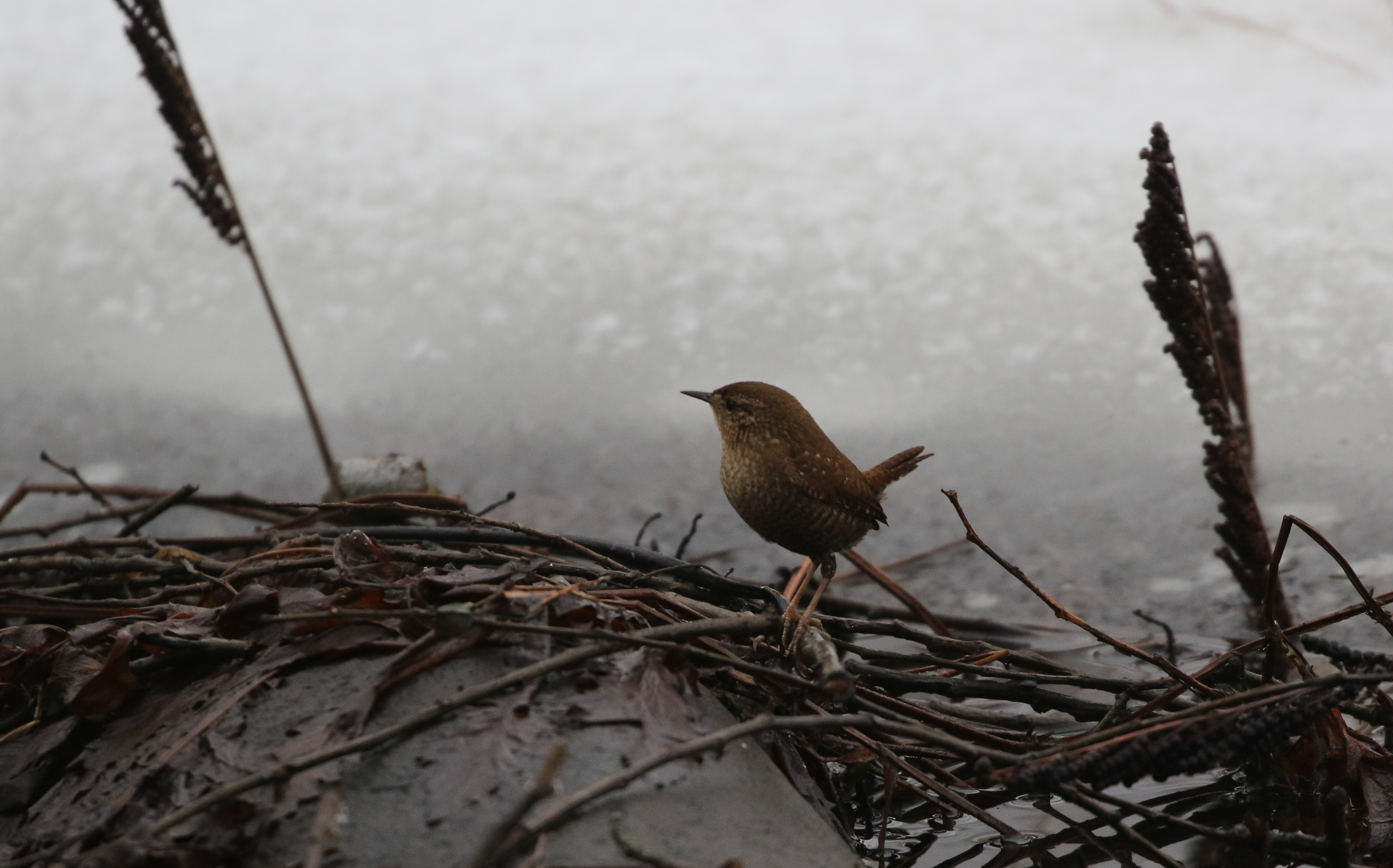 As lagniappe, a photo that should surely please our host. (Yes, they get fed.) [JAC: Mallard, Anas platyrhynchos] 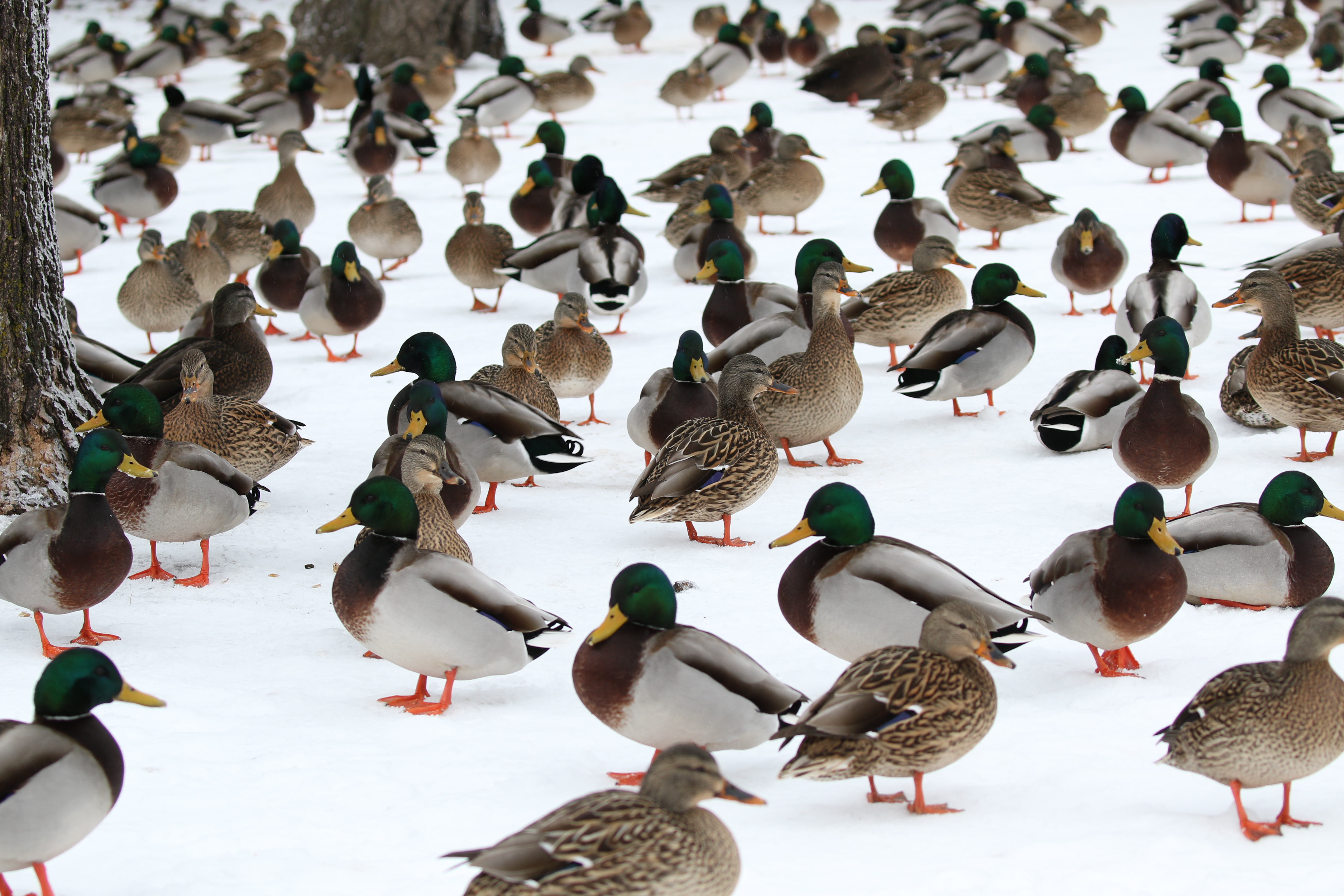