The Epstein-Barr virus has been associated with a variety of diseases; as Wikipedia notes (my emphasis, and I’ve left in the footnotes so you can consult 11-13, which I’ve put in bold):

The Epstein–Barr virus (EBV), formally called Human gammaherpesvirus 4, is one of the nine known human herpesvirus types in the herpes family, and is one of the most common viruses in humans. EBV is a double-stranded DNA virus.[2]

It is best known as the cause of infectious mononucleosis (“mono” or “glandular fever”). It is also associated with various non-malignant, premalignant, and malignant Epstein–Barr virus-associated lymphoproliferative diseases such as Burkitt lymphoma, hemophagocytic lymphohistiocytosis,[3] and Hodgkin’s lymphoma; non-lymphoid malignancies such as gastric cancer and nasopharyngeal carcinoma; and conditions associated with human immunodeficiency virus such as hairy leukoplakia and central nervous system lymphomas.[4][5] The virus is also associated with the childhood disorders of Alice in Wonderland syndrome[6] and acute cerebellar ataxia[7] and, based on some evidence, higher risks of developing certain autoimmune diseases,[8] especially dermatomyositis, systemic lupus erythematosus, rheumatoid arthritis, Sjögren’s syndrome,[9][10] and multiple sclerosis.[11][12][13][14] About 200,000 cancer cases globally per year are thought to be attributable to EBV.[15][16]

Infection with EBV occurs by the oral transfer of saliva[17] and genital secretions. Most people become infected with EBV and gain adaptive immunity. In the United States, about half of all five-year-old children and about 90% of adults have evidence of previous infection.[18] Infants become susceptible to EBV as soon as maternal antibody protection disappears. Many children become infected with EBV, and these infections usually cause no symptoms or are indistinguishable from the other mild, brief illnesses of childhood. In the United States and other developed countries, many people are not infected with EBV in their childhood years.[19] When infection with EBV occurs during adolescence, it causes infectious mononucleosis 35 to 50% of the time.[20] In 2022, it has been shown that EBV infection increase the risk of developing multiple sclerosis by 32-fold.[21]

EBV infects B cells of the immune system and epithelial cells. Once EBV’s initial lytic infection is brought under control, EBV latency persists in the individual’s B cells for the rest of their life.[17][22]

Here are two EBV virl particles with some proteinaceous spheres (not nuclei!) containing the viruses’ genetic material.  I had mono about twenty years ago, so I’m probably carrying the virus, too. 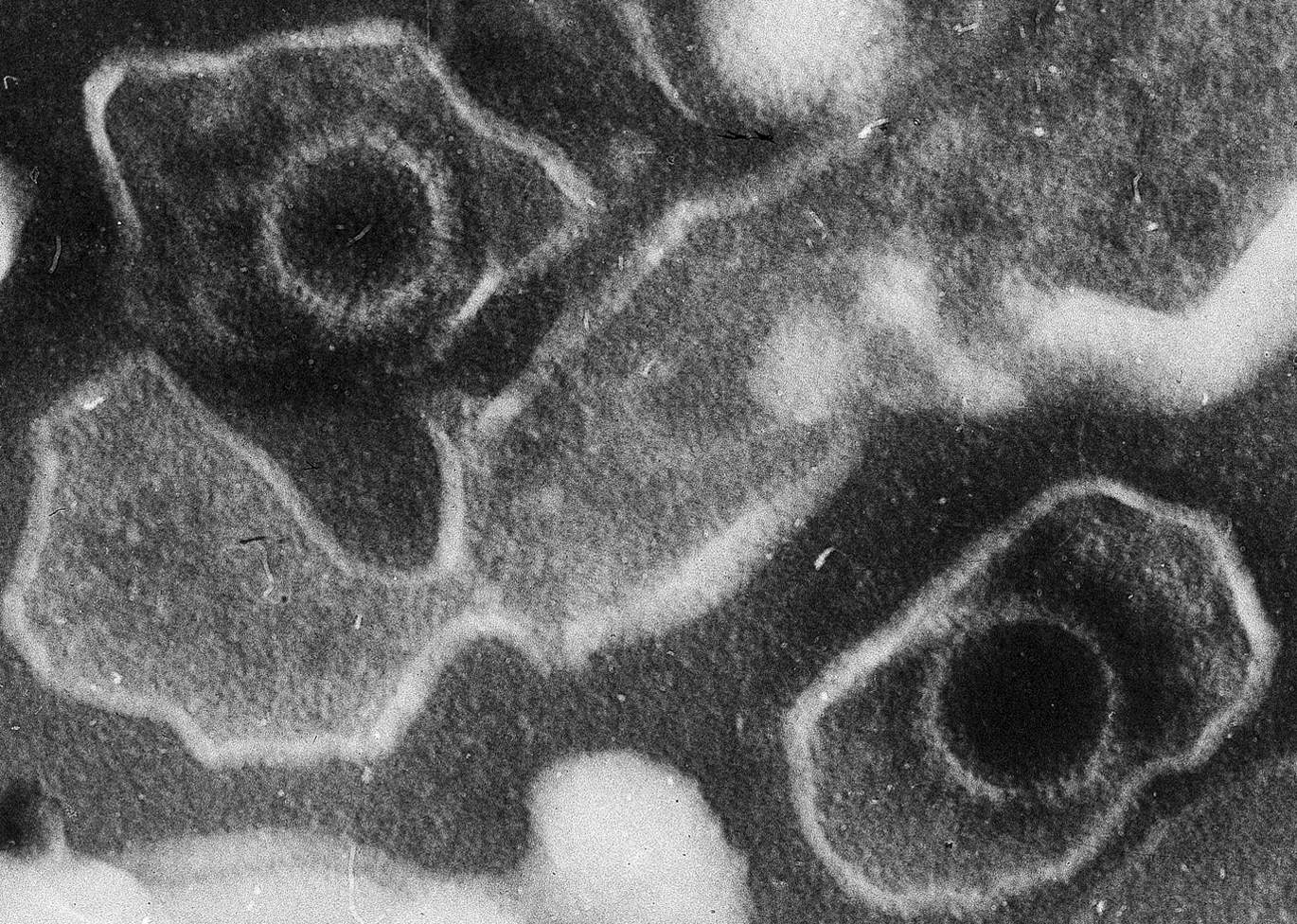 At any rate, note that the association with the virus (henceforth “EBV”) with multiple sclerosis (“MS”) has been suggested before (references 11-13, ref. 14 is this paper). I haven’t read the first three papers, but #14 is just out in Science, and I’ll mention it briefly today. It surely is, given the discussions, the strongest evidence to date for an EBV cause of MS.

The paper was called to my attention by the tweet below from Matthew. And, apparently, this is the strongest suggestion yet that EBV actually causes multiple sclerosis.  If this proves to be the case, and the evidence is pretty strong, then this opens the way to preventing MS, most likely via I suspect shots in the young, because once the diease develops, a shot wouldn’t work. In fact, Moderna is at this moment making an mRNA vaccine against the virus. (Although, coronaviruses like Covid-19 have RNA instead of DNA as their genetic material—EBV has DNA—it doesn’t matter what genetic material the virus uses to replicate, for the mRNA in a vaccine is used by the body to make viral protein that then activates the host’s immune system.)

One note: MS is a disease that appears when your immune system attacks the myelin sheath surrounding the nerves, which disrupts nerve impulses. That in turn can lead to multiple effects, including difficulty in breathing, walking, and seeing. All of us have known people with MS, and you’re probably aware that the disease varies widely in its severity, with of the afflicted dying very quickly and others living a life of nearly normal span. On average, MS takes away five to ten years from your life, and a lot of that life is unpleasant.

Here’s the tweet that alerted Matthew, and then me, to the new results:

Phenomenal paper just published in Science persuasively demonstrating that EBV causes most if not all multiple sclerosis.

The paper below with the nearly dispositive data is free; click screenshot for access or get the pdf here. The reference is at the bottom.

(There’s also a News and Views piece on this article, which you can get for free by clicking the screenshot):

Now the best way to see if the virus causes the disease is to inject virus-free humans with EBV, and see if the injected group gets MS more often than does a control (noninjected) group. But since 90% of adults are infected anyway, and this experiment is highly unethical, one has to find other ways.

These researchers did the next best thing: a retrospective analysis of blood serum left over from AIDS tests on more than 10 million U.S. military personnel.  The criterion for “causality” here is the philosophical one: A causes B if you never get B unless you have A beforehand. (This doesn’t mean, of course that A is the sole cause of B.) As the authors say, “causality implies that some individuals who developed MS after EBV infection would not have developed MS if they had not been affected by EBV.” Note that they say “some individuals”, as there may be other causes of MS. But this is more than an association study, as EBV negative individuals could be tested for infection status during their period of activity duty, and then screened for MS to see whether the disease is associated with earlier infection.

The ten million soldiers were screened over a period of 20 years, and the leftover serum, fortunately, had been stored.  All samples were analyzed for EBV infection and then the MS status of the individuals determined during the period of active duty.

5.3% of individuals whose blood were tested were EBV-negative (as I said, most of us are infected) and in a sample of ten million that’s about half a million people.

Among the personnel examined, 955 MS cases were identified, of which 801 cases had several blood samples available taken at differen times. For each one they looked at three serum samples taken BEFORE onset of the symptoms. Each case was matched with at least one non-MS-afflicted control individual of same age, sex, ethnicity, branch of service, and date of blood collection.

The results were pretty compelling. Under the causation scenario, you’d expect MS to develop almost entirely in the group that were initially EBV negative but then got infected, and only then did they develop MS.

And that’s what they found. To quote the paper:

Only one of the 801 MS cases occurred in an individual who was EBV-negative in the last sample, which was collected at a median of 1 year before MS onset [hazard ratio (HR) for MS comparing EBV-positive versus EBV-negative = 26.5; 95% confidence interval (CI): 3.7 to 191.6; P = 0.001, conditional logistic regression]. At baseline, 35 MS cases and 107 controls were EBV-negative. All but one of these 35 EBV-negative MS cases became infected with EBV during the follow-up, and all seroconverted before the onset of MS (fig. S3). The median time from the first EBV-positive sample to MS onset was 5 years (range: 0 to 10 years), and the median time from estimated EBV seroconversion, defined as the midpoint between the last seronegative sample and the first seropositive sample, to MS onset was 7.5 years (range: 2 to 15 years).

Remember, all of the 801 cases were EBV negative at the first sampling. Then all but one of the individuals who developed MS had gone from EBV negative to EBV positive. (The authors discuss the one outlier case, but you can read that for yourself.) To see if it was really EBV that was associated with the onset of MS, they looked at other viruses as well, and also looked at other disease markers that could show whether MS had already begun (but without physical symptoms) when the patients were still EBV-negative. (They didn’t find that.)

They did other tests as well trying (like good scientists) to try to rule out a causal role of EBV in MS. They ruled out “confounding by unknown factors” because of the strong association between EBV infection and later development of MS. No risk factor could account for the huge increase in MS propensity among those who went from EBV negative to EBV positive.

The other factor was “reverse causation”: perhaps EBV doesn’t cause MS, but the early development of MS, not detected clinically, could make a patient more susceptible to EBV infection. This is ruled out because only the EBV virus was associated with the pathology, while one would expect the “reverse causation” syndrome to make MS patients more susceptible to other viruses.  That wasn’t seen.

But a better tactic would be not to get the disease in the first place, and the tweet below suggests a vaccine that might do this is in development. And if EBV is associated with all those diseases mentioned above, like cancer and inflammatory bowell disease then a jab when young might stave those off, too!

Moderna have dosed their first patient with their anti-*EBV* mRNA vaccine. I hope this will be their biggest contribution (which is saying something).

👏Moderna moving forward w/ this despite that other virus!https://t.co/LeiFwaQUiL pic.twitter.com/N6D4wR9uwp