Welcome to Monday, January 10, 2022: National Bittersweet Chocolate Day.  It’s also National Oysters Rockefeller Day, National Gluten-Free Day, Houseplant Appreciation Day, Save the Eagles Day, and, in the Falkland Islands, Margaret Thatcher Day.  She’s a big deal there since she was PM during the war with Argentina, and here’s a photo of her statue (on Thatcher Drive) that I took in Stanley while visiting in November, 2019: *At last a journalist agrees with me: we ailurophiles are getting fed up with the Bidens’ lame promises of a First Cat—promises that have been constant since before he took office. A moggy was identified was vetted before the First D*g, and they even got rid of that problematic d*g. Then they adopted a German Shepherd puppy. Where’s the damn cat? It’s been over a year now. Crickets. . . .

President Biden has a problem with expectation-setting. He has yet to fulfill lofty promises on the pandemic, voting rights, and Build Back Better. Most egregiously, his administration has toyed with America by promising a White House cat that has yet to materialize.

Monday appeared to finally bring an end to this Long National Nightmare, but as always with this White House and cats, nothing was straightforward.

. . . So, where does this leave those of us who got a little too excited about the second coming of Socks the Cat? Well, kind of in the same place we’ve been for more than a year. I’d like to trust the Bidens when they say this cat’s arrival is imminent, just as I want to believe that the administration is going to ship out free COVID-19 tests in a timely fashion and find a way to salvage the president’s agenda. But I’ve been burned before, so I won’t believe it until I see claw marks on the Oval Office curtains.

Yes, we ailurophiles are hissing mad. Here are two others:

it feels honestly like the lack of a white house cat is just another in a stack of disappointments. Does it MATTER? Oh fuck no. But do I still feel kinda shit that I’d imagined a happy little cat wandering the WH and that hasn’t happened? YEAH.

Pretty sure I was promised two important things: student debt relief and a cat in the White House.

Neither of these things have occurred. We need to talk, Joe.

I am told the cat — a female — will join the Biden family at the White House in January. @MichaelLaRosa46 confirms the cat arrival.

*I swear, how horrible does a regime have to be before we stop getting in bed with it because of oil?  Saudi Arabia is a notorious human rights violator, and three years ago put a princess in jail (along with her daughter) for criticizing the regime. But that’s not the only way to get in stir in Saudi. Get a load of this story:

A Saudi princess, a critic of her country’s government who was jailed nearly three years ago after publicly questioning government policy, has been released, a legal adviser to her family said on Sunday.

The princess, Basmah bint Saud, returned home on Thursday with her daughter Suhoud al-Sharif, who was imprisoned with her, according to the legal adviser, Henri Estramant.

But it remained unclear whether the women would be allowed to travel abroad, a pressing issue because Princess Basmah needs medical care not available in Saudi Arabia for a heart condition, Mr. Estramant said.

Princess Basmah was among a number of prominent Saudi activists, dissidents and members of the royal family either jailed or put under house arrest during the rise of Crown Prince Mohammed bin Salman, who has consolidated his grip on the kingdom since his father, King Salman, ascended to the throne in 2015.

Prince Mohammed is one of the most divisive rulers in Saudi history. He has earned plaudits at home and abroad for loosening social restrictions and seeking to diversify the economy away from oil. But also punctuating his rise have been a disastrous military intervention in Yemen and a disregard for human rights, including the killing of the Saudi journalist Jamal Khashoggi by Saudi agents inside the Saudi Consulate in Istanbul in 2018.

The Princess, shown below from the NYT, never stood trial for anything: 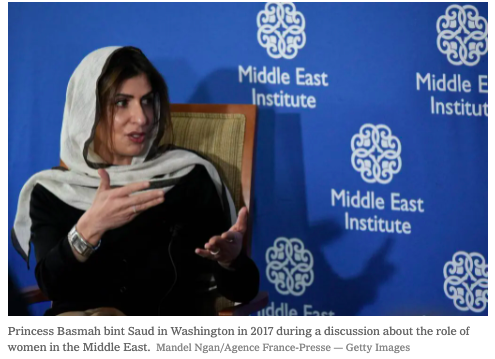 *A horrible fire yesterday in a Bronx apartment building killed at least 19, including 9 children, and injured at least 63. The building was 19 floors high, and there were victims on every floor. Firefighters showed up within three minutes but it was already too late: people died from smoke inhalation. The fire was apparently caused by a malfunctioning space heater. It’s one of the deadliest fires in New York history.

*This is unbelievable. In an article about a car/van crash in the West Bank that killed 8 Palestinians and injured two, the Associated Press manages to work the “Occupation” into it somehow, even though it’s totally irrelevant. I’m going to give you the whole short article:

JERUSALEM (AP) — A truck and a van collided on a narrow two-lane highway in the occupied West Bank on Thursday, killing eight Palestinians and injuring another two, according to Israeli medics.

Palestinian President Mahmoud Abbas declared Friday a day of mourning for the victims, who he described as “martyrs of trying to make a living.” Thousands of Palestinian laborers work in Jewish settlements along Highway 90, which runs through the Jordan Valley.

Videos circulating online appeared to show the truck slamming into the van head-on as the van sought to make a left turn off the highway.

Israel’s Magen David Adom rescue service confirmed the seven deaths and said three people were evacuated by military helicopter for medical treatment. Israeli and Palestinian media later reported that one of the injured had died.

Israel captured the West Bank in the 1967 war, and Palestinian want it to form the main part of their future state.

Tens of thousands of Palestinians work in Israel and Israeli settlements, where wages are much higher than in the parts of the West Bank administered by Abbas’ Palestinian Authority. The economic disparity largely stems from Israel’s 54-year occupation of the territory and the restrictions it imposes on the more than 2.5 million Palestinians living there. [JAC: and from the Palestinians’ refusal to accept half a dozen peace proposals. They want the erasure of Israel far more than they want prosperity.]

The Palestinians and most of the international community view the settlements, home to nearly 500,000 Jewish settlers, as illegal and an obstacle to resolving the decades-old conflict.

This is all gratuitous Israel-bashing; imagine the level of Israel-hatred necessary to report a vehicular crash this way, even despite the Israelis trying to rescue the victims! And imagine the AP thinking that this way of reporting is okay.

Stuff that happened on January 10 includes:

Ceasar wasn’t supposed to leave his province, Cisalpine Gaul, to enter into Italy proper, which was ruled by Rome. This meant civil war.  And what he said has itself become famous, “The die is cast.”: 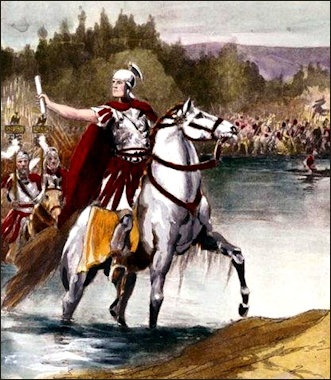 A first edition of this puppy, bound with Paine’s other pamphlets, will run you a mere $60,000: 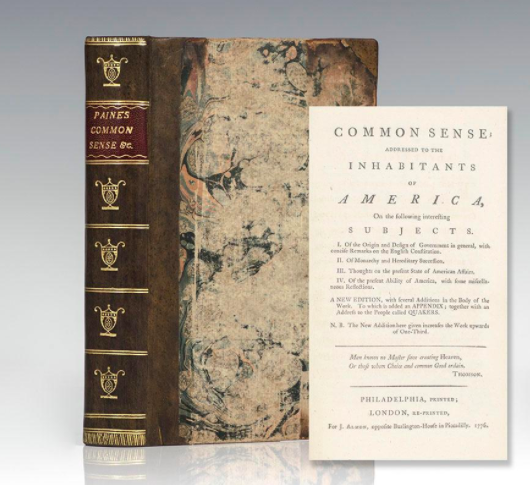 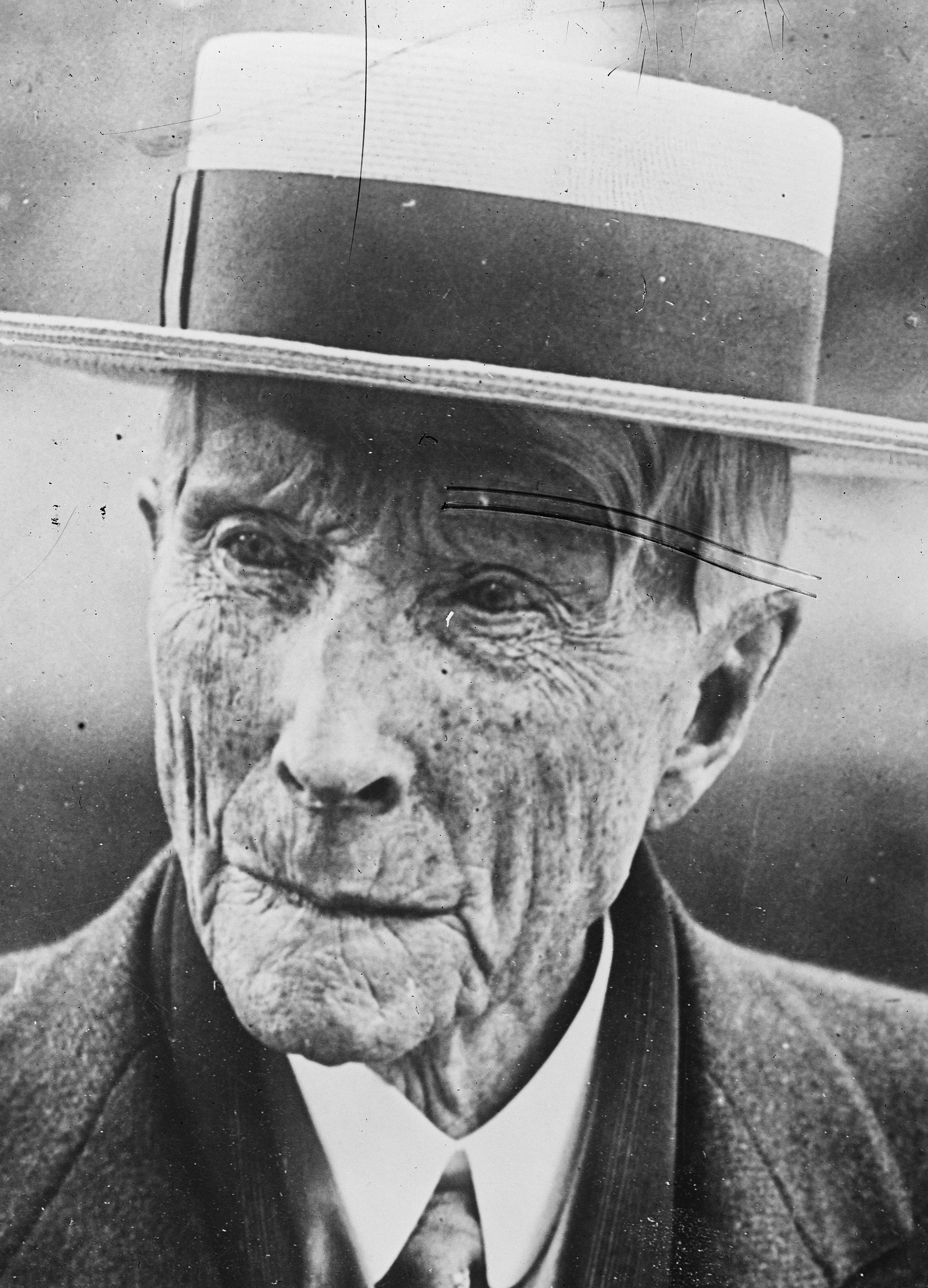 Here’s the “Lucas Gusher” at Spindletop, photographed exactly 120 years ago (from Wikipedia):

Spindletop was the largest gusher the world had seen and catapulted Beaumont into an oil-fueled boomtown. Beaumont’s population of 10,000 tripled in 3 months and eventually rose to 50,000. Speculation led land prices to increase rapidly. By the end of 1902, more than 500 companies had been formed and 285 wells were in operation. 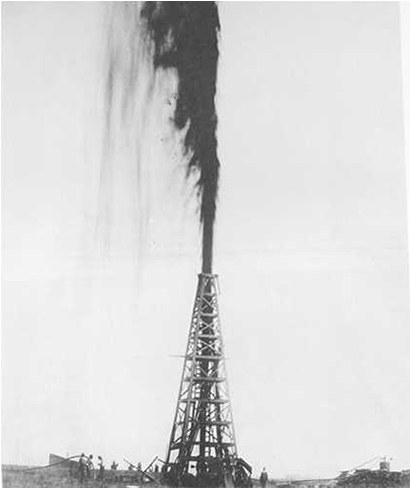 Although the place was pricey, I’d dine out there when I could afford it as a graduate student in NYC. Their corned beef and pastrami were incredible, and copious(see below). And you got a huge bowl of pickles with your sammy (I preferred the half sours.)

The deli’s corned beef and pastrami, celebrated by smoked meat connoisseurs nationwide, were cured in the store’s cellar using Steiner’s own recipe in a two-week-long curing process. The Carnegie Deli used a half-ton of brisket to prepare a week’s supply of corned beef by the time of his death. Steiner admitted, “You could eat it after seven days, but if you wait until the 13th you’re in heaven.” The Carnegie Deli was the favorite hangout of comedian Henny Youngman, and Adam Sandler included a reference to the deli in “The Chanukah Song” in 1996. Steiner was eulogized by comedian Henny Youngman as “the deli lama.”

Here’s one of their pastrami sandwiches, would would provide three meals for a hungry and impecunious student.  Any comment saying “That’s disgusting” or “Too much food” will be expunged, for it shows your ignorance of delis: 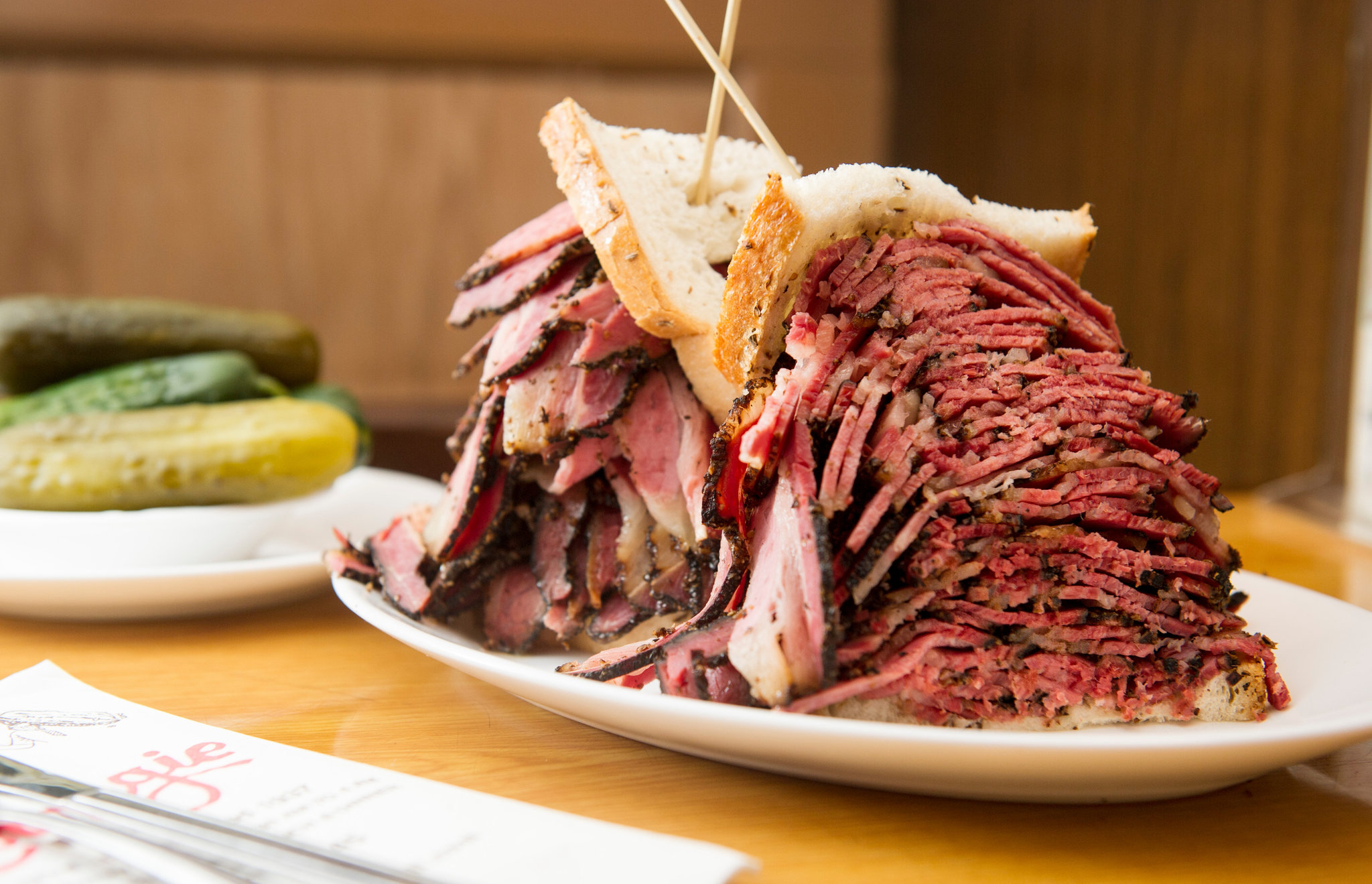 A screen test for “Rebel Without a Cause” with Mineo, James Dean, and Natalie Wood:

Godfrey: Nice guy and mentor to many of my British friends in evolutionary biology: 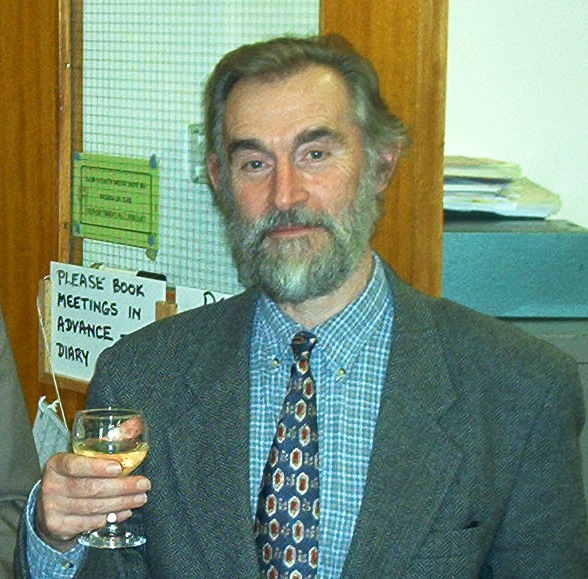 There aren’t many videos of Fagan and Steely Dan performing live, especially in their prime years. They were always a studio band. But here’s a good one, a whole 45-minute concert. Sample it at your leisure. There’s patter as well as some of my favorites from this incomparable group (“Bad Sneakers” is my favorite, though the great guitar solo is missing, with “Kid Charlemagne” coming second.) Click on the links to go the song on YouTube:

Here’s Lovelace, her husband, Larry Marchiano, and their son in 1986. Free at last (until she died after a bad car crash.) 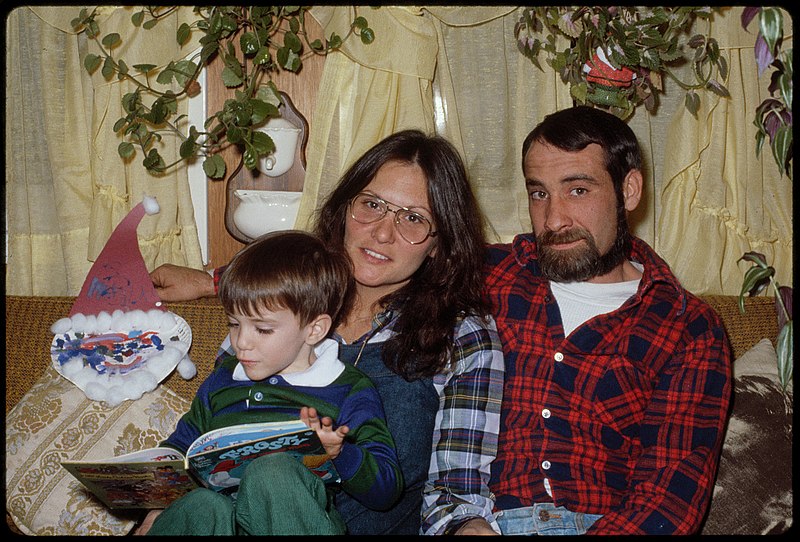 Those who began singing with the Choir Invisible on January 10 include:

Lewis, below, was the first American to win the Nobel Prize for Literature. I’m not a big fan, though this novels are fun reads. 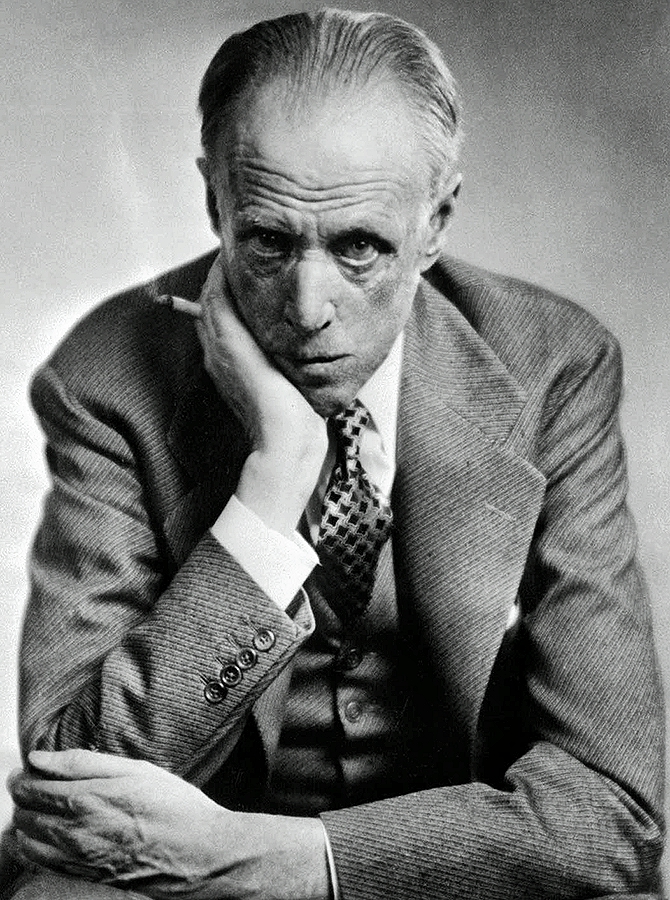 Meanwhile in Dobrzyn, the cynical Hili is chuckling:

A: We have more and more reasons for optimism.
Hili: An excellent joke. 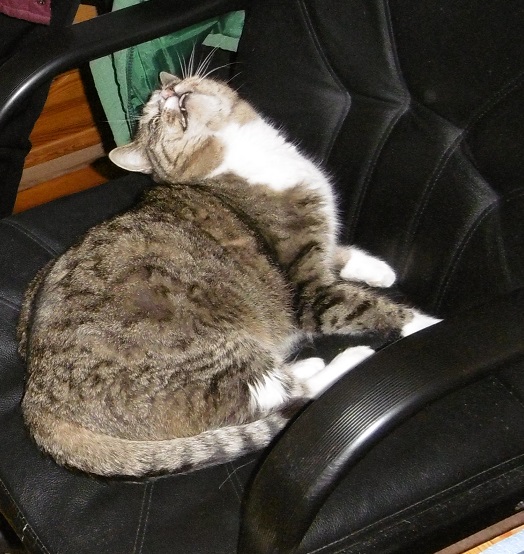 From Malgorzata, a photo of baby Kulka:

And there is a strange picture of Kulka. She put her head behind the blind and Andrzej took the picture. 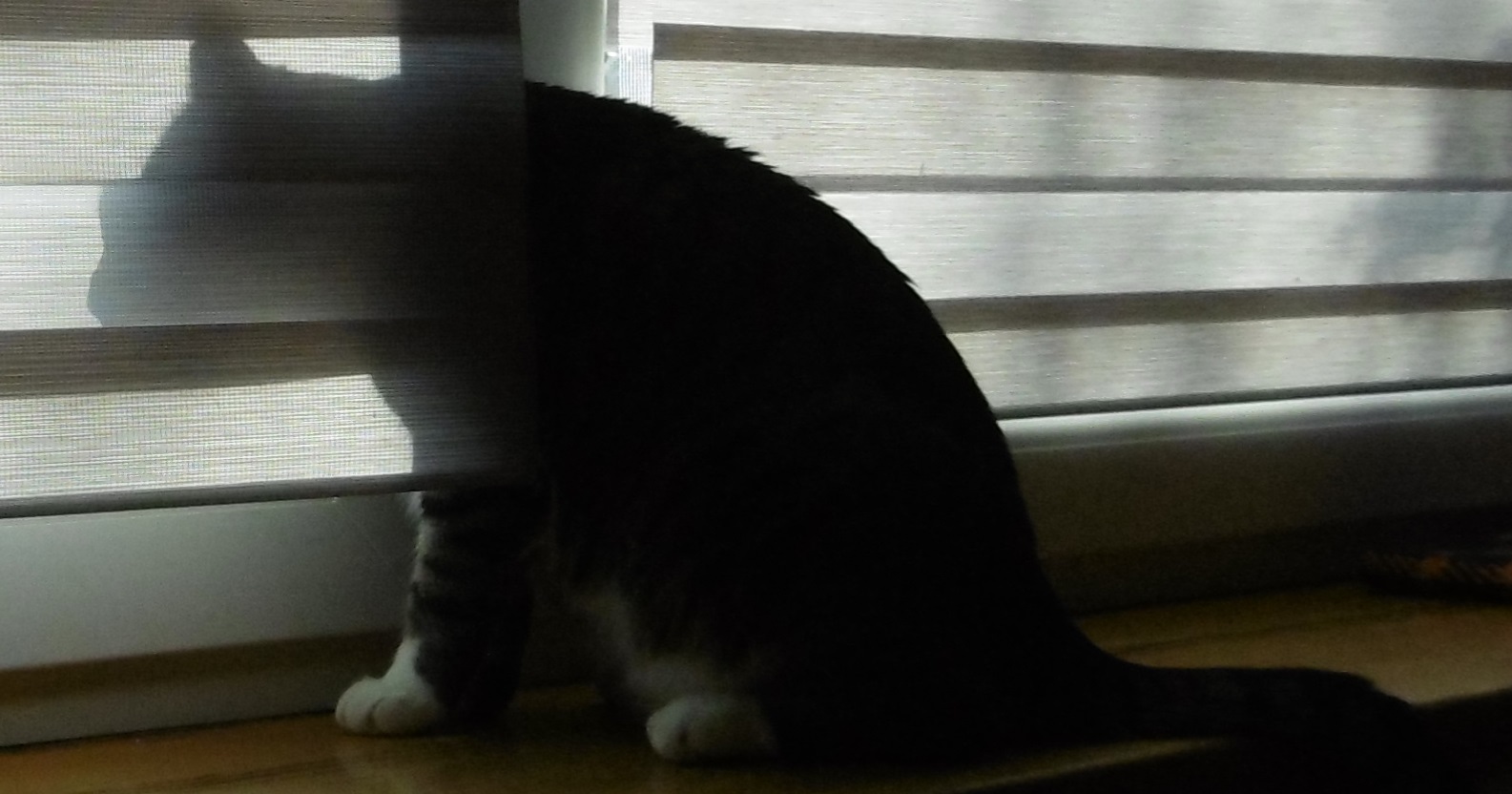 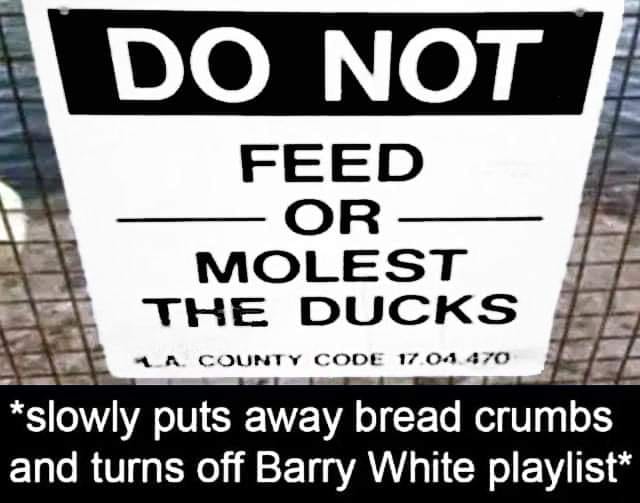 A cartoon from Bruce. The good news is that although such people exist, you won’t have to listen to them for eternity: 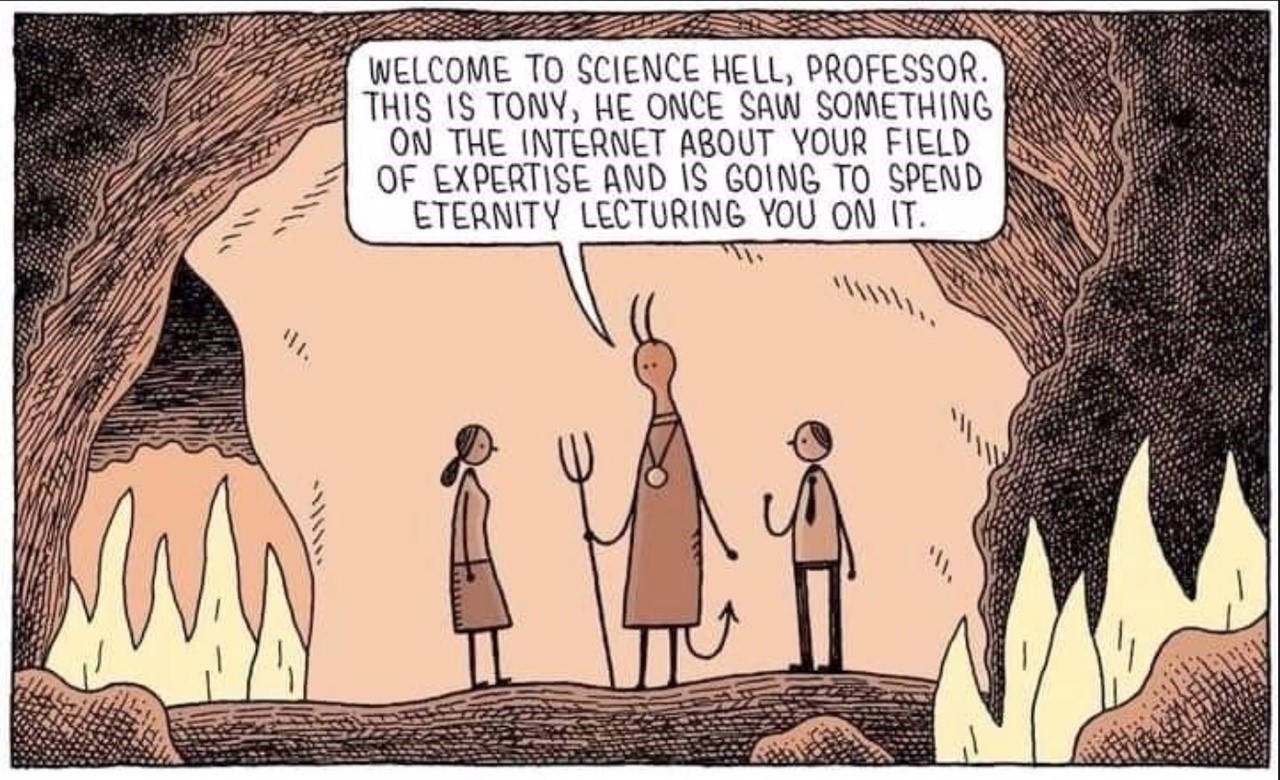 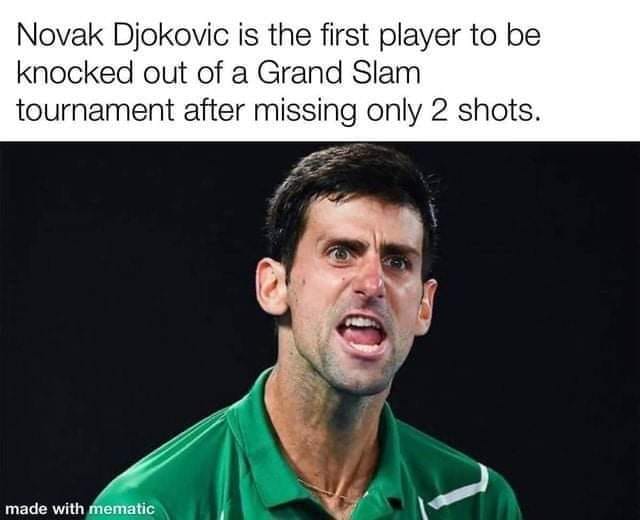 A tweet from Barry. Cats aren’t usually this awkward!

“Just act cool. Nobody even saw it” 😂 pic.twitter.com/KL2laQu5so

From Simon, who added:

Would a cat ever even consider that it had “sinned”? I’m pretty sure catholic guild is not a gift that keeps on giving in felids.

I responded that perhaps the priest was confessing to the cat (priests, after all, use confessors, too):

Where do you see yourself in 5 years? pic.twitter.com/fWvmAvutA3

She was deported to #Auschwitz in October 1942 and murdered in a gas chamber after selection. pic.twitter.com/9E3ktD0xNl

Tweets from Professor Cobb. Look at the triumphant belly slide at the end!

Close call..
And then the slide..

From a vaccination medical researcher. The predictions aren’t happy, but in the fifth of these six tweets he suggests a solution to the pandemic.

2/6 SCENARIO #1. Annual winter peaks. This was put forward by @mlipsitch and his @HarvardChanSPH team early in the pandemic, but I think it still holds up well. Arguably what's happening now is an example. Here's his 2020 paper from SCIENCE https://t.co/No1dkWIh1l

Seriously: these oak leaves are 8000 years old. They were found in the soil sample in Garry’s box from the Solent sea bed and were once part of the Mesolithic ground surface.
Mind boggling!! https://t.co/FmCaCcV1q5 pic.twitter.com/74KUK1hGug