*In a new NYT essay, Jedediah Britton-Purdy, a professor of constitutional law at Columbia, maintains that “The Republican Party is succeeding because we  are not a democracy.” What? It’s all about the Electoral College system, he says:

The arcane scheme that Mr. Trump’s lawyers hatched to disrupt congressional certification of the vote and perhaps persuade Republican state legislatures to overturn Joe Biden’s victory in states like Pennsylvania was conceivable only because the Electoral College splinters presidential elections into separate contests in each of the 50 states and the District of Columbia and skews the totals toward small states. In a simple system of majority rule, Mr. Biden’s thumping margin of more than seven million votes would have been the last word. For that matter, so would Hillary Clinton’s national margin of nearly three million votes in 2016: Mr. Trump would not have had a 1600 Pennsylvania Avenue address in which to barricade himself in 2020.

Would Mr. Trump’s big lie about election fraud have sent the rioters to the Capitol anyway, even without his lawyers and fixers trying to overturn the results? Maybe. But there would have been no constitutional machinery to jam. And even the big lie received a huge constitutional assist. Thanks to the Electoral College, Mr. Trump could have tied Mr. Biden and forced the election into the House of Representatives by flipping just 43,000 votes in three close states, a gap narrow enough that any number of toxic fables can claim to bridge it.

I agree that the Electoral College is anachronistic and we need to go to the one-person one-vote system, but does anybody really think that Trump wouldn’t have hatched another scheme if the Electoral College didn’t exist?  It would have been a more difficult scheme, but his supporters are, I suspect, willing to call “vote fraud” in any election.

UPDATE TO ITEM BELOW: I wrote this before I learned that Holmes was convicted of four of the 11 counts with which she was charged:

*Jurors in the trial of Elizabeth Holmes of Theranos, accused of 11 counts of wire fraud, have reported that they are deadlocked on three counts. The judge, as usual, told them to keep deliberating, and there’s no hint of what’s going on with the other 8 counts. This is not normal:

This is a highly unusual situation, said Stanford Law School professor Robert Weisberg, an expert in criminal law. Typically, when a jury reports that they are deadlocked on some counts, they announce their verdict on the other counts, he said.

But until the jury announces its verdict to the judge, they are not bound to any preliminary vote on the other eight charges and can still change their mind, said Weisberg, who isn’t involved in the case.

After 46 hours of deliberations over nearly seven days, jurors were stuck on three counts, according to a note read by the judge in court Monday morning. The note suggested they may have reached a unanimous verdict on the remaining eight.

. . . Even if the jury remains deadlocked on the three counts, it still can return a unanimous verdict on the other eight. If any of those eight include a guilty verdict, Ms. Holmes would face a possible prison sentence, determined by the judge. Each fraud charge carries a maximum sentence of 20 years in prison plus fines and restitution.

While I predicted some guilty verdicts here, I now have no idea what’s happening. All I know is that if she walks, an injustice will have been done.

*The New York State investigation into Donald Trump’s finances proceeds apace, and is getting closer to The Donald. The AP reports that in fact Trump himself has been subpoenaed along with his two oldest kids, Ivanka and Donald, Jr. If any of these wind up being convicted, they can’t be pardoned by any President, because they’re investigating violations of state and not federal law. Trump may think he’s above the law and refuse to appear in court, but then he could be sent to the slammer depending on what they find and what to do about it.

[Attorney General Letitia] James, a Democrat, has spent more than two years looking at whether the Trump Organization misled banks or tax officials about the value of assets — inflating them to gain favorable loan terms or minimizing them to reap tax savings.

The Trumps have indicated they will fight the subpoenas and are expected to file court papers through their lawyers seeking to have them thrown out. A similar legal fight played out last year after James’ office subpoenaed the testimony of another Trump son, Eric Trump.

Trump sued James in federal court last month, seeking to put an end to her investigation. Trump, in the lawsuit, claimed that James had violated his constitutional rights in a “thinly-veiled effort to publicly malign Trump and his associates.”

A state court judge who handled that dispute agreed Monday to entertain arguments over the recent subpoenas.

I don’t often beef when courts follow the law, but a little voice inside of me whispers, “Lock him up!”

Stuff that happened on January 4 (a rather dull day in history) includes:

Here’s an 1841 bill of sale of Northup and two others to a slaveholder—after he was kidnapped.  “Platt” is Northup 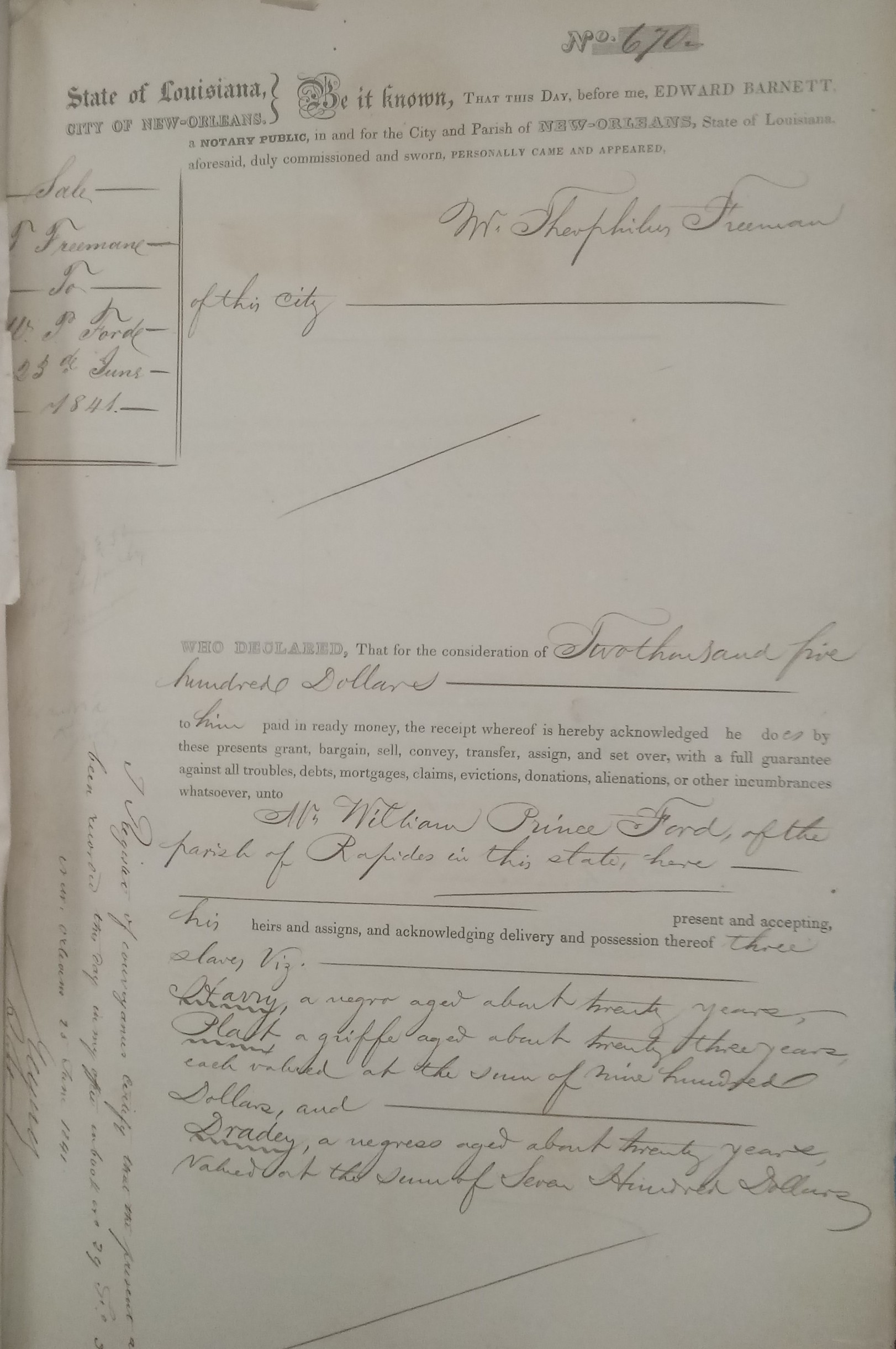 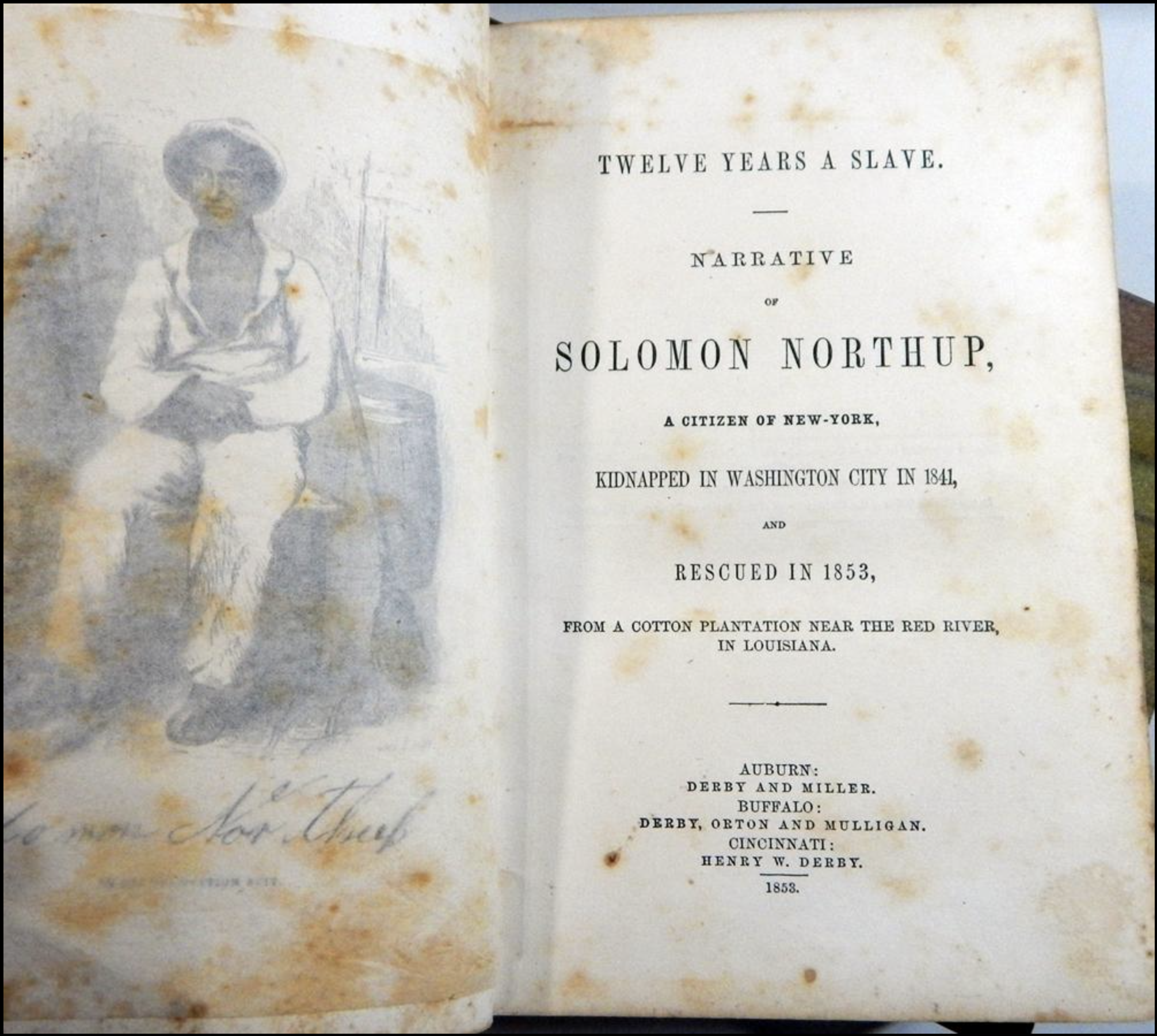 They killed Topsy because they had trouble controlling her. The video is one of the cruelest and most horrific things I’ve ever seen one to an animal. I won’t post it, but if you want to watch it, you can see it here.

Ussher is most famous to us for calculating the date of creation by counting back using the Bible, and for years his calculations were considered accurate, and of course supportive of young-earth creationism. As Wikipedia notes:

Ussher now concentrated on his research and writing and returned to the study of chronology and the church fathers. After a 1647 work on the origin of the Creeds, Ussher published a treatise on the calendar in 1648. This was a warm-up for his most famous work, the Annales veteris testamenti, a prima mundi origine deducti (“Annals of the Old Testament, deduced from the first origins of the world”), which appeared in 1650, and its continuation, Annalium pars posterior, published in 1654. In this work, he calculated the date of the Creation to have been nightfall on 22 October 4004 BC.

Ironically, Ussher served as The Primate of All England.

Weirdly, Wikpedia gives his birth date not as January 4, but as December 25, 1642 (was it a calendar change). Neil DeGrasse Tyson uses his Christmas birth as an introduction to a talk when people think he’s talking about Jesus.

Braille himself was totally blind after an accident with an awl as a child. But the system he invented then is virtually unchanged today. I am curious about how languages without the Latin-style alphabet that most Western countries use. There surely must be a Braille system in Arabic, Malayalam (a palindrome, too!), and other such languages.

His real name was Charles Stratton, and as a “liitle person” (formerly midget), he was a big attraction at P. T. Barnum’s shows, for he could also sing, dance, and do impressions. Here’s his wedding to Lavinia Warren in 1863. Caption from Wikipedia:

This is the real Bond—James Bond. Ian Fleming knew of his work (e.g.,  Birds of the Caribbean) because Fleming himself lived in Jamaica and was an avid birdwatcher. The real Bond thought that Fleming using his name for the fictional secret agent was a good bit of fun. 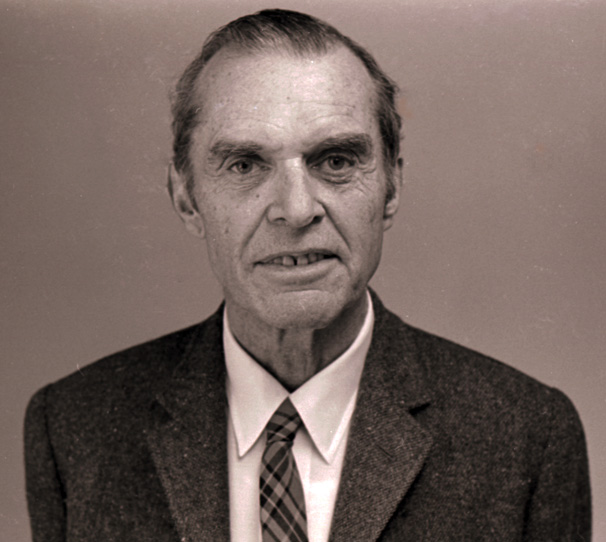 Whatever happened to Stipe and REM?

Those who were no more on January 4  include:

Here’s the grave of Schrödinger and his wife in Austria. Notice the equation at the top; do you recognize it? 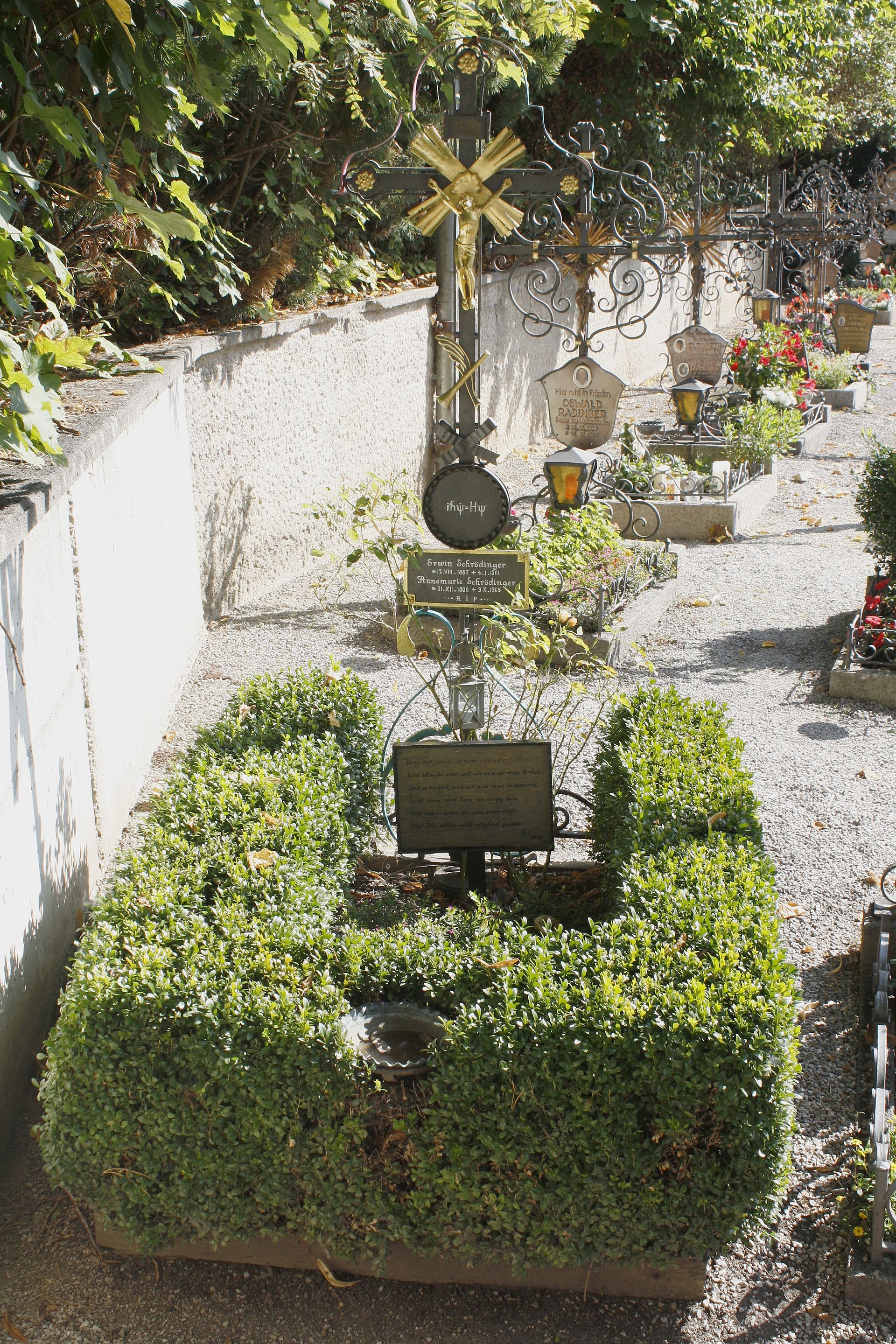 Here’s Eliot (who was born in America) reading what I consider his best poem, “The Love Song of J. Alfred Prufrock“. Like Dylan Thomas, he reads in a monotone. It’s amazing that he wrote this poem when he was 22 years old.

Meanwhile in Dobrzyn, Hili and Andrzej have a deep conversation:

Hili: From a safe place the world looks less threatening.
A: It depends on what you avert your eyes from. 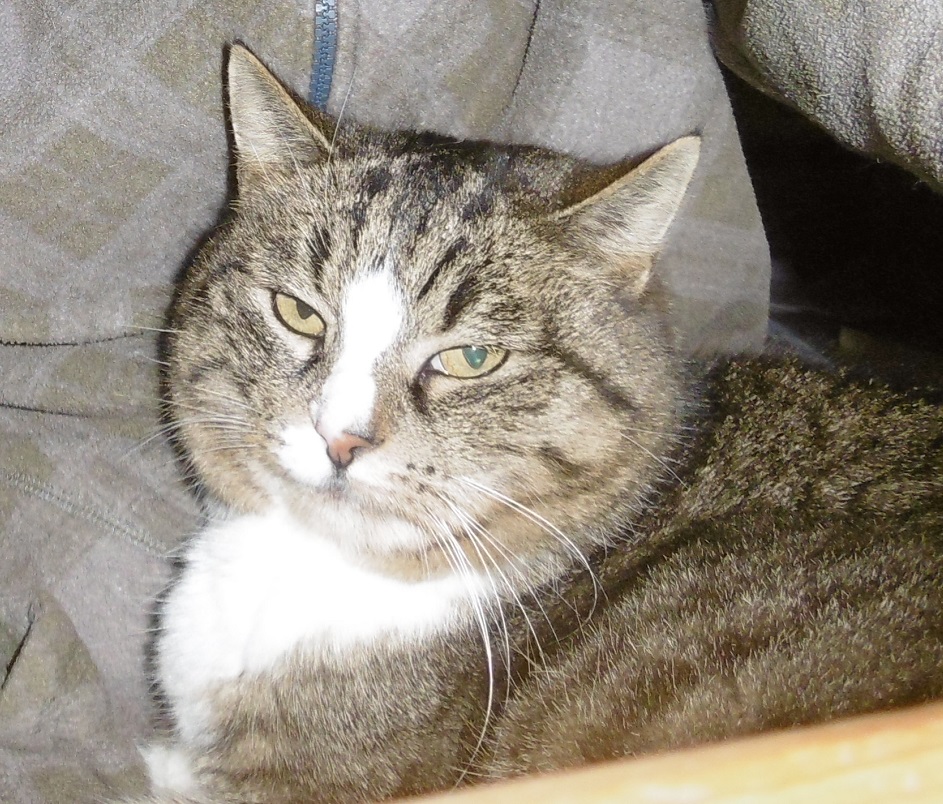 And Kulka on the kitchen table: 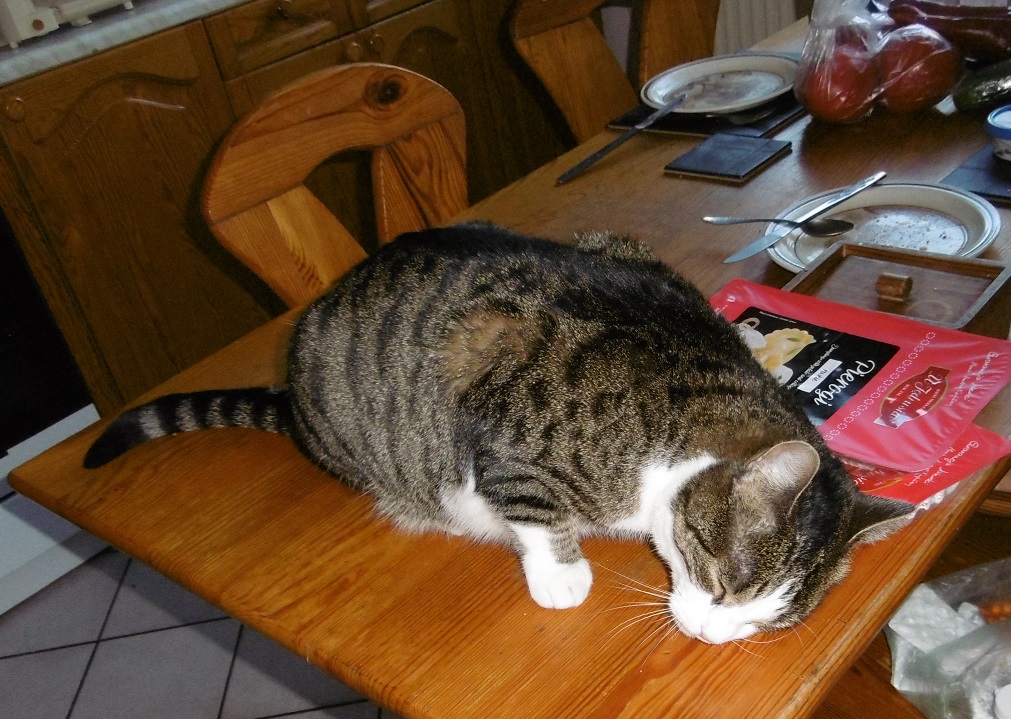 From Twitter. Now they want to stiff the old people because the younger ones don’t want crap wages: 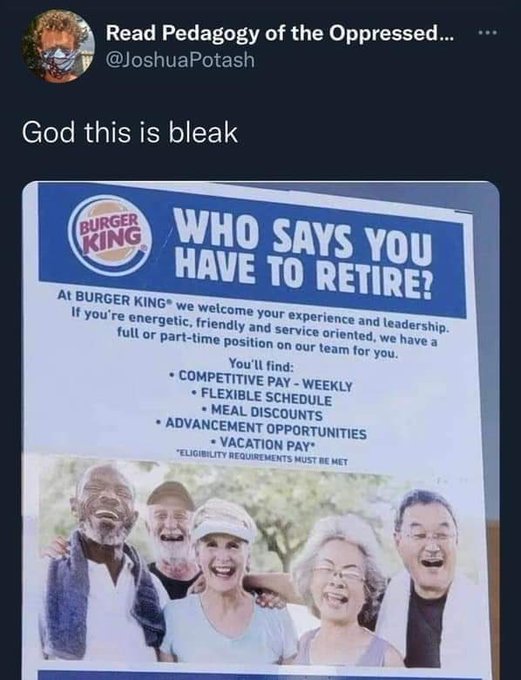 A New Year meme from Bruce: 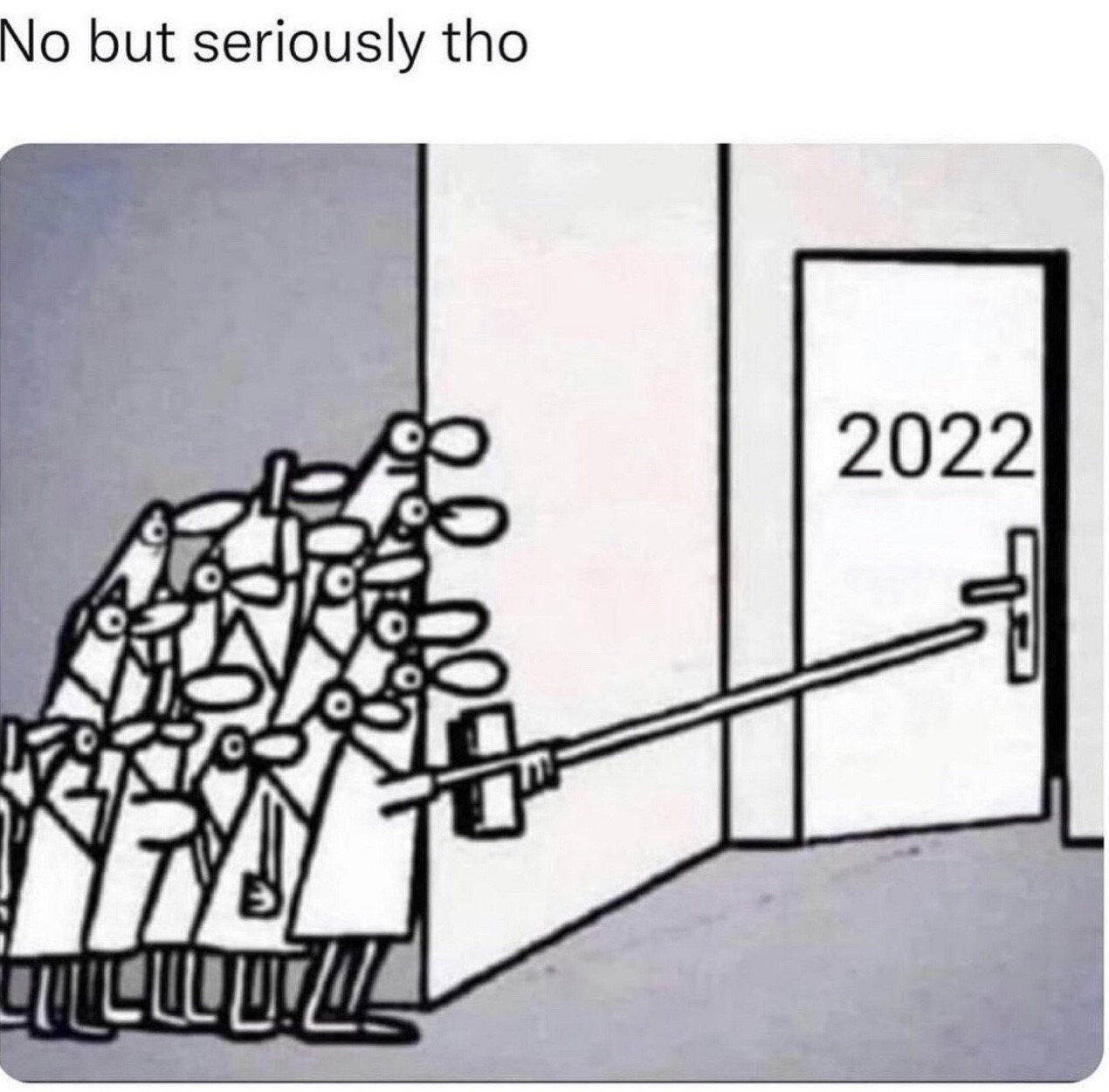 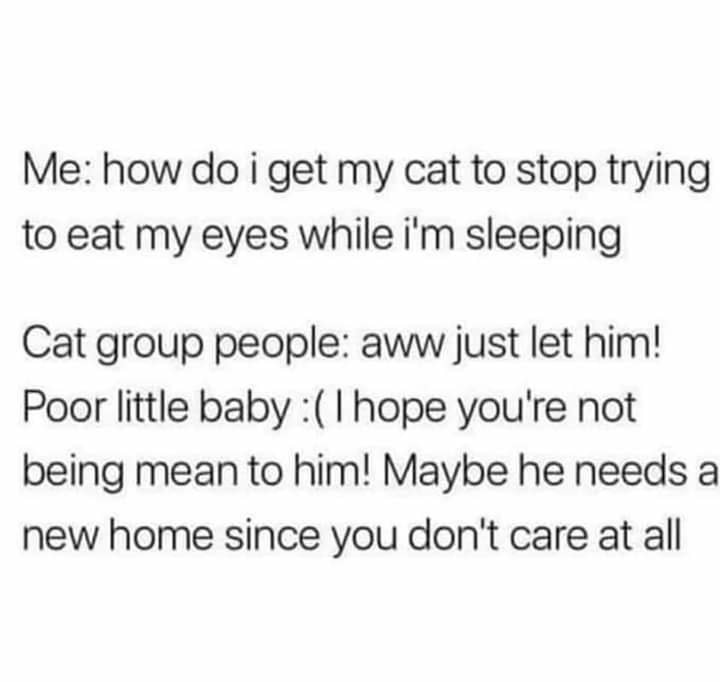 Sabine learns the difference between American English and British English. It’s a long video, as it’s one of her regular ones:

This video is the result of one year of work, as a side-effect of which I've learned the differences between American and British English. Can you name them? Many thanks for @DrBrianKeating for the speech samples!https://t.co/Zow3s3YdYQ

From Laura Helmuth, editor of Scientific American. I think she’s conflating the “gender binary” with the “sex binary”, which is to all intents and purposes, is binary.

Dial For Men reporting for duty to protect and defend the gender binary pic.twitter.com/5XfLbQJnsO

From Simon: The Invasion of the Nose Eaters:

From Ginger K.; what can one say?

“Well at least things won’t get weird this Christmas.”

Tweets from Matthew. Yes, there is a cat in this photo. Can you spot it? The reveal is below the fold:

I love this video. The gerenuk male is so considerate, and both gazelles are ineffably graceful. Of course, Matthew and I wondered if the female’s noms are just a side effect of the male trying to get food, and he’s not a gentleman at all:

A Gerenuk couple out on a date..

The female picks out the branch she likes and the male bends it to let female feed.. 😊 pic.twitter.com/rWKkbtUihI

I would kill to try a ’61 Petrus, perhaps the greatest first-growth Bordeaux from a very great vintage. I’m not sure how this method works as I couldn’t see what the guy without the tongs is doing, but I’m sure an astute reader could tell me.

In lieu of a year in review, here’s 12 months of Foods My Cat Thought Were For Her, But Weren’t:

How could you miss this moggy? (Circled) 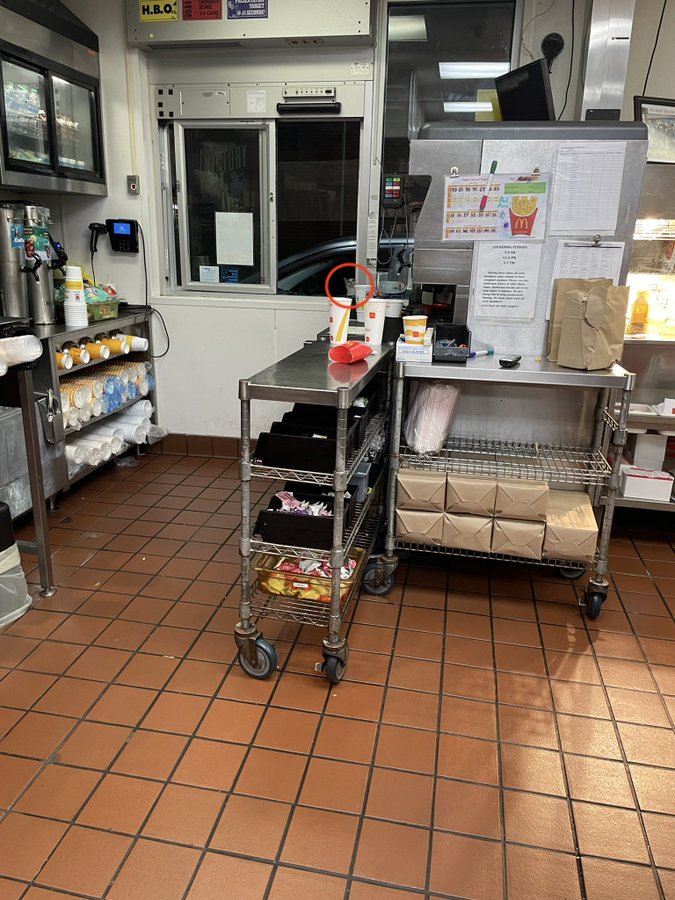