A friend of mine who’s followed the New York Times‘s 1619 Project sent me a link to an article that you can access by clicking on the screenshot below. It’s in the Catalyst Journal, and my friend adds “don’t confuse it with Catalyst Magazine, which is pure woo!!” First, though, be aware that Catalyst seems to be largely socialist and anti-capitalist, but you shouldn’t dismiss anything they say simply because of that. Here’s its mission as stated on its website:

Discussion of capitalism is not off the table any longer. Catalyst: A Journal of Theory and Strategy launches with the aim of doing everything it can to promote and deepen this conversation. Our focus is, as our title suggests, to develop a theory and strategy with capitalism as its target — both in the North and in the Global South. It is an ambitious agenda, but this is a time for thinking big.

Catalyst is a peer-reviewed journal sustained by the support of over 7,500 individual subscribers and our institutional readers.

This explains the remarks on capitalism included at the end of this critique by historian James Oakes. (Note: it’s long: 47 pages as I’ve printed it out, but if you’re interested in the 1619 Project, its implications, its benefits, or its dangers, you should read it.). Click on the screenshot or go here; both afford free access. 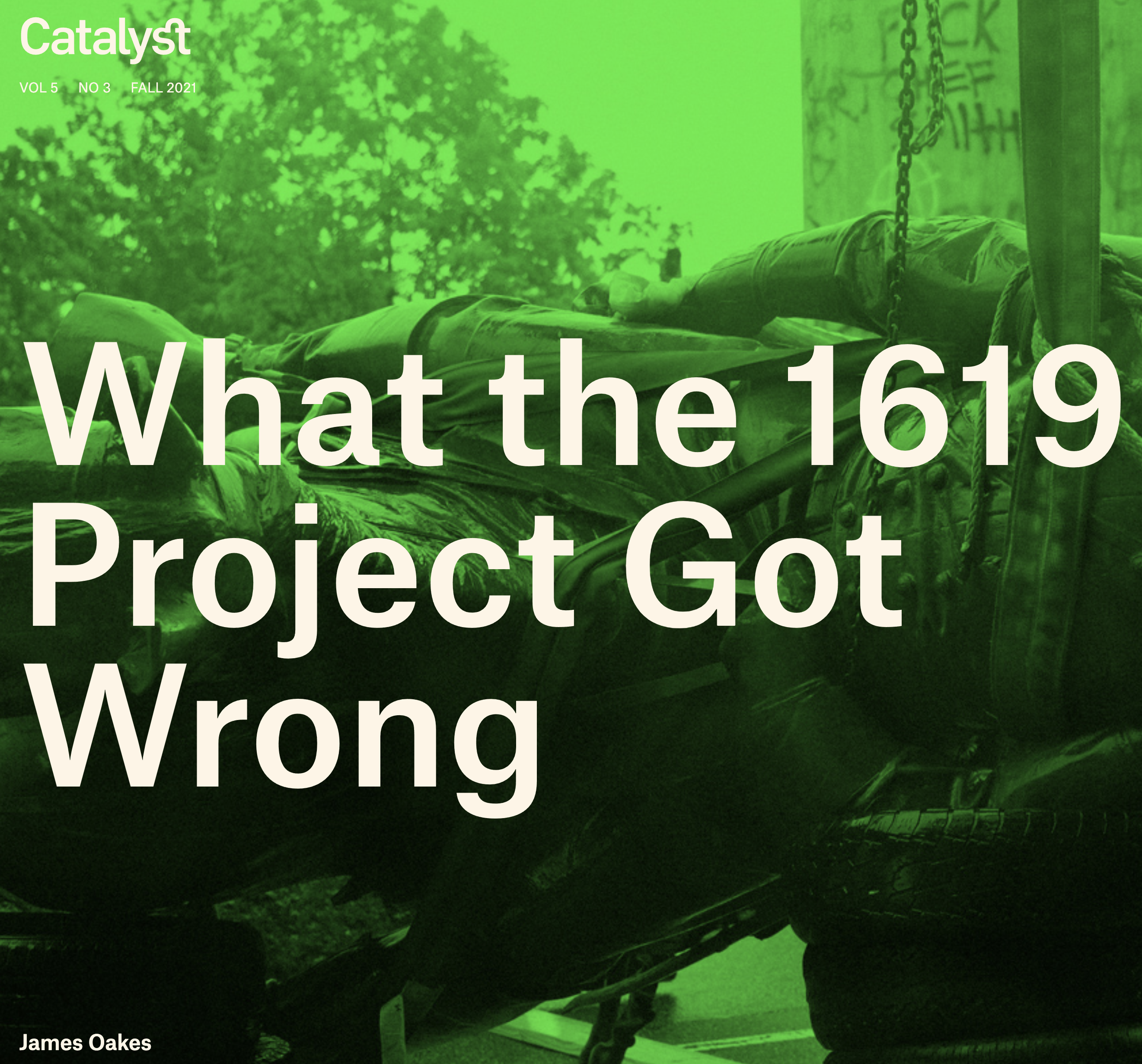 And if you’re worried about Oakes’s credibility, below are his credentials from Bookreporter. You can also go to his Wikipedia bio, where you can see his impressive list of books relevant to the issues of slavery and race. One simply can’t dismiss his critique on the grounds of his credentials!

My friend’s take on Oakes’s piece was sufficiently eloquent and thoughtful that I asked him/her—not a pronoun but a disguise!—if I could use it to introduce the article, and he/she agreed. It’s between the two lines below. At the bottom I give a few quotes from Oakes’s piece:

The beating heart of wokeness is racial guilt––sincerely felt by remorseful white liberals, but amplified by BLM advocates seeking to convince the liberals that they and all of their ancestors have always been “supremacists” and nothing else. Although repentance and reparations are called for, the demand is made without an expectation that the original sin will thereby be purged. Whiteness itself is construed as an indelible sign of racism.

The New York Times is impressive and invaluable in many ways, but it has become desperately trendy in others. With its recent 1619 Project, the paper has lent its well-deserved prestige to the woke worldview. The Project amounts to a recasting of American history that turns racial domination into an all-explanatory factor––the only significant motive in “the white mind” from the seventeenth century until today. The result is a moralizing simplification of the key issues in our national development.

As the following essay by James Oakes––Distinguished Professor of History and Graduate School Humanities Professor at the Graduate Center, CUNY––reveals, one of those distortions has to do with the work of historians themselves. According toThe 1619 Project, all preceding experts have whitewashed the record. They have minimized the importance of 1619, when the first British slave ship landed in the Colonies, while jingoistically celebrating 1776 instead. And they have misinterpreted the Revolution itself, Abolitionism, the Civil War, and the economic development of the country, which, it is said, was powered above all by slave labor.

As the author of such books as The Scorpion’s Sting: Antislavery and the Coming of the Civil War, James Oakes is well situated to assess those claims. You will see that he shows them to be libels of nuanced studies by major American historians––liberals, one and all. And you’ll be left to wonder whether the New York Times, always so insistent on fidelity to facts, will now apologize to its readers and cease recommending its deeply flawed Project to schools and colleges across the country. (Don’t wait up for it.)

JAC: Here are a few quotes from Oakes’s piece:

If the 1619 Project was not actually introducing Americans to an aspect of their history they were never taught in school, why the controversy? If all the Times was doing was restating what we already knew, why the complaints? What was it about the way the Times presented that history that caused so much strife? There were the egregious factual errors, of course, but it’s more than that. It’s the ideological and political framework of the project that led its editors to those inaccuracies and distortions. The 1619 Project is, to begin with, written from a black nationalist perspective that systemically erases all evidence that white Americans were ever important allies of the black freedom struggle. Second, it is written with an eye toward justifying reparations, leading to the dubious proposition that all white people are and have always been the beneficiaries of slavery and racism. This second proposition is based in turn on a third, that slavery “fueled” America’s exceptional economic development.

. . . If nearly everything was caused by racism and slavery, it must follow, as night follows day, that the defense of slavery had to be one of the “primary” reasons for the American Revolution. This absurd, insupportable claim is derived from a syllogism rather than source material. The jury is not out on the question, because juries deliberate over evidence. When confronted by the absence of evidence, the Times changed to wording that read that protecting slavery was the primary reason “some” Americans rebelled. That may be true, but there’s more evidence that “some” Americans rebelled so they could begin to undermine slavery. Either way, the effect of that rewording is to destroy the intellectual architecture of the entire project, for if — whatever the individual motives of “some” people — the revolution itself was not driven primarily by the defense of slavery and racism, it follows that slavery and racism cannot explain one of the most important events — if not the most important event — in US history.

. . .The political goal animating the 1619 Project is reparations. “If you read the whole project,” Nikole Hannah-Jones has said, “I don’t think you can come away from it without understanding the project is an argument for reparations. You can’t read it and not understand that something is owed.”But if the case for reparations rests on distorted history, it can’t be a good case. On the subject of slavery, the distortions of the 1619 Project are numerous, and they are significant. It conflates the wealth of the slaveholders with the wealth of the United States. It asserts without evidence that slavery “fueled” the growth of the Northern economy. It betrays a stunning lack of familiarity with the basic facts of cotton cultivation. It stresses the expansion of the cotton economy but ignores the South’s relative decline in the national economy. Slavery consigned generations of Southerners, black and white, to poverty and economic backwardness. Its legacy is hardship and misery, not widespread wealth.

Most of what the 1619 Project has to say about Southern slavery is contained in an essay by sociologist Matthew Desmond that grossly distorts the history of the slave economy and is riddled with factual errors. . . .

Read the rest for yourself; it’s the most powerful takedown of the 1619 Project I’ve seen, and I thank my friend for calling it to my attention.

26 thoughts on “Guest post: A scholarly critique of the 1619 Project finds many omissions and distortions”