I want to begin by saying that the article we’ll discuss appeared in Quillette, and some have started dismissing everything published on that site as right-wing nonsense.  That’s a bad attitude. While I disagree with some of the things I read there, I agree with others, and that’s what should be the case for a site devoted to presenting “controversial” opinions. Lots of good people have published there, and it’s your loss if you ignore it. Plus, by spurning everything on the site, you’re committing the “genetic fallacy”, defined in Wikipedia and explained by Steve Pinker in his new book Rationality.  From Wikipedia:

The genetic fallacy (also known as the fallacy of origins or fallacy of virtue) is a fallacy of irrelevance that is based solely on someone’s or something’s history, origin, or source rather than its current meaning or context. This overlooks any difference to be found in the present situation, typically transferring the positive or negative esteem from the earlier context. In other words, a claim is ignored in favor of attacking or championing its source.

Now, on to the article and the topic: does suppressing testosterone after puberty in men who transition to the gender of “woman” (i.e., transwomen) make them qualified to compete with biological females in women’s sports? I’ve discussed this several times, but this new article discusses two review articles that look at more data. In particular, the data involve not only the differences in traits and performances between “cis” men and women, but also whether testosterone suppression according to Olympic rules (a titer of 10 nanomoles/liter of blood for 12 months before competition) sufficiently reduces the physical advantage of transwomen so that they are able to compete fairly in sports against biological women.

The answer to the last question seems to be, no, it doesn’t. Male sports advantage, involving traits acquired beginning at puberty, is not appreciably diminished after even three years of testosterone suppression.  This raises problems for those who argue that transwomen should certainly be allowed to compete against biological women. Many people and organizations, most notably the American Civil Liberties Union (ACLU), take the position that there need be no medical or surgical intervention in men who identify as women to allow them to compete against biological women.And that is a risible position, and one palpably unfair to biological women. Now we see that the position of the IOC, which involves maintaining a 10nm testosterone level or below for a year to compete, does not “level the playing field.” (The IOC has rescinded this standard.)

[UPDATE: I had forgotten that the Biden administration seems to be taking the same position as the ACLU, as a commenter notes below, and that would be disastrous for women’s sports.]

Click on the screenshot to read. and note at the bottom a source: “This article has been adapted from the recently published Macdonald-Laurier Institute report, Fair Game: Biology, Fairness, and Transgender Athletes in Women’s Sport.” The full 44-page report is here.

The authors are identified this way:

Jon Pike formerly chaired the British Philosophy of Sport Association. Emma Hilton is a biologist at the University of Manchester. Leslie A. Howe is a University of Saskatchewan philosophy professor.

In line with the biology of sexual reproduction and evolutionary pressure on reproductive fitness, males and females are physically different. Physical divergence begins with primary sex development at around seven weeks in utero when, triggered by genetic information inherited at fertilization, bipotential gonads differentiate as either testes in males or ovaries in females. The differentiation and development of gonad type generates a sex-specific hormonal profile that drives ongoing development associated with sex class. Testes contain cells that produce the hormone testosterone, and it is testosterone and its derivatives that mediate the development of male internal and external genitalia, the establishment of growth parameters during high-testosterone “minipuberty” in the neonatal period, and the development of secondary sex characteristics at puberty.

In females, the absence of testosterone production from the developing ovaries permits female internal and external genital development, and the activation of estrogen pathways promotes the development of secondary sex characteristics at puberty.

The secondary sex characteristics acquired during puberty in preparation for reproduction lead to measurably different body morphs between males and females (“sexual dimorphism”) across many physical parameters. Broadly, when compared with females, males are taller and have longer bones with narrower hips and wider shoulders; have lower body fat and higher muscle mass differentially distributed across sites, with more resistant connective tissue; have larger hearts and lungs, and higher levels of haemoglobin, the protein that carries oxygen within the blood.

Here’s a figure from the article showing the physical, functional, and performance differences between un-transitioned (“cis”) men and women. The percentages reflect male “advantage”, i.e.(male- female)/female] X 100.  As you see, for most traits except body fat and pelvic width, men have “more” of the trait than do women.  For the nine performance-related traits, men have more of all of them. The same holds for 12 performance differences. References are given at the bottom of the table. 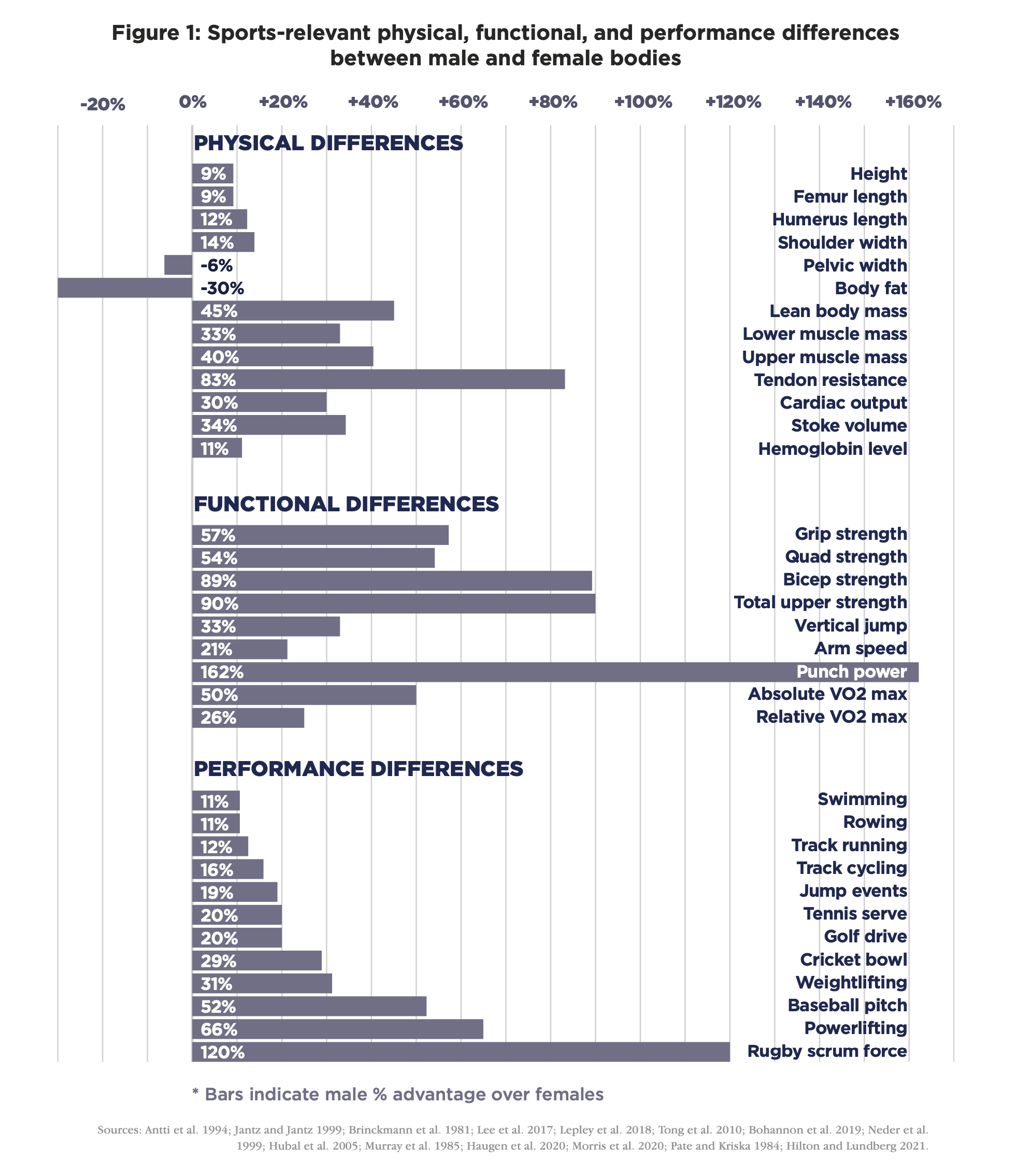 This isn’t really new—it’s the very reason why sports participation is almost invariably segregated by sex. It wouldn’t be fair to have biological women running track, weightlifting, or playing tennis against biological men.

The question at hand is this: if biological men who identify as women suppress their testosterone levels, can they compete fairly against biological women? By “fairly”, I mean “lose all the physical advantages they have acquired as biological men who have passed through puberty”? The answer, as I said, is “no.”  Here’s the author’s summary, buttressed by another graph below:

There are athletic differences, probably underpinned by genetic differences and exposure to testosterone during minipuberty that are evident between male and female children at school age. However, school sports tend to promote team play, skill acquisition, and social development, and are therefore usually mixed sex (although promising children may be streamed to dedicated extracurricular sports that are divided by sex).

Notwithstanding these childhood differences, the majority of male athletic advantage appears to be acquired at puberty, when males experience a surge of testes-derived testosterone that results, in adulthood, in circulating testosterone ranging from 8.8–30.9 nanomoles per litre (nmol/l), while female testosterone remains low, ranging from 0.4–2.0 nmol/l. Thus, from puberty into adulthood, testosterone levels between males and females form a non-overlapping, bimodal distribution.

And here’s the discussion of the review papers, one in the British Journal of Sports Medicine and the other in the Springer journal Sports Medicine. You can access both for free.

There have been two high-quality, high-impact academic reviews, both in leading sports journals, of muscle and skeletal physiology in transwomen who have, post-puberty, suppressed testosterone as part of their transition. The reviews cover longitudinal studies; that is, they contain pre-transition metrics such as thigh muscle area and grip strength, and matched data from at least 12 months, occasionally longer, into transition. All transwomen studied had been successfully suppressing testosterone to less than 10 nmol/l for at least one year, and would therefore qualify for inclusion in female sports categories under the regulations specified by the IOC and most sports federations. Collectively, the studies captured by these reviews cover over 800 transwomen in 10 original studies, with data acquired as a routine aspect of ongoing general health assessments within clinical care teams.

To summarize: In transwomen successfully suppressing testosterone for 12 months, skeletal metrics—height, limb/digit length, and shoulder/pelvic width—do not change, and the extent of muscle/strength loss is approximately -5 percent after 12 months, a modest change that is insufficient to bridge the baseline muscular differences between males and females.

Regarding musculoskeletal parameters, Hilton and Lundberg concluded: “The biological advantage, most notably in terms of muscle mass and strength, conferred by male puberty and thus enjoyed by most transgender women is only minimally reduced when testosterone is suppressed as per current sporting guidelines for transgender athletes.”

This conclusion was subsequently confirmed by Joanna Harper and her fellow researchers, who added: “Hormone therapy decreases strength, lean body mass and muscle area, yet values remain above [those] observed in cisgender women, even after 36 months.”

The figure below, with references, shows measurements of biological women (F) compared to transwomen (TW) of similar height and weight before and after they transitioned, suppressing testosterone according to IOC standards for at least 12 months. The left side of the figure shows the percentage loss of various traits in transwomen due to hormone suppression, and on the right the retained percentage advantage of the hormone-suppressed transwomen over biological women/ Advantages include phusical traits and performance.

As you see, the percentage losses in transwomen, except for the 12% in thigh muscle area, is negligible using the Olympic standards (note that a few traits, like thigh muscle areaLean body mass, and limb lean mass, they monitored after 2-3 years), and in every case measured, the transwomen retain a large percentage advantage over biological women, ranging from 13% to 41%.  These numbers should be zero if the Olympic standard really did level the playing field.(I presume that the absence of a bar means “no data”.) 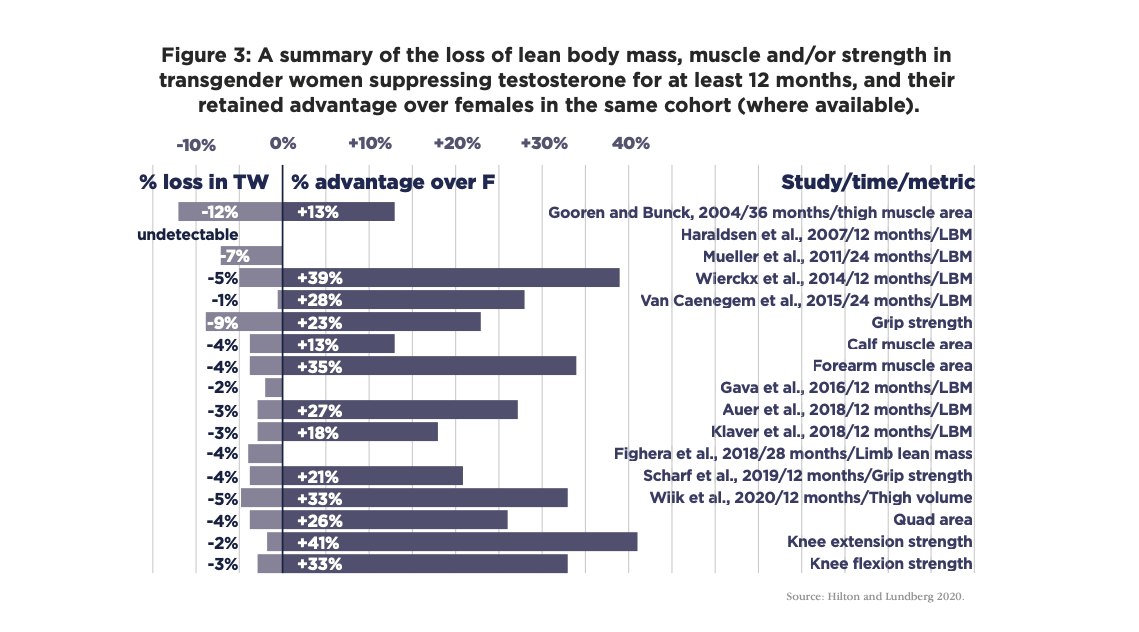 Thus, the most recent analyses generate a consensus that testosterone suppression in transwomen who meet the central IOC criteria adopted by most sporting federations induces only small amounts of muscle/strength loss, and does not remove the male athletic advantage acquired under high-testosterone conditions at puberty. Male musculoskeletal advantage is retained, and this raises obvious concerns about fairness and safety within female categories when transwomen are included.

In the face of this evidence, the IOC has publicly made it clear that the guidance it offered in 2015 is “not fit for purpose.” Rather than tightening the policy, though, the IOC has passed the task on to international federations and governing bodies.

Now these cases involve people born unambiguously male or female. The authors also discuss people who are sexually ambiguous (0.02% of the population) and those with differences of sexual development (DSD). The short take is that it’s complicated, and raises yet other questions.

In the main, though, given that there are many studies involved here, the conclusion for the time being must be that IOC-standard hormone suppression does not completely eliminate in transwomen the biological traits of males that give them an advantage in sports—even after three years of treatment. In light of this, the International Olympic Committee has rescinded its standards and, as far as I know, hasn’t issued new ones. But the IOC’s standards clearly aren’t sufficient to “nullify the physical advantages of transwomen who were all born male and have experienced male puberty.”

What to do, then, to ensure fairness? The only solutions I see for now are two I’ve mentioned before: either creating an “other” category, or allowing transwomen to compete only against biological men. To maintain that “transwomen are women” for purposes of athletic competition, as the ACLU and some trans activists do, is simply unwarranted. It’s unfair to biological women, who have largely been self-censoring their complaints because they’d be called “transphobic.”

65 thoughts on “Does suppression of testosterone reduce the athletic advantage of transwomen over biological women?”