This piece by Fredie deBoer on his eponymous Substack column is free, but do subscribe if you read him often. It’s an analysis of the failure of the Left to unify themselves in a way that can appeal to middle American and defeat the Republicans—things I’m on about all the time. It also answers a question I get all the time: “Why are you always bashing the Left and leaving the Right alone when the Right is clearly more dangerous to America?” Well, I don’t really neglect the Right, and I do agree about the relative dangers. But I do concentrate on the Left, and deBoer explains why better than I can.  And he pulls no punches. 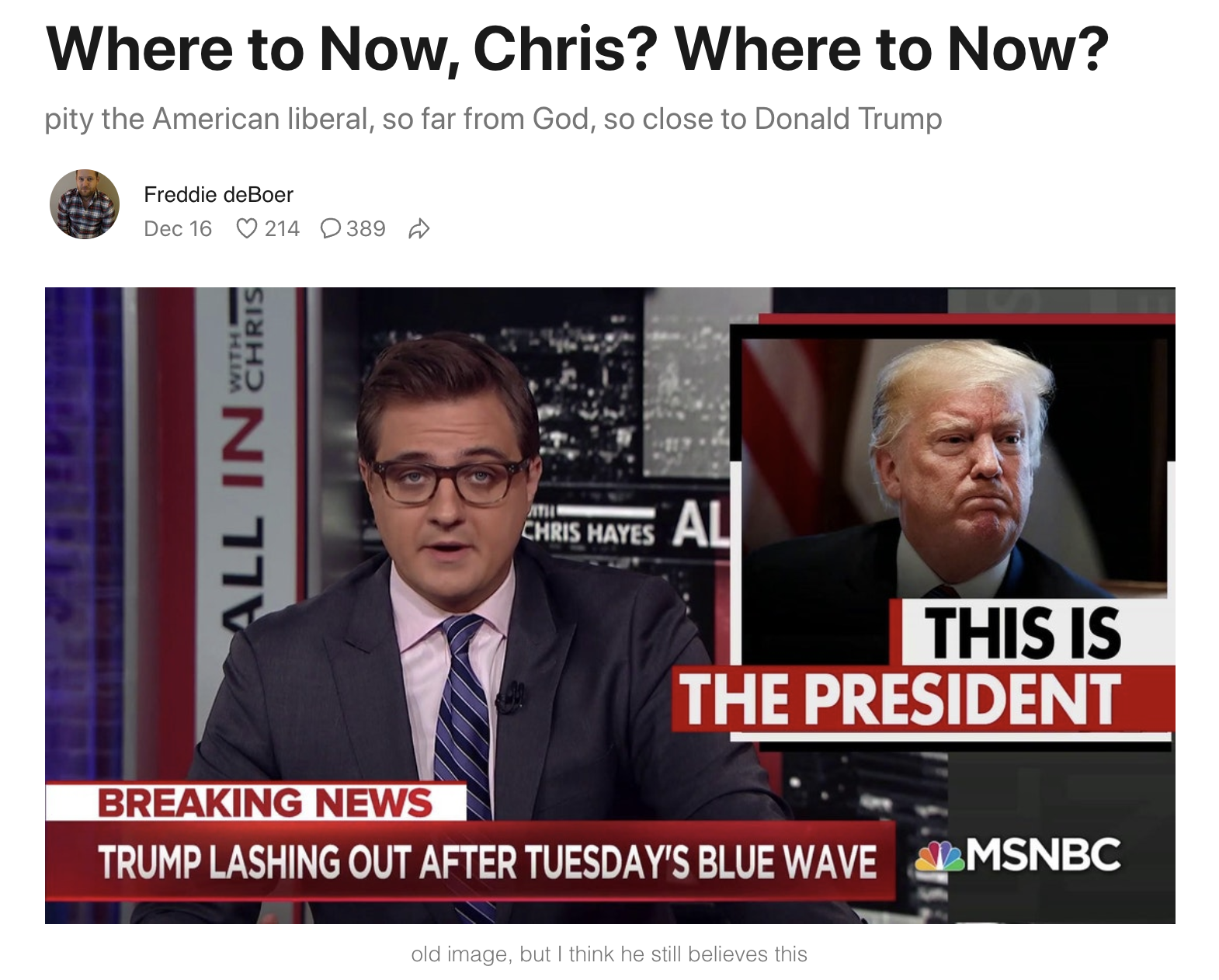 The part I don’t wish I’d written, because I think it detracts from deBoer’s message, is that he writes a LOT about Chris Hayes—a political commentator on MSNBC—using Hayes as an exemplar of what’s gone wrong with the Left. In particular, after Trump was elected, says deBoer, Hayes got woke. This is just a short bit reflecting deBoer’s disappointment with Hayes (even though he says he admires him):

When I think of this refusal to practice introspection, I think of MSNBC host Chris Hayes. I see two great impediments to the American liberal project, and Hayes embodies both: a fixation on Trump that nears the pathological, trapping liberalism perpetually in yesterday’s war, and a studious refusal to speak plainly and critically about the way that the Democratic party has become captured by donors and staffers whose politics are not just wildly out of step with the median American but with the median Democrat. Whether for ratings or to satisfy the contemporary lie that Trump is the worst president ever – you can read Hayes’s own writing from the Bush era to understand why it’s a lie – Hayes cannot quit Donald Trump, and thus like his party cannot settle on a remotely coherent political vision. He’s trapped.

And that’s all I’ll say about Hayes, though deBoer has a lot more to say about him. I don’t think it’s wise to use Hayes as a whipping boy for Woke Democrats, simply because it detracts from deBoer’s message. Plus I don’t know squat about Chris Hayes!

I’m just going to give two long quotes by deBoer because he expresses some of my own sentiments more strongly and with more sarcasm than I could. The bold questions are mine that I think deBoer answers (indented bits):

First, why does he (and your host) concentrate on the perfidies of the Extreme Left rather than the Dangerous Right? deBoer:

Sometimes I get people asking me why I don’t write more criticism of Republicans and conservatives. I’ve made the basic point many times before: those with influence within the conservative movement are too craven or crazy for meaningful written engagement to be worth anything, and those who are interesting and honest have no influence within the conservative movement. You can engage with Ross Douthat, who’s sharp and fair but who the average conservative would call a RINO [JAC: “Republican in name only”], or you can engage with a roster of interchangeable lunatics who lie and dissemble in defense of a cruel revanchist movement. I tend to train my fire on the broad left of center because, as much as I would sometimes like to wash my hands of the whole damn lot of them, they are the half of American politics that could actually reform, that could improve. I see no positive outcome from going through Breitbart posts and pointing out the lies. But Hayes, and other liberal Democrats who grumble and groan about left on liberal criticism, seem to think that if we just keep talking about how awful Josh Hawley and the Proud Boys are, somehow these problems will all sort themselves out.

They won’t. If you’re obsessed with defeating Trumpism, you should realize that you can only do that through securing a broad multicultural coalition, and you can’t do that when you’re alienating Hispanic voters or failing to challenge people in your political orbit when they insist that white children should be taught that they’re inherently and irreversibly racist. 70% of this country is white, Hispanic voters are not remotely as left-leaning as people assumed, immigrants are far from uniformly progressive, women were never actually a liberal stronghold, and you can’t win national elections by appealing only to the kinds of people who say “Black bodies” instead of “Black people.” This is the simple point David Shor has made for over a year, and for his trouble he gets a columnist in the Nation flat-out lying about him. Imagine a political tendency where popularism – literally, the idea that you should do things that appeal to voters – is immensely controversial. Liberalism is not healthy.

And your host will add: yu don’t need me to bash Republicans because there are already a gazillion people who do it, and you can read them instead of me.  Also, I feel more compelled to address problems in my own family (Democrats) than in that bad family across the street. It’s easier to settle family squabbles than reconcile the Hatfields with the McCoys.  Finally, it distresses me that my family is riven by a thousand differences, as well as imbued with apparent ignorance of what Americans want in their democracy—both of which will help spawn Republican victories down the road. At any rate, deBoer is right: we need a multicultural coalition, and the “elites” aren’t helping with that.

Now deBoer is not in my position on the political spectrum. In his Substack bio, he describes himself this way:

I write about everything but have a few jams that I engage with consistently. I am a Marxist of an old-school variety, which means I frequently complain about liberals, social democrats, and whatever “democratic socialism” is.

Second, and finally, what does the Left need?  deBoer, though perhaps “a Marxist of an old-school variety”, says this, first quoting Democratic ex-Senator Harry Reid, who, when asked what message he wanted to leave with America, answered “I want everybody in America to understand that if Harry Reid can make it, anybody can.”

And then deBoer riffs on that:

Does that sound anything like the message American liberalism wants to deliver now? Absolutely not. Today, American liberalism wants to tell you not that America can be a place of justice and equality where we all work together for the good of all, even as we acknowledge how badly we’ve failed that ideal. In 2021 liberalism wants to tell you that the whole damn American project is toxic and ugly, that every element of the country is an excuse to perpetuate racism, that those groups of people Hayes lists at the bottom are not in any sense in it together but that instead some fall higher on an hierarchy of suffering, with those who are perceived to have it too good in that hierarchy deserving no help from liberalism or government or the Democratic party – and, oh by the way, you can be dirt poor and powerless and still be privileged, so we don’t want you, especially if you’re part of the single largest chunk of the American electorate. Anyone who tows the line [sic] Harry Reid takes here is either a bigot or a sap, and politics is a zero-sum game where marginalized groups can only get ahead if others suffer, and Democrats fight to control a filthy, ugly, fallen country that will forever be defined by its sins. That’s the liberalism of 2021, a movement of unrelenting pessimism, obscure vocabulary, elitist tastes, and cultural and social extremism totally divorced from a vision of shared prosperity and a working class movement that comes together across difference for the good of all. In fact, I think I learned in my sociology class at Dartmouth that a working class movement would inherently center white pain! Better to remain divided into perpetually warring fiefdoms of grievance that can accomplish nothing. Purer that way. Now here’s Chris with part 479 of his January 6th series, to show us the country’s biggest problems.

Conservatives run roughshod over the country, and liberals are powerless to stop them, because liberalism has been colonized by a bizarre set of fringe cultural ideas about race and gender which they express in abstruse and alienating vocabulary at every turn. If anyone complains, liberals call them racist or sexist or transphobic, even when those complaining are saying that we can fight racism and sexism and transphobia more effectively by stressing shared humanity and the common good. Republicans tell the American people batshit conspiracy theories about communists teaching Yakub theory in kindergarten; Democrats fight back by making PowerPoint slides about why resegregating public schools is intersectional. We have reactionary insanity that expresses itself in plain, brute language and an opposition that insists that most voters don’t actually have any real problems, using a vocabulary that should never have escaped the conference rooms of whatever nonprofit hell it crawled out of. I cannot imagine a more obvious mismatch, the gleeful conspiracist bloodletting of the right against the sneering disdain and incomprehensible jargon of the left. I wonder who’ll win politically, an army of racist car dealership owners who have already taken over vast swaths of America’s state and local governments, keening for blood and soil? Or the guy in your anthropology seminar who insisted they were the voice of social justice while simultaneously making every conversation all about them?

This is all humorous and snarky, but also rings true. (I suppose deBoer’s Marxism is reflected in his concentration of class instead of race.) Be that as it may, the next time someone asks me why I bash the Left more often than the Right, I’ll just send them this post.