For a long time some of my Jewish friends, including observant ones, have told me that there’s a resurgence of anti-Semitism in American, sometimes implying that it would get so bad that they were considering moving to Israel. I’ve always poo-pooed this apocalyptic idea, thinking that Jews are now part of mainstream America and, although a minority (about 1-2%, many of them nonbelievers), we weren’t a denigrated minority.

Well, things have changed since the ultra-progressive Left has taken over, and since there’s been a resurgence of white nationalism on the Right. The Left’s activities are ongoing, as with the “progressive” members of Congress voting for BDS initiatives, issuing anti-Semitic or anti-“Zionist” tweets, and showing increasing valorization of Palestine—an apartheid country if ever there was one. Right-wing anti-Semitism seems to be on the ultra-extreme right, and erupts as sporadic demonstrations, like the one in Charlottesville.

Whoever is responsible for this trend, the result is that we hear more about anti-Semitic incidents all the time. This isn’t just a news bias, since the mainstream media itself, like the NYT, aren’t especially pro-Jewish (they’re pro-Palestine); and the number of Jewish “hate crimes” is increasing. Jews are, in fact, on a per capita basis the religious group most targeted by such crimes:

According to the FBI data, 8,263 hate crimes took place in America in 2020, an increase of nearly 9% compared to the 7,287 reported in 2019. Of all reported hate crimes, 1,174 targeted victims due to their religion and 676 of them—54.9% of all religious bias crimes—targeted Jews. 53% of hate incidents targeting Jews involved the destruction, damage, or vandalism of property; 33% were instances of intimidation; 6% were simple assaults; 4% were aggravated assaults; 1% were instances of burglary or breaking and entering; and 1% were instances of larceny or theft.

This article below from the Washington Post (click on screenshot) might be an isolated incident, as it’s unique to my knowledge, but it might also display how far the rot has spread. (The article is reproduced almost verbatim in the Times of Israel as well.)

I’ll summarize what happened, and will put quotation marks around quotes from the pieces.

At Watkins Elementary school in southeast Washington, D.C. a group of third graders (~9-10 years old) were in the library doing a self-guided project. But the students were coopted by a school librarian who forced the students to reenact scenes from the Holocaust.  Here’s what the students were forced to do:

This is the most offensive part:

The instructor allegedly made antisemitic comments during the reenactment. The parent said that when the children asked why the Germans did this, the staff member said it was “because the Jews ruined Christmas.”

Can you believe that?

Although the instructor told the students not to say anything about this little exercise, the kids told their parents. The good news is that all hell broke loose, because some of the students were Jewish.  The principal of the school, one M. Scott Berkowitz (probably a Jewish name as well) apologized in an email to the parents without naming the staff member (I now have her name; see below).

“I want to acknowledge the gravity of this poor instructional decision, as students should never be asked to act out or portray any atrocity, especially genocide, war, or murder,” Berkowitz said in the email.

The incident was reported to D.C. Public Schools’ Comprehensive Alternative Resolution and Equity Team. The staff member is now on leave, pending a school investigation.

“This was not an approved lesson plan, and we sincerely apologize to our students and families who were subjected to this incident,” a spokesperson for DCPS said.

The entire class met with the school’s mental health response team after the Friday incident, according to Berkowitz’s email.

The good news is that the school didn’t blow it off. But they shouldn’t have anyway; it’s only “good news” because Americans are becoming increasingly anti-Semitic.

Anti-Semitism is especially distressing when it’s among the black community (Farrakhan and the Nation of Islam are the worst offenders). Historically Jews and blacks have been friends, with Jews forming a large proportion of white civil rights activists in the Sixties.

This article (and several other sources) give the librarian’s name as Kimberlynn Jurkowski, and at first I thought she was of Polish descent. But her LinkedIn page, showing undoubtedly the right person (a “library media specialist” in Washington, D.C.), reveals that she’s black. (How did she get the surname Jurkowski?) 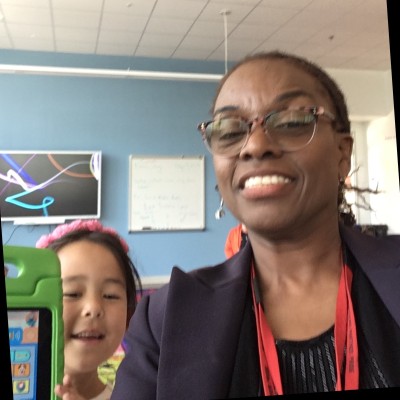 And she’s got a history that could charitably be described as “checkered”:

The librarian — identified as Kimberlynn Jurkowski — was accused in a tutoring scam in New Jersey that defrauded the Atlantic City school district of thousands of dollars and had her teaching licenses suspended for three years by the state Department of Education in 2017.

. . . A former Hamilton, Atlantic County resident, Jurkowski faced charges of theft by deception and fraud for allegedly billing the Hamilton school district for tutoring services for her two children that was never performed, according to the state’s order of suspension.

The Hamilton Township school district paid the cost of the tutoring to Bridges Education and Counseling Services, and its owner, Mildred Spencer — a friend of Jurkowski, according to the ruling.

After the tutoring services had ended, Jurkowski and Spencer allegedly conspired to continue to bill the district for six additional months — from October 2011 through March 2012, officials said.
In December 2013, Jurkowski and Spencer were accepted into a pretrial intervention program for first-time offenders for six months, and Jurkowski was forced to forfeit her employment in the school district, according to the Department of Education ruling.

Other local schools have reported incidents of bigotry in recent months. At Woodrow Wilson High School in Northwest Washington, several swastikas, the n-word and the phrase “white power” were scrawled on the wall of a men’s bathroom early this month, according to reporting by student journalists at the Beacon, the school’s independent newspaper.

And from the Times of Israel:

Last month vandals broke into a fraternity house at George Washington University in Washington, DC, and desecrated a Torah scroll, tearing it apart and covering it with detergent.

I just noticed that the New York Times has a short piece on the incident, and names the perpetrator, as well as mentioning Jurkowski’s LinkedIn page, but doesn’t mention that she’s black. Is race relevant in a case like this? If a white librarian had asked black children to reenact scenes from slavery, wouldn’t the paper mention that the librarian was white? Had the librarian been an anti-Semitic white supremacist, you could have bet that every report would have mentioned that.

My guess is that it was just terribly inconvenient to mention the race of the perpetrator, which goes against The Narrative. The NYT has a history of omitting the race of the people who attacked ultra-Orthodox Jews in New York City over the last several years, though nearly all the attackers were black. When there’s a pattern like this, race does become relevant.

84 thoughts on “D.C. school librarian fired after making students reenact the Holocaust—including dying in a gas chamber and shooting their classmates—to show how the “Jews ruined Christmas” for Germans”