We’re having a touristic/historical photo experience today courtesy of reader Athayde Tonhasca Júnior.  Athayde’s words are indented (quotes from Wikipedia are doubly indented), and you can enlarge the photos by clicking on them.

Perhaps the crew would enjoy a short trip to a British Historical site.

Any history buff visiting UK (traveling is just around the corner, let’s have faith…) should consider a trip to The Vindolanda Museum and Hadrian’s wall. Both are about 1 h from Newcastle.

“Vindolanda was a Roman fort and is an active archaeological site located in Northumbria. Predating the construction of Hadrian’s wall, Vindolanda provides a look at Roman life on the frontier. Based on current excavations, archaeologists date the fort as being occupied from 85 BCE to 370 CE.. 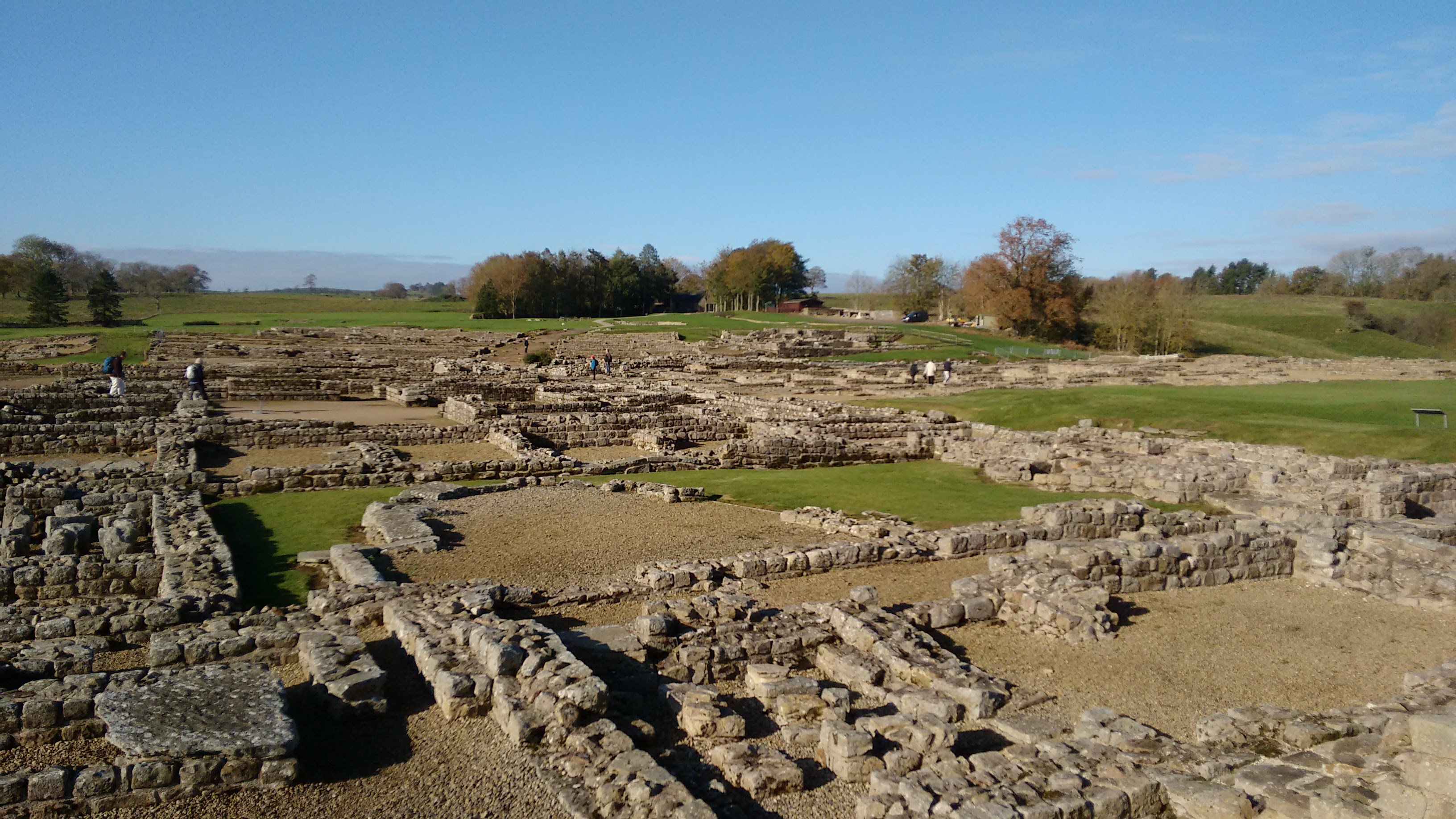 This site is significant due to the artifacts that have been preserved in the Anoxic conditions of the area, such as the Vindolanda tablets, which are the oldest preserved writing in Britain. The Vindolanda Tablets were, at the time of their discovery, the oldest surviving handwritten documents in Britain They are a rich source of information about life on the northern frontier of Roman Britain. Written on fragments of thin, post-card sized wooden leaf-tablets with carbon-based ink, the tablets date to the 1st and 2nd centuries AD (roughly contemporary with Hadrian’s Wall). The documents record official military matters as well as personal messages to and from members of the garrison of Vindolanda, their families, and their slaves. Highlights of the tablets include an invitation to a birthday party held in about 100 AD, which is perhaps the oldest surviving document written in Latin by a woman. The translation is as follows:

Claudia Severa to her Lepidina greetings.

On 11 September, sister, for the day of the celebration of my birthday, I give you a warm invitation to make sure that you come to us, to make the day more enjoyable for me by your arrival, if you are present. Give my greetings to your Cerialis. My Aelius and my little son send him their greetings.

I shall expect you, sister. Farewell, sister, my dearest soul, as I hope to prosper, and hail.

To Sulpicia Lepidina, (wife) of Cerialis, from Cl. Severa.“

Photo and caption from Wikipedia:

The tablets are fantastic, and so are the shoes. They don’t look very different from our footwear. From the Museum website: “One of the most prevalent types of objects to come from the site are leather boots and shoes. We have some 5,000 of them in many different shapes and sizes. They tell us a lot about the people who lived here nearly 2,000 years ago.” 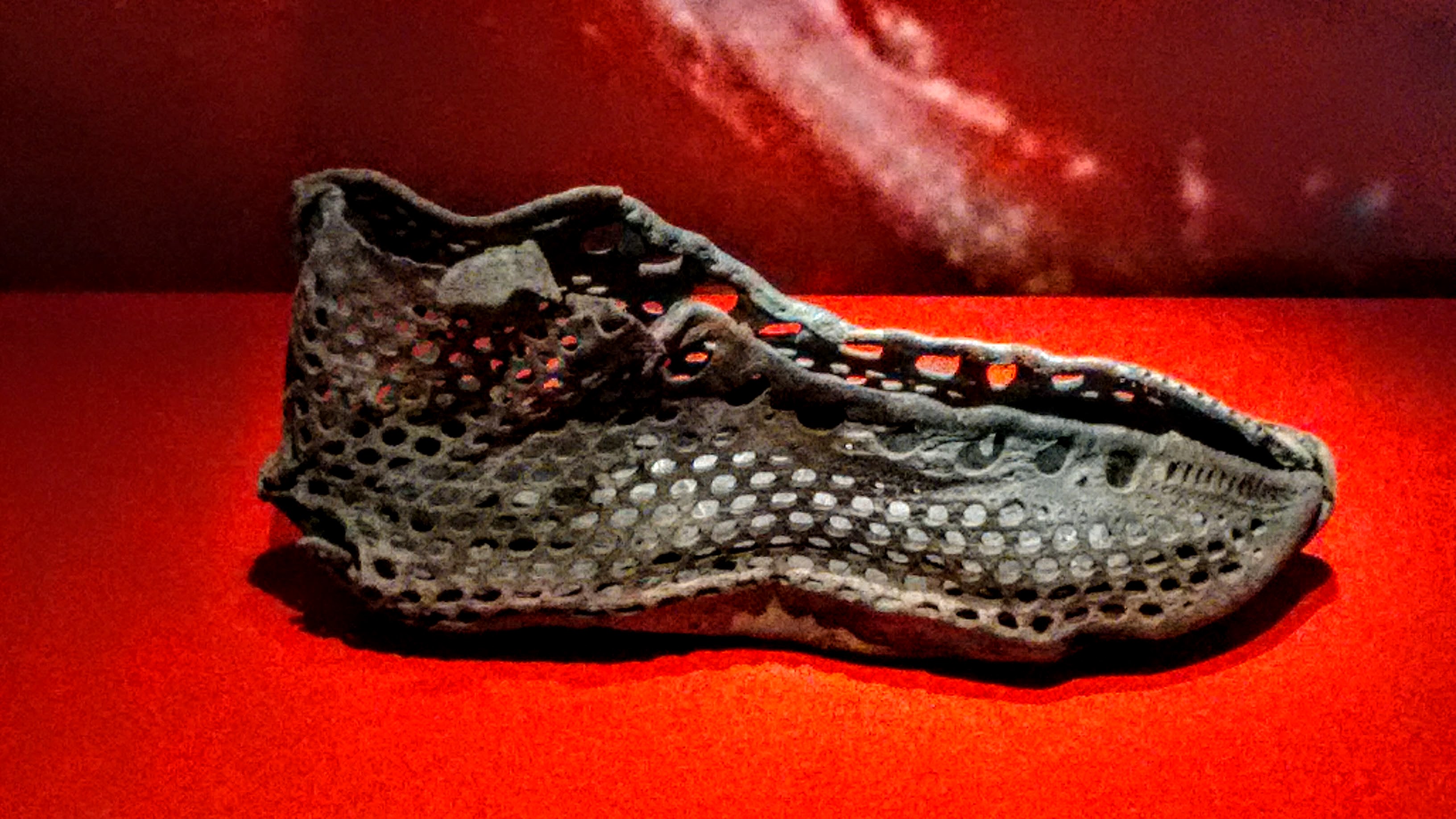 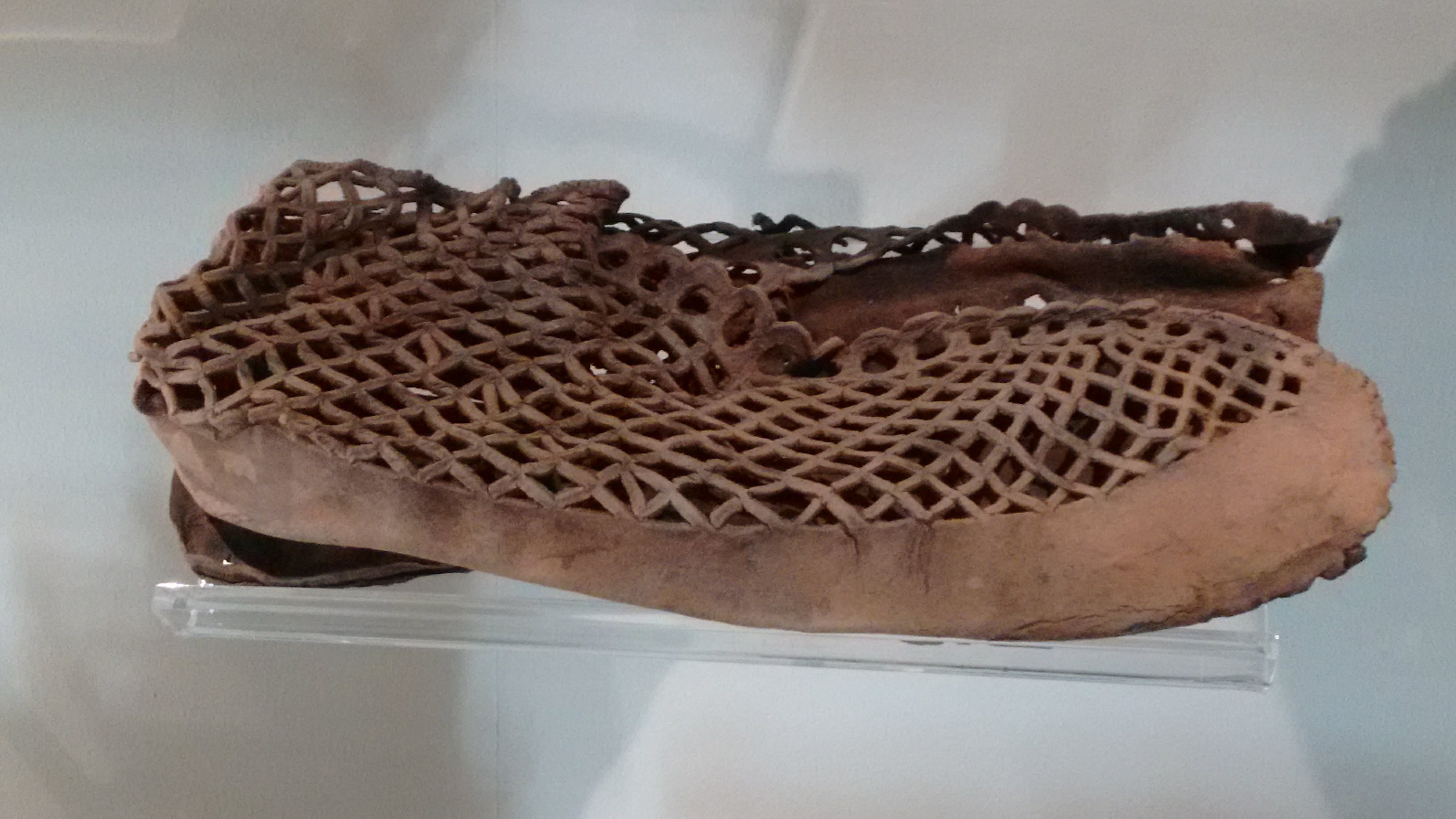 As for the Hadrian Wall, “it is the remains of stone fortifications built by the Roman Empire following its conquest of Britain in the second century A.D. The original structure stretched more than 70 miles across the northern English countryside from the River Tyne near the city of Newcastle and the North Sea, west to the Irish Sea. Hadrian’s Wall included a number of forts as well as a ditch designed to protect against invading troops. The remnants of a stonewall are still visible in many places. Contrary to popular belief, Hadrian’s Wall does not, nor has it ever, served as the border between England and Scotland, two of the four countries that make up the United Kingdom. However, it does hold significance as a UNESCO World Heritage site and a major tourist attraction” (History website).

Section of the wall by Vinolanda: 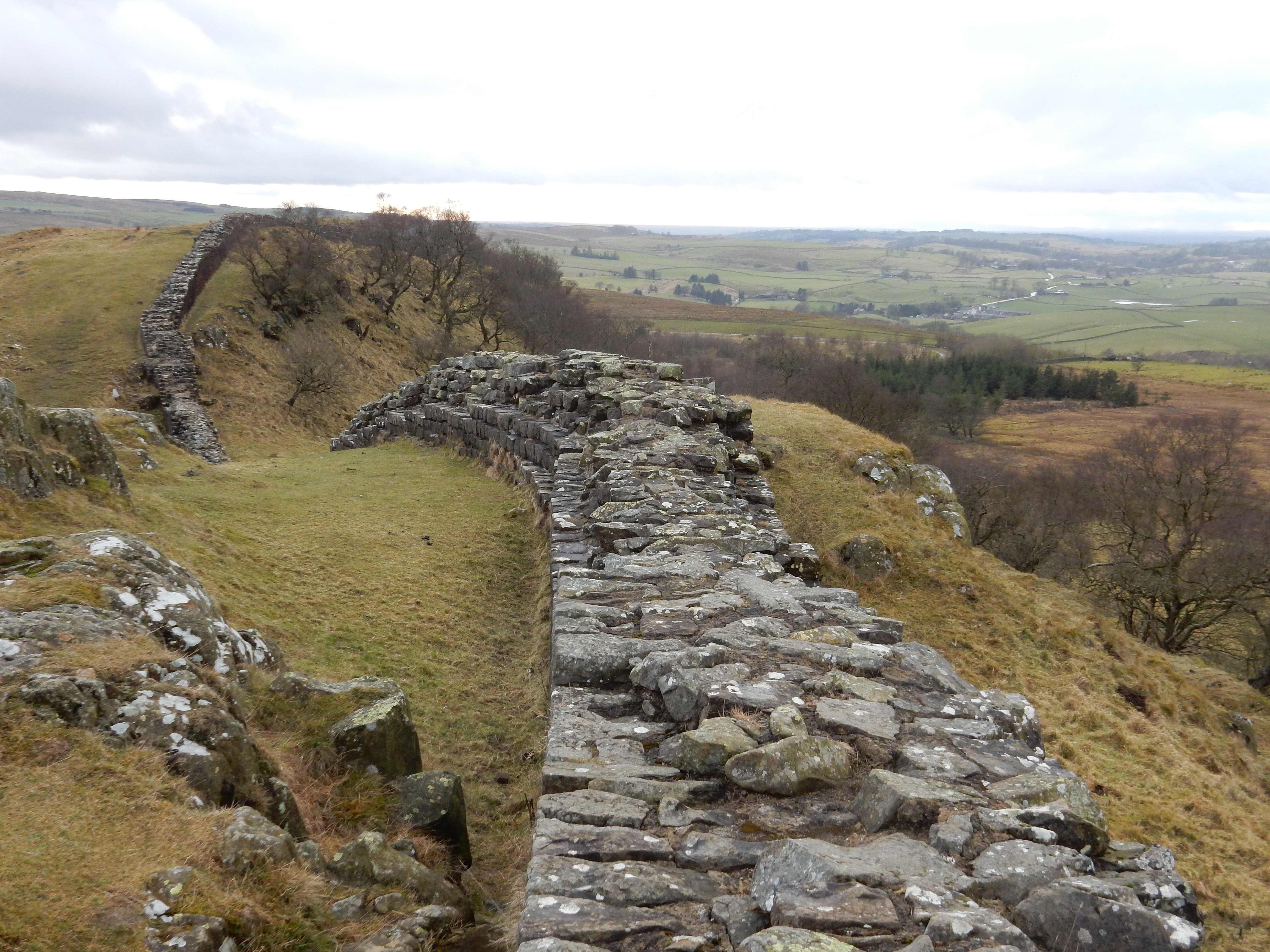 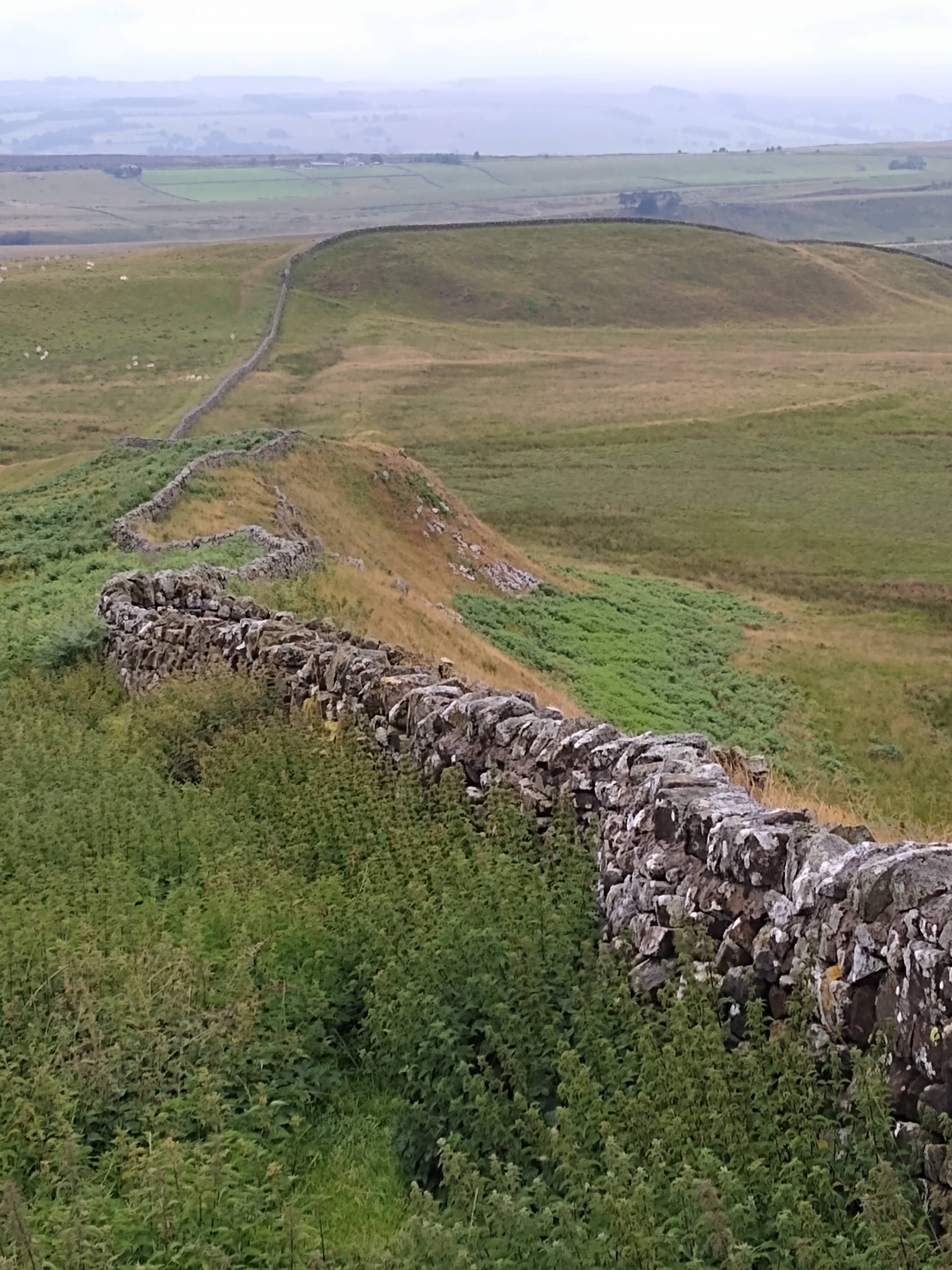 The tree marks the Sycamore Gap, one of the most photographed spots in the country. The tree of uncertain age—”a few hundred” is the best estimate—stands along the Hadrian Wall, about 3 km west of the Roman Fort. It’s a nice walk, but the terrain can be challenging to some. You already saw it if you watched ‘Robin Hood: Prince of Thieves’ with Kevin Costner. 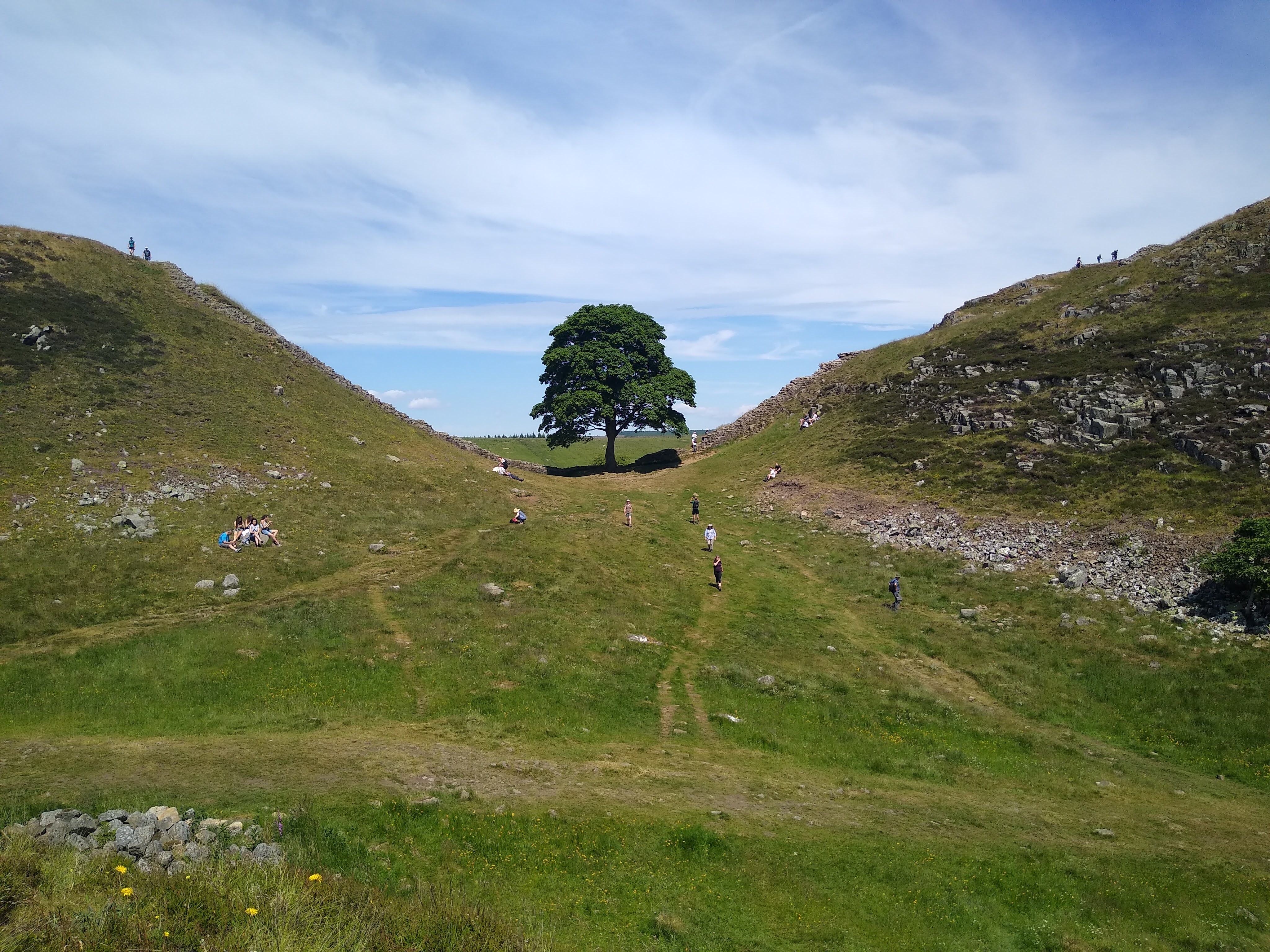 And what our photographer dubs “The latest archaeological discovery at the site”: 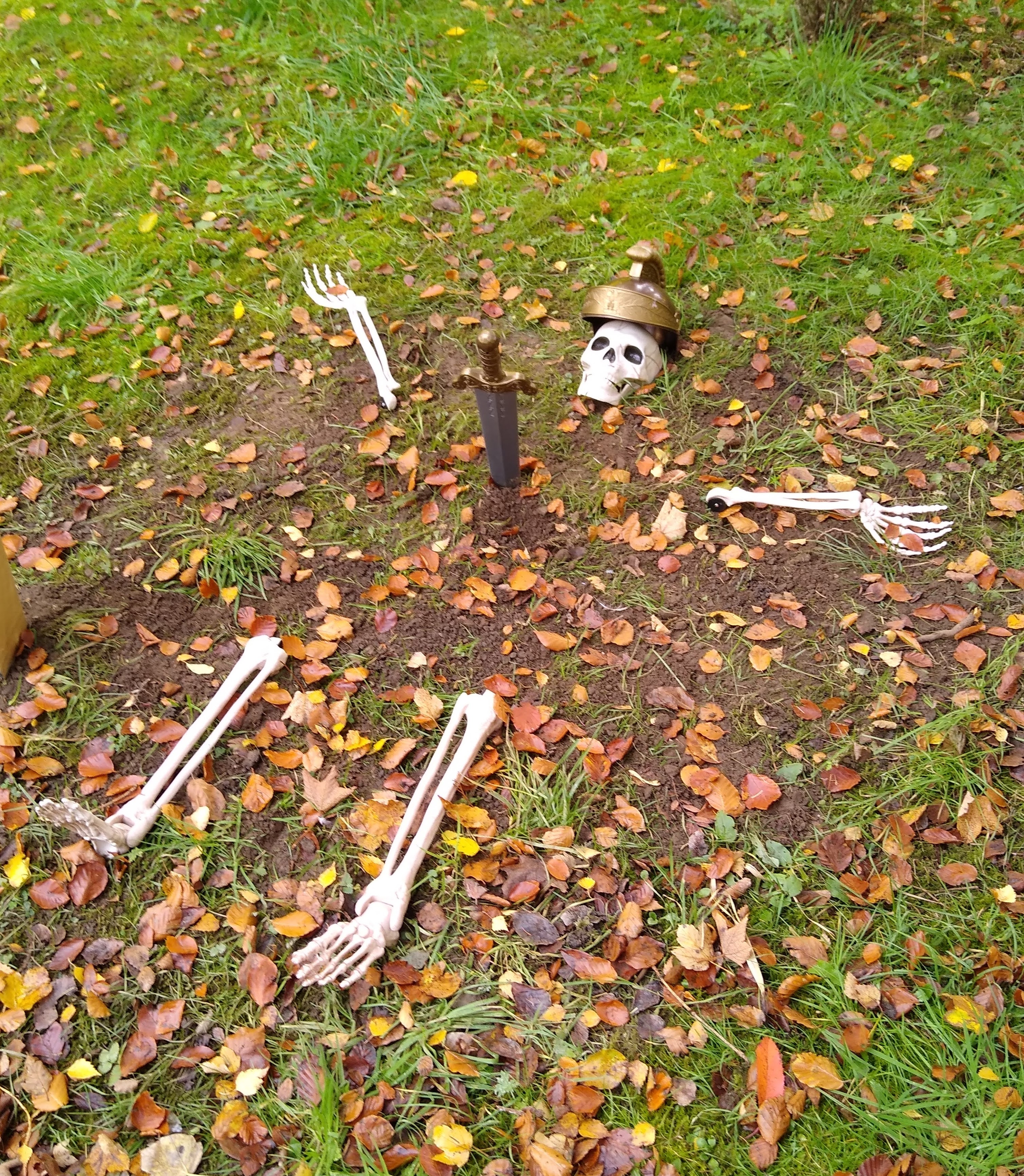 JAC: Here’s a map of Hadrian’s Wall, a World Heritage site, which runs 73 miles from coast to coast (there’s a footpath); much of it remains. Wikipedia notes:

Hadrian’s Wall marked the boundary between Roman Britannia and unconquered Caledonia to the north. The wall lies entirely within England and has never formed the Anglo-Scottish border.

You can read about the more northerly Antonine Wall here. 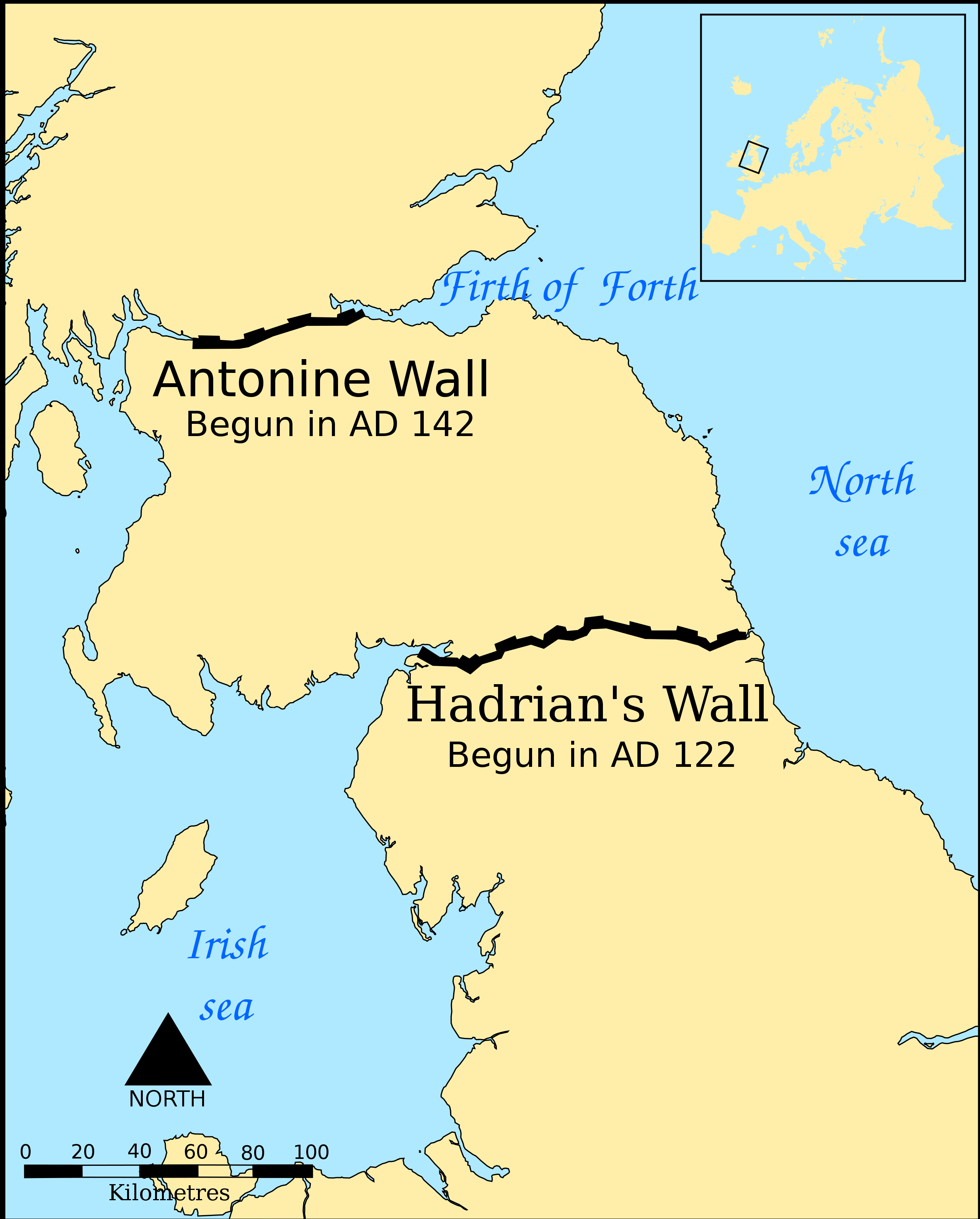