I received an email from reader Paul Topping, and I thought it was both amusing and sad. I have his permission to post it, so I’ll give it to you just as I got it:

My wife and I watch “Jeopardy!” regularly. This last Tuesday, they had an answer and question that might amuse you. This week and last they are doing their “Professors Tournament” which, obviously, features college professors. This question/answer was the “Daily double” in the first (single) Jeopardy part of the show.

Biologist T.H. Huxley was a renowned defender of this theory & in 1893 famously lectured on it ‘& Ethics’

Sorry, the question is “What is evolution?”

I don’t think this contestant was well-informed on science. She laughed out loud when the subject for Final Jeopardy was introduced: Physics. 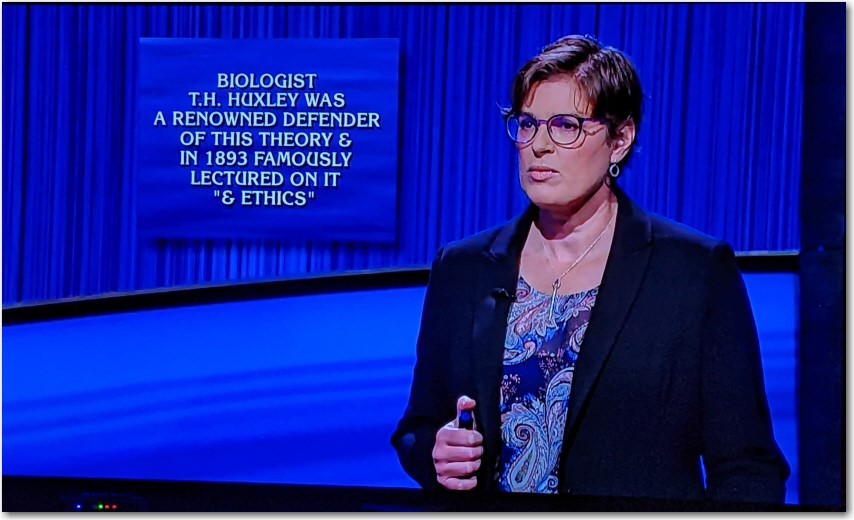 When I wrote Paul that this was both sad and funny, he responded:

t’s interesting but not surprising that someone would know just enough science to name scientists to cancel but not much beyond that. If it’s any consolation, she lost the contest.

It would be an English professor, wouldn’t it? (Or a sociologist or cultural anthropologist!)

I’ve written about T. H. Huxley (“Darwin’s bulldog”) several times, and about how his reputation has been unfairly besmirched. Huxley College of the Environment at Western Washington University, for instance, has been renamed because the University deemed Huxley a racist. Now T. H. seems to be more associated with eugenics than with biology, abolitionism, or science education. And he was NEVER a proponent of eugenics!

70 thoughts on ““Jeopardy” shows that the Woke have won”