I was SO happy when Matthew sent me this tweet early this morning! Wisdom has come back to Midway to breed again. At 70, she is the oldest wild bird known to exist, and the bird who has been banded the longest!

I’ve written about Wisdom before: she’s the Honey of seabirds, but much older (wild mallards typically live 8-10 years if they fledge). She keeps coming back to Midway every year to breed, and many have grown to love her for her tenacity. I’m not sure why I’m so happy about her return, but I have the same feeling when Honey comes back to Botany Pond in the Spring.

There’s a long article about Wisdom on Wikipedia, and I’ll give a few quotes. First, though, note that she is a Laysan albatross and Wikipedia gives some information about the species:

The Laysan albatross (Phoebastria immutabilis) is a large seabird that ranges across the North Pacific. The Northwestern Hawaiian Islands are home to 99.7% of the population. This small (for its family) gull-like albatross is the second-most common seabird in the Hawaiian Islands, with an estimated population of 2.5 million birds, and is currently expanding (or possibly re-expanding) its range to new islands. The Laysan albatross was first described as Diomedea immutabilis by Lionel Walter Rothschild, in 1893, on the basis of a specimen from Laysan Island.

The range from the Cornell site:

I think that Midway Atoll, shown in the map below, counts as a Northwestern Hawaiian island: 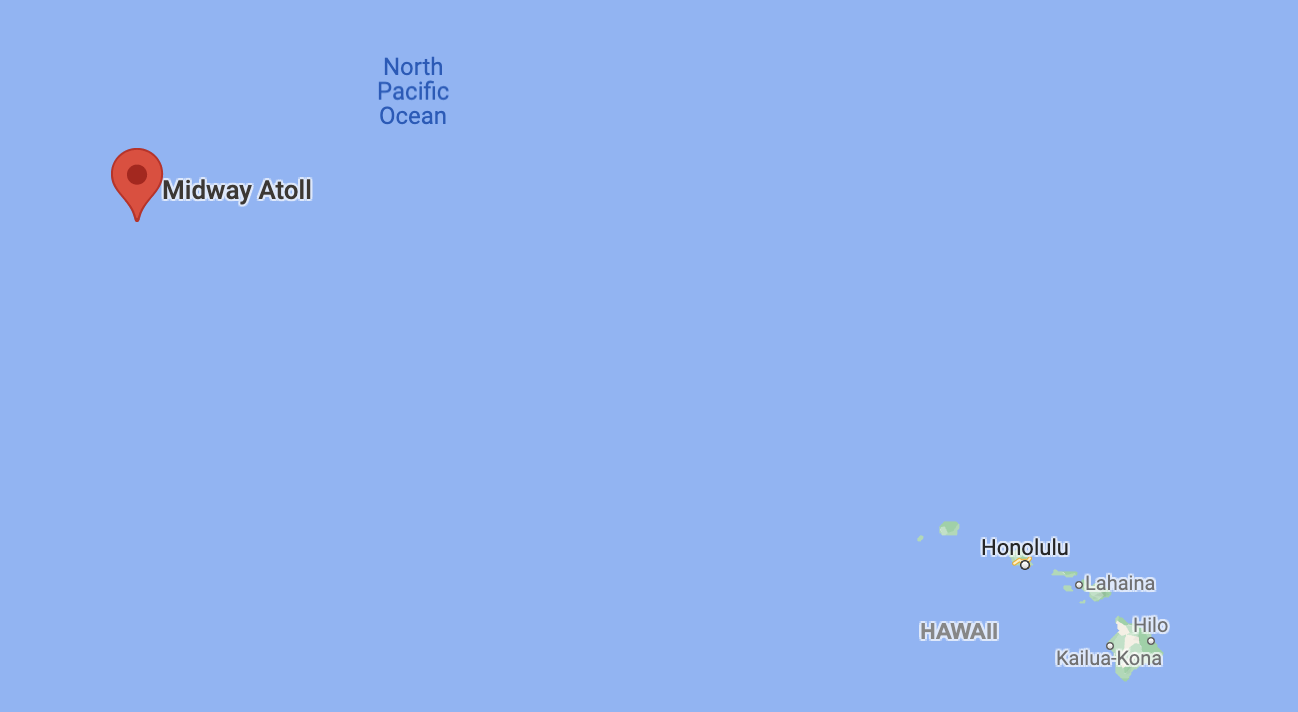 A photo of Wisdom with her chick (they almost always have just one) in 2011 when she was 60: 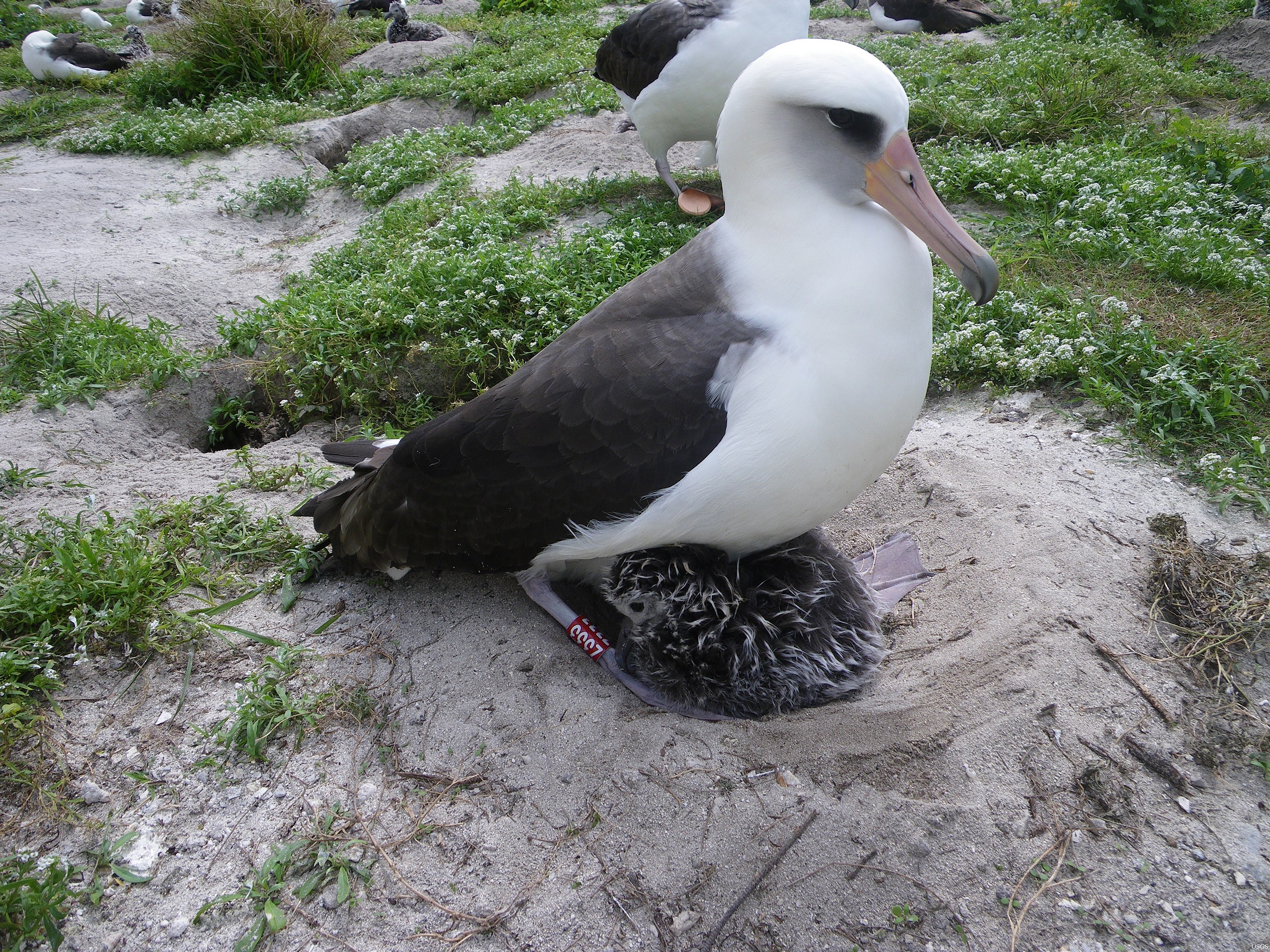 And I’ll reproduce everything about Wisdom from the Wikipedia site. She may be older than I am! Emphases are mine:

Wisdom hatched around 1951, and possibly earlier. In 1956, she was tagged by scientists as #Z333 at the Midway Atoll National Wildlife Refuge. It is likely that Wisdom is older than 70, as when she was banded in 1956, she was conservatively estimated to be five years old — the earliest age that the Laysan albatross reaches sexual maturity. The person to attach the first tag was Chandler Robbins, who was a senior scientist at the United States Geological Survey (USGS). Birds are banded so that their populations can be monitored and individuals can be studied for data such as their longevity, behavior and migration patterns.

On December 3 2014, Wisdom made headlines when she laid an egg at Midway Atoll. Her mate had arrived at the atoll on November 19, and Wisdom was first spotted by the refuge staff on November 22. The egg was estimated to be the 36th egg that Wisdom had laid; albatrosses lay one egg per year, and have monogamous mates for life.  Smithsonian speculated that due to Wisdom’s unusual longevity, she may have had to find another mate in order to continue breeding.

The USGS has tracked Wisdom since she was first tagged, and have estimated that Wisdom has flown over 3,000,000 miles (4,800,000 km) since 1956 (approximately 120 times the circumference of the Earth). To accommodate her longevity, the USGS has replaced her tag a total of six times She and her chick survived the 2011 Tōhoku earthquake and tsunami that killed an estimated 2,000 adult Laysan and black-footed albatrosses, and a much larger number of chicks, at the refuge.

Wisdom has laid some 30–40 eggs in her lifetime. Between 2005 and 2014, Wisdom laid eight eggs, and hatched and reared another chick in December 2016 at the approximate age of 66. In December 2017, she bred again, and has successfully hatched a chick every year since 2006. In December 2018, USFWS Pacific Region reported that Wisdom had returned to the Midway Atoll and had laid an egg.The egg hatched in February 2019.

In December 2020, it was reported that Wisdom was again incubating an egg. The chick hatched on 1 February 2021 at age of 70, biologists has also estimated that she has at least 30–36 chicks.

And here’s her chick from February of this year (note the band), which reads Z333 in both cases. 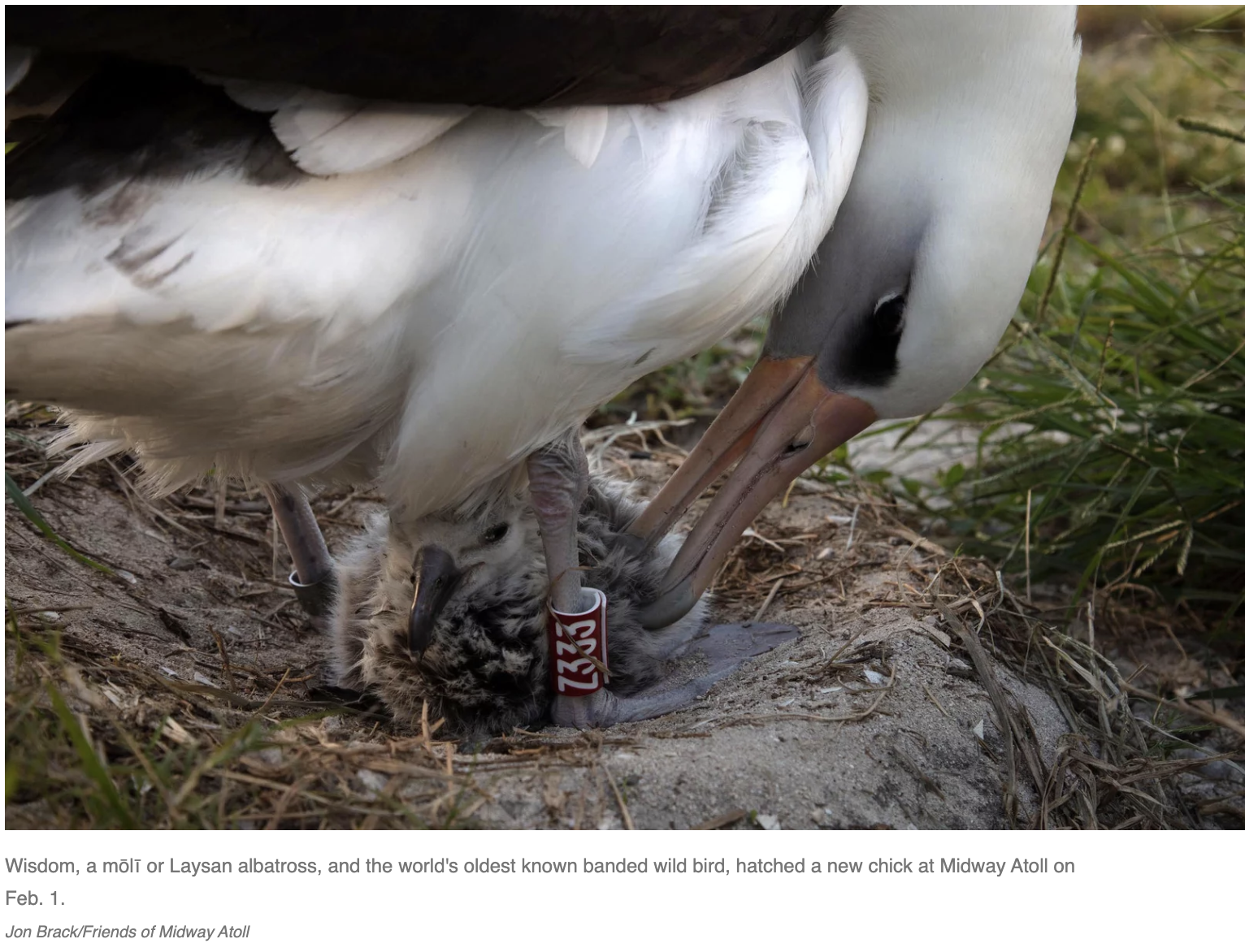 A bit more from Wikipedia on Wisdom’s “impact”:

The United States Fish and Wildlife Service has stated, “Wisdom’s continued contribution to the fragile albatross population is remarkable and important. Her health and dedication have led to the birth of other healthy offspring which will help recover albatross populations on Laysan and other islands.”

Bruce Peterjohn, chief of the North American Bird Banding Program, stated that Wisdom “[Was] now the oldest wild bird documented in the 90-year history of [the] USGS-FWS and Canadian bird banding program. To know that she can still successfully raise young at age 60-plus, that is beyond words.” [JAC: Indeed!]

Wisdom has received coverage from many major news sources in the United States and elsewhere, including The Guardian, National Geographic,  Discovery News, and 60 Minutes. In January 2020, Wisdom was featured in episode 3, “Hawaii”, of BBC Two’s Earth’s Tropical Islands.

Now you may be wondering how such an old bird can keep producing eggs. But in fact, there are only five species of animal whose females undergo menopause: humans and four marine mammals—beluga whales, narwhals, killer whales, and short finned-pilot whales. (“Menopause” means that females simply stop reproducing at a roughly predictable age but can live on for an appreciable time after that.)

So we are alone with these whales as the only animals whose females stop reproducing before they die. Even other primates lack menopause in females! This means that we evolved menopause independently of not just other primates, but of the whales. Further, the Nature article linked above suggests that, in the phylogeny of whales, menopause also evolved independently several times.

33 thoughts on “At 70, Wisdom the albatross, the oldest known living wild bird, has returned to Midway Atoll to breed again!”