We occasionally see some ignoramus claiming that religion is making a comeback everywhere. Well, that might be true in some places, but certainly not in the U.S., Britain, and continental Europe, whose residents are becoming nonbelievers at a very rapid pace.

I have no real explanation for that save that mythology is no longer tenable in an age of science, and, most probably, because as people become more well off, they become less religious. The last phenomenon has been well documented, and has been explained this way: “when you have society to take care of you, and have a place to live, money, health care, and food, you no longer need to believe in a divine being who will support you or to whom you can appeal for succor.” There’s a ton of evidence for that hypothesis, including negative correlations between happiness and well-being on one hand and religiosity on the other. These are just correlations, and not necessarily indications of causality, but they hold not just for the countries of the world, but for the states of the U.S. And there’s independent evidence for the latter hypothesis, which was first suggested by Marx. Most people just quote the bit in bold, but it becomes clearer what Marx was getting at when you read the real quote, which is from A Contribution to the Critique of Hegel’s Philosophy of Right:

At least in that assertion, Marx pretty much got it right.

The data on reduction of religiosity are given in this summary of a recent Pew poll (click on the screenshot below to read; the pdf of the full report is here).  And here’s the methodology:

Polls from earlier years are described in the pdf. 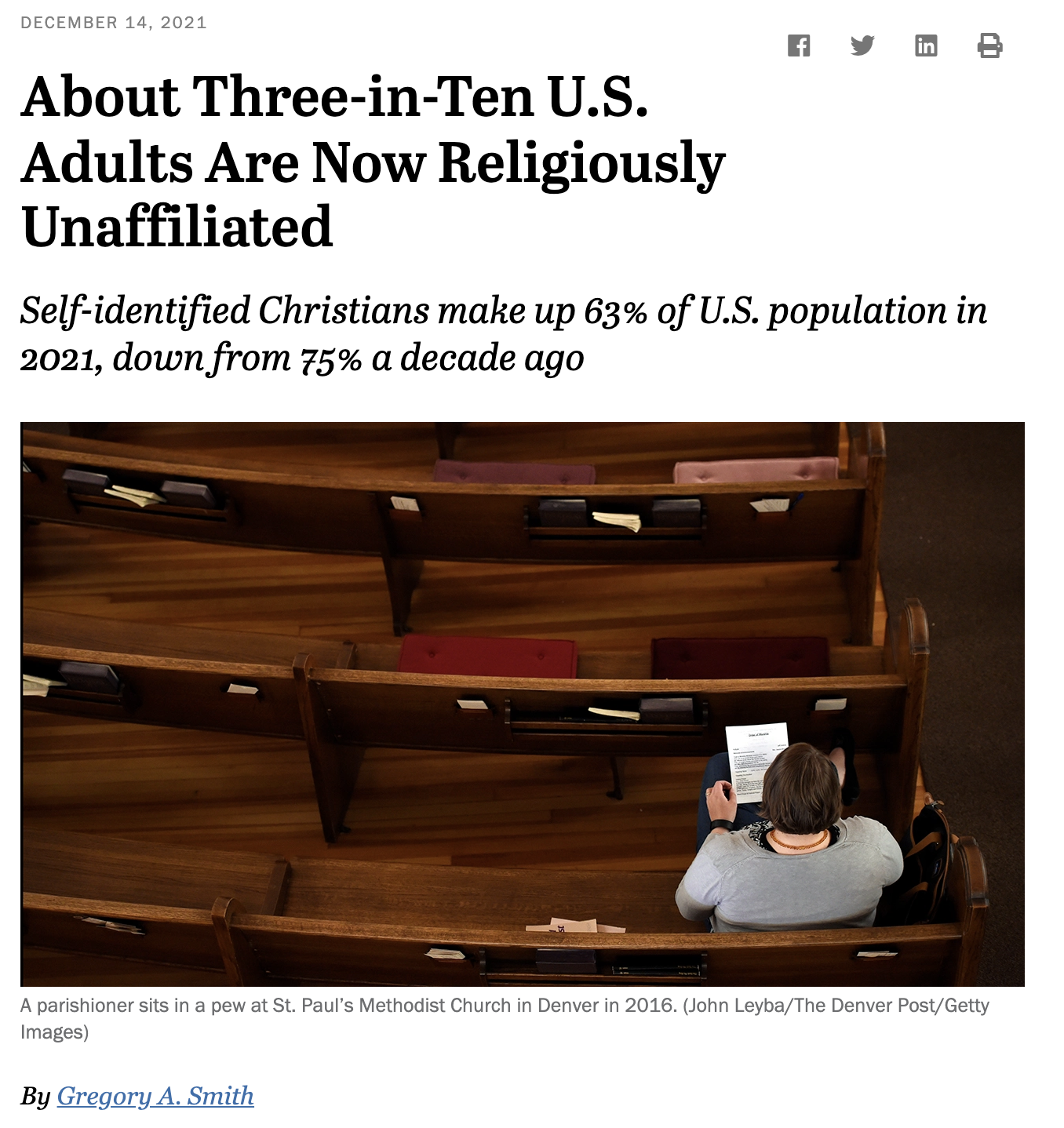 What has become clearer to me from this poll is that the “nones”, the fastest-rising group of “believers”, aren’t really people who believe in God and haven’t affiliated themselves with a church. Some of them may well be, but I believe they call themselves “nones” because it’s less damning than saying you’re an “atheist” or an “agnostic.” From this I take the lesson that the percentage of Americans who believe in a divine being is dropping rapidly, and about a quarter of us are nonbelievers, whether you call them “nones,” “atheists,” or “agnostics.”

First, let’s look at what the categories mean. All are by self-identification, and, in particular, “nones” are “people who describe themselves as atheists, agnostics, or nothing in particular.”  The crucial part is what “nothing in particular” really means. Does it mean you believe in a divine being? It’s a bit ambiguous, which makes it hard to suss out the proportion of nonbelievers in America. We’ll get to that in a second. First, I’ll show data on the drop of religiosity and rise of “no religion” (atheists, agnostics, and nones) over the last 14 years. Remember, that’s not very long!

Christians, including Catholics, evangelical Protestants, and non-evangelical Protestants, have dropped 15% over the period; as we’ll see, most of this involves Protestants. People of no religion, on the other hand, have nearly doubled in proportion—from 16% to 29%. Other religions (Jews, Muslims, Buddhists, etc.) haven’t changed much, but they are only 6% of the population—about a fifth of those with “no religion”. As the report says:

Currently, about three-in-ten U.S. adults (29%) are religious “nones” – people who describe themselves as atheists, agnostics or “nothing in particular” when asked about their religious identity. Self-identified Christians of all varieties (including Protestants, Catholics, members of the Church of Jesus Christ of Latter-day Saints, and Orthodox Christians) make up 63% of the adult population. Christians now outnumber religious “nones” by a ratio of a little more than two-to-one. In 2007, when the Center began asking its current question about religious identity, Christians outnumbered “nones” by almost five-to-one (78% vs. 16%). 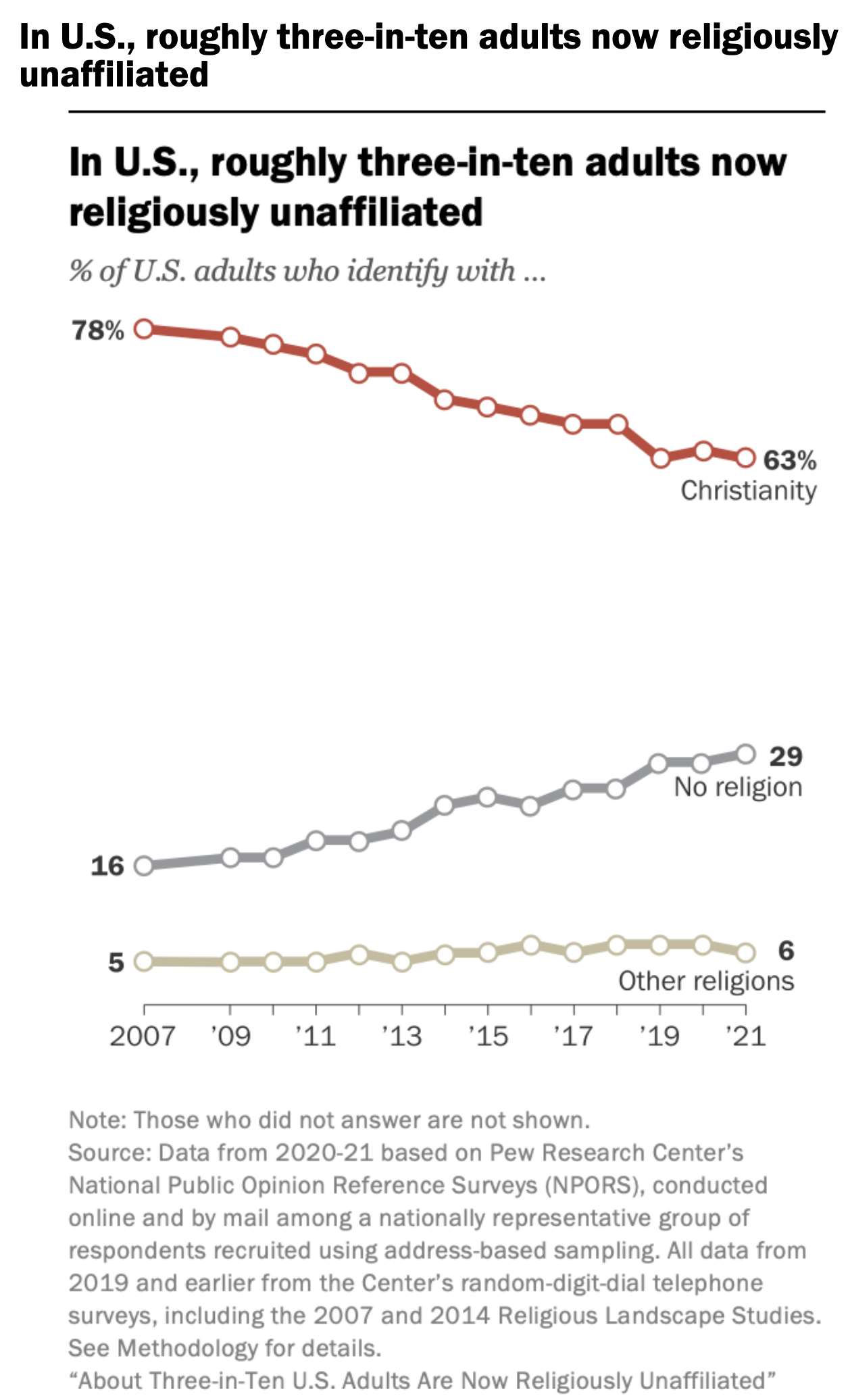 Nearly all the declines are among Protestants (and, as we’ll seen, among both evangelical and non-evangelical Protestants). These graphs speak for themselves. Catholics appear to cling more tenaciously to their faith, perhaps because they fear the terrors of hell. (I’m joking!) 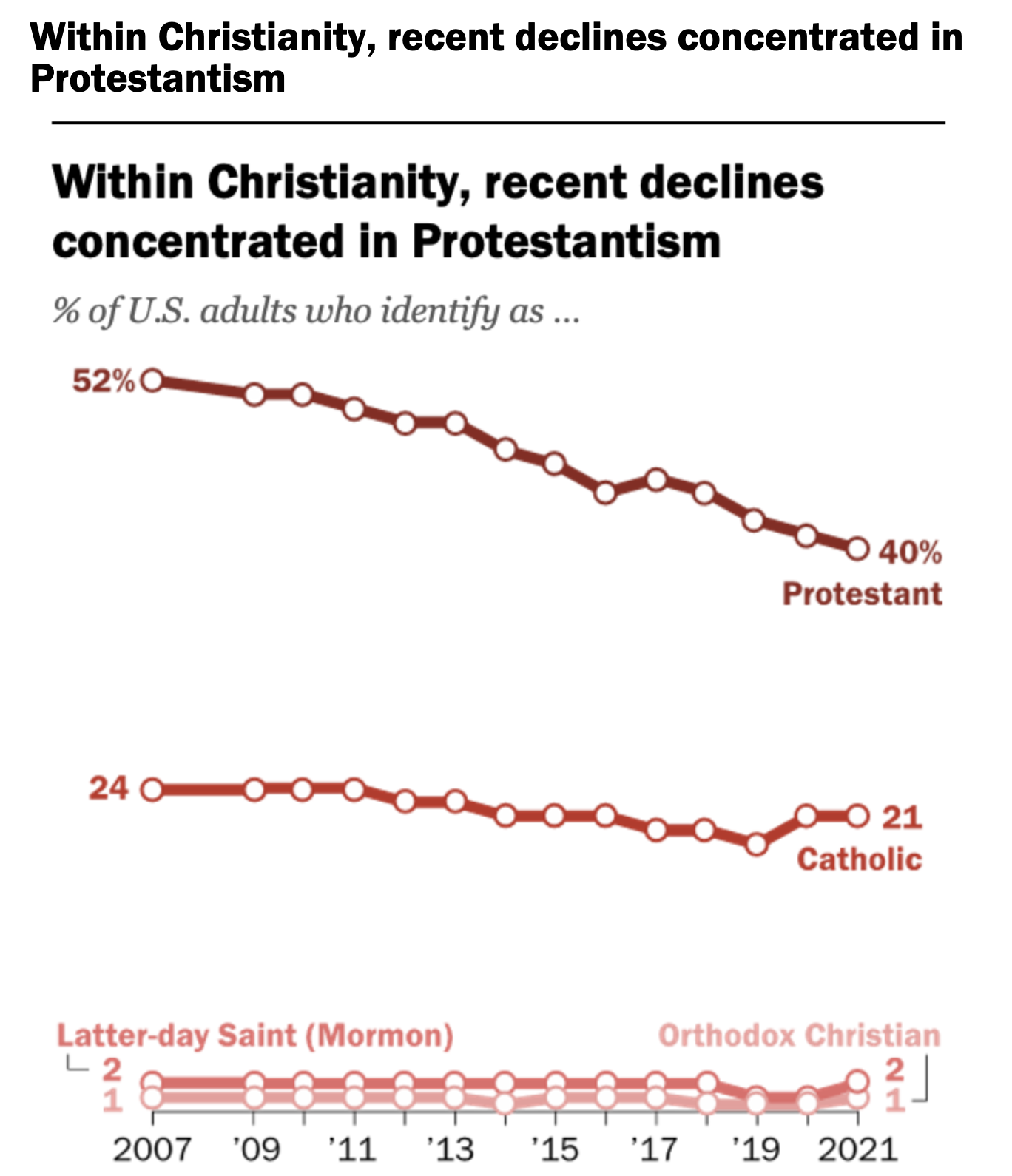 There’s a graph showing, surprisingly, that “born again” or evangelical Christians (Protestants) outnumber non-evangelical ones. I guess the Protestants I know are a non-random sample:

Within Protestantism, evangelicals continue to outnumber those who are not evangelical. Currently, 60% of Protestants say “yes” when asked whether they think of themselves as a “born-again or evangelical Christian,” while 40% say “no” or decline to answer the question.

The decline of religiosity is also instantiated by the following two graphs, showing a decline in Americans who pray daily (an oft-used sociological index of “religiosity”), as well of those who consider religion “important in their lives”: 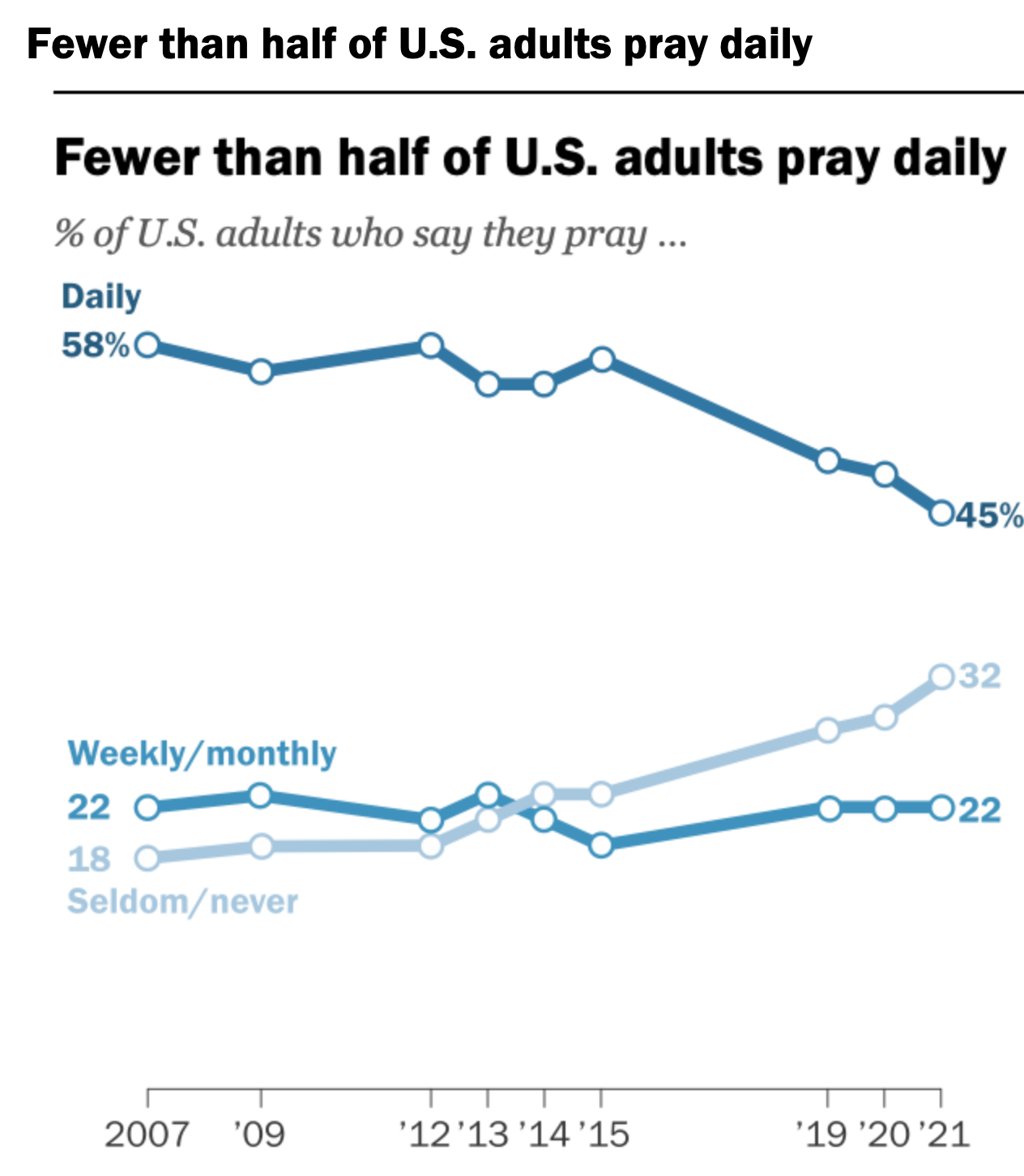 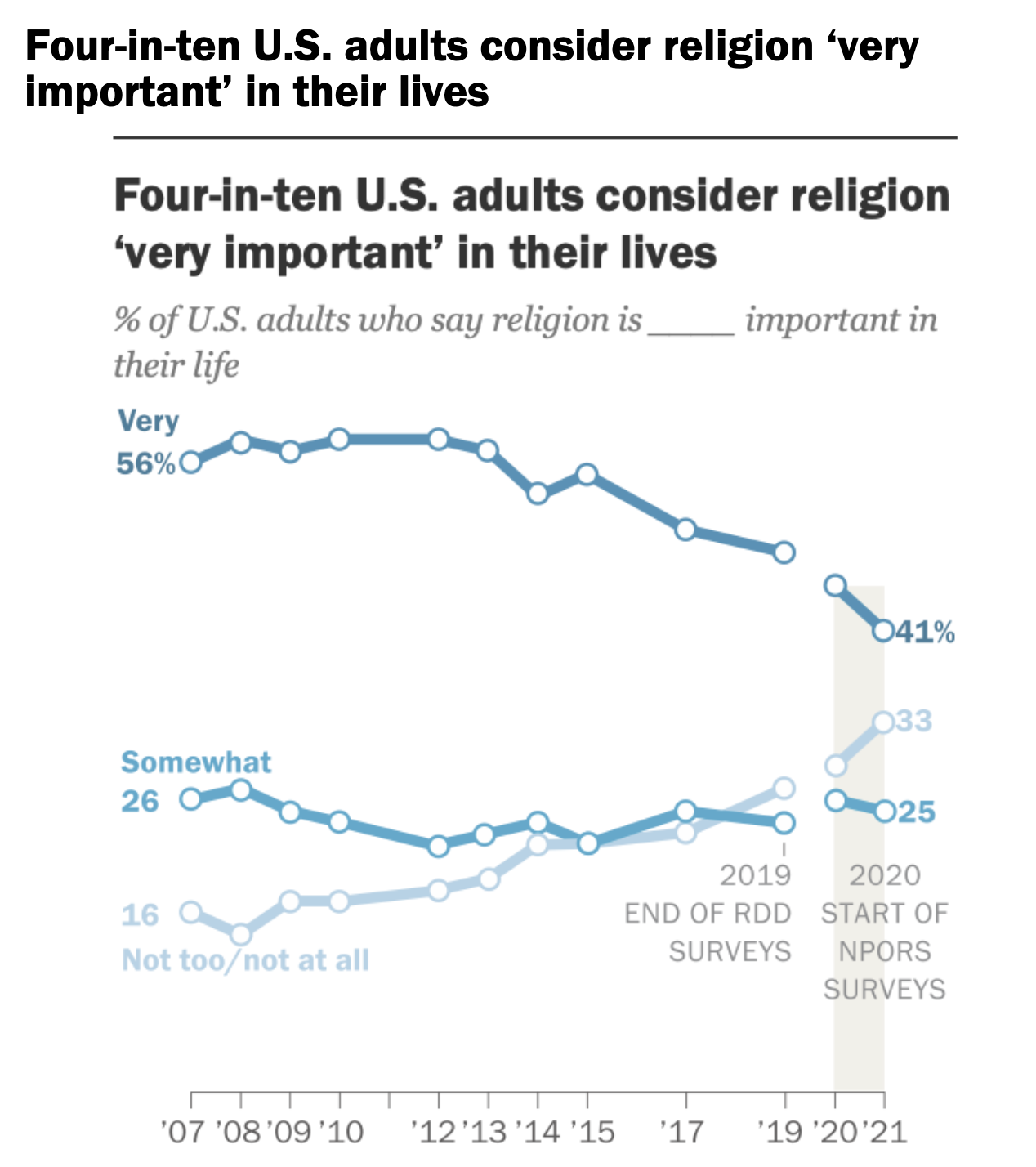 I won’t show the graphs, but will just state that, in the 2020-2021 data, about 32% of Americans say that go to religious services “monthly or more”, about 67% “a few times a year or less”, and of the latter, about a quarter of adults say they never go to church, which comports with the percentage of nones (29%).

And (drum roll), what percentage of those nones self identify as “atheists”, “agnostics” or “nothing in particular”? Here are the data over the last 14 years. Note that in all three subclasses, the proportion who self-identify as godless or “nones” has risen since 2007. Atheists have doubled (though they’re at a scant 4%) agnostics have risen 2.5-fold, and the “nones”—by far the largest segment of “not religious”—have nearly doubled. The total again: 29% of Americans are either nonbelievers or not particularly religious.

That’s good news, and the trend is going to continue over all religions in the U.S. (and in the UK and Europe). As for the other faiths, here’s what the survey says: 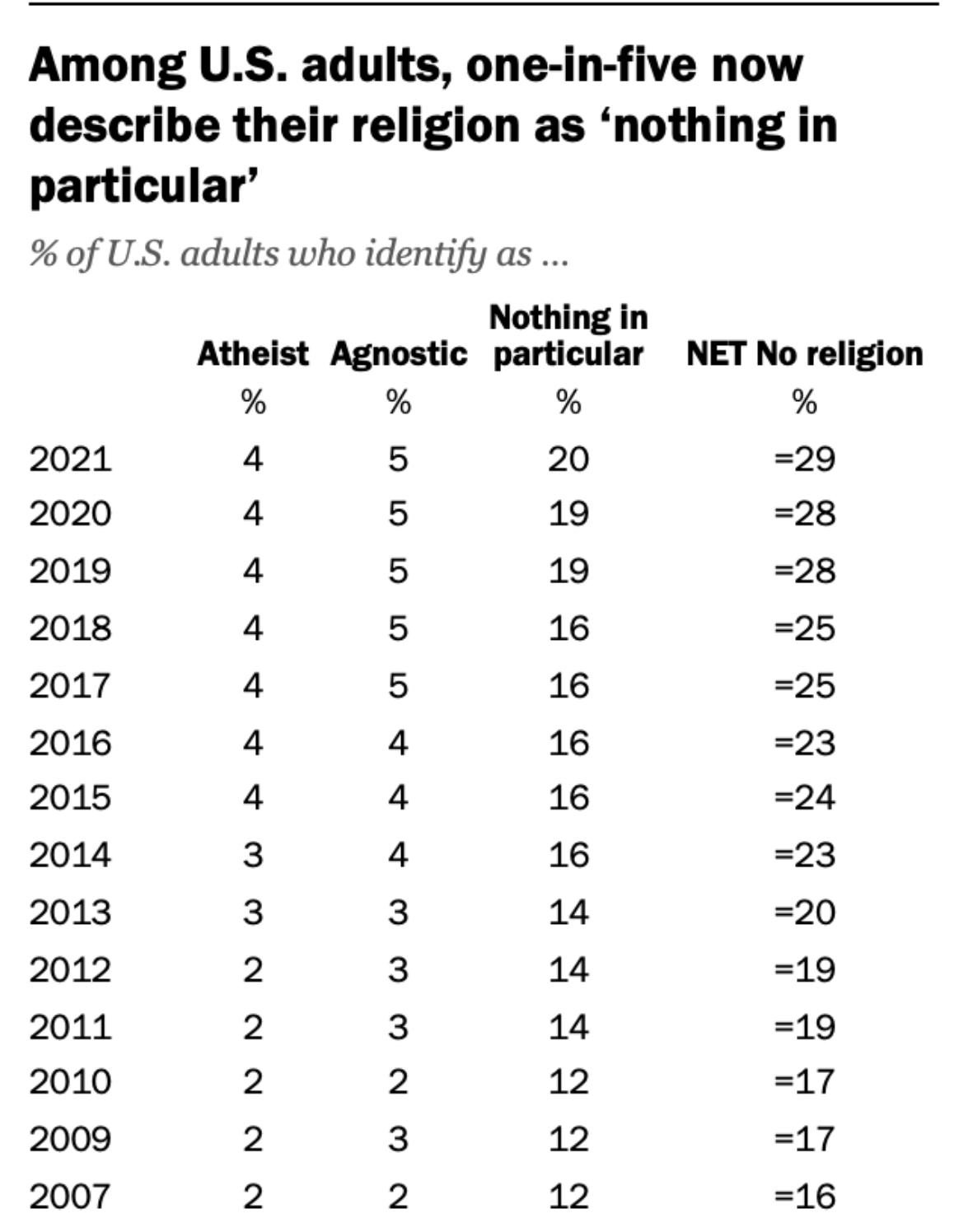 86 thoughts on “America is rapidly losing its religiosity”